How Many Polar Bears Are Left in the World?

Rumors that their numbers are climbing have been greatly exaggerated.

Ice is disappearing—and so are polar bears

In this the hottest decade on record, Arctic ice has been receding rapidly—much more rapidly than scientists anticipated, as a brand-new study co-authored by researchers at Rutgers University emphasizes. Species the planet over have been suffering the effects, polar bears not least among them. In fact, their overall populations—there are 19 distinct groups, most in Canada—are listed, internationally, as “vulnerable” by the IUCN Polar Bear Specialist Group. And although increased commercial activities, pollution, disease, inadequate habitat protection are also considered threats, the number one reason for the bears’ decline is the loss of sea ice due to climate change. These 12 polar bear pictures will melt your heart.

The myth of meaning in increasing populations

Back in 2007, information started circulating that two populations of polar bears in the Arctic actually had growing numbers, giving climate denialists fuel for claims that rising temperatures and melting glaciers posed no risk to this species. However, as New Scientist reported, the two populations in question, in Northeastern Canada, in previous decades had faced grave risk to their survival due to over-hunting. Protections granted to both the bears and their prey helped them rebound from the brink of collapse—a 22 percent loss over 17 years in one instance. Learn about 14 beautiful animals that could disappear in your lifetime.

Bears in trouble: A history

In fact, even before melting ice became a massive threat to northern-dwelling species, polar bears needed help. Several populations had already been “decimated” by 1973, according to WWF, causing Canada, the United States, Denmark, Norway and the former USSR to sign the International Agreement on the Conservation of Polar Bears and their Habitat to curtail commercial hunting. The United States also took the additional step that year of classifying polar bears under the Endangered Species Act. In 2005, the IUCN reclassified them, from “least concern” to “vulnerable,” where they remain today. An International Forum on Polar Bear Conservation, which convened in 2013, made new commitments to protecting this species.

Where the bears are

There are 19 distinct populations of polar bear throughout the world, most of which are in Canada; the rest reside along an icy band that straddles the United States, Russia, Denmark, Norway, and Greenland. As of 2019 IUCN data reported by WWF, four of those populations are in decline, five are stable, eight are considered data-deficient—i.e., information about how they’re faring is either missing or outdated. And, as mentioned earlier, two of those populations are increasing because of restrictions on hunting, although they are still subject to the stressors faced by other bears around melting ice, such as declining habitat and availability of food sources, leading to starvation, reduced weight, and cub fatalities. These 14 animals have gone extinct in the past century.

How many polar bears are there?

Current estimates for Ursus maritimus are a little wonky—no surprise considering that scientists don’t have solid information on eight populations. Most recent counts put them somewhere between 22,000 and 31,000 worldwide. A complication: previous population estimates were based largely, in some instances, on hypotheses. And of course, how each sub-populations is faring depends on where it is living, the conditions it’s encountering, and the ways it managed to adapt at least in the short term. Concrete data, based on marking or aerial surveillance is available for 14 populations, which IUCN counts put at 18,349; their estimates including the remaining five populations are for 25,000 bears. Find out the penguin species that could disappear by the end of the century.

The numbers, by region: The Arctic Basin

This region, which is pretty much dead center in the middle of the Arctic at the North Pole, is considered to be a sort of catch-all location for polar bears—a region that doesn’t fall within any particular country’s borders but where polar bears (no one is sure from which particular sub-populations—probably more than one) can be found. Data is insufficient here for scientists to have a read on how many polar bears reside here. However, summer ice is receding in the area, as in every part of the Arctic, and what ice there is is lasting less long into the spring and fall. All stats on this sub-population and others come from the IUCN’s Polar Bear Specialist Group. It’s not just animals that are in danger because of rising sea levels; these 13 islands could disappear in the next 80 years. 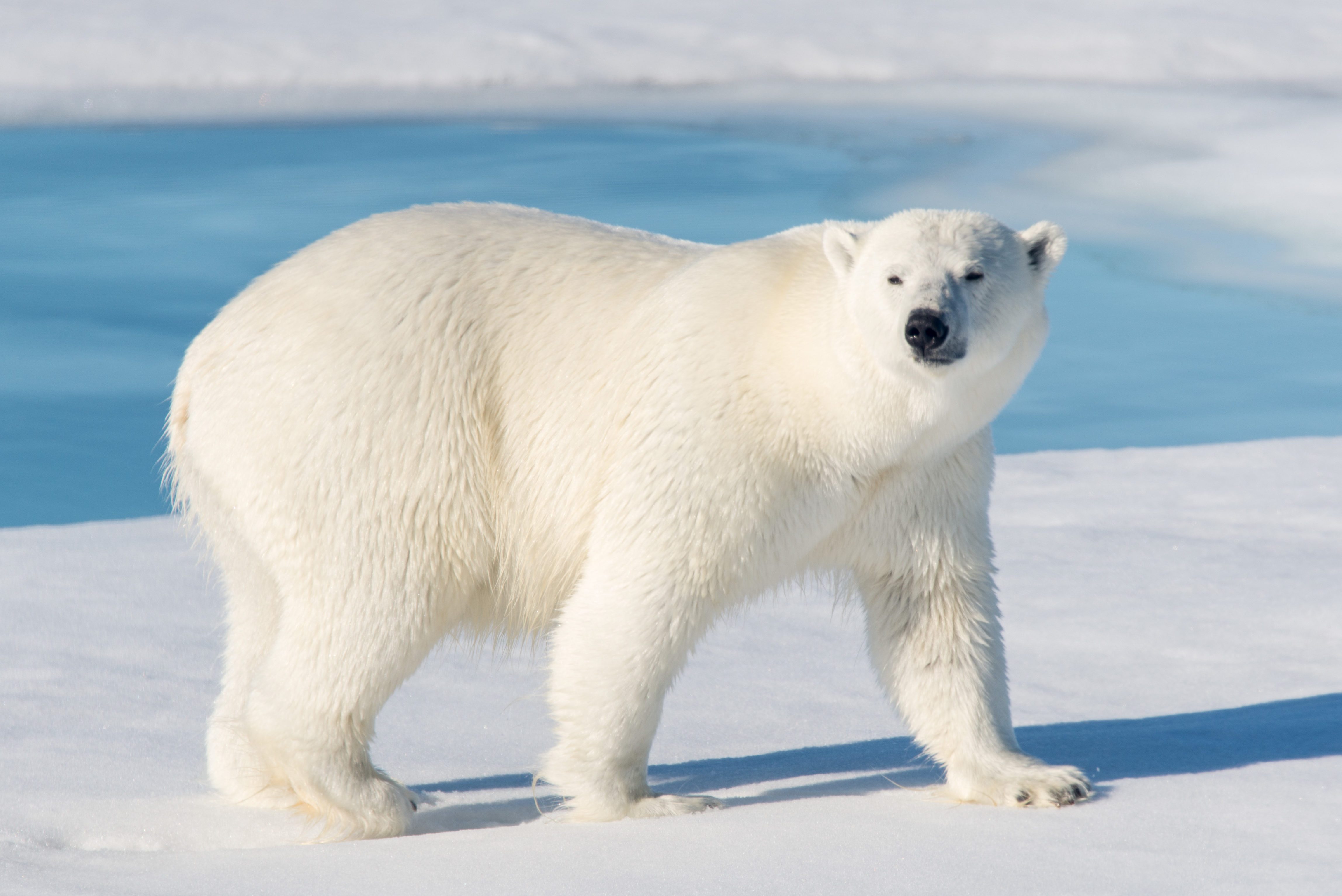 For the East Greenland polar bear population, numbers are, once again, unknown due to insufficient data. A study of their numbers is underway and scientists hope to release data in 2022—the count is the first of its kind for this sub-population, according to CBC. Female polar bears, along with their cubs, have been protected against hunters here since 2006. A new survey of Baffin Bay polar bears puts their numbers at 2,826—no one’s sure if this represents an increase or decrease in population size—while in Kane Basin, numbers likely increased from 1997 to 2014 to 357. Greenland—one of the best places to see the Northern Lights—was once owned by Norway but is now part of Denmark

The numbers: Russia and Norway

There are several bear populations within Russian borders—although some of these borders encompass parts of the United States and Norway as well. There is insufficient data for the Laptev Sea polar bears, as well as those in the Kara Sea region. In the Chukchi Sea, which borders both Russia and Alaska in the U.S., there were 2,937 bears counted as of 2016, with the population considered to be likely stable from 2008 to 2016. In the Barents Sea, straddling Russia and Norway, bears were likely stable from 2004 to 2015; when last counted in 2004 there were 2,644 of them. Animals in warmer climates are also vulnerable—find out how many elephants are left in the world.

Most polar bears live in Canada and the news about sub-population health varies from place to place. In Baffin Bay, Foxe Basin, and the Davis Strait, populations have likely increased, to 2,826, 2,585 and 2,150, respectively, with the latter population considered likely stable form 2007 to 2016. Similarly, in M’Clintok Channel, 284 bears are thought to be a population increase. There’s insufficient data for Viscount Melville Sound, which was thought to have 160 bears back in 1992; Norwegian Bay, where 203 bears were last counted in 1998; and Gulf of Boothia, where a new study got underway in 2015. Lancaster Bay had an estimated 2,500 bears back in 1998; this population is thought to be declining. In the Western Hudson Bay, an increase in numbers to 842 is accompanied by declining survival and birth rates. Like the polar bears, these 14 wild animals are also endangered.

The numbers: The United States/Canada

The future for polar bears

In brief: it’s not looking good. According to WWF, a single “last ice area” will exist by 2040 in Northeast Canada and Northern Greenland as a dwindling area where these fearsome predators will still be able to hunt as their species requires. Overall, scientists anticipate that by 2050, current polar bear numbers will decline by 30 percent. They join 23,250 species that the IUCN has assessed are threatened with extinction. Want to help? You can sign the Endangered Species Act and support WWF.