Can You Spot All 14 Iconic Constellations In These Pictures?

People have been seeing stories in the night sky for thousands of years—once you learn to find some landmark stars, the ancient characters will be more clear to you, too.

There are 88 official constellations—48 that were recorded by the Greco-Roman astronomer Ptolemy in the 2nd century and others that have were identified by European astronomers in the 17th and 18th centuries. This planisphere, or star locator, was created in Amsterdam by Frederik de Wit around 1680. You can see that the 12 constellations that double as signs of the zodiac lie around the edges—they’re on what appears to be the path of the sun around the earth (which we now know to be a trick of the eye as the earth rotates around the sun). Take a look at these amazing photos of the night sky taken from national parks.

It’s probably the most commonly recognized figure in the night sky, but the Big Dipper is technically not a constellation—it’s called an asterism, which just means a star pattern that’s easy to spot. Full-on constellations are the figures that have been officially recognized by the International Astronomical Union. The Big Dipper is a great starting point though because it’s visible from most of the northern hemisphere all year round and all night long. In the United Kingdom, it’s generally called the Plough; in Finland, it’s thought to look like a salmon net; and in China, Japan, and Korea, it’s a ladle. 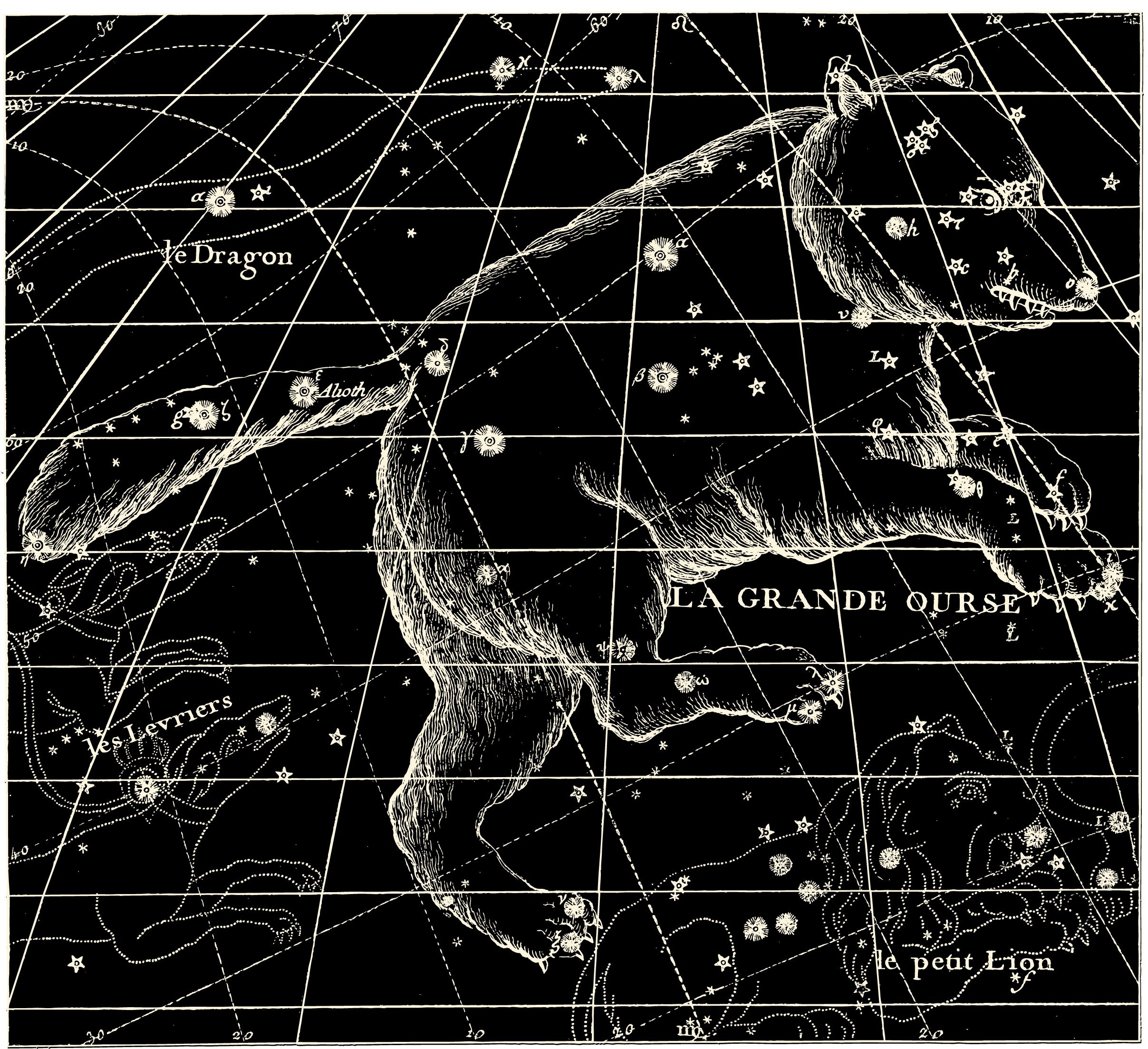 This is the easiest constellation to find because the stars of the Big Dipper are the Great Bear’s back end. Obviously, a lot of imagination goes into converting star patterns into recognizable figures. Note that you’re most likely to be able to see them if you’re looking from locations with little light pollution, like national and state parks, so lots of stars are visible; be sure to bring along a modern planisphere or a smartphone app that identifies celestial objects.  If you’re looking for more science fun, don’t miss these 18 science facts you never learned in school.

Once you’ve spotted the Big Dipper, follow the trajectory of the stars on the end of the scoop in a straight line until you find a bright star—that’s Polaris or the North Star. It lies more-or-less directly above the North Pole, so all the constellations will appear to be rotating around it over the course of a night. Polaris is the end of the handle of the Little Dipper, which acts as the flank and tail of Ursa Minor, or the Little Bear. According to Greek myths, he’s the son of Ursa Major—both were turned into bears and then constellations because of the mother’s dalliance with Zeus.

If you draw an imaginary line from the bowl of the Big Dipper through Polaris and beyond, you’ll get to the Queen of Ethiopia, identifiable because she looks like the letter W or M (she’s meant to be sitting in a chair). Cassiopeia and Ursa Major essentially circle each other around Polaris.

This asterism is most visible during June and July. Scan the eastern sky at nightfall for the brightest star, which is Vega. It’s part of a small constellation called Lyra, which is shaped like a parallelogram. The other two stars in the triangle are fairly far apart—one off to the left (Altair) and another up above. That’s Deneb, which stands as one end of the Northern Cross, also known as the constellation Cygnus the Swan. The other end of the long arm of the cross (and the swan’s head) lies about halfway between Vega and Altair, and the short arm (which also serves as Cygnus’s wings) crosses it perpendicularly. 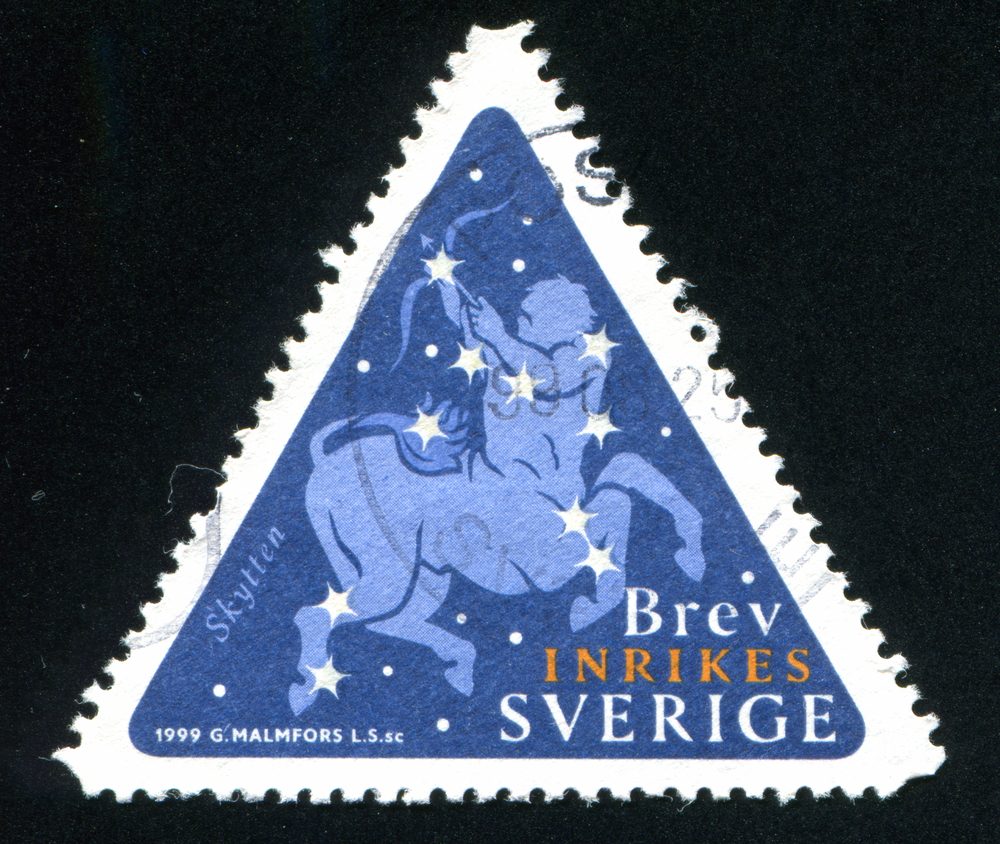 If you’re star-watching in a dark place far from city lights and can see the Milky Way stretching through the Summer Triangle like a sparkling cloud, follow the path of it south until you get to Sagittarius. The constellation represents an archer like the figure on this Swedish stamp, but it’s a little tricky to define in the sky without help from a smartphone app or star chart. This is what your zodiac reveals about your health.

It’s a little easier to recognize the asterism within Sagittarius that looks like a teapot, which you can make out on the left side of this photo. The archer is shooting the Scorpion that’s marked on the right side, with its tail curled up to strike. The orange star toward the head of Scorpius is Antares, and it’s one of the 20 brightest stars we can see from Earth—it’s a red supergiant that’s burned through all its hydrogen and is now fusing progressively heavier elements as it approaches the end of its life, when it will collapse and explode into a supernova.

At the beginning of fall, as the Northern Cross and the Summer Triangle move toward the western edge of the visible sky, you’ll be able to see this lovely small constellation more clearly. Shaped like a kite, one Greek legend says the dolphin helped Poseidon win over a sea nymph he wanted to marry and was rewarded with a place in the stars. 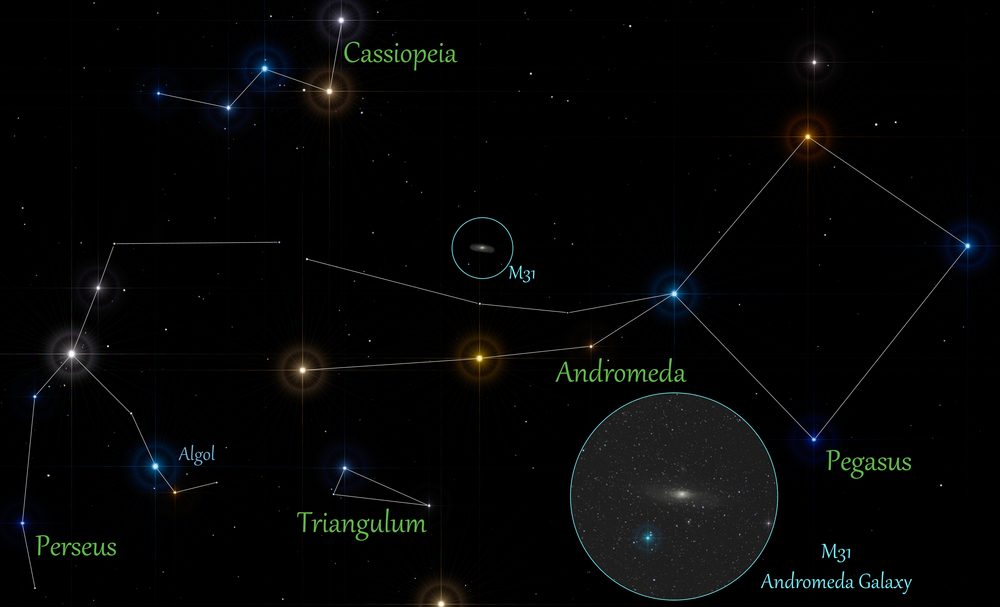 In Greek mythology, she was the daughter of Cassiopeia (who’s sitting in a W shape not too far away). The queen foolishly believed herself to be more beautiful than the sea nymphs, including Poseidon’s beloved, which made the sea god so angry he chained her daughter to a rock to be sacrificed to a sea monster. Perseus intervened, slayed the monster, and married Andromeda. When she died Athena honored her with a spot in the sky. And what a spot—the constellation includes the Andromeda Galaxy, which is one of the few galaxies that can be seen with the naked eye (though it looks even better through binoculars). Discover the 17 science “facts” that are actually not true. 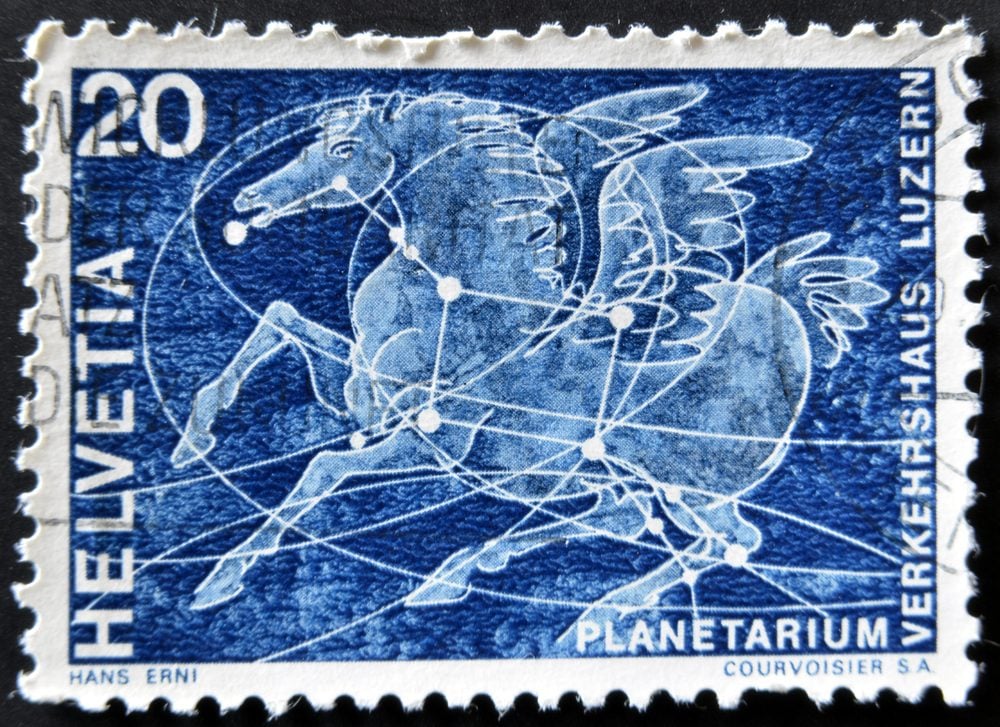 The clearest feature of the Pegasus constellation is the large square that makes up its body. These four equally bright stars are visible starting in September; if you trace a trajectory from Polaris through the top of Cassiopeia, that line will lead to Pegasus. When Perseus rescued Andromeda from the sea monster, he rode the flying horse, which is how it earned its position in the stars.

During winter in the northern hemisphere, you might not feel like braving the cold to check out the stars, but that’s the best time to see one of the most notable and easy-to-spot constellations. You’ll find Orion by looking for the three bright stars that make his belt, along with the string of stars that come down from the belt to form his sword. Once you know what you’re looking at you’ll be able to see the body and shield. Find out the 24 astronomy facts you never learned in school. 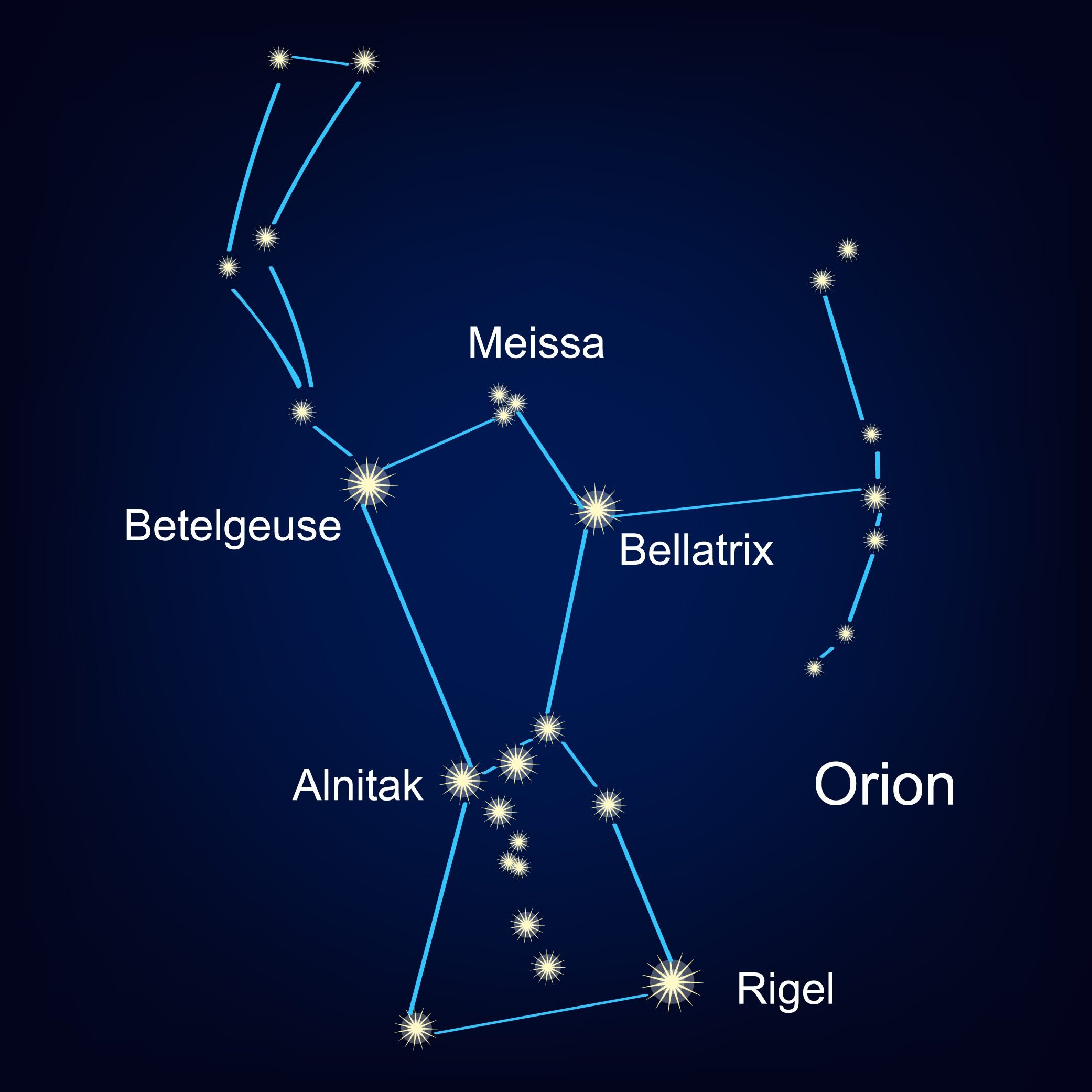 The constellation’s main stars are bright blue giants or supergiants, except for Betelgeuse, Orion’s right shoulder, which is a red giant and one of the biggest stars we know of. About halfway down his sword, one of the bright spots you see isn’t a star at all, but the Orion Nebula—a cloud of gas and dust about 1,500 light-years from Earth and 30 to 40 light-years across, where new stars are being born.

Orion is accompanied in the sky by his hunting dogs—Canis Major is the easiest to see, directly to the left of Orion in this photo. It includes the brightest star in Earth’s night sky, Sirius, which is also sometimes called the Dog Star—now you know why! Canis Minor, Orion’s little hunting dog, is harder to identify, but tags along nearby.

The bull is most easily spotted by looking for the giant red star Aldebaran, which is part of the V-shaped figure that makes its face. The constellation sits just beyond Orion’s shield. On the other side of the bull’s face (sitting over its shoulder) is a star cluster called the Pleiades, or Seven Sisters, which actually contains thousands of stars. Read about some mysteries of the universe astronomers still haven’t solved.