12 Iconic Photos from When Same-Sex Marriage Was Legalized

On Friday, June 26, 2015, the U.S. Supreme Court declared that same-sex marriage was legal. This ruling has forever changed the lives of Americans. 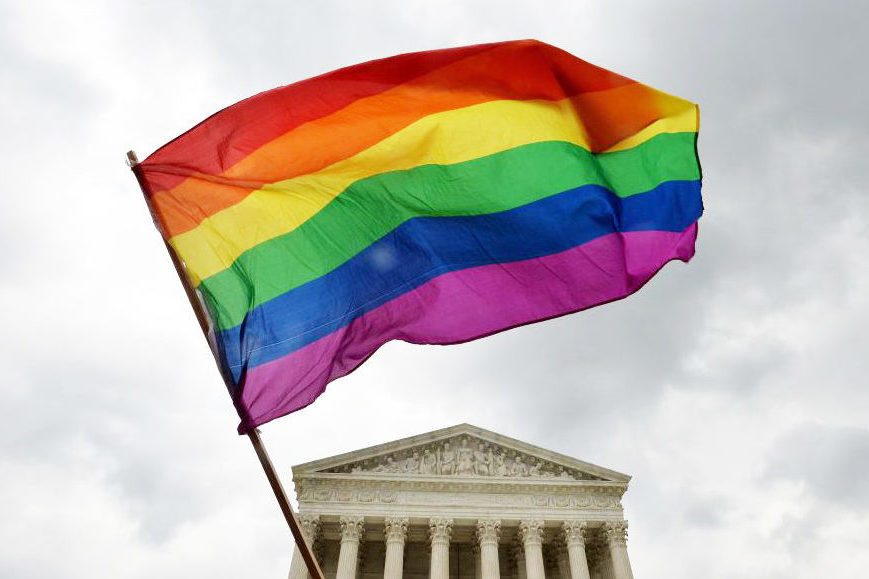 In a groundbreaking case five years ago on June 26, 2015, the U.S. Supreme Court declared that same-sex marriages were now legal across the United States. With a 5-4 ruling, this case, Obergefell v Hodges, was hailed as a “victory of love” and forever changed the lives of millions of Americans and people around the world. This vote was a huge victory and a cause for celebration for the gay rights movement. Read on to see beautiful photos that will forever show that love is love—and don’t miss learning about the Stonewall Riots and why they were so important. 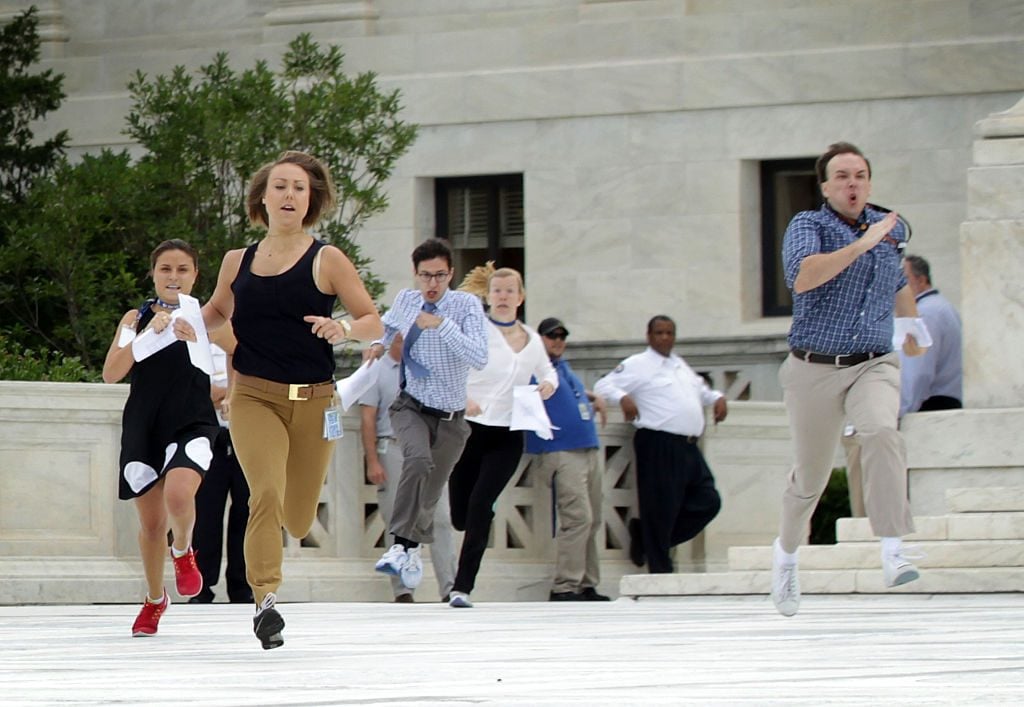 On Friday, June 26, 2015, interns in Washington, D.C. race against the clock to deliver the same-sex marriage opinion to their colleagues after the U.S. Supreme Court ruling. This is just one of the things that your kids will learn in school that you didn’t. 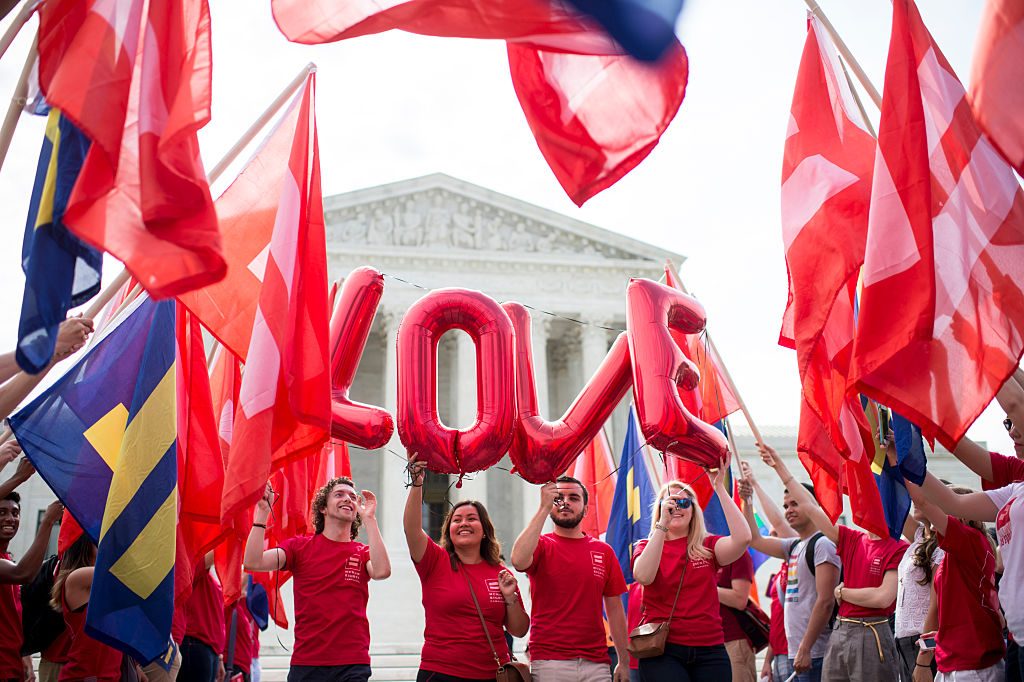 June 25, 2015 was a day that changed American life forever. Holding up balloons that spell out the word “love,” marriage equality supporters wait outside the Supreme Court and walk along an aisle decorated with equality flags awaiting the court’s decision. Here’s how the rainbow became associated with gay rights. 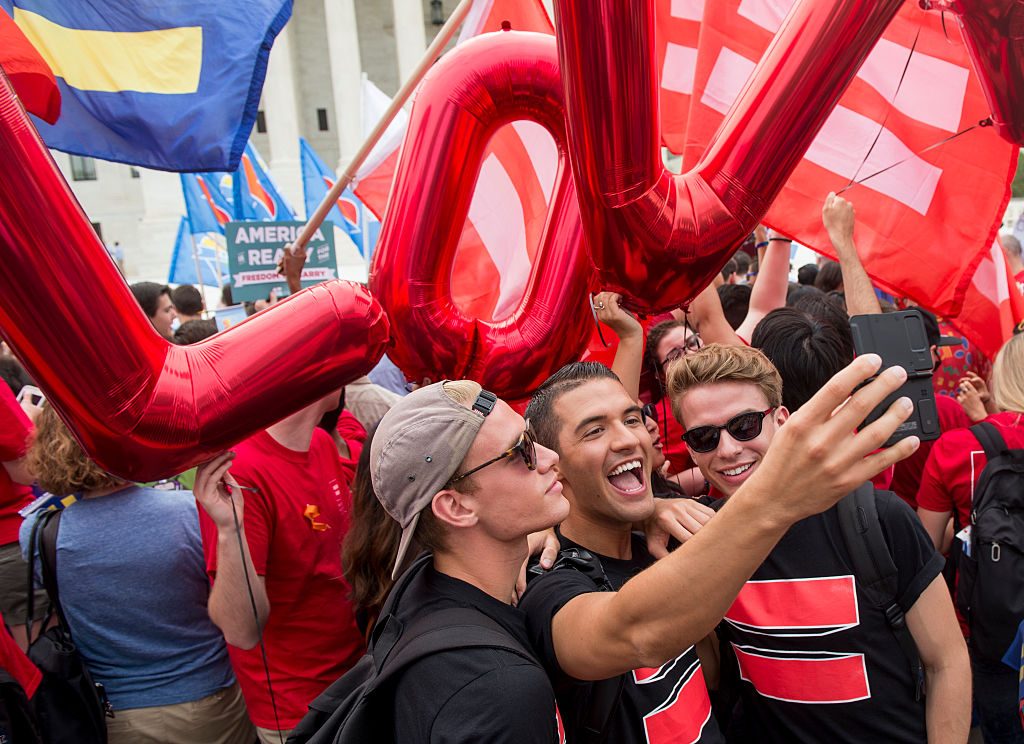 In front of the Supreme Court, supporters of same-sex marriage take a video selfie as they wait for the court to legalize same-sex marriages nationwide which will forever change the lives of millions of Americans. Here are just a few mind-blowing facts about selfies that you might find relevant to your life. 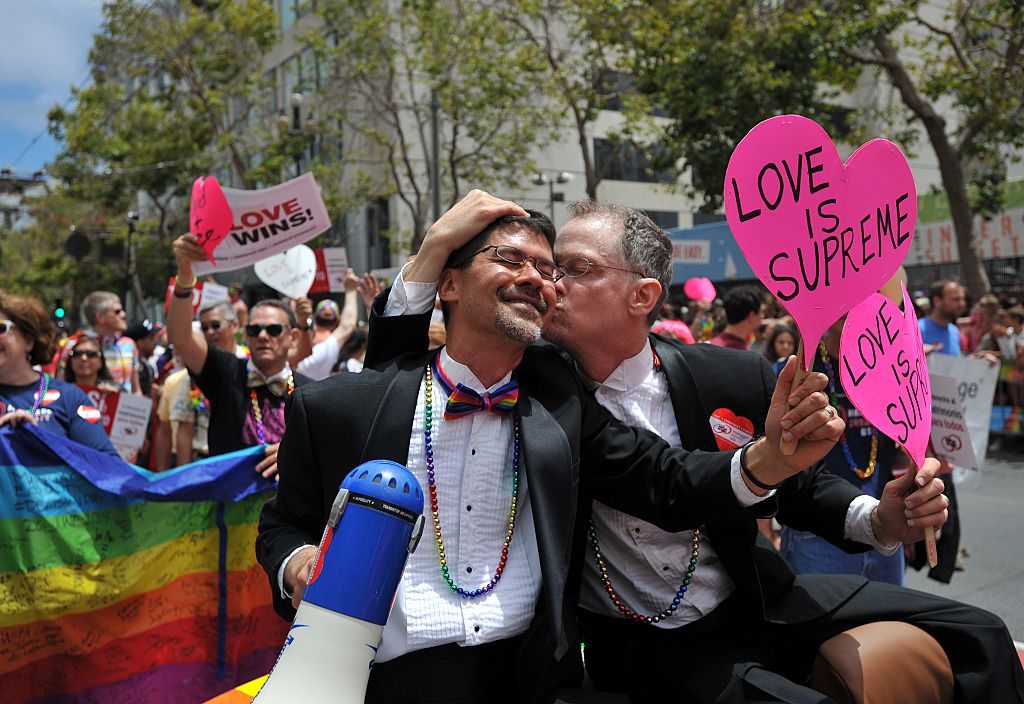 The U.S. Supreme Court ruling was one of the most important cases of modern history. Outside City Hall in San Francisco, California, Stuart Gaffney (left) and his husband John Lewis (right), hold up a pink heart-shaped sign reading “Love is Supreme” after the U.S. Supreme Court ruled that same-sex marriage was legal in all 50 U.S. states. Lewis and Gaffney were plaintiffs in the 2008 Defense of Marriage Act (DOMA) case. Don’t miss these 12 iconic photos from protests that changed American history. 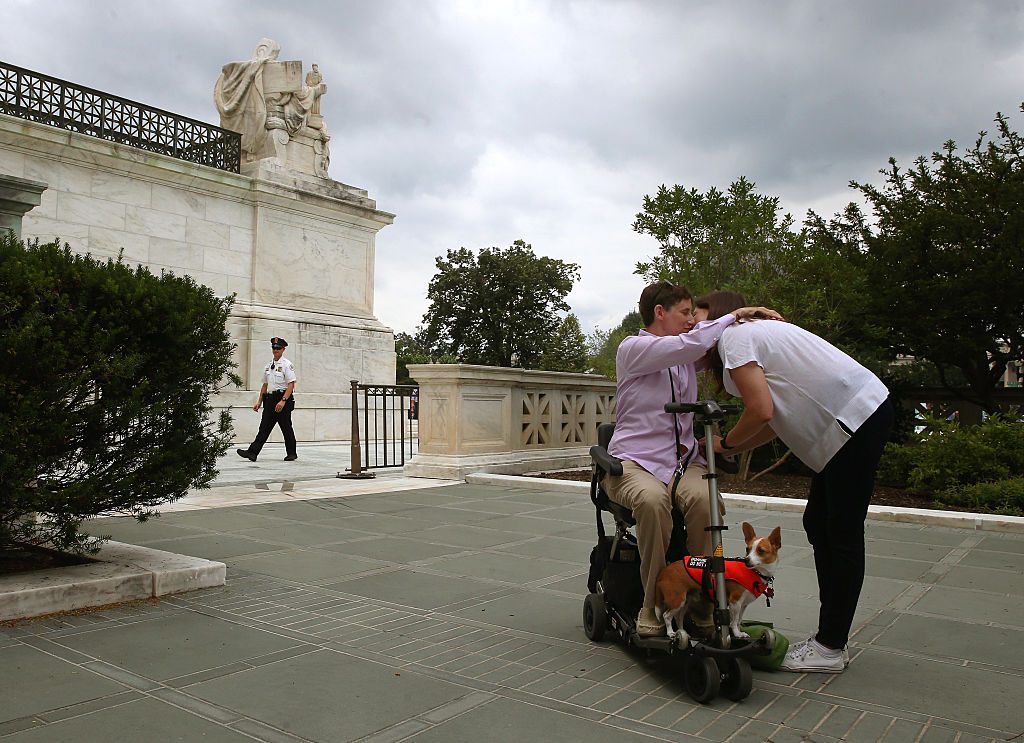 A constitutional right to marry

On Friday, June 26, 2015, Frances Stevens (left) and Jen Rainin embrace after the same-sex ruling outside the U.S. Supreme Court in Washington, D.C. Check out these 15 interesting facts and figures about the U.S. constitution. 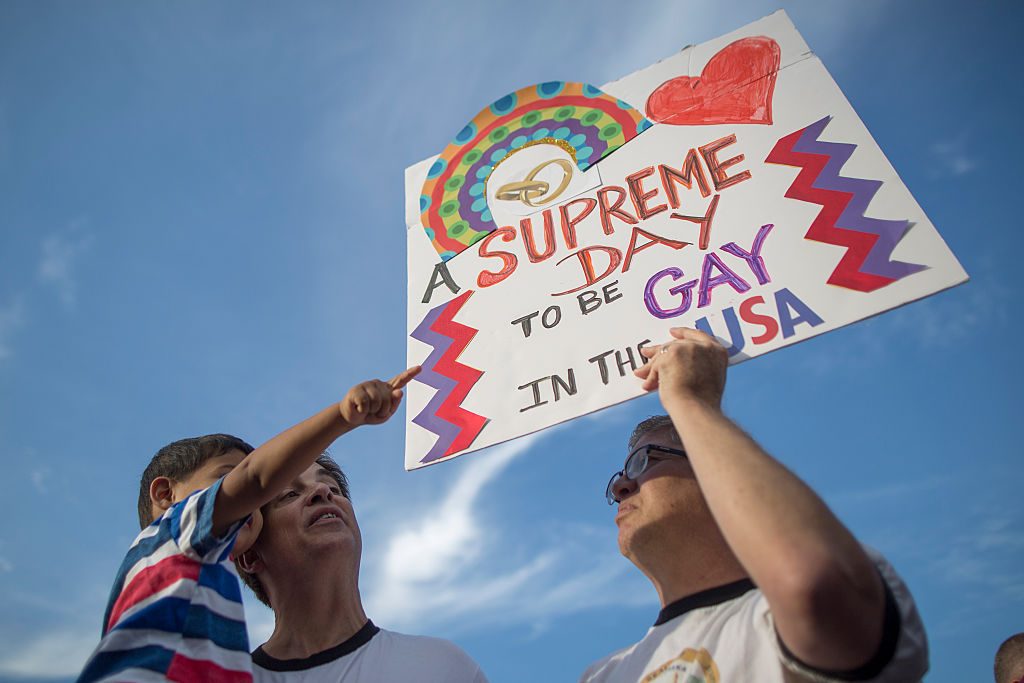 At a celebration of the Supreme Court ruling on same-sex marriage, Steve Ledoux and Mark Beckfold (right), who are married, hold their foster son and a sign on June 26, 2015 in West Hollywood, California. 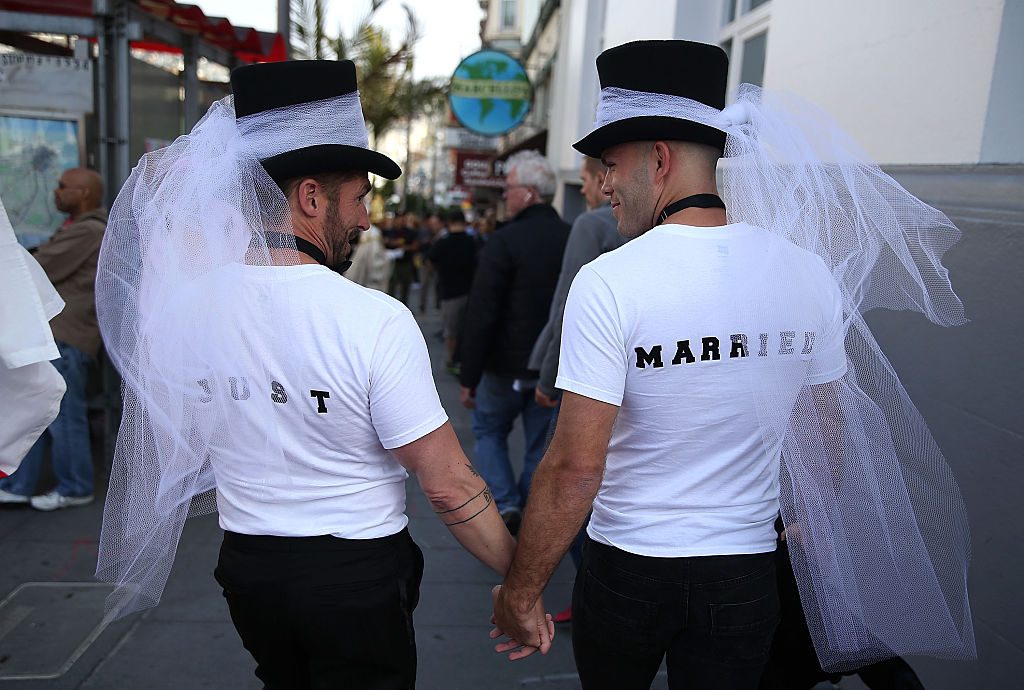 A time to celebrate

While celebrating the U.S. Supreme Court ruling, same-sex marriage supporters wear shirts with the words “just married” as celebrations continued across the country. Here are 14 quotes about democracy that will encourage you to get out and vote. 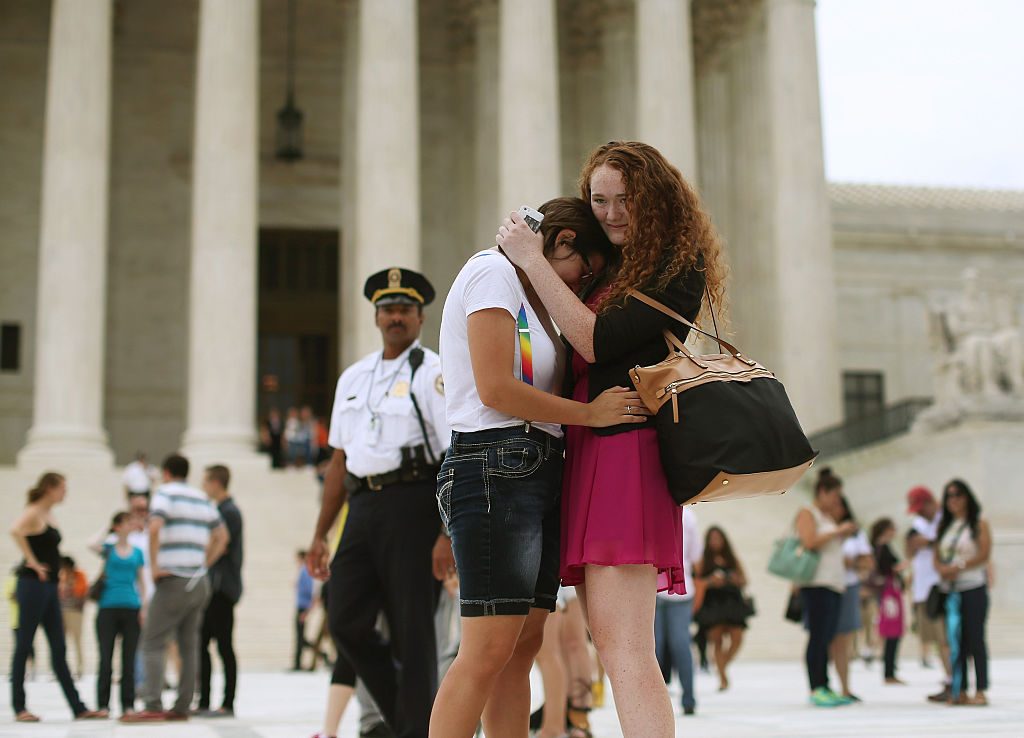 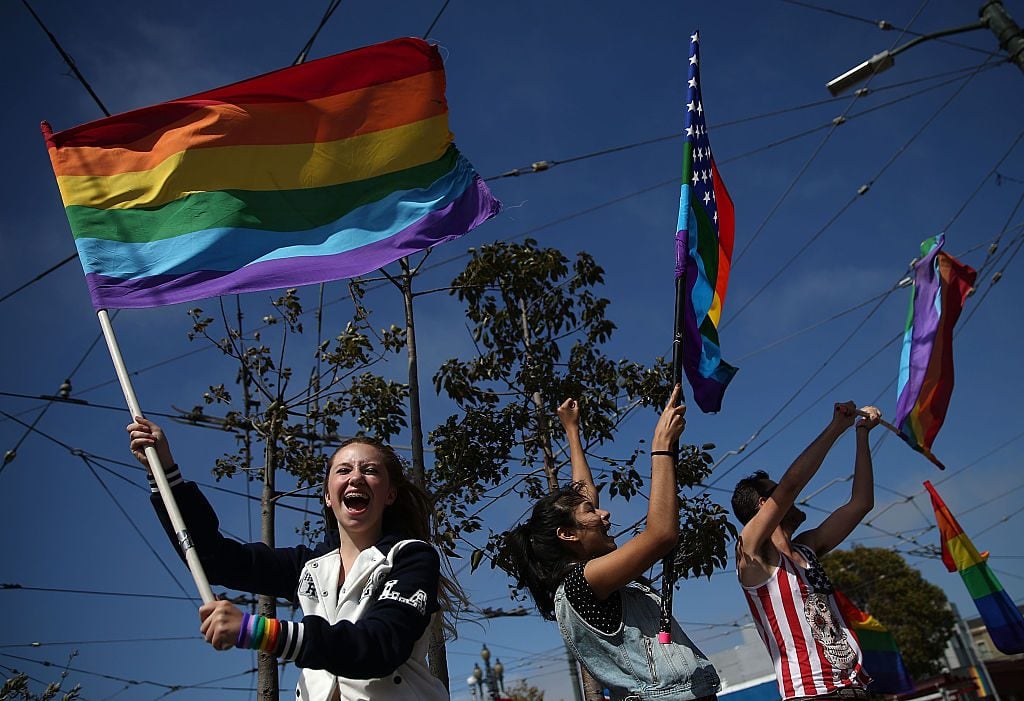 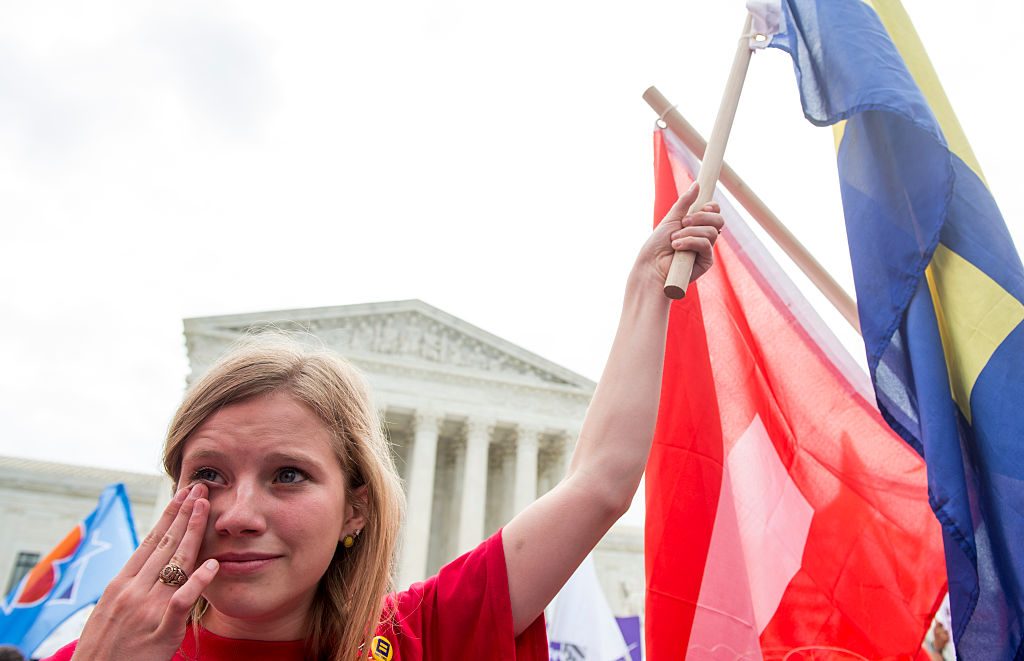 June 26, 2015 will be remembered as a monumental day. After the U.S. Supreme Court legalized same-sex marriage, supporters openly expressed their emotions including Madeleine Troup, of Houston, Texas, who wipes away tears of joy after the announcement. This is what a body language expert has to say about these 11 iconic photos. 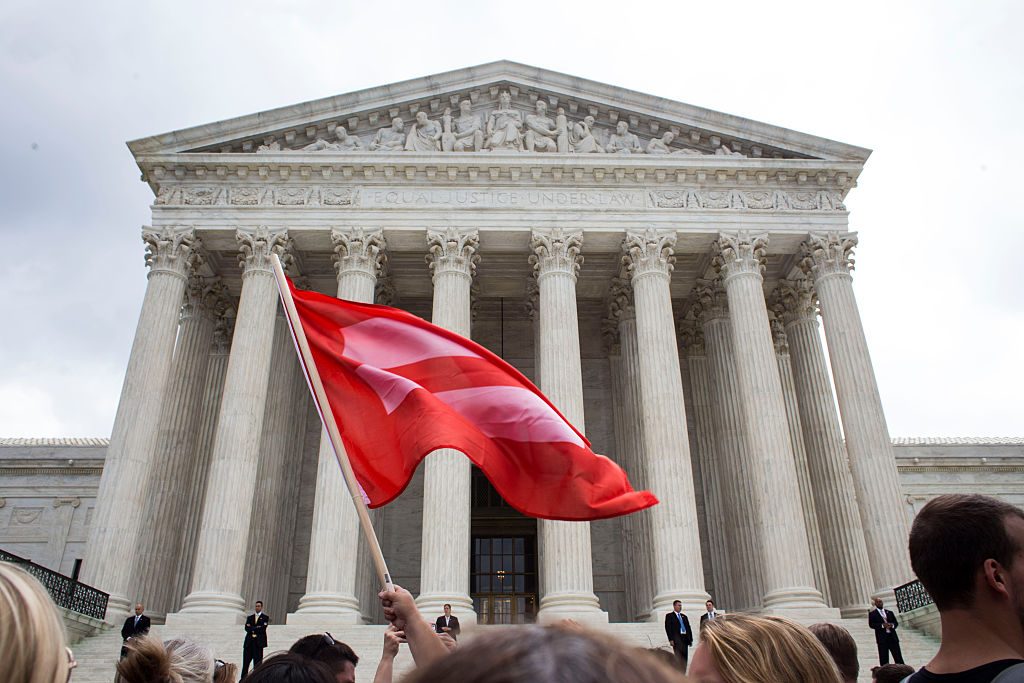 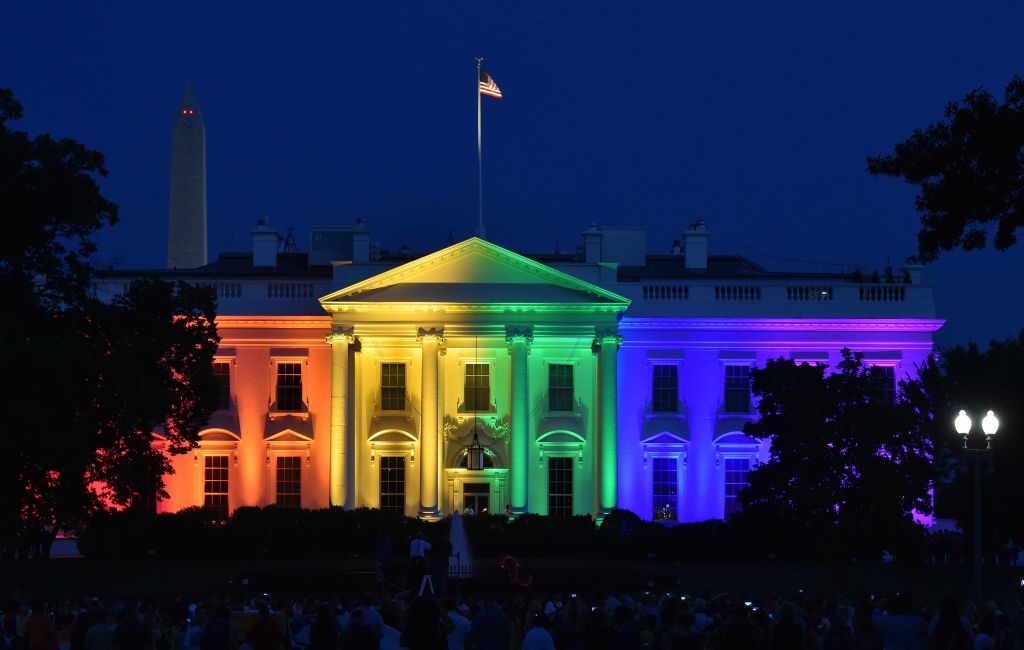 A “victory for America”

Rainbow-colored light illuminates the White House in Washington, D.C. on Friday, June 26th, 2015, the day that the Supreme Court ruled that gay marriage is legal nationwide which, as former U.S. President Barack Obama said that day, is a “victory for America.” Next, here’s the true story behind 23 of the most iconic photos in American history.