From themed parties with a karaoke machine to impromptu car rides, we can't get enough of singing along with our favorite tunes. So naturally, there is a slew of karaoke world records in existence. 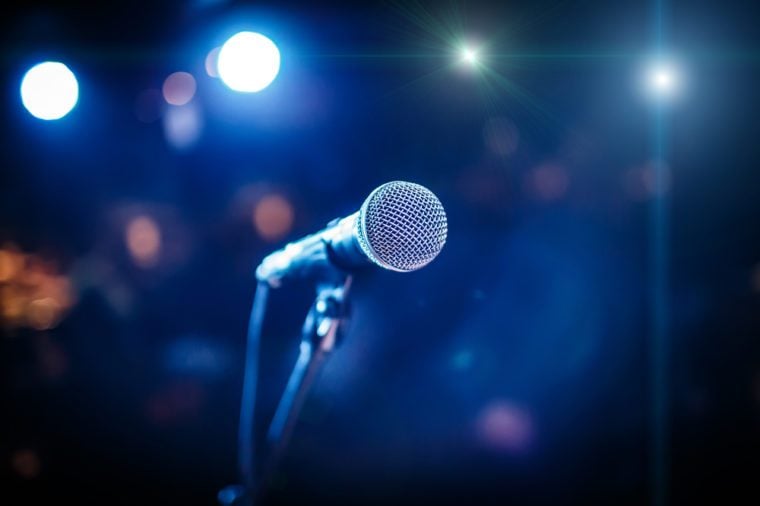 On September 23, 2011, Leonardo Polverelli completed the longest marathon karaoke session by an individual, as documented by Guinness World Records. He sang his heart out for a whopping 101 hours, 59 minutes, and 15 seconds as the Astra Caffe in Pesaro, Italy. The event was held for a charitable cause, with Polverelli belting out a grand total of 1,295 songs. Find out what your favorite type of music says about your personality. 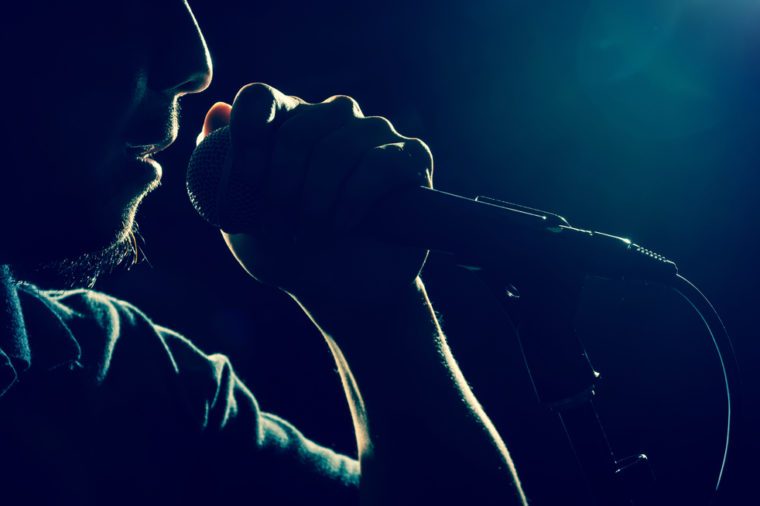 When you have a little help from your friends, all things are possible. A group from Changchun, Jilin, China sang karaoke for an impressive 792 hours and 2 minutes straight from May 22 to June 24, 2014. The event was organized by the Chinese company Guangqi Honda Automobile Co. If only Guinness recorded which songs these ambitious folks sang for that long. We might have suggested, “The Song That Never Ends.” These 2019 world records make this record seem tame. 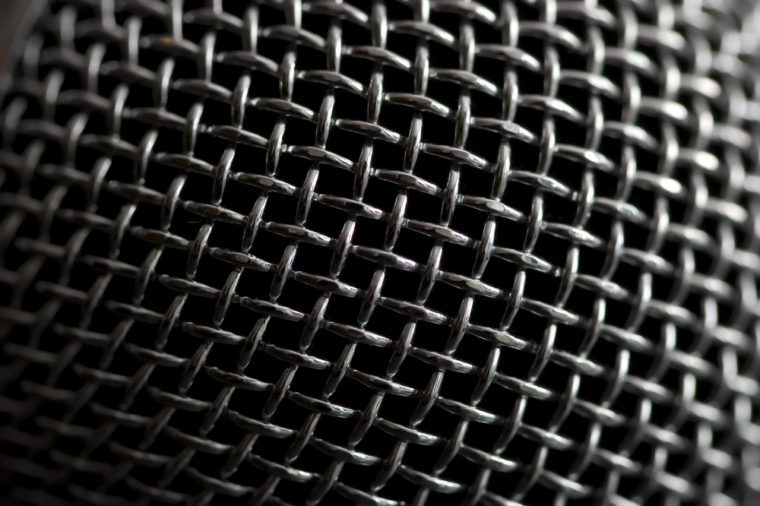 On August 22, 2009, Guinness World Records took note of the largest karaoke to ever exist. An overwhelming 160,000 people got together at Bristol Motor Speedway in Bristol, Tennesse to sing the Garth Brooks tune “Friends in Low Places” at the exact same time! The record was set ahead of the NASCAR Sharpie 500 race. Check out these amazing hidden health benefits of music. 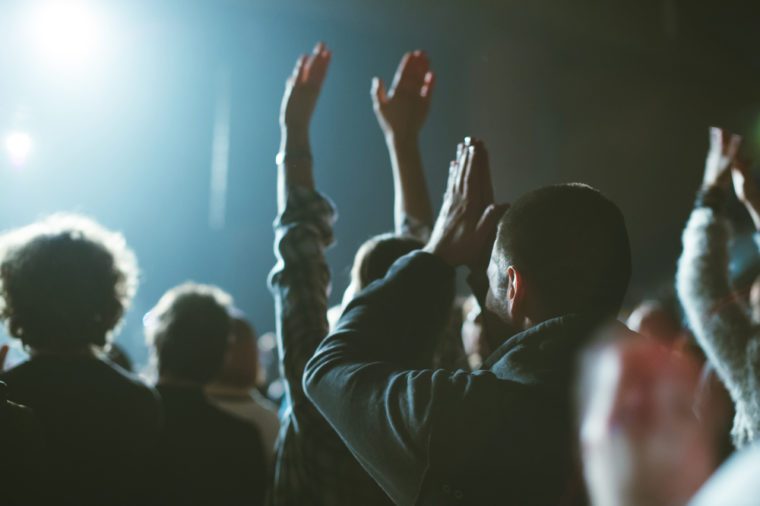 Journey’s powerhouse jam “Don’t Stop Believin'” may have originally been recorded 1981, but it continues to be used in movies, TV, and pop culture today. While this record hasn’t been confirmed by Guinness, it’s reported by Record Setter that 121 concert attendees at the Treasure Island Music Festival in San Francisco established the largest group rendition of the song on October 17, 2009. Hey, we believe it. Get a look at the hilariously bad original lyrics of some of your favorite rock songs. 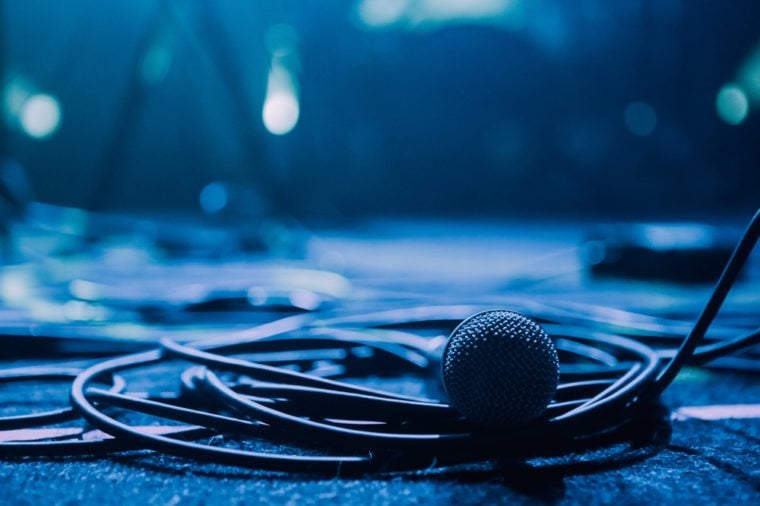 The hardest karaoke song in the world

No, it’s not Mariah Carey’s “Dream Lover” with all those hard to hit high notes, but rather the ditty created to promote Iceland’s A-Z tourism campaign that contains 13 super twisty Icelandic words. “Iceland’s native language is among the most difficult in the world to learn,” wrote The Mirror’s Andrew Gilpin. “Since humans first arrived in the country in around 874, only just over one million people globally have learned it.” We’ll pass on that one. 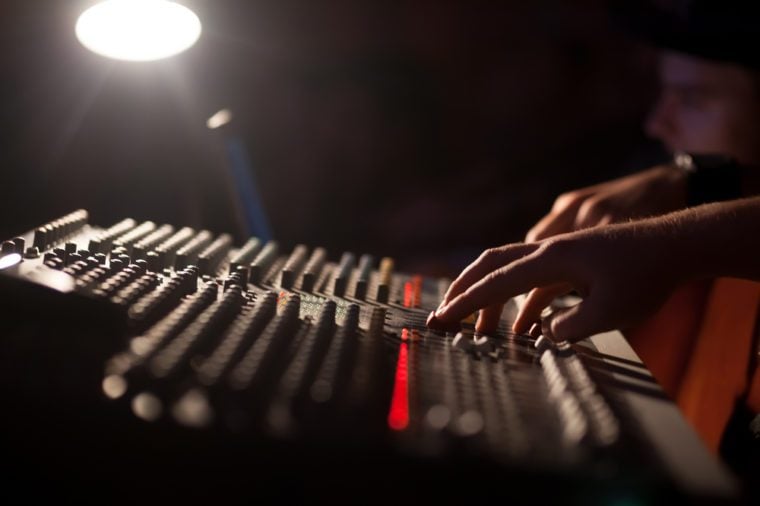 There is a seemingly endless number of songs out there, thousands of which are completely karaoke-worthy, but chances are if you like to sing, you have your own personal favorites. According to Singing Machine, the most requested karaoke song in the world is Michael Jackson’s “Billie Jean,” proving that while he may be gone, his music will always live on. Here you can learn little-known facts about some of the greatest songs of all time. 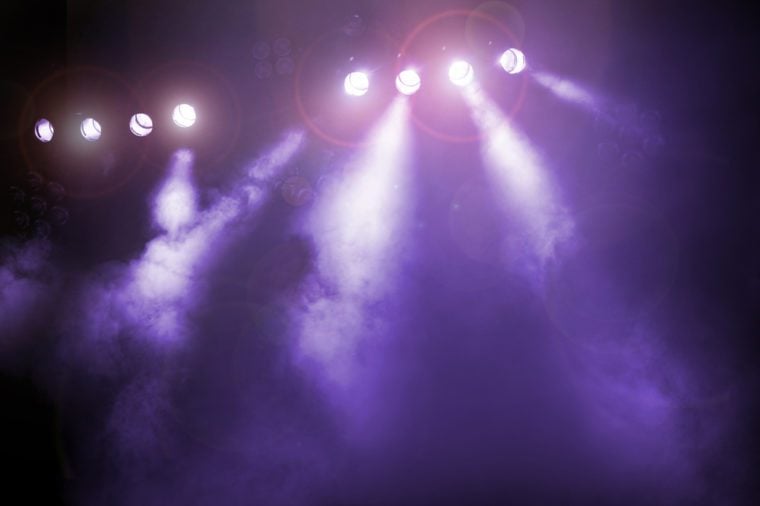 Suresh Joachim, a 38-year-old from Mississauga, Canada, took his passion for “The King” to a whole new level when he set a world record for the longest non-stop Elvis impersonation. He sang, sneered, and swiveled hips for 55 hours, making his way into the Guinness World Records for the feat, according to the Toronto Star. The song that kicked off the lengthy set? “Heartbreak Hotel.” 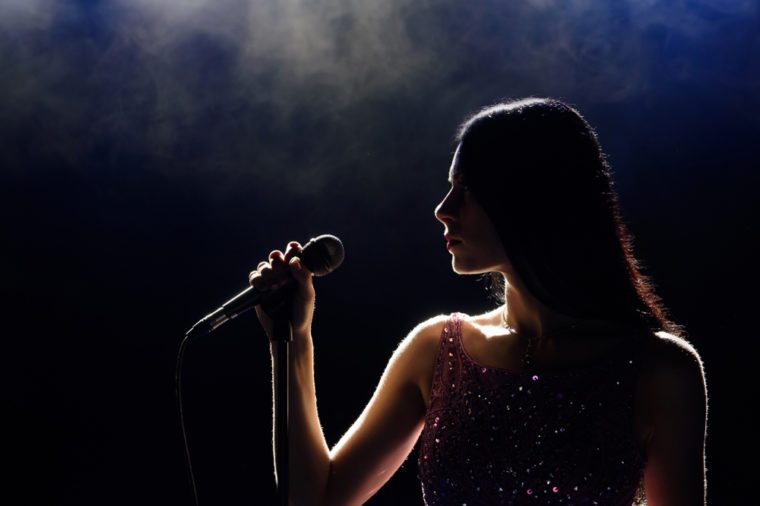 Move over Grammys, amateur singers have their own prestigious awards—the Karaoke World Championships. The very first competition to find the best karaoke crooner in the globe launched in 2003, with contestants from only seven different countries battling it out for the crown (the following year 14 countries participated). England’s Uche Eke was the first male singer to win the title while Danni Cadby (also from England) won in the women’s category. This is why you get goosebumps when you listen to good music. 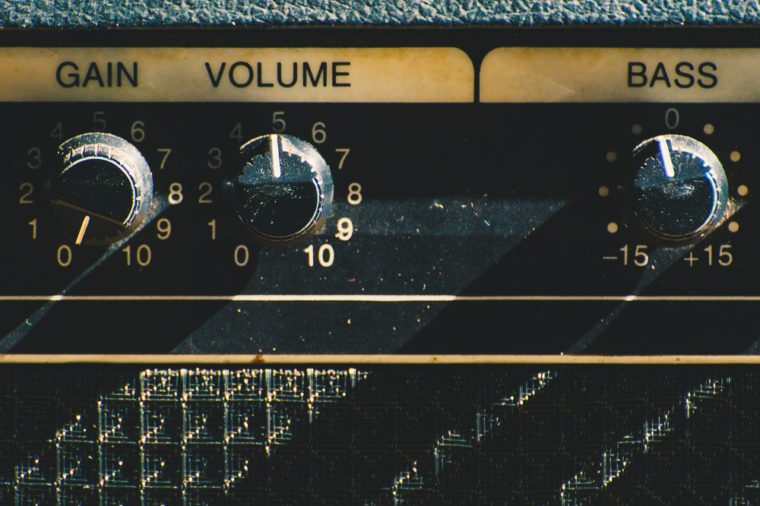 Today, karaoke machines are readily available, with many affordably priced so you can host your own at-home karaoke party. The world’s first machine was invented by a man named Daisuke Inoue in 1971. Inoue was a former drummer, and at the age of 31 plugged an eight-track tape player into an amplifier to create the first karaoke system. Simple but so cool! 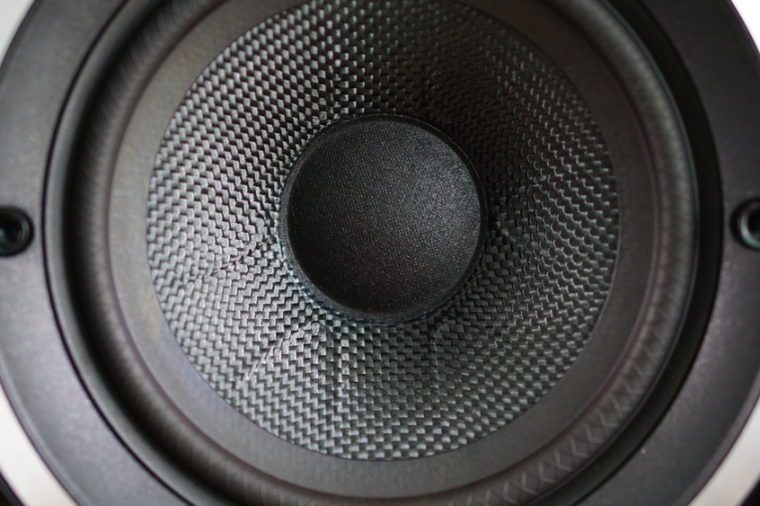 It wasn’t until 2017 that the Karaoke World Championships finally created two junior divisions so that those under the age of 18 could finally compete. That year Laura Ahonen of Finland took home first place in the kids’ division while Alina Karvanen, also from Finland, took the crown in the teen category. As it turns out, all six finalists in the Junior division hailed from Finland, which was home to the contest in 2017. Bet you didn’t know you can actually learn while you sing—here are 15 impressive words you’ll get to know from Disney songs. 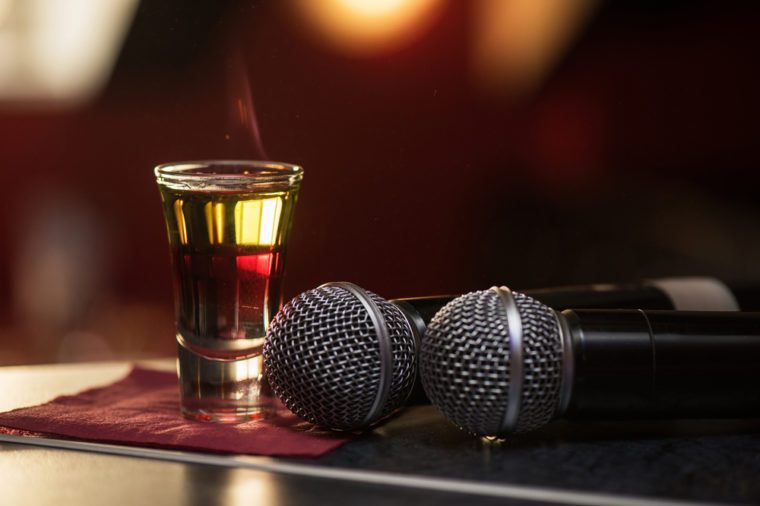 Believe it or not, you won’t find the world’s most expensive karaoke machine at a party or even a fancy club. ABC News reports that it was developed by the Beckman Institute in Illinois in an effort to capture the movement of the muscles the human body uses while singing! It works by a person lying inside an MRI scanner while singing into a noise-canceling microphone as the machine snapped pictures at over 100 frames per seconds. The lyrics are projected onto a screen at the top of the machine. Music and science? We’re all in. 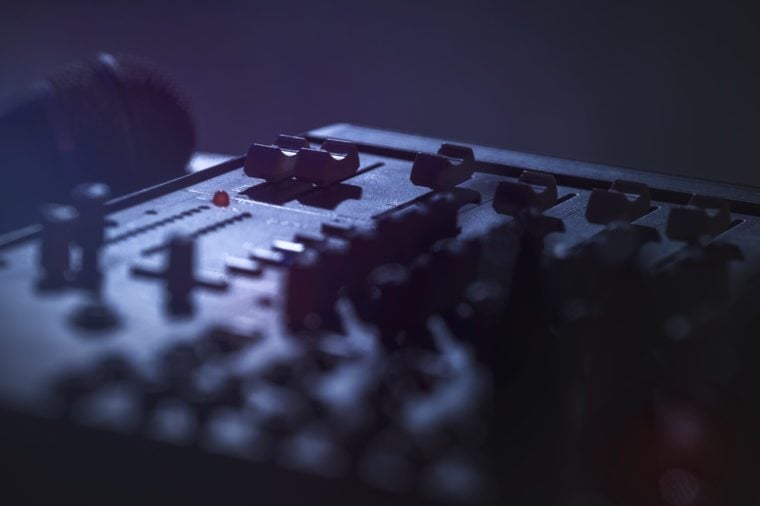 Japan may be known as the original home of karaoke, but Finland sure is crazy for the musical activity; the country holds the world record for hosting the biggest karaoke show. It took place in 2006 in the city of Helsinki, attended by 80,000. The audience all sang together, making it a group effort to set the record. Read on to find out which surprising songs are banned from karaoke.