Whether it's their voluminous fluff, chunky bodies, or strapping muscular physiques, these cats are the adorable heavyweights of cat breeds. 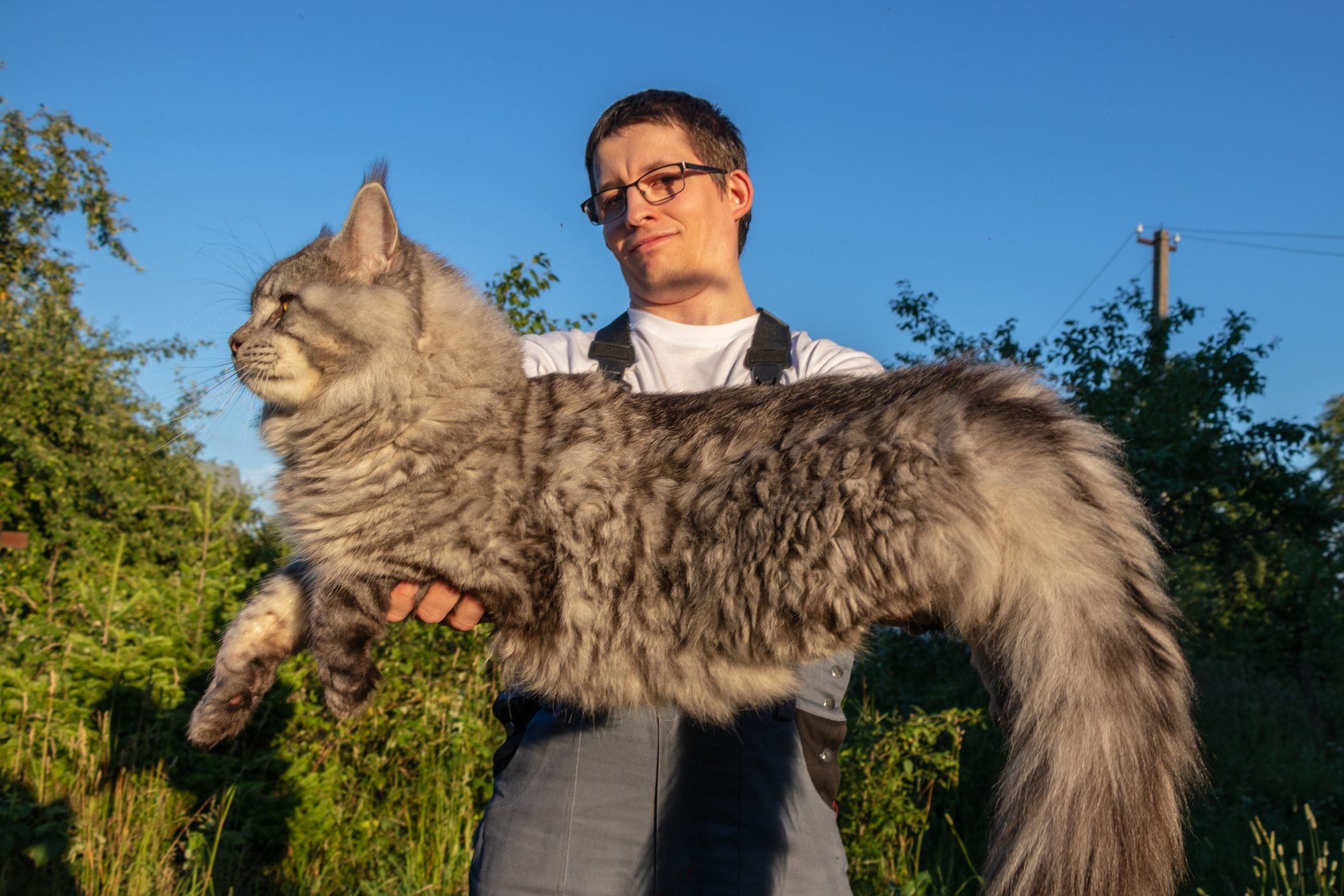 To be clear, large cat breeds aren’t chubby by definition. According to Purina, there is no such thing as “average cat weight.” Veterinarians consider factors such as breed, sex, spayed and neutered status, and body condition score. By nature of their breed, these cute kitty cats are large and in charge—and will melt your heart. Here are 17 other bizarre and interesting things about cats you didn’t know. 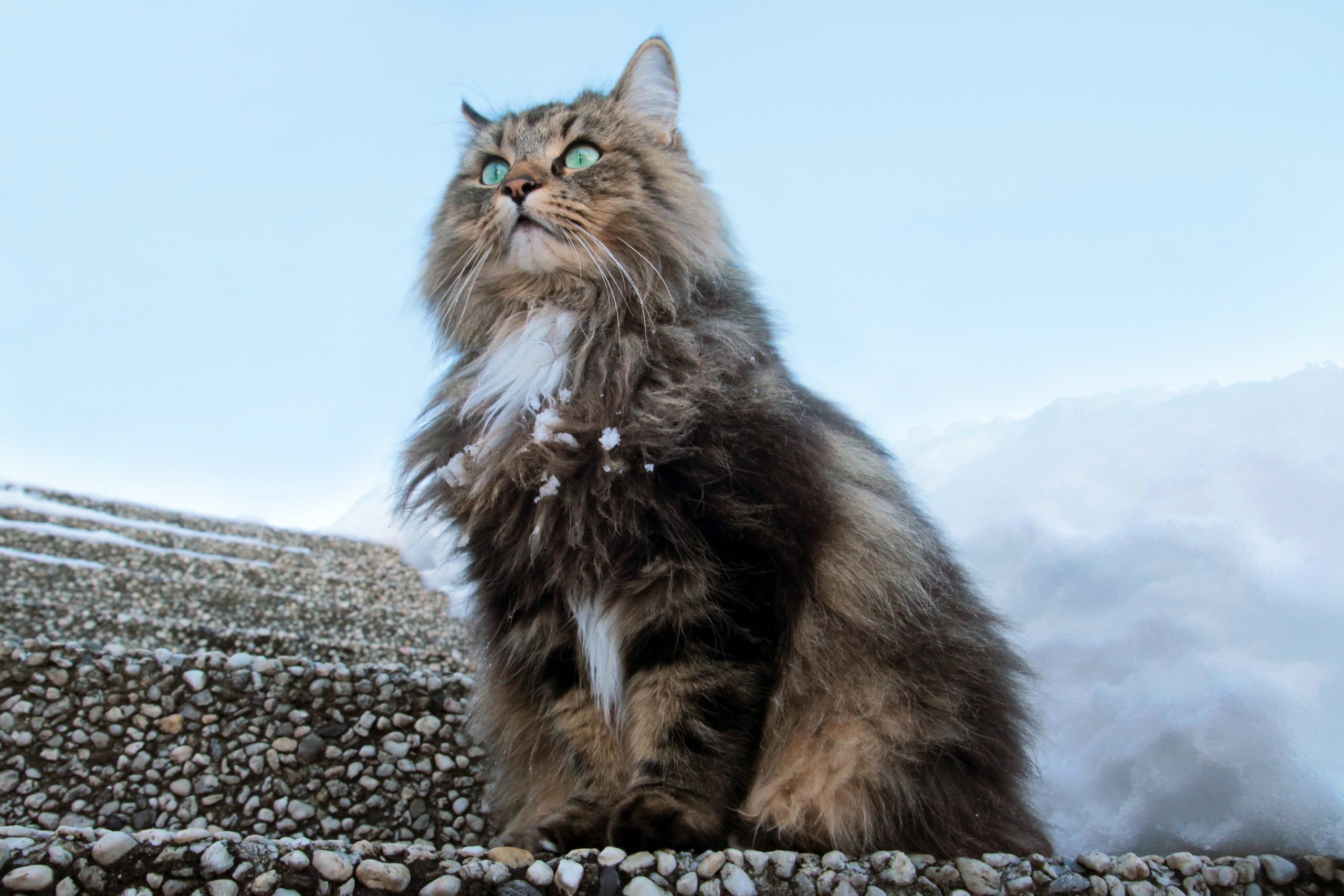 This lusciously fluffy large cat breed hails from Norway, where it is known as the Skogkatt, which translates to forest cat. With all four paws on the scale, it weighs between 12 to 16 pounds, but it looks heavier with its abundance of fur. “The dense coat that keeps [these cats] warm and dry during the northern winters is so water-resistant that it’s often difficult to bathe them for show,” says Teresa Keiger, cat breeder and Cat Fanciers’ Association (CFA) judge. By the way, the Norwegian Forest Cat is the only cat that can climb down a tree headfirst (most cats inch their way down backward or wait for you to rescue them); Keiger says this talent is possible because their front legs turn out just slightly. Here’s how to bathe a cat without getting clawed. 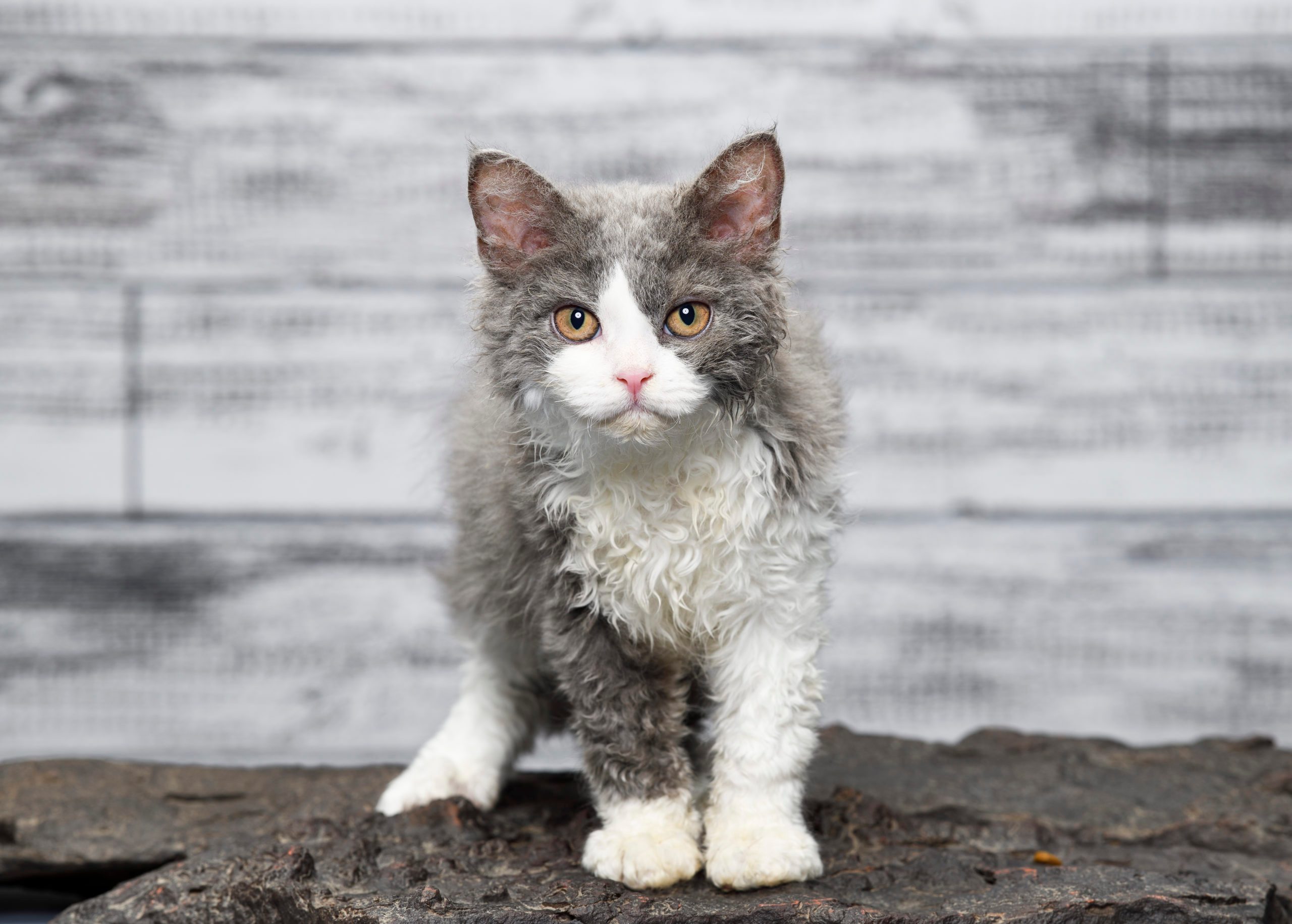 The Selkirk Rex is a curly-haired large cat breed that looks like a cuddly teddy bear or snuggly sheep. Its origin is almost as unusual as its “wash-n-wear” fur. “This curly-coated cat is a spontaneous mutation originally found in a shelter [in] Montana,” says Keiger. Selkirks are very affectionate and happy to park their 16 pounds of cuteness of your lap and follow you to the kitchen for a snack. “Gentle and loving, the Selkirk Rex gets along great with people and other pets,” says Keiger. These are 12 other outgoing cat breeds that love to hang out with canine siblings. 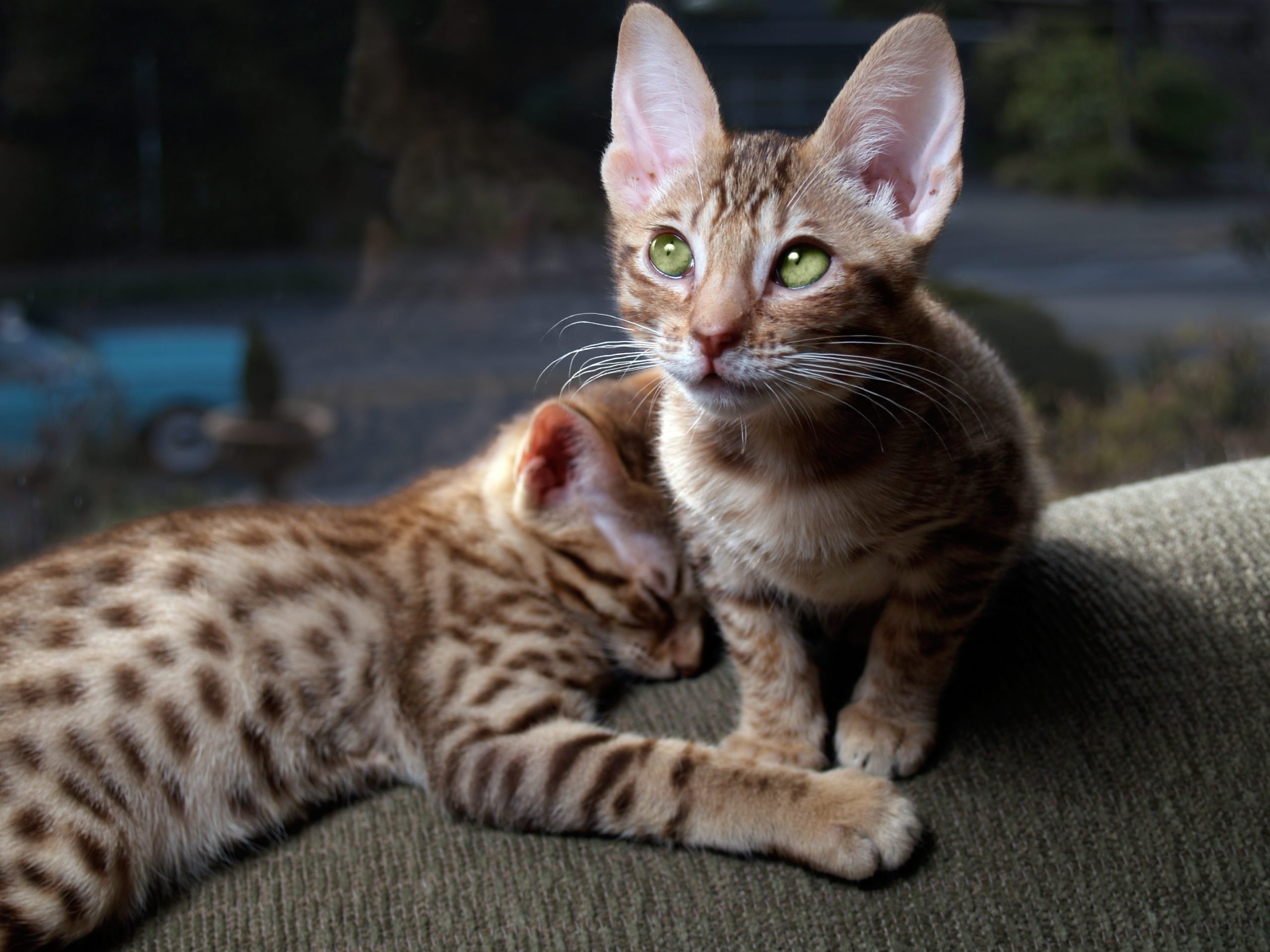 This head-turning feline with spots resembles its wild cat cousin the Ocelot, and those distinctive spots and sleek, athletic frames are clues to its ancestry. “The original parent breeds were the Abyssinian and the Siamese, and later American Shorthair,” says Keiger. Large and muscular like its ancestors, the Ocicat weighs in at 12 to 15 pounds, which qualifies it as a large breed cat. Ocicats are a lot like dogs in that they are devoted to their family, love water, and enjoy playing and being challenged by learning new tricks. Not all cats love the water like the Ocicat. Here’s why some cats detest water. 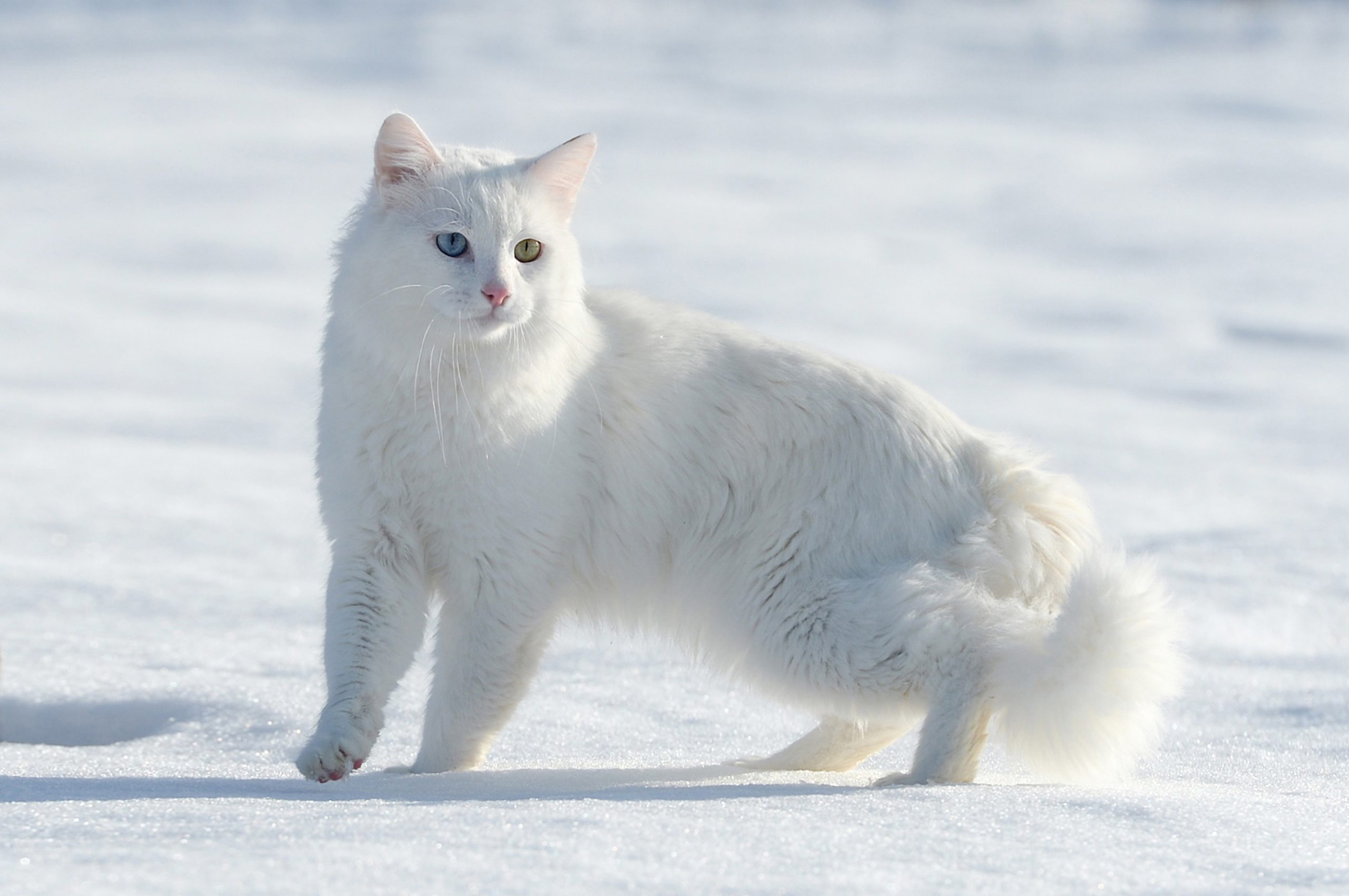 As its name implies, this feline hails from Turkey. It’s an old breed with the distinguished markings of an all-white coat with color only on the head, tail, and one body spot. As large cat breeds go, the Turkish Van ranges from seven to 20 pounds; males are heavier than females. Keiger says the Turkish Van arrived in the United States in 1982, so it’s quite rare to see. You’re not likely to see this rare beauty outside strolling down the sidewalk. Yet they are known as the “swimming cats” because they enjoy paddling about in the water. Turkish Vans are a unique beauty just like these other rare cat breeds you probably didn’t know about. 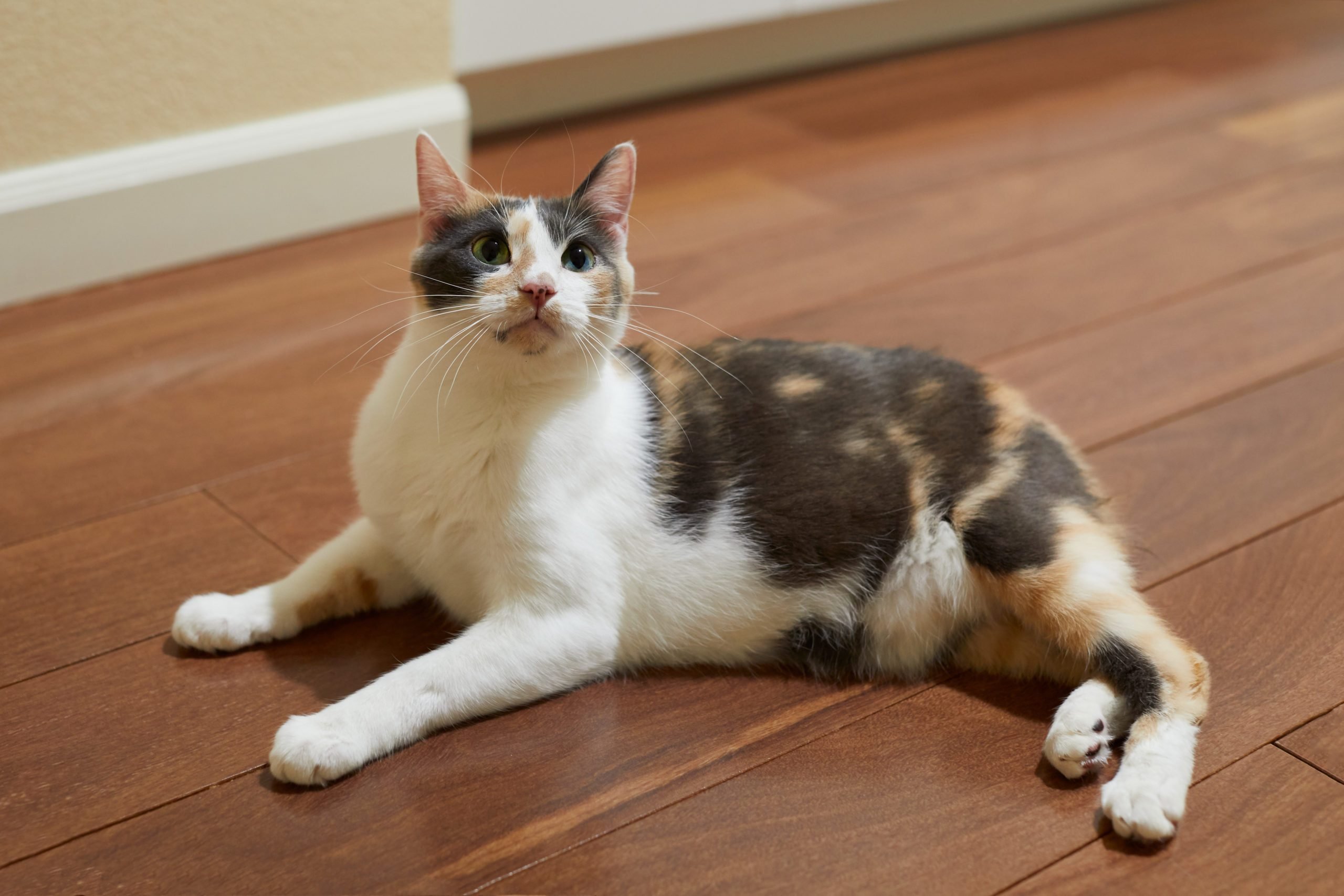 The Manx has a lot more going for it than its adorable round face and full cheeks: This tail-less cat is irresistibly cute and outgoing. “This breed is so much fun; so interactive and so playful and comical. They’re like little clowns,” says Gary Veach of Briar-Mar Manx Cattery and a CFA judge. They may be “little” compared to humans, but in the feline world, the Manx is a robust, muscular breed that can weigh up to 20 pounds. Males generally hit the higher weight over females with their added muscle structure. Like so many other large cat breeds, Manxes display dog-like qualities in that they are loyal, affectionate, and thrive on engaging playtime with their humans. Here are some more cat breeds with the friendliest personalities. 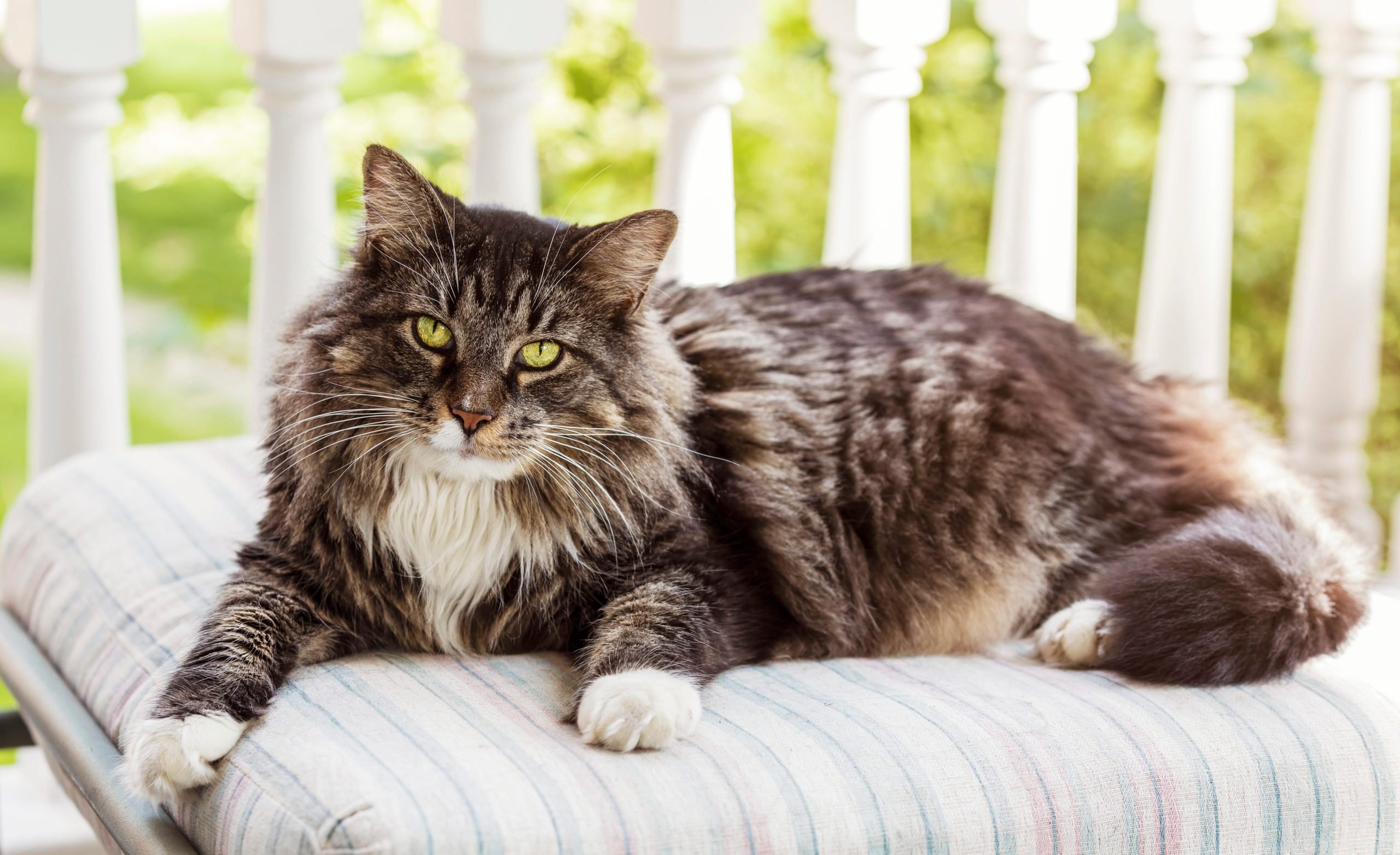 The Maine Coon cat holds the rare honor of being the official cat for the state of Maine, where it originates from. Oddly enough, these adorable shaggy-coated gentle giants of the feline world tend to be afraid of their own shadow and have tiny voices that trill and chirp, says Bethany Colilla, a CFA judge and secretary of the Maine Coon Cat Breed Council. “They are typically about 15 to 20 pounds. Females tend to be on the lower end of the spectrum; however, the larger males can sometimes get closer to 25 pounds,” says Colilla. While Maine Coons are lovable and easygoing, it’s always good to know how to get a cat in a cat carrier without getting clawed. 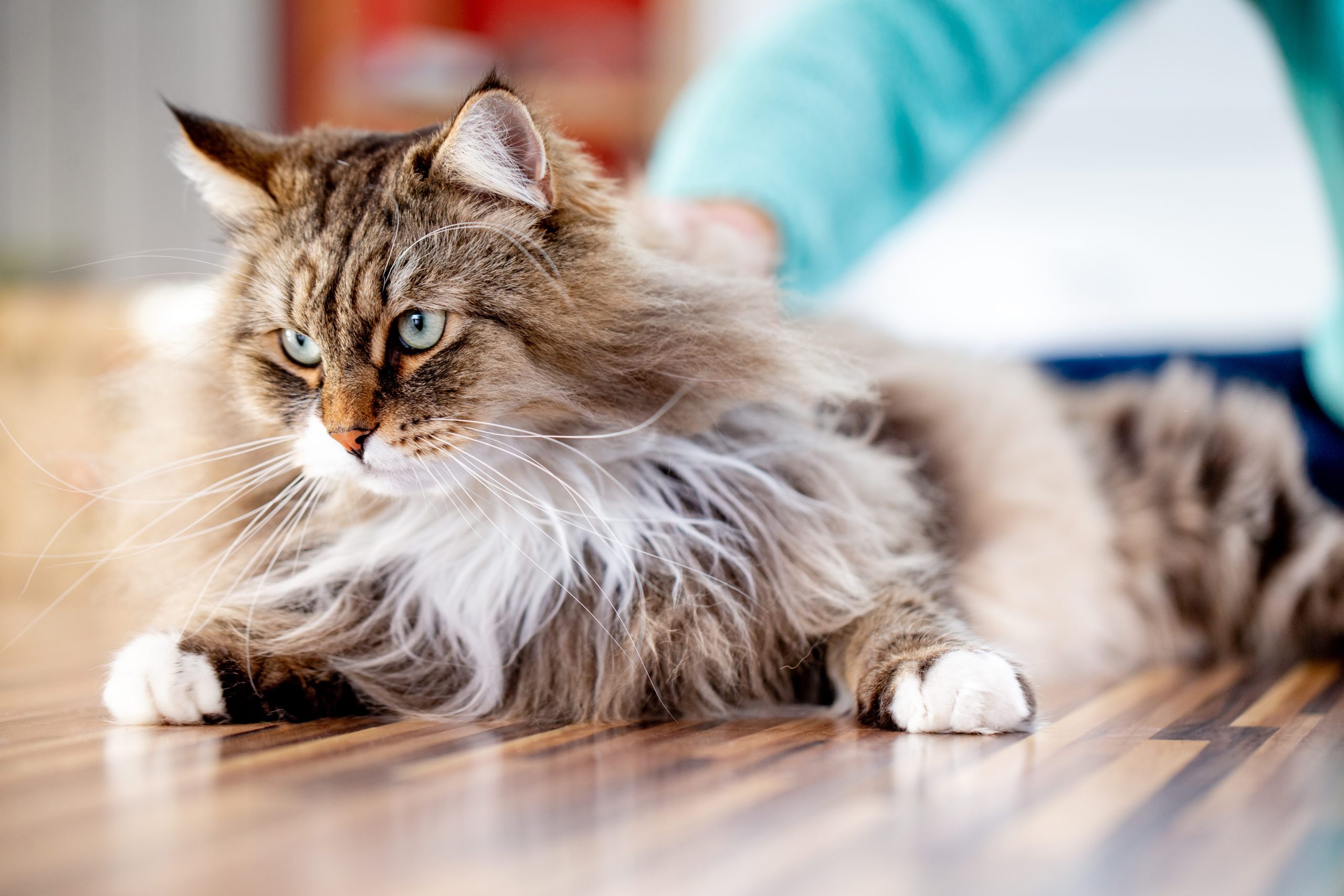 Mature Siberians, a robust large cat breed that originated in Russia, may even be heavier than the massive Maine Coon. “It isn’t unusual for a fully grown adult male to weigh as much as 25 pounds, but typically they run 12 to 16 pounds and females nine to 12 pounds. Yet they look smaller than the Coons because of their more compact, barrel-shaped bodies,” says Iris Zinck of Folie à Deux Siberian Cattery and a CFA Allbreed Judge. Zinck says the Siberian is a favorite with allergy sufferers because they generally have lower concentrations of an allergenic enzyme in their saliva, meaning their fur and dander are often easier for people to tolerate. Perfect for cat lovers, Siberians are incredibly mellow and affectionate and love to cuddle. Find out 12 more cuddly cat breeds that are super affectionate. 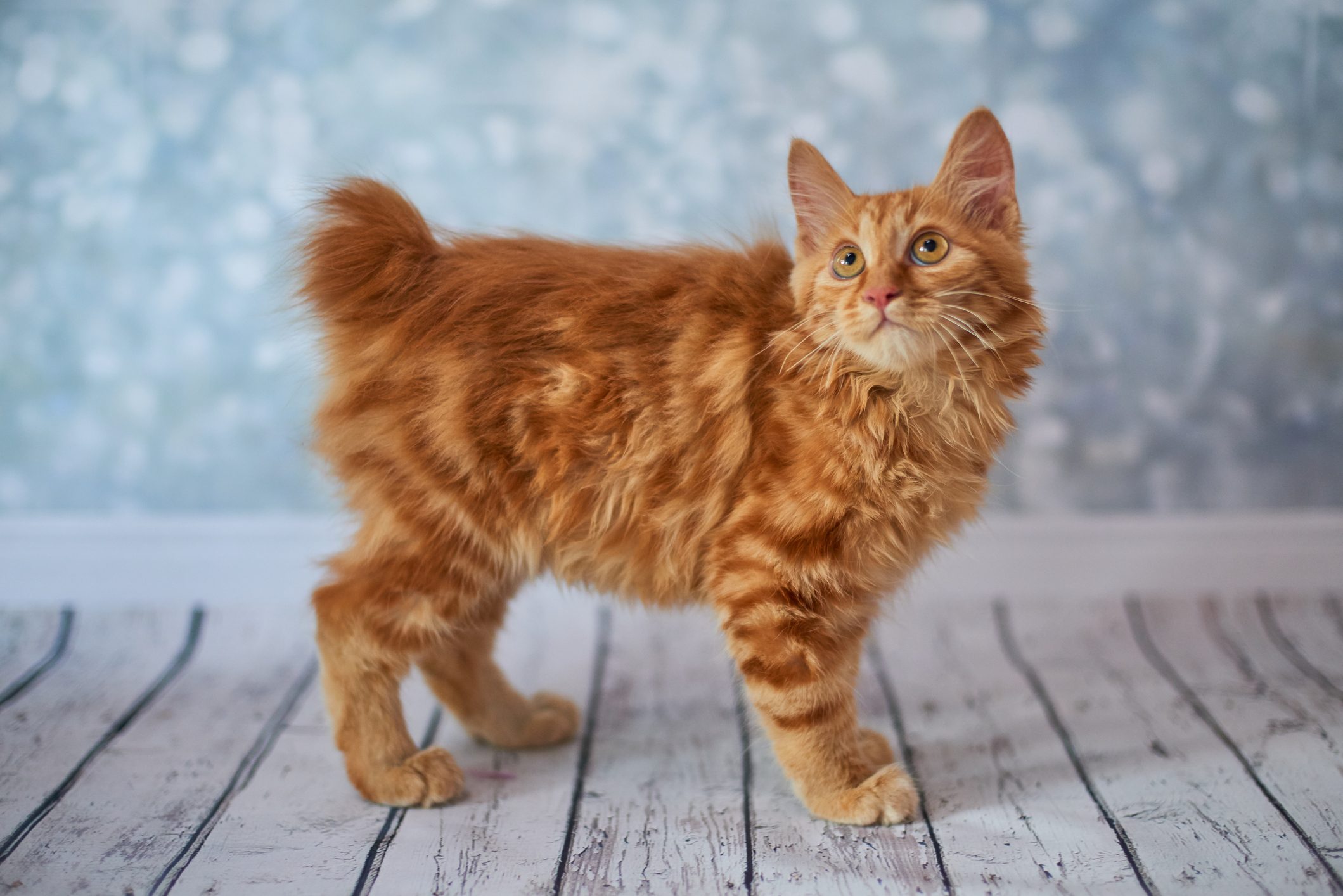 There’s no mistaking the piercing hunting gaze, muscular body, and trademark bobbed tail of the American Bobtail. In fact, it probably reminds you of the wild bobcat—just a smaller and cuddlier version. “Males are generally 14 to 20 pounds and females nine to 15 pounds,” says Lorna Dawn Friemoth of NuDawnz Cattery. “They are very dog-like in nature and enjoy being carried like a sack of potatoes. And they are very in tune with their owners and are often used as therapy pets and in special needs classrooms.” It’s hard to believe, but these common cat “facts” are actually false! 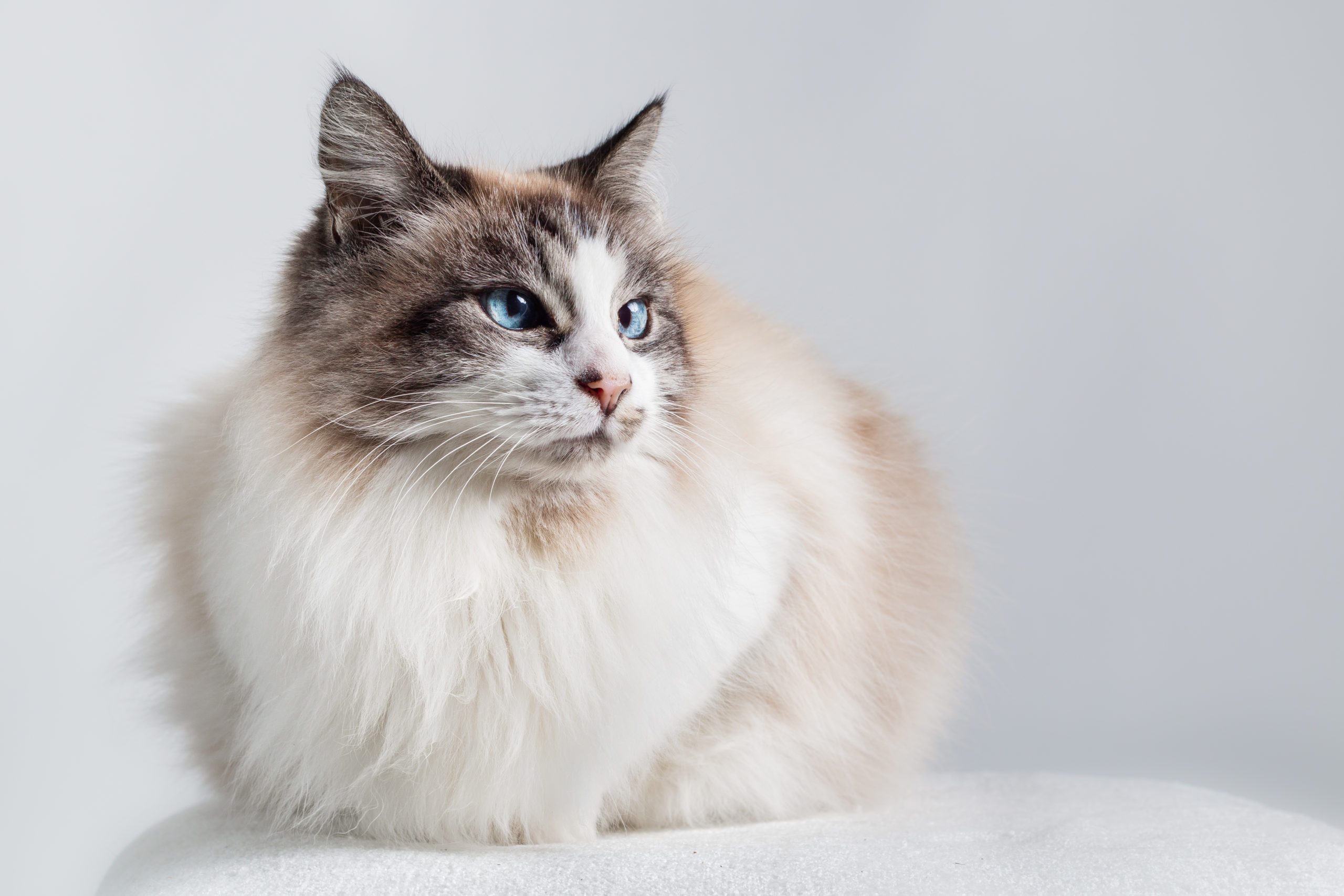 How did an adorable cat with striking blue eyes and waves of long, silky fur get a name like Ragdoll? It actually has nothing to do with its appearance. “They got their name, Ragdoll, mainly because of their relaxing and laid-back personalities,” says Lauren Tan of Ragdoll Villa Cattery. “Most of them tend to go limp like a rag doll in your arms when picked up.” Ranging from ten to 20 pounds, this large cat breed craves human attention and possesses dog-like behaviors; they will likely follow their human around the house and even come running when their name is called, Tan says. The cat’s out of the bag! These are the 11 secrets your cat’s tail is trying to tell you. 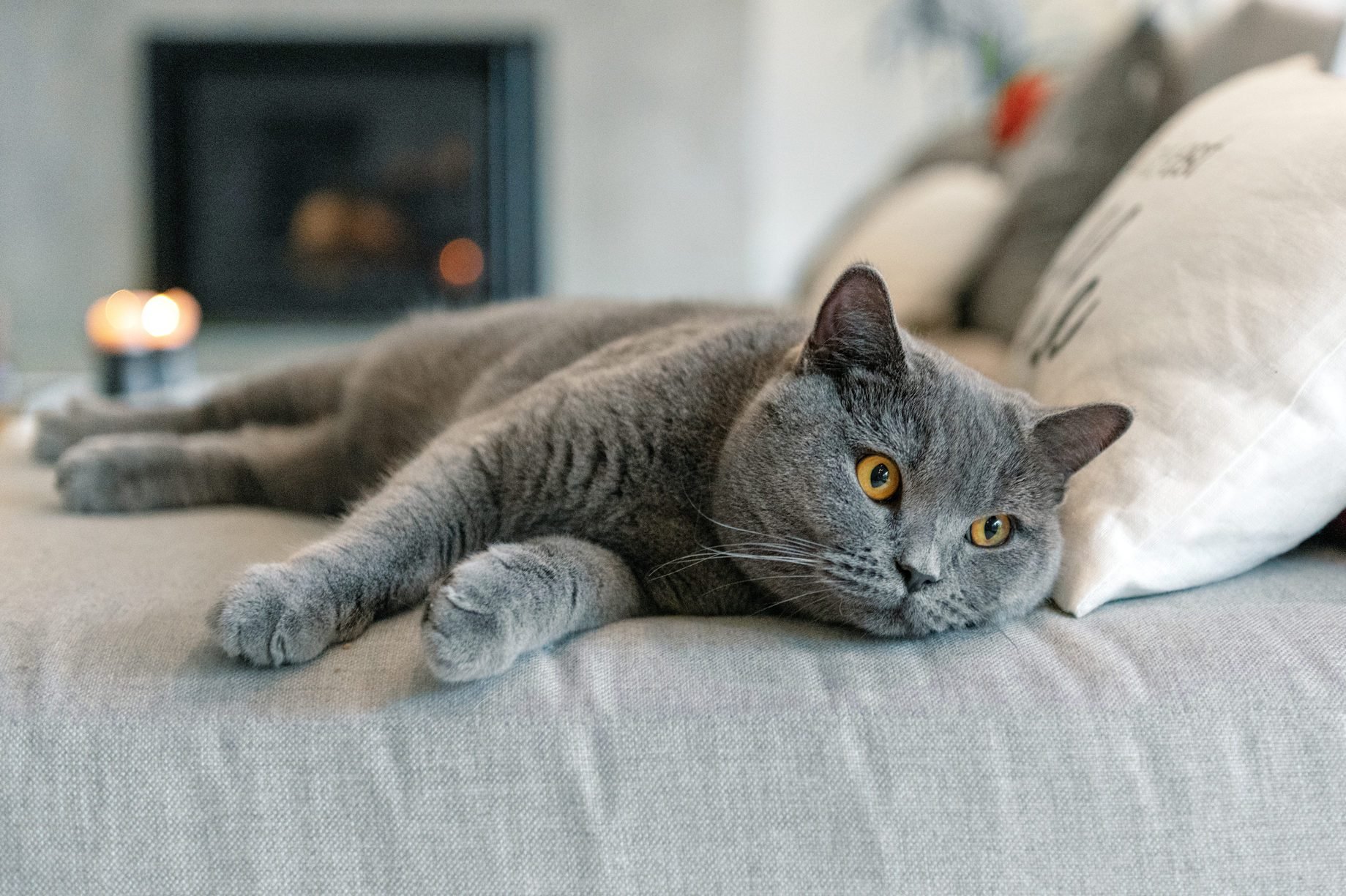 While most cats favor the highest branch of the cat tree (or the top of a refrigerator), the plush and cute British Shorthair prefers to keep all four paws on the ground, says Cyndy Byrd, CFA’s British Shorthair Breed Council Secretary. This large cat breed (ranging from nine to 20 pounds, females on the lighter side) was Britain’s barn cat, employed to guard the grain. “They are steadfast companions of the entire family and always in quiet control of [their] environment, supervising everyone and everything that happens in the family,” says Byrd. And if this Brit looks familiar, that’s because it inspired the Cheshire Cat from Alice’s Adventures in Wonderland. By the way, all that super-plush fur is also its claim to fame: British Shorthairs have the most hair per square inch of all cat breeds. Even large cat breeds were teeny once; get a look at these adorable photos of the cutest cat breeds as kittens.