Is it best to give a grieving person space or lend a helping hand? Offer advice or just a shoulder to cry on? These personal stories reveal what works—and what doesn't—when supporting someone through trying times. 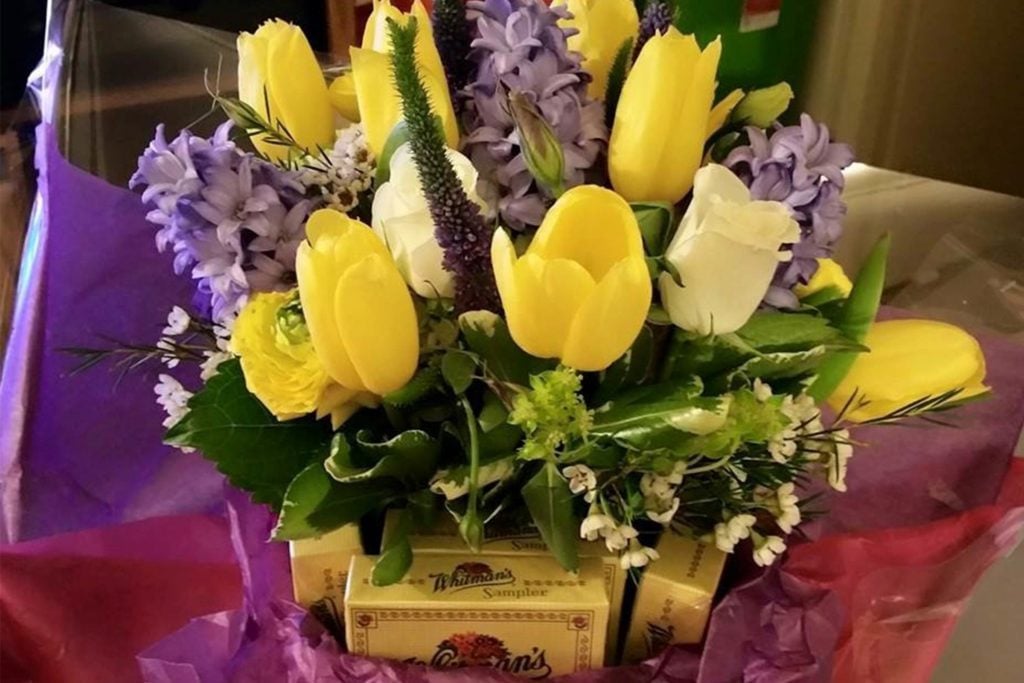 When someone is grieving the loss of a loved one, it can be hard to know how to help. Beyond knowing the nine words you should never say to someone who is grieving, there are plenty of positive ways to show support, says the National Hospice and Palliative Care Organization (NHPCO). Instead of saying “Call if you need anything,” make specific offers, like running a particular errand or doing a yard chore. And overall, take your cues from the bereaved by respecting any needs they may express or cultural perspectives they may have. The following personal stories reveal what else works best to help a friend or family member dealing with grief. Don’t miss this powerful story that will convince you to stop saying, “let me know if you need anything.” 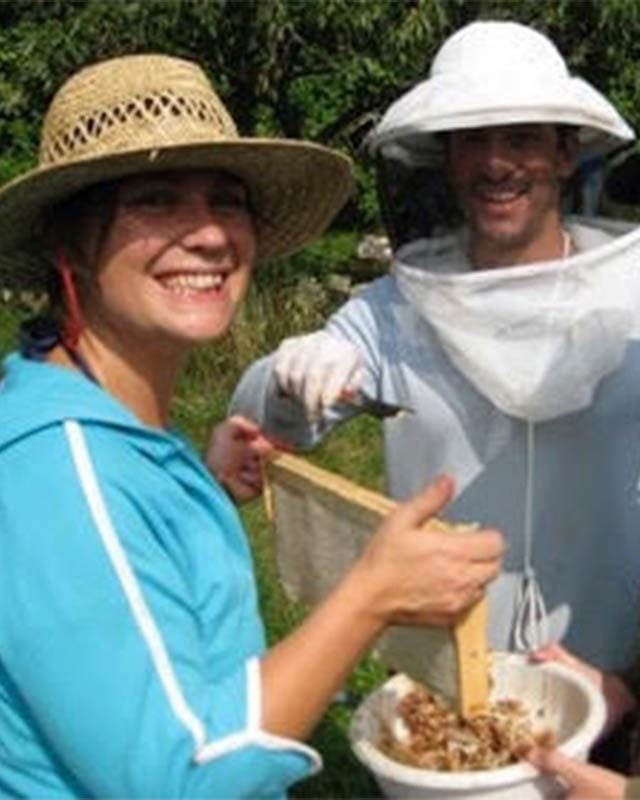 “As the team of wardens searched for my partner in the river, the lead warden told me to call a friend, as he didn’t want me to be alone. My friend Becky was the first to answer and came to the river immediately. We waited out the search together—with her mostly hanging back, giving me space, or entertaining our dog. After they found Matt’s body, a well-meaning, but poorly skilled crisis worker came to me, handing me a packet of information, saying, ‘now that you’re a widow, you’ll need these things.’ While I stood there, saying nothing, still reeling from the fact that I was, now, suddenly, inexplicably, a widow, she went on and on about my ‘widowhood’—facts and details and phone numbers. After several minutes, I turned to Becky and said, ‘please remove her.’ In that moment, my mild-mannered, gentle friend turned fierce (though calm and clear). I have no idea what she said to the crisis worker, I only know the worker went away. I have no idea what she said in the weeks to come, whenever someone, within her earshot, did something rude, insensitive, or intrusive. Becky became one of a core group of bodyguards—people committed to making the horrendous even just a little more gentle. Together, they made protected space for me. They called funeral homes to ask questions I couldn’t ask. They fielded hundreds of calls and emails from well-wishers, extended family, and nosey onlookers. They cared for the dog, took out the trash, kept co-workers informed. They took over when the immediacy of grief made some people, shall we say, rude and poorly skilled, in their actions toward me. They were so efficient and effective, many difficult things happened in those days that never made it to me—I was briefed only after the issues were sorted. I bet I didn’t hear the half of it. In removing so many external burdens, they left me to stare at the gaping hole that just erupted in my life, secure in the knowledge that they had my back. That one, sustained, kindness made all the difference.” Make sure you know these 10 things you should say to someone who is grieving.

—Megan Devine, Portland, Oregon-based author of the forthcoming book It’s OK That You’re Not OK: Meeting Grief and Loss in a Culture That Doesn’t Understand 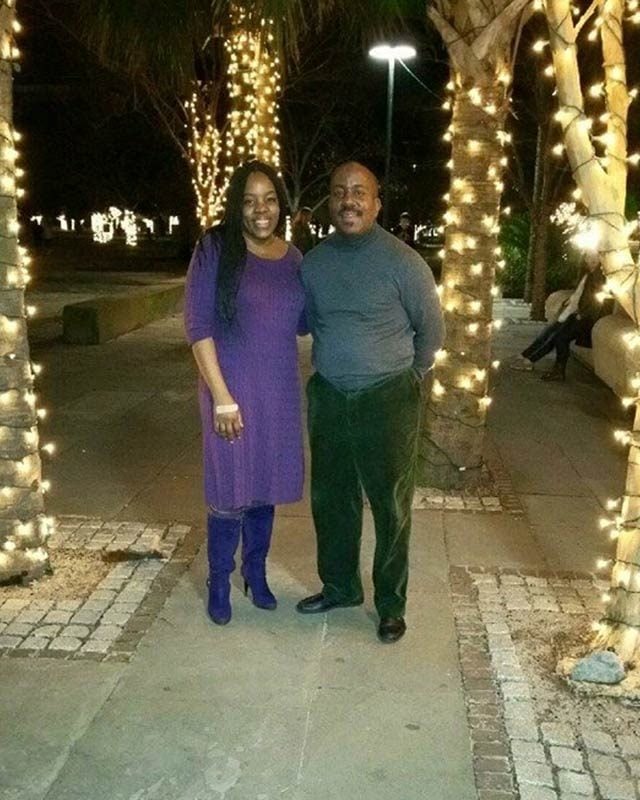 Getting flowers long after the funeral

“The one thing that meant the most to me after losing my brother, Elvis, suddenly was receiving flowers after everything was over. Usually the calls, messages, texts, etc. are booming once it happens but soon after the funeral ends it seems everything stops. When I received those flowers I was at a point where I needed to hear someone’s voice or a shoulder to cry on. This truly encouraged me. Also this act of kindness prompted me to start Cookies of Comfort for Christ, a charity where I send out cookies to those who are bereaved, sick, or just in need of encouragement. I like to send to the bereaved weeks after the death of their loved one. The response I get is amazing because they receive the cookies and handwritten note just when they need them!” 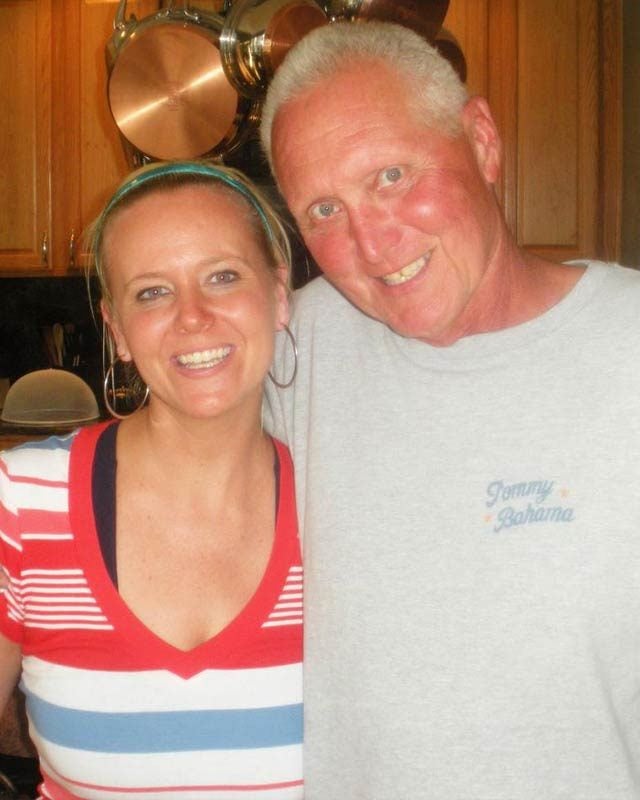 “I lost my father (and best friend) to brain cancer in December 2010. After he passed, the messages that were so touching to me were the ones where people shared memories of my dad. A friend from high school, for example, reached out and relayed a memory about a Denver Nuggets basketball game that my dad had taken us to when we were teenagers, and how fun my dad was. I especially cherish the messages from people who told me that I reminded them of my dad—whether it was having the same chubby cheeks as him or the same sense of humor—because it felt like I was carrying my dad’s legacy and that he was still a part of me.” 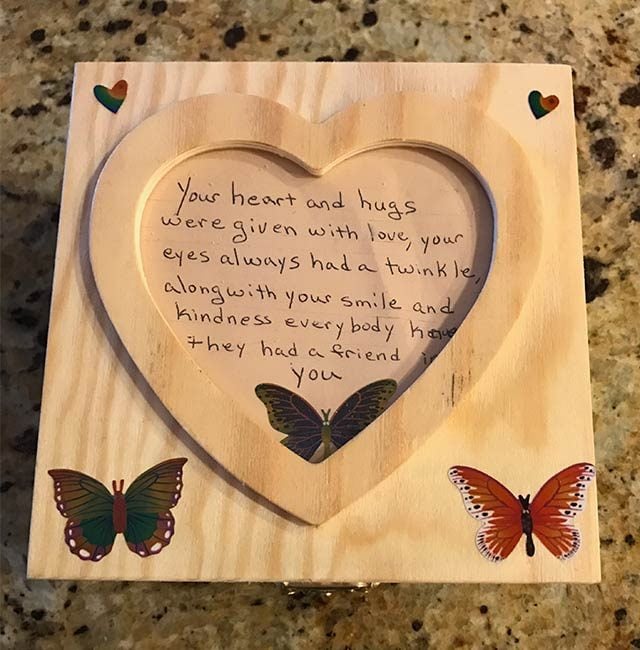 “I’d had a complicated relationship with my mother, who passed away in October 2016. From a young age, her life didn’t turn out as she’d hoped, and as a result anger and bitterness set in and developed deep roots. After a lifetime battle with depression and every kind of smoke-related illness, she began showing signs of dementia. In 2014, we moved her into an assisted living facility and it, along with the progressive dementia, changed her life. The ladies there made her come down for lunch and dinner. They went to her room to bring her to bingo. They signed her up when they had an outing. Within weeks, she was changing and enjoying her new-found social life! And the dementia allowed her to forget her anger and bitterness. She started loving things again and even made us laugh. I got the mother of my childhood back that year, and after she passed, both staff and residents came in to see my sister and me. They cried. They told me how they would come in to see her on their days off. They told us how she waved every time they walked by and always had a compliment. But they didn’t stop there. They gave each of us a small wooden butterfly box filled with handwritten notes about mom. The mom of my final two years was not the mom I had for most of my life, and these women provided memories that I will cherish forever!” This is how a quilt helped one grieving mother cope with the loss of her newborn baby.

—Tami West, PhD, author of the book The Stress Club: Stop Participating, Take Your Power Back, and Start Living Your Own Life 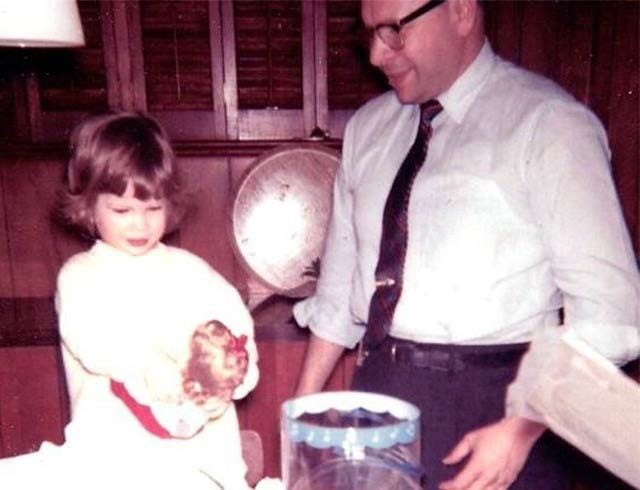 “I lost my father when I was 13. A girlfriend came to pay a condolence call and handed me a beautifully perfect sand dollar. She said, ‘I don’t know what to do to make you feel better. The only thing I could think to do was to give you this sand dollar, something I really love. Something perfect and beautiful.’ That touched me so much. But it’s not the end of the story. Lauren’s own father died not two years later. I paid a condolence call, handing her the sand dollar, saying, ‘You gave me this sand dollar because you cared and wished like anything you had something, anything you could do to relieve my pain when my own father died. And it did help me. Because it showed me how much you cared. I’m returning it to you now in the same spirit, wishing so much I could relieve your pain, and not knowing what else to do.'” Check out this inspiring story about a man who hangs up Christmas lights for grieving families. 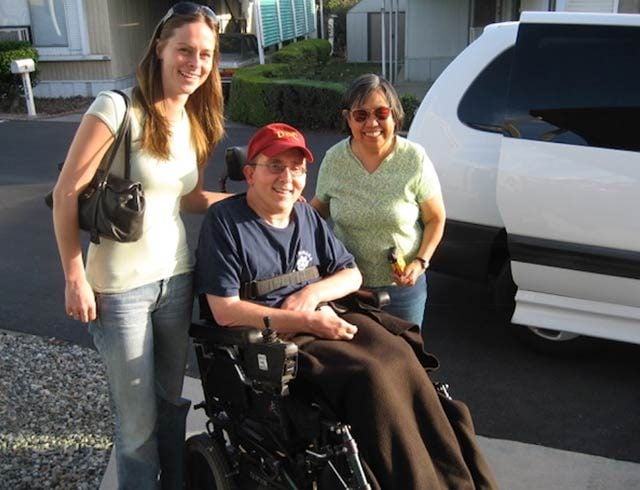 Being allowed to feel a range of emotions

“Early on June 5, I lost my uncle after he’d had a decades-long battle with multiple sclerosis, a horrible, vicious disease. I’ve appreciated the people who’ve let me know it’s OK to have conflicting emotions about his death. On one hand, I’m happy he’s no longer in pain. On the other hand, I hate knowing I’ll never get to hear his laughter again. There are ups and downs—moments when everything seems fine and times when the tears start falling for no apparent reason. The thing I’ve appreciated the most have been the people around me who seem to understand that grief has ebbs and flows. Whether it was the bouquet of flowers my husband sent me or an email from a family member or Facebook comment from a middle school pal, everyone who has taken a moment to reach out has helped me realize it’s OK to not be OK when you lose someone you love.” Read up on how these residents of an assisted living facility found joy in nursing kittens back to health. 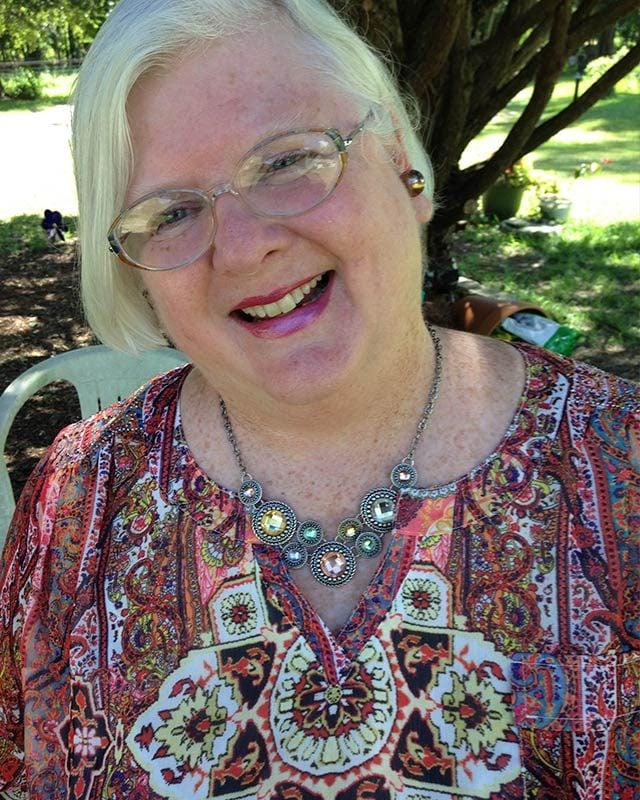 Friends who went out of their comfort zone

“My husband of 33 years died unexpectedly from a stroke in February. My personal experience with friends has been their sacrificial giving. Angela, a former co-worker and close friend, took me to a conference in Tallahassee, Florida, knowing full well she did not like to sit through presentations. I was trying to explore my new identity, and she drove me down to hear the speaker. Trish, my birth coach and my son’s godmother, planned a spa day and dinner the day before Easter. She sacrificed her busy Saturday to allow me to be pampered. There are many more friends and family that gave ‘out of their comfort zone’ or outside their busy schedule. It is something that deserves further thought and expressions of gratitude.” 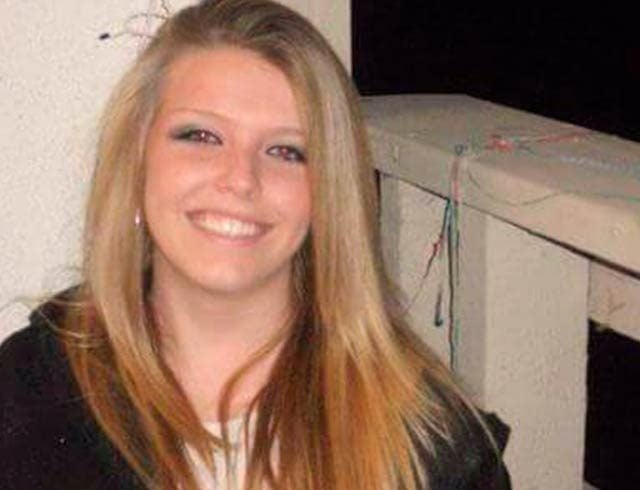 Someone who just listens

“My grandma passed when I was pregnant with my second son, and it was a devastating loss. My son got a tattoo to remind him to pray to honor her. My little sister passed in 2014 of cancer, and it was devastating for my son—they were best friends. Everyone has a different grieving process, and he was told many times to get over it; she would want you to move on. Some people need to not talk and maybe just listen.” Make sure you know these 11 etiquette tips for talking about death on social media. 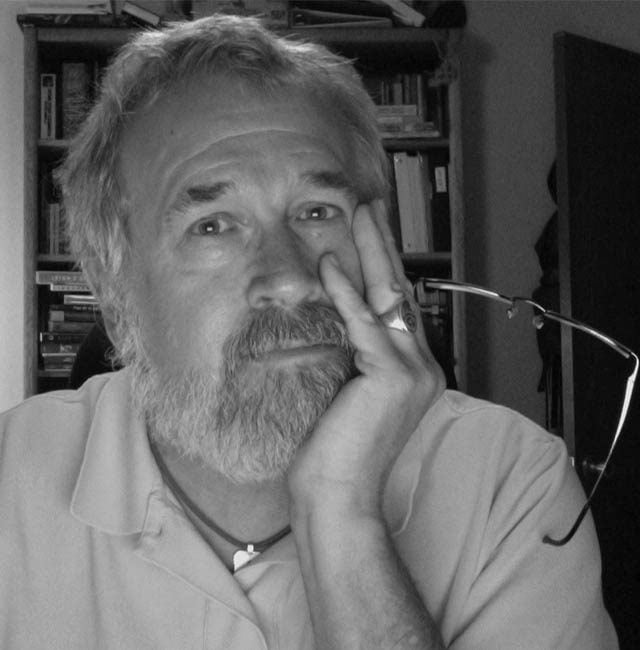 Not being rushed to resume normal life

“Several years ago, in one of the grief groups I led, there were two women in their 30s whose husbands had recently died. One had children, one didn’t. One had a career, the other now had to find a job. One was white, one was black. The husbands’ deaths were a stark contrast: a fatal auto accident versus years of brutal cancer treatments. As different as they were, the two bonded when discovering that friends and family members were encouraging them to ‘start dating again.’ They were young! They had their lives ahead of them! They should find someone else! But they needed to grieve. How could they think of any future when they could barely make it through the day? They admitted they didn’t have the courage (or energy) to tell family and friends to ‘shut up,’ but they were so grateful to find each other and know they weren’t alone.” Never say these 10 things to a grieving widow.