13 Lucky Things That Happened on Friday the 13th

The notorious date isn't all bad news and horror movies. 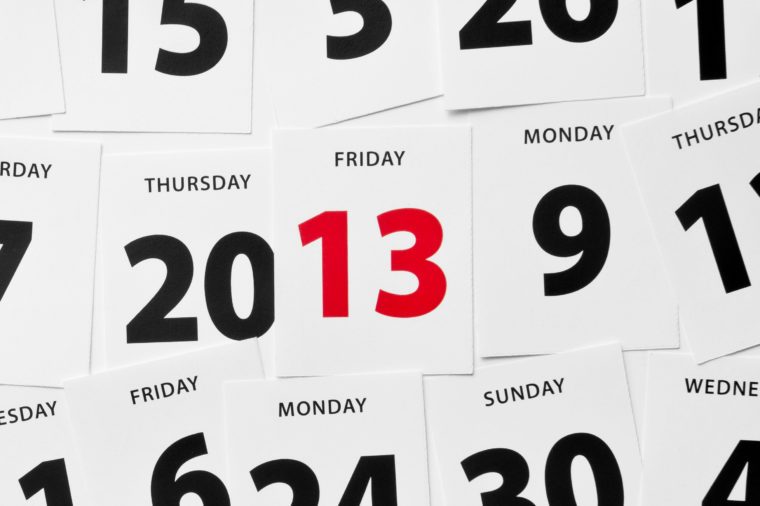 The fear of Friday the 13th

If you’re at all superstitious, chances are that you get a little nervous when you spot Friday the 13th on a calendar. The date has been synonymous with bad luck for ages. In fact, according to History.com, a phobia surrounding it even has a few names: paraskavedekatriaphobia and friggatriskaidekaphobia. While there’s absolutely no scientific evidence supporting the idea that Friday the 13th is actually unlucky, its origins as a not-so-great day go back pretty far. We’re talking way back to the last days of Jesus Christ. The BBC reports two theories about the unlucky day, including the idea that there were 13 people in attendance at the Last Supper and the fact that it takes 13 witches to create a coven.

But even if you’re a true believer concerning the negativity of Friday the 13th, you’ll be pleased to hear that some good things have happened when that day of the week and that number of the month collide. Here are—of course—13 of them. 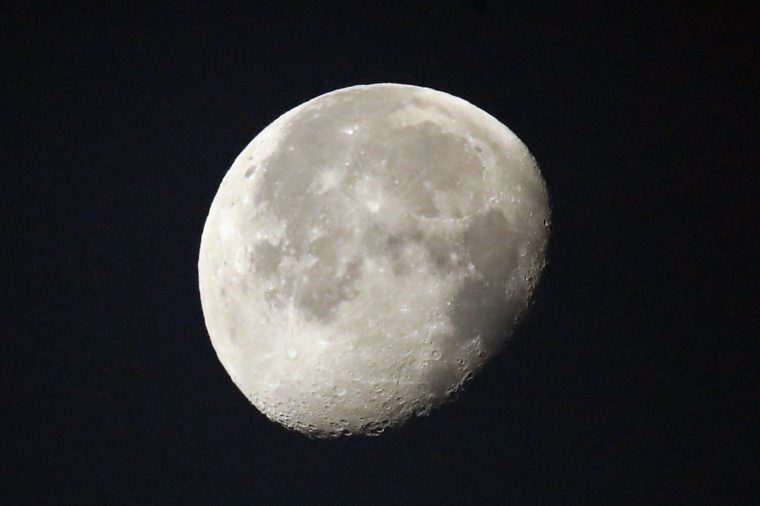 One super cool scientific discovery was made public on Friday, November 13, 2009. On this date, NASA scientists shared that water was discovered on the moon, according to CNN. “I’m here today to tell you that indeed, yes, we found water. And we didn’t find just a little bit; we found a significant amount,” said NASA project scientist Anthony Colaprete during a news conference. The team discovered what they describe as “about a dozen, two-gallon bucketfuls.” A pretty cool factoid—and absolutely nothing unlucky about it! By the way, this is the real reason we believe in superstitions, according to science. 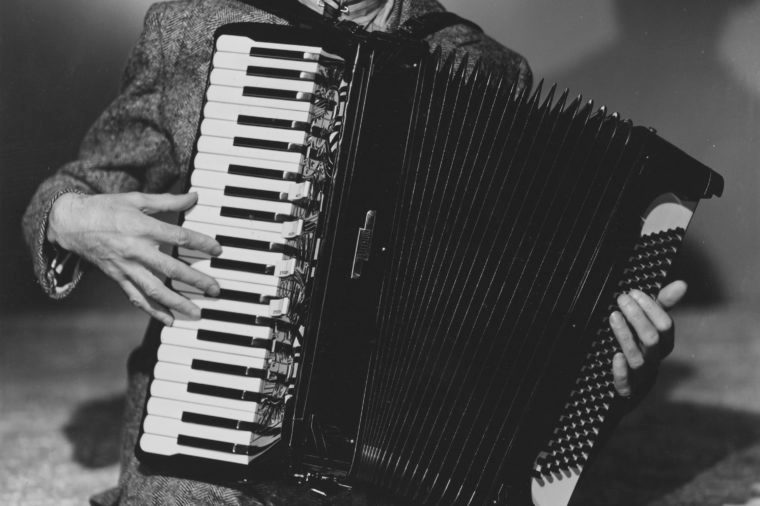 Music to our ears

A very important musical invention was introduced on Friday the 13th. The production of the first guitar? No. The first time someone tickled the ivories of a piano? Nope. The accordion was patented on January 13, 1854, which was a Friday, according to Time.com. Just think of how positively sad your grandmother would have been if she hadn’t been able to enjoy her polka music with the accompaniment of this instrument. The squeezebox originated in Europe and is tangible proof that good things really do come to fruition on a date that may inspire dread in others. That said, here are 13 odd and creepy real things that happened on Friday the 13th. 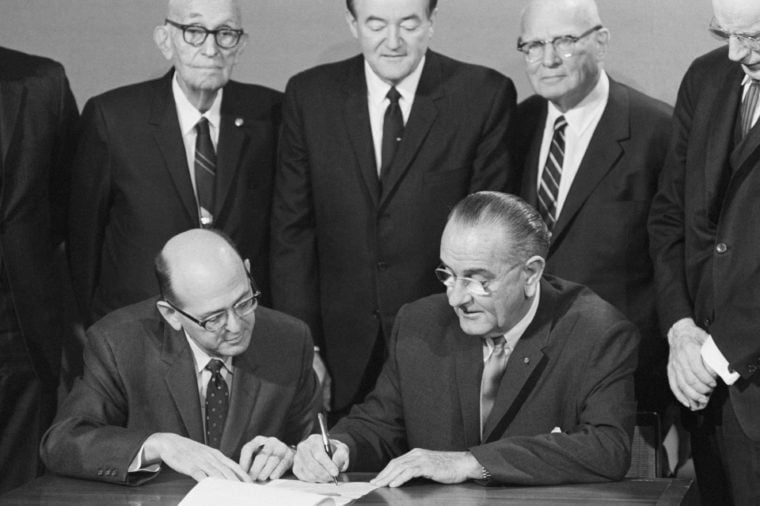 So, maybe you’re not down with the accordion, and the fact that there’s actual water on the moon makes you yawn. Well, listen up: Here’s a Friday the 13th happening that everyone can get behind. When President Lyndon B. Johnson signed an order stating that the government couldn’t discriminate based on gender when it came to employment, it was Friday, October 13, 1967. Prior to this, President Johnson had signed a landmark Civil Rights Act in 1964. These acts of progress toward equality can definitely be filed under Friday the 13th’s most positive moments. Here’s the history behind five common superstitions. 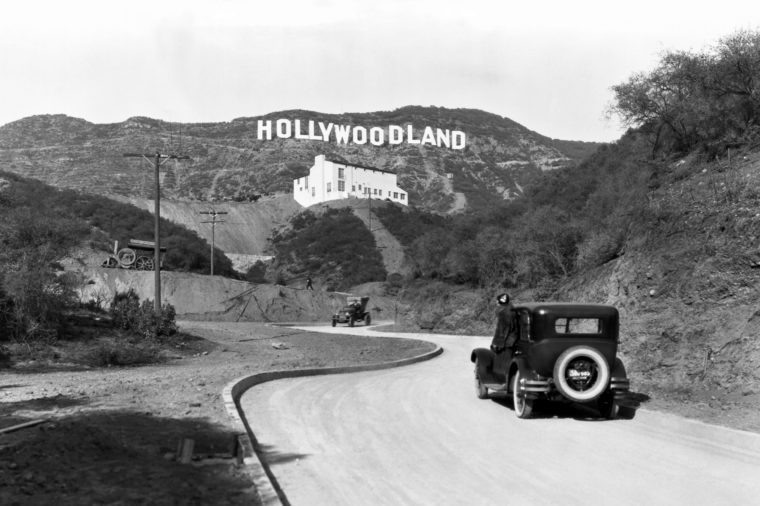 Forget, for a second, that Hollywood is largely responsible for publicizing Friday the 13th as a day of bad luck with its string of horror movies of the same name. Tinseltown’s iconic Hollywood sign was actually dedicated on July 13, 1923, which was, as you may have guessed by now, a Friday. Initially, the sign read “Hollywoodland,” as an advertisement for a real-estate development. But in 1949, the “land” was ditched from the sign and Hollywood remained, according to the sign’s official website. A landmark so integral to a city’s tourism can’t be bad luck, can it? On the other hand, there are more than a few celebrities with strange superstitions. 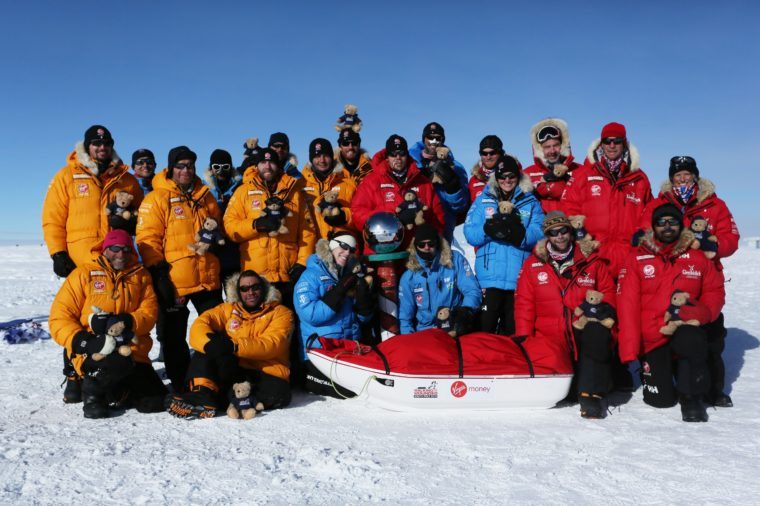 The South Pole doesn’t see a lot of action in terms of people, but Prince Harry, accompanied by members of the Walking with the Wounded charity, reached this frigid point on December 13, 2013. Even the royal noted the coincidence of the day of their arrival. “A half-day on Friday and we get to the South Pole on Friday 13th, unlucky for some, lucky for us,” Prince Harry said in a voice blog, according to the BBC. The team walked for 200 miles to make it to the South Pole, pulling sleds for more than three weeks. You won’t believe these surprising things that are actually considered bad luck. 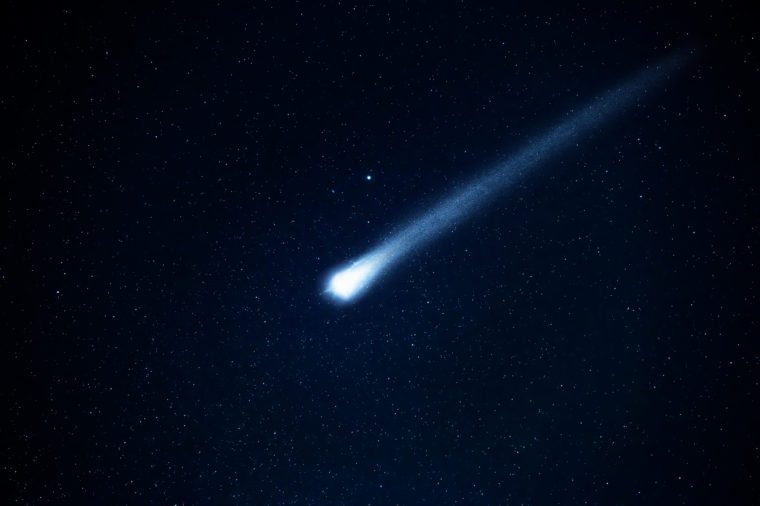 It hasn’t happened yet, but CNN reports that on Friday, April 13, 2029, folks in Africa, Europe, and Asia will be able to witness an enormous asteroid flying past Earth without the use of a telescope. Depending on whether these types of instances freak you out or not will likely decide whether you consider the asteroid situation lucky or unlucky, but the planetoid will be so close to our own orb that it will be detectable by the human eye in the aforementioned parts of the world. (But don’t worry—not close enough to crash into Earth.) 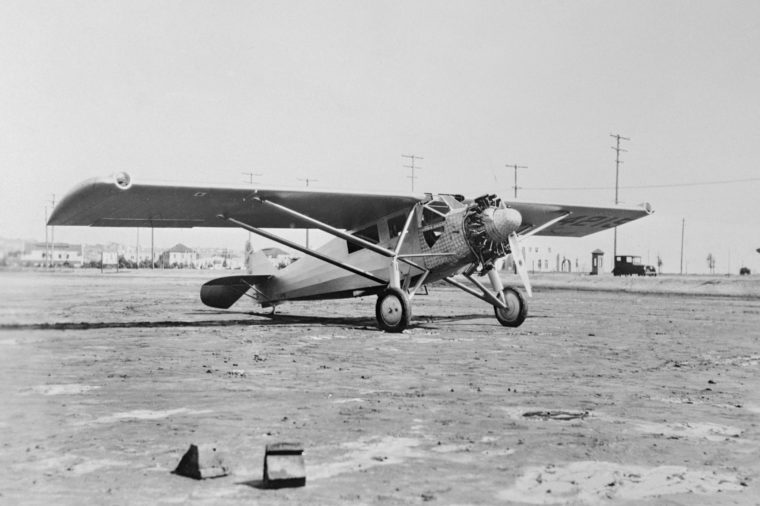 On one Friday the 13th in 1939 (it was October of that year, to be exact), a fierce leader proved the day to be full of good fortune. On this date, Evelyn Pinckert Kilgore became the first licensed female flight instructor. Kilgore, who lived in San Bernardino, California, was licensed under the Civil Air Authority. Believe it or not, these days are historically unluckier than Friday the 13th. 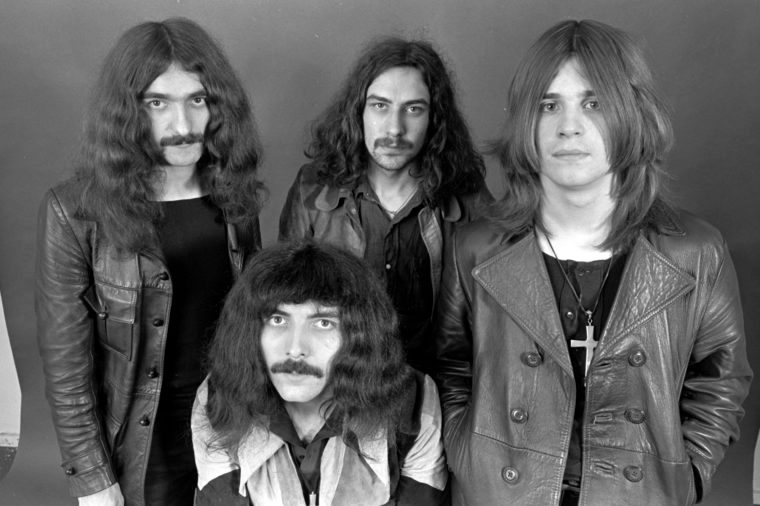 If your musical preferences lean toward the head-banging variety, then you might already know that a Friday the 13th in 1970 was very fortuitous indeed. It was the day that Black Sabbath released its self-titled debut album—a day specifically chosen by the label, according to Rolling Stone, “to capitalize on the band’s creepy mystique.” The band is believed to be the first heavy-metal ensemble in the history of music. “We knew instantly that ‘Black Sabbath’ (the song that gave the band its name) was very different to what was around at the time,” guitarist Tony Iommi said. While a Black Sabbath CD is A-OK, you should never keep these unlucky things in your home. 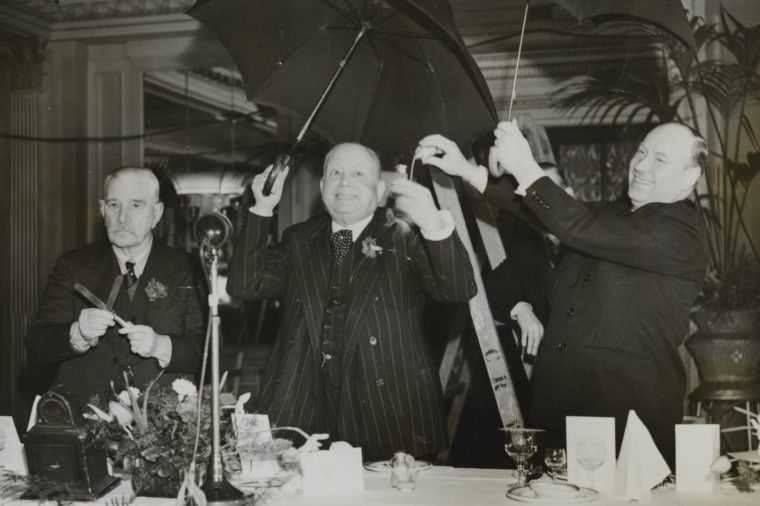 Those who want to debunk the bad luck surrounding not only Friday the 13th but also the number 13 look to create their own fun and lots of luck with the Thirteen Club. The club dates back to the late 1800s, according to The Paris Review, when its members joined forces to host dinner parties that fell on Friday the 13th. There were 13 courses to the meal and 13 candles lit for the first plate served. Members even upped the ante by engaging in other “unlucky” acts, like walking underneath a ladder. The very first of these soirees even took place in Room 13 of New York’s Knickerbocker Cottage. Sounds more fun than freaky to us, but here’s why some people are so afraid of the number 13. 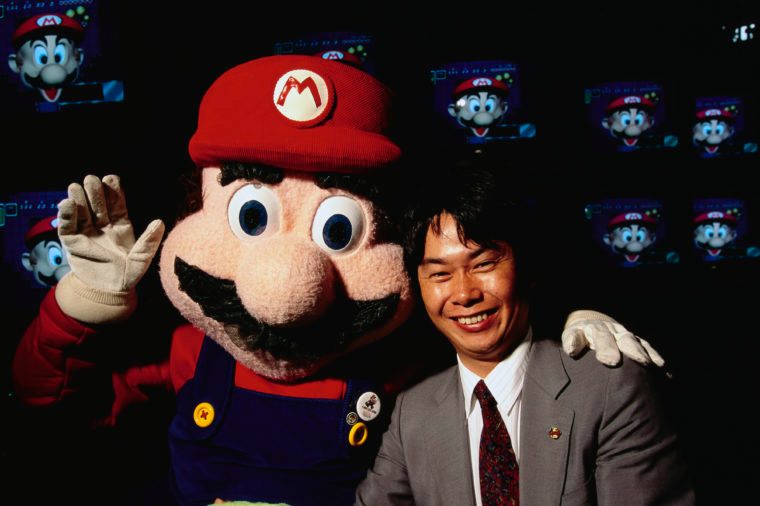 Even if you’re not obsessed with video games, you’ve heard of the classic Super Mario Bros. The first iteration of the game starring brothers Mario and Luigi was released on September 13, 1985. Developed by Nintendo, gamers were stoked to have a version of the arcade game they could play at home. It’s important to note that the game was first released in Japan on Friday the 13th, but it didn’t make its U.S. debut until a month later on October 18th. Check out some more fascinating facts about your favorite games. 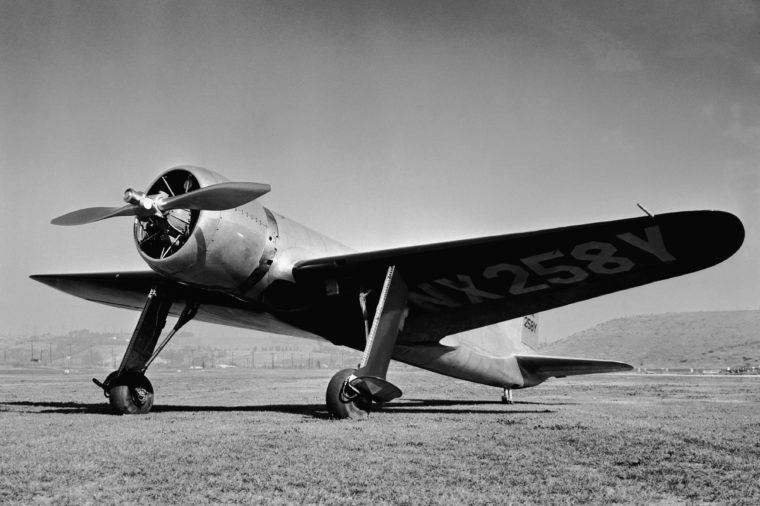 The need for speed

It was a Friday the 13th in 1935 when the Hughes H-1 Racer, the first aircraft model built by Hughes Aircraft, hit an unprecedented level of velocity. Reaching a top speed of 352 miles per hour, according to the Smithsonian National Air and Space Museum, it set the world airspeed record and a transcontinental speed record for flying across the United States. Indeed, it was a great day for aircraft enthusiasts. 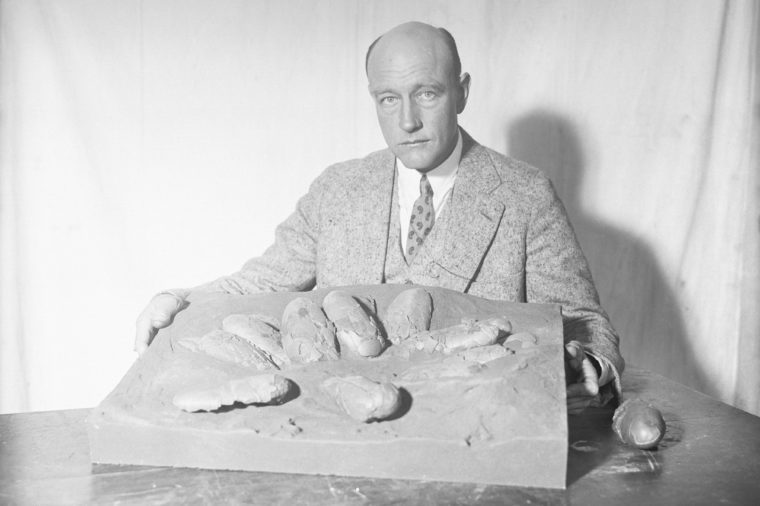 American explorer Roy Chapman Andrews had a fantastic Friday the 13th back in 1923, when he made a truly amazing discovery. While on a dig in Mongolia’s Gobi Desert, Andrews found what is said to be the first scientifically recognized dinosaur-egg fossils, according to Australian Geographic. Andrews later went on to become the director of the American Museum of Natural History in New York City. Find out which dinosaur myths scientists wish you’d stop believing. 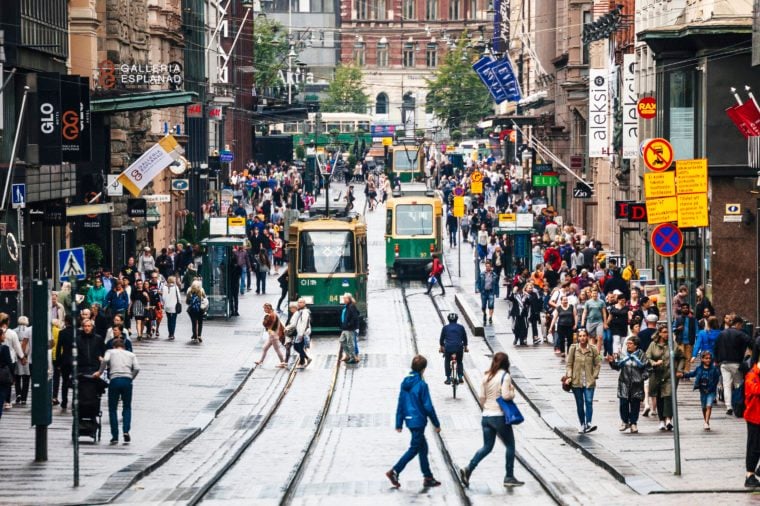 Here’s a brilliant way one country is turning things around for this superstitious day. Annually since 1995, Finland has held a National Accident Day on one Friday the 13th each year. On this designated day, the government puts a focus on road and workplace safety to increase overall public awareness about keeping individuals and those around them safe. By doing this, the Nordic country, which had been experiencing 1 million accidents annually, according to Finland Times, hoped to reduce the number of accidents. In the process, of course, that has made people think very differently about the number 13. Next, find out why it’s considered bad luck to open an umbrella inside.