8 Mistakes You Can Find in Famous Monuments

These goofs prove that no human-made monument is safe from human error.

Constructed in the early 20th century, this memorial to Honest Abe immortalizes some of his most famous words—plus some words he didn’t say. In his second Inaugural Address, the 16th president orated, “With high hope for the future, no prediction in regard to it is ventured.” But the engraver carving the address into the memorial wrote “HIGH HOPE FOR THE EUTURE” instead. Oops! Since capital F and capital E are only one line apart, this typo had an easy fix, but you can still see evidence of it. If you look closely at the memorial’s north wall, you can see the attempt to fix the blunder—the bottom line of the E was filled in with slightly off-color stone. Read more about Washington, D.C.’s most notorious typo.

The austere but beautiful tribute to those lost in the Vietnam War contains over 58,000 names, some of which are unfortunately spelled wrong—around 100, as a matter of fact.  The Vietnam Veterans Memorial Foundation has been hard at work fixing the typos for years. “Sixty-two of them have been re-engraved,” the foundation’s president Jan Scruggs told NPR. If only a letter or two is off, fixing the typo is easy, Scruggs explained. Some more complicated cases, though, require re-engraving the entire name somewhere else on the wall. Unfortunately, correcting a name like this does alter the arrangement of the wall. The memorial was originally designed to list the names chronologically, with those who died on the same day listed together. That’s why the family of Evangelista Pagan Rodriguez decided to keep his misspelled name (Evangelis Pagan Rodriguez) where it was, so that he’d be memorialized with others who died with him.

The Four Corners Monument, which marks the spot where you can stand in the states of Colorado, Arizona, Utah, and New Mexico all at the same time, might be a total sham. Here’s why: It’s about 1,800 feet away from the actual spot that those four states meet (as per Congress’s border designation in 1863). In all fairness, when Chandler Robbins chose the spot for the monument in 1875, surveying technology was far from precise, and for all he knew, he was commemorating the right spot. The National Geodetic Survey has even acquiesced that the monument has basically cemented that spot as the new “right” spot and that the old coordinates are “moot.” Check out more hilarious goofs you won’t believe made it past editors.

The Hollywood Walk of Fame

More like the Hollywood Walk of Misspelled Names! Okay, maybe that’s a little harsh, but the Walk has featured six misspelled celebrity names during its nearly 60-year history. Though stars like Julia Louis-Dreyfus and Dick Van Dyke eventually saw their goofed-up names corrected, some of the errors remain to this day. Merian C. Cooper, the writer of 1933’s King Kong, is immortalized as “Meriam”; film pioneer Auguste Lumière’s star reads “August”; and opera star Lotte Lehmann’s name was misspelled “Lottie.” These are the most expensive typos the world has ever seen.

You probably know George Herman Ruth, Jr., better by his nickname: Babe Ruth. The baseball legend began his professional career as a Baltimore Oriole, and Oriole Park decided to commemorate that fact in 1995. They had a nine-foot-tall statue, called Babe’s Dream, erected in front of the stadium. The statue captured Ruth holding a fielder’s glove in one hand and gripping a bat with the other. The glove, which Metal Babe held in his right hand, was a right-handed fielder’s glove. The problem with that? Ruth was left-handed! Ironically enough, the sculptor did do meticulous research on Ruth, getting the specifics on everything from his belt loops to the way he wore his hats. Unfortunately, she didn’t think to consider whether he might have been part of the ten percent of the population that favors their left hand.

In 1948, the state of South Dakota began construction on a mountain carving to celebrate the Native American war hero Tȟašúŋke Witkó, or Crazy Horse, a member of that region’s Lakota tribe. Currently, only Crazy Horse’s face has been engraved in the mountain, and it’s already 27 feet taller than Mount Rushmore. When construction of the monument is finished, it will depict the tribal leader on a horse, pointing into the distance. This pose was chosen based on a legend in which Crazy Horse points to the horizon and says, “My lands are where my ancestors are buried.” However, sculptors might want to rethink that final pose. According to the Manataka American Indian Council, pointing with the index finger is actually considered an offensive gesture in most Native American traditions. Read about the famous American landmarks that almost didn’t exist at all.

Any typo is embarrassing for the person who made it. But misspelling the work of a literary great, in the place where he spent most of his life, might take the typo cake. Literary fanatics were outraged when a statue of Edgar Allan Poe in Baltimore’s Wyman Park contained not one but two errors. The statue, which went up in 1921, managed to pack two typos into a single line from Poe’s poem “The Raven”: “Dreaming dreams no mortal ever dared to dream before.” But on the statue, it was multiple “mortals” doing the dreaming—or, rather, the “dreamng.” Fortunately, these typos remain no more. One literary fanatic, Edmond Fontaine, sent letter after letter to local newspapers, requesting that someone fix it. When no one did, he took matters into his own hands and expunged the errant “S” with a chisel. In the 1980s, the statue was moved to a new location, and the battered, typo-ridden base was replaced with a new one. 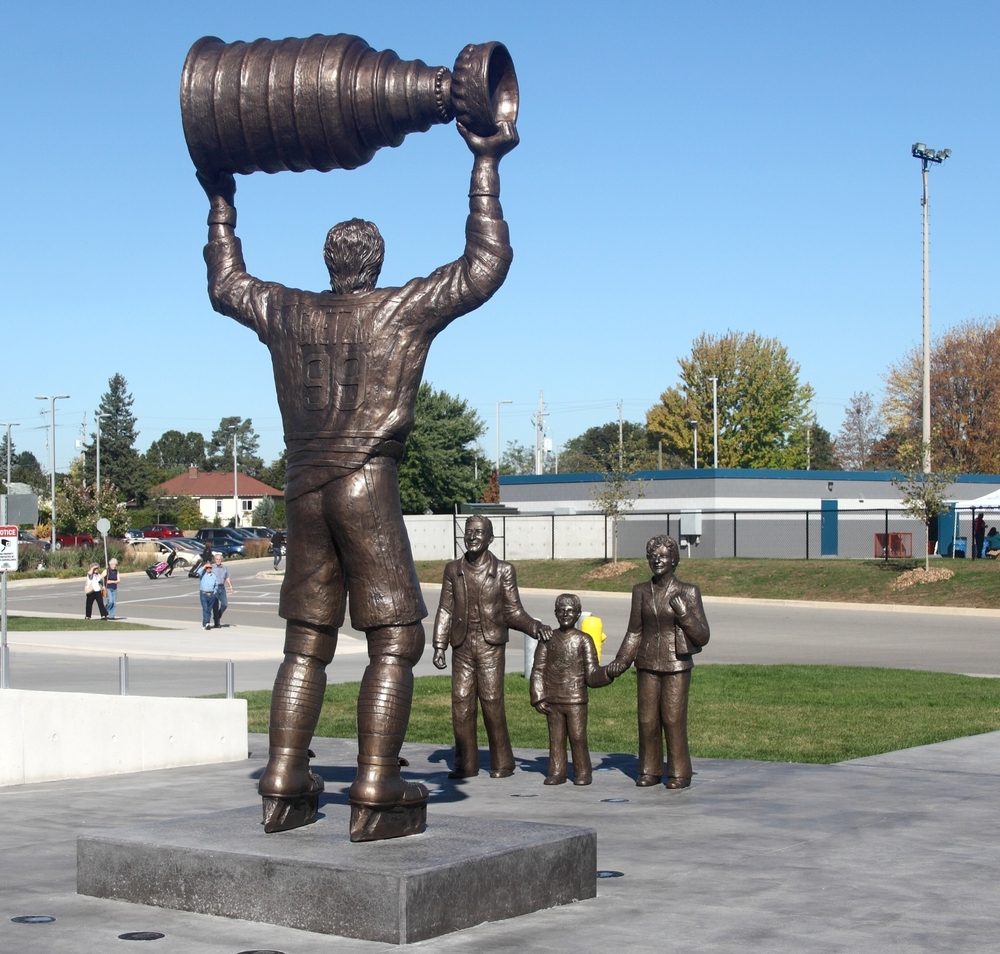 A non–hockey fanatic probably wouldn’t have seen anything wrong with the statue of Wayne Gretzky that appeared in front of the Sports Centre named for him in 2013. But an eagle-eyed young hockey fan almost immediately discovered that that statue was in fact riddled with typos—including Gretzky’s name! Twelve-year-old Joel Englund came to see the newly unveiled statue and discovered that it listed Gretzky as a player for the Detroit Red Wings. Gretzky played for four different NHL teams over the course of his career, but the Red Wings was not one of them. Even more cringe-worthy, the sculptor had misspelled Gretzky’s surname as “Gretzsky.” There were a couple other errors too, including incorrect Stanley Cup Championship dates. After Englund and his family alerted the local newspaper, the sheepish sculptor quickly promised to fix the errors. Next, find out which famous monuments are hiding little-known secrets.