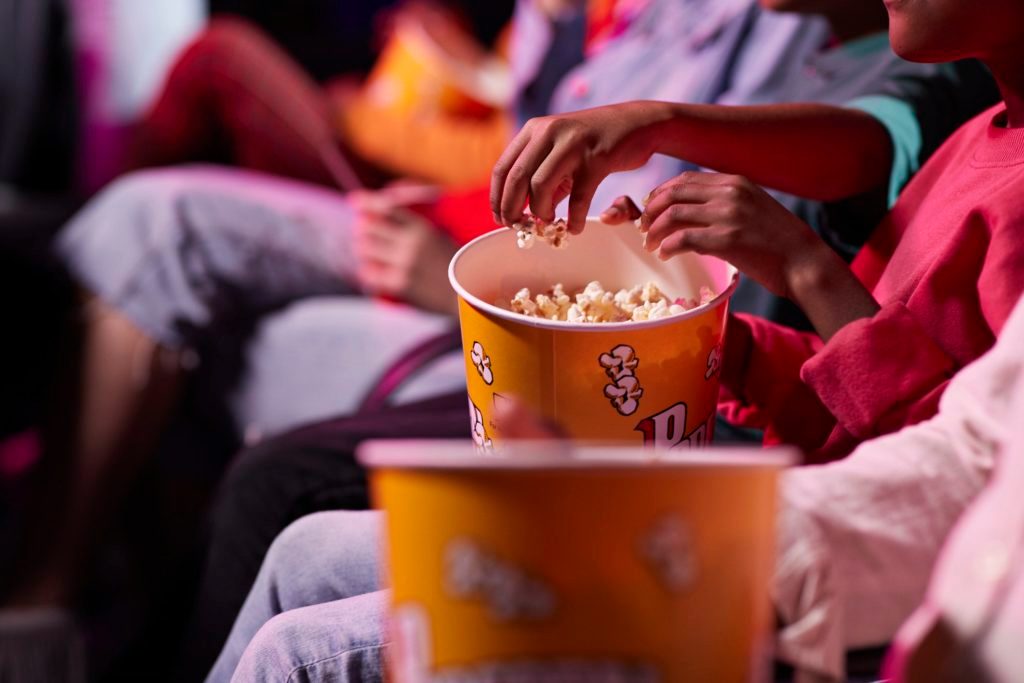 These movie facts will surely impress all the film aficionados and classic movie fans at a trivia night. From misplaced props to odd pay gaps and on-set injuries, you will definitely find some amusing surprises on this list. See how many you already know and make sure to brush up on these other trivia questions only geniuses get right. 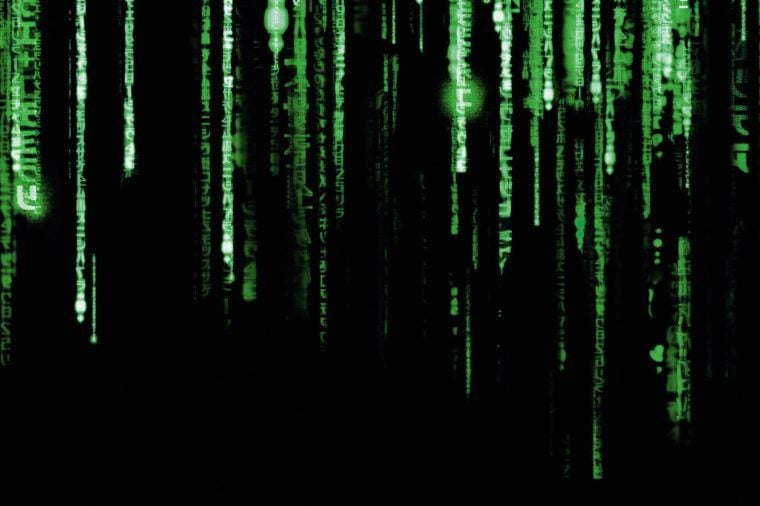 Movie Trivia Fact: The code in The Matrix comes from sushi recipes

Those green symbols trailing down in The Matrix aren’t complicated algorithms. A production designer scanned symbols from his wife’s sushi cookbooks, then manipulated them to create the iconic “code.” 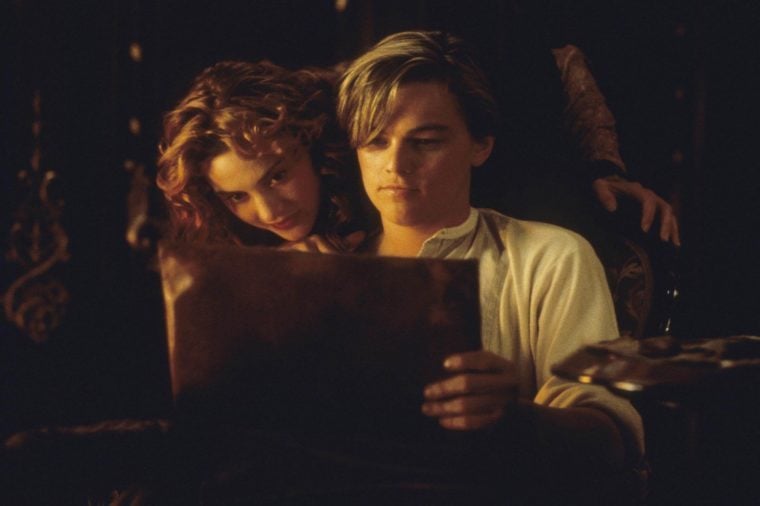 Unlike Jack’s French girls, Kate Winslet wore a bathing suit while Cameron sketched the picture. For more movie trivia, learn the hilarious working titles of Titanic and other famous movies. 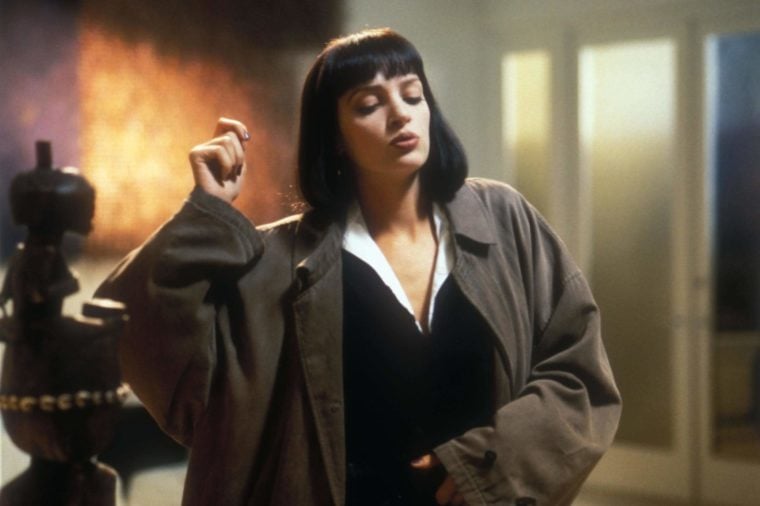 When Uma Thurman’s character is having an overdose, it looks like John Travolta sticks a needle in her to revive her. Actually, Travolta pulled the needle out, and the film was run backward to reverse the action. 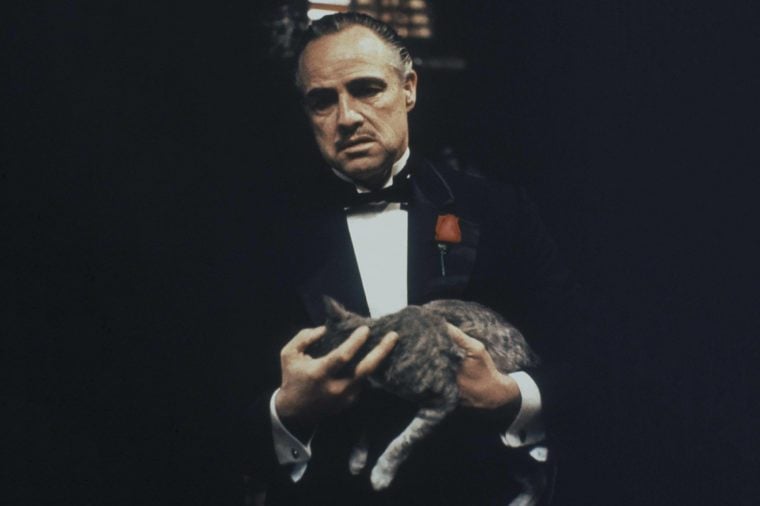 Movie Trivia Fact: The cat in The Godfather was a stray

Director Francis Ford Coppola found the cat in the studio and handed it to Marlon Brando before the shot. This next movie trivia fact is so cute—the cat loved the actor so much that it stayed in his lap and purred so loudly that the crew was afraid the noise would drown out the dialogue. Trivia lovers–test your knowledge with these Jeopardy questions you can’t refuse. 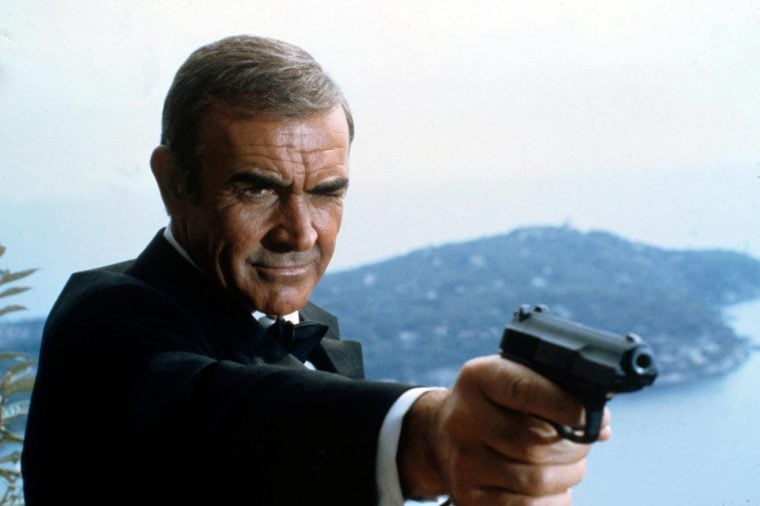 If you think the dreamy 007 seemed too good to be true, you’re right. Sean Connery started balding at age 17. Make sure you put these 12 greatest spy movies of all time on your streaming list for more ammo for your next movie trivia night. 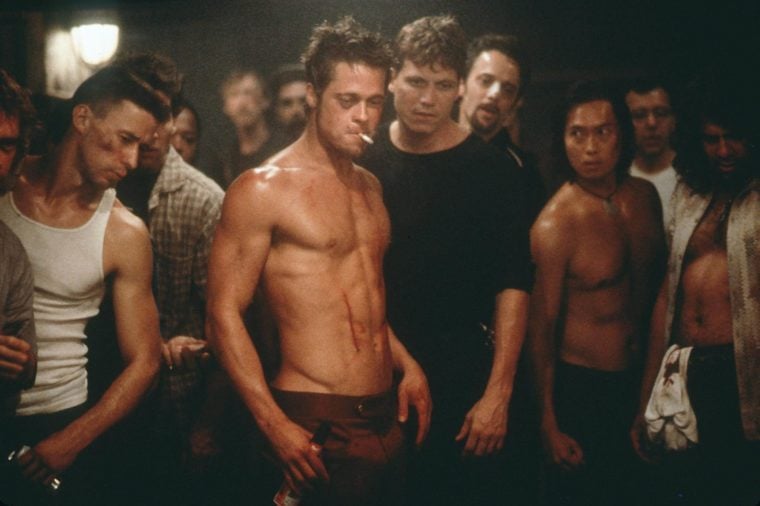 Director David Fincher thought the Starbucks shops popping up on every block of LA in the late ‘90s was “too much of a good thing,” so he poked fun of the coffee chain in Fight Club. He’s claimed to have sneaked a Starbucks cup into every shot, with the permission of the chain—with one exception. Starbucks didn’t want its shop destroyed on film, so that scene uses the made-up Gratifico Coffee instead. Find out what the most popular movie was the year you were born. 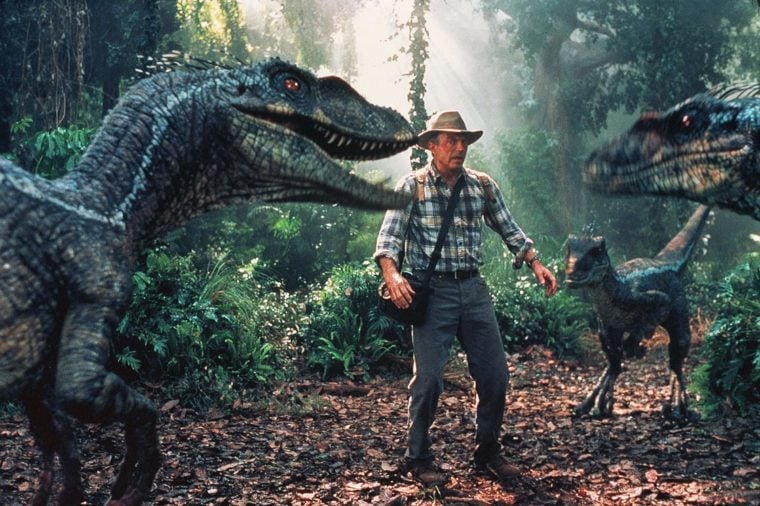 Movie Trivia Fact: Some of the velociraptor noises in Jurassic Park are actually tortoises mating

At least that’s what the sound designer used when the raptors were communicating. Other scenes of the species used horse breathing and goose hisses. Find out what scientists say T-Rexes actually sounded like. (Hint: It’s not turtle sex—or a roar.) 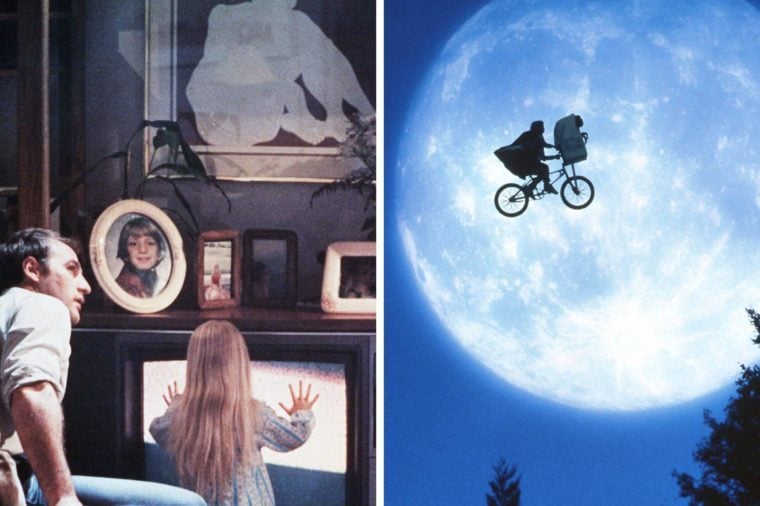 Steven Spielberg was going to produce filmmaker’s John Sayles’ Night Skies script about a rural family invaded by aliens that could kill with a touch of the finger but decided to go a more family-friendly route with the story by creating E.T. The Extra Terrestrial. Sayles wouldn’t rewrite the script, but Spielberg kept the idea for Poltergeist. 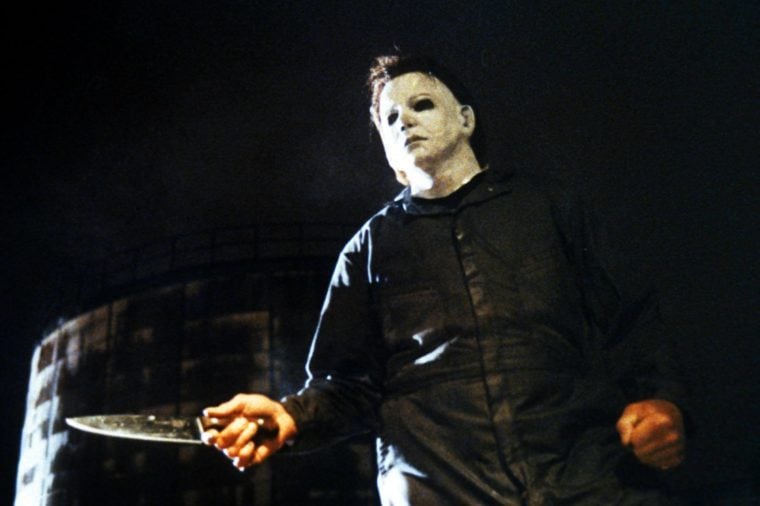 Or specifically, his Star Trek character, Captain Kirk. There wasn’t money in the 1978 horror film’s budget to create a custom mask, so the art director bought a clown and a Captain Kirk mask. The crew spray-painted it white and adjusted the eyes and hair to create the terrifying mask. 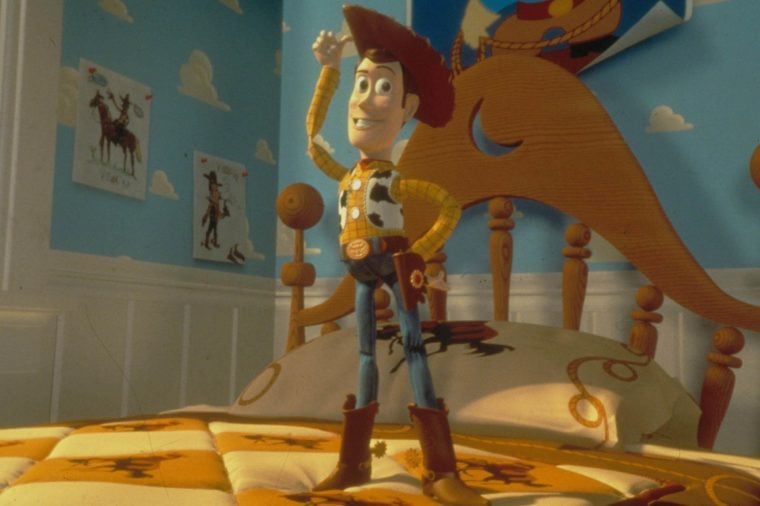 Even in later versions, he was written as a “sarcastic bully” trying to rally the other toys against Buzz. Luckily, the studio decided to transform him into a more lovable character. See if you can answer these 13 cartoon trivia questions about your favorite animated classics. 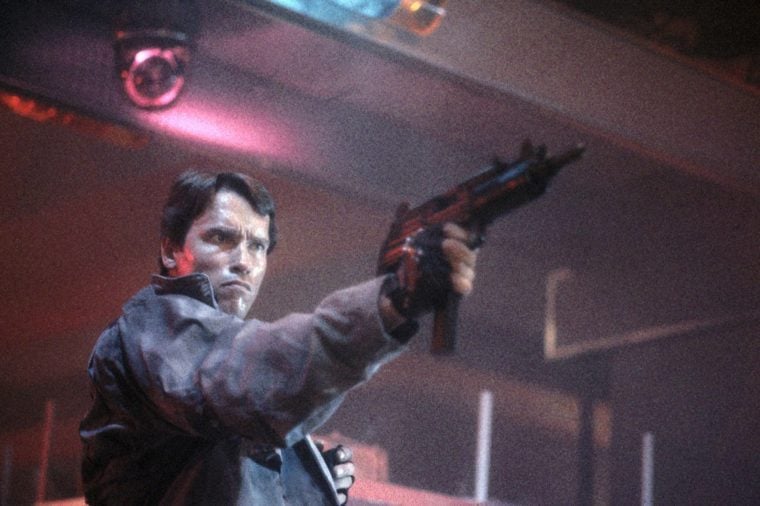 Movie Trivia Fact: O.J. Simpson was considered for the lead in The Terminator

Director James Cameron rejected the choice because he didn’t think the “this likable, goofy, kind of innocent guy” could pull off a cyborg assassin. 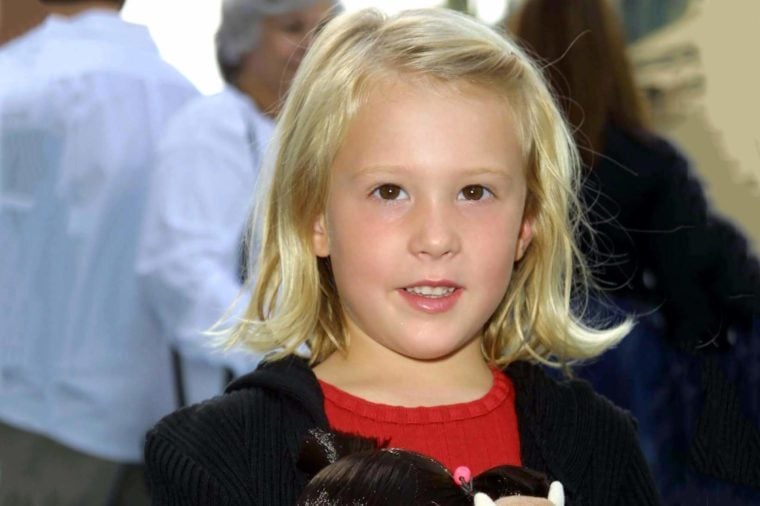 At two and a half, Mary Gibbs had trouble sitting still through the scenes, so the crew would follow her around with a microphone. They’d tickle her or take candy away to make her laugh or cry, so the emotions are as real as they sound. 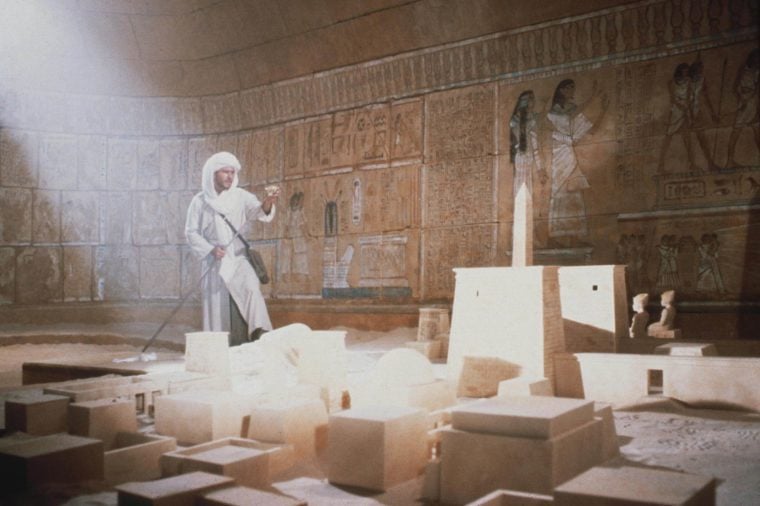 Look closely at the scenery in Raiders of the Lost Ark and you’ll notice hieroglyphics with the robots’ likeness in two scenes. Put your movie trivia knowledge to the test with these Disney movie trivia questions. 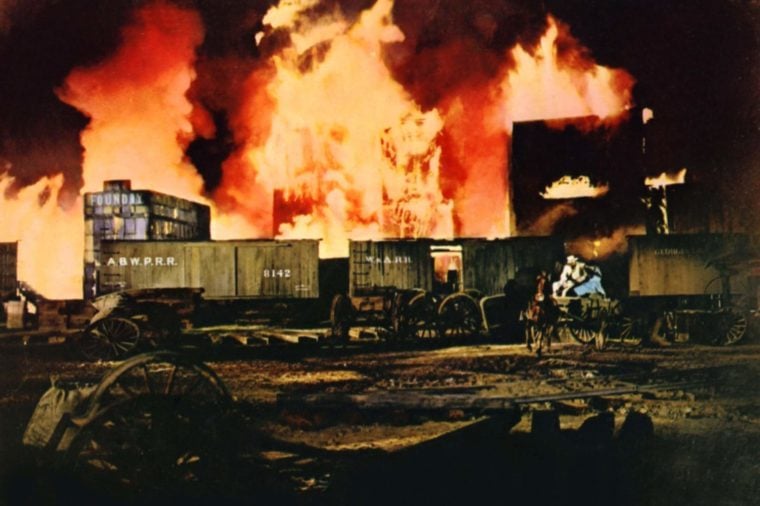 The filmmakers had to get rid of the old sets to make room for the new movie’s scenery anyway, so burning them and filming it as “Atlanta” going down in flames accomplished both. The filmmakers are lucky it worked—they shot the blaze even before the movie’s cast was confirmed. Don’t miss these other incredibly romantic movies you’ve never seen. 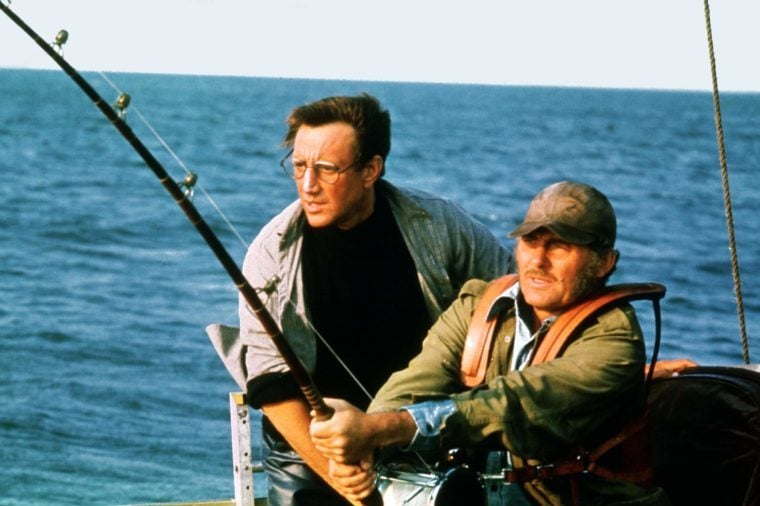 First of all, the line was “You’re gonna need a bigger boat,” not “we’re,” as it’s often misquoted. The line wasn’t in the original script but was an inside joke among the Jaws crew, teasing the stingy producers for picking a support boat that was too small to hold the equipment. Actor Roy Scheider ad-libbed the line throughout filming, but the one kept in the final cut became one of the most remembered movie quotes of all time. Check out these 46 quotes that will make you miss your favorite movies and TV shows. 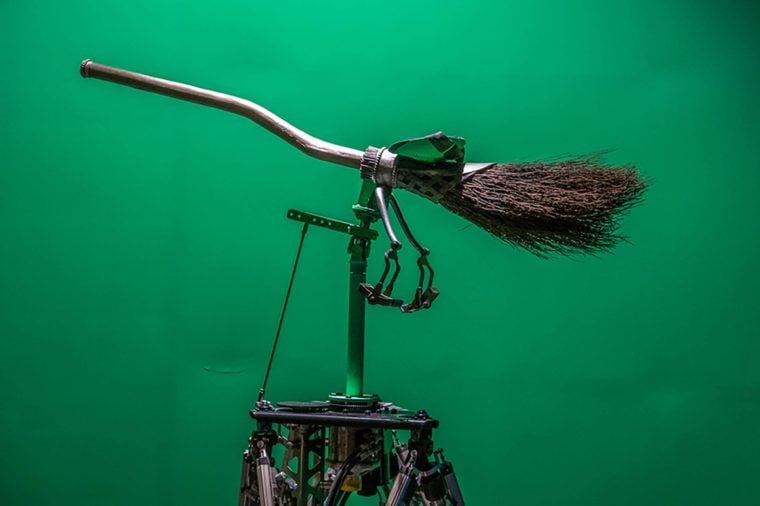 Movie Trivia Fact: A Harry Potter stunt double was paralyzed on the job

David Holmes did the stunt doubles for Daniel Radcliffe in every Harry Potter movie, but an accident during a flying broomstick scene in the last movie left him paralyzed from the neck down. Radcliffe organized a celebrity charity auction to pay for his medical bills, and Holmes now runs a production company with two other quadriplegic friends. 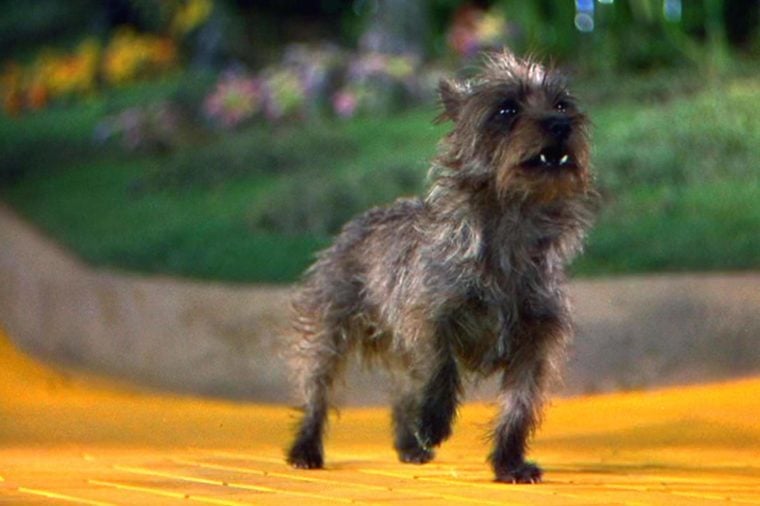 Movie Trivia Fact: Toto was paid more than the Munchkins in The Wizard of Oz

The Munchkin actors received $50 a week—which was a good wage at the time—while the dog earned $125 a week. Not in Kansas anymore? Check out the most iconic movies set in every state for more movie trivia facts. 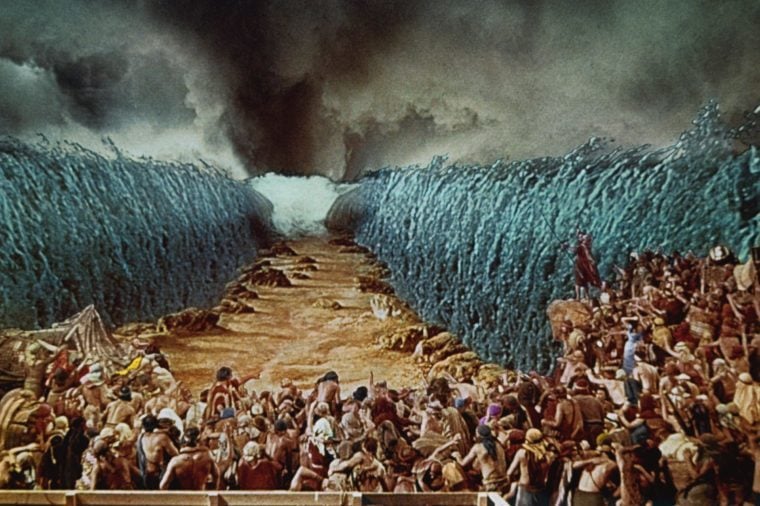 Movie Trivia Fact: The set for The Ten Commandments was buried underground for decades

Cecil B. DeMille, director of the 1923 silent film The Ten Commandments, thought the movie set—including 21 Sphinx replicas—was too valuable to let other filmmakers get their hands on it. He figured it was cheaper to bury the set than to move it, and the artifacts remained underground near the California coast for 94 years before archaeologists found the 300-pound head in 2017. 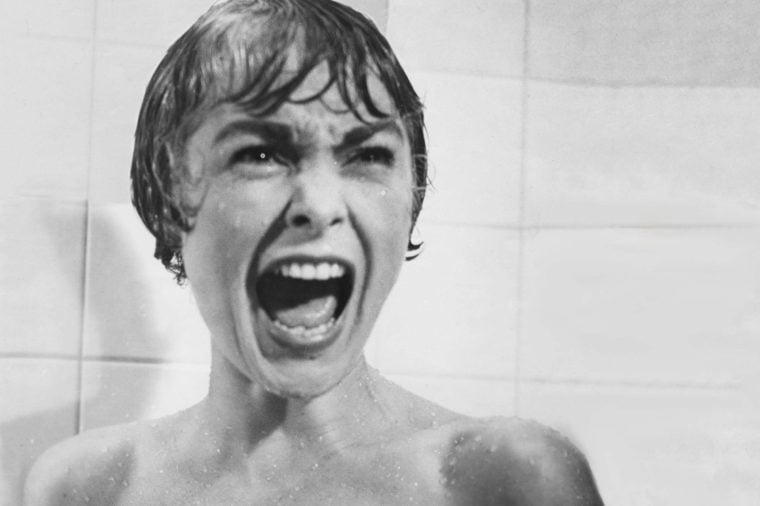 Movie Trivia Fact: Psycho was the first movie to show a toilet flushing

At the time, the Motion Picture Production Code banned flushing toilets because it was considered filthy. Psycho was a key to putting the censoring code to an end. For more pop culture trivia, check out these little-known facts about the greatest songs of all time. 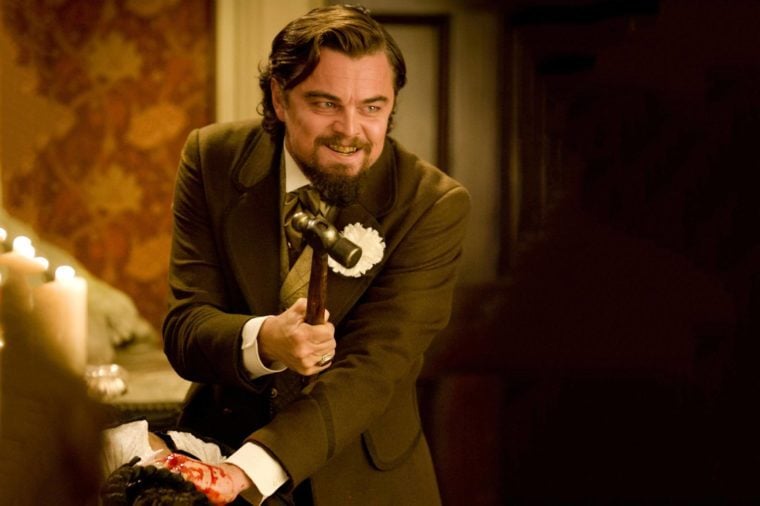 During one of Leonardo DiCaprio’s big scenes in Django Unchained, his racist rant is heightened when he slams down on a table and cuts his hand on a glass. It might look like special effects, but it wasn’t in the script. The actor really did hurt his hand without stopping the scene, and the blood you see is real. 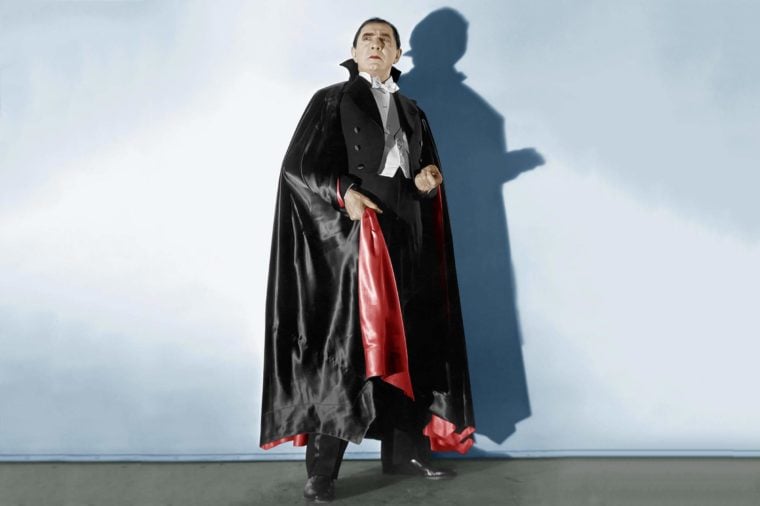 Movie Trivia Fact: Dracula was filmed in English during the day, and in Spanish at night

When the 1931 movie Dracula was being shot, it was common for foreign-language films to take over the set at night and shoot their own versions instead of dubbing over them later. The Spanish-language version—which used the same script and set—wrapped up in about half the time and earned way better reviews than its English-language counterpart. 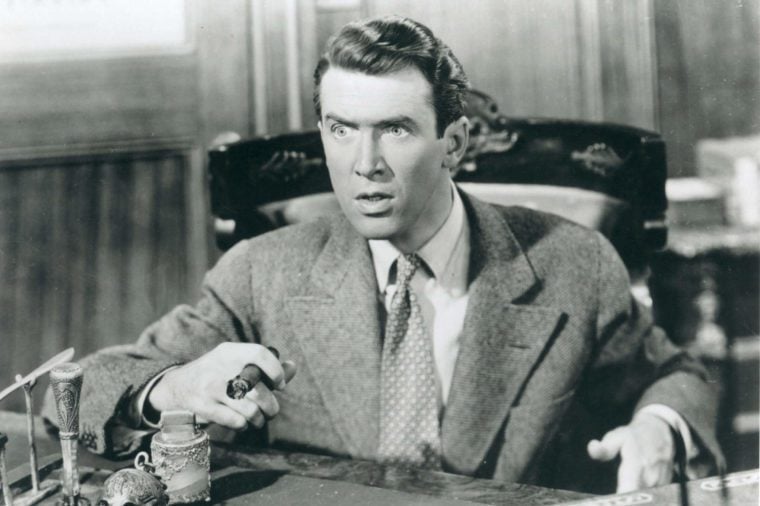 Movie Trivia Fact: Jimmy Stewart did not want to do It’s a Wonderful Life

The lead actor had returned from spending 15 months in World War II combat as a pilot and was considering quitting acting. He initially said a film about suicide was the last thing the country (and he, as someone dealing with PTSD) needed, but he reluctantly agreed. It’s a Wonderful Live ended up re-launching his acting career. Now that you’ve got your movie trivia down, check out these pop culture trivia questions people always get wrong.