The National Aeronautics and Space Administration, better known as NASA, started operating 61 years ago this October. There has been a lot to celebrate! 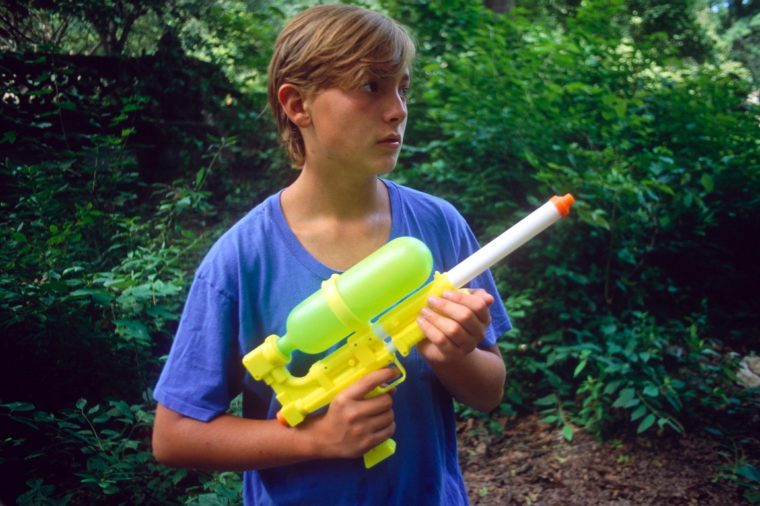 NASA is credited (wrongly) with inventing Velcro, Tang, and Teflon—myths it busts on its own website, although it does point out that these products were all used by NASA programs at one point or another after they were invented. But this invention is indisputable: the Super Soaker water gun, which was created by former NASA systems engineer Lonnie Johnson—as are these 15 other items that were invented by NASA. 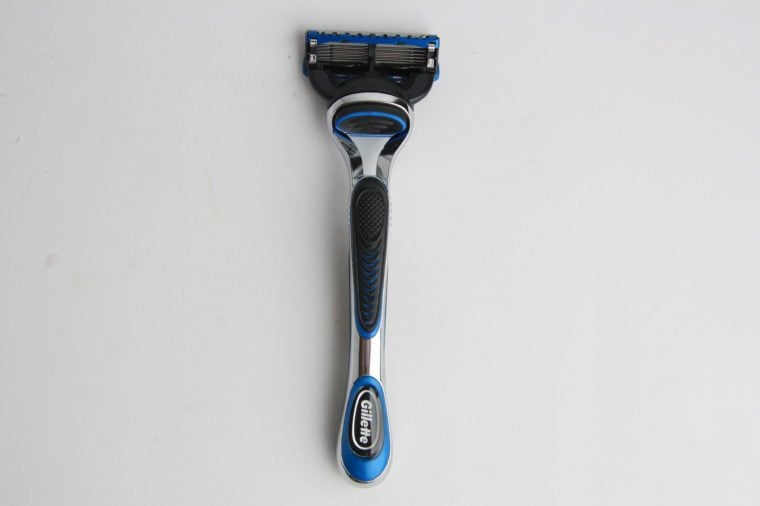 The history of NASA is a history of almost uncountable firsts, including the first time anyone ever shaved in space. That honor went to the crew of Apollo 10, who broke out safety razors, shaving gel, and damp washcloths to scrape the stubble off their chins on their way home after four days in space in 1969, where they simulated a moon landing to help preparations for Apollo 11, reports Space.com. 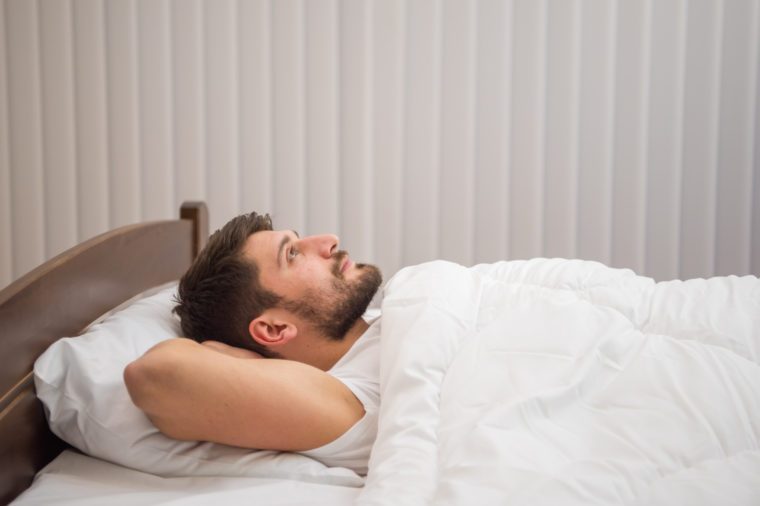 Your rest is their gain

According to NASA, a meaningful way to study the effects of prolonged weightlessness on the human body is to study people who stay in bed for long periods of time. So, they’re paying people $19,000 to keep vertical for two months at a time—although, as CNBC reports, that position is likely to change (literally) as NASA scientists put you and your bed through a centrifuge. 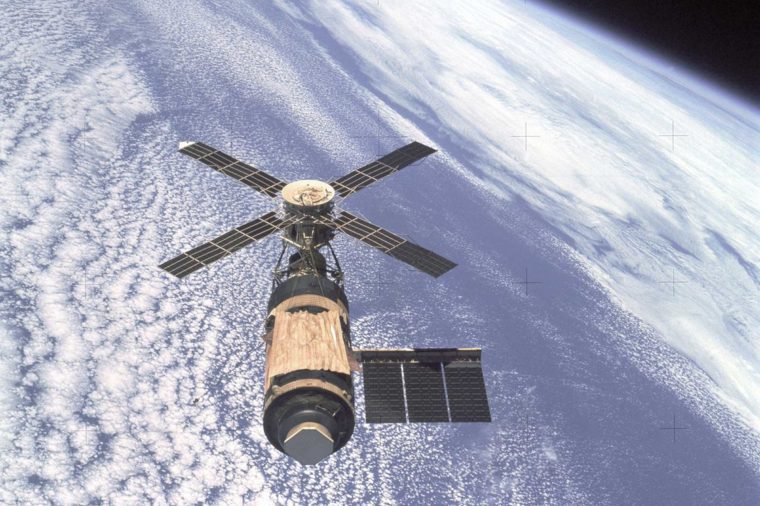 “Following cancellation of Apollo 18, 19, and 20, we had a lot of hardware lying around gathering dust,” according to NASA’s history site, “so we put it to some remarkably good use.” Namely, they used equipment like Apollo’s Command and Service Modules and its Telescope Mount, to build Skylab in 1973, the United States’ first space station. 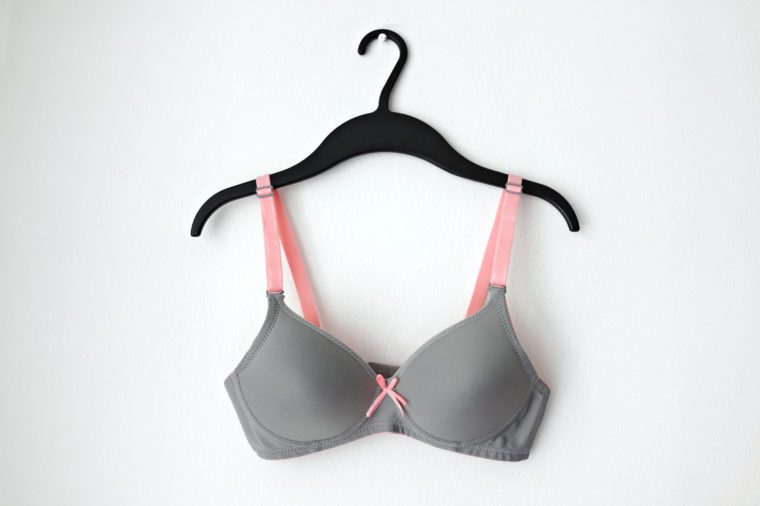 When NASA needed to build spacesuits for Apollo 11—celebrating its 50th anniversary this year—it tapped bra and girdle manufacturer Playtex to create garments that could withstand temperatures of 1,000 degrees Fahrenheit and withhold the necessary pressure to keep the astronauts alive…but still be plenty flexible. The company invented a fabric made of Teflon-coated microfibers for the task, according to Smithsonian Magazine. 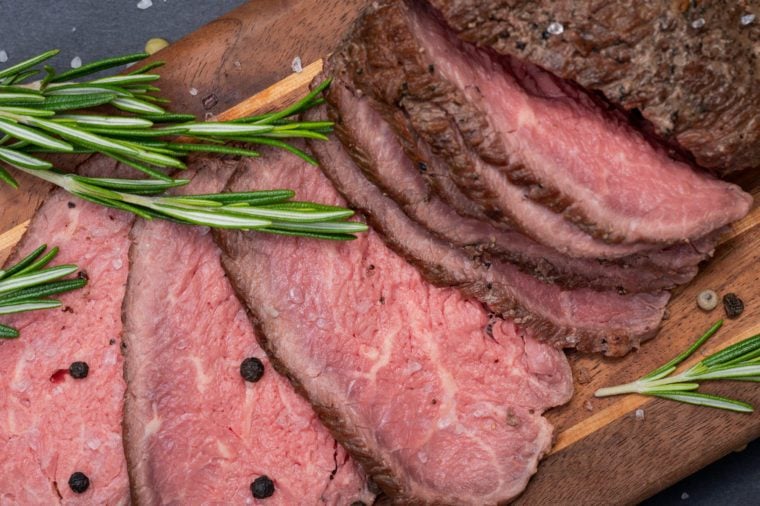 In 1965, the Gemini 3 mission sent astronauts John Young and Gus Grissom around the Earth three times. Young actually smuggled a corned beef sandwich onto the spacecraft—the first known case of edible contraband in space. You can read the NASA transcript of the conversation between co-pilot Grissom and Young, in which Young admits that bringing it along was a bad idea (it started to break apart almost immediately). 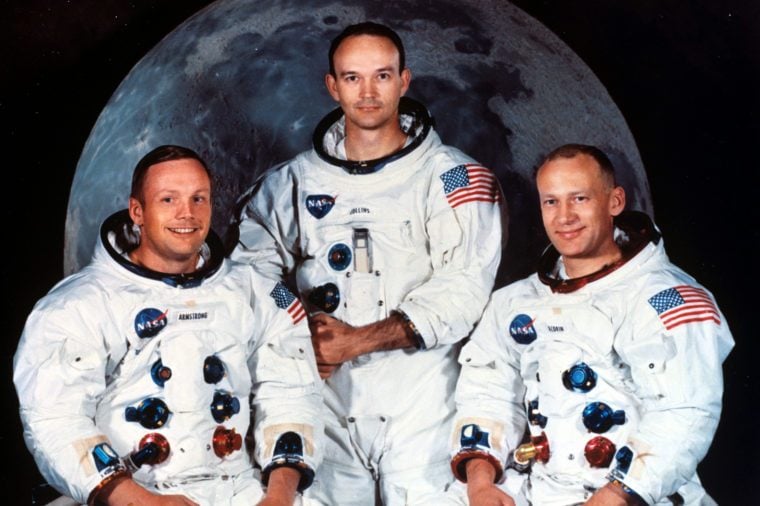 Cashing in on fame

Apollo 11 is celebrated as the first time humans walked on the moon. But the three astronauts who manned the mission—Neil Armstrong, Buzz Aldrin, and Michael Collins—couldn’t get any company to issue them life insurance before they blasted off into space, reports NBC News. To provide for their families in case they didn’t make it back to Earth, they autographed envelopes and postcards that friends postmarked with their launch and landing dates, which could be sold for big bucks to space enthusiasts in the event they didn’t make it back alive. 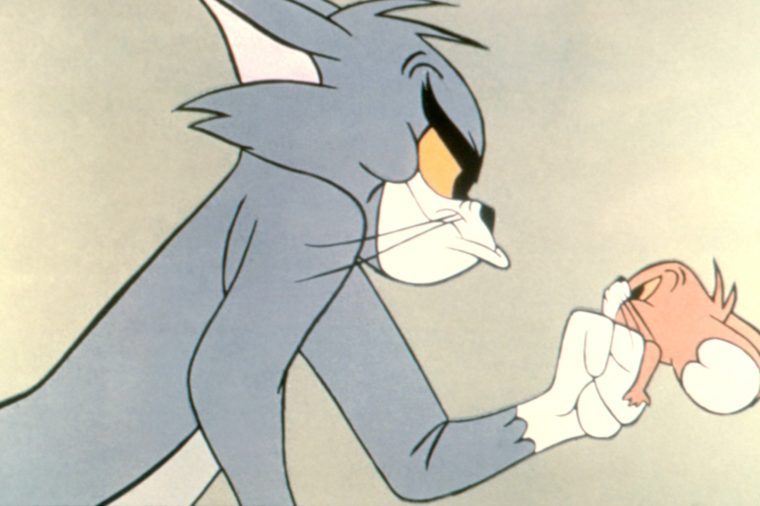 So much so that it named two of its satellites “Tom” and “Jerry,” after the cartoon cat and mouse first introduced to American audiences in 1940. The space-age duo can be found “chasing” each other as they orbit the earth as part of NASA’s Gravity Recovery and Climate Experiment Follow-On (GRACE-FO) mission, to measure our planet’s gravitational field. 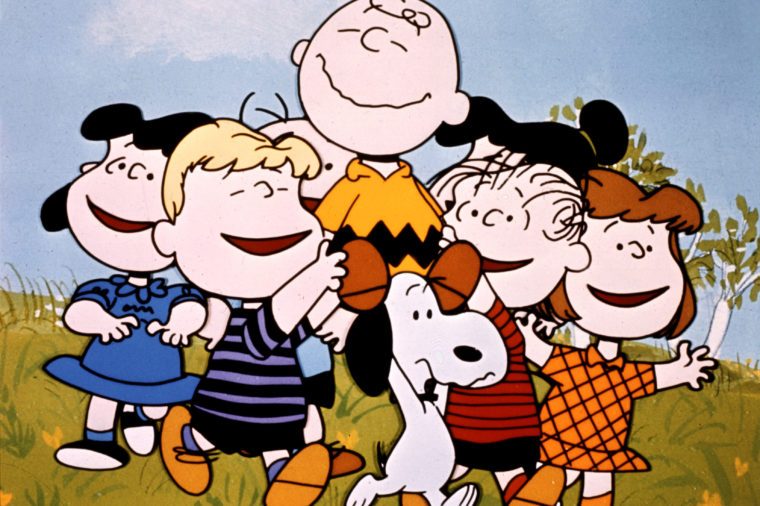 One comic icon in particular—and that’s Charles Schulz’s Snoopy, along with this longstanding companion, Charlie Brown. They lent their names to the lunar and command modules, respectively, for Apollo 10. But as PBS reports, the association went deeper, with the astronauts bringing Snoopy and Charlie Brown artwork with them into space. 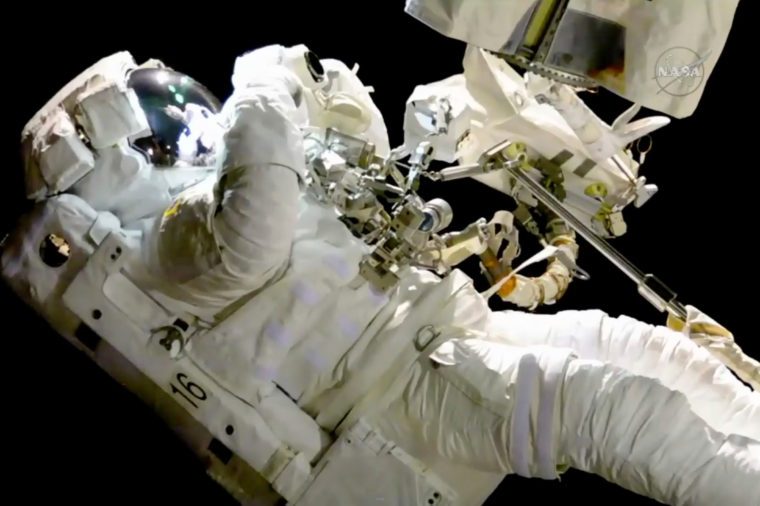 Archival photos of Apollo 11 moonwalker Aldrin show him testing out a jetpack in advance of his mission. Although the intention was for the crew to use this state of the art equipment, the plan was scrapped—much to Aldrin’s chagrin. On the upside, according to Science 101, jetpacks are all standard-issue astronaut gear today. 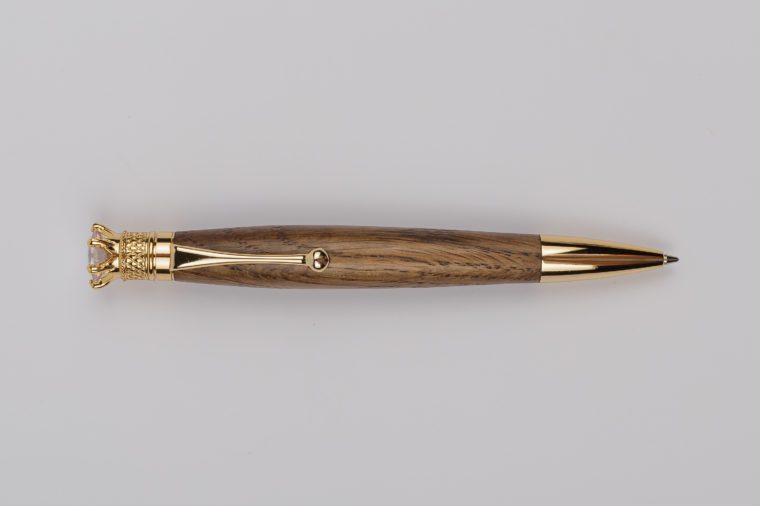 Leading the way in improvisation

This comes as no surprise to anyone who’s watched the largely accurate portrayal of the ill-fated Apollo 13 mission and the ways in which NASA scientists on Earth worked miraculous fixes that could bring the crew safely home. But NASA astronauts themselves are no improvisational slouches, either. Apollo 11’s Aldrin actually used a ballpoint pen to fix an essential but broken arming switch in the lunar module, reports NBC. 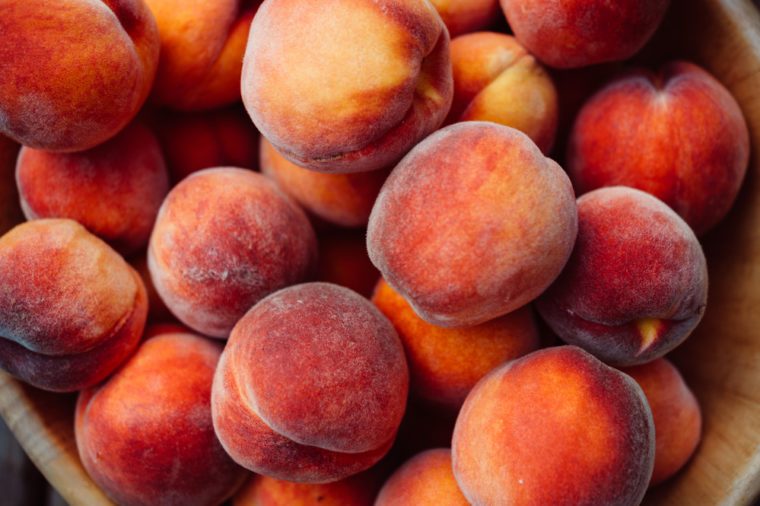 We talk about last meals. What about the first meals—on the Moon? The first-ever was consumed by Aldrin and Armstrong and consisted of bacon squares, peaches, sugar cookie cubes, pineapple-grapefruit drink, and coffee, all of which were stashed in the lunar module and consumed beside the Sea of Tranquility, reports Smithsonian Magazine. While coffee is a must, these other foods are banned from space. 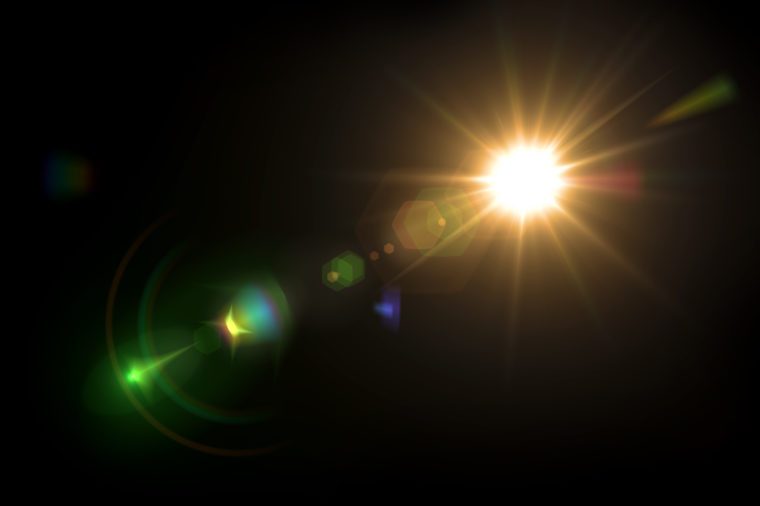 But it’s for the benefit of our entertainment, stuck as we are back on our home planet. To wit: As Science 101 reports, Alan Shepard, who was on the first manned NASA flight, told reporters that the view from space for the 15 minutes he got to enjoy it was “beautiful” and “brilliantly clear.” The truth: the sun-blocking filter on the periscope he looked through also blocked out most of that beauty and clarity. Want to see our planet from space? Don’t worry, we have gorgeous photos of blizzards from space for you. 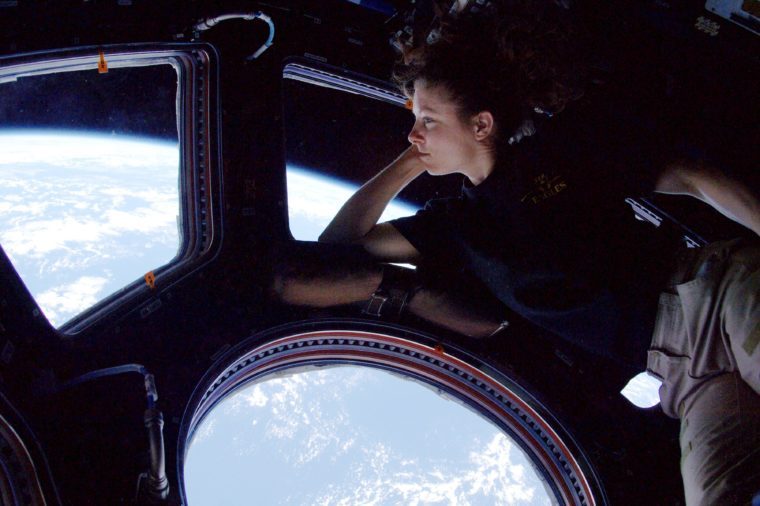 Being in space can be isolating and depressing, so NASA has worked hard to mitigate the effects of the long days, weeks, and months astronauts are trapped in small vessels. For example, Wired reports that on the International Space Station, NASA and its partner space programs around the world made sure there was a large-windowed cupola included in the design that astronauts could visit when they needed some personal and private time. 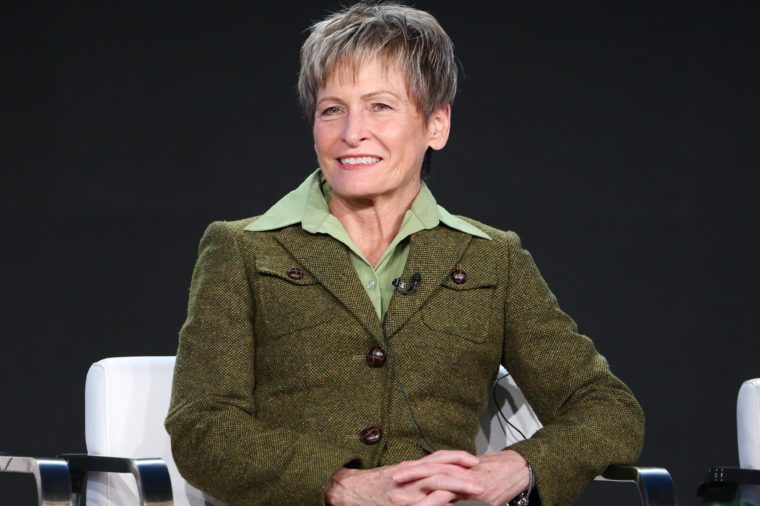 The first U.S. woman in space was actually the third woman of all—Sally Ride, on the space shuttle Challenger, following in the footsteps of Soviet cosmonauts Valentina Tereshkova and Svetlana Savitskaya on the Soyuz T-7 mission. The first woman space station commander, though, was all-American: Peggy Whitson, who took on the role in 2008. She’s also the first woman to command the space station twice—the second time was in 2016, according to Space.com. Mae Johnson was the first African-American woman in space, in 1992. Here’s what life was really like for Whitson and the other astronauts on the international space station. 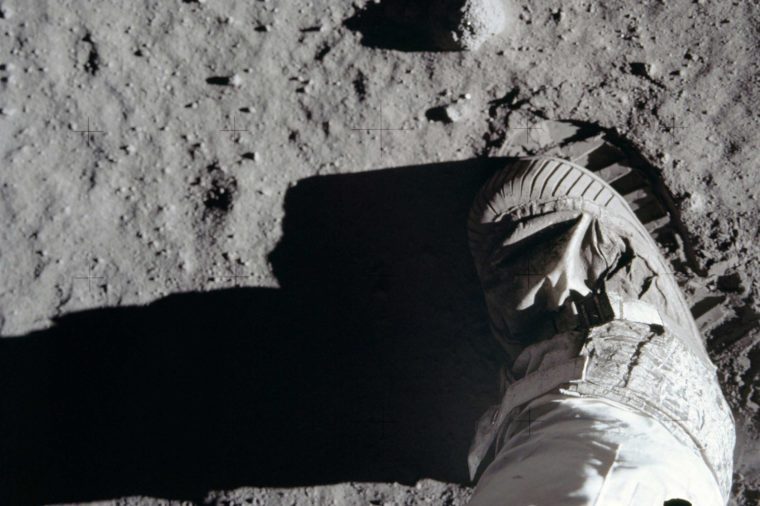 Armstrong’s footprints remain in the lunar dust 50 years after he first walked the Moon’s surface. But that’s not all that NASA and other space agencies have left behind there. Visitors to the orb would find all manner of equipment, clothing, flags, plus bags of urine, feces, and vomit, along with these other bizarre items that have been left behind on the Moon. 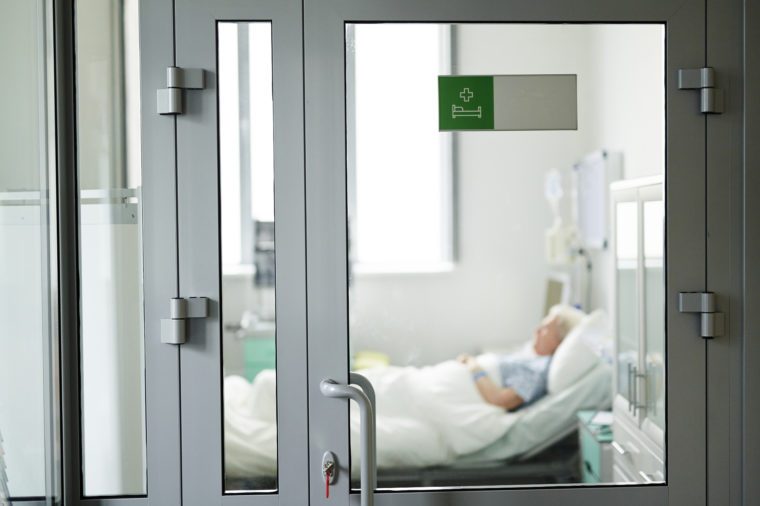 We know now that there’s nothing alive on the Moon—or anywhere else in our solar system that we’ve yet confirmed. But back when Apollo 11 returned home from its visit, NASA was concerned about the possibility of “lunar germs,” reports NBC News. So, it quarantined the mission’s astronauts for three long weeks. 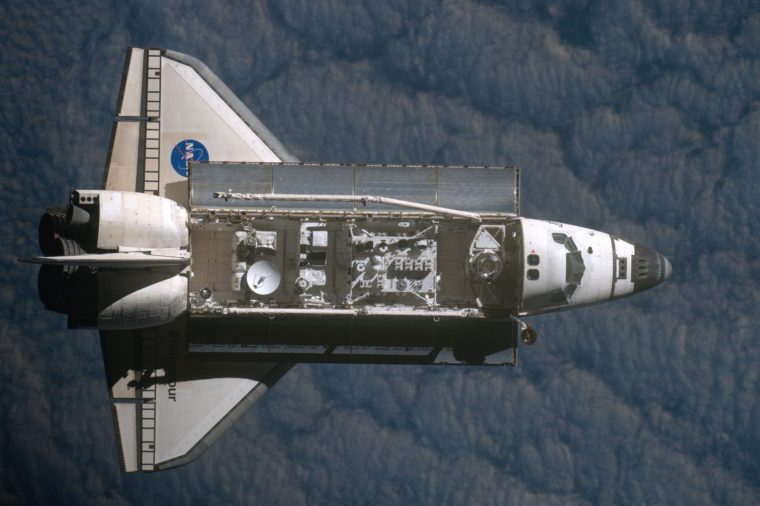 NASA tech at its finest

The agency is a leader in tech of all kinds. But some tech has benefits that resonate far beyond the mission at hand. For example, in 2004, U.S. astronaut Mike Fincke was 230 miles from Earth aboard the International Space Station when his daughter was born. But he didn’t have to miss the whole event; he was able to hear her first cries thanks to what NASA refers to only as state-of-the-art “communication technology.” 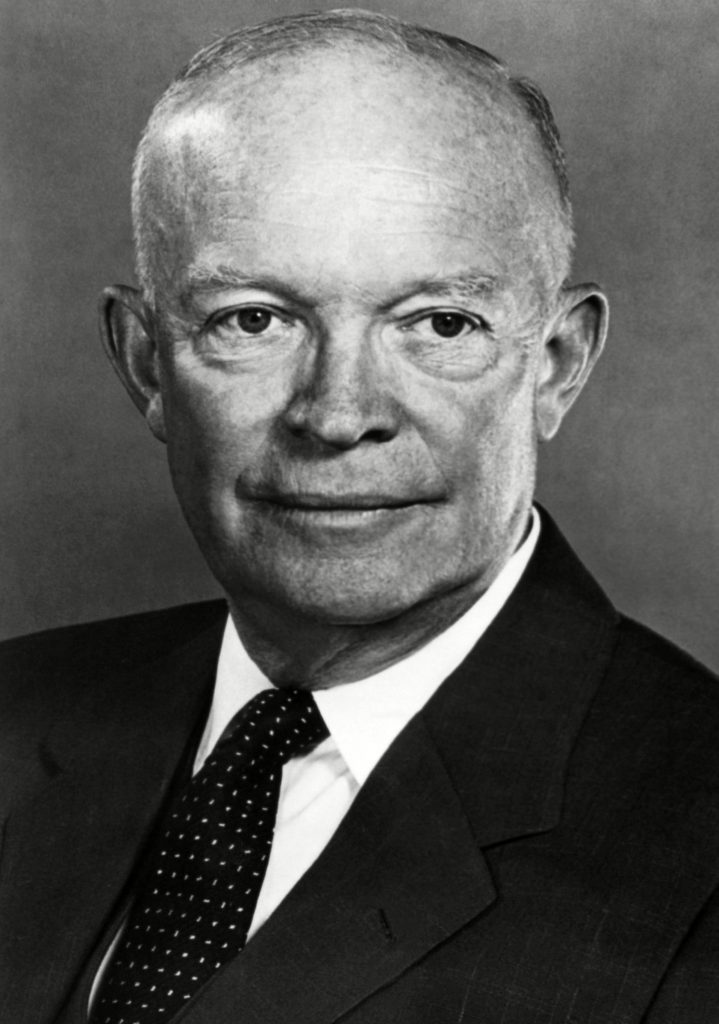 Some of NASA’s amazing firsts predate its missions to the Moon and beyond. In 1958, the Project Score communications relay satellite was sent into orbit, from which President Dwight D. Eisenhower’s Christmas message for that year was beamed out to anyone who might be listening, making the 34th president’s the first voice ever to be sent from space. 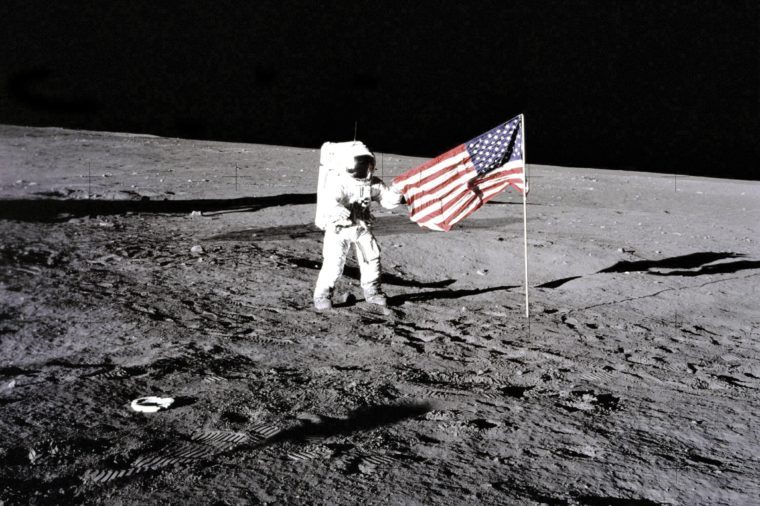 The moon flags were bought at Sears

According to NASA’s history site, the various 3′-by-5′ nylon flags that were sent to the moon on the Apollo 11 mission were all purchased at a Sears store in Houston, near the Manned Spacecraft Center. Apparently, NASA secretaries had been deployed to make these purchases on their lunch hours. The Moon isn’t the only surprising place you’ll find the American flag. 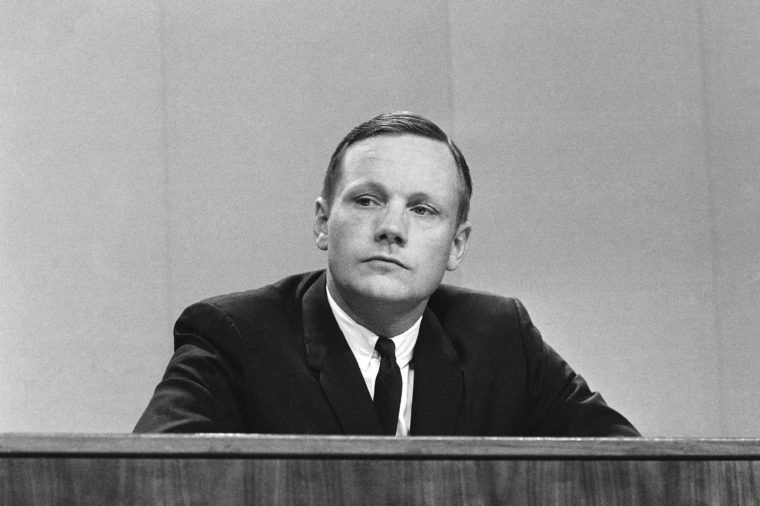 Armstrong is a household name, largely because of his walk on the Moon. But as Voice of America reported in the famed astronaut’s obituary, he almost didn’t get into NASA at all. Why? His application was a week late. It took the maneuverings of a friend on the inside to get his application moved to the pile of others still being considered. 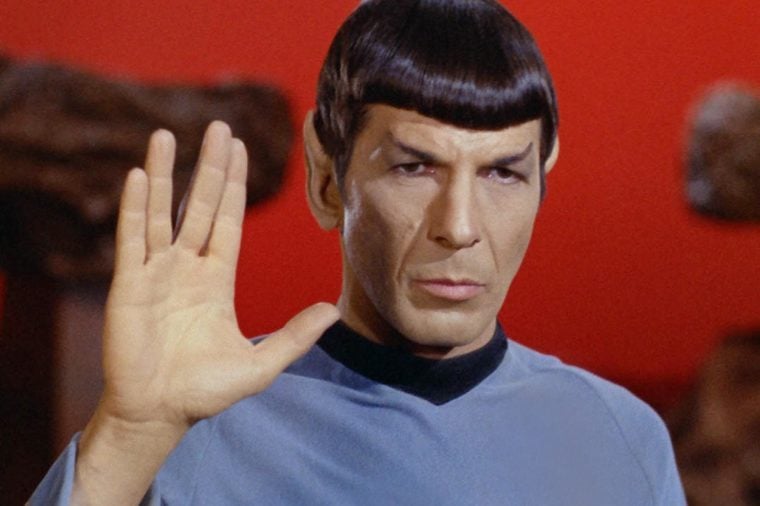 It’s been the dream of pretty much every Trekkie since Star Trek first aired in 1966—and every fan has probably uttered the words “Beam me up, Scotty,” several million times. As Gizmodo reports, NASA is currently hard at work on a real-life warp drive. One of its researchers predicts that such a drive could get humans to Alpha Centauri, 4.4 light-years away, in two weeks’ time. 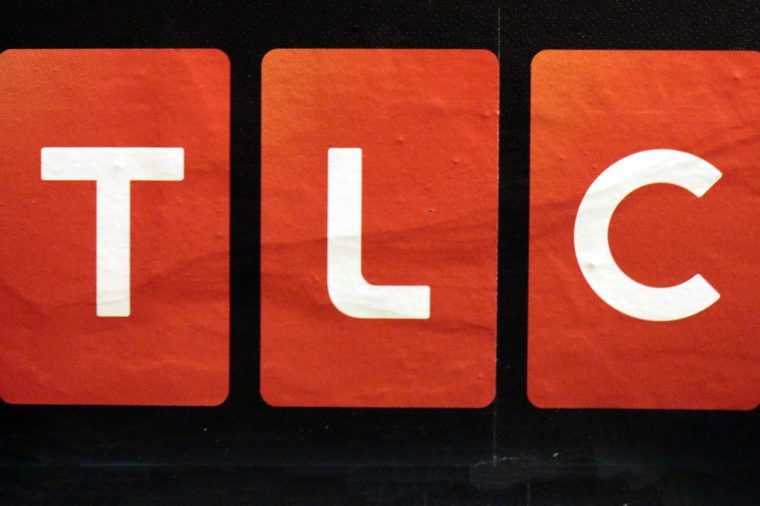 Today, The Learning Channel (TLC) may be filled with shows like 90 Day Fiancé and Little People Big World but it was actually the brainchild of NASA and the U.S. Department of Health, Education, and Welfare. They co-founded the station back in the 1970s as a learning channel that was be distributed free of charge via a NASA satellite, reports Business Insider. 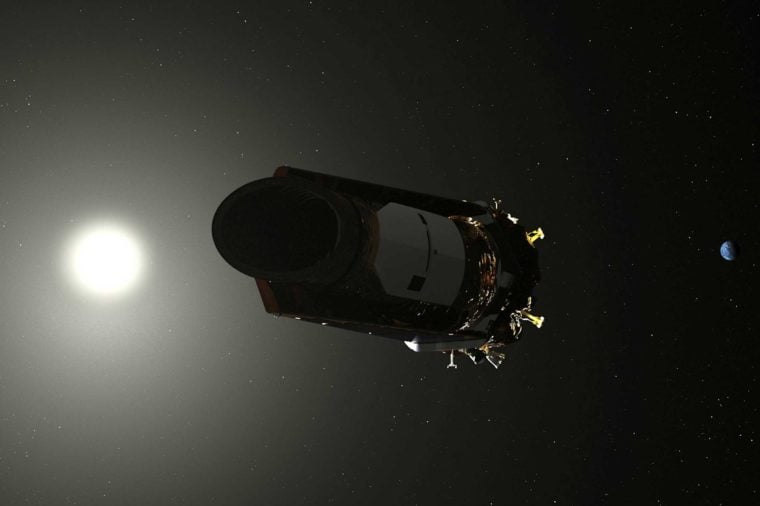 On September 11, 2019, NASA announced that the Kepler space telescope had discovered a potentially habitable world some 110 light-years away. NASA has been looking for life elsewhere in our universe for decades—on Mars, on Titan, any place it can send a probe. This latest discovery, though, of water vapor and possibly clouds and rain on and around a distant planet, is a reminder of how vast our universe is, and how far we’ve come in exploring its nooks and crannies in NASA’s 61 years. Read on for the 12 UFO myths scientists wish you would stop believing.