13 Nature Words Everyone Gets Wrong

Weather vs. climate. Lake vs. pond. Swamp vs. marsh. With these simple tricks, you'll always know the difference between these nature words. 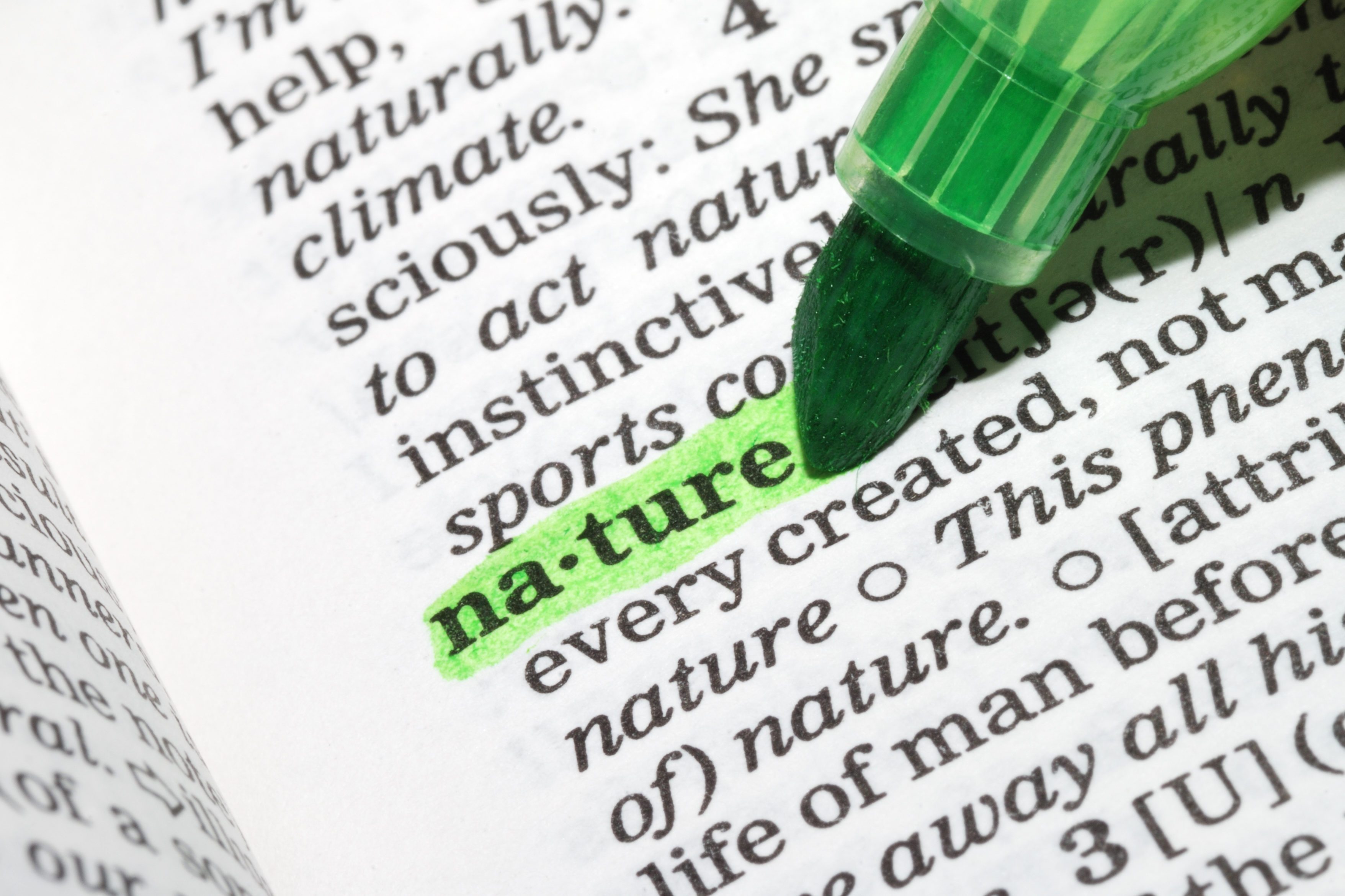 At some point in your life, you’re going to have a conversation with someone about the weather or nature around you. There are a few terms that people get confused and end up using wrong in a sentence, and if you’re making small talk with your new boss or a colleague it could be an embarrassing mistake. Here’s the difference between these nature words that everyone gets wrong. Also, make sure you learn about these words (and phrases) you’re probably using all wrong. 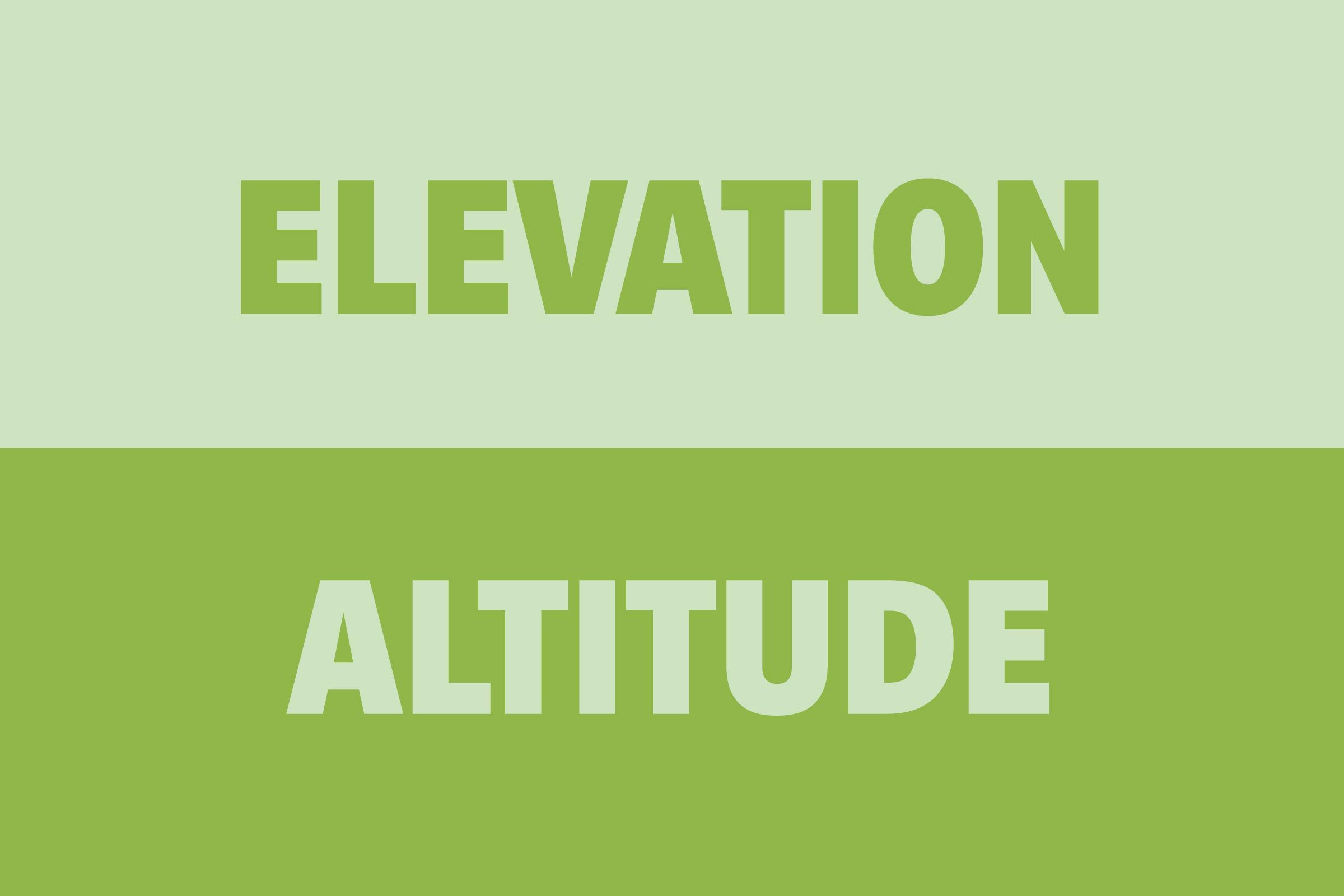 Elevation and altitude: What’s the difference? 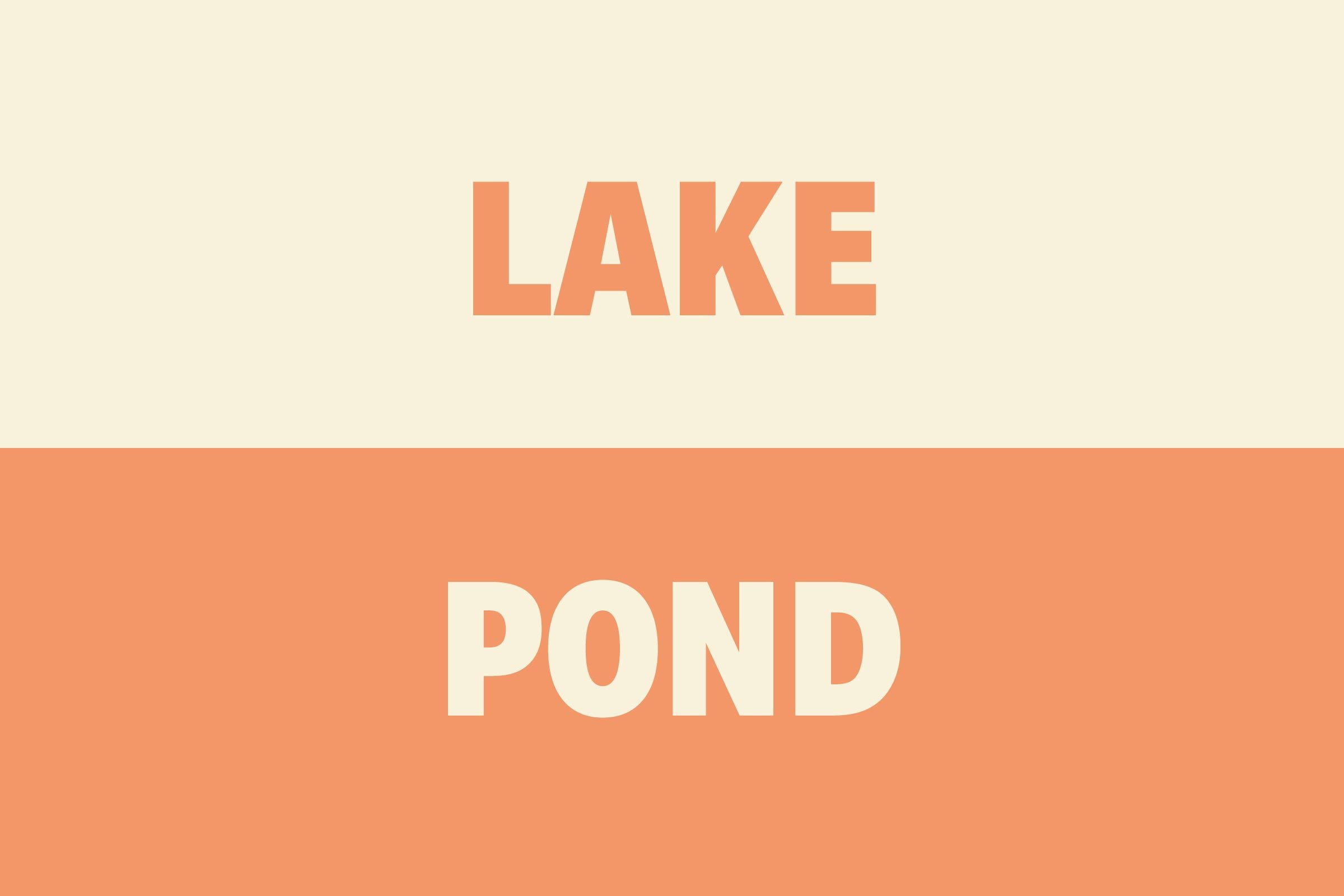 Lake and pond: What’s the difference?

Many small “lakes” could just as easily be called a pond, and the famed Walden Pond in Concord, Massachusetts, is actually a lake. The main distinction: A pond is shallow enough that light penetrates all the way to the bottom. Although there is no set size for either, most geographers agree that when a body of freshwater is bigger than 12 acres, it’s a lake. Smaller than that, it’s a pond. Check out these 20 words that are their own opposites. 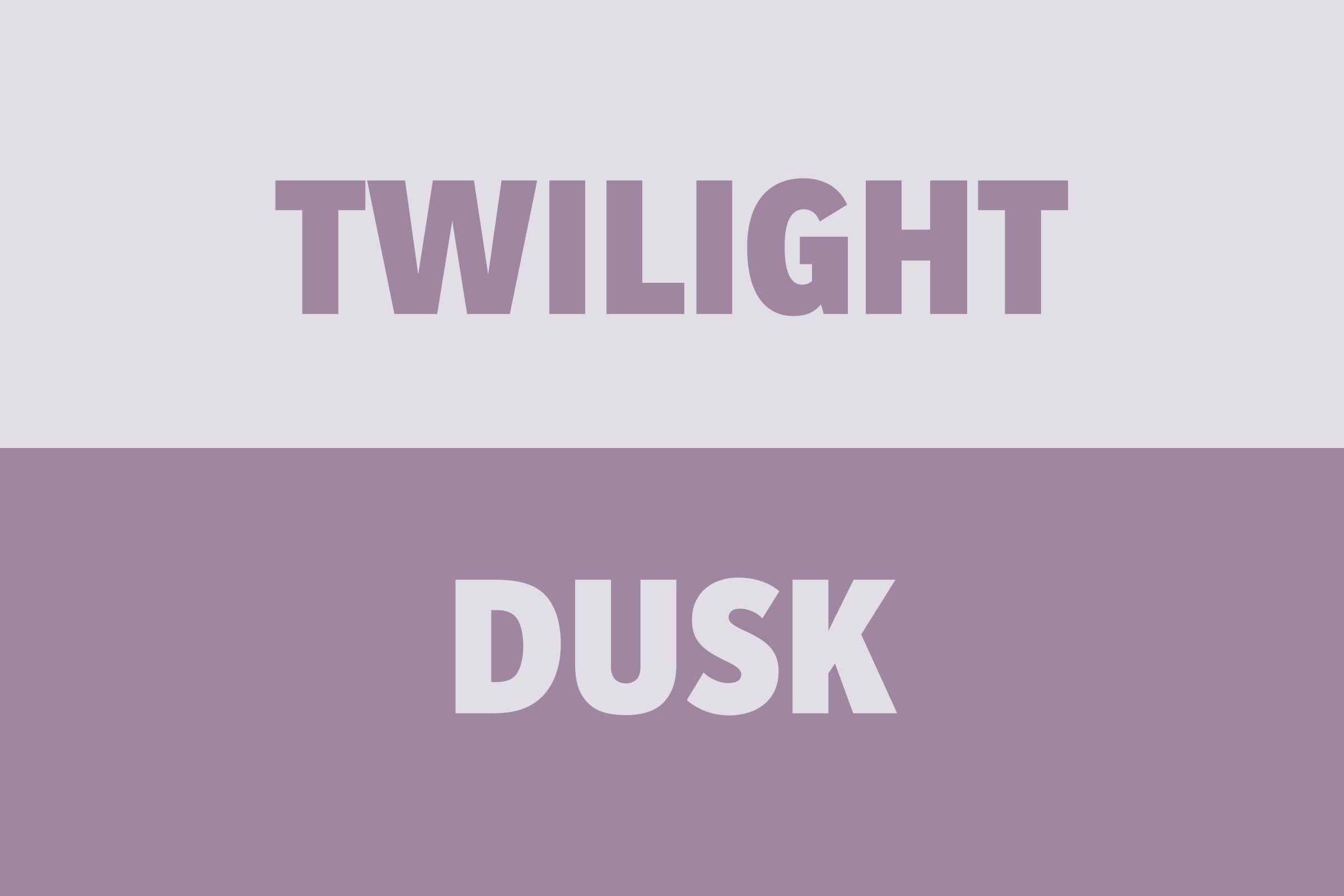 Twilight and dusk: What’s the difference?

Dusk happens once a day, after sunset. It’s the darkest stage of twilight, which occurs when the sun is below the horizon but still showers the landscape in indirect light. Twilight happens twice every day—before sunrise and then again after sunset (but vampires only sparkle during twilight). 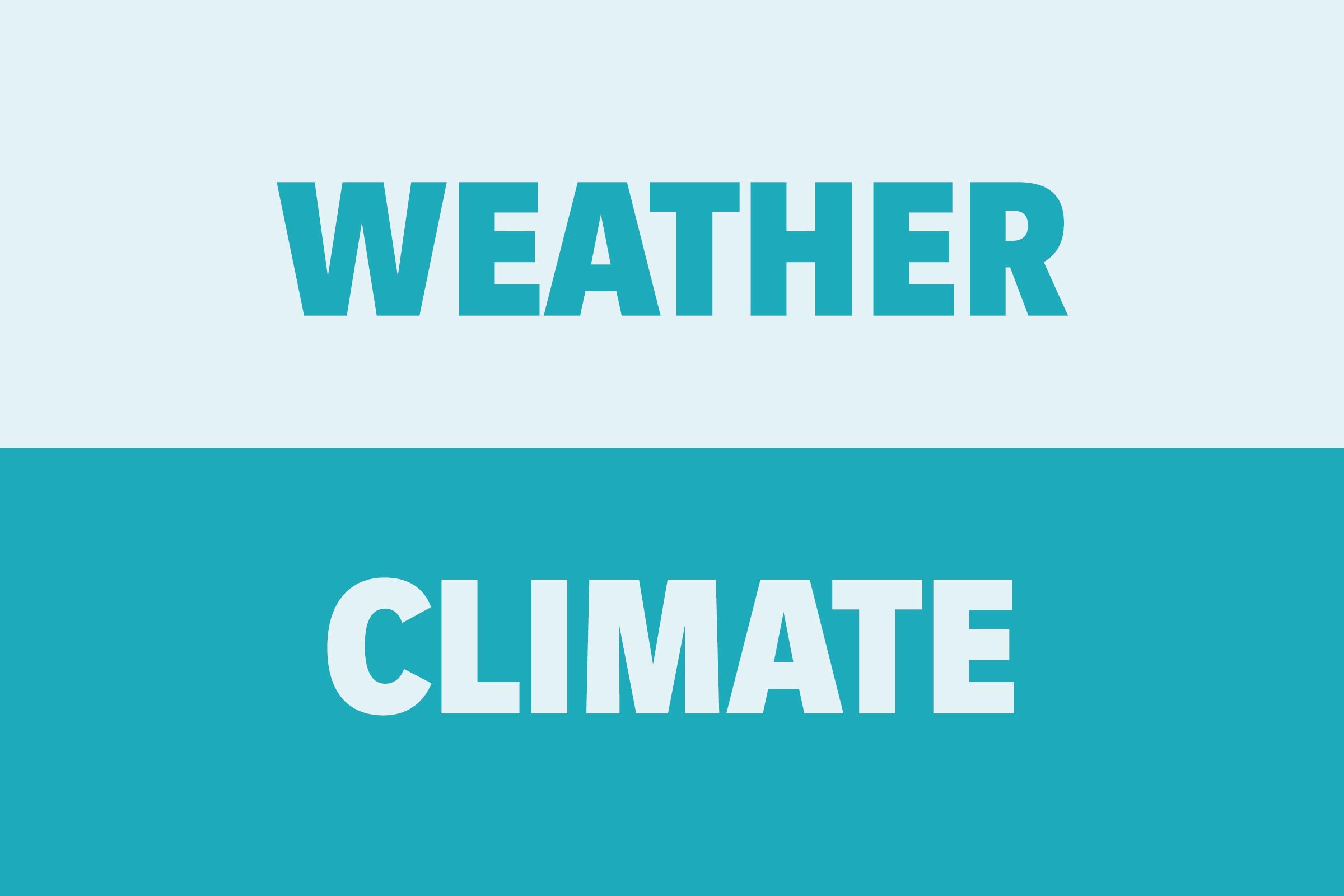 Weather and climate: What’s the difference?

The weather—a combination of atmospheric events that determine temperature, precipitation, and humidity—can be tracked daily. Weather is specific from region to region. Climate, on the other hand, is a much more wide-ranging system that is tracked over long periods of time. In other words, the climate is a long-term trend, and the weather is the variation around this trend. These extraordinary weather events were caught on camera. 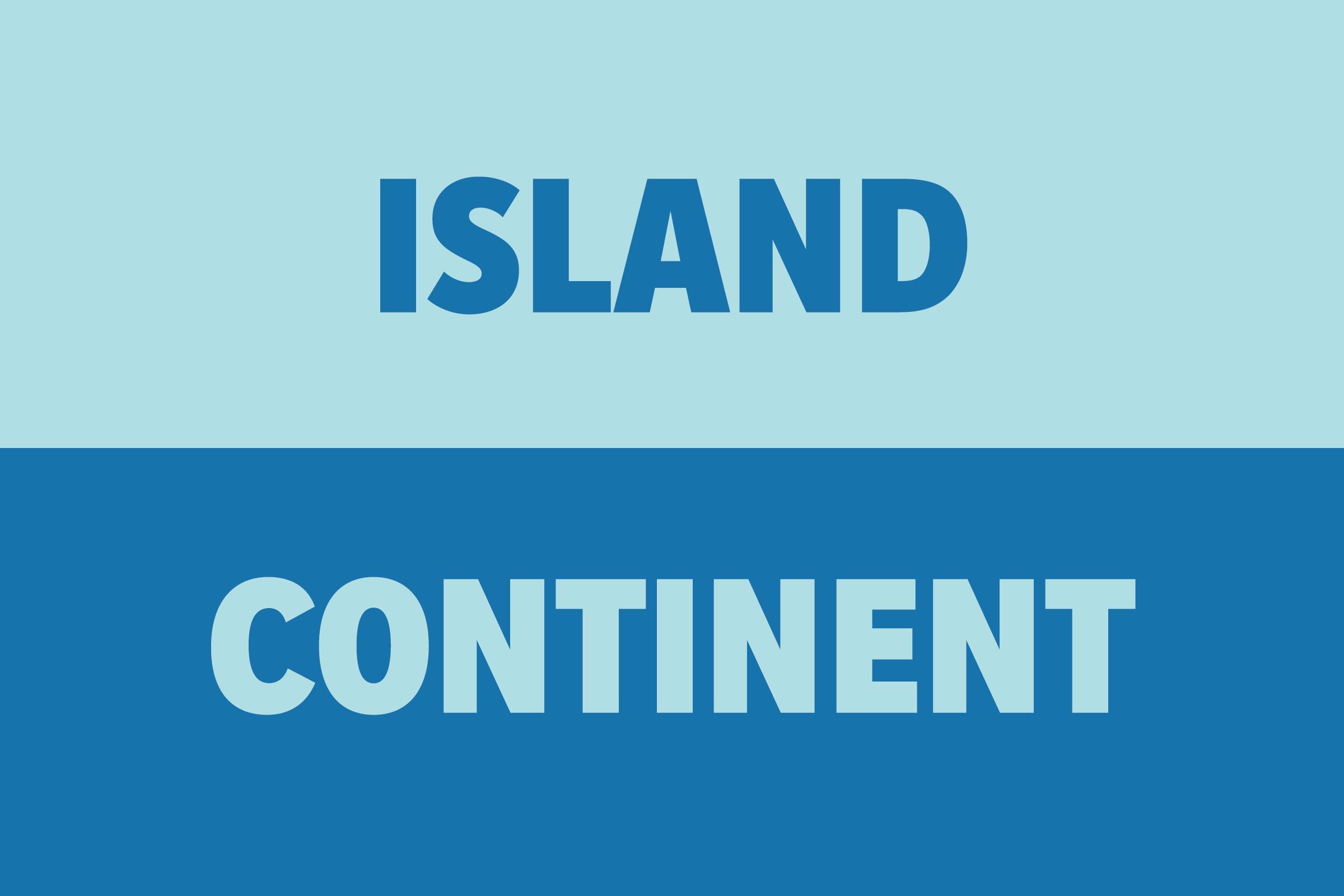 Island and continent: What’s the difference?

A continent is big, and an island is small, right? Well, yes, but there’s an even bigger difference. A continent is a landmass composed of low-density rock that “floats” on top of the earth’s mantle—it is bordered by tectonic plates and has mountain ranges and a plethora of cultures. Oceanic islands are landmasses composed of heavier rock that has risen partially above sea level. That’s why Greenland is the world’s largest island, not Australia, which is technically a continent. 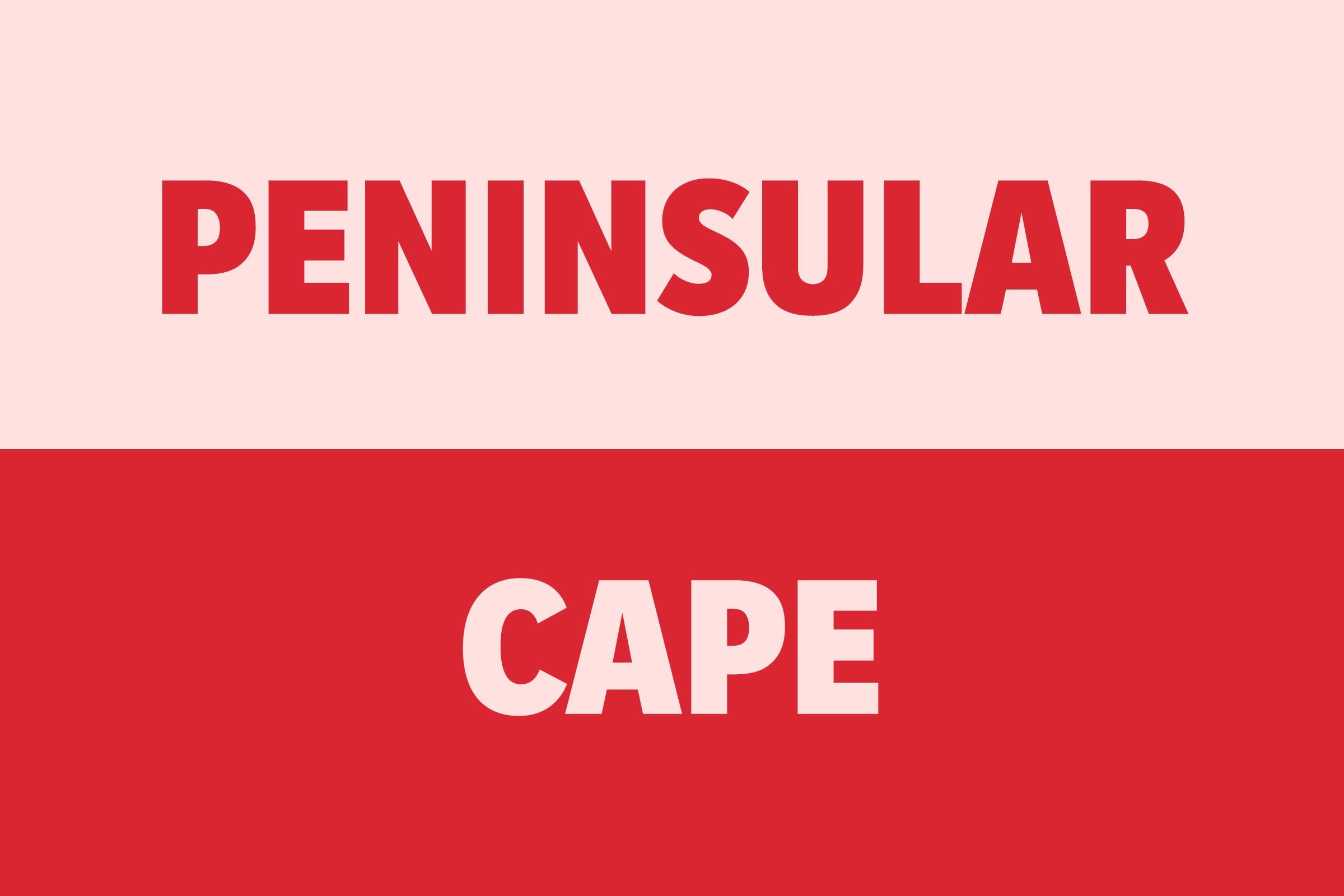 Peninsular and cape: What’s the difference? 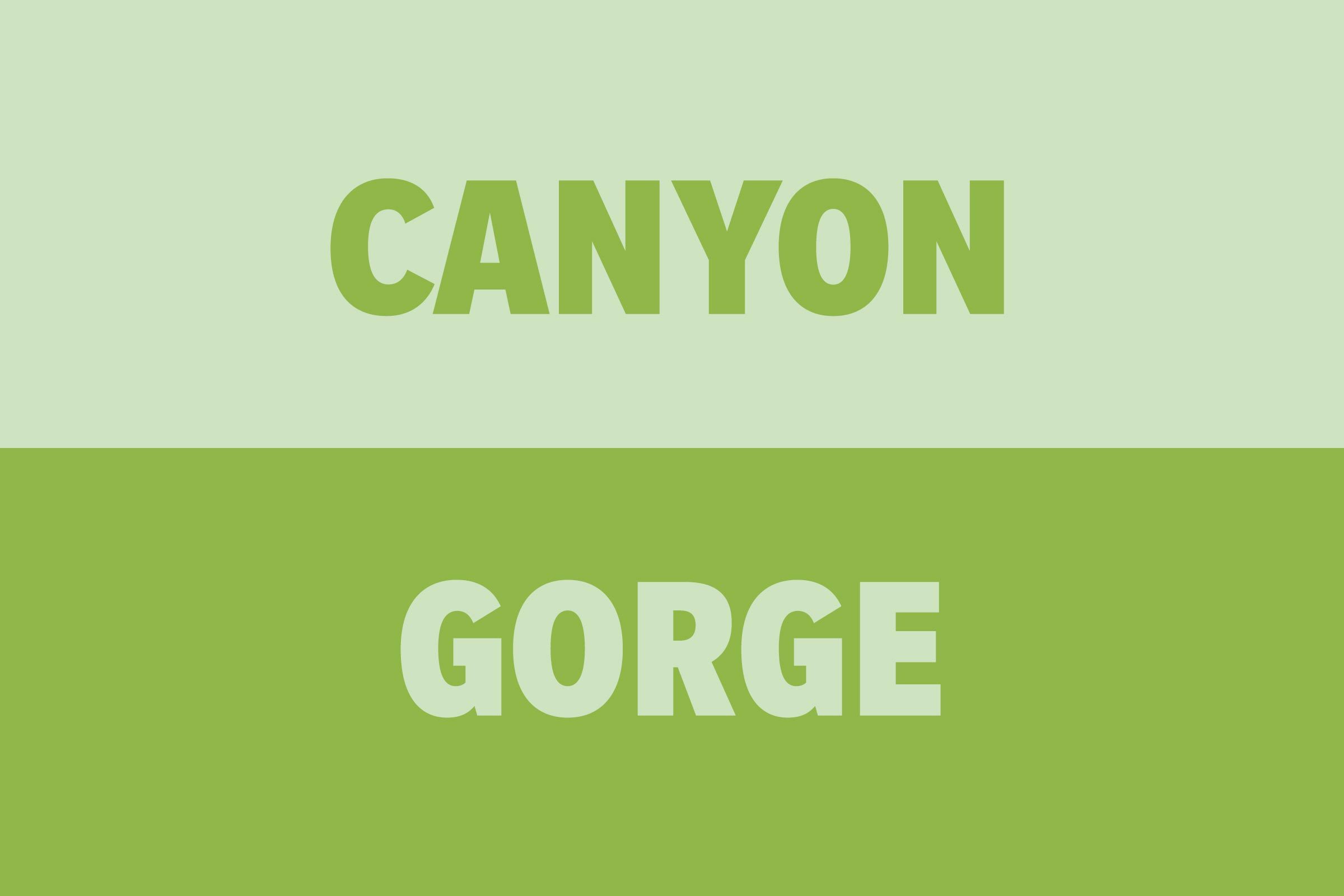 Canyon and gorge: What’s the difference?

Both are deep ravines with a stream or a river cutting through the bottom—but canyons have wider, sloping walls, whereas gorges are much narrower and steeper. But don’t go by the geographic names of these features. For example, the Columbia River Gorge in Oregon and Washington is actually a canyon. 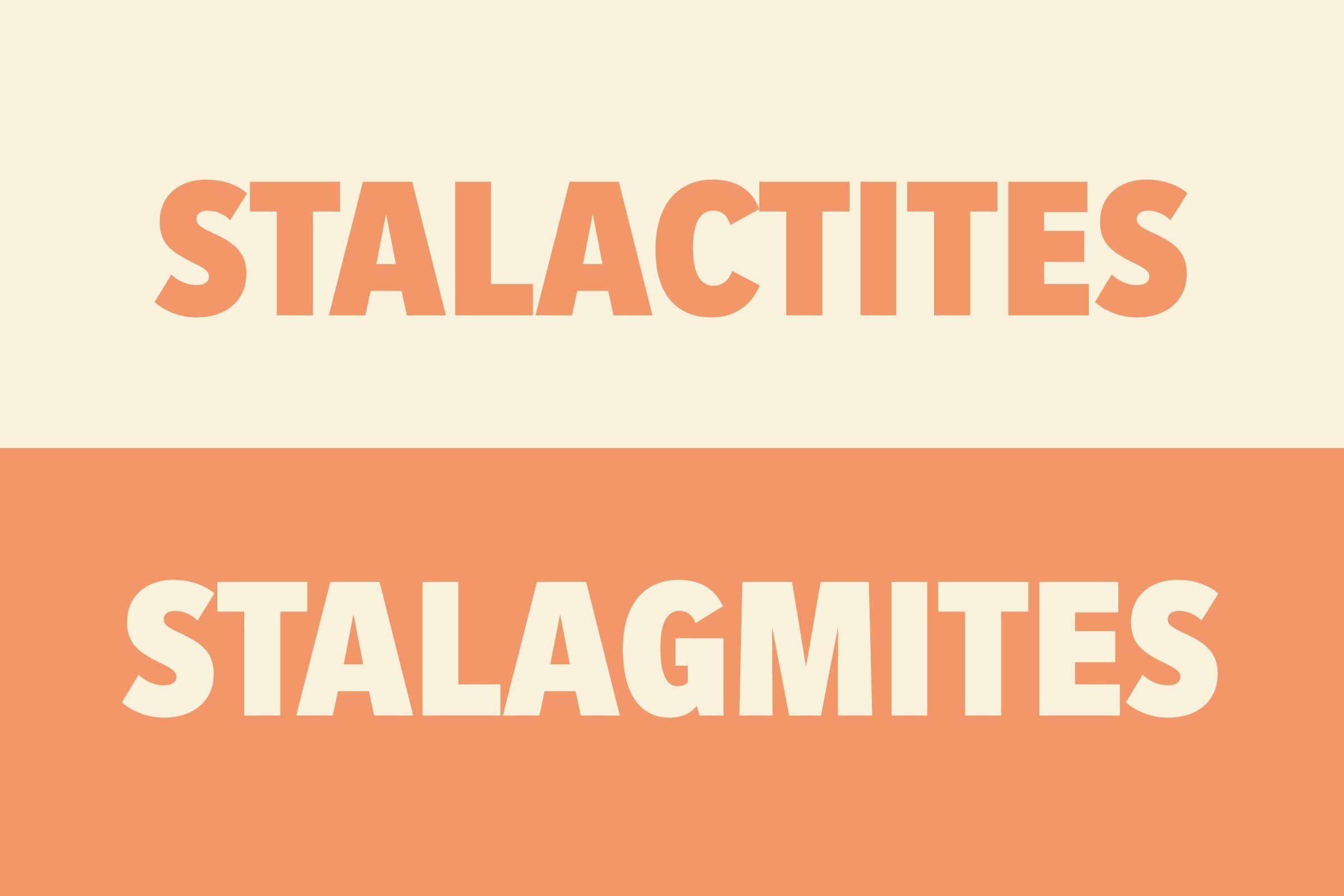 Stalactites and stalagmites: What’s the difference?

Formed by water and minerals, a stalactite hangs “tight” from a cave ceiling. It has a c for the ceiling; a stalagmite has a g for “ground.” Read through the most beautiful quotes about nature. 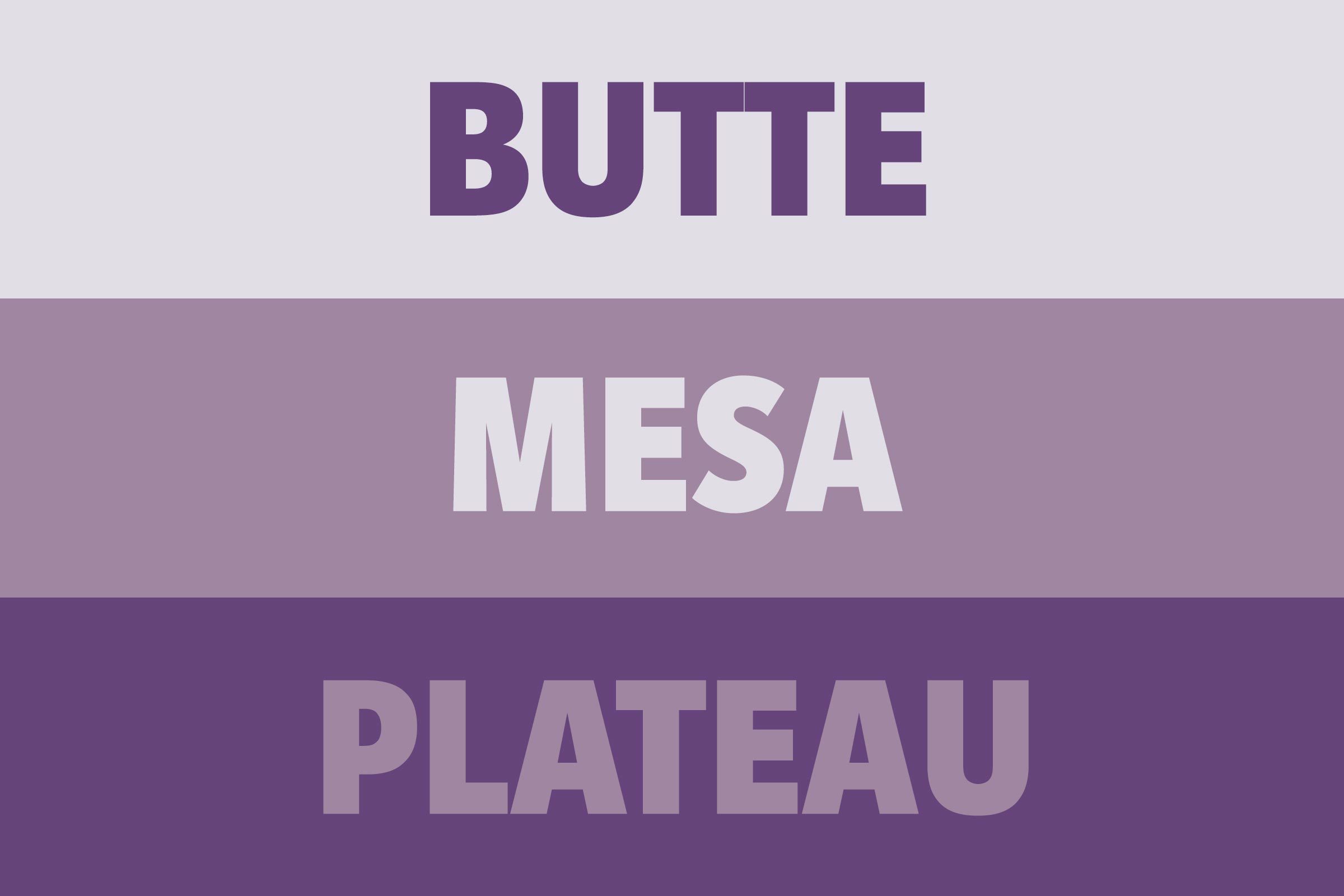 Butte and mesa and plateau: What’s the difference?

A plateau is the largest of the three; it’s a flat-topped hill or mountain. A mesa is medium-sized. When it erodes away into a smaller formation, it becomes a butte. 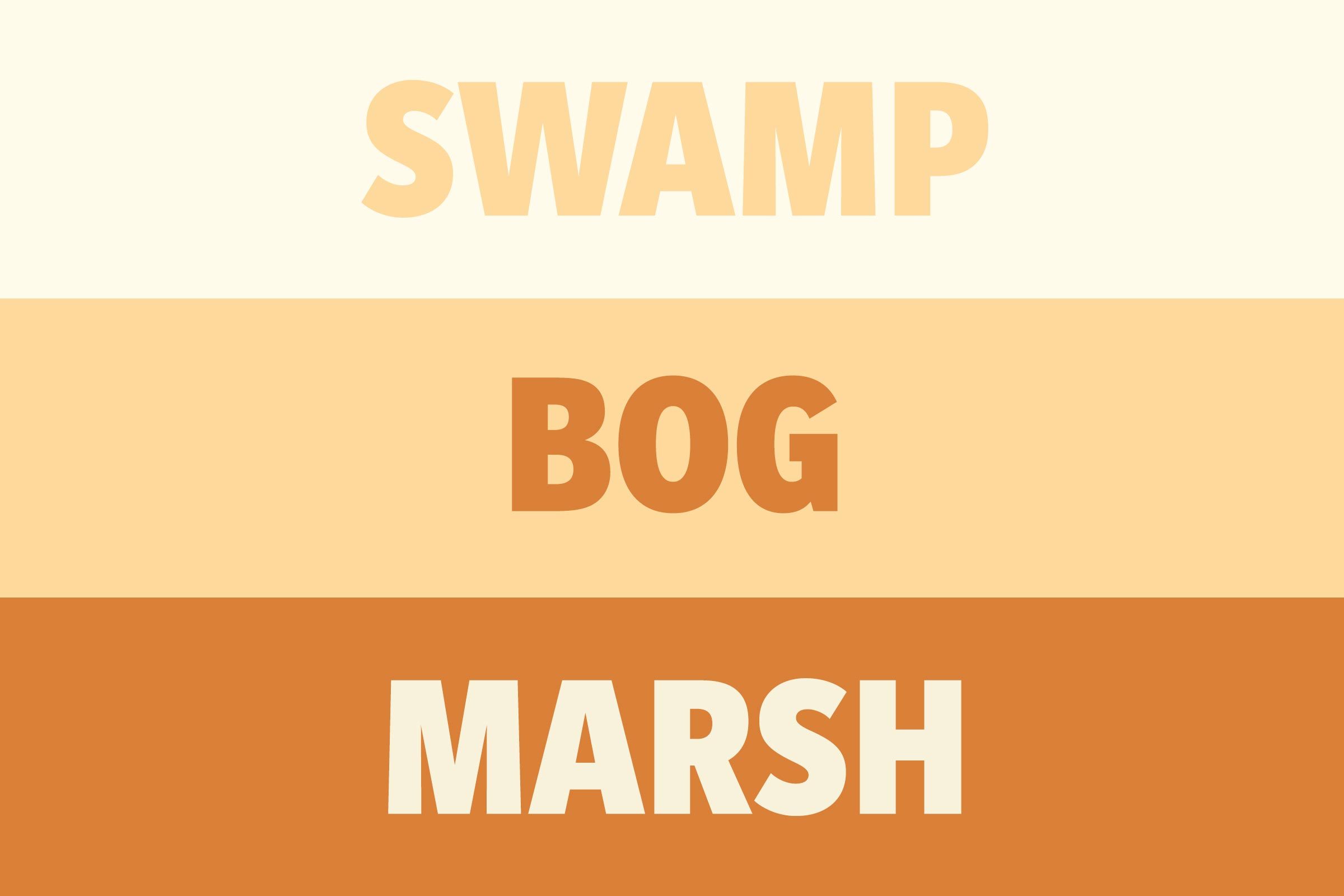 Swamp and bog and marsh: What’s the difference?

All three are types of wetlands. But a bog is on high ground, so water drains away from it and is replenished by rainfall. Bogs are covered in peat moss, which makes it difficult for aquatic animals to breathe or survive there. Swamps are low, flat areas where slow-moving water from rivers collects; they’re usually muddy and are home to trees and fish. A marsh borders a lake, ocean, or other large body of water; it’s got grasses and reeds (but not trees or peat) and lots of underwater life and birds. Learn about these times that crazy weather changed history. 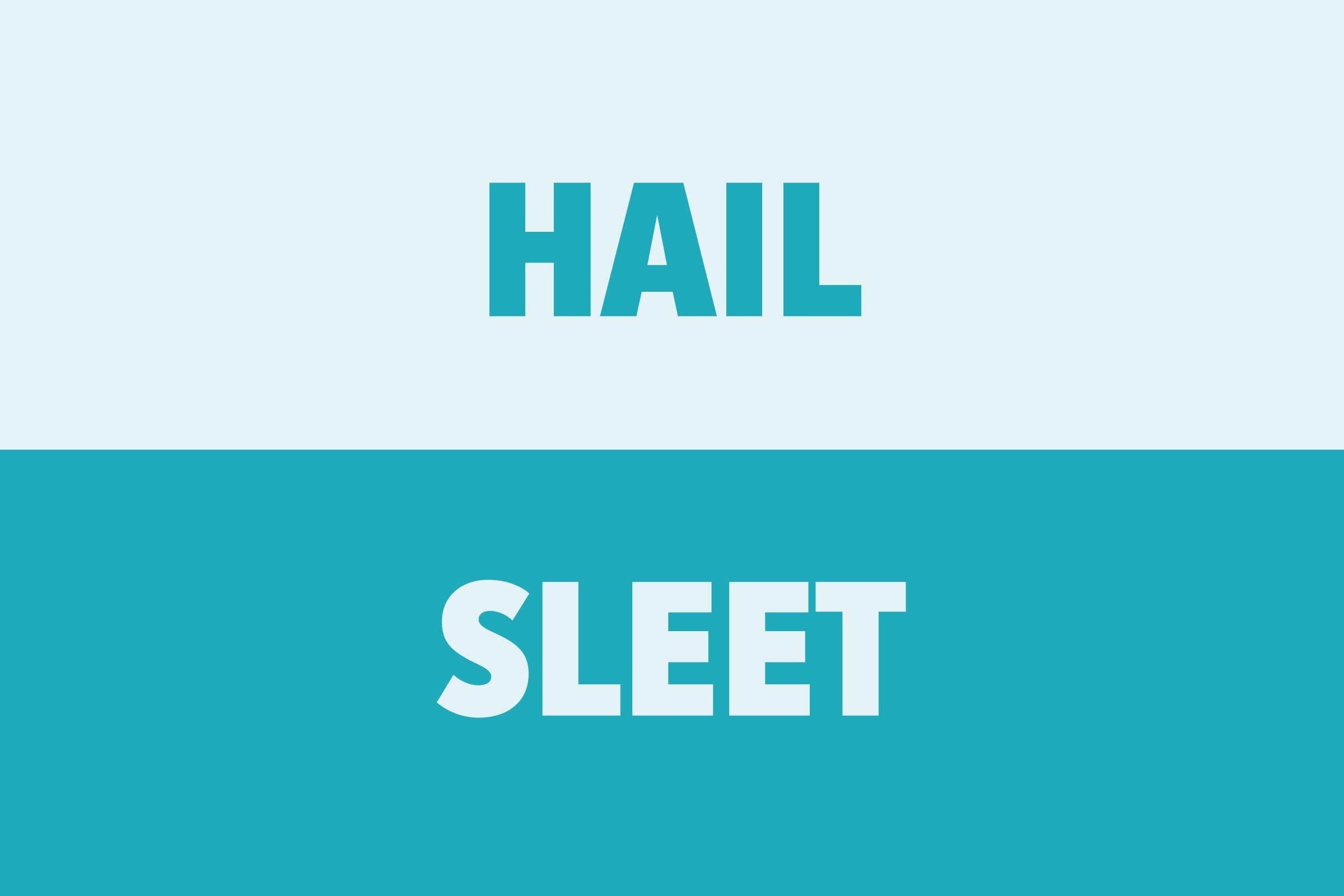 Hail and sleet: What’s the difference?

Both are irregularly shaped ice chunks that fall from clouds, but hail most commonly occurs in the warmer months. Why is hail larger? Because it forms in large thunderheads—the winds push the lump of ice high into the atmosphere, sometimes several times, making it grow larger and larger until it’s heavy enough to fall. Sleet isn’t associated with these massive updrafts, so it doesn’t take as much ice forming around a water droplet before gravity kicks in and makes it ruin your morning commute. 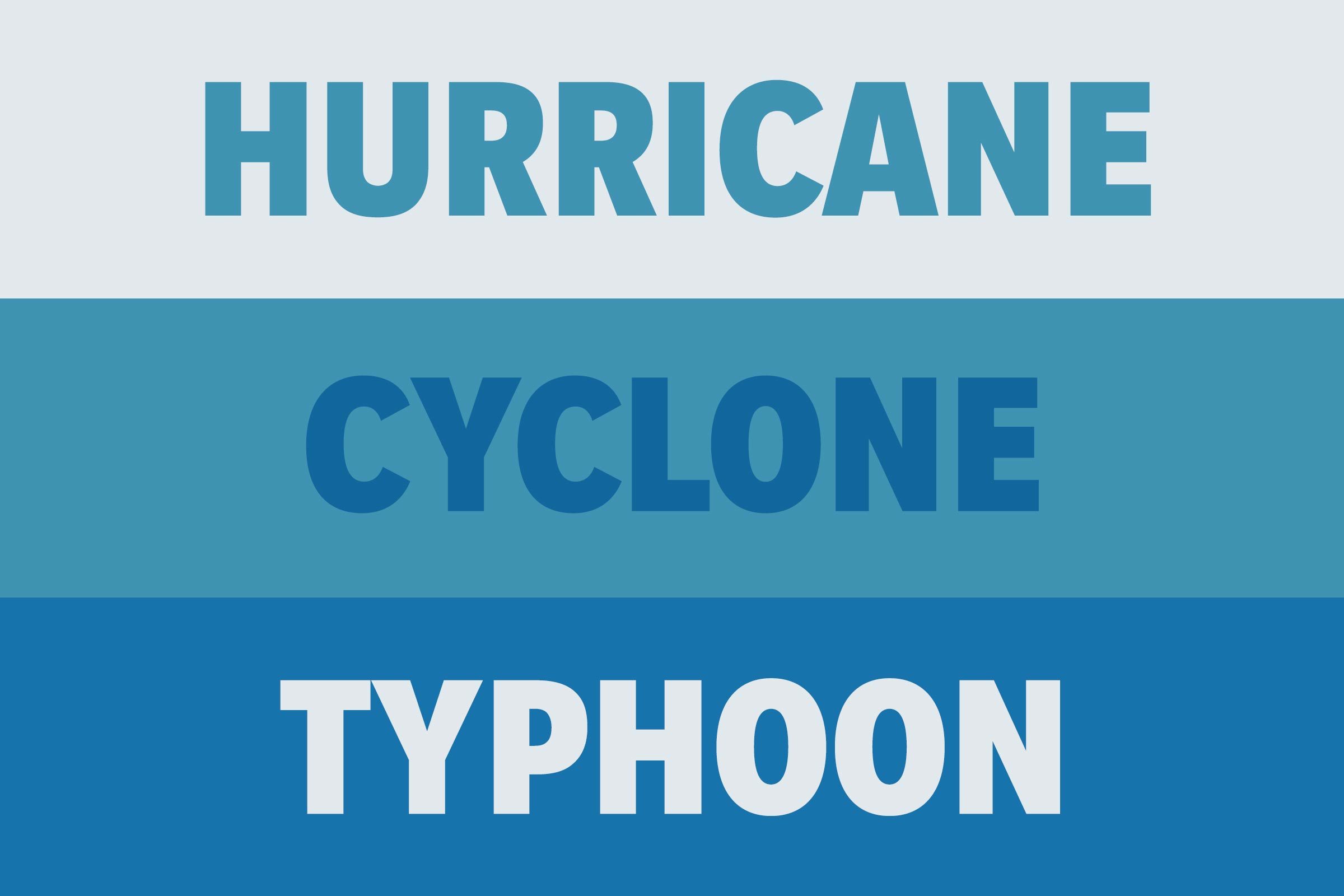 Hurricane and cyclone and typhoon: What’s the difference?

All three describe the same kind of oceanic storm with sustained winds reaching higher than 74 mph—the difference is in its location. If it strikes North America from the Atlantic Ocean, it’s a hurricane (named for Hurikan, the Mayan god of evil). If it strikes China or Japan, it’s called a typhoon (from Greek tuphõn, “whirlwind”); to Filipinos and other Southeast Asian, they are called baguios. And in the Indian Ocean, it’s called a cyclone—coined in 1848 by English scientist Captain H. Piddington, who derived the name from the Greek kyklon, “to move in a circle.” Today, any storm that has a circular motion—but isn’t strong enough to be a hurricane or typhoon—is referred to as a cyclone. These abandoned places have been overrun by nature. 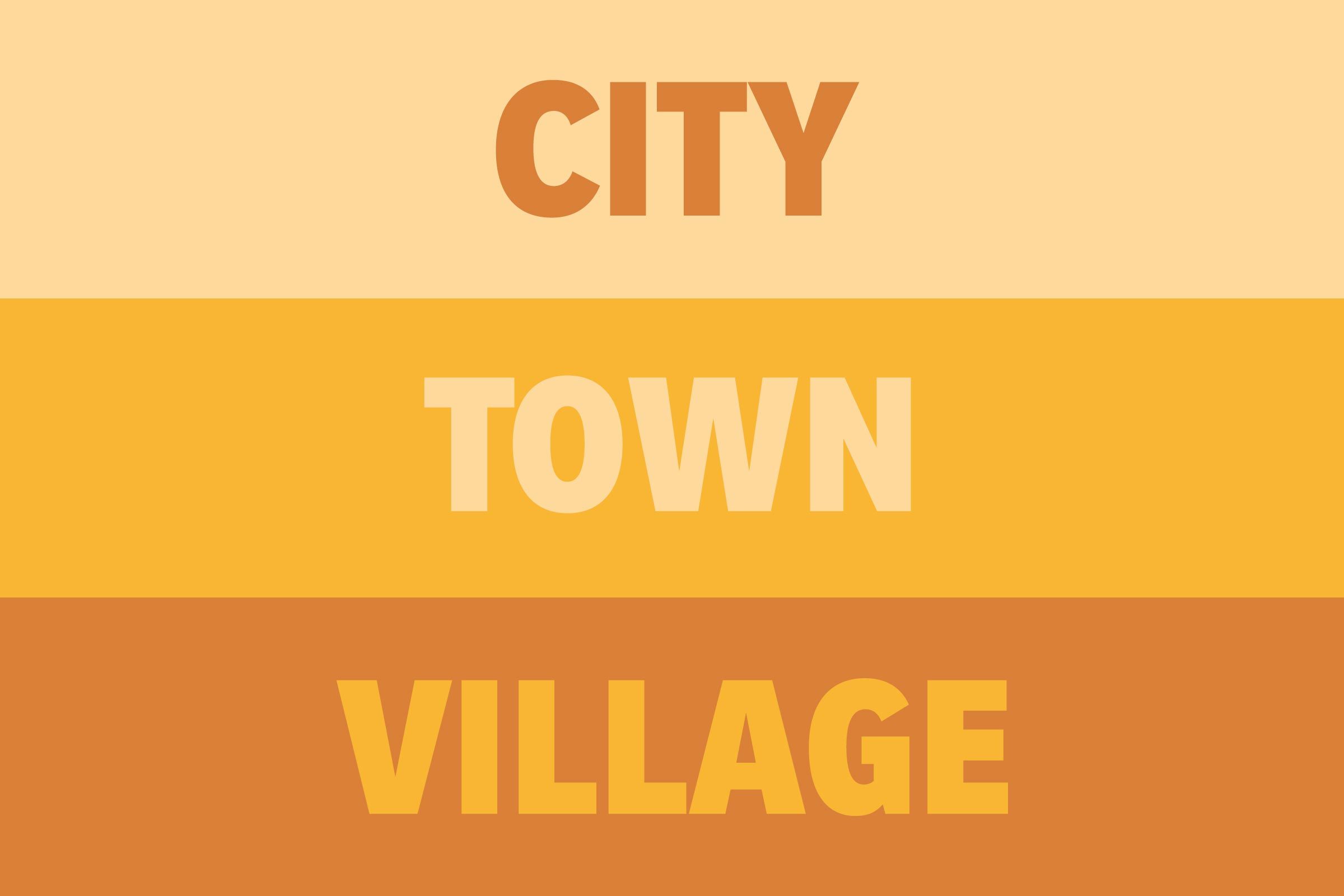 City and town and village: What’s the difference?

A city is an incorporated human settlement, which means it’s governed by a single entity (a mayor and city council) that is enclosed in a larger entity (county, state, country). A town is smaller than a city, but like a city it can also have a mayor. But unlike a city, a town’s municipal services (utilities, transportation) are handled by the county. A village has no central governing body and can be part of a town or city. Looking for more amazing facts and good laughs, purchase a copy of Uncle John’s Bathroom Reader® titles at bathroomreader.com. Now, make sure you know how to use these commonly misused words.