12 Photos That Show the “New Normal” of Disney Parks

For better or worse, all four Disney World parks are now open again after an unprecedented shutdown of nearly four months. Here's a glimpse at what things are like as the park contends with a pandemic that shows no signs of letting up. 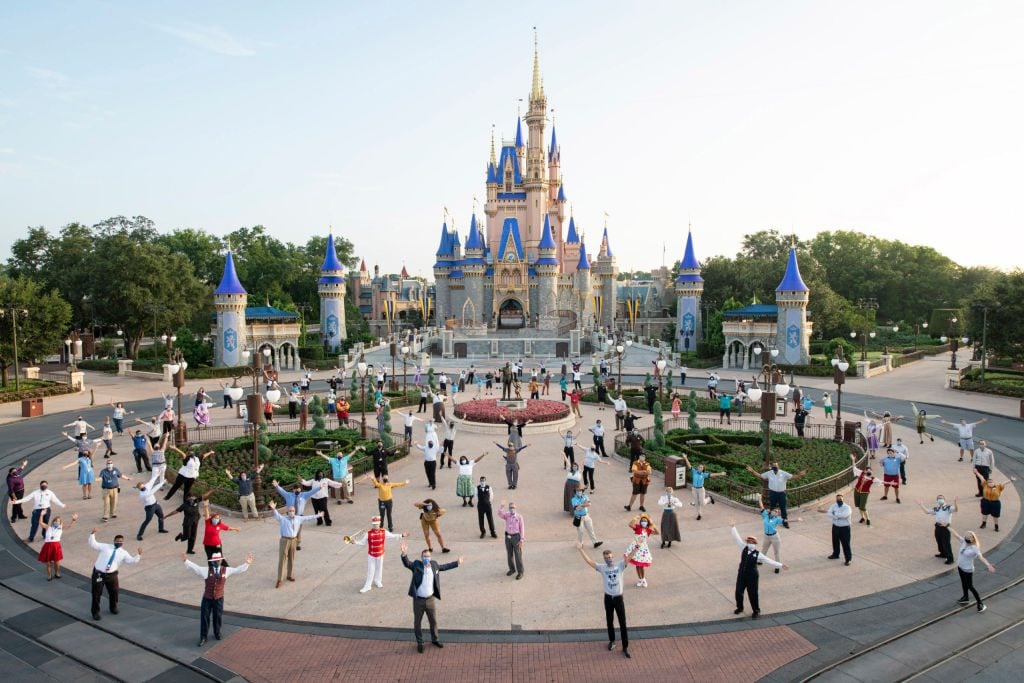 Slowly but surely, America’s Disney parks are reopening. Walt Disney World began allowing guests back to Magic Kingdom and Animal Kingdom on July 11, and to Hollywood Studios and Epcot on July 15. Public pressure—and a surge of coronavirus cases in California—galvanized Disney to postpone the reopening of Anaheim’s Disneyland from July 17 to an undecided future date. And yet, despite an even worse spike in Florida, Orlando’s Walt Disney World moved ahead with its reopening as planned. (Disney World is a significantly larger park than Disneyland; many people feared that Disneyland’s small size would make truly safe distancing unrealistic.)

To prevent a disastrous spread of COVID-19 cases in this volatile environment, Disney has put many strict protocols in place for guest entry, distancing, and cleaning. These photos from the reopened parks and shopping districts show what Disney vacations will be like for the foreseeable future. 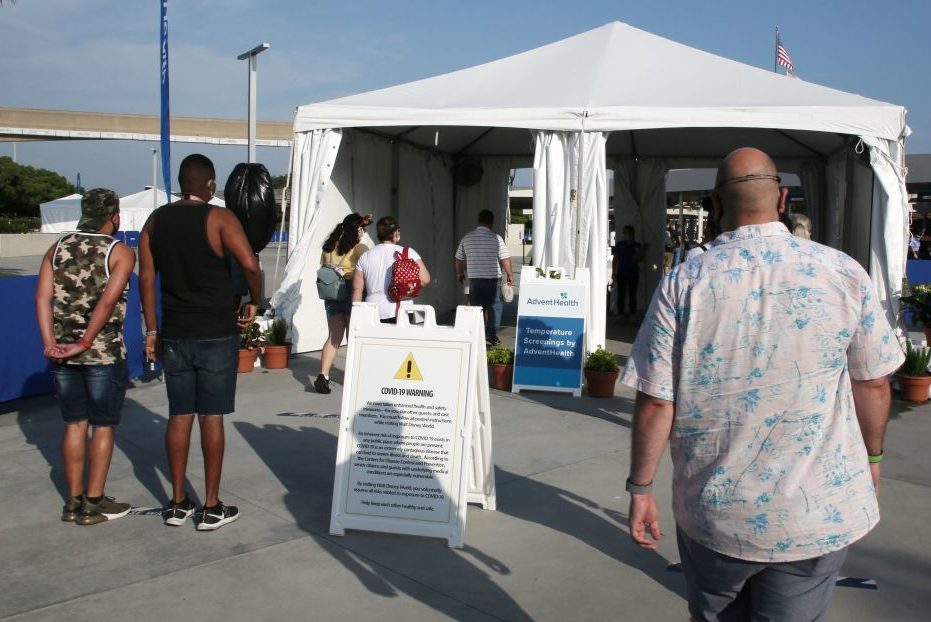 Standing on the same type of floor markers you can now see everywhere from restaurants to airports, guests maintain a safe distance while waiting to enter Disney World’s Magic Kingdom on its first day back open, July 11. A pair of signs remind them that even at the Most Magical Place on Earth, the risk of catching the virus is still real and things are certainly not back to the way they were. Find out the places you’re most likely to catch coronavirus. 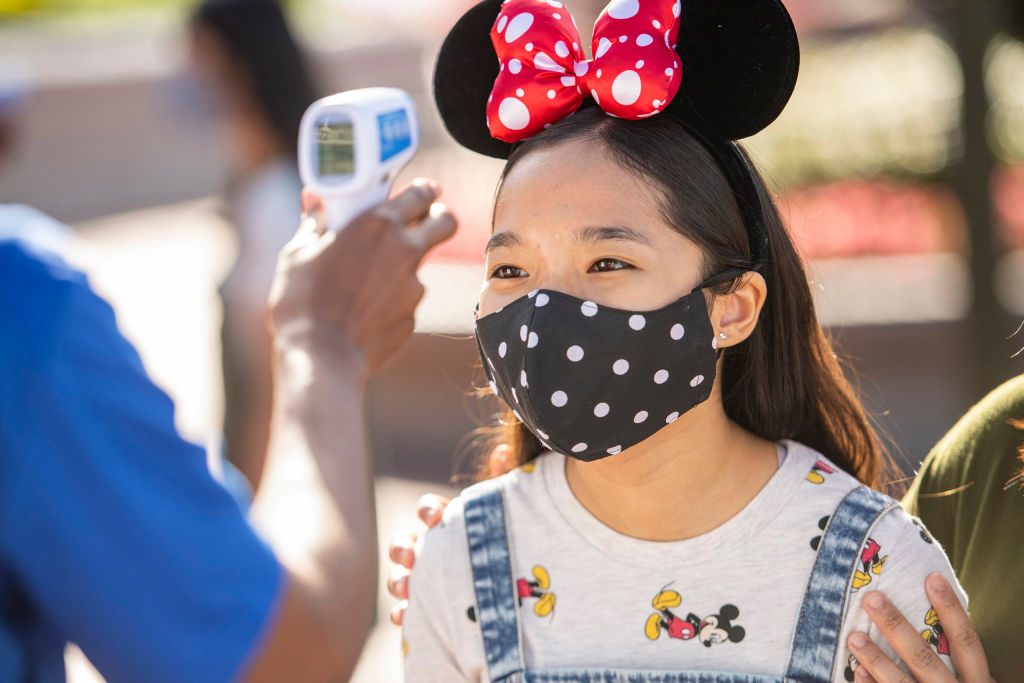 This Mickey and Minnie superfan has her temperature checked before she’s allowed to enter the Magic Kingdom. Any guest with a temperature higher than 100.4 degrees Fahrenheit will be denied entry to the park—along with anyone in their party. 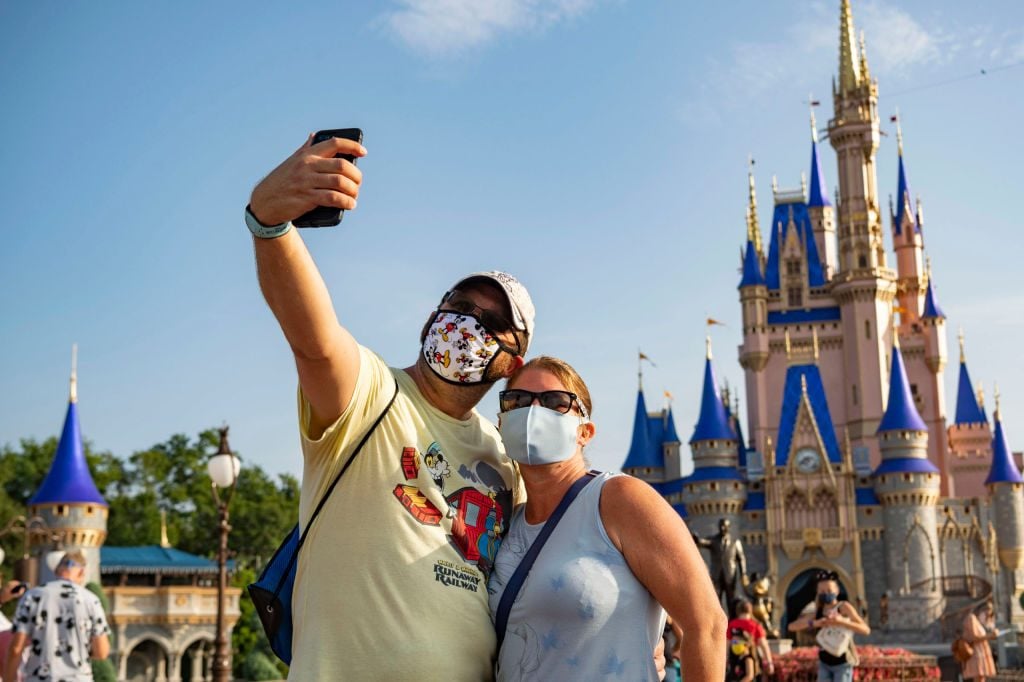 The quintessential Disney World shot—a selfie in front of Cinderella’s Castle—looks a little different now. But we’ve got to admire this guest’s Disney spirit. With masks mandatory for all park guests ages two and older, face masks are now as much a part of showing your Disney spirit as Mickey ears. Here are some more rules to know about if you’re planning on heading back to Disney now. 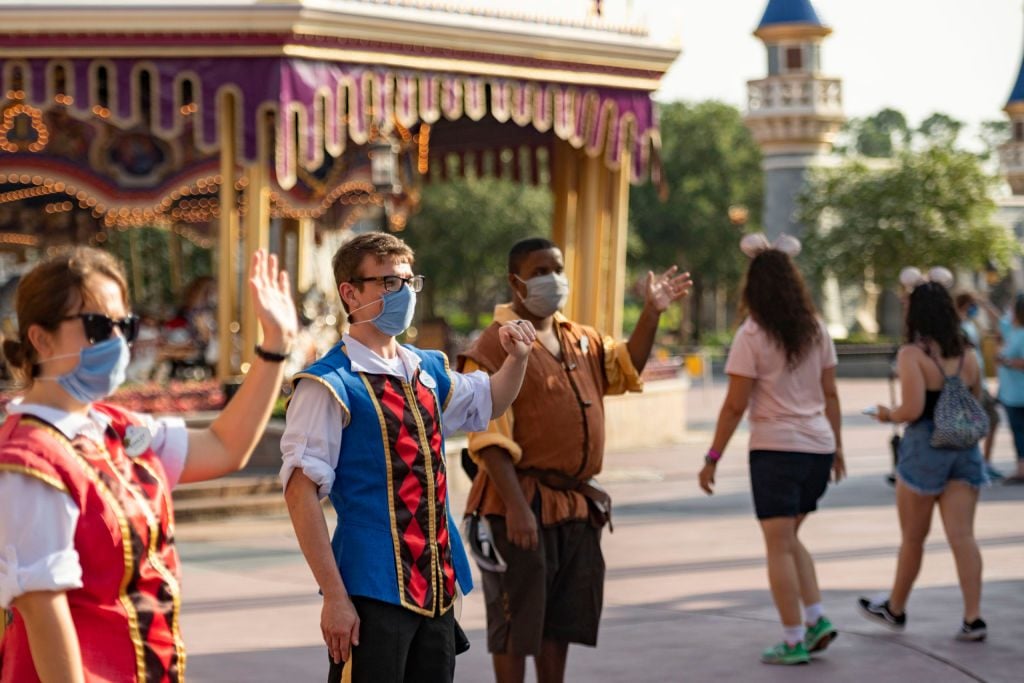 Masks are part of the uniform

It’s not just guests who have to comply with mask rules—all Cast Members (what Disney calls their park employees) have to wear face coverings at all times, too. We wonder how this will affect their ability to stay in character—another essential rule all Disney employees must follow. 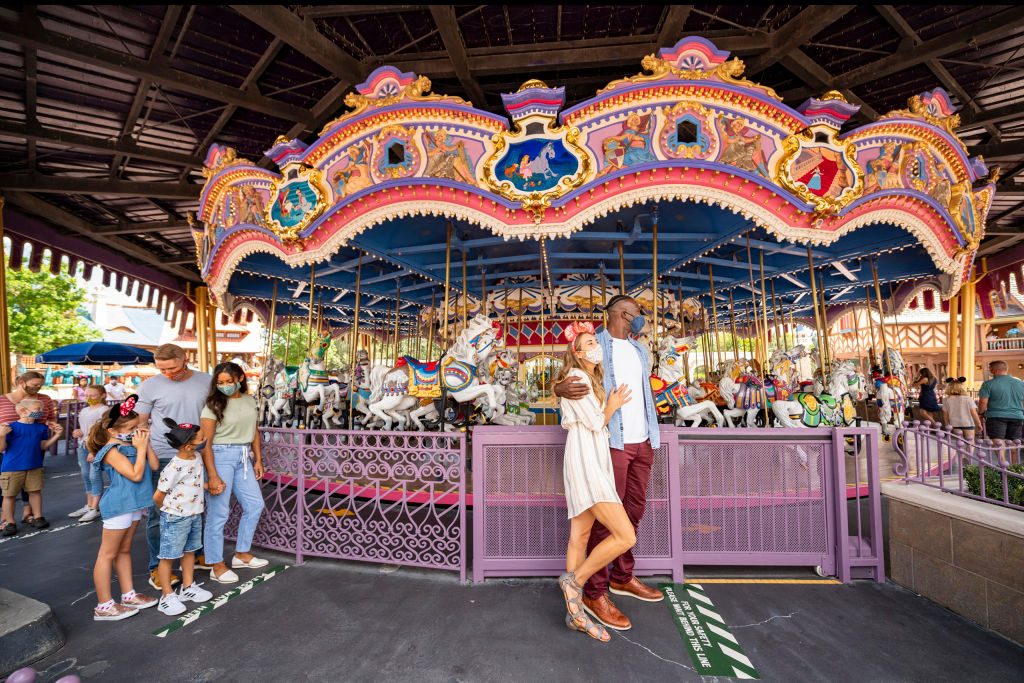 In this promotional image from before the parks opened, Disney hoped to give would-be guests a glimpse at what a socially-distanced Magic Kingdom would look like. This shot of guests waiting in line to board the Prince Charming Regal Carousel shows a far less crowded park than we’re used to where guests’ happy expressions are partly obscured by face masks—but they seem to still be having a good time. Find out how the list of things that are banned from Disney parks has changed due to the pandemic. 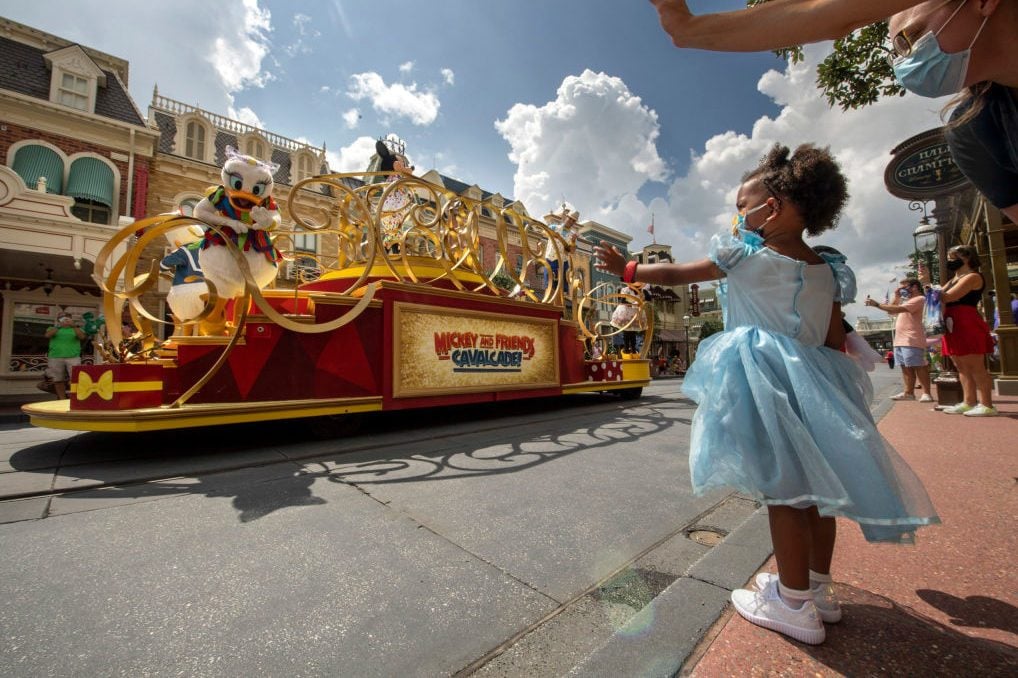 This little princess gets a personal wave from Daisy Duck during the “Mickey and Friends Cavalcade,” a musical Magic Kingdom parade. Disney World issued a statement that “experiences (such as shows, parades, and fireworks)…may have limited availability or may remain closed” to prevent crowds from gathering. But clearly this particular parade is still going—and, if this photo is any indication, on Day 1 crowds certainly weren’t a problem! Get a look at more things you won’t see in Disney parks anymore. 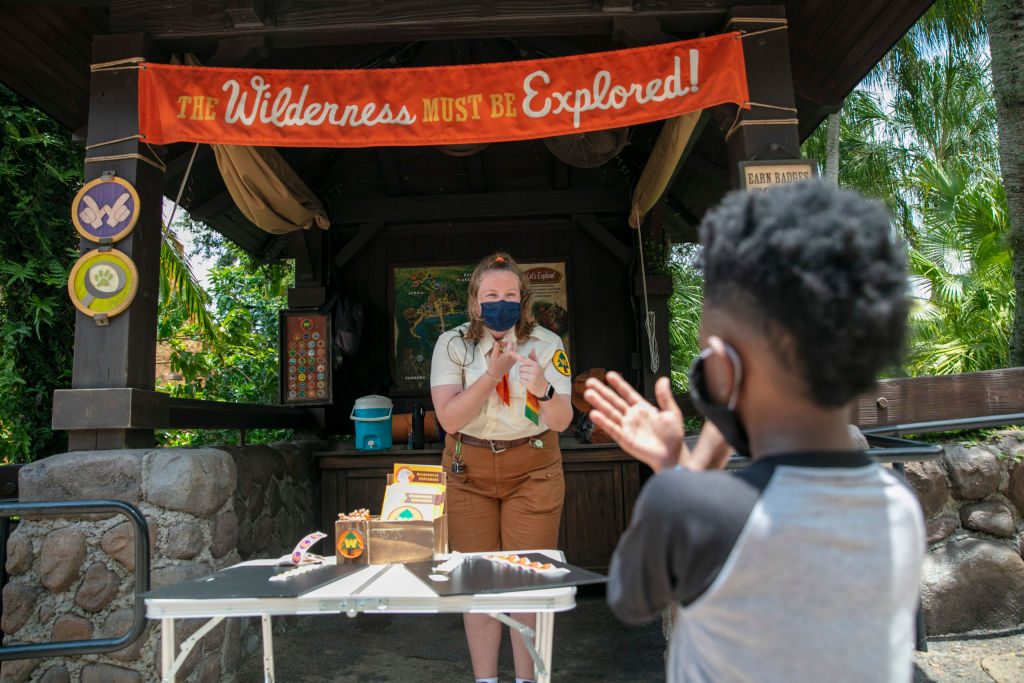 A Disney Cast Member interacts with a young wilderness enthusiast—from a safe distance—on Animal Kingdom’s reopening day, July 11. Find out some more things that will change at Disney World because of COVID-19. 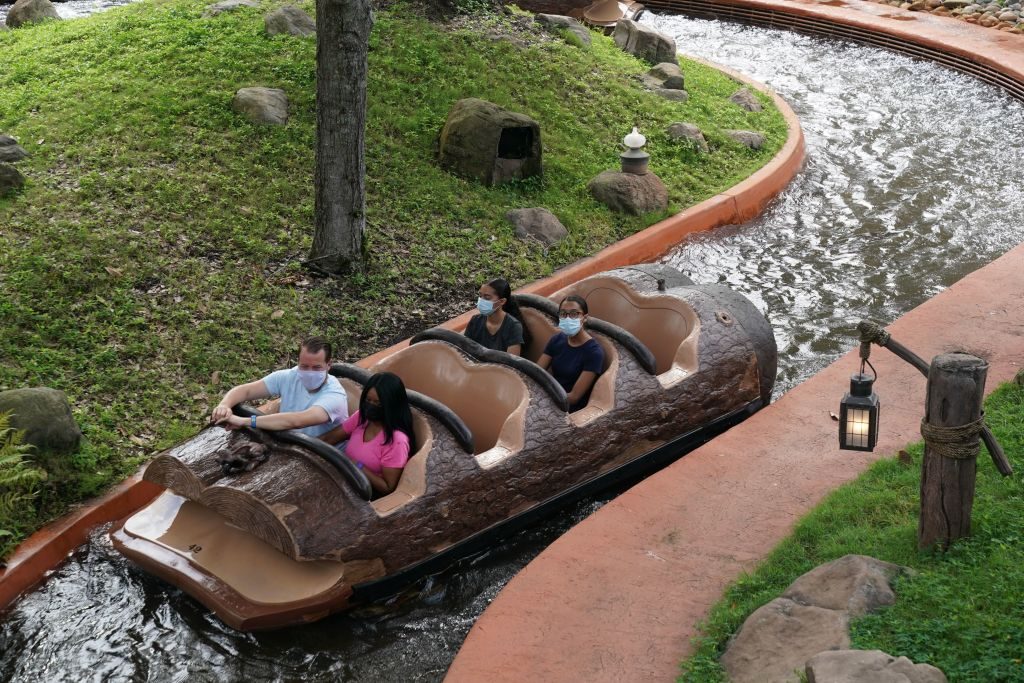 Now, this photo is a real snapshot of a pivotal, unique moment in history. Of course, the flume at the bottom of Disney World’s Splash Mountain is half empty, with guests sitting in every other row to allow for distance between parties. And, of course, those guests are wearing masks. But in addition, the ride itself, Splash Mountain, is entering the final stretch of its existence as it is now. Disney announced in June that both the Disney World and Disneyland versions of the ride would be re-themed from the antiquated, racially insensitive film Song of the South to the film The Princess and the Frog, starring the first Black Disney princess. Here’s why this makeover is long overdue. 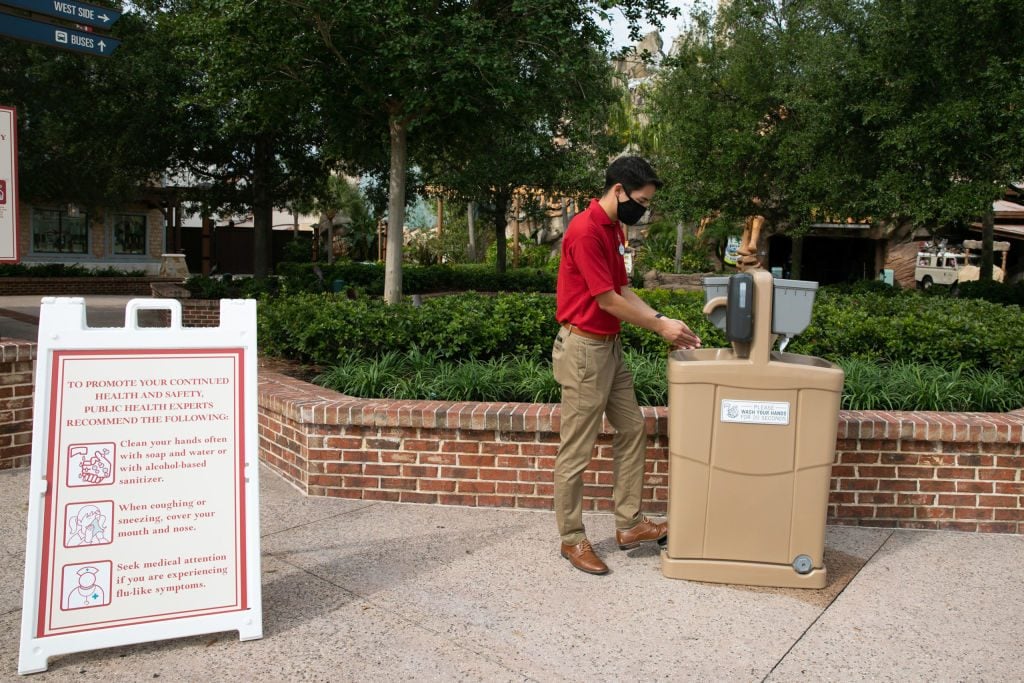 Good, thorough hand-washing is just as important as ever. To make sure that Disney guests don’t forget about this crucial step while they’re wrapped up in their vacation fun, Disney has installed hand-washing stations throughout the parks. This Cast Member keeps his hands clean at a hand-washing station in Disney Springs, Disney World’s shopping district. Find out the things that have been happening in Disney World even while it’s been closed.

Even though Disneyland itself won’t be open for a while, its adjacent shopping district, Downtown Disney, reopened on July 9. COVID-19 nerves couldn’t keep hundreds of people from visiting on that first day. Here, two days later, masked guests meander around the restaurants and outdoor seating areas. 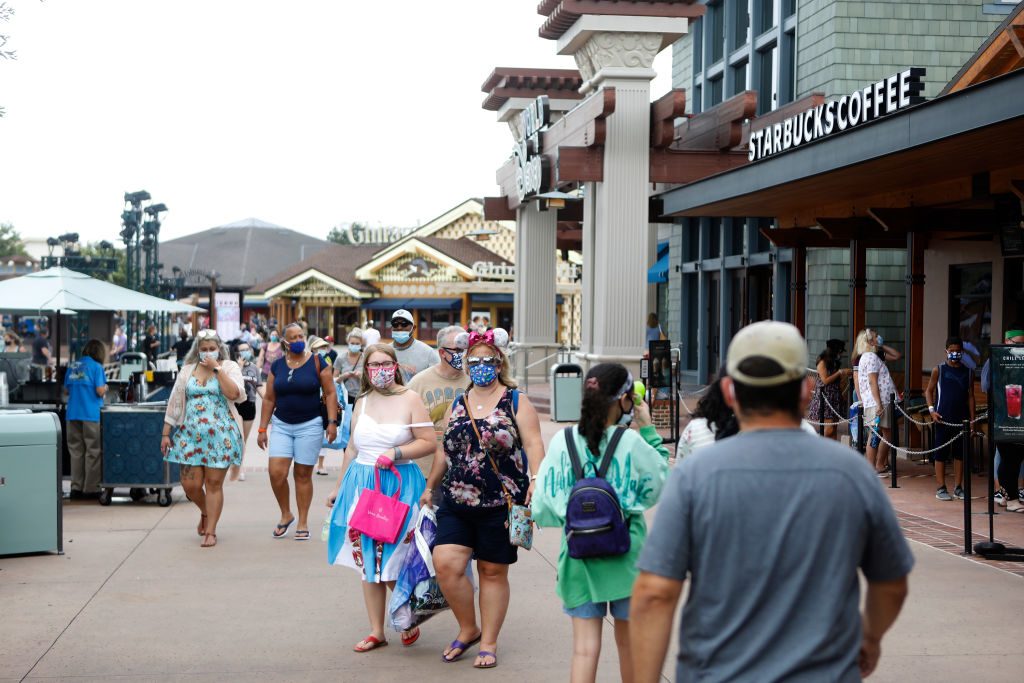 Disney Springs, the shopping district on Disney World property, opened long before the parks themselves, on May 20. Also with many restrictions in place, Disney Springs has been welcoming eager guests, like these shoppers who maintain some social distance outside a Starbucks on June 8. Next, find out the things you should know about staying at a Disney-owned resort right now.