Feats spanning the silly to the awe-inspiring were the new Guinness World Records to beat.

Chances are, a Guinness World Record has stuck with you since you first saw an image of it in childhood—maybe the longest fingernails, or the largest living cat. Since the first book of records hit shelves in 1965, the Guinness team has been deciding what makes the cut and what does not. These days, ten adjudicators in North America alone set and send out rules and guidelines, and attend attempts in person “to make sure they’re done correctly and decide whether or not they’re successful,” Spencer Cammarano, senior records manager and adjudicator at Guinness World Records North America, tells Reader’s Digest. New records are being set all the time. “By the time we finish this call, ten records will probably be broken,” says Cammarano. Below, a look at some of her favorites from 2018 (which appeared in the 2019 edition) and 2019 (which are in the new 2020 edition). You’ll also want to know these 16 most outrageous world records ever broken.

A joint effort by Ripley’s Believe It or Not! Times Square and Madame Tussauds New York on the occasion of NYC hosting WorldPride, the winning boa was 1,919.50 meters (6,297′, 6″ feet). A portion of the proceeds from attendance were donated to The Trevor Project, a nonprofit focused on suicide prevention among the LGBTQ community. There were many other Pride festivities in the month of June worldwide.

Two at the Toronto Marathon

Twenty-two runners attempted to break records here on October 20, 2019. At least two of them did it.

Omar Trujillo Rosas was the fastest marathoner dressed as an Aztec (male), which he accomplished in 3 hours, 40 minutes, and 18 seconds; this record, meant to call attention to Mexican heritage, will appear in next year’s book.

And Jared Levine was the fastest marathoner dressed as a supervillain (male). He ran the race in 3 hours, 2 minutes, and 2 seconds. Says Cammarano, “He had attempted the record for fastest marathon dressed as a chef at the London marathon and fell short. He was determined to try again.” Find out the highest number anyone has ever counted to.

Most toothpicks in a beard

On the fun side of record-breaking—as opposed to grueling strength and journey-based attempts—the most toothpicks in a beard was achieved by Joel Strasser in Lacey, Washington on July 7, 2018. Strasser’s 3,500 toothpicks beat out the previous record of 3,157 in 2014. Toothpicks actually have many surprising uses, but we’re not sure what the purpose of putting a bunch in your beard is!

In a first-ever simultaneous attempt to break this record of pure stamina (although making edible food was also critical, according to Cammarano), Andrey Shek in New York and Raymond Mendez in Chicago achieved their joint goal on behalf of Benihana in 42 hours and 17 seconds. It was soon broken in April 2019, by Rickey Lumpkin II in California, who came in at 68 hours, 30 minutes, and 01 seconds. We’re not sure what they cooked, but it wasn’t the biggest burger in the world. 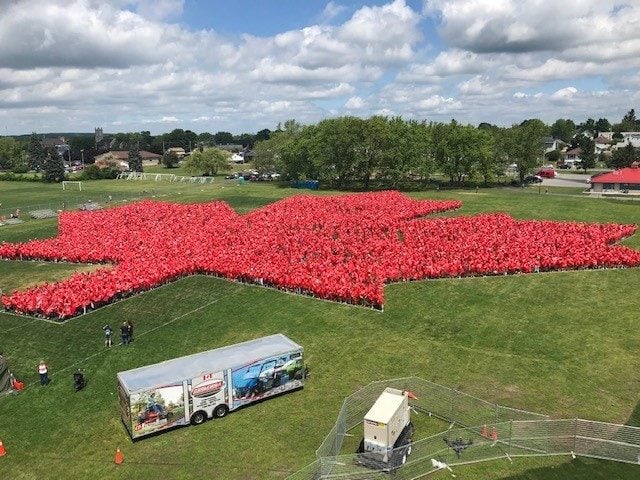 Unsurprisingly, this record was set in Canada, in June of 2019. The achievement of 3,942 people belonged to Operation Stand Proud presented by Leon’s Superstore Trenton in Quinte West, Ontario, on the occasion of Canada Day. “It’s one of the best parts of my job,” says Cammarano, who officiated. “I got to experience a place I might never have visited, and the mayor and people in the town were so glad we were there.” Find out 20 more things you never knew about Canada.

Built by the Sakakibara Kikai Company, and verified in Kitagunma, Gunma, Japan, in December of 2018, this tech-based entry, on the occasion of the latest Guinness Book of World Records theme, shows how much technology has become a huge part of our society, Cammarano says. Find out the 12 kookiest karaoke records no one ever knew existed.

These 20 things made with a 3D printer are also pretty amazing.

Most Victory Royales in Fortnite using a QuadStick mouth-operated joystick

Yup, another tech title. This one comes with a story. According to Guinness, “On 26 March 2019, PC gamer ‘RockyNoHands’ (aka Rocky Stoutenburgh, USA) had fought his way to 509 Victory Royales in Fortnite Battle Royale (Epic, 2017) using a QuadStick mouth-operated joystick. After injuring himself in a serious fall, Rocky was paralyzed from the neck down, but despite his quadriplegia, he was able to train himself over many years to play games using just his mouth.” Find out 13 of the coolest world records ever set by kids.

This record, achieved in Guizhou, China, on September 25, 2019, by the Guizhou Shiqian Hot Spring Investment and Development Company, measures an impressive 91.806 meters (301 feet, 2 inches). The skywalk, which is shaped like a boat’s bow, juts out over a breathtaking and tourist-favorite valley, which is sure to raise some screams. These are 12 other observation decks with terrifying views around the world.

Japanese swimmer Yuko Matsuzaki spent 24 hours, 1 minute in a counter-current swimming pool in Redondo Beach, CA on October 6, 2019, to achieve this new stamina-based record. Did her bright pink cap help spur her to victory? (We can only imagine.) World records aren’t limited to humans; these 11 amazing dogs have broken world records. 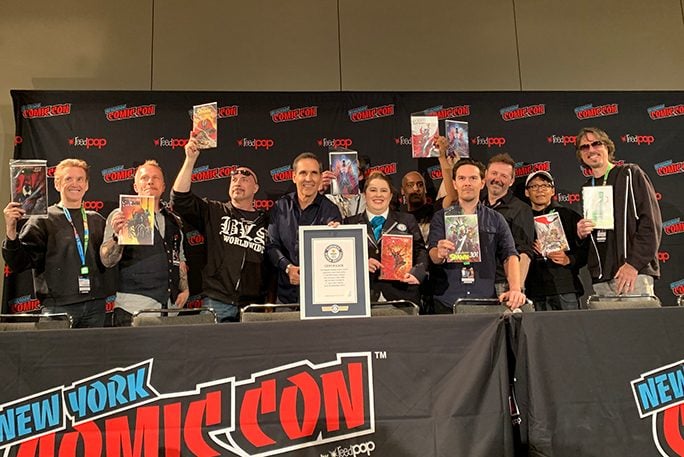 Comics fans are notoriously loyal to their favorite heroes and villains, and they’ve helped make Spawn, by Todd McFarlane, the longest-running creator-owned superhero comic book series. It’s been entertaining readers since May of 1992, meaning that as of September 30, 2019, it had been running for 27 years and 4 months. Check out these other amazing facts about superheroes.

You’d better be hungry for this one, which landed the victor, chef Hiroshi Kuroda, a spot on Good Morning America. Measuring 183.72 meters (602 feet, 9 inches), or 14 times the length of the Washington Monument, the sesame-oil soaked noodle was fried all in one unbreakable piece, in a hot wok, which took Kuroda a full hour. Don’t miss the strangest food law in every state.

You might think that parachute records are only for the vertically inclined. But on February 24, 2018, Shinichi Ito of Japan broke this record in Davis, California by traveling 46.2 km (28.7 miles). He jumped from a plane and opened his parachute at 25,000 feet to attain this achievement. Is this activity on your bucket list? Read these need-to-know-things before you go skydiving.

Nope, it’s not in San Francisco (good guess, though). As of June 6, 2019, the world’s steepest street is in Harlech, Wales, on a road called Ffordd Pen Llech. Just how steep is it? Ffordd Pen Llech has a gradient of 1:2.67 (that is, a 37.45 percent stretch over fall). Learn about more of the most dangerous roads in the world. 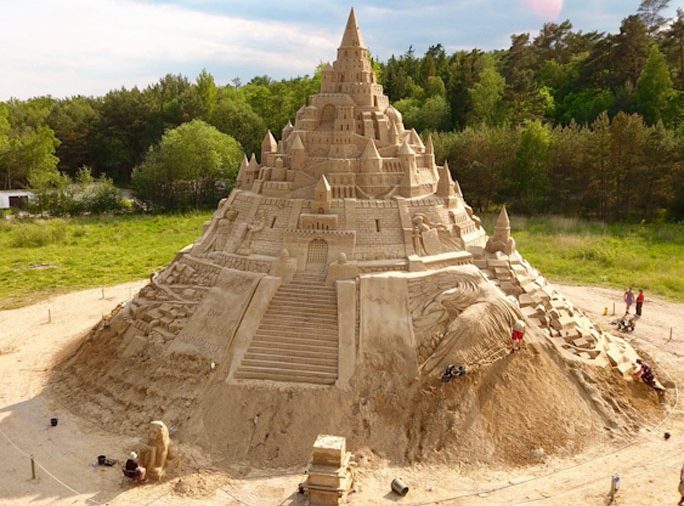 As leaves turn to yellow and orange this autumn, remember the heady, hot days of summer with this record: measuring 17.65 meters (57 feet, 11 inches) tall, the world’s tallest sandcastle was created by Skulptura Projects in Binz, Germany, on June 5, 2019. It took 12 sculptors using 11,000 tons of sand mixed with water three-and-a-half weeks working 8 hour days to build this behemoth. Find out the craziest world record set in every state.