We received more than 1,200 reader entries for our Made in America photo contest; here are the 26 finalists. 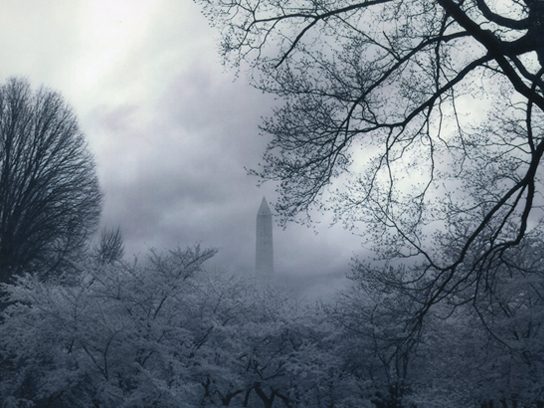 A day out of time

“My girlfriends and I were walking around the National Mall when I noticed dark clouds hovering near the Washington Monument. The cherry blossoms look almost like snow, and the monument appears mysterious and medieval. Through the haze, the same photo I had taken so many times had a new spin to it.”
—Pamela Davis, Newport News, Virginia 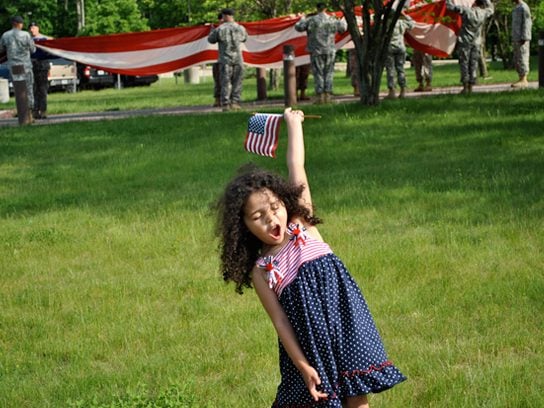 “This photo of my daughter, Imij, was taken on Memorial Day 2011 at the Army base in Fort Drum, New York, after her father—my husband, S.Sgt. Christopher Armstead—led the flag team as they lowered the 20-by-38-foot garrison flag and POW flag. Afterward, Imij went into rock-star mode, doing her best Jimi Hendrix impression (Imij is Jimi spelled backward).”
—Gretchen Armstead, San Antonio, Texas 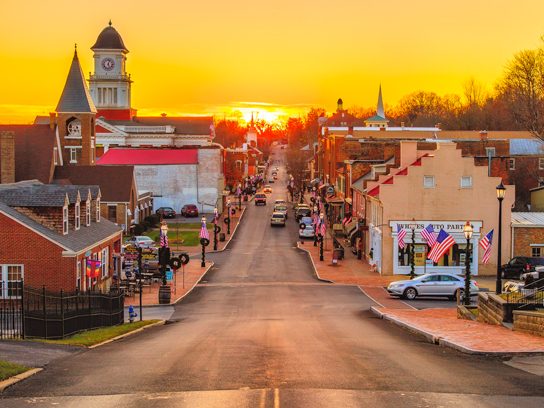 “Jonesborough, the oldest town in Tennessee, is known as the Storytelling Capital of the World. Every October, the community hosts the National Storytelling Festival for aficionados from around the world.”
—Jay Huron, Kingsport, Tennessee 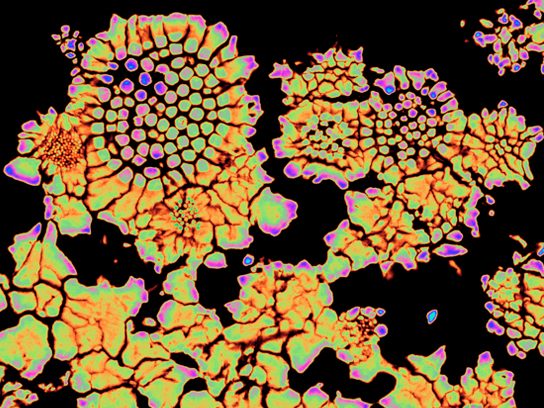 Landscape under a lens

“Using a scanning electron microscope, I magnified pyrite crystal found
in Hudson River sediment. The scientific research on these crystals
suggests that a comet hit the Atlantic Ocean south of Manhattan and
caused a tsunami up the river about 3,000 years ago. This is my version
of a dazzling landscape.”
—Dee Breger, Saratoga Springs, New York 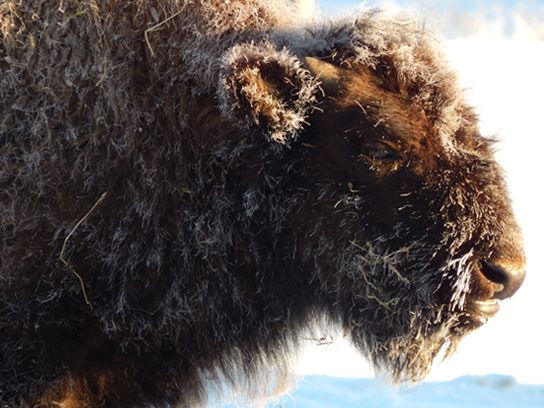 “Even when things seem difficult and everything is coated in frost, there is always a brighter tomorrow to look forward to. I chose this picture of a buffalo calf because it sums up the unique freedom and hopeful future Americans enjoy today.”
—Lee Vaughan, Carthage, Indiana 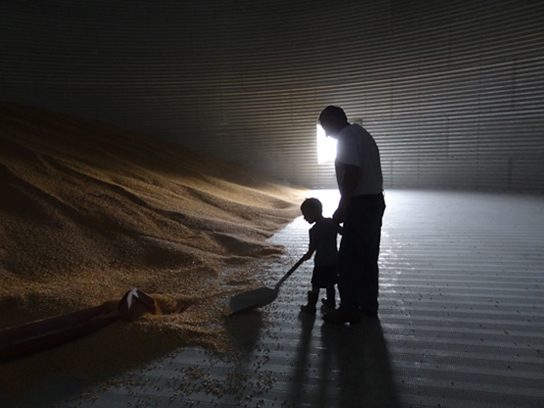 Down on the farm

“Last summer, under Grandpa’s watchful eye, my five-year-old nephew Kyle shoveled loose corn, which is grown on our 4,000-acre farm, into the auger for half an hour. This photo represents ‘Made in America’ not only because of the corn but also because it shows how family values, a work ethic, and a love of farming the land are passed down from generation to generation.”
—Jenny Braun, Hampton, Minnesota 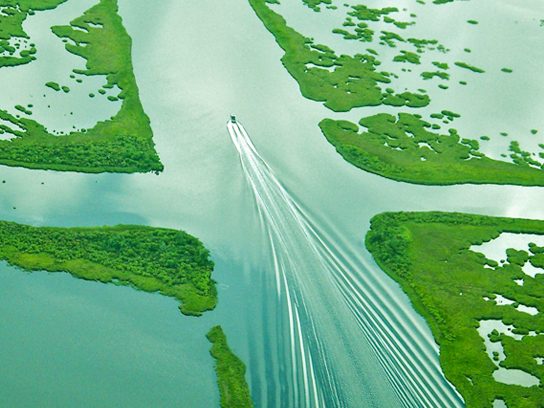 A view to a kill

“I was flying in a seaplane from Morgan City, Louisiana, to Venice, Louisiana, when I captured this aerial view of the state’s ever-changing coastline. Nonstop waves and yearly hurricanes are eroding the land at a frightening pace. There have been many ideas to help fight coastal erosion, but our best bet may be to merely slow down, not stop, Mother Nature.”
—John Schell, Mandeville, Louisiana 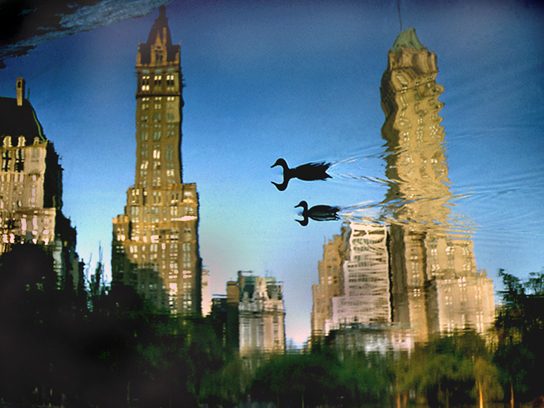 Summer in the city

“On a clear day in Central Park, ducks and a building on Fifth Avenue were reflected in the lake. I decided to turn the picture upside down to add to its mystery.”
—David Camhi, New York, New York 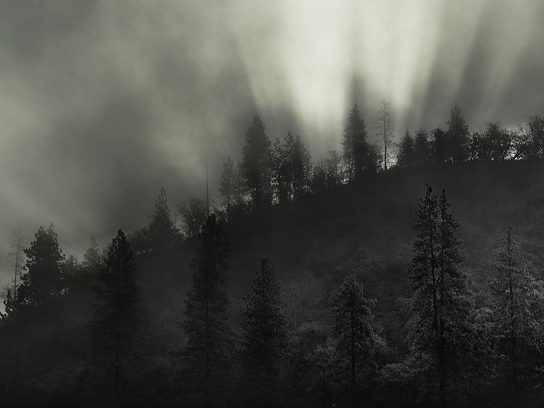 “I took this photo while searching for gold in Northern California. The morning fog was thick, and the sun was strong, creating an eerie effect reminiscent of the past. What was once a land of wealth and opportunity is now dark and desolate.”
—Daniel Baker, Portland, Oregon 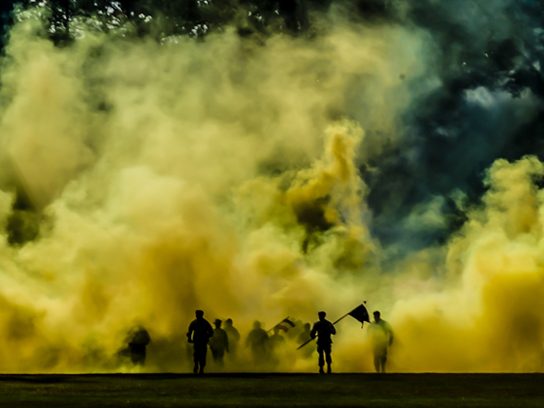 When my son became a man

“I took this photo the day before my son graduated from basic training at the Fort Jackson U.S. Army Training Center in Columbia, South Carolina. He left home a young man, but when I saw him marching through this smoke, I saw a man and a soldier.”
—Jim Freeman, Franklin, Ohio 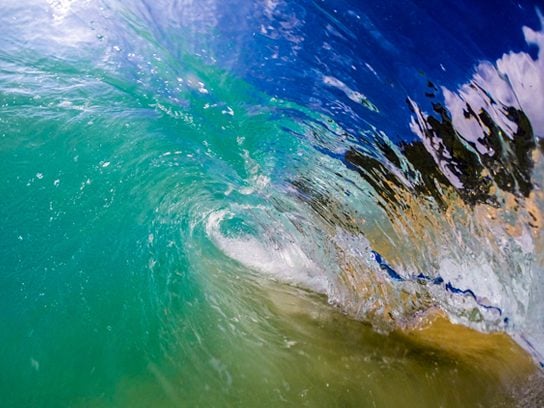 Looking down the barrel

“The ocean is home to so much opportunity for Americans. It creates jobs, fun, relaxation—and great photos. I took this one on Sandy Beach on Oahu, Hawaii.”
—Tom Lurie, Kailua, Hawaii 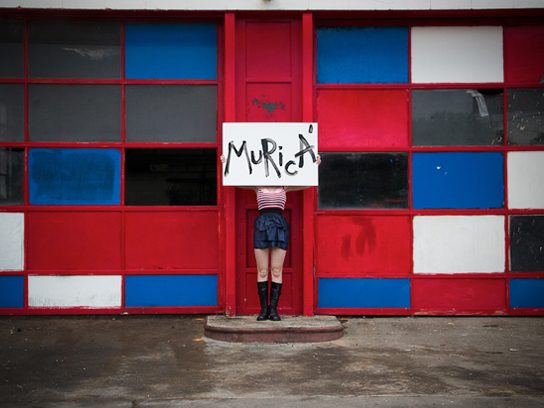 “I grew up in the South and I wouldn’t have had it any other way. My mother taught me how to be a lady, and encouraged me to speak my mind. I played outside until the sun went down, and learned how to shoot guns and ride four-wheelers. Some people view Southerners as uneducated people with thick accents, but not all of us are like that. I’ve known a lot of wonderful Southern people, and I’m glad to be one of them.”
—Samantha Fortenberry, Savannah, Georgia 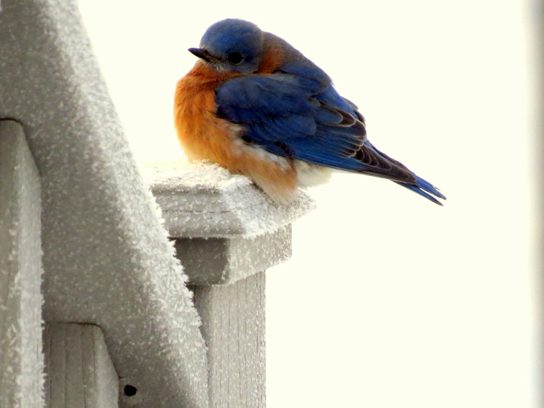 “I had a deck constructed in my backyard with birds in mind. The surface of the deck provides an ideal place to watch and photograph bluebirds as they nest and raise their families. And I specifically requested that the builder put a flat, plain top on each stair rail so birds would have a place to perch.”
—Mary Lou Jubin, Norton, Ohio 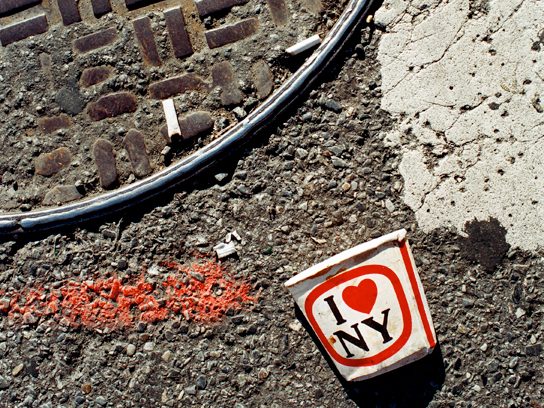 “On Christmas Eve 2001, my husband and I were walking to ground zero, our first time back in the city from our home in upstate New York after the 9/11 attacks, when I noticed this coffee cup. I took the picture in the middle of the road, with a long line of yellow cabs honking at me. I love what the picture represents: despite the dirt of the city, the crushed cup, the bright message is still in your face: I Love NY!”
—Susan Verberg, Ithaca, New York 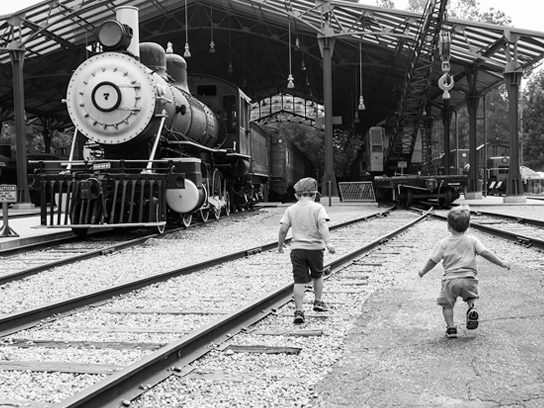 “My kids Dylan and Harrison love to go to Travel Town in Griffith Park to explore the old locomotives and pretend they are conductors and engineers. Nothing says ‘Made in America’ more than boys and trains.”
—Justin Lubin, Reseda, California 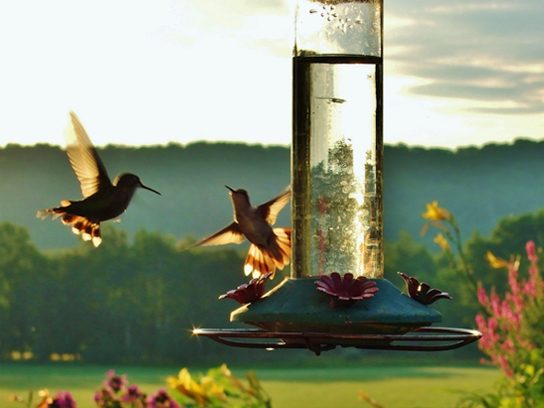 “I enjoy these amazing hummingbirds every summer when they return to northern Michigan. Each morning, I take the hummingbird feeder outside, and often hear their little wings and squawks before I see them. I was lucky to get this picture—hummingbirds are not easy to capture since they move so quickly!”
—Joan Hook, Maple City, Michigan 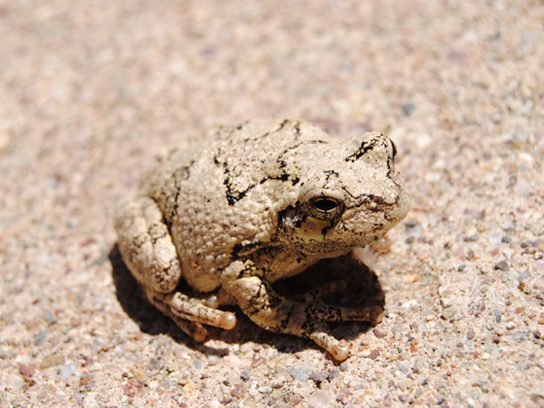 “My neighbor called my sisters and me over one day last summer because she found this frog on her pool deck. I found it amazing that there was a star on its back.”
—Margaret Brochu, Cumberland, Rhode Island 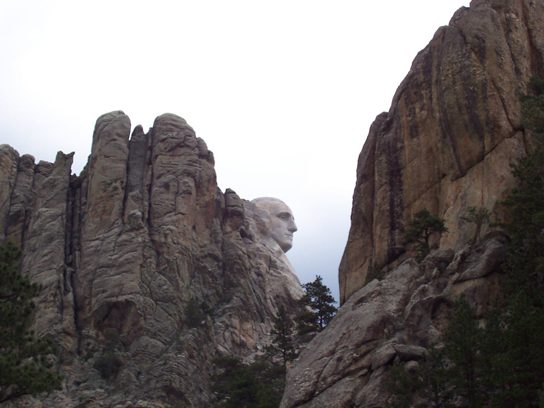 Face in the mountains

“I chose this picture because it’s one of my favorites from a trip I took to Sturgis, South Dakota, in 2007. It’s an unusual view of Mount Rushmore, with the face of George Washington peeking through the mountains.”
—Lu Ann Mahan, Clovis, New Mexico 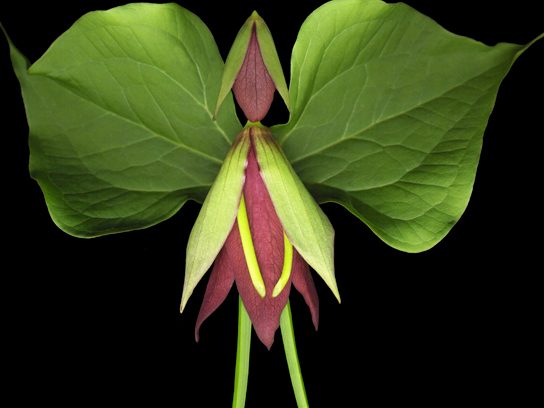 “As an enthusiastic gardener, I have become closely acquainted with the flowers that surround my rural, central New York home. The Trillium erectum, most commonly called red trillium, is a spring wildflower native to the forests of the eastern United States. For this image, I arranged the parts of the flower facedown on the glass of a scanner.”
—Lisa Davis, Fulton, New York 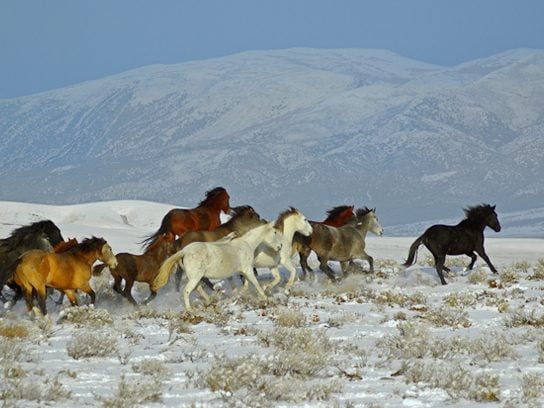 All the wild horses

“This photo of a herd of wild mustang horses was taken in the remote high desert region of Western Utah. My young son and I found them early in the day, hunched with their tails to the wind and falling snow. As the sun came out, the herd moved directly toward us and veered across the dirt road in front of our truck. They were magnificent running across the snow-covered sage with the mountains in the background.”
—DB Young, Pleasant Grove, Utah 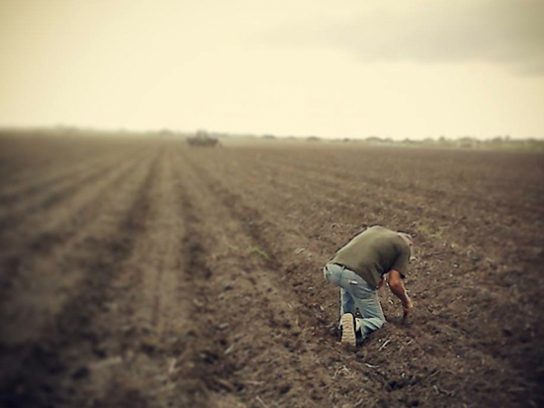 “My grandfather Leonard has been farming in South Texas since 1965. Here, he is checking the seed depth of recently planted cotton seed that will be harvested in August. This photo portrays a man who believes in buying American-made products and a man who served our country in order to preserve that right.”
—Deborah Elbert, Brownsville, Texas 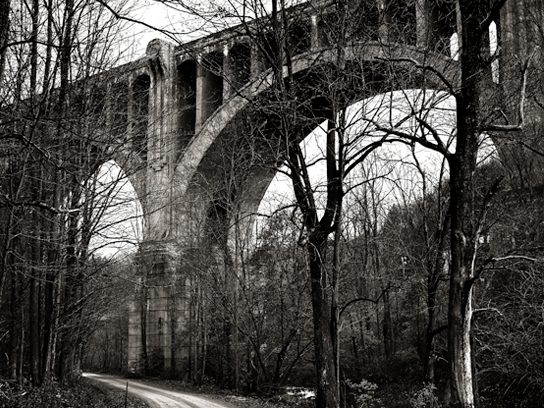 “Built in 1898, the Pony Truss Bridge that stretches between two hills over the Apolacon Creek in Hop Bottom, Pennsylvania, is a beautiful example of American ingenuity, design, and craftsmanship.”
—Larry Lefferts, Endicott, New York 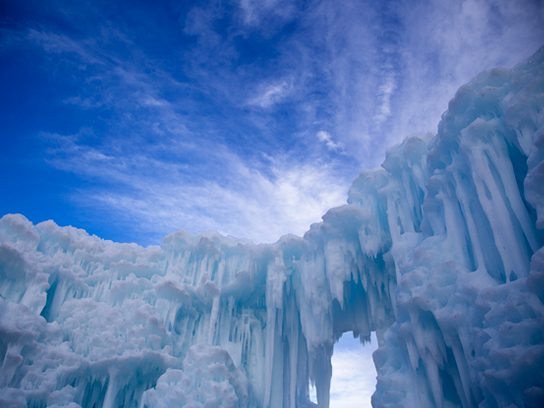 “The Midway Ice Castle, shown here, is located in a small town near Park City, Utah. Its icicles are farmed, then combined to form spectacular caves and mazes. At night, the formations are illuminated with colored lights; during the day the arches stand out against the brilliant blue sky.”
—Heather Stratton, Bountiful, Utah 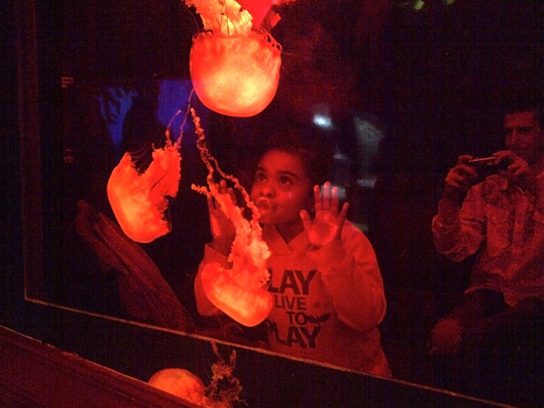 “For my 58th birthday, I took my son, daughter, daughter-in-law and granddaughter to the Newport Aquarium in Cincinnati. We loved the fish, especially the jellies! I sat in my wheelchair on one side of the tank, while my granddaughter, Sophia Grace McGowan, was on the other side, kissing the glass as she peered in, soaking up the jellyfish’s beauty.”
—Laura McGowan, Bellbrook, Ohio 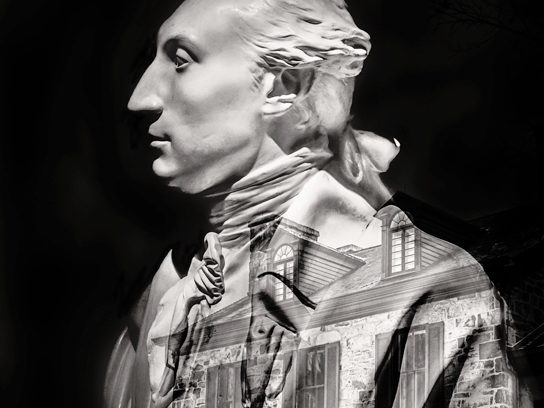 “This photo represents two great men who had a huge influence on America. The bust is of Marquis de LaFayette, a French General in the Revolutionary War, who fought alongside George Washington. The image is of the house of Albert Gallatin, who served as a Secretary of the Treasury under James Madison.”
—Jacki Marino, Morgantown, West Virginia 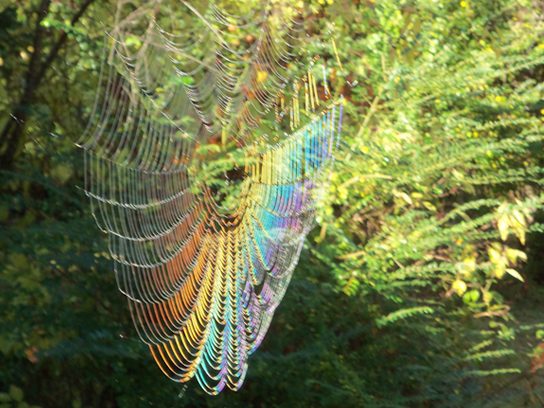 “One sunny day last year, conditions were perfect to see this orb weaver web in all its splendor. A few minutes sooner or later we would have missed its beauty and another of God’s gifts to us.”
—Martha Parham, Macon, Georgia