20 Arrestingly Beautiful Photos That Stand the Test of Time

We asked curators and photographers to each share a remarkable photo that resonated with him or her personally, and the results were absolutely breathtaking. See for yourself with these stunning images that truly are worth (at least!) a thousand words. 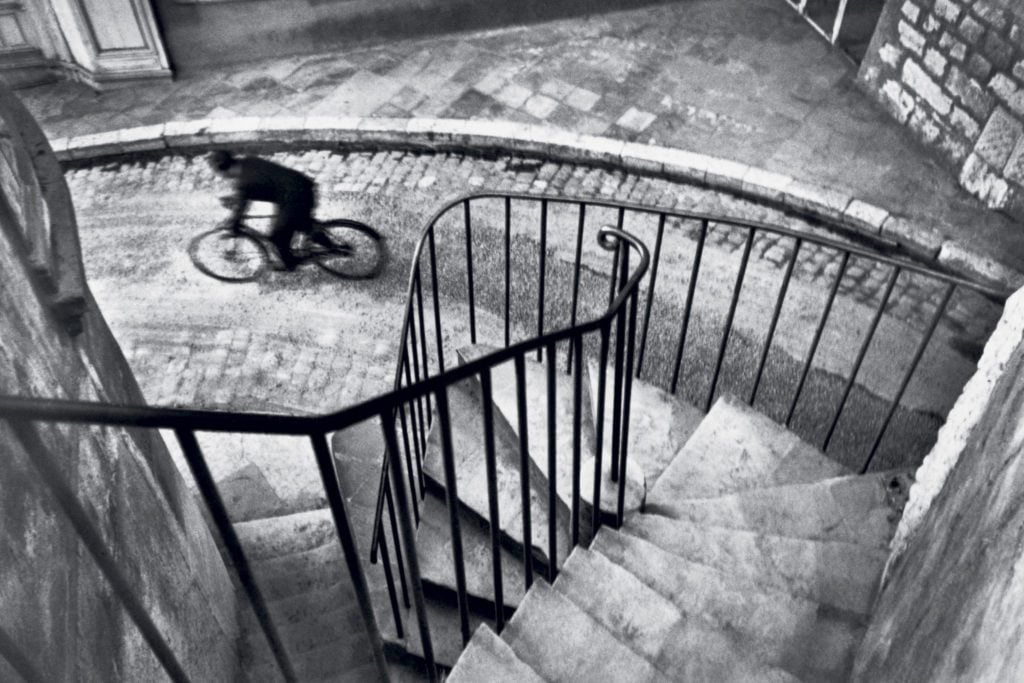 Chosen by Nigel Parry, photographer
“As a teenager in Yorkshire, England, I would while away my lunch breaks with my nose buried in photo books, and this photo always stuck in my mind for its cleverness. It’s essentially a play with lines: They transport the eye around the rectangle and back to the human element. Clearly, Cartier‑Bresson composed it and waited for the decisive moment in which an element of life—it could easily have been a dog or an old lady or a running child—injected itself into the perfect, irritatingly elegant composition to complete this celebration of both photographer and photograph. Pure genius.” Don’t miss these exceptionally rare “National Geographic” photos. 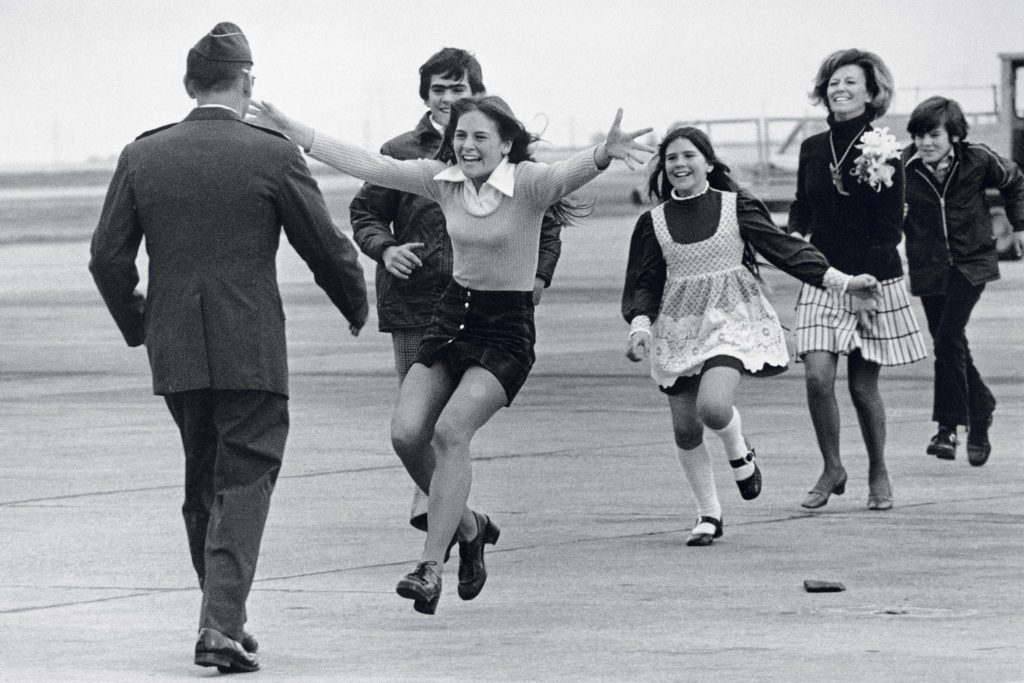 Chosen by Cathy Trost, senior vice president for exhibits and programs at the Newseum
“I have a copy of this photo in my office, and it lifts me up each time I see it. An American prisoner of war is released from captivity in Vietnam in 1973. His family members have waited nearly six years without knowing if they will ever see him again, and they are literally lifted off their feet with excitement at this moment of reunion. The photo symbolizes hope and healing near the end of a bitter war, but for me, it’s all about the love of family.” Hear what a body language expert has to say about these 11 iconic photos. 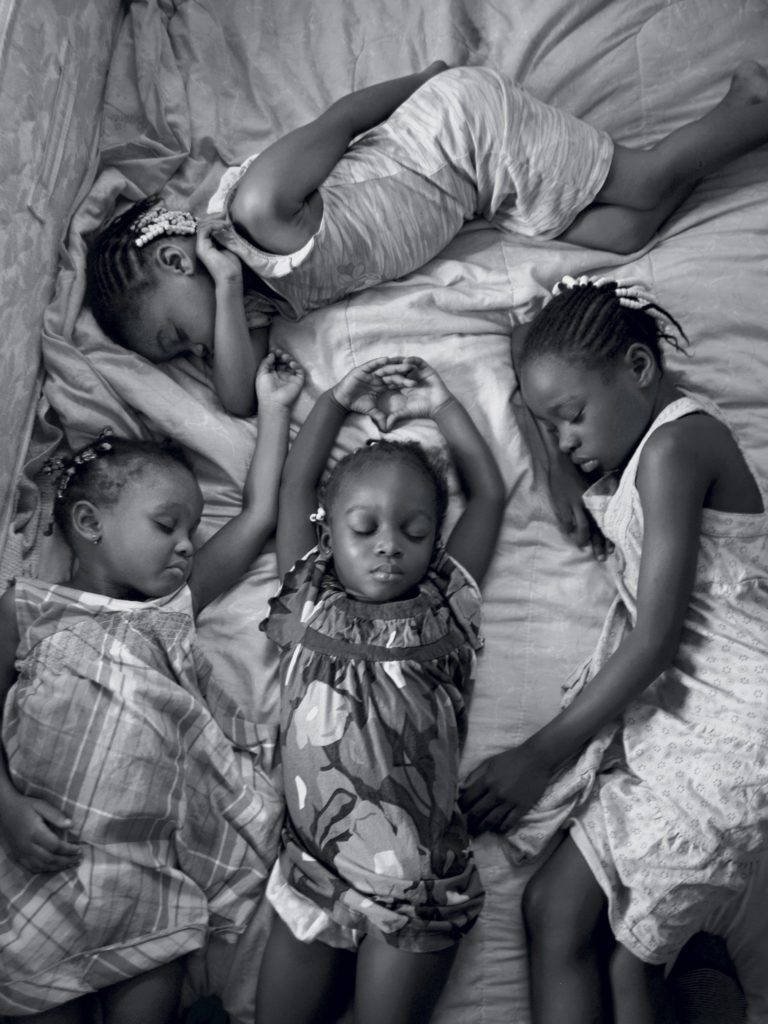 Chosen by Elizabeth Krist, senior photo editor at National Geographic
“This glimpse of four sisters dressed in their Sunday best after church, taking an afternoon nap in the bed they all share in their Miami home, is included in the exhibition and book Women of Vision. The image is a testament to the strange privilege that photographers earn, sharing our most intimate moments—we’re never more vulnerable than when we’re asleep.” To instantly lift your mood, have a look at these 17 pictures of cute baby wild animals. 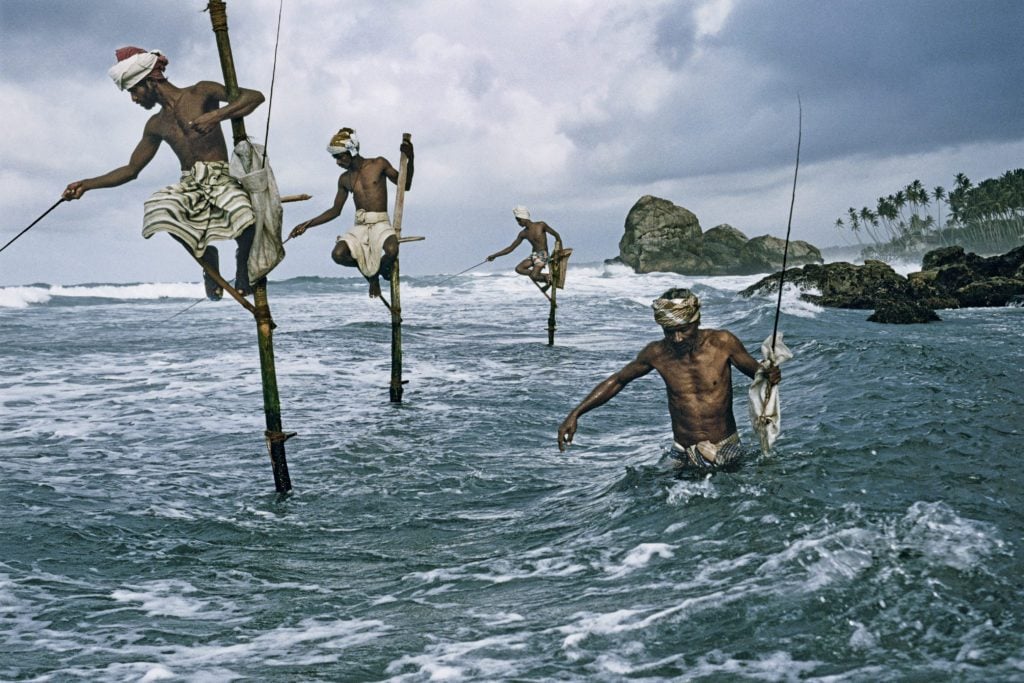 Chosen by John Echave, executive producer at Blue Lagoon Productions
“I edited Steve’s stories for about 20 years at National Geographic. Sri Lanka was torn by war when he made this photograph documenting subsistence fishing. The way each fisherman holds his rod is reminiscent of an orchestra leader using his baton delicately but with precision. The color palette is optimistic, and the waves are alluring rather than menacing, unlike life on the rest of the island then.” Get a look at some rare vintage photos of America’s national parks. 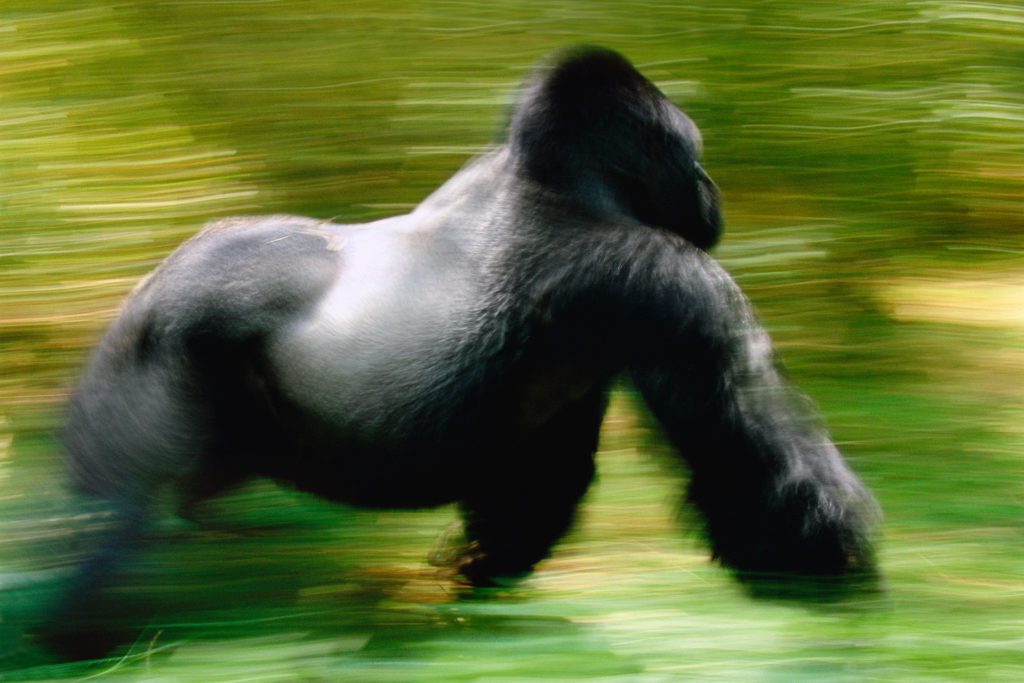 Chosen by MaryAnne Golon, director of photography at the Washington Post
“My photography collection consists primarily of black-and‑white prints of dark subjects like war, famine, poverty, and neglect. For some visual relief, I approached Tom Mangelsen years ago to buy one of his images. When I chose this photo of a silverback gorilla running through the green mountains of Rwanda, he laughed and said, ‘Of all the photographs in my gallery, you have selected the only war picture!’ The silverback is charging a younger male who had shown interest in one of the females. I still find this image soothing.” Here are some more gorgeous animal photos you need to see. 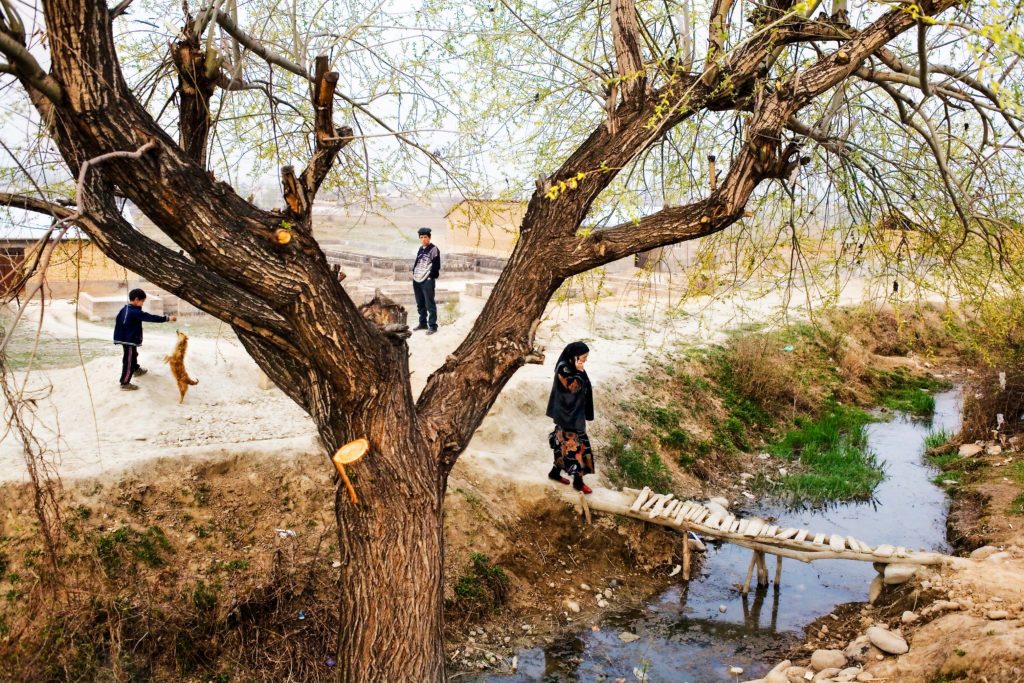 Chosen by Casey Kelbaugh, founder and chairman of Slideluck
“Drake generously donated a print of this photograph to my fund-raiser two years ago, so I had the pleasure of spending time with it. The picture is from an extremely rich body of work about two rivers that cut through often-overlooked parts of Central Asia. Taken in a border town in the Fergana Valley in Karasu, Kyrgyzstan, the image is divided by the tree branches into three vignettes, each with a different type of villager at a particular stage of life. The photograph is as timeless as any Pieter Bruegel the Elder painting from the 16th century.” 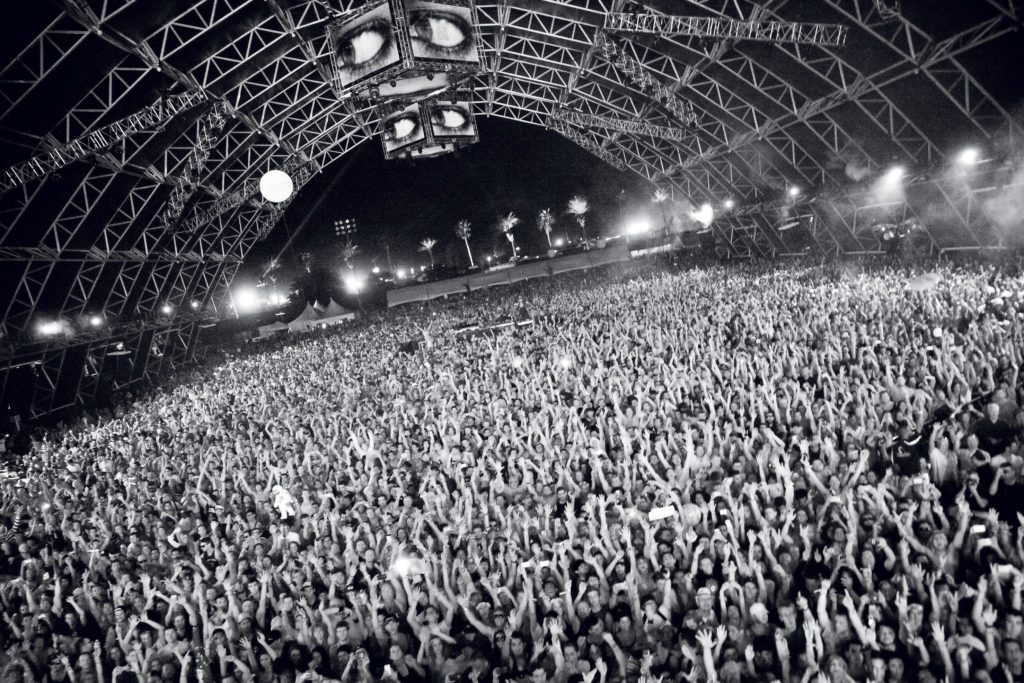 Chosen by Markus Spiering, Head of Product at Flickr
“I follow other musicians on Flickr, but Moby’s photos are unique. This one [shot at the Coachella Festival in Indio, California] is well made, but it also reflects authenticity. You know, when, as an artist, you go out onstage and something is going to happen, you approach the microphone in the center of the stage, and the crowd is cheering and excited and holding up their phones to take pictures—to see a show from the artist’s perspective is pretty fantastic! I wish that when I gave a presentation, this would happen to me!” You also need to see these beautifully haunting photos of real American ghost towns. 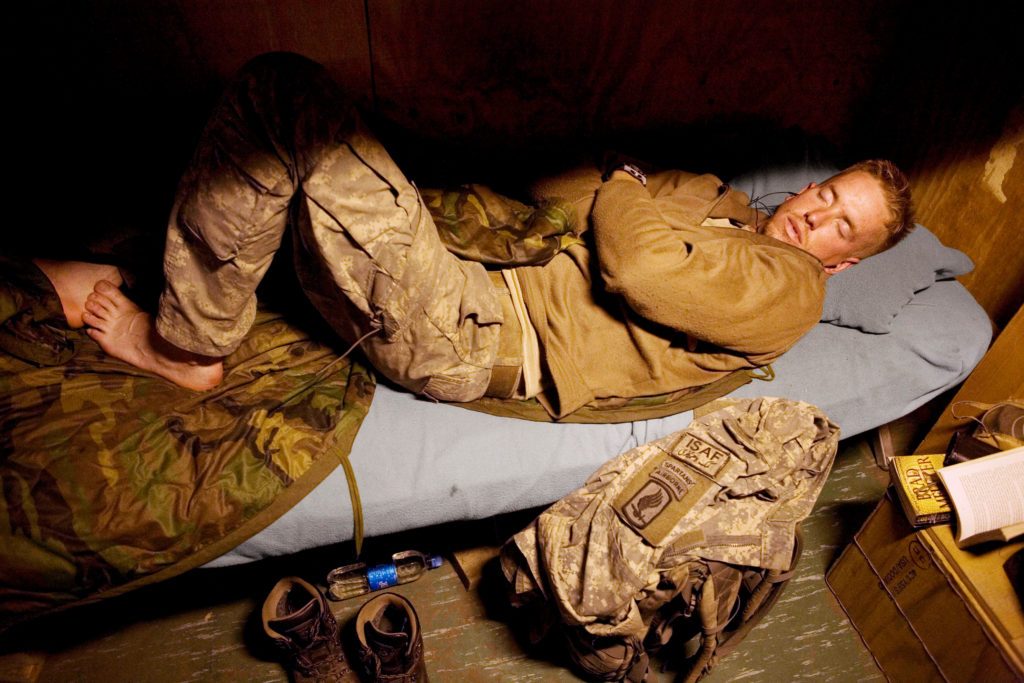 Chosen by Sebastian Junger, author of The Perfect Storm, journalist, and co-director with Hetherington of the Oscar-nominated film Restrepo
“Tim took this photograph in 2008 at a remote American outpost in Afghanistan called Restrepo. The first time I saw him taking photos of sleeping soldiers, I asked him what he was doing, and he said, ‘Don’t you get it? This is how their mothers see them.’ War is fought by vulnerable boys who are desperately trying to be tough, grown men. This image shows that truth much more powerfully than any combat photo ever could.”

Hetherington was killed in 2011 while on assignment in Libya. He was 40. 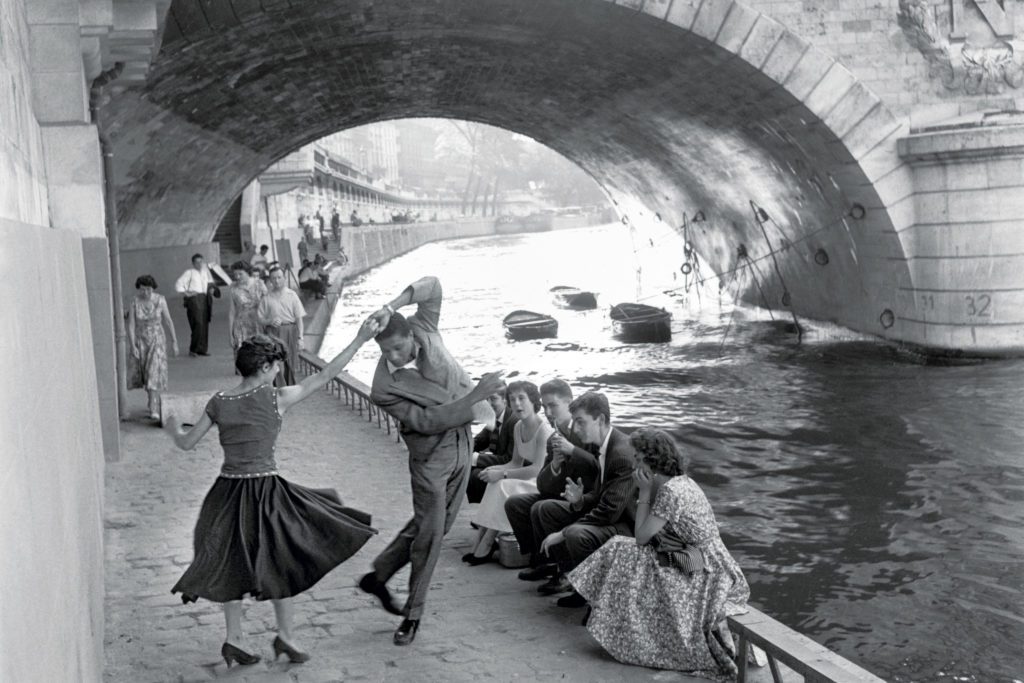 Chosen by Melanie Dunea, American portrait photographer
“In the late ’80s, I moved to Paris in the hopes of becoming the next Henri Cartier-Bresson [the influential French photographer]. I loved his work and thought that by eating, breathing, and living in Paris, I, too, could become a photographic storyteller. In Paris, young and alone, I found myself walking and walking, always taking pictures. I never felt lonely; beauty was everywhere. I happened upon this photograph by Paul Almasy. What a moment! What’s the story? Who are the dancers?” Get a look at some fascinating vintage photos that you won’t find in history books. 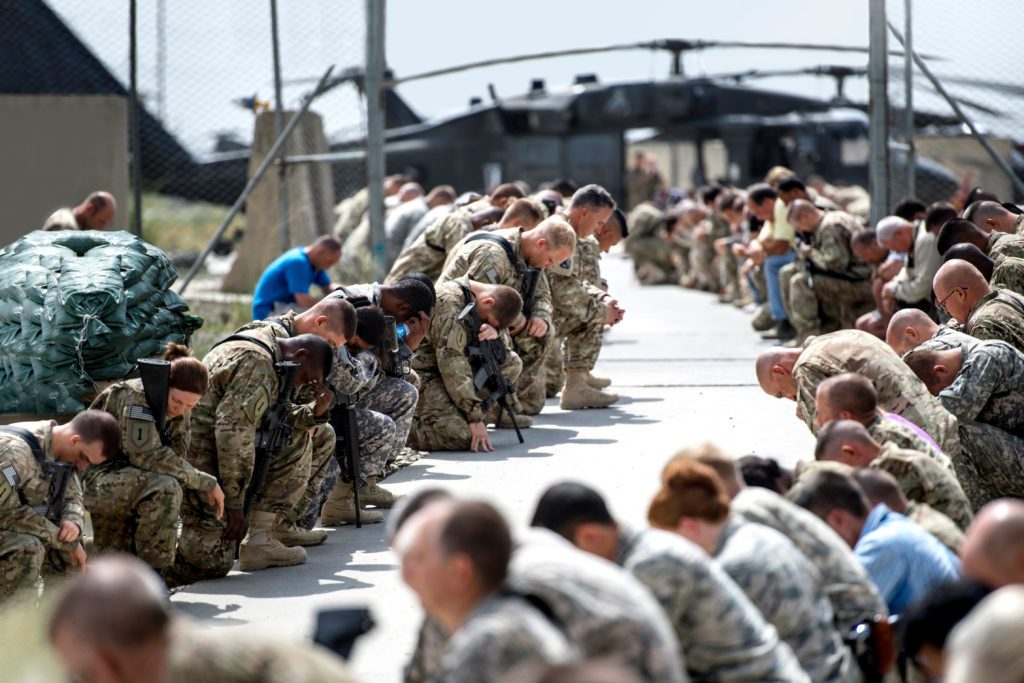 Chosen by Steven Hartov, author, with Cunningham, of Afghanistan: On the Bounce
“Robert took this photograph at a forward operating base in eastern Afghanistan, capturing the silence and solemnity of a hero-ramp ceremony. Just fallen in combat, draped in an American flag, a soldier passes through a cordon of comrades. This is a moment of secrets kept, for only his warrior brothers and sisters know that he is gone. It will be some time before his wife gasps with the news. His parents and children haven’t yet been informed. Only later will they know that 200 souls wept here with him and served as his most devoted bearers to that final fight.” 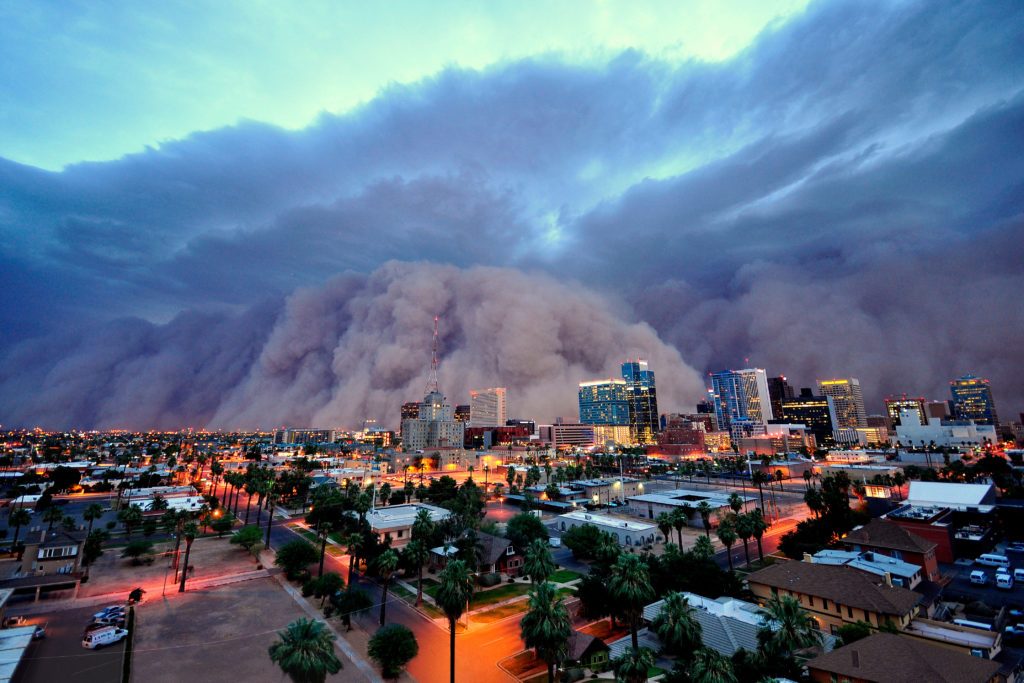 Chosen by Joel N. Myers, founder and president of AccuWeather
A mile-high dust storm made history on July 5, 2011, as it swept through Phoenix, bringing with it near-zero visibility, a trail of debris, and power outages for 10,000 customers. “This dramatic picture shows the awesome power of nature,” says Myers. “Flashier events such as tornadoes, hurricanes, and hail get more notoriety, but episodes like this can have a significant impact on people. High winds on very dry soil will whip up these kinds of storms. There’s nothing in nature that humans can control—we only have the ability to prepare people, to warn them so it’s not a surprise.” Have a look at these rare, vintage photos of what winter used to look like back in the day. 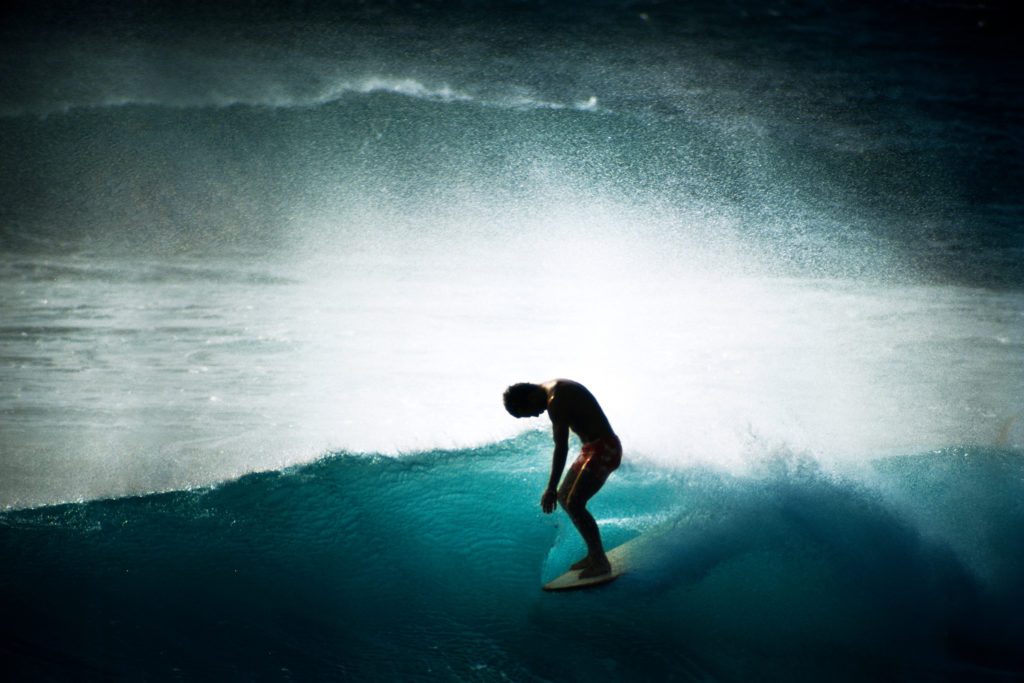 Chosen by Karen Rinaldi, executive editor at HarperCollins
“This photo—Midget Farrelly Surfing Shore Break at Makaha, 1968—is all about the contradictory notion of control and surrender. It lives with me everywhere I go.” 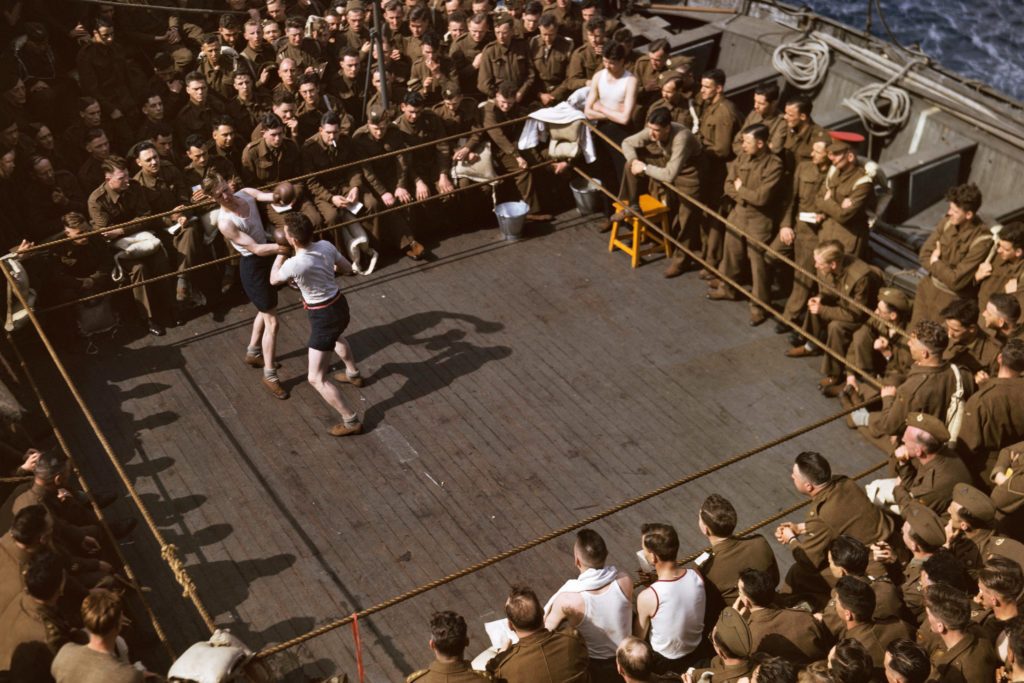 Chosen by Cynthia Young, curator for the International Center of Photography
“This photograph strikes me every time I see it. Reminiscent of a Thomas Eakins painting, it is a newly discovered color image by famed photojournalist Robert Capa, shot with Kodachrome film in April 1943. It shows a boxing match on board a troopship of British Tommies traveling to Casablanca for deployment–the fight before the fight.” 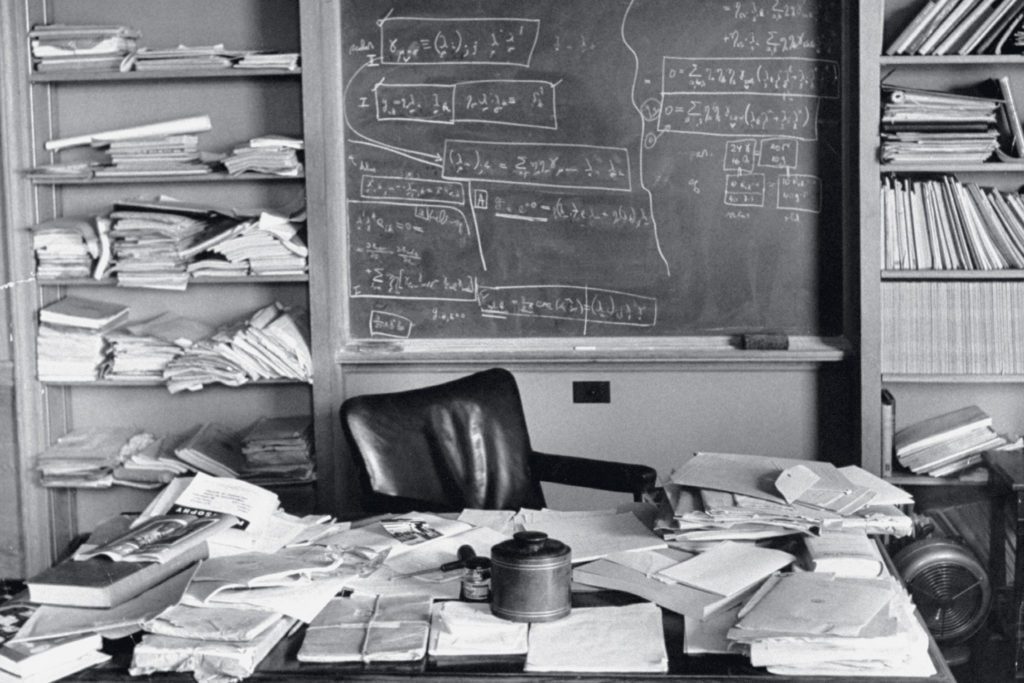 Chosen by Michio Kaku, theoretical physicist
On April 18, 1955, just hours after Albert Einstein’s death, a Life magazine photographer captured the Nobel laureate’s office in Princeton, New Jersey. “This is the photo that changed my life,” says Michio Kaku, author of Einstein’s Cosmos. “As a child of eight, I was fascinated that on his desk were the unfinished notes of his ‘theory of everything.’ I decided then and there that I would try to finish it. This, to me, was greater than any adventure story.” Get a look at some images of what school was like 100 years ago. 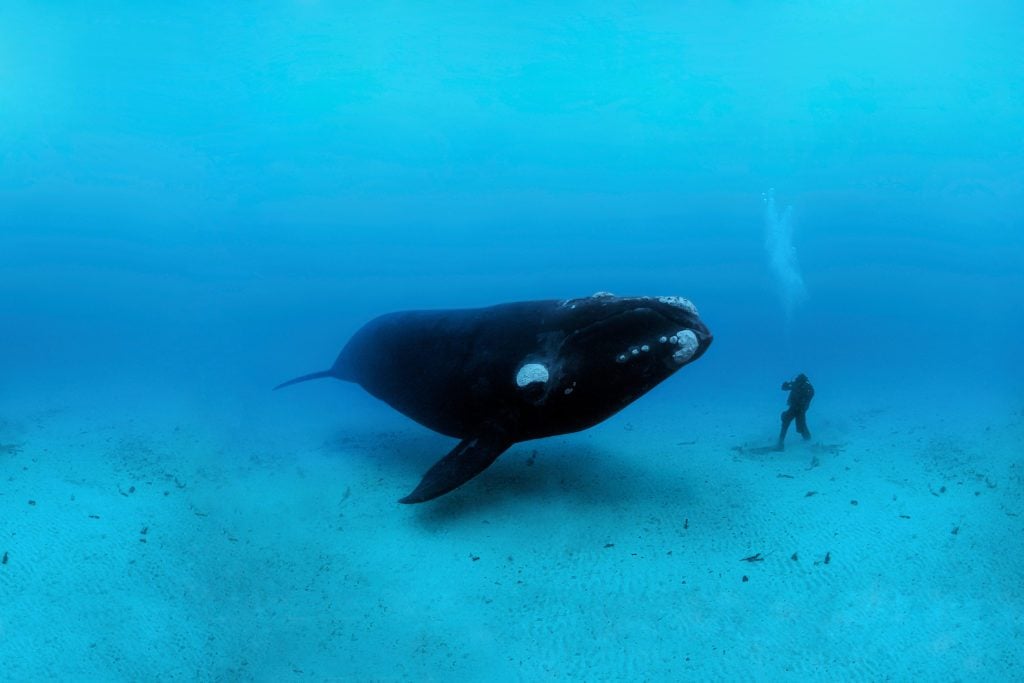 Chosen by Leigh Henry, senior policy advisor at the World Wildlife Fund
“This is a southern right whale, which is recovering from near extinction, thanks to the ban on commercial whaling. I love this photo because it conveys trust between whale and human—a trust we have a responsibility not to betray. I work every day to ensure that my daughters grow up in a world where encounters like this remain a real possibility, not photographic history.” Don’t miss these 20 incredible underwater photos ever taken. 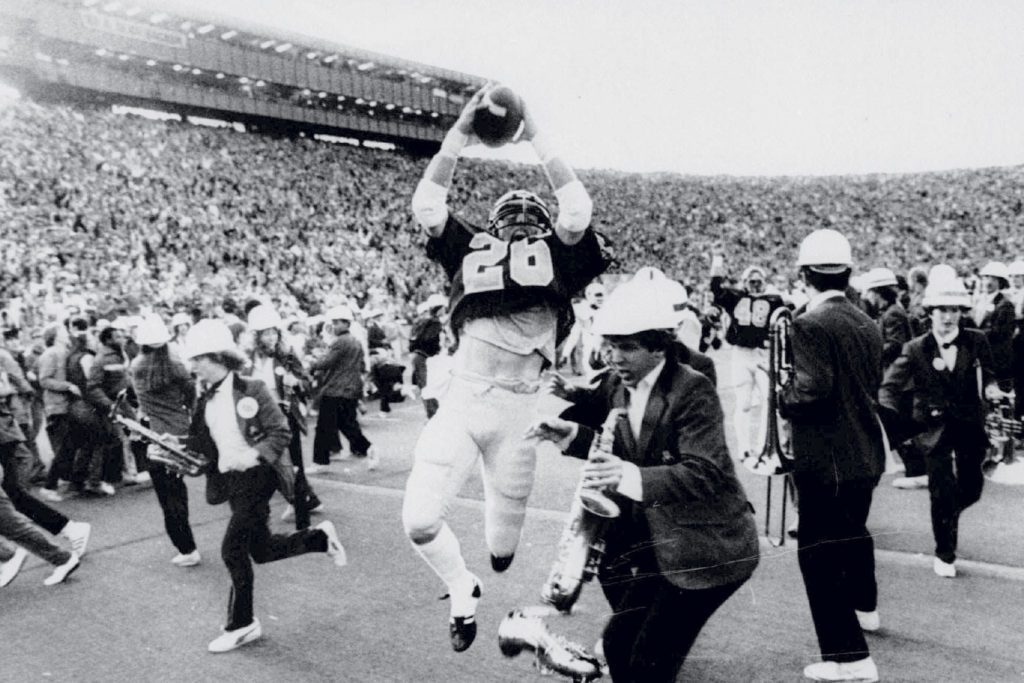 Chosen by Rod Gilmore, ESPN college football analyst
In this iconic photo taken on November 20, 1982, the California Golden Bears, trailing rival Stanford Cardinal by a point, executed what is now called The Play—with four seconds remaining. As the Cardinal marching band poured onto the field, California returned a kickoff, with a member of its defense barreling through the band to score the winning touchdown. Gilmore, then a defensive back for Stanford, reflects, “I laugh a lot more about it now, but the first five or ten years after, I cringed. I think it’s safe to say we’ve all kind of healed from it.” 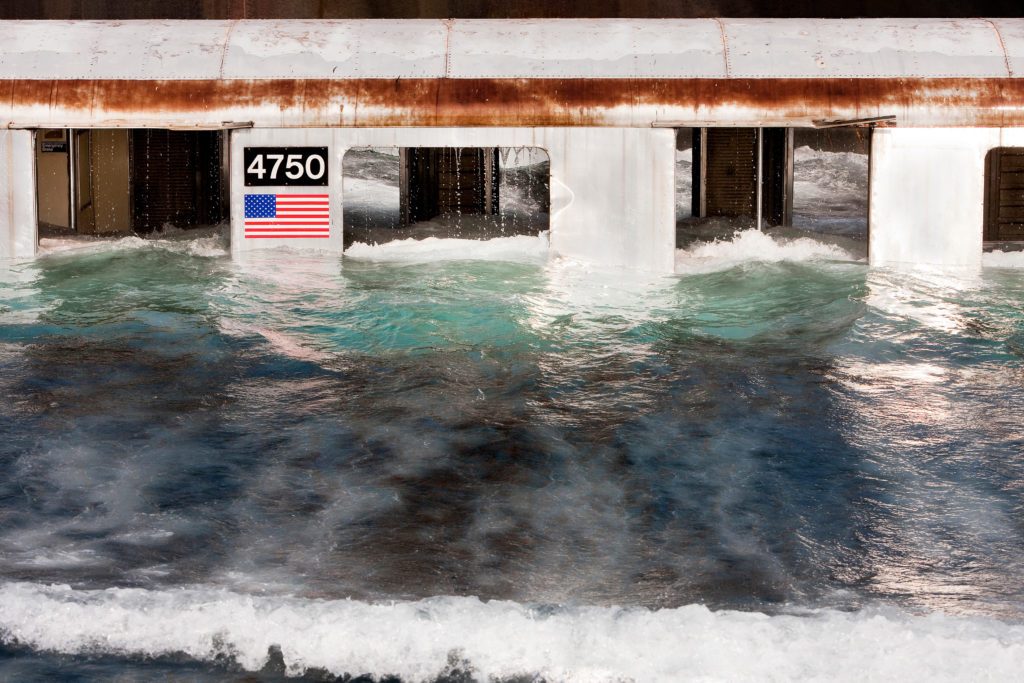 Chosen by Jeff Tinsman, artificial-reef program manager at the Delaware Division of Fish and Wildlife
“The first one was shocking and looked out of place: a retired New York City subway car sinking slowly at an artificial reef site off the Delaware coast. We look for materials that will enhance fish habitats, and subway cars are unique. They almost always land upright, and with all the door and window openings, they become condominiums for black sea bass and tautog. After 40 years on the rails, these cars have a second life in the briny Atlantic.” You’ll never believe that these 16 photos shot with early portable cameras still exist. 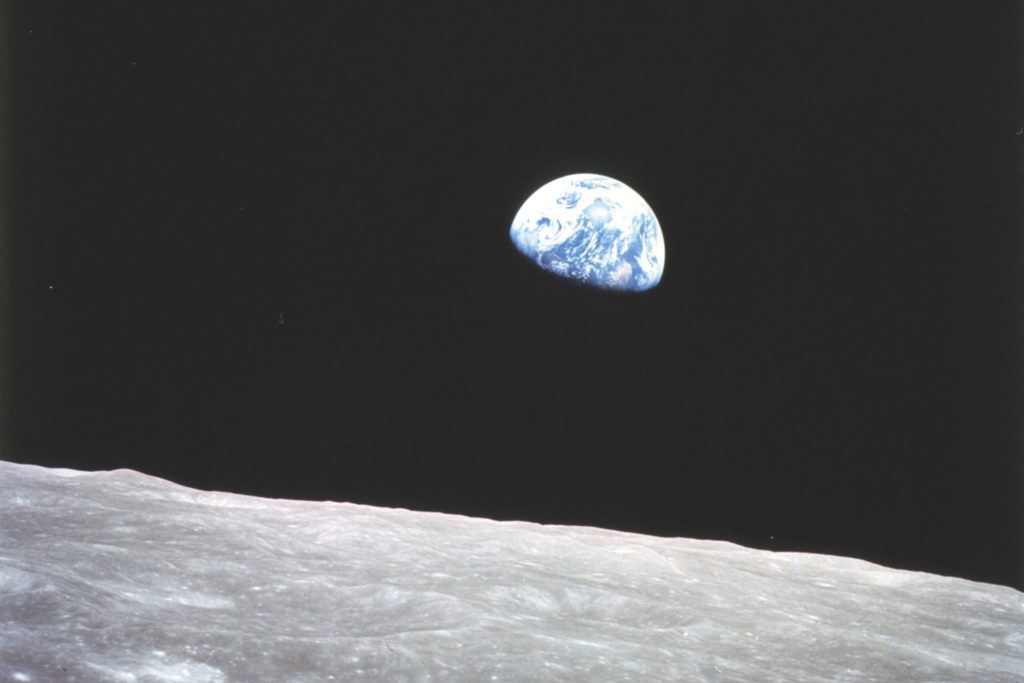 Chosen by Al Gore, chair of the Climate Reality Project
“Taken by Apollo 8 astronaut Bill Anders on Christmas Eve in 1968, Earthrise showed for the first time the delicate balance between our planet’s beauty and the dark void in which it resides. This photo had a profound effect on our global consciousness and, in turn, gave birth to the modern environmental movement.” 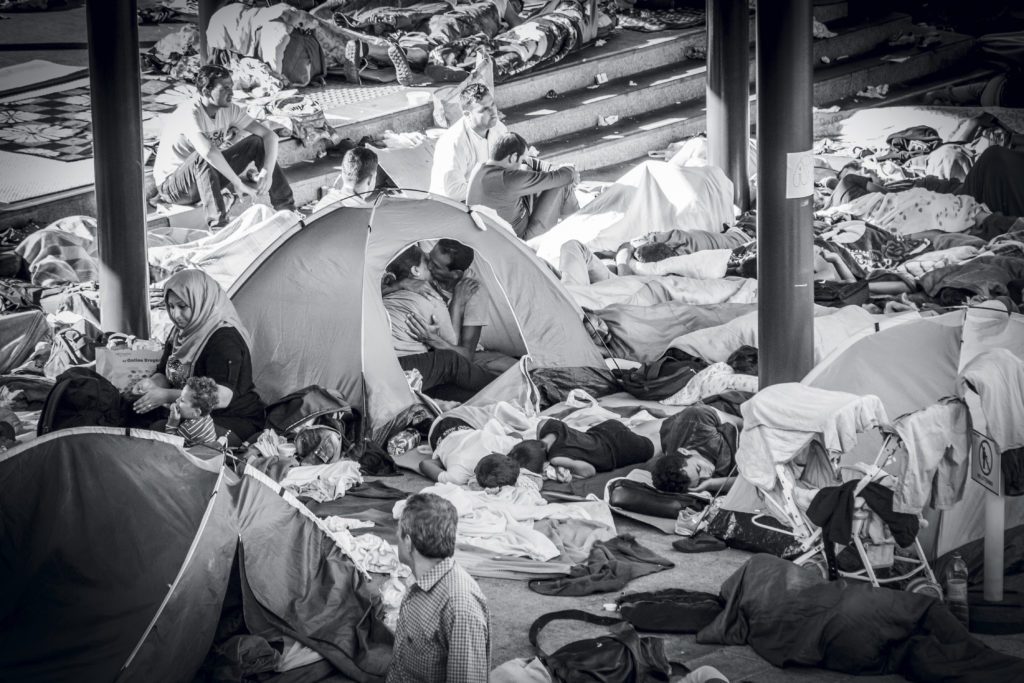 Photograph by Chosen by Omid Safi, director of the Duke Islamic Studies Center and onbeing.org columnist
Among images of Syrian refugees in a makeshift camp inside a Budapest train station, “it was the black-and-white photo that grabbed my heart. A moment of affection, tenderness, and love, in the midst of months of chaos. In their love, their tenderness, and their hope, there is hope for all of us.” Check out these rarely seen photos of JFK and Jackie Kennedy. 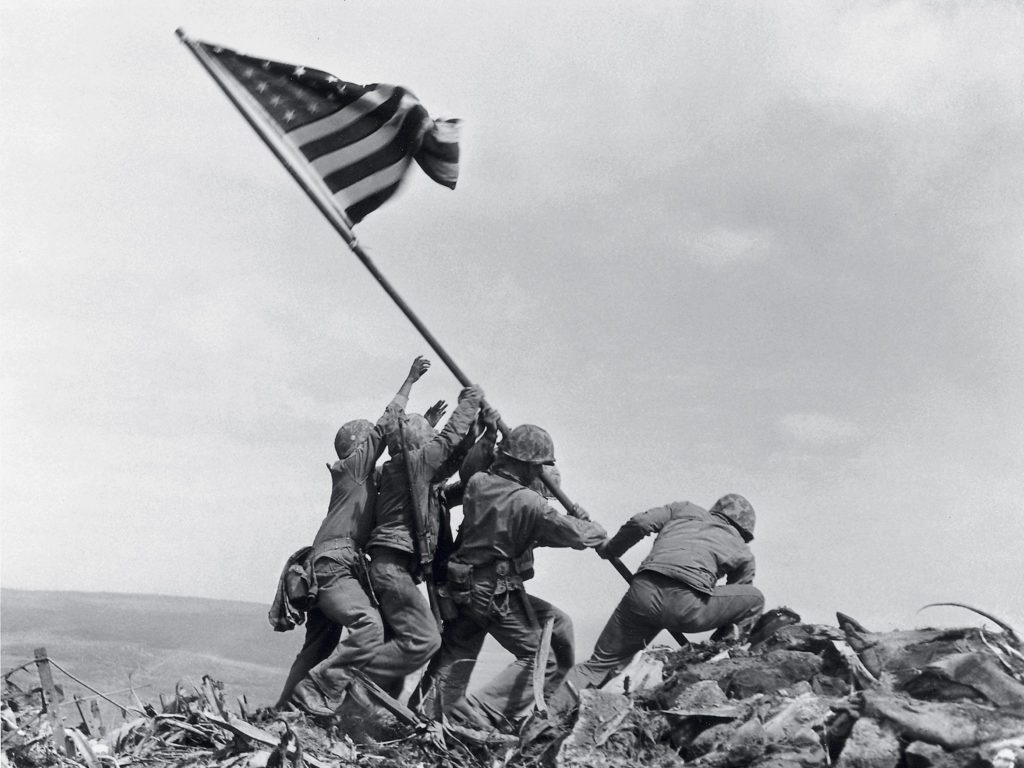 Chosen by Paul Taylor, choreographer
“When I saw this photo, which was taken during WWII at the Battle of Iwo Jima, it appealed to my patriotism. I used it in my dance From Sea to Shining Sea as one of the living pictures, creating a live image onstage identical to the photo to symbolize the American spirit.” Next, see if you can guess in which decade these amazing vintage photos were taken.