Who Is Princess Estelle? 14 Things You Don’t Know About the Young Swedish Royal

The future Queen of Sweden is every bit as cute as the Windsor children!

Royal watchers tend to focus on the Windsor family of Britain: Queen Elizabeth II, Princes William and Harry, and their adorable children. But if you haven’t had your fill of royal news, events, and fashion, check out some of the other royal families of Europe—yep, there are a bunch of other countries that also have monarchies. One very popular royal family is Sweden’s, which includes the young future heir to the throne, Princess Estelle. The Scandinavian cutie will be celebrating her eighth birthday on February 23, so now’s a great time to get to know her. Be sure to check out these royal birthday traditions you didn’t know existed.

She’s second in line to the throne

As in many other countries, traditionally the Swedish crown was passed to male heirs only, but in 1980 the law was changed to allow the oldest child, regardless of gender, to inherit the throne. This meant that Princess Estelle’s mother, Princess Victoria, who was just a child of three, actually took the throne from her younger brother, then called Crown Prince Carl Philip (but as he was just a baby, he didn’t complain). Victoria is now called Crown Princess. Born in 2012, Princess Estelle will be the first female heir apparent from birth and is now second in line to the throne behind her mother and grandfather, King Carl XVI Gustaf. A constitutional monarchy, Sweden is one of the most peaceful countries in the world.

Princess Estelle has a younger brother, Prince Oscar, who’s third in line to the throne and who’s turning four years old on March 2. The two adorable siblings appear to get along well, and often partake in family activities such as skiing, being outdoors, and spending time together on vacation. In one adorable Instagram snap taken by their mother, the pair are giggling while “on holiday,” with Princess Estelle in blue summer stripes and Prince Oscar in a baseball cap and a shirt reading, “surf.” These two rival British Princess Charlotte and Prince George for the cutest brother-sister bonding. Check out more rarely seen photos of royal siblings.

She’s checked out her crown

Even at her young age, Princess Estelle is starting to learn a little more about what it means to be a monarch. She took a visit to the Treasury, located in the vaults of the Royal Palace, to view the “regalia,” crowns and other items used in royal ceremonies. “All members of the Royal Family have an assigned crown,” the caption for the photo reads. “In the Treasury, Princess Estelle got to look at the Crown Princess’s crown, ‘the Crown Prince,’ from 1650. The Princess also got to see the crown she herself was awarded, ‘Prince Oscar’s (II) Crown Prince,’ from 1844.” The royal family doesn’t actually wear the crowns anymore, so they are kept on permanent exhibit for the public to see. As part of royal life, Princess Estelle also has these other strict rules royal children need to follow.

Her father was a personal trainer

Rounding out Princess Estelle’s immediate family is her dad, Prince Daniel. He was actually her mother’s personal trainer—although it might seem a bit “ordinary” to meet at the gym, Princess Victoria’s siblings married commoners as well. Princess Estelle shares a love of fitness, sports, and being active with her father—they were spotted together last year at the Women’s World Cup in France, and the young princess also raced in Pep Day, led by Prince Daniel to encourage a healthy lifestyle for children. At the event the year before, the fearless Estelle also tried skateboarding—clearly, she inherited her father (and mother’s) athleticism.

Princess Estelle has another title

When she was born, the young princess was given another title as well, Duchess of Ostergotland, a region in the southern part of Sweden not far from Stockholm. When she was just two years old, Princess Estelle first visited the area, and even opened a trail called the Fairytale Path at Takern Visitor Centre, along which are little statues, activities for children, and stops that each tell part of the fairytale. The nature center sits along Lake Takern, which is home to a bird reserve. During her trip, the toddler also enjoyed visiting historic Linkoping Castle, the oldest secular building in Sweden, where one room was named “Duchess Estelle’s Room.”

The cold never bothered her anyway

Like fellow Scandinavian royal Elsa in Frozen, Princess Estelle isn’t afraid to go out in the snow. And as the Swedes say, there is no bad weather, only bad clothes. One royal video posted on YouTube shows the family having a snowball fight, sledding, and enjoying the outdoors before cozying up in front of the fire at home. Princess Estelle has even been pictured wielding a snowball—without gloves—at the tender age of three. Her birthday Instagram post last year featured the princess and her brother out in the snow, riding in a horse-drawn sleigh. Princess Estelle and her family are also avid skiers: One Instagram video shows all four of them heading down the slopes together. This could be one of the secrets of why Scandinavians are so healthy. 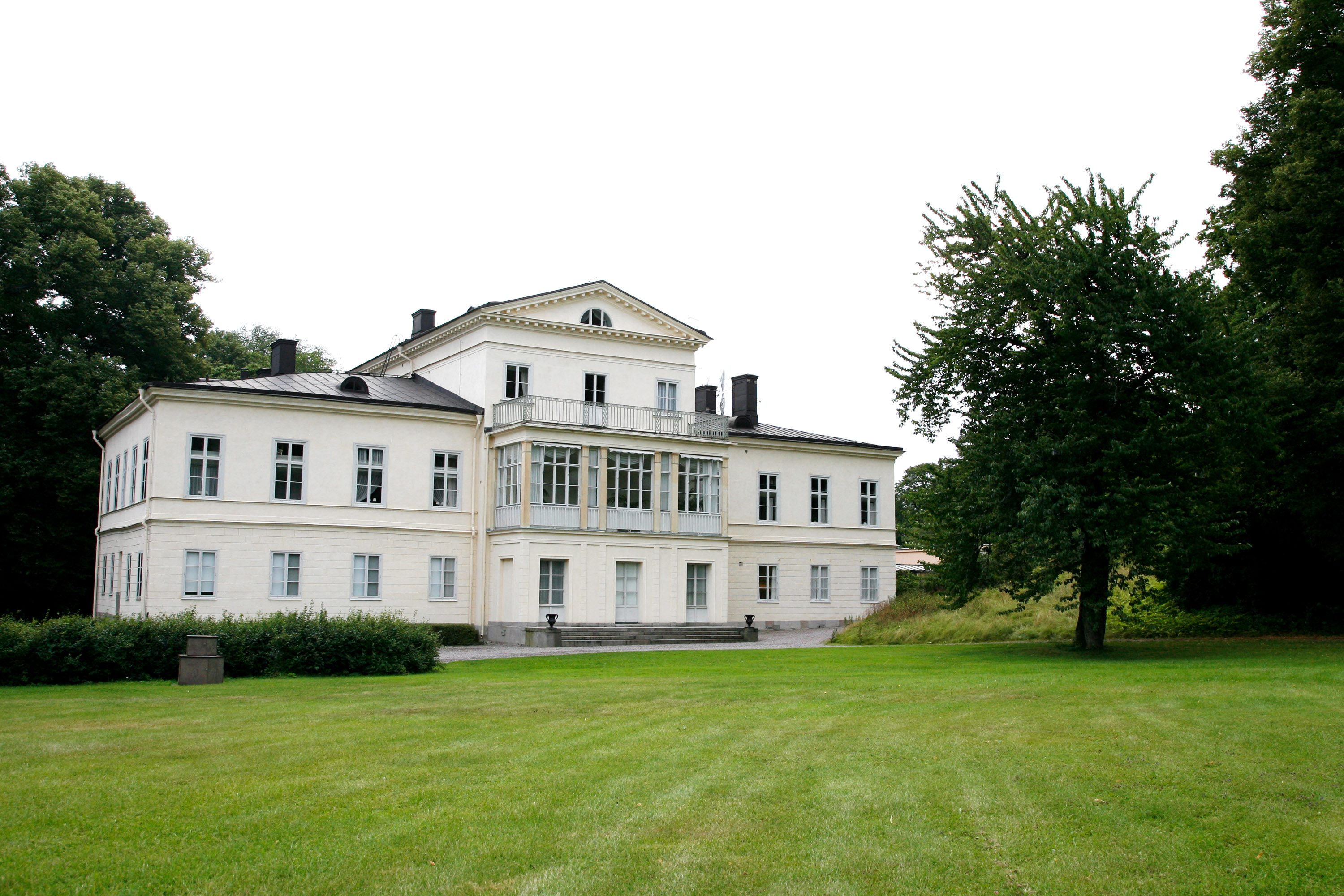 She lives in a palace

Perhaps not surprisingly, this princess lives in a palace, Haga Palace in Stockholm to be precise. But as palaces go, this one actually looks quite comfortable and cozy, unlike the King’s imposing Royal Palace a few minutes away. Haga Palace was home to the current King’s parents, but when he was just a baby his father was killed in an airplane crash in 1947, and his mother and her five children moved into the Royal Palace. Haga then became a guest house for visiting statesmen and dignitaries until Crown Princess Victoria and Prince Daniel moved in, in 2010. The royal family often releases photos of Princess Estelle and Prince Oscar playing in the garden.

She just had a foundation named after her

But in other ways, Princess Estelle’s life is unlike other children—such as having a foundation named in her honor: The Princess Estelle Cultural Foundation, which was just announced. “With the initiative, the Crown Princess couple wants to emphasize the importance of art and culture to an open and modern society,” the announcement reads. “The focus of the foundation is initially to continue the temporary sculpture exhibition project during the summer of 2020 at [royal park] Djurgarden, part of the quest to make contemporary art accessible to a wide audience.” The sculptures in the park are totally free to the public.

She recently broke her leg skiing

But skiing is not without its dangers: Just this past New Year’s, Princess Estelle broke her leg while on a skiing vacation with her family in the Alps. A palace spokesperson reportedly said that the princess was taken to the hospital, where X-rays confirmed the fracture, and her leg was put in a cast. She was on crutches but was “otherwise well,” the spokesperson said—apparently, the family didn’t even end their vacation early. Princess Estelle, though, seemed to be following in her mother’s footsteps with the accident: Princess Victoria also ended up with her leg in a brace after spraining her ankle during Princess Estelle’s first skiing holiday, at the end of 2013.

She has a pony named Viktor

The sleigh Princess Estelle rode in last year for her birthday was pulled by the family’s Welsh pony, Viktor. She was also seen lovingly petting Viktor after the ride. That isn’t the first time Estelle has been pictured with Viktor: Another sweet photo shows Estelle with her parents, brother, and Viktor at the family’s summer home of Solliden on the island of Oland in southern Sweden—apparently the pony travels with them! The young princess has a fondness for ponies in general: One photo on her official biography shows her riding a pony at the Skansen open-air museum and zoo. Which is your favorite royal family pet?

Just like any other kid, Princess Estelle goes to school—although her school is reportedly the exclusive Campus Manilla in Stockholm. But, her parents walked her to school on her very first day and even posted some pics of Estelle at her desk with her classmates. This year, her back-to-school Instagram photo, taken by her mother, showed the princess leaning against a tree while wearing a blue shirt, loose hair, and big smile, with the caption, “Time for a call! Today, many children return to the school books—as does Princess Estelle, who now starts in grade 1.” Here are some other adorable photos of royals’ first days of school.

She gets into the holiday spirit

In addition to her family’s annual Christmas videos, Princess Estelle has shown her love of the holiday season by dressing up for St. Lucia’s Day, December 13. As per the Swedish tradition, a procession of girls wearing white robes, red sashes, and a crown of candles mark this celebration of light during the dark days of the winter solstice. “A small Lucia procession at Haga this morning,” captions a photo of Princess Estelle and Prince Oscar in costume for the holiday, with Estelle carrying a basket of traditional Swedish buns called lussekatter. She’s also seen in her Lucia outfit riding Viktor. You’ll want to steal these royal family traditions for yourself as well.

The Swedish royal family had a bit of a shakeup recently when King Carl Gustaf “removed” five of his seven grandchildren from the royal house. Like Prince Harry’s royal exit in Britain, this means the children won’t have to perform official royal duties, and won’t be using HRH (His/Her Royal Highness) titles or receiving any taxpayer money. Princess Madeleine, Princess Victoria’s younger sister, said in response to the news, “Chris [her husband] and I think it is good that our children now have a greater opportunity to shape their own lives in the future as individuals.” The King’s grandchildren directly in line to the throne, Princess Estelle and her brother, will remain part of the royal house. Princess Charlotte’s kids won’t get royal titles either—but Prince George’s will. 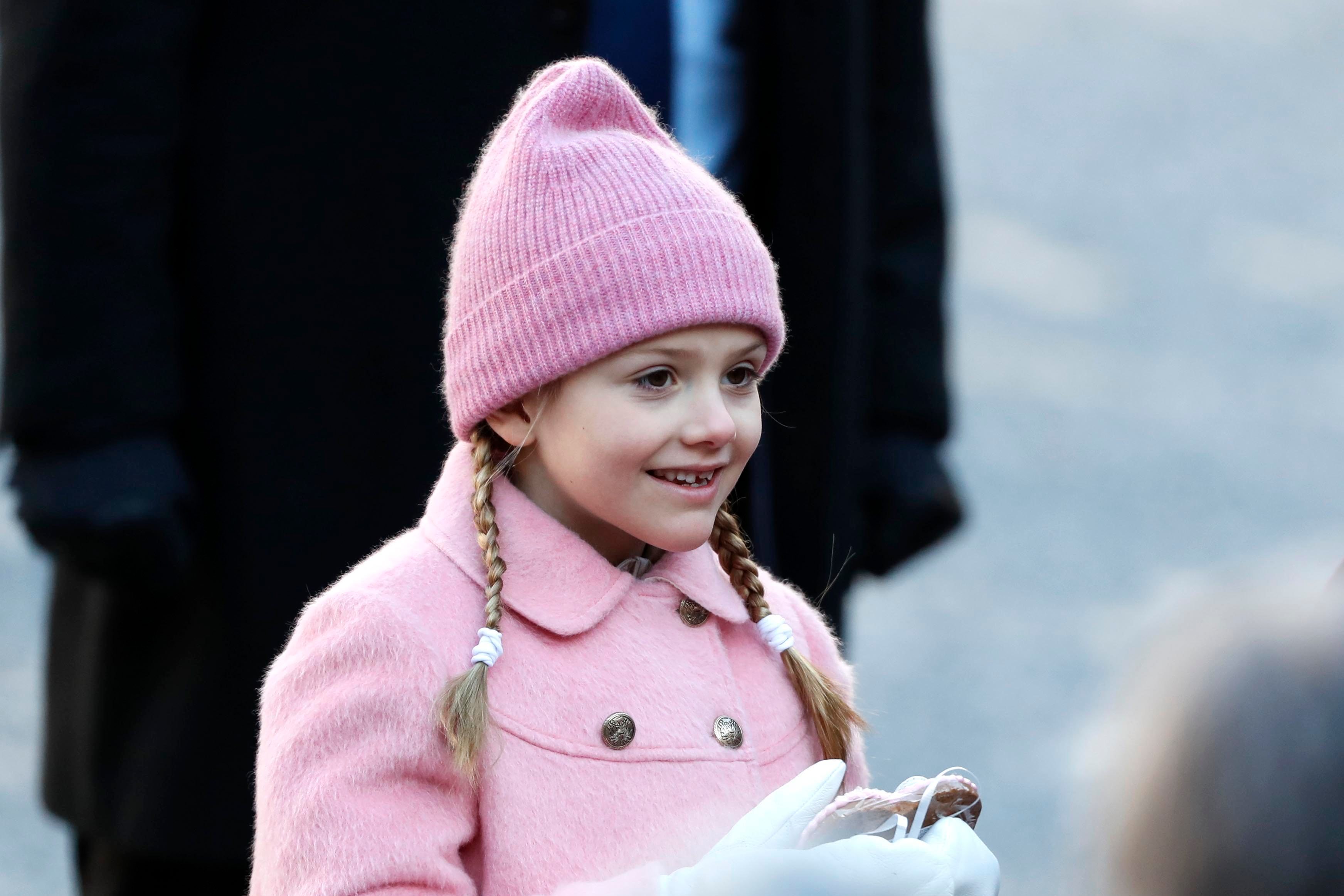 She cares about the environment

Princess Estelle did her bit for the planet by picking up litter with her mother, Princess Victoria, for Keep Sweden Tidy Day, part of World Cleanup Day. The royal duo gathered trash in Stockholm’s parks, including Djurgarden and Hagaparken, the public park around their home. Princess Estelle’s concern for the environment must also have rubbed off on her younger brother: During a recent bike ride in the park captured on video by his mother, Prince Oscar raised the alarm about a piece of garbage, shouting, “Plastic in nature! Plastic in nature!” and calling his dad to come pick it up. Good job to both the Prince and Princess! Now, take a look at these other young future kings and queens from countries around the world.