Get a unique look at everyone from Hollywood stars to British royals with these rarely seen photos from throughout the 20th century.

In this photo, the Titanic‘s “Collapsible D” lifeboat approaches the RMS Carpathia, another transatlantic passenger ship. “Collapsible D” was the last lifeboat to be lowered from the port side of the Titanic during the 1912 disaster. Packed with anywhere from 15 to 25 people (historians can only estimate how many people made it aboard), the small boat is towed toward the Carpathia with the help of another lifeboat. How’s this for a disturbing historical coincidence: Six years after aiding Titanic survivors, the Carpathia would also sink after being struck by a German U-boat. Learn some more eerie historical facts you didn’t find out in history class.

Ever the outdoorsman, President Roosevelt leaps over a fence on horseback in this 1907 photo. The 26th president frequented the Chevy Chase Club in Washington, D.C., which is where B.F. Clinedinst snapped this picture.

Harry Houdini, possibly the most famous magician who ever lived, prepares for one of his many death-defying tricks in this rarely seen shot from April 30, 1908. For this specific trick, Houdini dove 30 feet into the Charles River while collared and handcuffed. He surfaced, with the chains in his hands, a mere 40 seconds after diving, to the amazement and relief of 20,000 spectators. Even the mayors of Boston and Cambridge came out to watch.

In this photo dating back to around 1912, the celebrated orator and activist Booker T. Washington delivers an address. This shot, captured in Mound Bayou, Mississippi, was taken by Washington’s personal photographer, Arthur P. Bedou. Like Washington, he was African-American and sought to end the disenfranchisement of black Americans in the post-Reconstruction nation. For another fascinating journey through history, get a look at these photos showing what 14 everyday objects looked like 100 years ago.

Here, a roomful of women is hard at work sewing American flags, which had only 48 stars at the time—somewhere between 1916 and 1920. While much of the male workforce was overseas fighting in World War I, women stepped up, volunteering to help make flags at the Brooklyn Navy Yard.

During his presidential campaign, Republican party nominee and soon-to-be 29th President of the United States Warren G. Harding takes a break from showcasing his political prowess to demonstrate his talent with a sousaphone! Harding, who was elected to the office in 1920, ran a “front porch” presidential campaign, mostly staying local and encouraging his supporters to come see him speak. (And play!) Check out some more fascinating little-known talents of U.S. presidents.

Four years after women won the right to vote, the National League of Women Voters gathered on September 17, 1924, to encourage and empower their fellow women to do just that. The election of 1924 was the second one women could legally vote in, and millions did. Check out some of the most inspiring famous female firsts throughout history.

Check out this incredible behind-the-scenes look at the construction of one of America’s most iconic monuments. This shot, taken sometime around 1932, puts the massive size of the mountain’s presidential likenesses in perspective. Check out these stunning photos of what the world’s most famous landmarks look like zoomed out. 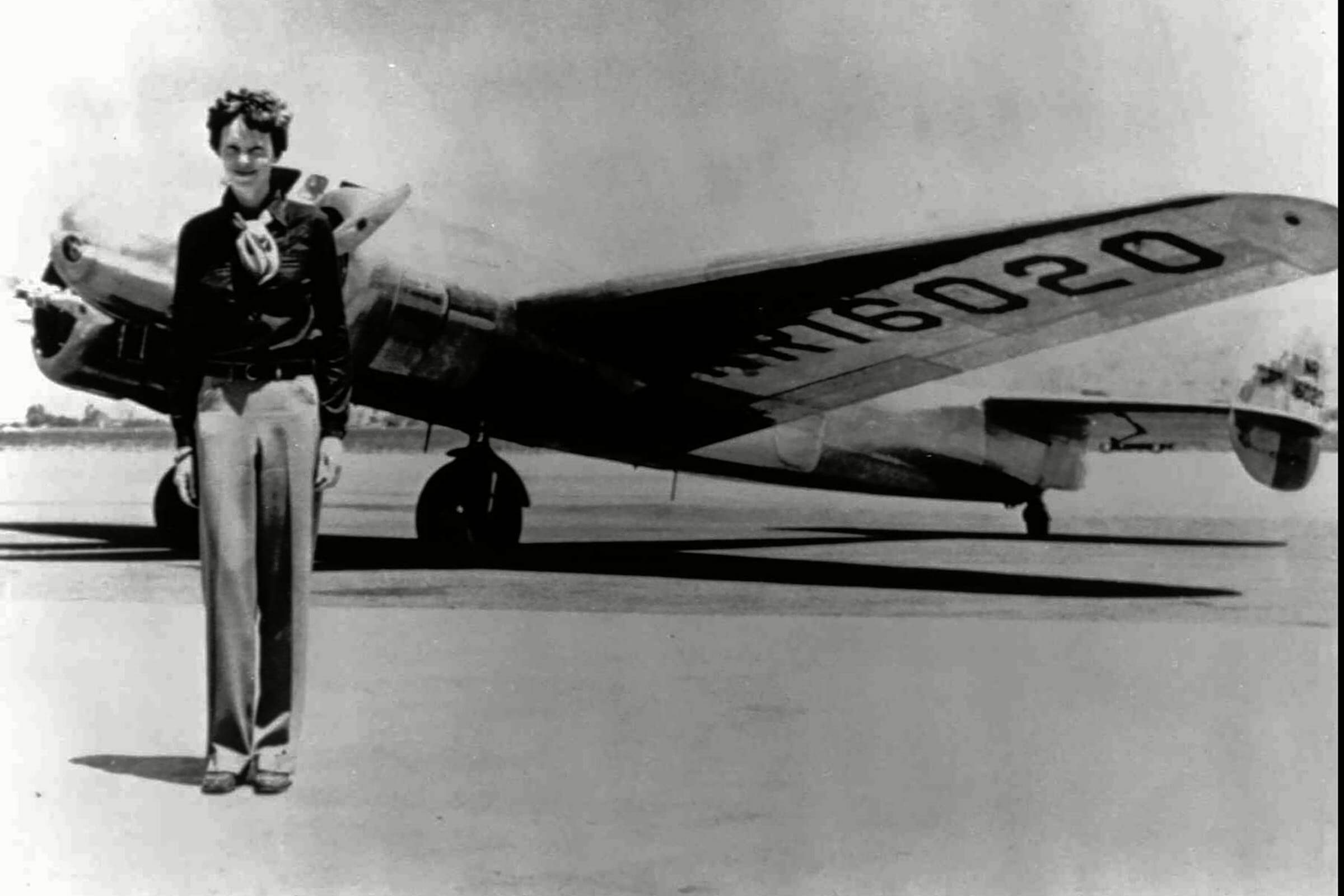 America’s favorite lady pilot prepares to take off for the first leg of her planned flight around the world—Oakland, California to Honolulu, Hawaii. She stands in front of her chosen aircraft: The Lockheed Electra 10E, which had been built specifically for her. She would depart shortly after this photo was taken, on March 17, 1937. The flight would be called off, however, when the Electra was damaged during Earhart’s takeoff from Hawaii.

The young starlet, who is around nine or ten years old in this photo, takes on the role of a cowgirl as part of a Western show. Her cowboy companion is Montie Montana, a famous rodeo trick rider and stuntman. The two prepare to take the stage at the Desert Inn in Palm Springs, California in this rarely-seen photo dating back to around 1938.

In this 1939 photo, King George VI and Queen Elizabeth, the parents of the current British monarch, take a walk on the grounds of Windsor Castle. But they’re not just on a leisurely stroll; they’re reviewing a troop of British Scouts before a St. George’s Day celebration. St. George is the patron saint of the Scouting movement, and April 23 marks his feast day. In 1939, the royals celebrated by inviting the Scouts to Windsor’s Chapel of St. George. Get a look at some more candid photos of the royal family, past and present.

Satchmo and the Duke

Two legends make music together in this photo from 1946. Duke Ellington plays the piano while Louis Armstrong trumpets away. The two rehearse the piece “Long, Long Journey” by Leonard Feather in New York City’s RCA Victor recording studio. This was the first time in history that the two jazz greats collaborated on a recording.

The second baseman of the Brooklyn Dodgers, Jackie Robinson, trades his baseball bat for a tennis racket in this rarely seen photo from 1951. Robinson was an attendee of a celebrity tennis tournament, held to raise money for the American National Theater and Academy. Tennis pro Althea Gibson, who would become the first black athlete to win a Grand Slam title in 1956, gives Robinson some pointers.

The star celebrates making her Broadway debut in Gigi by completing her own name on the theater’s marquee in this charming shot from 1951.

This 1960 photo captures President Dwight D. Eisenhower as he gives a TV-radio address to the American people. He’d just returned from a trip to South America, which he’d spent visiting Uruguay, Brazil, Chile, and Argentina. Eisenhower, who became president in 1953, was the first Commander-in-Chief to be president of all 50 states. Check out some more photos that capture candid moments of U.S. presidents. 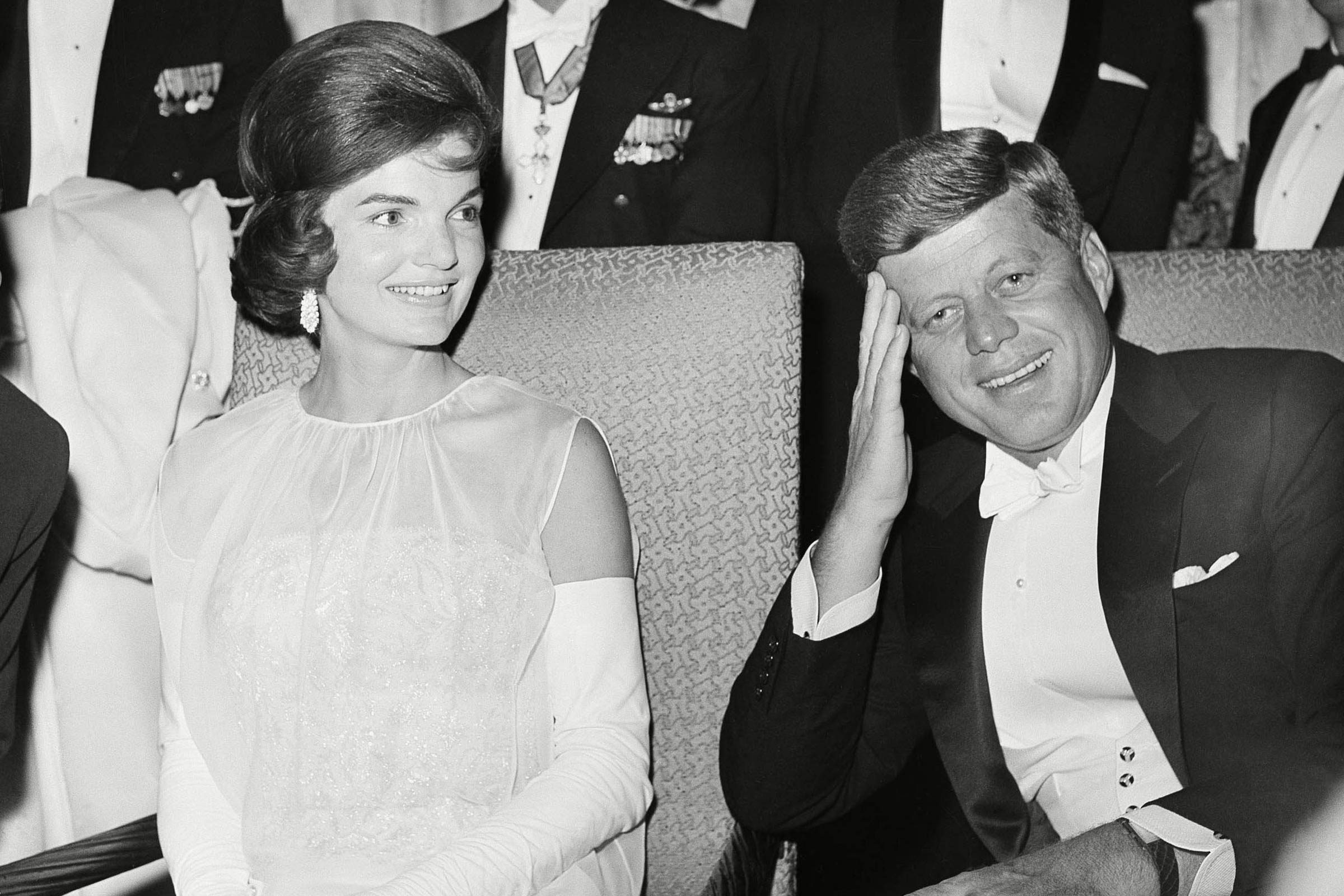 Newly inaugurated President John F. Kennedy and First Lady Jackie Kennedy enjoy a rare moment of downtime during the inaugural ball, held in their honor on January 20, 1961. Jackie Kennedy helped design her gorgeous white dress herself, working with the head of Bergdorf Goodman’s custom salon. Get a look at some more rarely seen photos of Jacqueline Kennedy Onassis.

These candid photos of the 35th president formed part of a 2003 exhibit at Dallas’ Sixth Floor Museum. These photos aren’t rare simply because they capture John F. Kennedy during a more relaxed moment in his presidency; they’re the last remnants of the Lowe collection. Jacques Lowe was the personal photographer for JFK and his family, and he took over 40,000 photos of them, starting two years before Kennedy took office. Sadly, most of the negatives were kept in a safe in the World Trade Center and were lost during 9/11. But Lowe’s daughter helped track down some contact sheets that had been stored elsewhere, and a team of imaging specialists worked tirelessly to restore them so that people could see Lowe’s work for years to come. These before-and-after photos reveal how recent presidents have aged in office.

Thirty-five-year-old Julie Andrews dazzles in a sequined gown as she attends the premiere of her 1970 film Darling Lili. She starred alongside Rock Hudson in the World War I-set musical romance.

Another first for Neil

Neil Armstrong becomes the first-ever recipient of the Congressional Space Medal of Honor in this 1978 photo. During this ceremony, President Jimmy Carter (right) bestowed the brand-new award upon Armstrong and five other space pioneers, including John Glenn and Alan Shepard. The ceremony took place on October 1, 1978, and since then, 22 other astronauts have received the medal. Here are some more inspiring, funny, and just plain odd historic firsts you probably didn’t know about.

During President Ronald Reagan’s visit to Windsor Castle in 1982, he and the then-56-year-old Queen Elizabeth II rode horses around Home Park in Windsor. According to The Telegraph, the diplomatic visit, which lasted a mere 48 hours, created nearly 500 pages’ worth of British diplomatic files.

Members of the British royal family watch the Royal Air Force fly overhead as part of the annual Trooping of the Colour, a ceremony that honors the birthday of the Sovereign, in 1991. Standing on the balcony of Buckingham Palace, you can see Princess Diana, dressed in an elegant ensemble of canary yellow and navy blue. To her right is the Duchess of York, Sarah Ferguson. You can also spot a young Prince Harry, ever the gentleman in his suit and red tie. The little girl in red, standing in the center, is Leonora Knatchbull, daughter of Lord Ramsey, who was sadly battling cancer at the time. The royal family let her stand on the balcony as the ceremony’s guest of honor… though she doesn’t seem to be enjoying herself very much! Here are some more amazing, rarely seen photos of Princess Diana.