Here is a look back at some of the moments that made up the life of this great woman, who served not only as Supreme Court Justice but also wife, mother, grandmother, academic, trailblazer, champion of civil liberties, and inspiration to many. 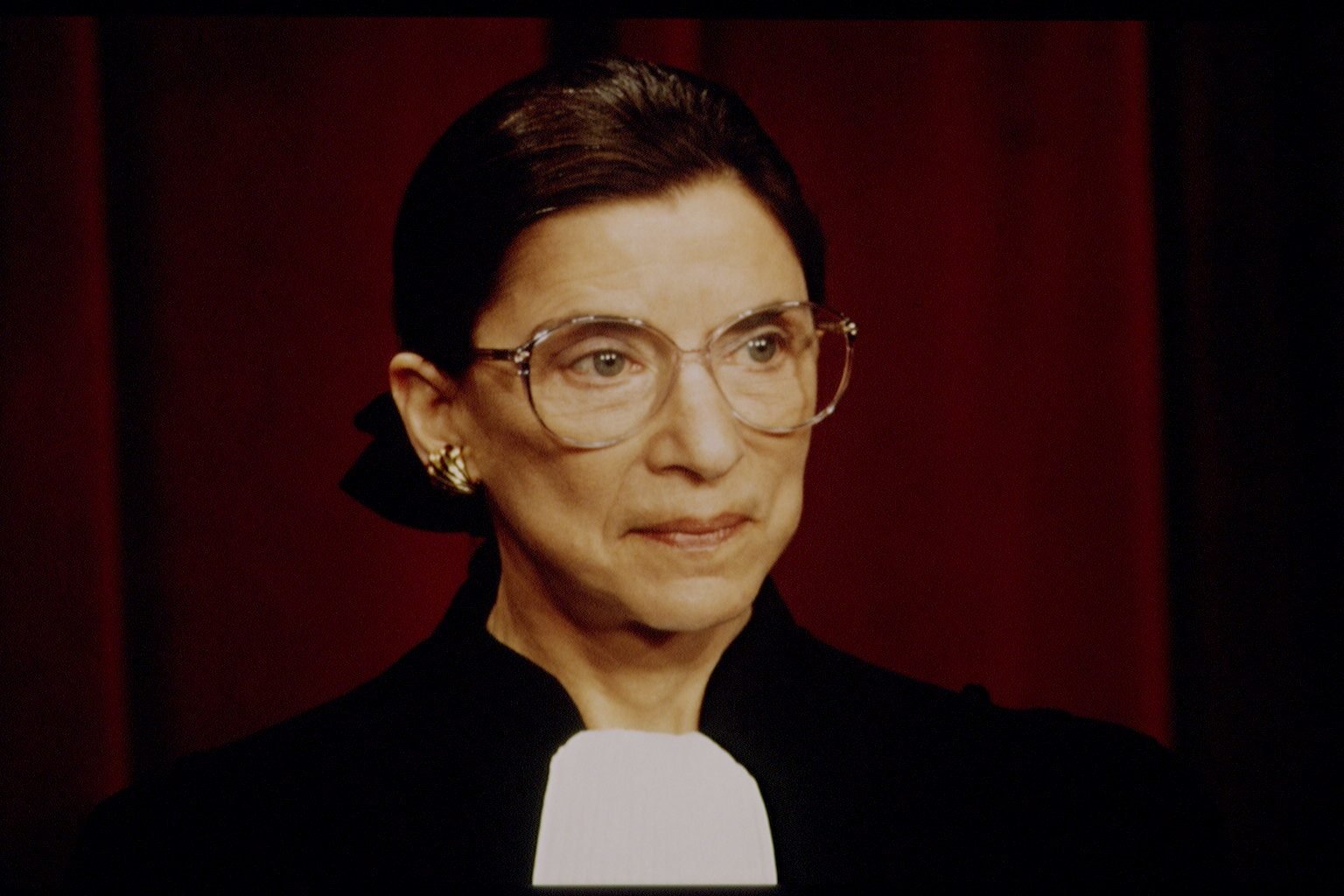 Ruth Bader Ginsburg, born Joan Ruth Bader in Brooklyn, New York in 1933, was the 107th Justice appointed to the United States Supreme Court, as well as the Supreme Court’s second female and first Jewish female jurist. Her death on September 18, at age 87, came after five bouts with cancer over the course of her life.

When diagnosed with pancreatic cancer in 2009, her fighting mantra became “I will live,” which was inspired by her friendship with opera singer Marilyn Horne, not to mention her love of opera in general. To the relief of her supporters on both sides of the political aisle, Ginsburg was true to her word, living for another 11 years during which she continued interpreting the laws of the United States and the U.S. Constitution (here is why Supreme Court Justices serve for life). Her audacious and often scathing written dissents to the highest Court’s official decisions earned her the moniker, “Notorious R.B.G.” while laying her own hopeful groundwork for future reform. 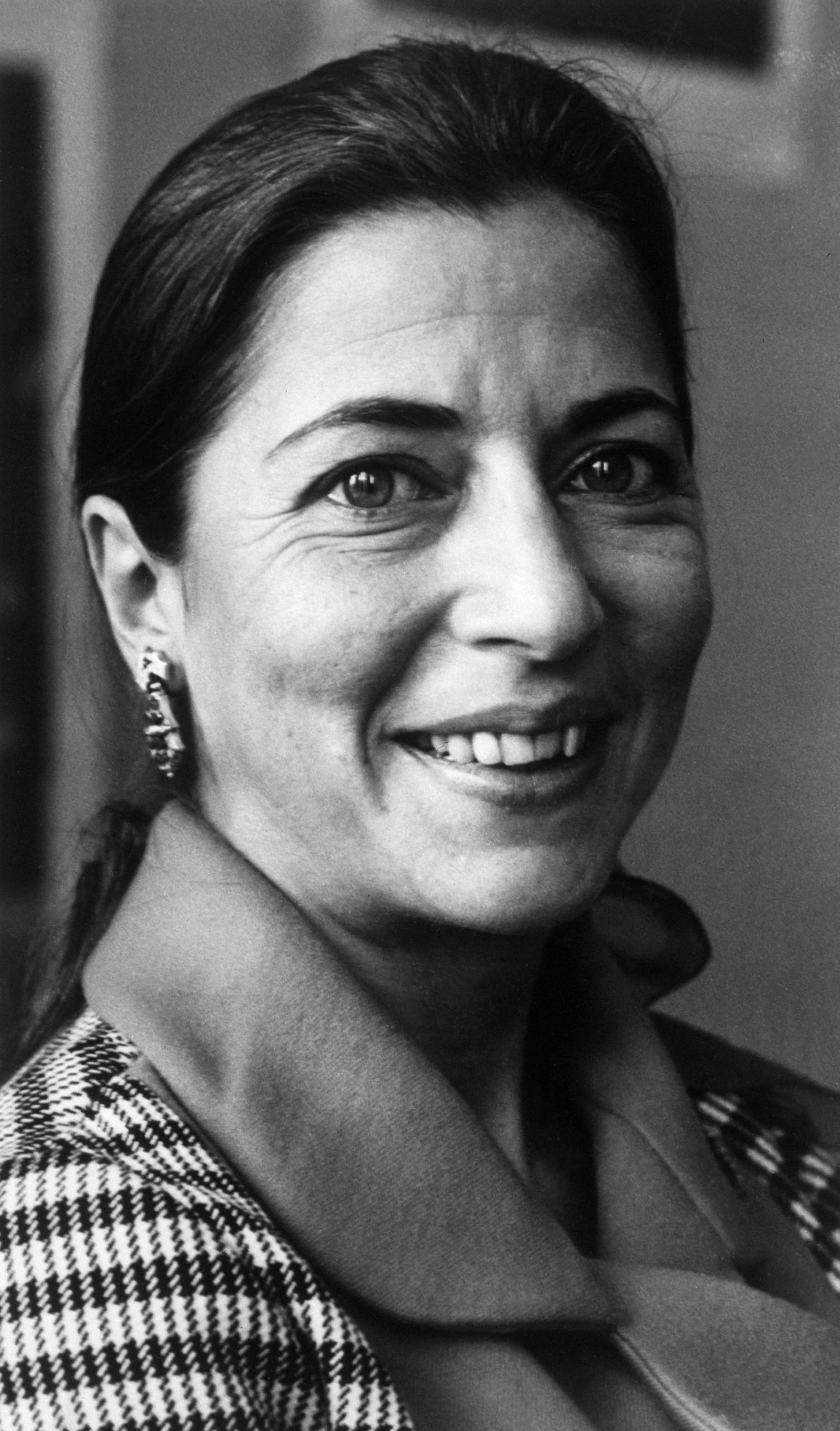 A woman ahead of her time

At the time this photo was taken in 1977, Ruth Bader Ginsberg was a 44-year-old wife and mother of two who had already successfully argued against gender discrimination before the U.S. Supreme Court in 1971’s Reed v. Reed. Ginsburg was no stranger to gender discrimination in her own life, having been one of only nine women admitted to her starting class of 500 at Harvard Law School, where the Dean demanded to know how those nine women could justify taking the place of a man. Despite graduating at the top of her class at Columbia Law School (where she transferred after her husband, Martin Ginsburg, took a job in New York City), she couldn’t secure a job at any New York City law firm because she was, in her words, Jewish, a woman, and a mother. Unable to work in private practice, Ginsburg took jobs in academia before becoming a litigator, and then a Director for the American Civil Liberties Union (ACLU).

Unfortunately, gender discrimination still exists. Here are 16 ways we can see that playing out as against women. 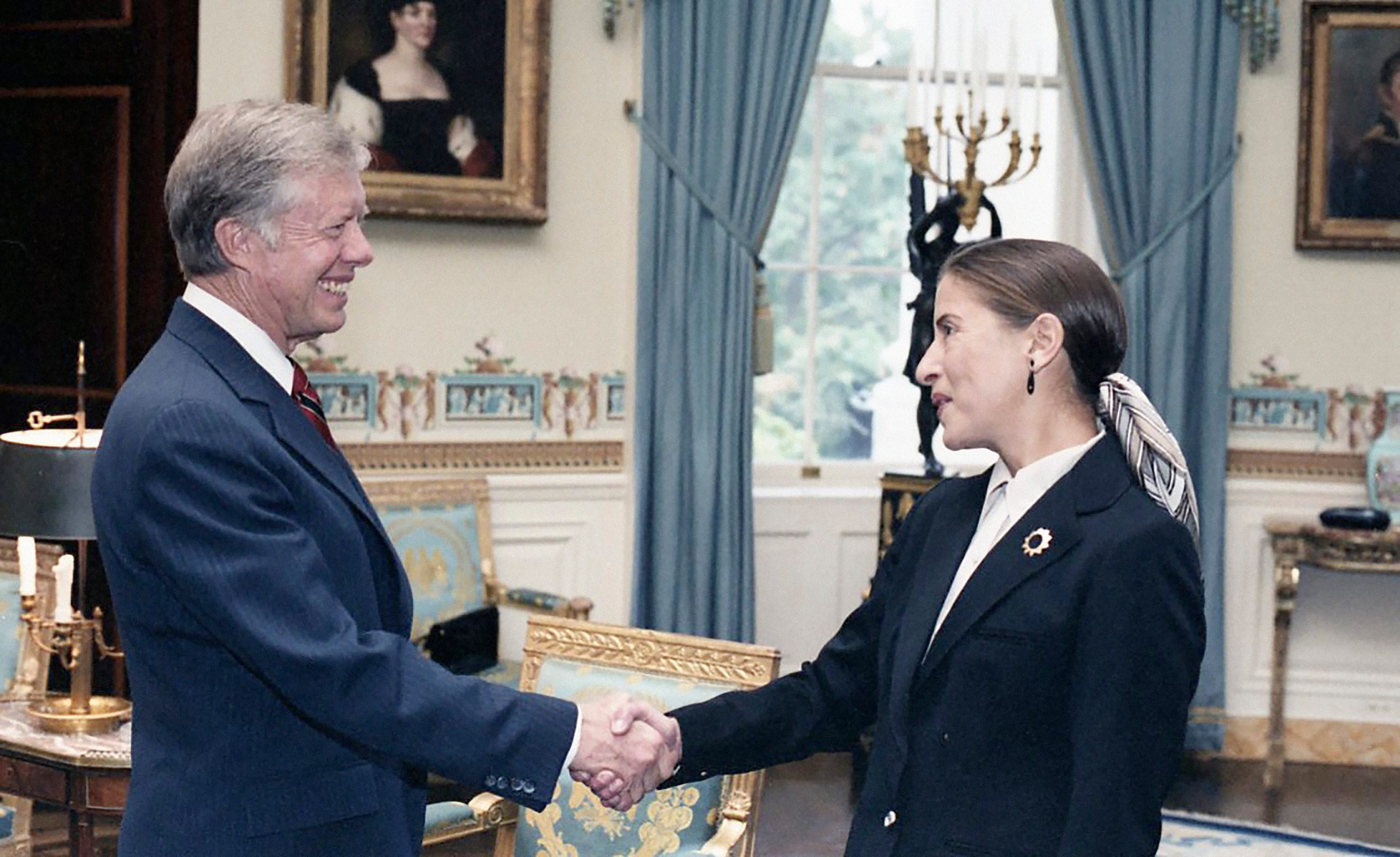 Ginsburg served as the ACLU’s General Counsel and on the Board of Directors until 1980, which is when President Jimmy Carter appointed Ginsburg to the United States Court of Appeals for the District of Columbia Circuit. Check out these bits of presidential trivia you never knew. 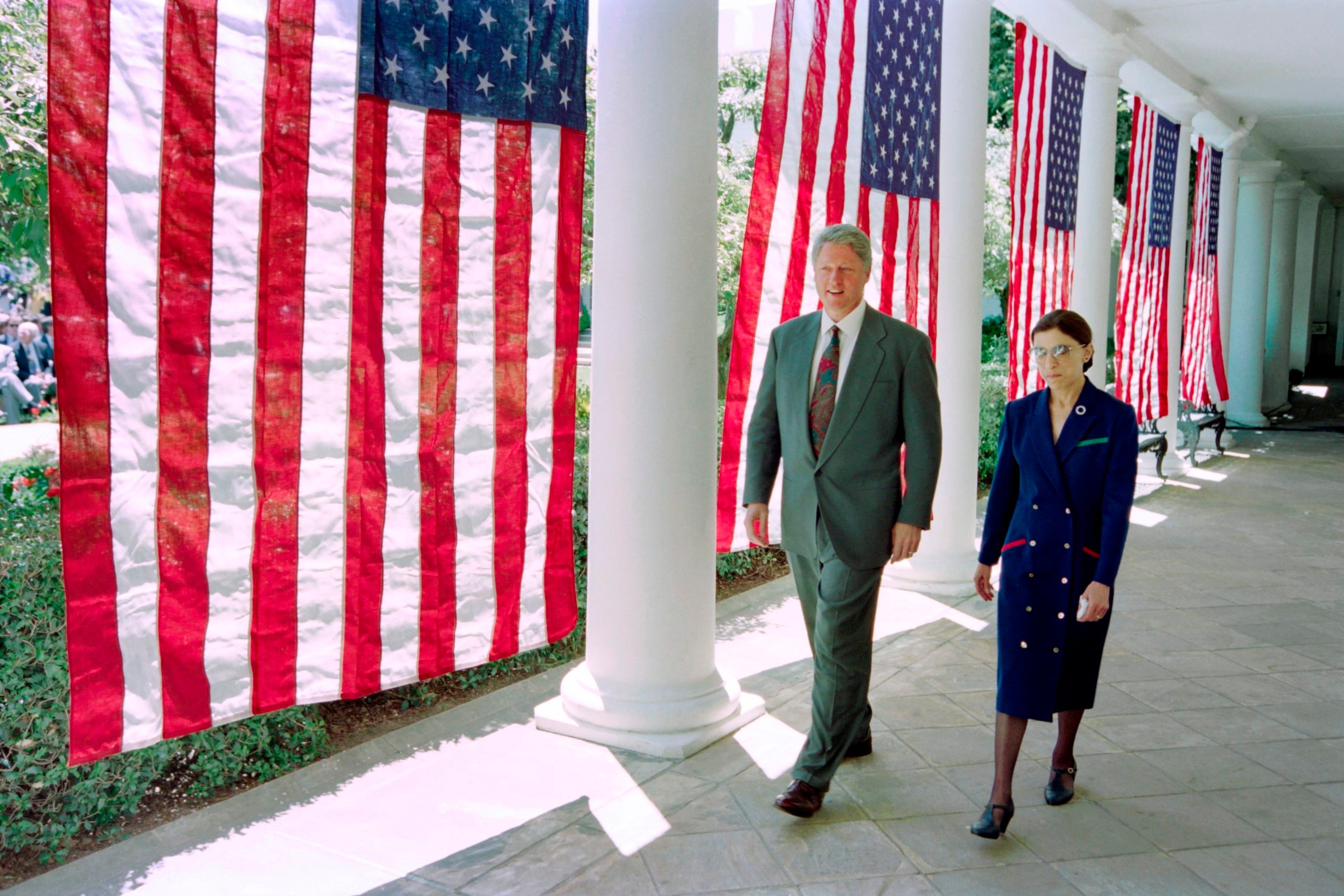 Ginsburg served as federal appeals justice until 1993 when President Bill Clinton nominated her to the U.S. Supreme Court to fill the seat left vacant by Associate Justice Byron White, who retired. Here, the two walk together toward the press conference where President Clinton introduced his nominee to the world.

Clinton officials have stated that Ginsburg’s name began appearing on a shortlist of potential nominees as a result of the tireless lobbying of her husband, whom she called “Marty.” Although Marty Ginsburg was a legal tour de force in his own right (the Harvard Law School graduate became a tax lawyer in New York City and went on to, among other things, become a Georgetown Law professor), he shared childcare and housework duties with his wife and reportedly told a friend that the most important thing he did in his life was to “enable Ruth to do what she has done.” Here are 15 ways Ruth Bader Ginsburg made history. 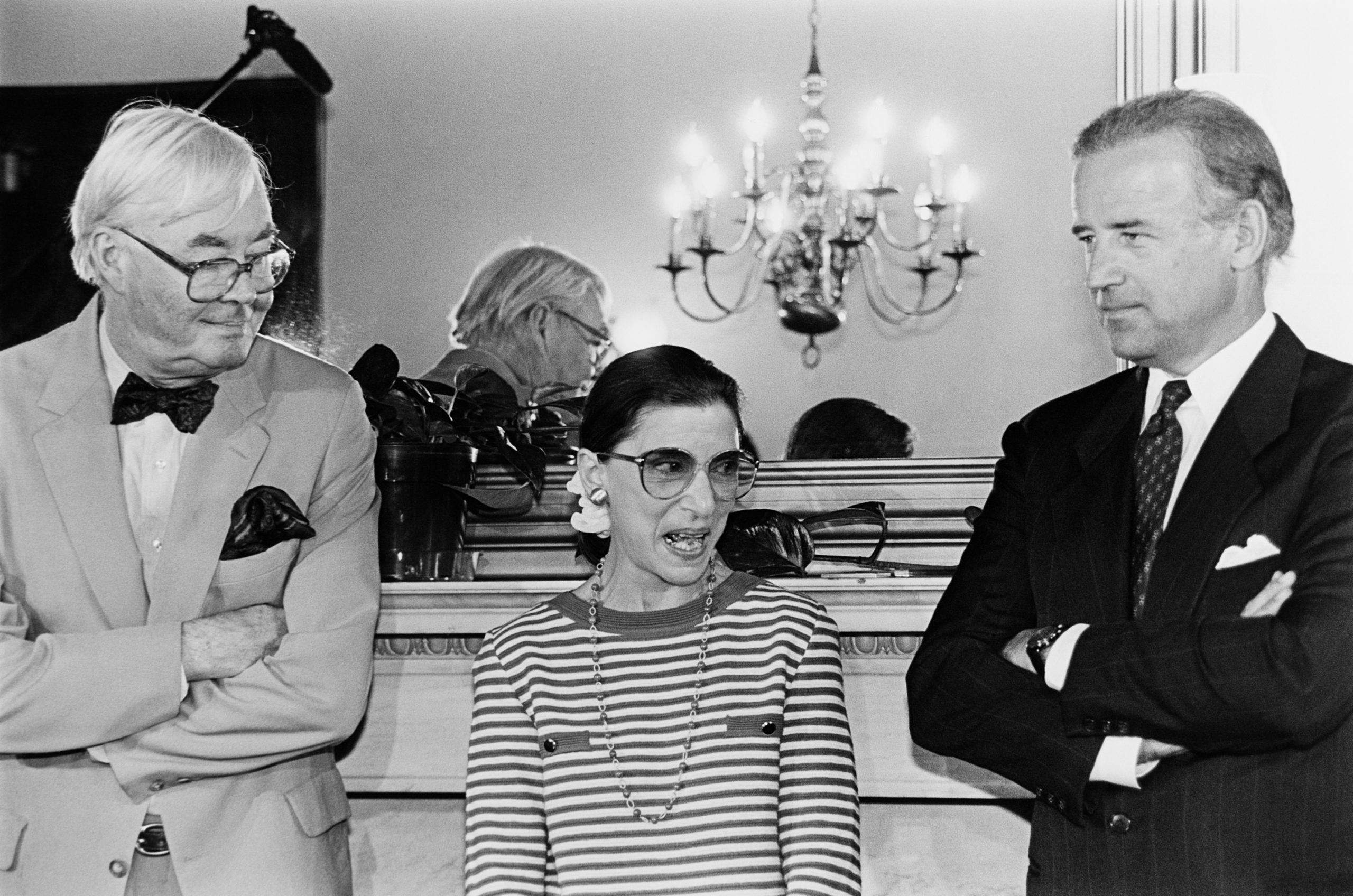 Pictured in the office of Senator Joe Biden (D-Delaware) with Senator Daniel Patrick Moynihan (D-New York) in June 1993, Ginsburg makes the rounds as Clinton’s nominee to fill Justice White’s seat. The Senate confirmed her by a vote of 96 to 3. Here are 13 things you didn’t know about the vice presidency. 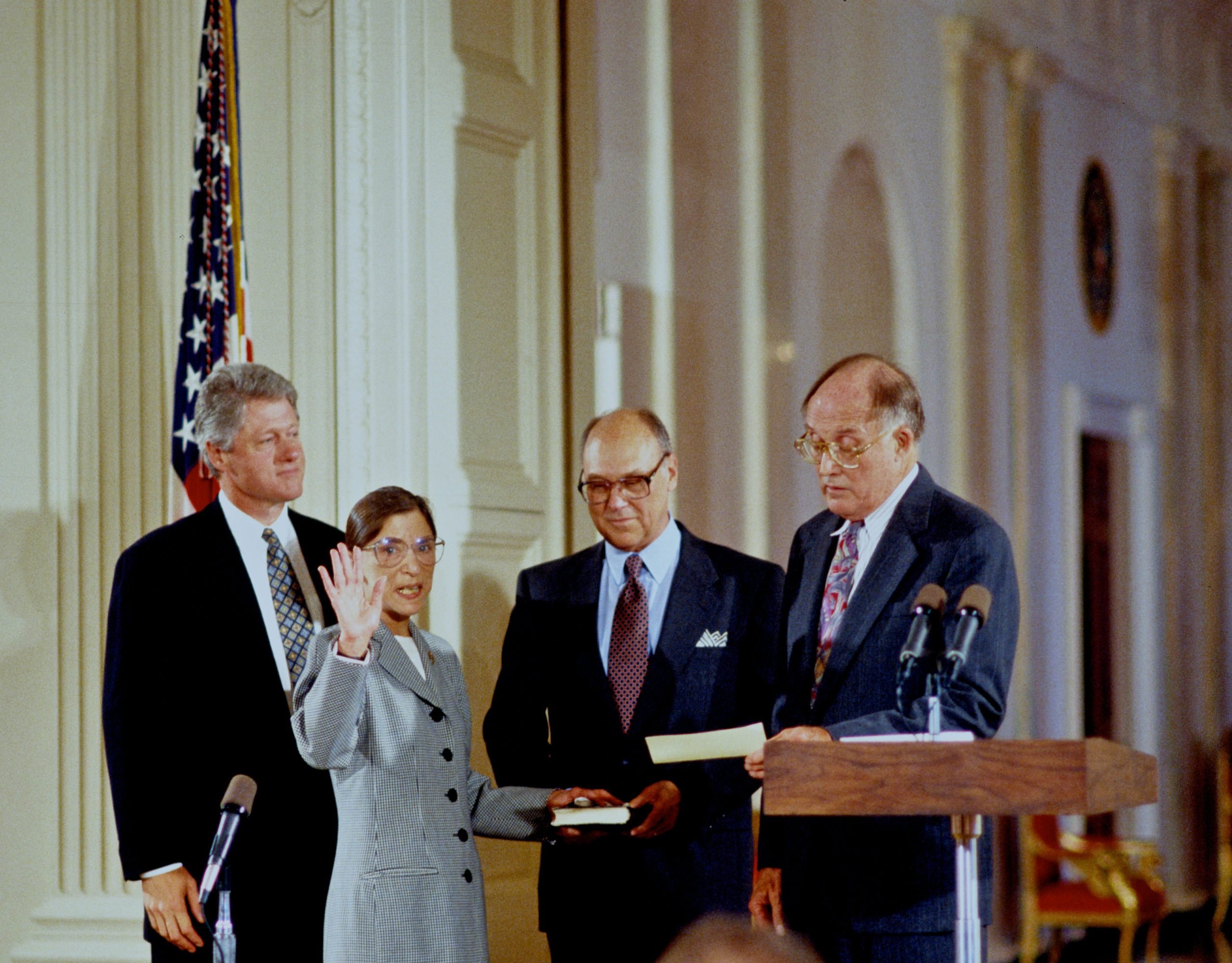 In this photo, taken August 10, 1993, Ginsburg is sworn in as Associate Justice of the Supreme Court, with President Clinton behind her, and her husband Marty holding the bible as then-Chief Justice William H. Rehnquist administered the Oath of Office. After her confirmation, Ginsburg commended her husband for having been, since their teenage years, her “best friend and biggest booster.” Ruth and Marty met as undergraduates at Cornell University in the early 1950s and married soon after Ruth graduated from college in 1954. Learn why the Supreme Court has nine members. 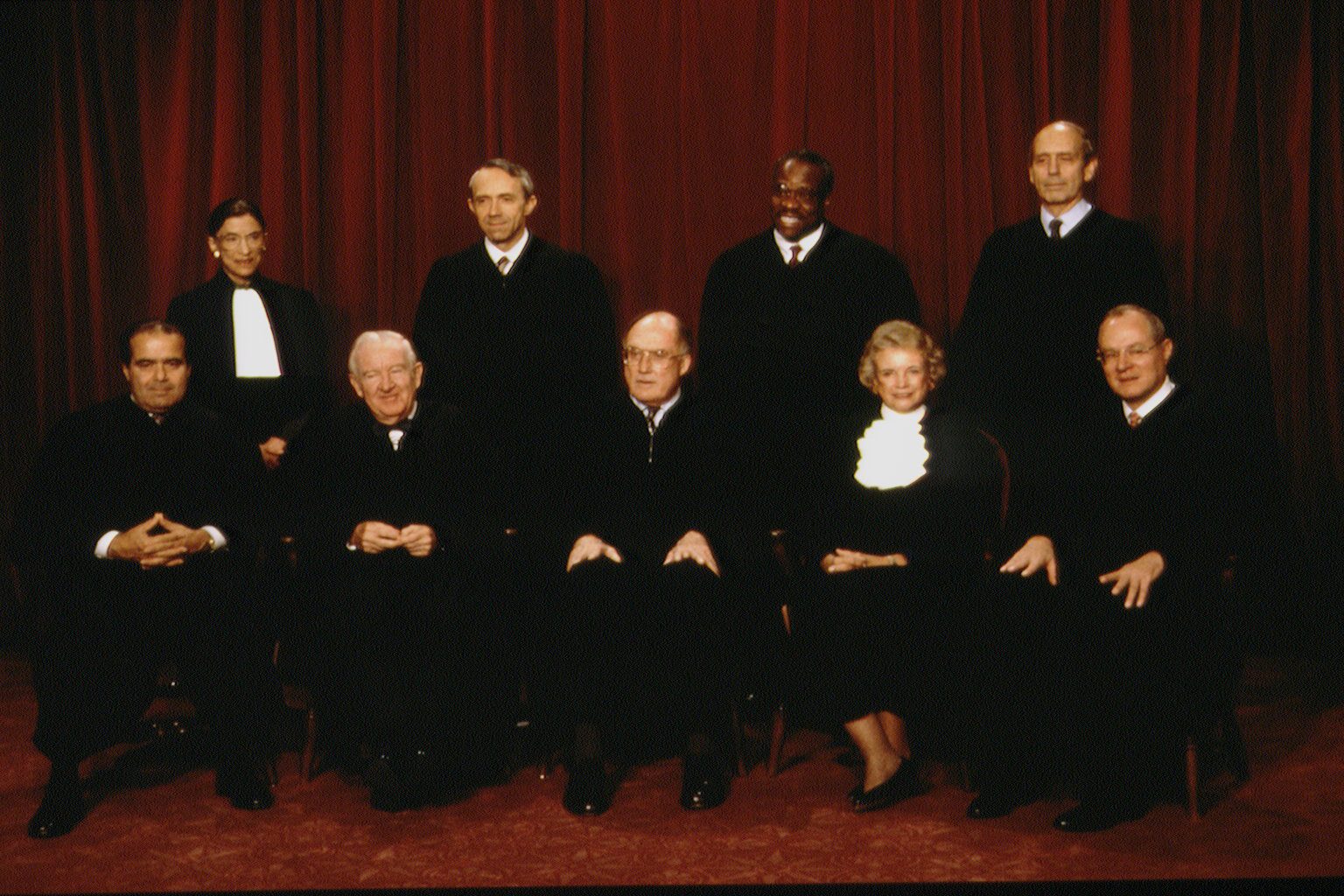 On November 10, 1993, the nine Supreme Court Justices (left to right: Antonin Scalia, Ruth Bader Ginsburg, John Paul Stevens, David Souter, William H. Rehnquist, Clarence Thomas, Sandra Day O’Connor, Stephen Breyer, and Anthony Kennedy) had their official portrait taken. It was the first time in history that the Supreme Court had two female justices. The first was Sandra Day O’Connor, who was appointed by President Ronald Reagan in 1981 and served until her retirement in 2006. 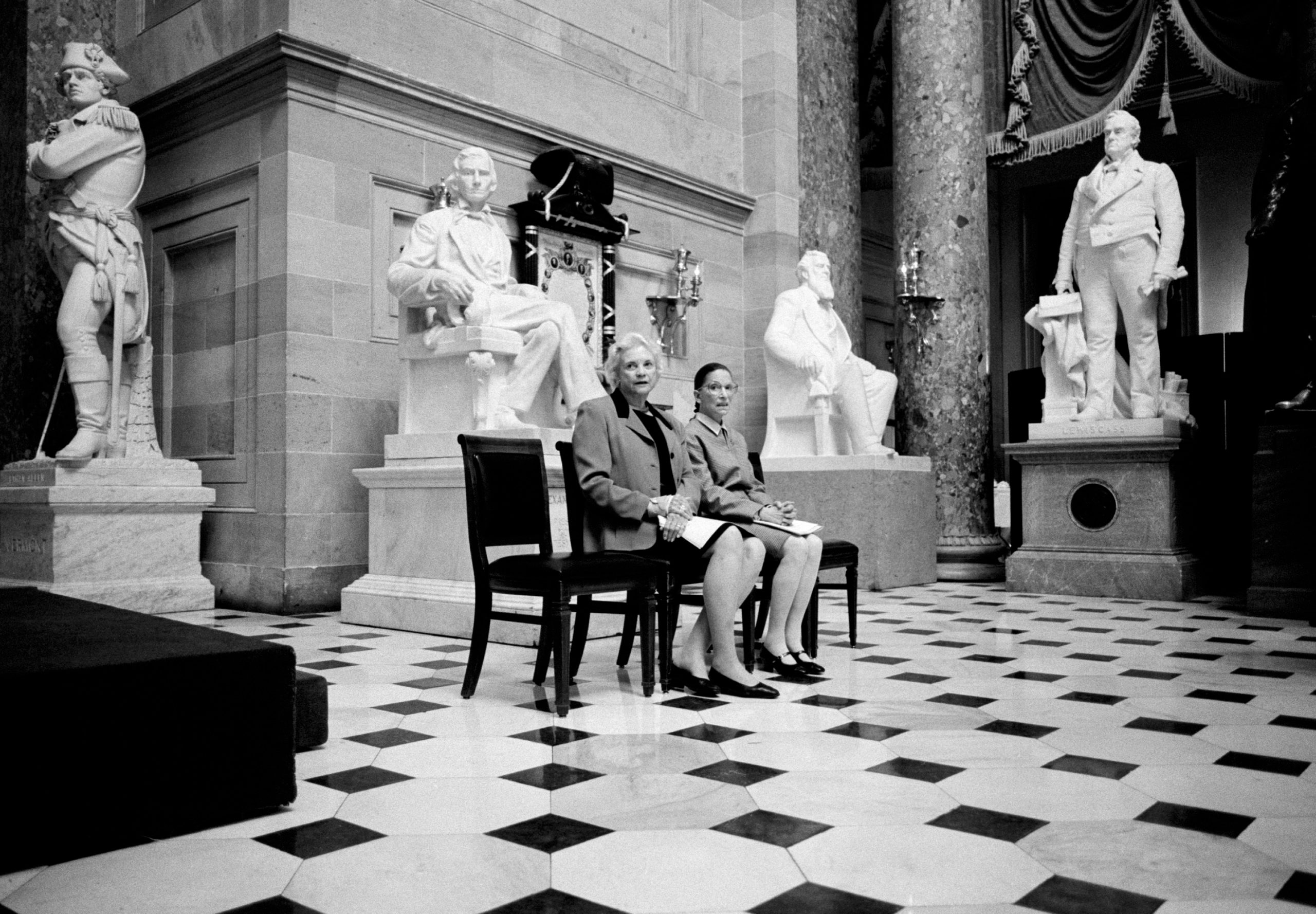 In 2001, Justices O’Connor and Ginsburg posed for this portrait in Statuary Hall in the U.S. Capitol Building in Washington, D.C., surrounded by statues of men. Don’t miss these trailblazing women who made history. 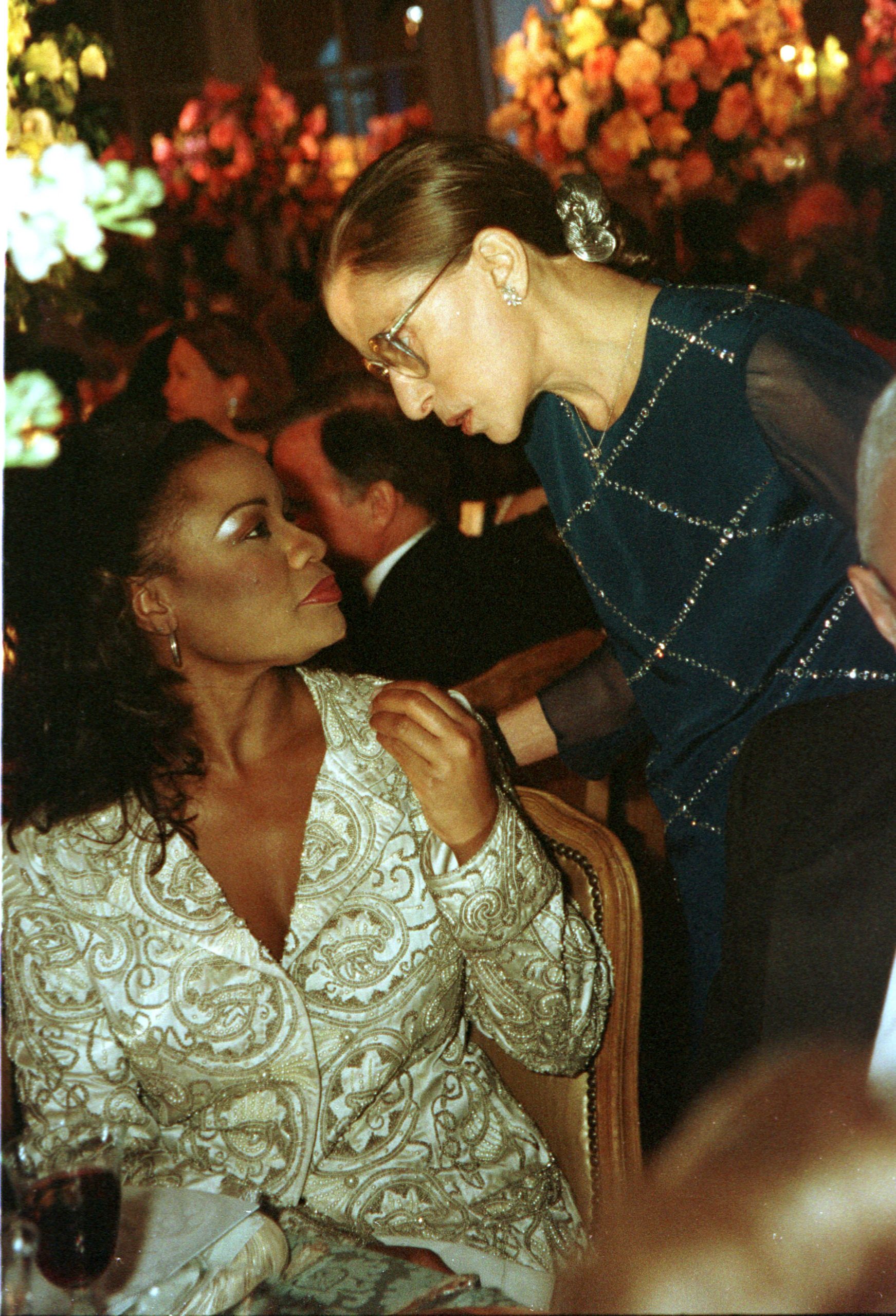 Getting her star on at the opera

Ruth Bader Ginsburg was a devoted fan of the opera. Here she’s pictured with opera singer and star Denyce Graves at a gala following the opening night of Washington (D.C.) Opera’s 2000 season.

Ginsburg didn’t leave our world without something to say—find out what her last words were, along with 17 other iconic people. 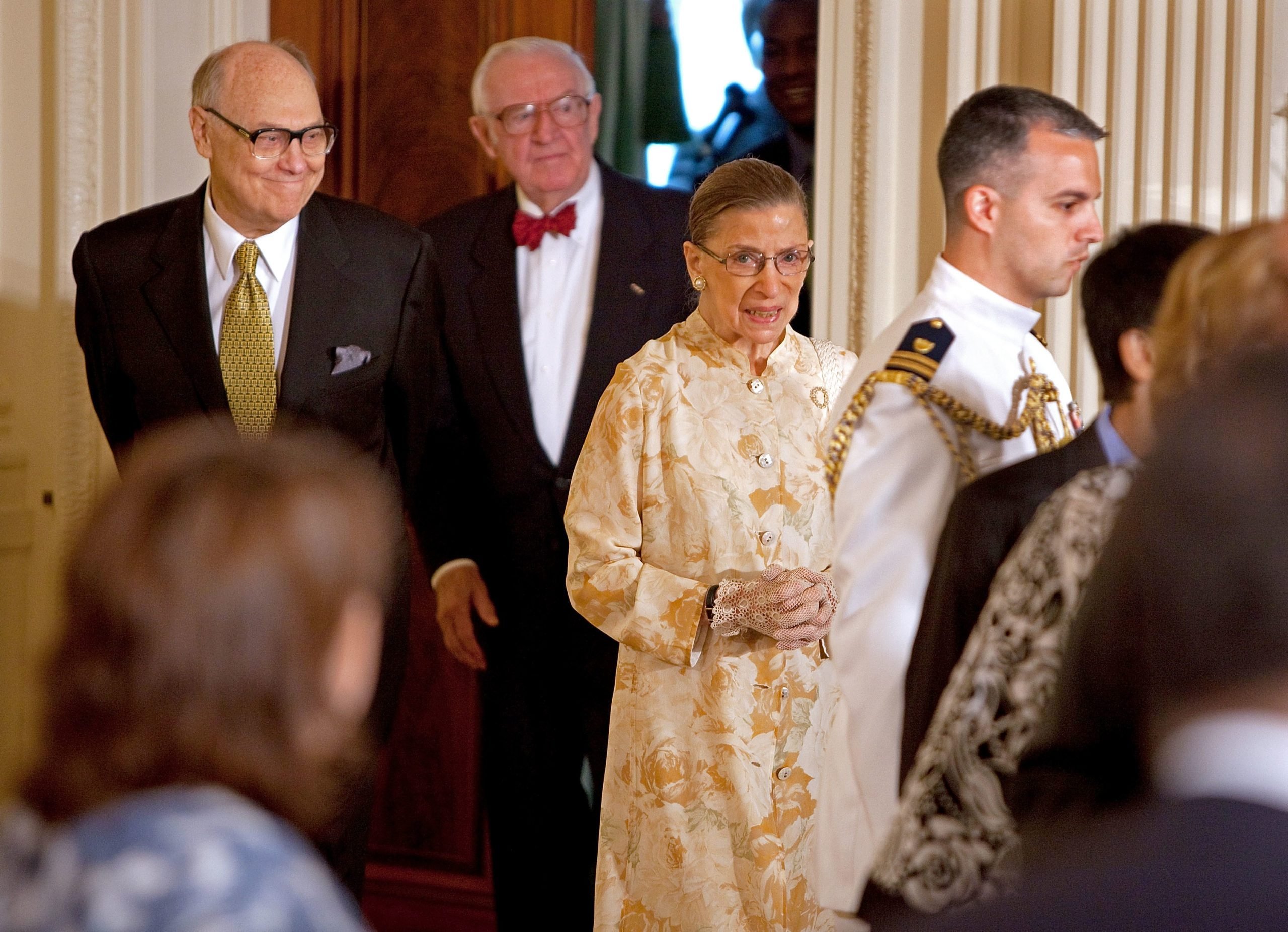 The look of love

At the reception for newly sworn-in Supreme Court Associate Justice Sonia Sotomayor (appointed by President Barack Obama in 2009), we see Marty Ginsburg gazing lovingly at his wife, Ruth, who is standing in front of Associate Justice John Paul Stevens. “Meeting Marty was by far the most fortunate thing that ever happened to me,” Ginsburg is quoted by the BBC as having said. “[He] was the first boy I ever knew who cared that I had a brain.” 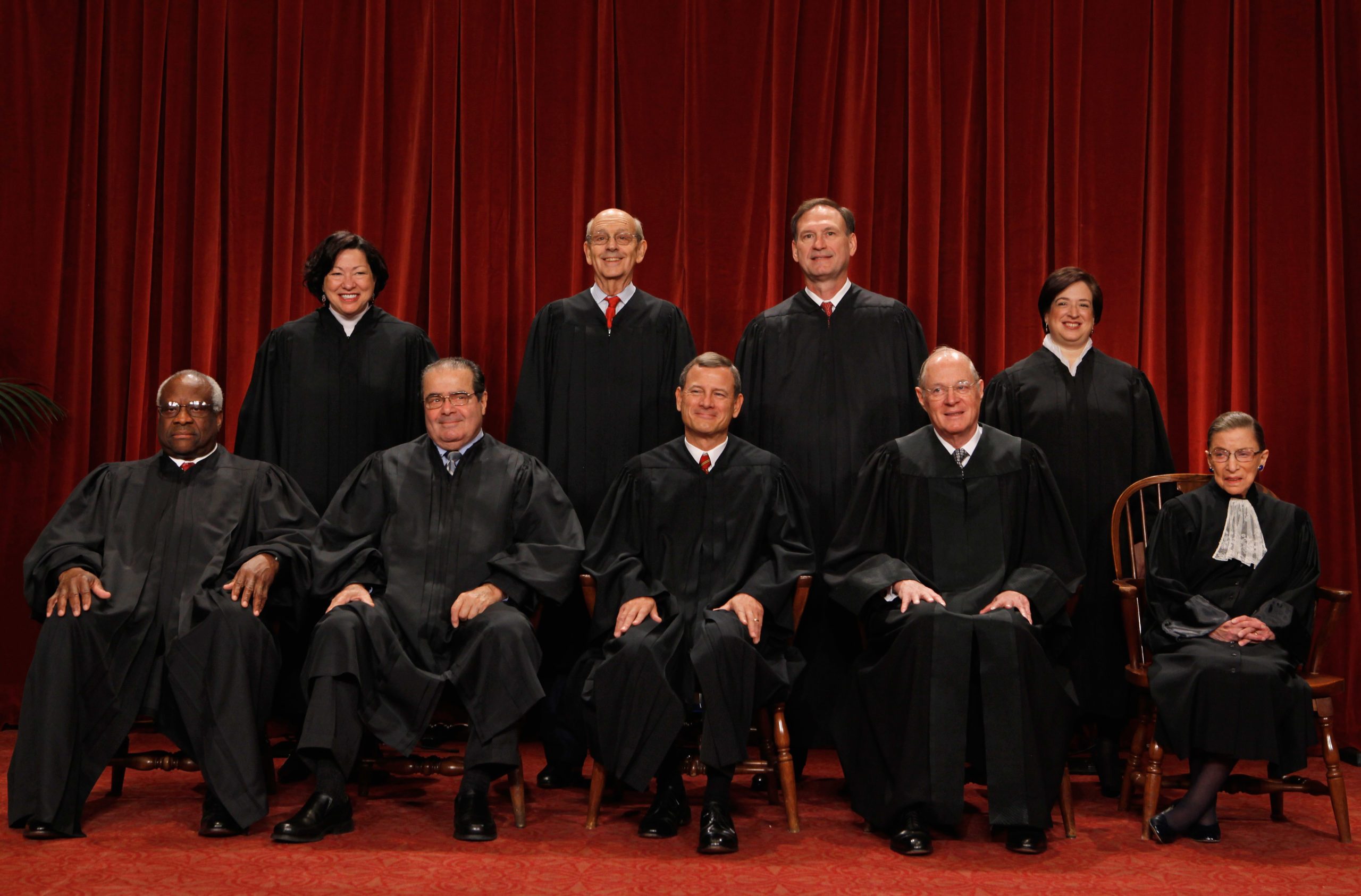 Three women on the Supreme Court for the first time ever

In this 2010 photo, for the first time ever, we see Ruth Bader Ginsburg in a photograph where two of her fellow justices on the Supreme Court are also female. The third, also appointed by President Barack Obama, is Associate Justice Elena Kagan. Don’t miss these 15 moments that changed women’s history forever. 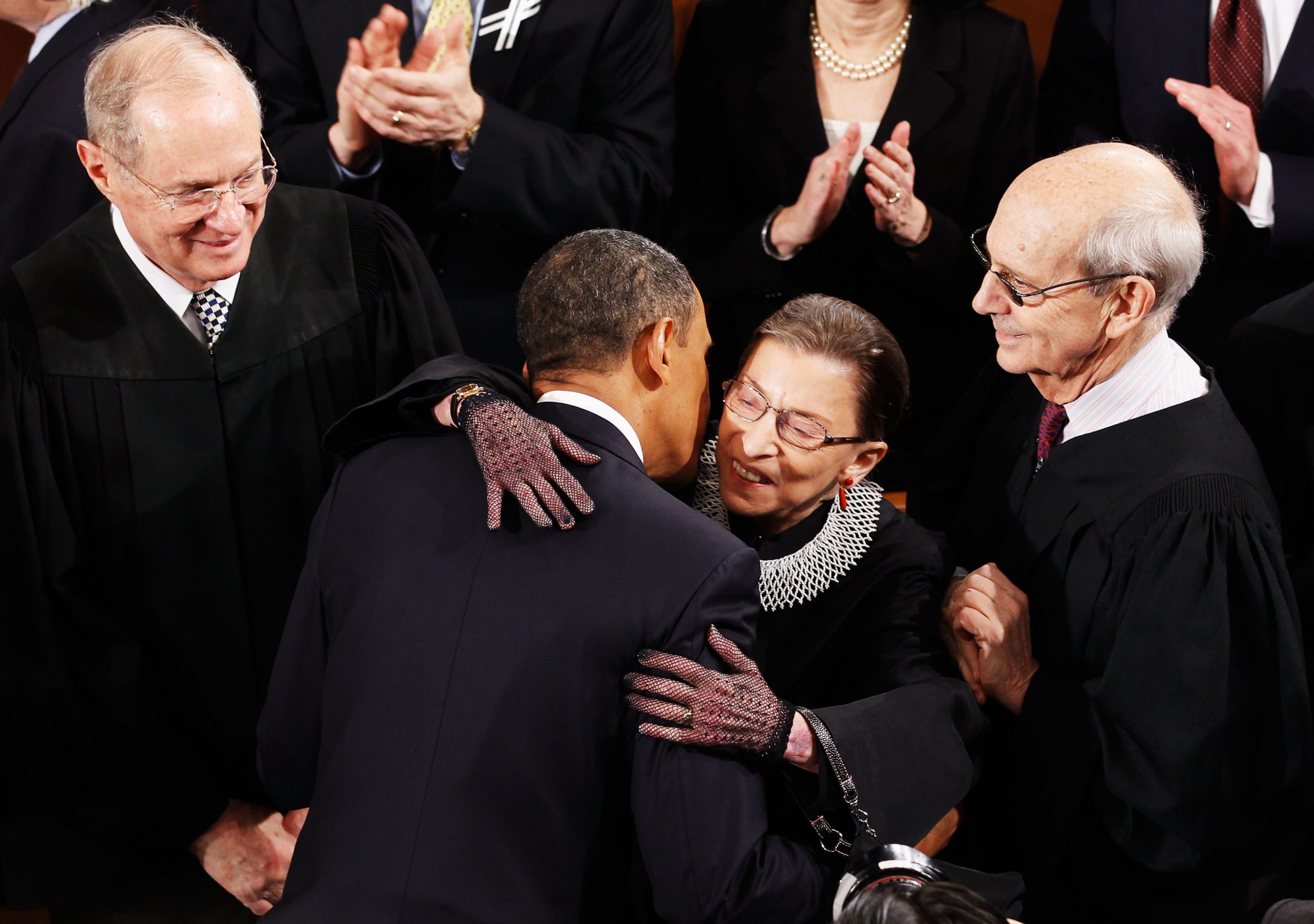 A warm greeting from Barack Obama

Ruth Bader Ginsburg had a warm relationship with then-president Barack Obama. Here, President Obama is greeting three Supreme Court Justice (along with Ginsburg, Anthony Kennedy, and Stephen Breyer), but it’s Ginsburg who merits the embrace in the meet-and-greet before the State of the Union address on Capitol Hill on January 25, 2011, in Washington, D.C.

If you had trouble recognizing President Obama, it’s probably because like all American Presidents, he visibly aged while in office. 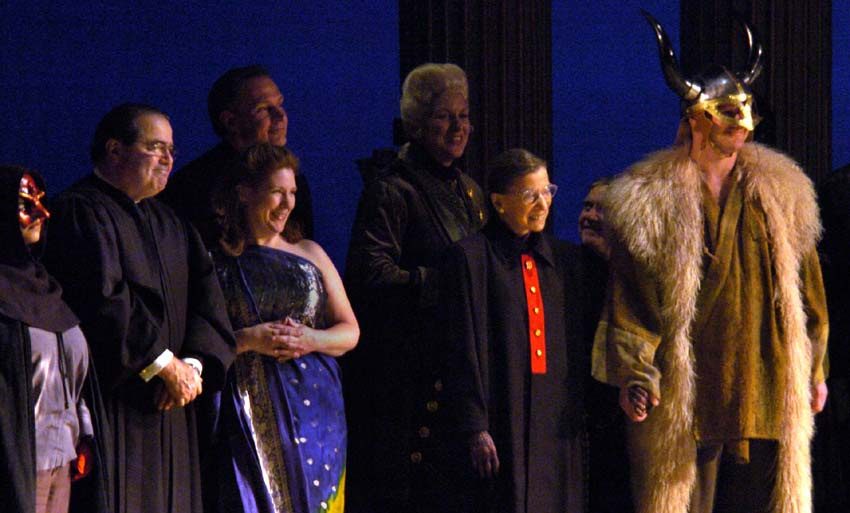 Her friendships were “impartial”

Although known as a liberal icon, Ruth Bader Ginsburg had good and true friendships with her more conservative peers. That includes Associate Justice Antonin Scalia (1936-2016). Their friendship was the subject of a comic opera, Scalia/Ginsburg, which celebrated their partisan-divide-breaching friendship. The due even made a cameo appearance together on stage in 2016 in The Audition at the Kennedy Center. Don’t miss these empowering quotes from women in politics. 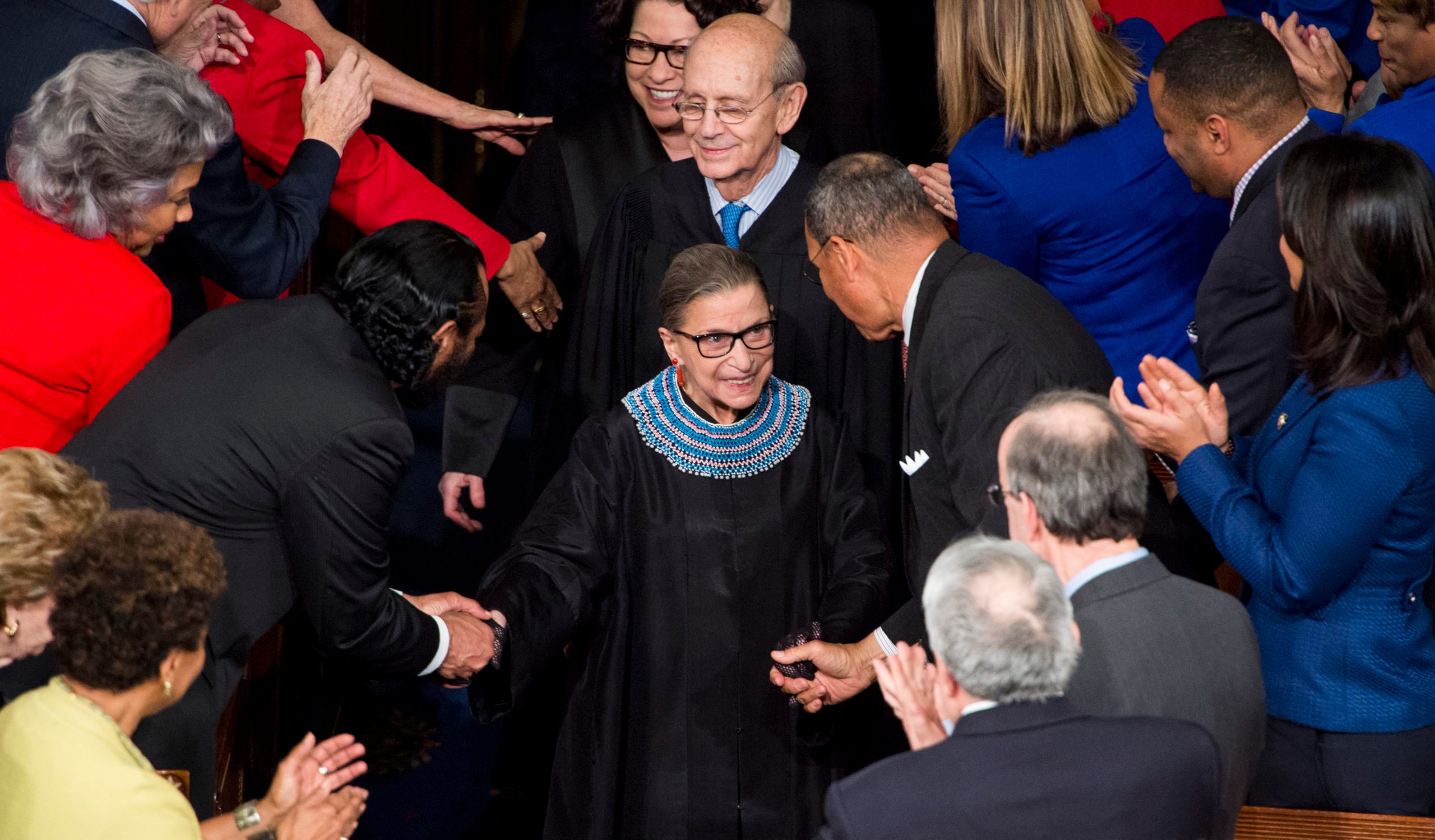 Justice Ginsburg was known during her Supreme Court tenure for the neckwear she chose to adorn her black judicial robes. Many associate Ginsburg with her famous “dissent collar” and all of her neckwear choices were intentional and symbolic. Here, she’s seen wearing a beautiful blue lace collar for President Obama’s 2015 State of the Union address. 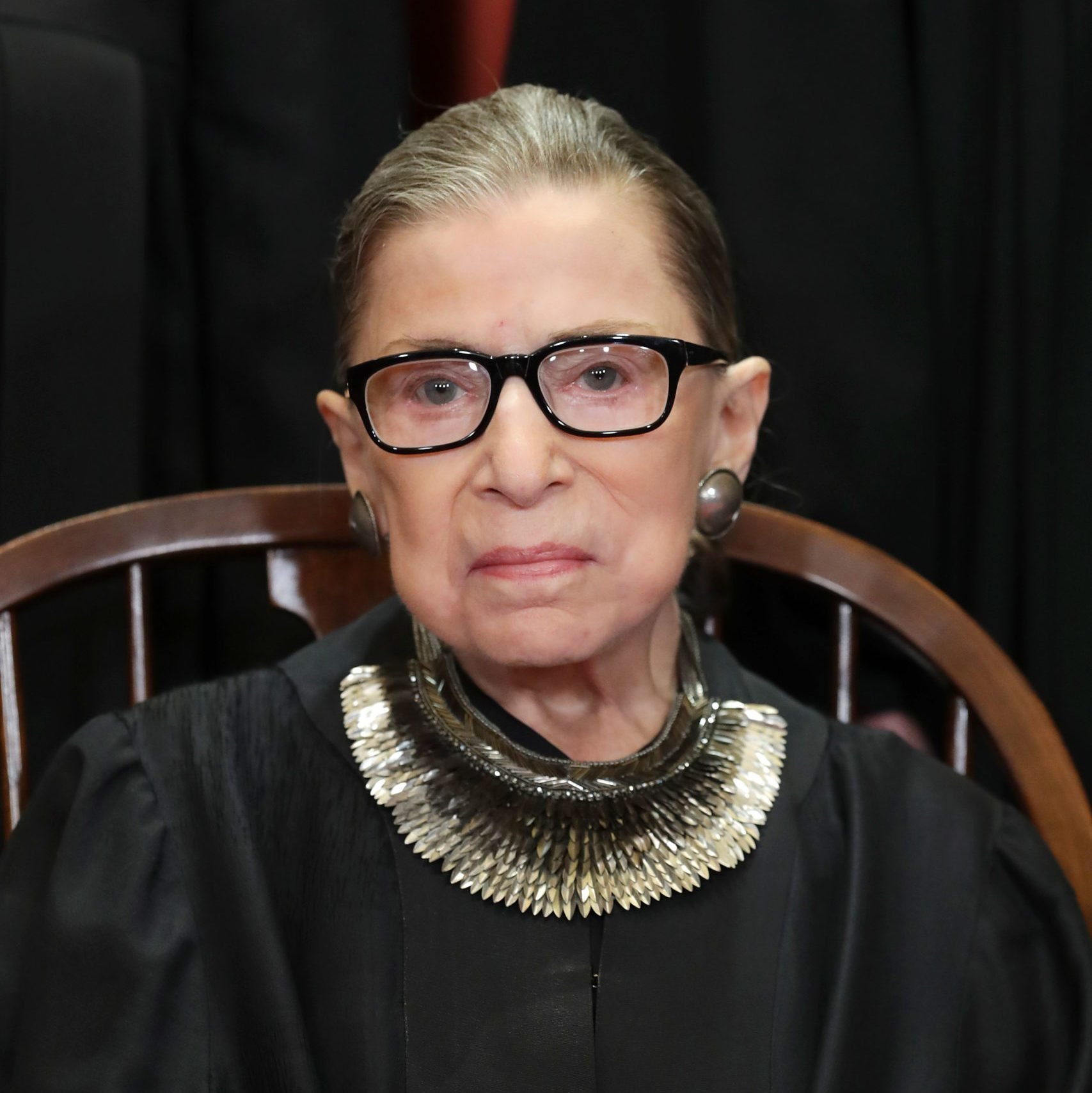 While Ginsburg ended up coming to like and respect her fellow Associate Justice Brett Kavanaugh, it’s impossible to deny the controversy surrounding his appointment in 2019, which involved allegations of sexual assault and alcohol abuse. And that’s what some see in her choice to wear the statement necklace shown in this photo to the photoshoot for the first official Court portrait that included Kavanaugh. Find out the answers to political questions you’ve been too afraid to ask. 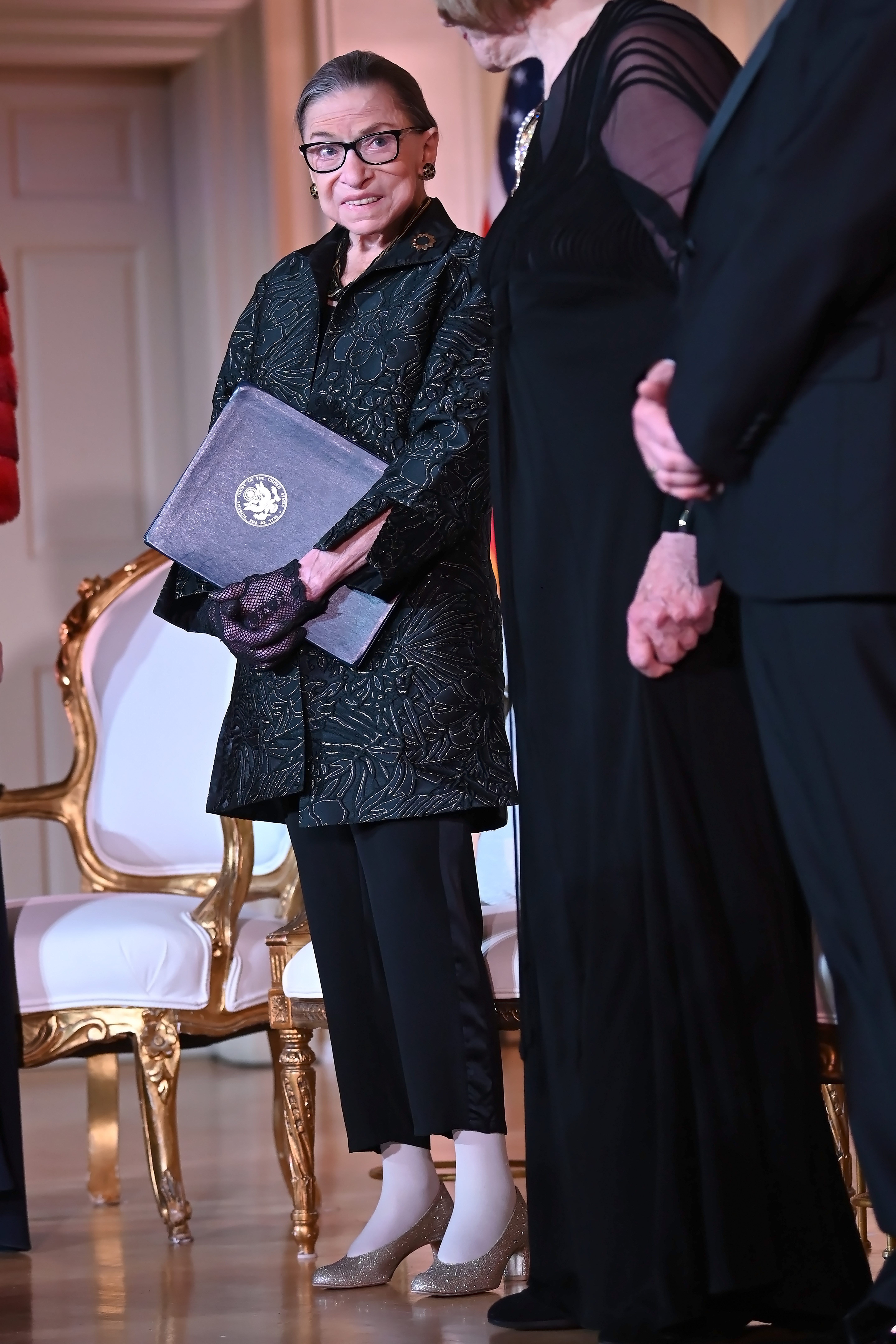 The diminutive but powerful Justice is seen here attending the Justice Ruth Bader Ginsburg Woman of Leadership Award ceremony at The Library of Congress on February 14, 2020, in Washington, D.C., where she presents the Justice Ruth Bader Ginsburg Inaugural Woman of Leadership Award to Agnes Gund, a philanthropist and patron of the arts. This is one of the last public photographs ever taken of Ginsburg. 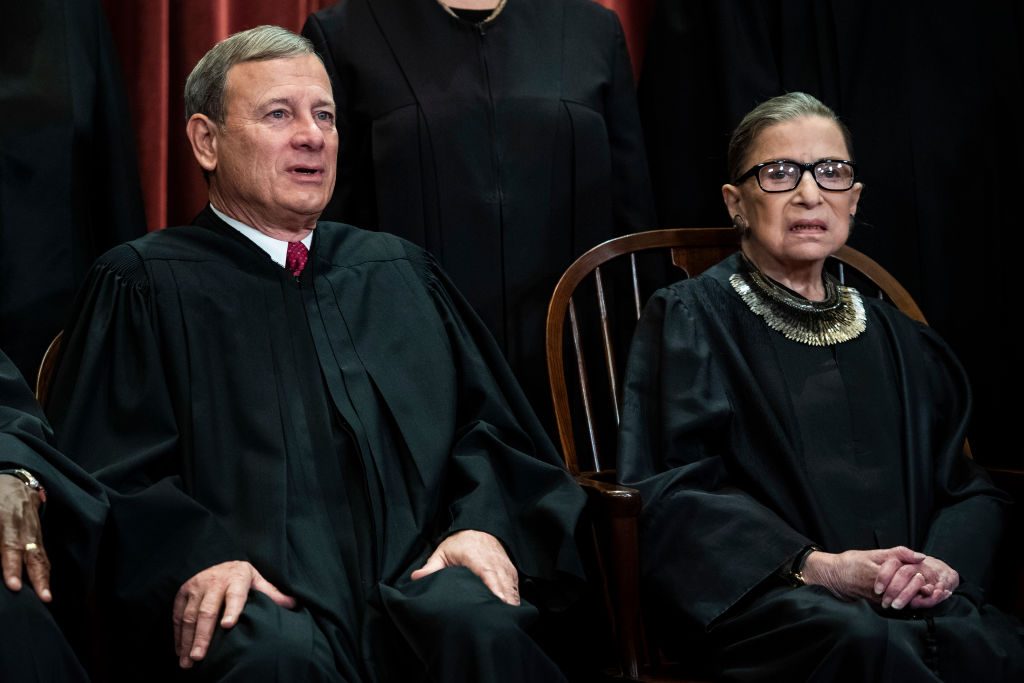 “Our Nation has lost a jurist of historic stature,” wrote Supreme Court Chief Justice John Roberts (pictured here) in response to learning of his cherished colleague’s passing. “Today we mourn, but with confidence that future generations will remember Ruth Bader Ginsburg as we knew her—a tireless and resolute champion of justice.”

What our nation will never lose, however, is our collective memory of this incredible social, cultural, legal, and political pioneer. Read on for powerful RBG quotes that just might define her legacy.