8 Rivers That Could Disappear in the Next 100 Years

Find out how humans have put these vital waterways in peril.

From the time mankind first began, rivers have been an essential source of survival. These all-important waterways are critical for we humans to exist—and yet we haven’t been very kind to them. In their new book, Rivers of Power, Laurence C. Smith, John Atwater and Diana Nelson professors at Brown University, examine how these natural forces “raised kingdoms, destroyed civilizations and shape our world.” Take a look at what the world’s most polluted beaches used to look like.

The Murray-Darling Basin (MDB) in southeastern Australia covers 14 percent of Australia, yet it produces nearly 40 percent to the country’s agricultural production. That’s a problem, as Smith notes that agriculture is one of the biggest river killers, because once that water is used, it is basically gone for good. “Some of the water we use can be recycled and returned. Municipal water supply is good that way because you just pipe it out, you drink it, it goes to the sewers, and then it’s cleaned up and put it back in the river,” Smith says. “But you can’t recover evaporated water from the fields. Irrigation is a very consumptive process.”

In addition, this waterway has a mixture of challenges that threaten its well-being, including salinity, erosion, blue-green algal blooms, water quality, and invasive species, according to the Australian Parliament. It may also suffer adverse effects from climate change. Find out the difference between climate change and global warming.

“As a resident of L.A. for over 20 years, I can attest that most Angelenos do not even know where the Los Angeles River is,” Smith writes in his book. “After a series of devastating floods in the first half of the 20th century that claimed more than 100 lives, the U.S. Army Corps of Engineers completed an assortment of construction projects focused on making the river less of a danger to those around it. Sadly, this meant it was no longer the mecca of lush greenery and vibrant plant life that it once was. “The river became a giant open storm sewer and was largely forgotten except by anonymous street art muralists, illegal street car racers, and set location managers for a host of films,” Smith writes

A big, ambitious plan to restore some of the previous ecological splendor to the L.A. River is in the works, and some developers have also piggybacked on that initiative with proposed projects of their own. So it’s possible this is one of the lucky endangered rivers that will be given a second chance, but a lot of details are still up in the air, so the longterm fate of this river is unknown at this point.

Mother Nature didn’t design rivers to accommodate humans and our preferences of where we want to live. So rather than build our large metropolitan areas where the rivers already exist, we often went backward by building cities in locations we found most desirable and then tried to reconfigure the rivers to adapt to our arrangements. “If we didn’t dam and divert rivers the way we do, the human settlement pattern of the world would look way different, especially in the western United States,” Smith says. “You wouldn’t have a city the size of Los Angeles and Vegas wouldn’t be there. We don’t live where the water is produced. We like to live in warmer, dry places and bring the water from elsewhere. It’s kind of amazing how mismatched it is.” Take a look at more breathtaking places that are disappearing.

“The source of the Yellow River [in China], itself the water source for 140 million people in a country of about 1.3 billion, is in crisis, as scientists warn that the glaciers and underground water system feeding the river are gravely threatened,” The New York Times reported, adding that “it is the latest burden for a river saturated with pollution and sucked dry by factories, growing cities, and farming—with still more growth planned.” The region has a complicated relationship with the river, The New York Times noted in a separate report. “The Yellow River is considered the cradle of China’s civilization—but also its sorrow. Its vast floodplains coaxed people in for agriculture. Yet its violent floods have killed millions.”

The fact that The Weather Channel did a special report on this waterway entitled “The Big Dry” pretty much tells you all you need to know about the state of the Colorado River. “There’s nothing left of the riverbed here but some hardscrabble desert plants and an ocean of dry sand,” the report noted. “What was once an estuary where trees, birds, and countless varieties of marine life made their home, now thousands of parched, lifeless acres lie baking in the open sun, the only things left in a region starved for water.”

The problem is exactly what Smith described. “The Colorado has been dammed and diverted in so many places that the river now slows to a trickle and dries up long before it reaches the sea,” The Weather Channel reported.

Many of the rivers that are at the highest risk have some basic things in common. “The ones that are really dangerous for humanity are heavily oversubscribed, they’re often shared between political entities—and in the case of the Colorado River, it’s by states,” Smith says. “The demands being placed on them have been growing for a long time. On top of everything else, you have climate change that exasperates that process. But even without climate change, this would be a very pressing issue for many of the world’s major rivers.” Find out the 11 longest bridges in the world.

In areas that tend to have many of the most populated regions or nations, rivers are frequently starting to go dry. “The Indus is shared by Afghanistan, China, India, and Pakistan, with headwaters in the hotly contested mountainous region of Kashmir—feuding entities, ” Smith says. One of the longest rivers in that part of the world, the Indus River is the primary source of water supply to many communities and populations.

“I have done some scientific research studying river flow trends around the world and for sure in the populations of mid-latitude, the trend is decreasing water,” Smith says. “The simple reason for that is the building of dams and reservoirs. Diversions for agriculture and cities. Plus we’re just consuming more of it. These great rivers in the summertime are turning into trickles. Population growth and industrialization is the single biggest factor. We need water for so many things, not just for drinking. Crops are the biggest one, but also for things like coolant for power plants and the production of energy.” Find out 11 major cities that are running out of water.

“The Rio Grande is a really interesting river for many reasons,” Smith says. “It’s basically a military zone as a heavily fortified border between Mexico and the U.S., which presents a range of immigration-related issues. It’s also heavily oversubscribed by both countries,” Making it worse is that the problem is not new. “Way back in 1895, there was a diplomatic skirmish between the U.S. and Mexico because the waters of the Rio Grande starting drying up and the people who lived in cities along it were facing a river that dried up in the summer, and that had never happened before.” The reason it was drying up was that the U.S. was building reservoirs way upstream to divert some of the river’s water to dry areas to grow crops. “Eventually, the two countries negotiated transboundary water-sharing agreement between nations in 1907,” Smith shares. “That became a template for a host of cooperative water-sharing agreements around the world. There are now more than 400 of them worldwide.” Find out U.S. geography facts you didn’t learn in school.

“The Jordan River is shared by Israel, Jordan, Lebanon, the Palestinian territories, and Syria,” Smith says. In 2014 that overpopulation and frequent tensions and stalemates among its bordering nations have left this river to be now mostly saline water and liquid wastes, reported National Geographic. “With the swelling ranks of Syrian refugees in Jordan, an overstressed river is at risk of going dry,” their report said. Read these scary tales of the world’s most haunted bodies of water. 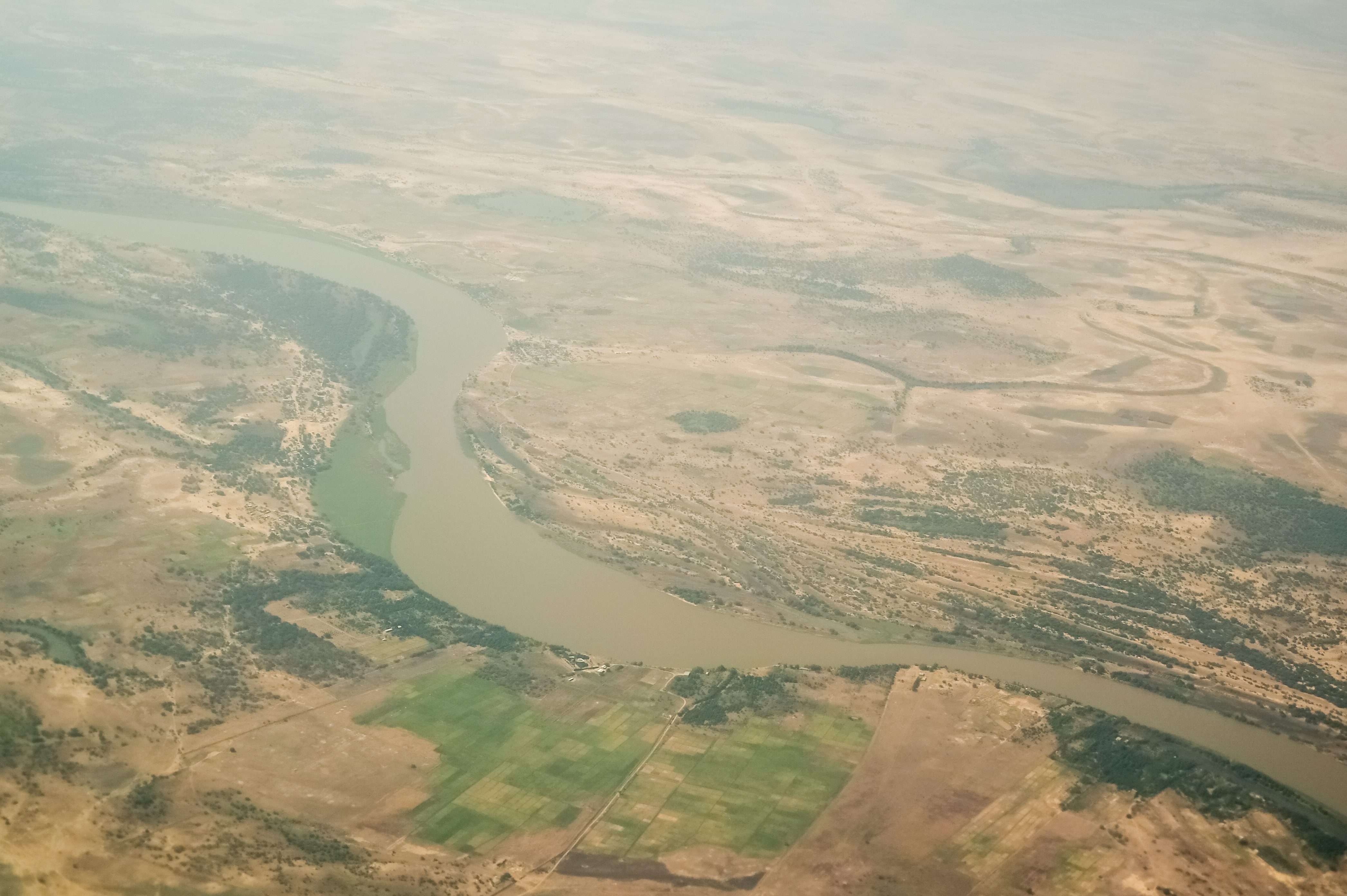 The Chari River is one of the rivers that flow into Lake Chad in west-central Africa. “Once a thriving freshwater ecosystem and a major source of livelihood for millions, Lake Chad has suffered severe desiccation from local irrigation diversions and declining rainfall,” Smith writes in his book. “Since the early 1960s, this vast lake has shriveled by 90 percent. The resulting losses of fish, cattle, and crops have created food insecurity and bleak socioeconomic conditions, making the region vulnerable to extremist political movements.” NASA’s Earth Observatory noted, “Scientists and resource managers are concerned about the dramatic loss of fresh water that is the lifeblood of more than 30 million people.” Saving Lake Chad—which in turn means trying to save the Chari River—is a top priority for those concerned for the survival of people in that region. Find out 40 ways you can help reduce your carbon footprint and do your part for the earth.