20 of the Most Beautiful Sea Caves in the World

Even if we can't travel just yet, these photos will have you planning a sea cave adventure we're all sure to take after we can board a plane again. 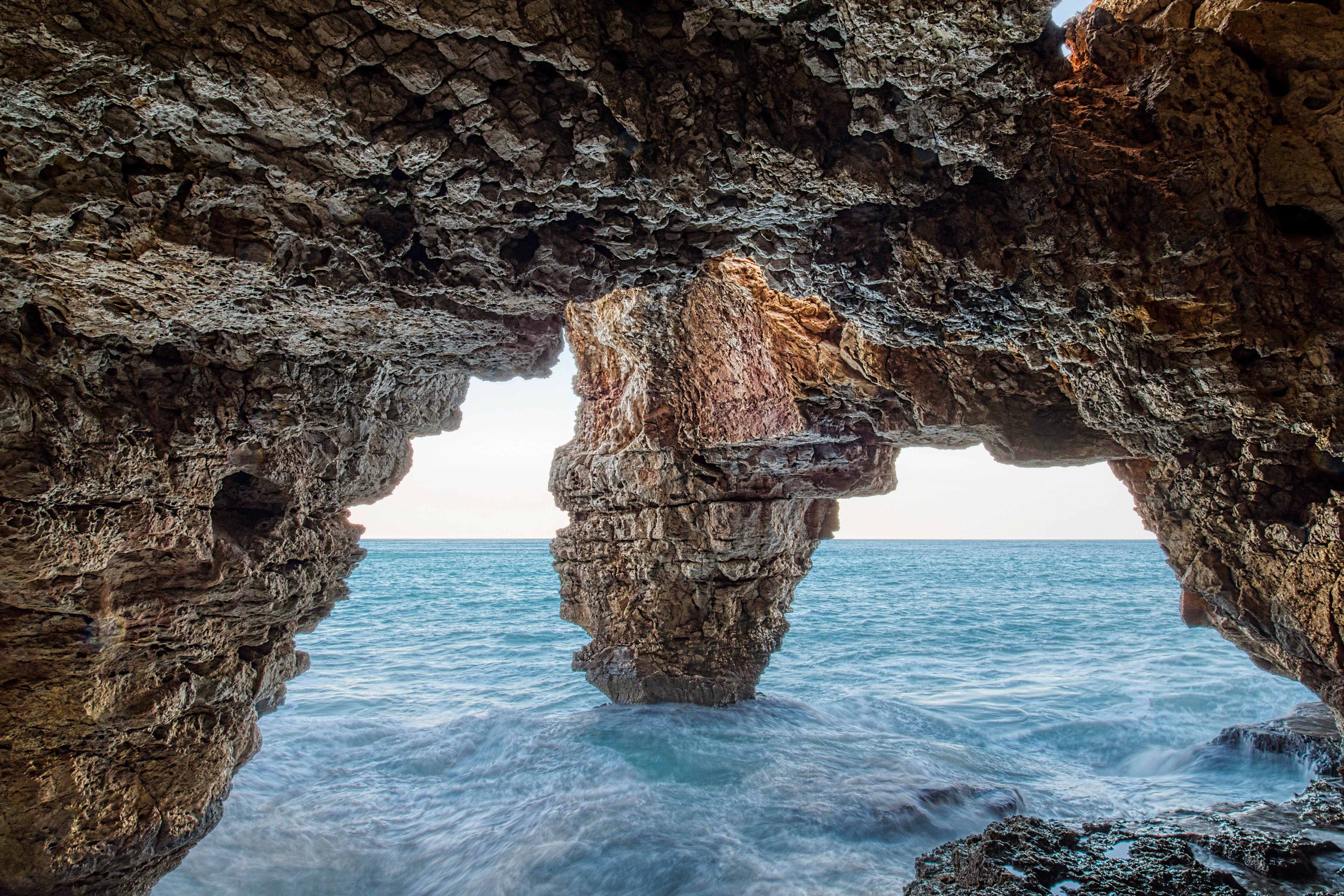 Hundreds of thousands of years in the making, each underground cave is completely unique. Formed by water erosion, with the occasional help from some strong winds, it’s no wonder sea caves are a huge tourist draw for those who love Mother Nature’s spectacles. Just like these photos of the clearest blue water beaches in the world, you’ll be blown away by each of these incredible sea caves. 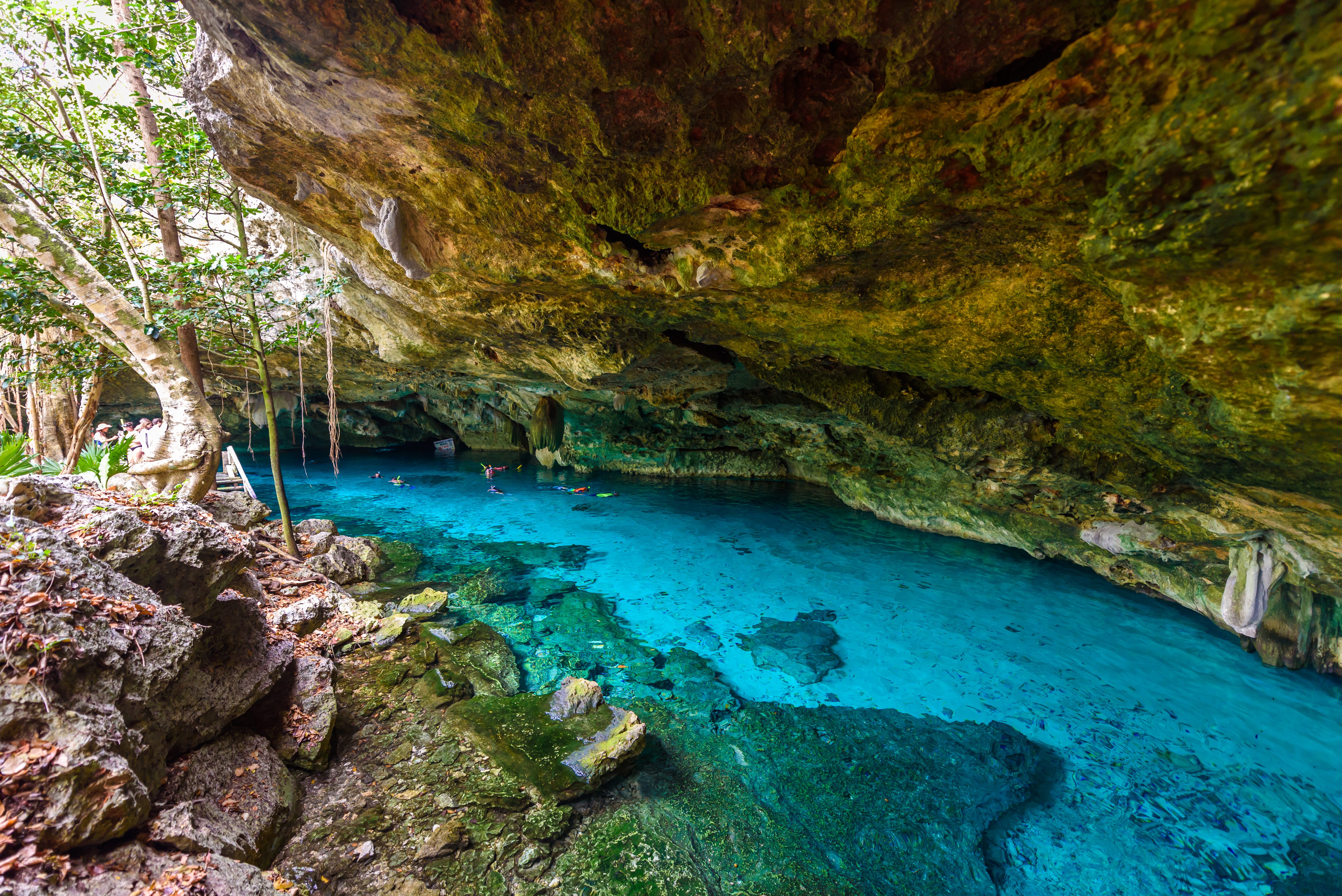 An excellent diving site, tourists and locals alike love visiting this incredible set of caves. The two caves known as Cenote Dos Ojos were created by two 70 foot sinkholes that were connected by a narrow underwater passageway. If you take one of the local guided tours or enter to scuba on your own, you’ll see lots of underwater fish and two types of shrimp. Rather stay at the water’s surface? There you can enjoy the bat cave! 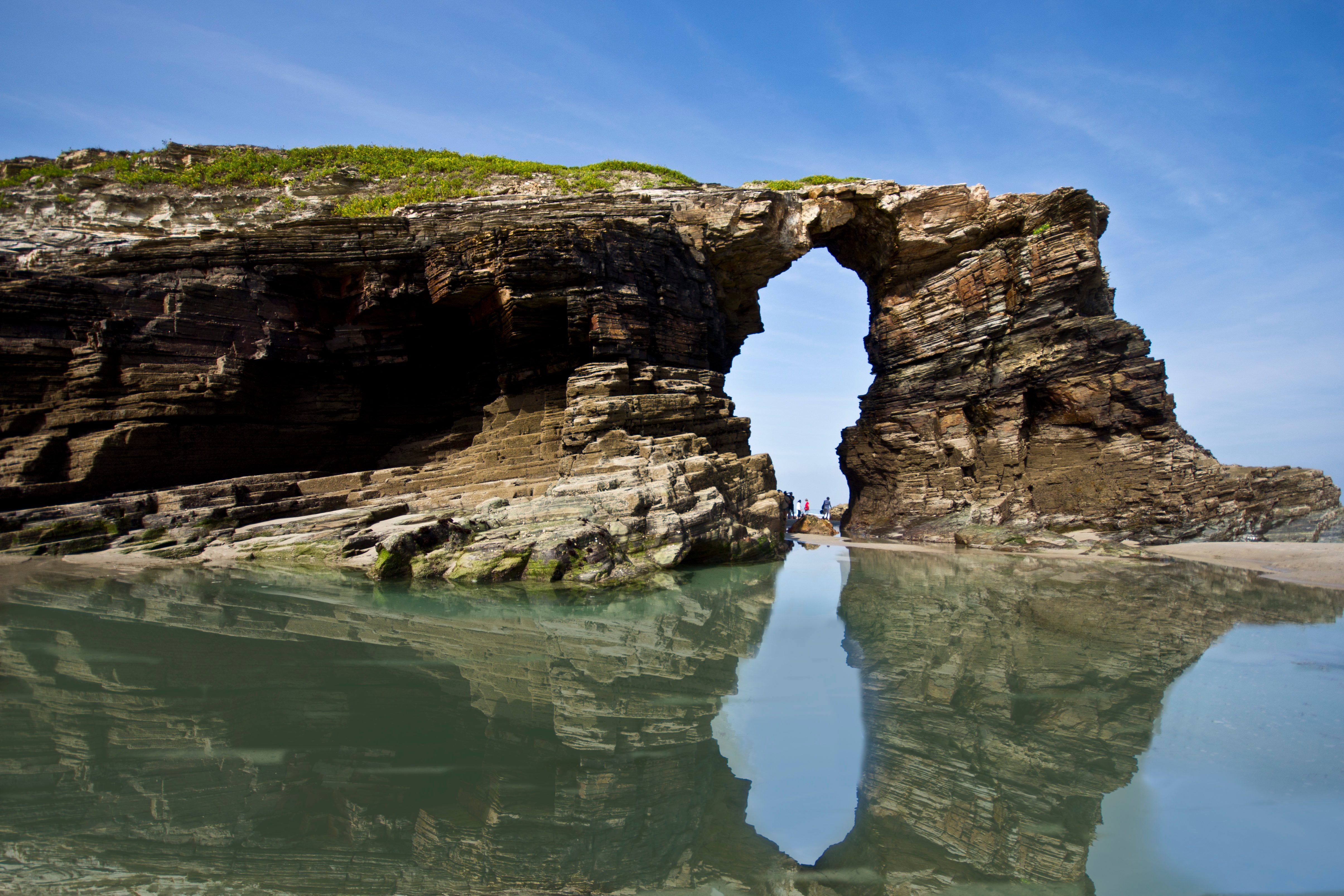 Playa de las Catedrales, or the beach of the cathedrals, is located off the Cantabric Sea coast. To keep humans’ effect on these caves to a minimum, there is a limited number of people allowed into this attraction every day. You can make a reservation online ahead of time to ensure you and your travel companions will be able to get in. The arches and caves that make this place famous are only accessible during low tide which occurs twice a day. This photo is so reminiscent of our favorite naturally gorgeous rock formations around the world. 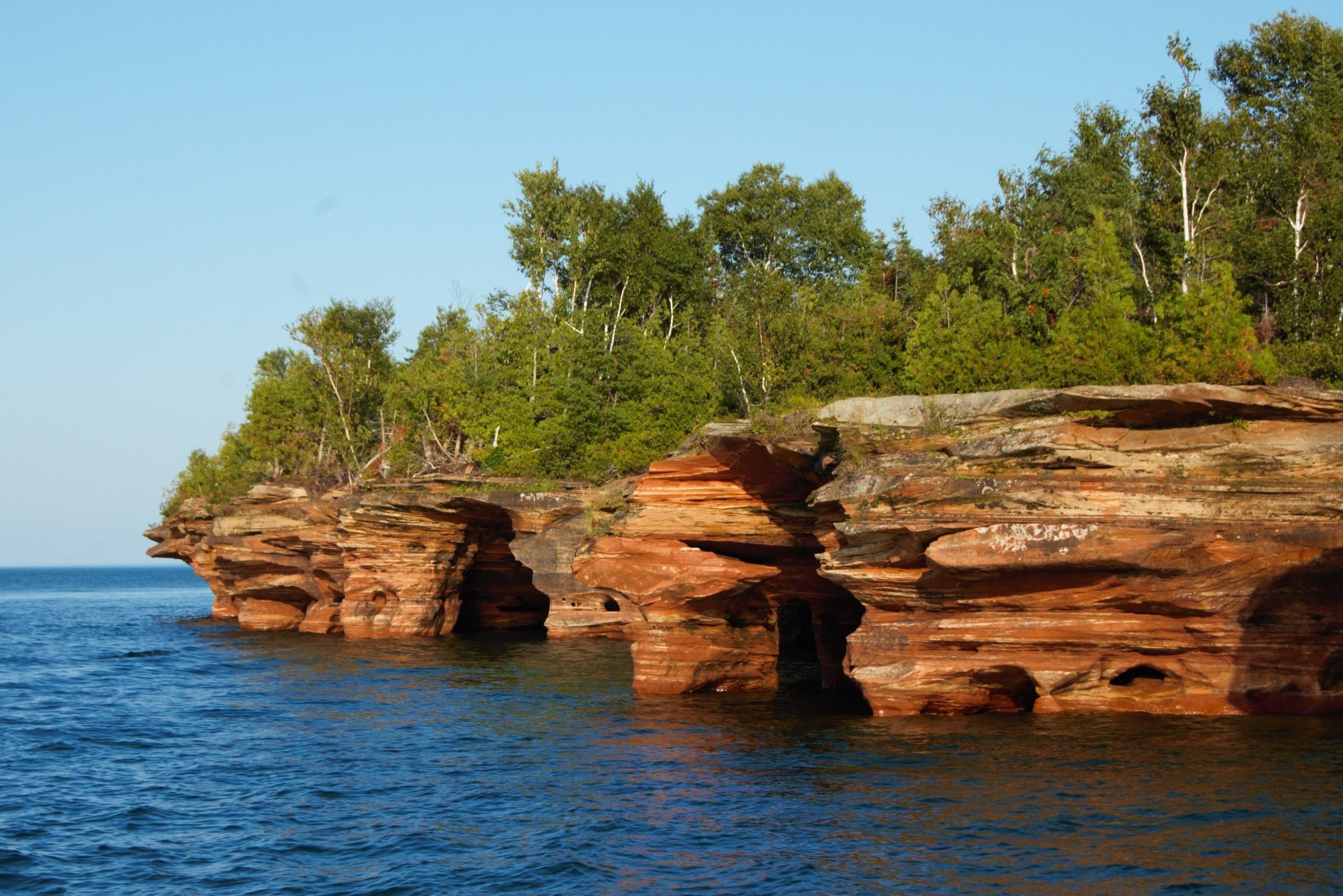 Yes, Wisconsin is nowhere near any saltwater so calling this a sea cave might be a bit of a stretch, but this hidden gem is too incredible to skip. Located just off Lake Superior, summer visitors to these incredible water-filled caves will catch a glimpse of the stunning red sandstone that makes up the rock formations in this area. The best experience can be had in the winter when the freezing and melting of the water creates millions of icicles that sparkle like diamonds on the walls and ceiling of the caves. 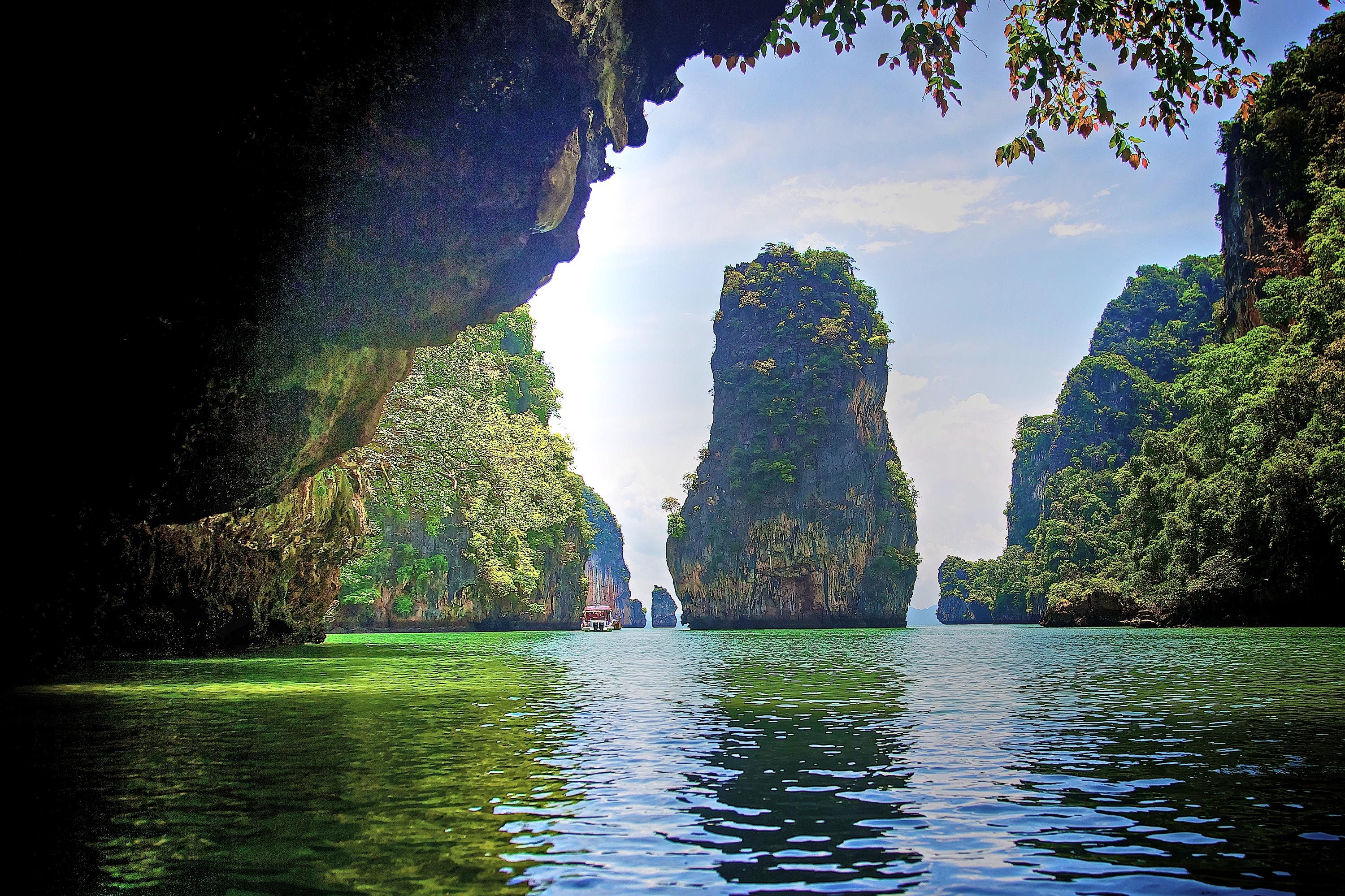 As you can see from this video, exploring Phang Nga Bay’s incredible lagoons and sea caves by canoe is like no other tourist experience. Part of the Ao Phang Nga National Park in Thailand, this incredible stretch of stunning blue/green waters is surrounded by the striking rock formations and the vibrant jungle Thailand is so well known for. A bonus for any classic film lovers, you may recognize this bay from the James Bond Film, The Man With the Golden Gun. Here are some more iconic movie sets you can visit in real life. 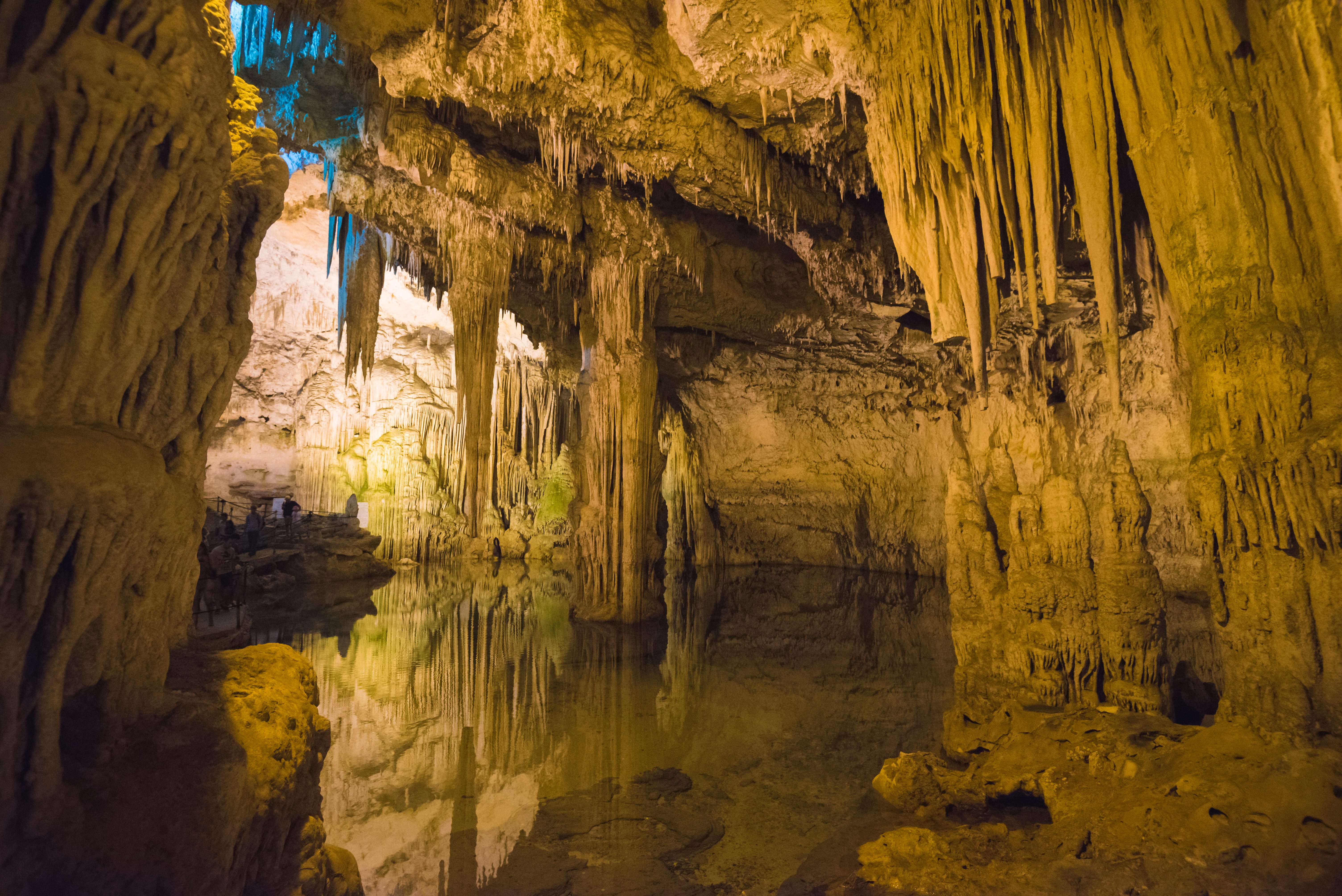 Located on the island of Sardinia Italy, this cave contains both major forms of mineral deposits, but it is well known for its stalactites. (Stalactites are the mineral deposits that grow down from the ceiling, like icicles, whereas stalagmites grow up from the floor.) Neptune’s Grotto is estimated to be about two million years old and has become a very popular tourist site. While the full extent of this sea cave is massive, only a few hundred meters are open to the public.

This sea cave can be found on the Pacific coastline of New Zealand and is a great spot for snorkeling and swimming. A beautiful, easy walk away from nearby Hahei beach, these stunning beaches boast massive natural rock archways and incredible aquatic wildlife alongside their famous sea cave. After seeing this shot, it’s no wonder New Zealand is included in the photos of the world’s most beautiful countries. 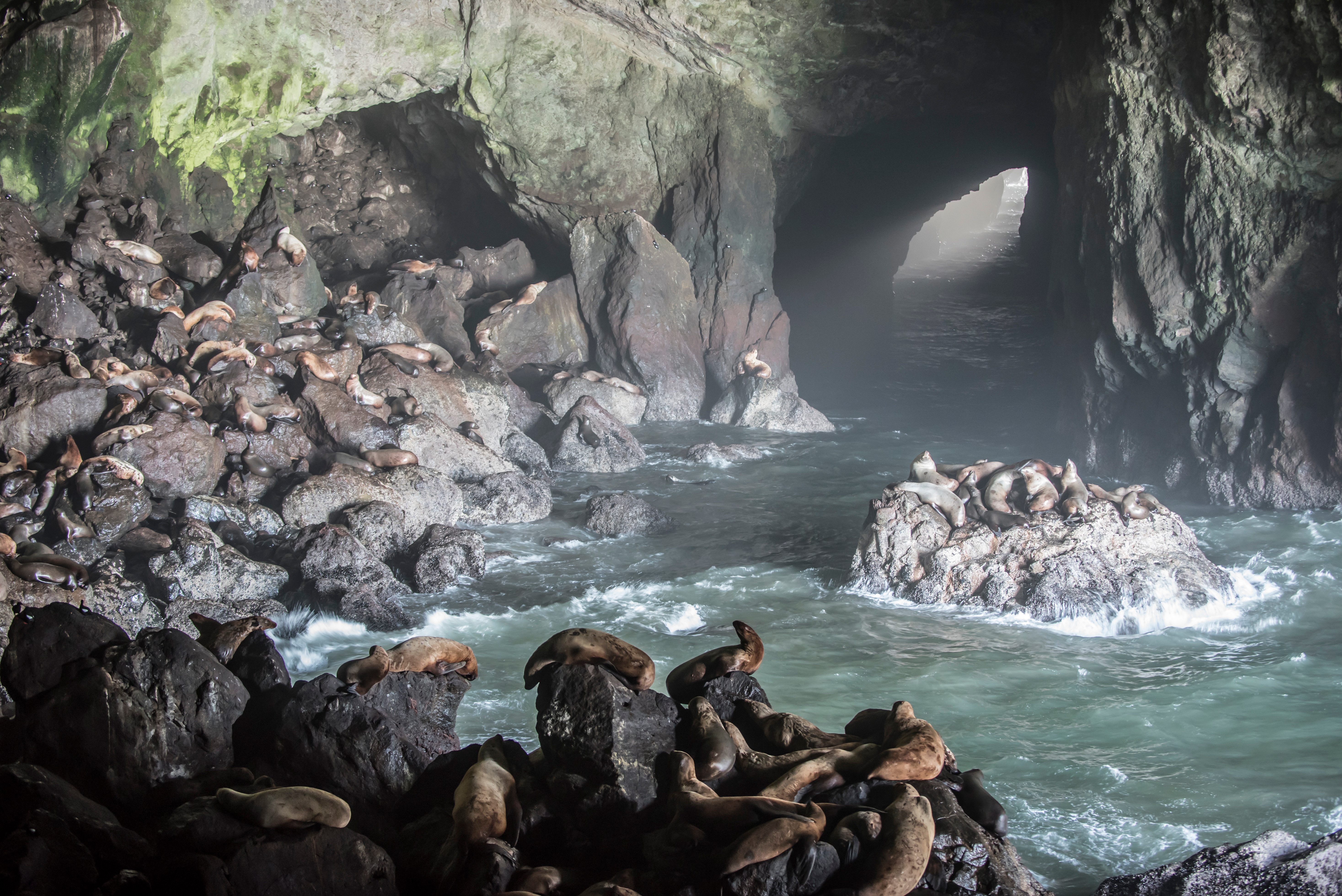 This area has been a privately-owned wildlife preserve since 1932. In the winter, the local sea lions take refuge from the weather by retreating into the sea caves, but in the summer, you’re more likely to find them on the rocky shoreline. These caves are estimated to be 25 million years old and today, it is the length of a football field, and nearly 12 stories high. Traveling with someone who needs easier accessibility? This sea cave has elevator access! 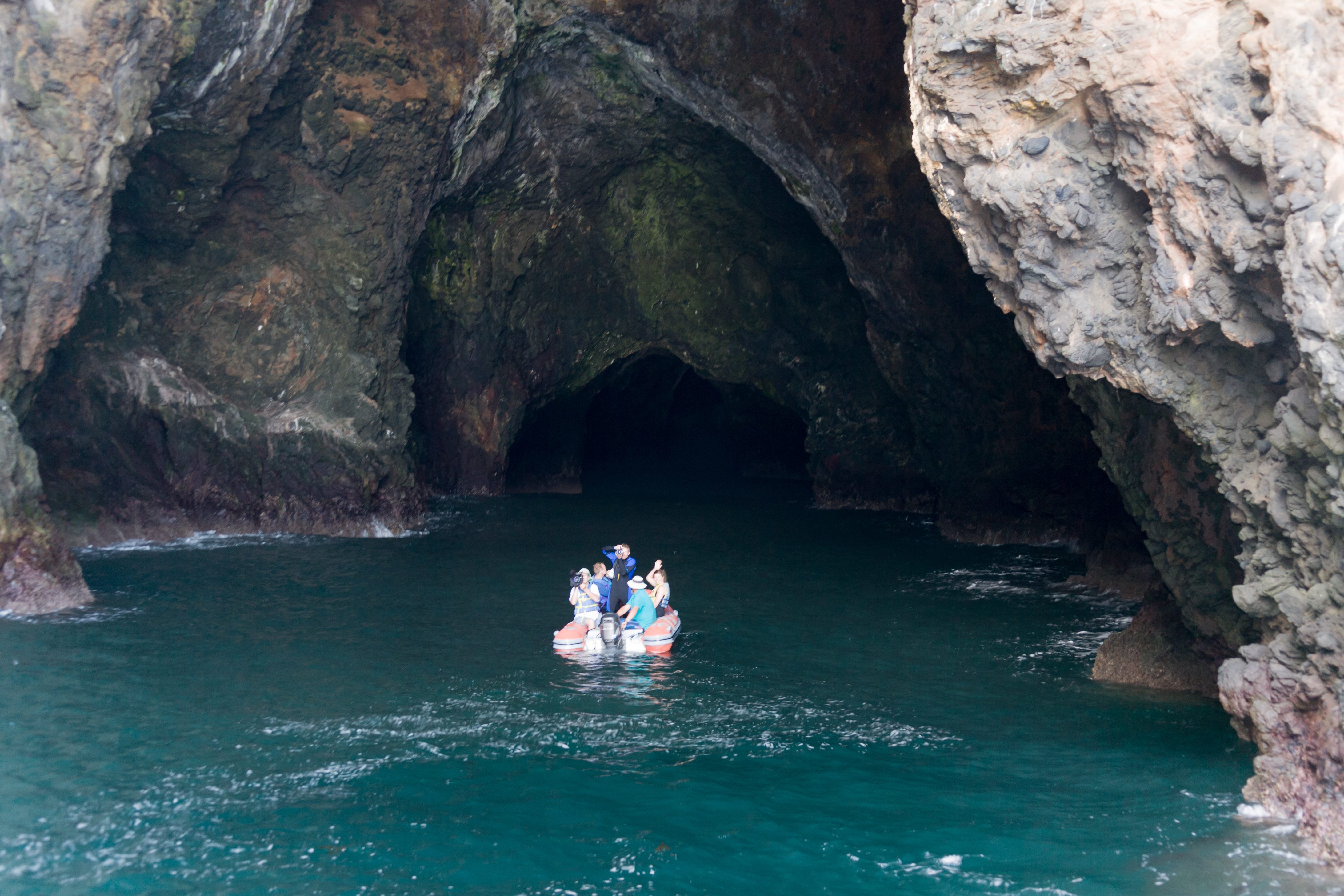 One of the world’s deepest sea caves can be found right here in the United States. You can paddle a kayak straight in—in the springtime you’ll have to paddle through a light waterfall that trickles over the entrance. There are plenty of tour companies that offer guided tours. The name comes from the unique colored rocks and lichen that appear on this massive cave’s walls. It is very reminiscent of the most colorful natural wonders on earth. 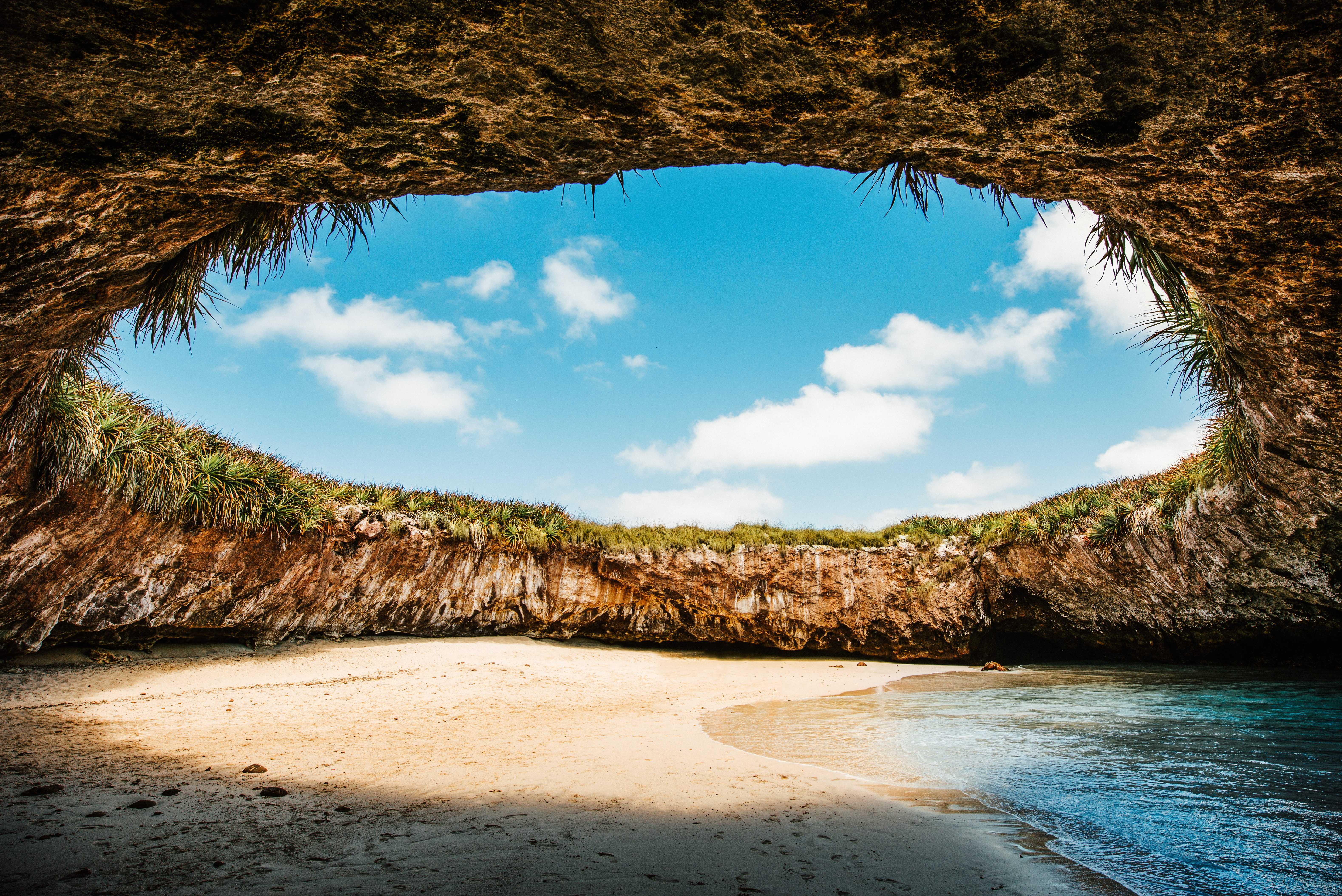 Calling this a sea cave is slightly misleading. Playa Escondida used to be a sea cave, but long ago, the cave’s ceiling collapsed and it is now better described as a hidden beach. Often referred to as the “eye to the sky,” this former sea cave is now a hugely popular swimming and sunbathing spot. 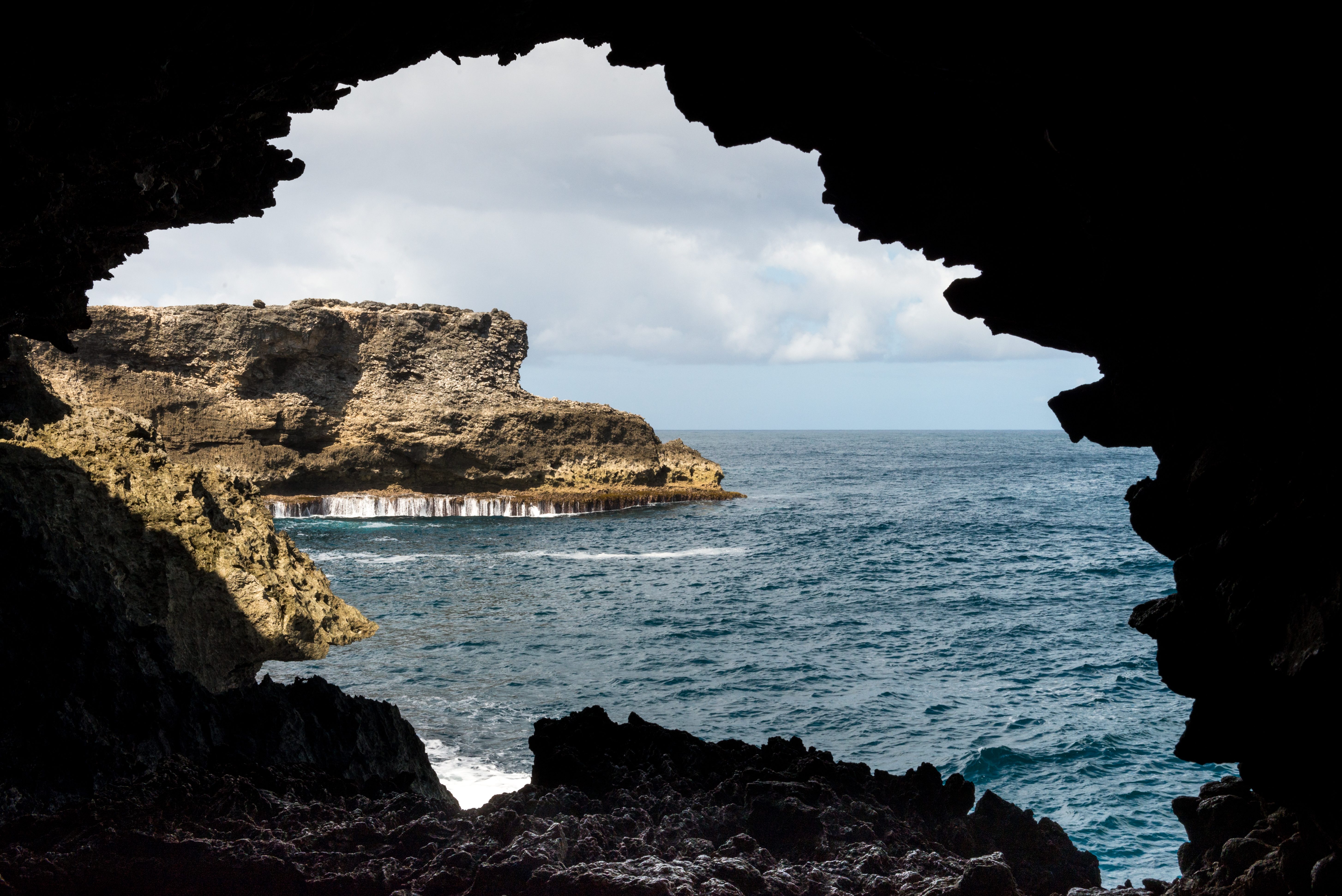 A must-see of Barbados sightseeing, Animal Flower Cave opens directly into the Atlantic Ocean. Not only should you take advantage of swimming in this sea cave on days when the water is calm, but even if the water is too rough to swim in, you’ll love the views of the powerful ocean. There’s also delicious local seafood at the Animal Flower Cave Restaurant, which is set on the coast just above the cave’s entrance. You’ll also find some secret caves on the list of secret spots hidden in America’s national landmarks. 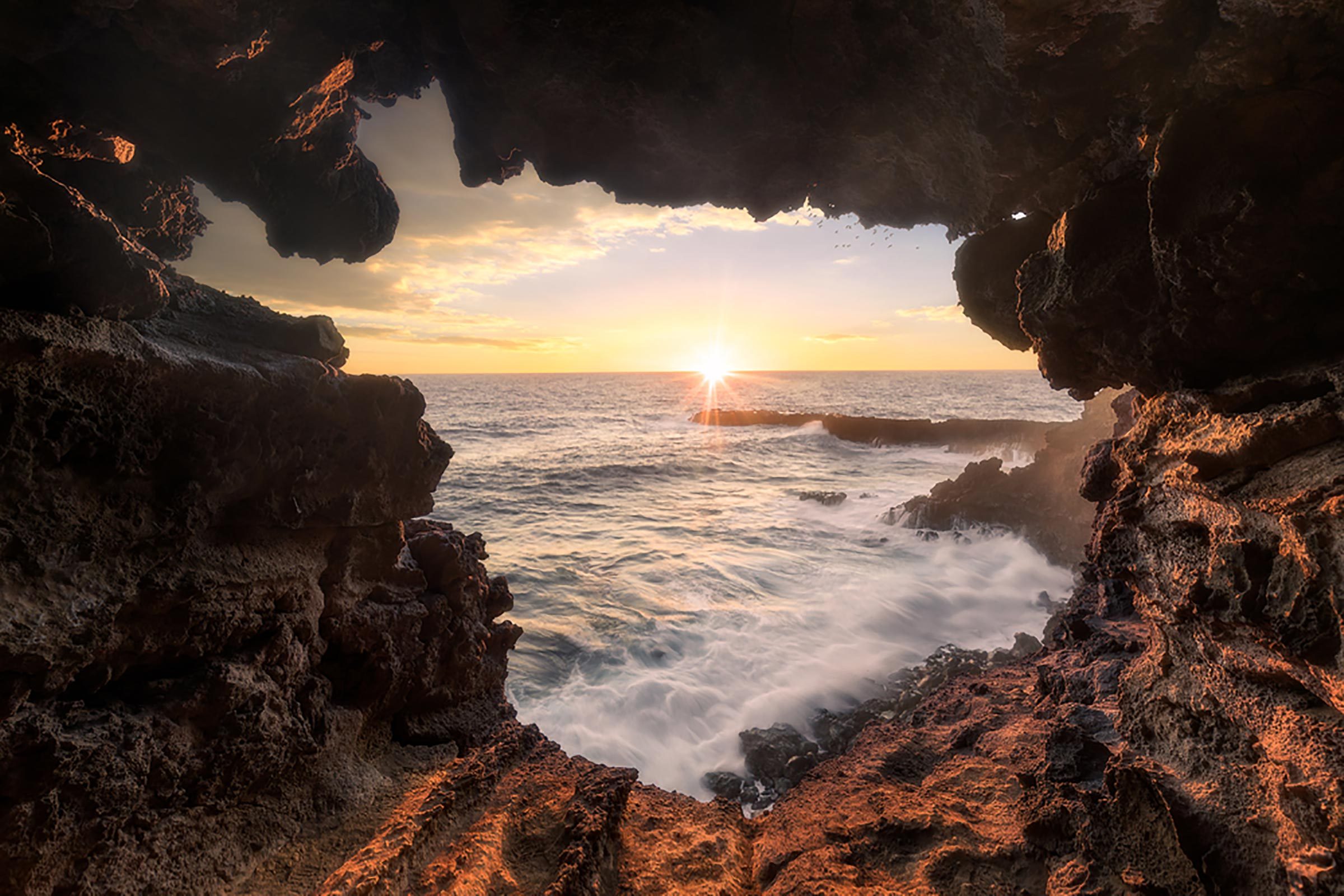 Ana Kakenga is the most visited cave on Easter Island—and for good reason. To visit the cave, you must enter through a small hole in the ground, which measures to be slightly less than two feet wide. As you could imagine, the entrance is very tough to find without a tour guide. After you enter the 164-foot-long volcanic tube, you’ll find two stunning naturally formed windows looking over the water. 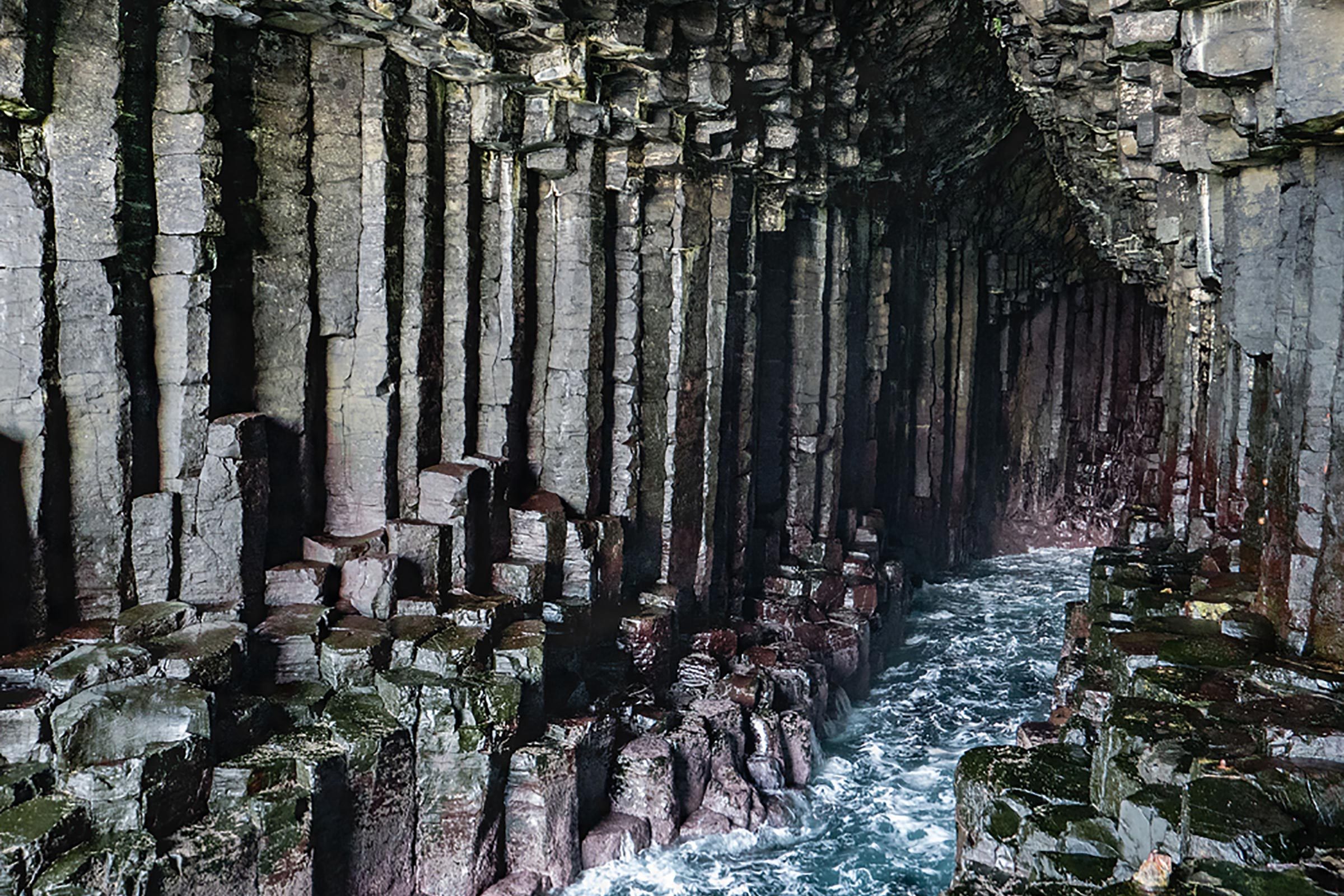 At 72 feet tall and 270 feet deep, this cave is unlike any other. Fingal’s Cave on the uninhabited Isle of Staffa in Scotland is formed entirely of hexagon-shaped basalt columns. Its unique design has had an influence on a fair share of its visitors, including Pink Floyd. (Pink Floyd actually named an early, unreleased song after the cave.) To visit this incredible structure, you can take a boat or hike from the island. However you get there, you’ll be glad you checked this cave off your bucket list. Speaking of bucket lists, you NEED to add these 15 homes built in really strange places to yours. 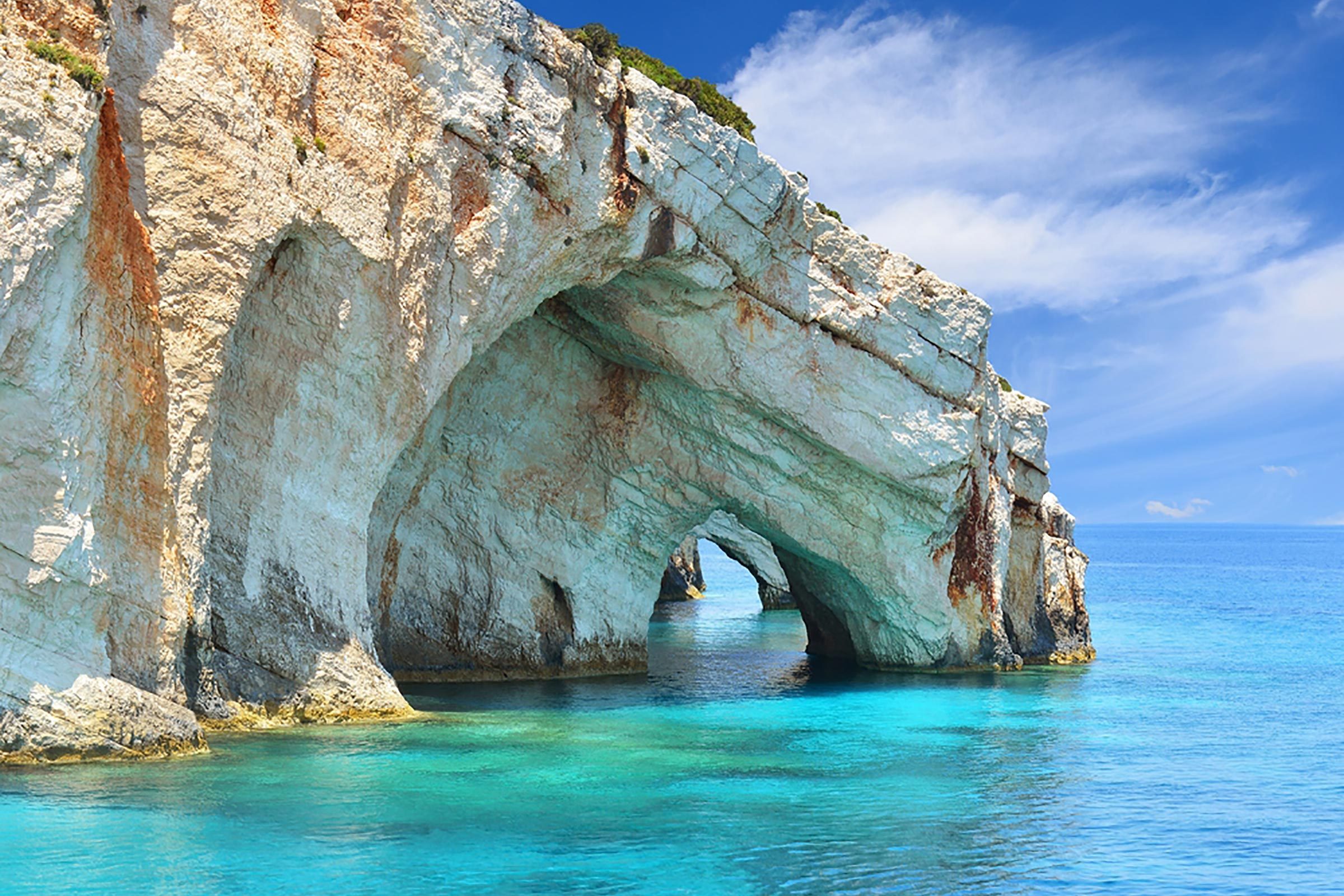 Located on the north end of the island in the cliffs below Cape Skinari, you’ll find the incredible collection of Zakynthos’ Blue Caves, with the largest being the Kianoun Cave. It’s no surprise that these caves draw in thousands of visitors every year, ever since it first opened to the public in 1897. The surrounding white cliffs and beautiful seabed reflect the blue color of the water, making the caves appear to have a turquoise hue. The caves can be visited via boats or boat tours. The marine life and crystal clear water make it a hotspot for snorkeling and scuba diving, and Shipwreck Beach, one of the beaches with the clearest water in the world, is only a few minutes away. 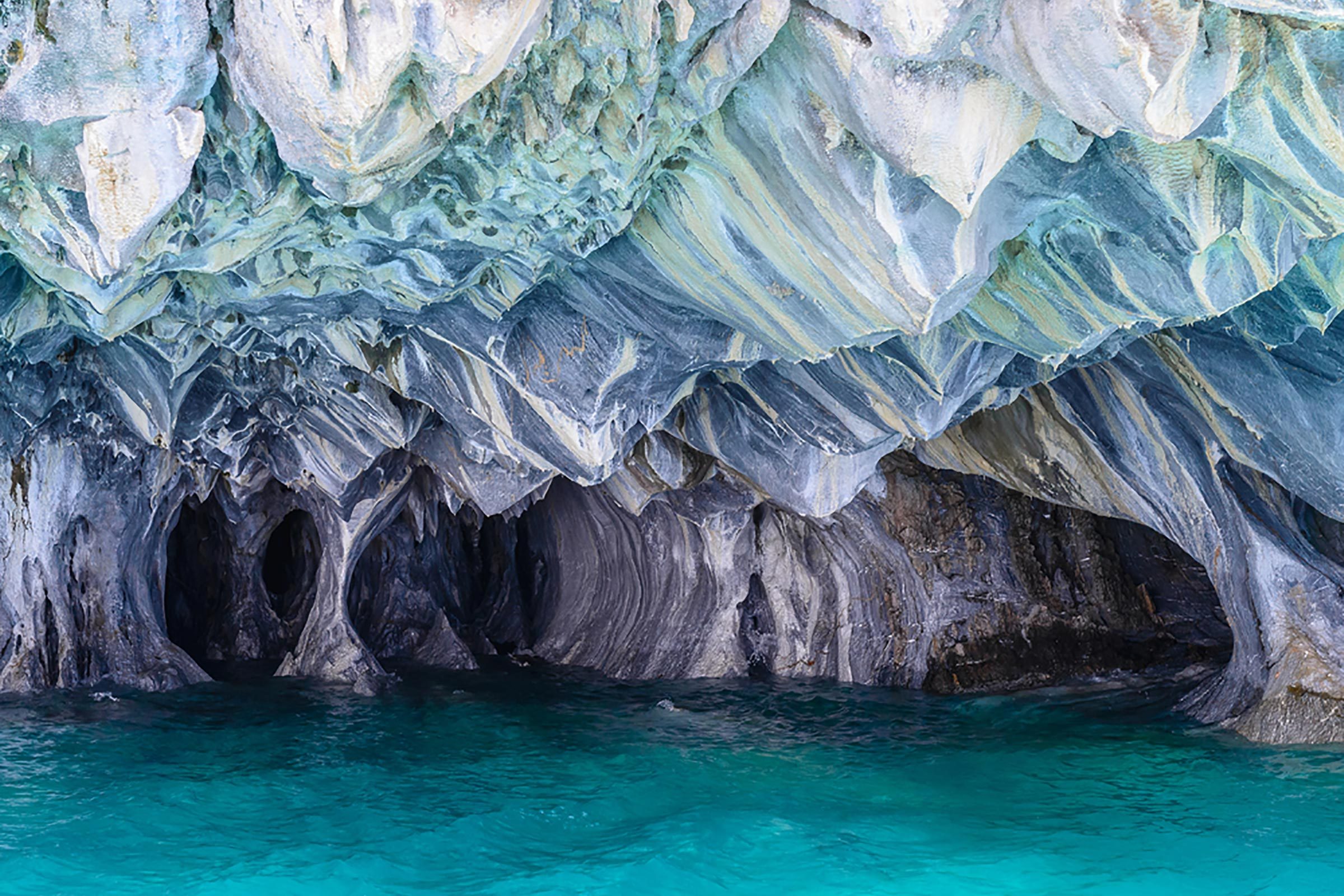 Located in the Patagonian Andes on a peninsula in the center of Lake General Carrera, the Marble Caves in Chico, Chile, are only accessible by boat or kayak. These secluded caves were formed over 6,200 years ago but still serve as spectacular natural wonders. The surrounding crystal clear waters allow visitors to see the rock formations beneath them while the rock ceilings above change color (depending on the water levels and the season). The best time to visit: during sunrise and sunset, when the sun’s rays illuminate the cave walls, making it an experience to remember. You’ll also love the 50 best beaches in the world. 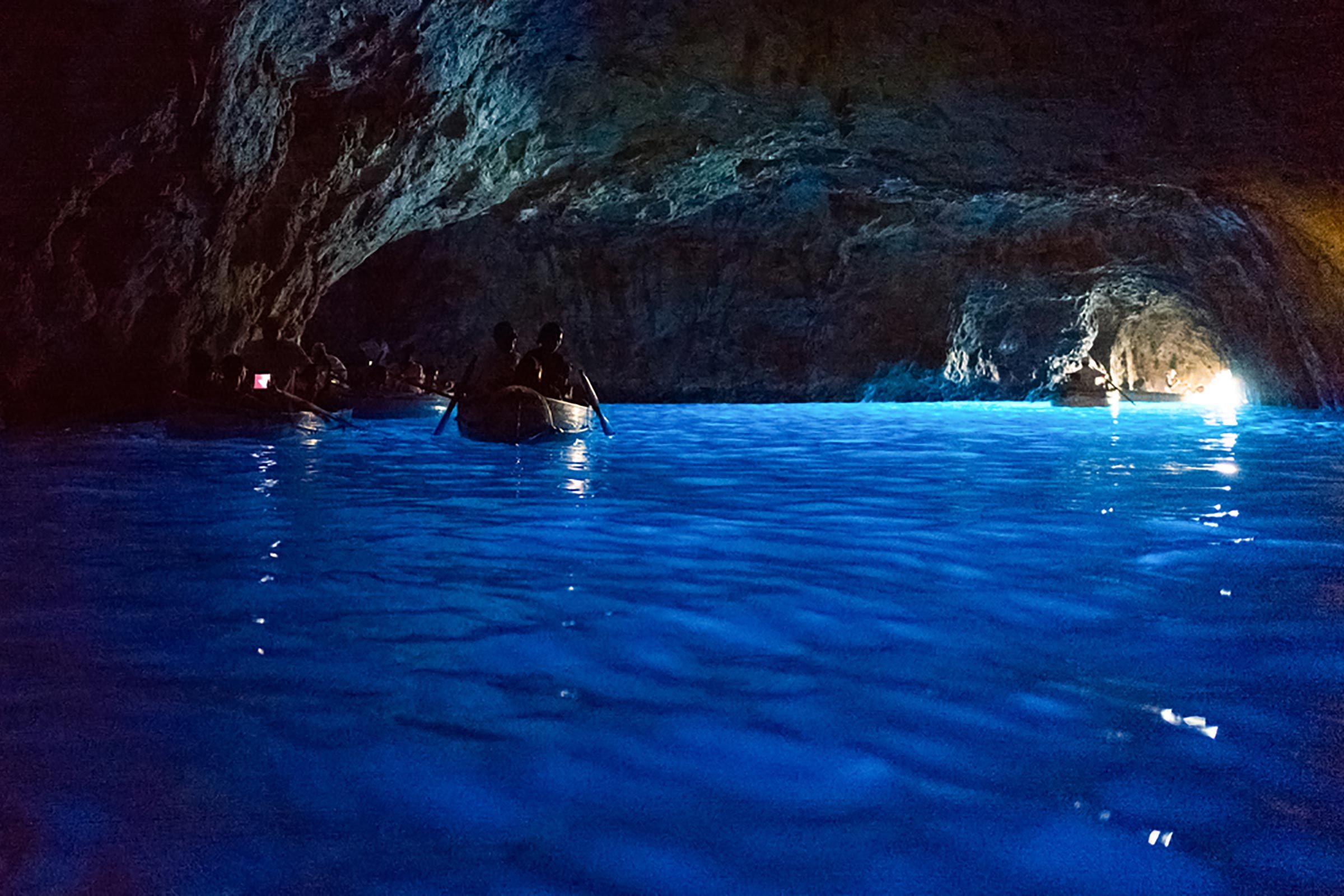 The Blue Grotto in Capri, Italy, is perhaps one of the most well-known sea caves in the world. The caves have an interesting backstory. Over 2,000 years ago, the caves were used as a marine temple. Since then, rumors began speculating that spirits and demons lived inside the caves, and so it was deserted for many years. In 1826, it was rediscovered by three men and has been open to the public ever since. The best time to visit the Blue Grotto is between 12 and 2 p.m., as the blue color from the sunlight entering through the underwater opening is strongest then. 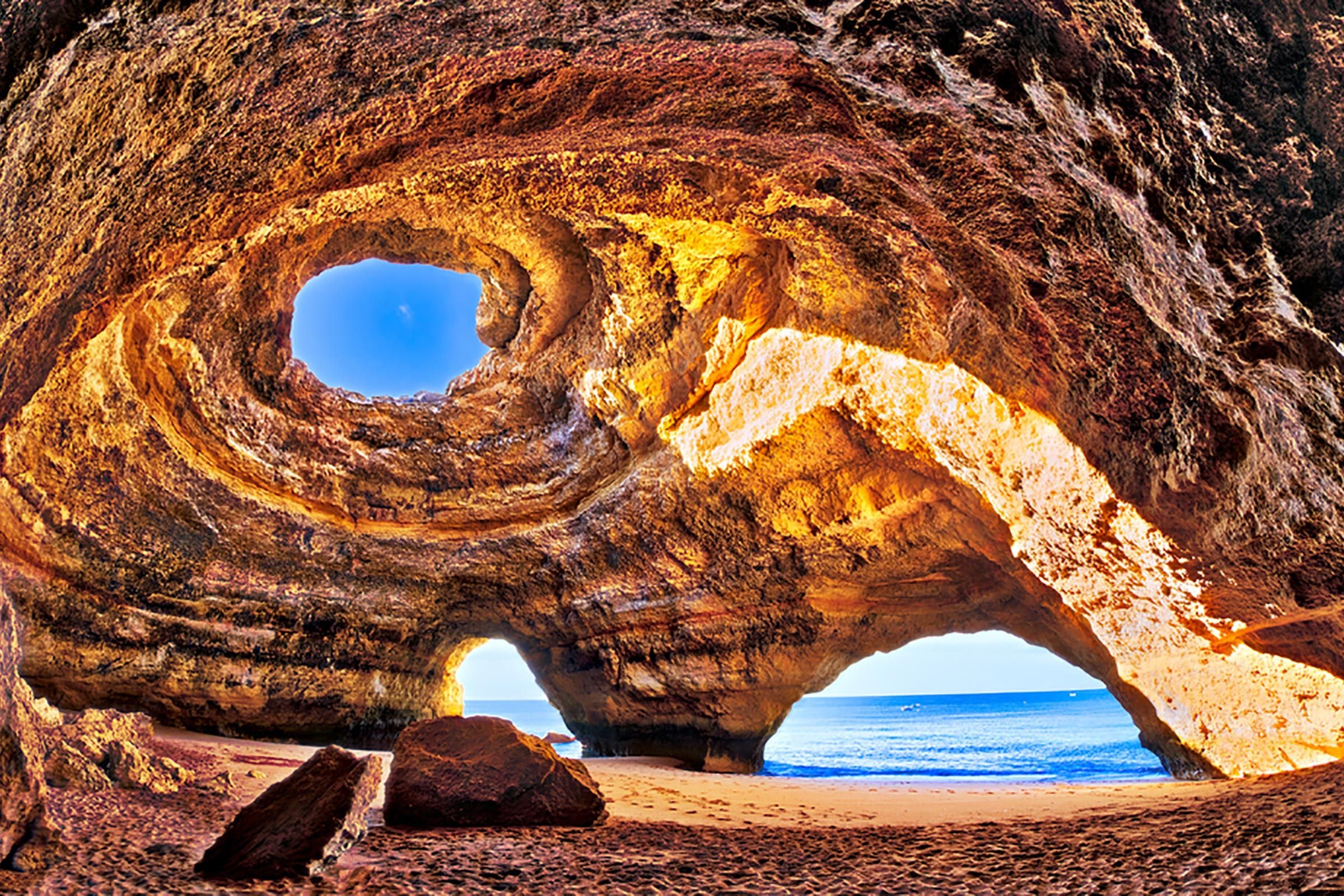 Located in the small fishing village of Benagil on the south coast of Portugal, this gorgeous cave is another well-known sight. Boat tours fill up fast here, so it’s important to book in advance. If you’re a strong swimmer, and it’s low tide, you can even swim into the cave. There, you can take a break and relax on the sand and watch the sun illuminate the water around you. 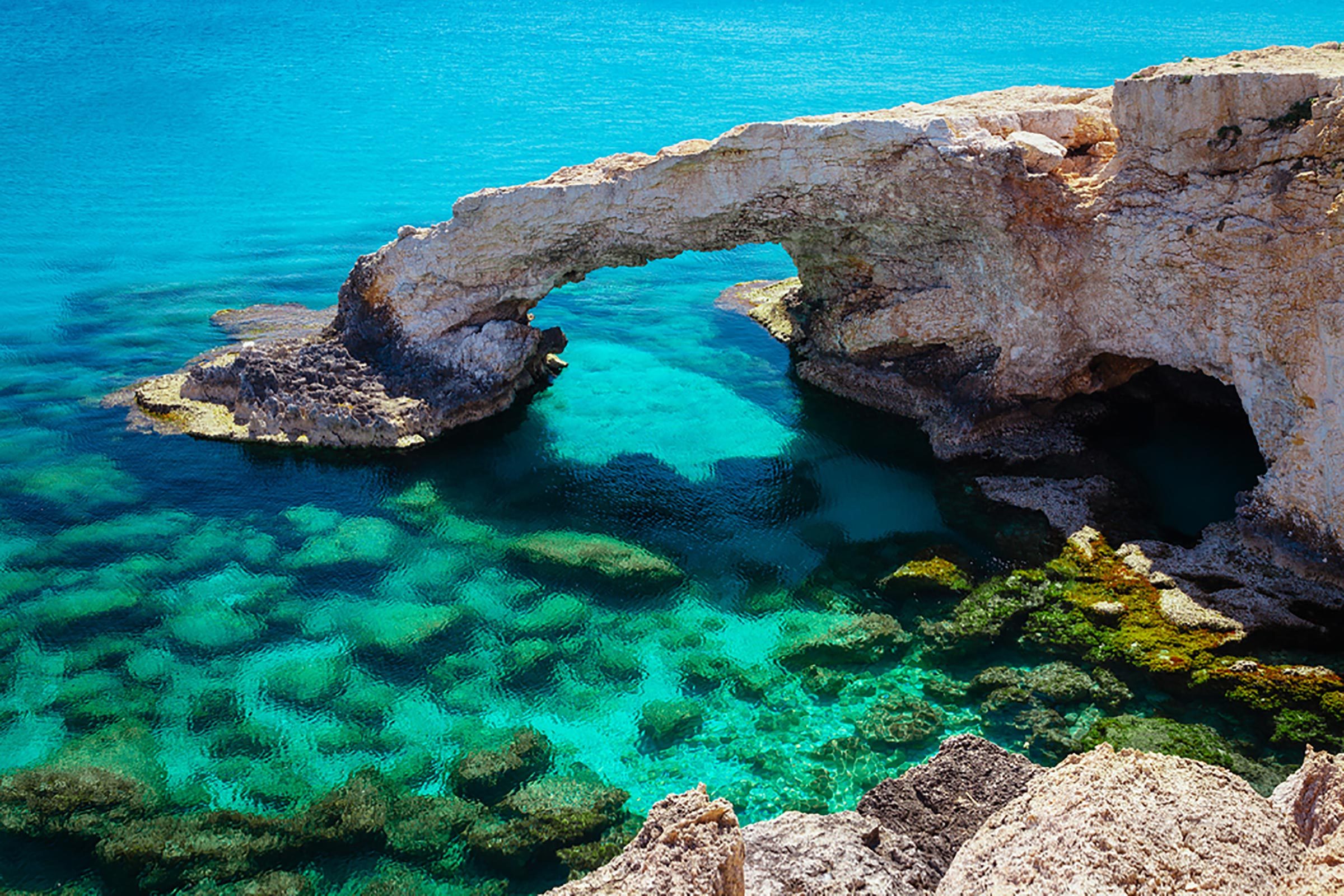 You won’t find yourself bored at the Ayia Napa Sea Caves in Cyprus. The caves are 262 feet long, and it’s full of hidden caves, tunnels, and rock bridges, which can be explored by foot at low tide. The caves’ cliffs are a hotspot for jumping off of, and it’s a great location to fish and catch octopus. Its surrounding crystal clear waters also make it ideal for snorkelers and swimmers. Whether you reach these spectacular caves by boats or the coastal pathway, it’s an incredible sight from land or sea. Check out these gorgeous beaches that have pink sand. 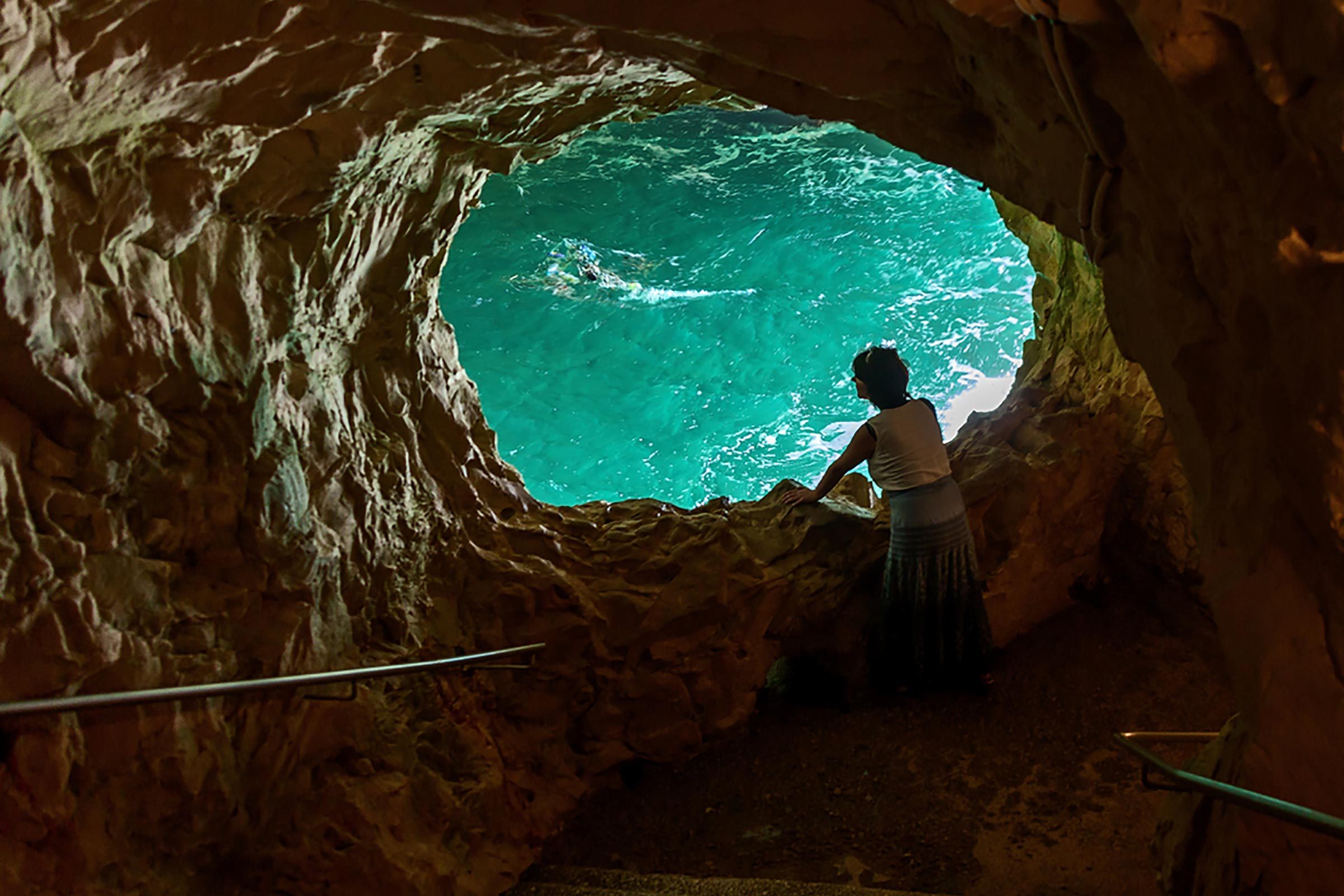 At a whopping 656 feet long, the Rosh HaNikra Grottoes in Israel is a must-visit for cave explorers—and just about anyone, for that matter. Skimming the coast of the Mediterranean Sea, these grottoes are very visitor-friendly. Travelers can take the steepest cable car trip in the world off the edge of a white chalk cliff, where it opens up into the incredible formations and plenty of trails branching off into different directions. 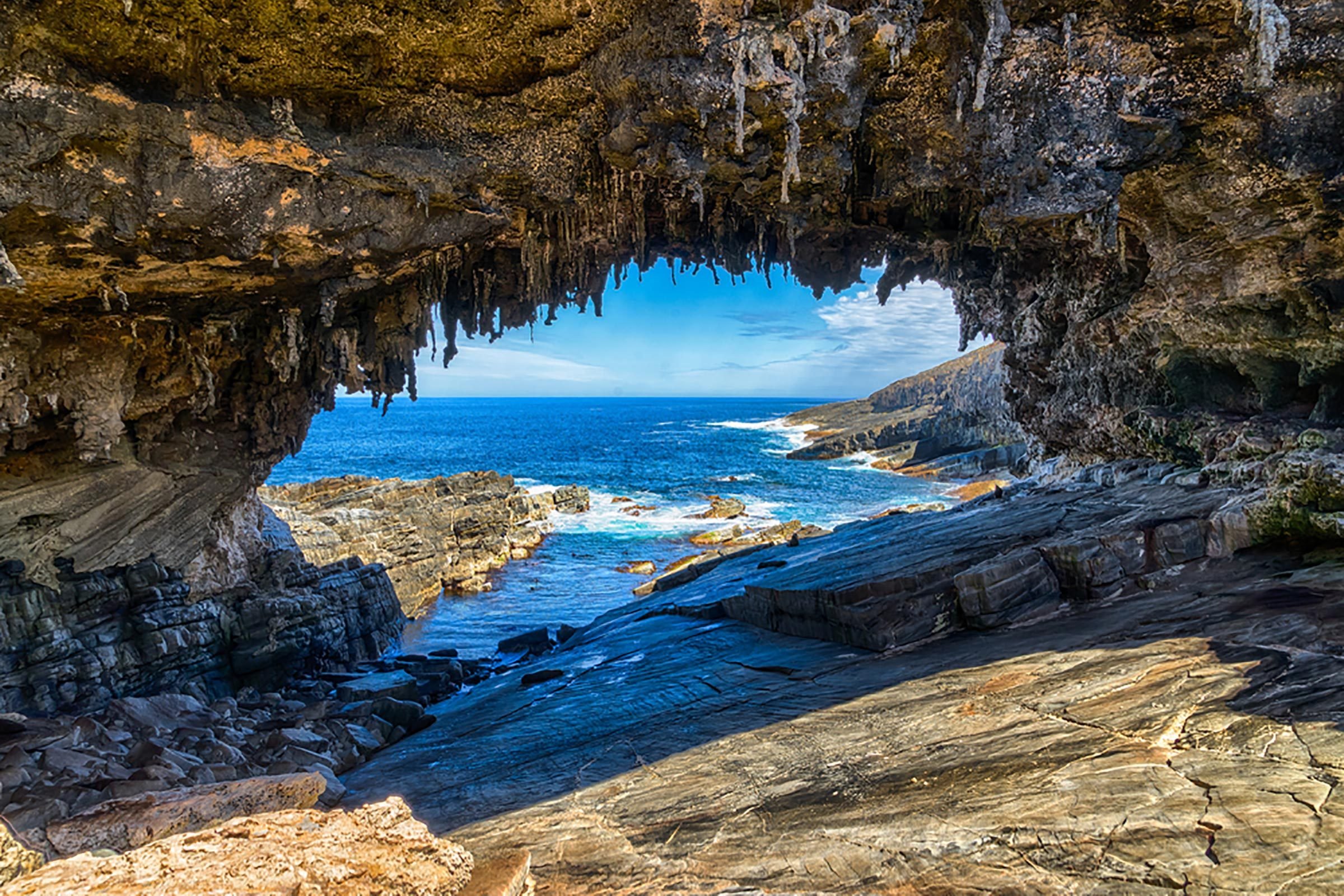 Much like the other sea caves, Admirals Arch in Australia was formed after thousands of years of erosion. Natural stalactites dangle from the ceiling of this gorgeous cave, and visitors can even spend some time with the friendly seals and sea lions on the island. The boardwalk leading to the arch is also full of beautiful scenery. 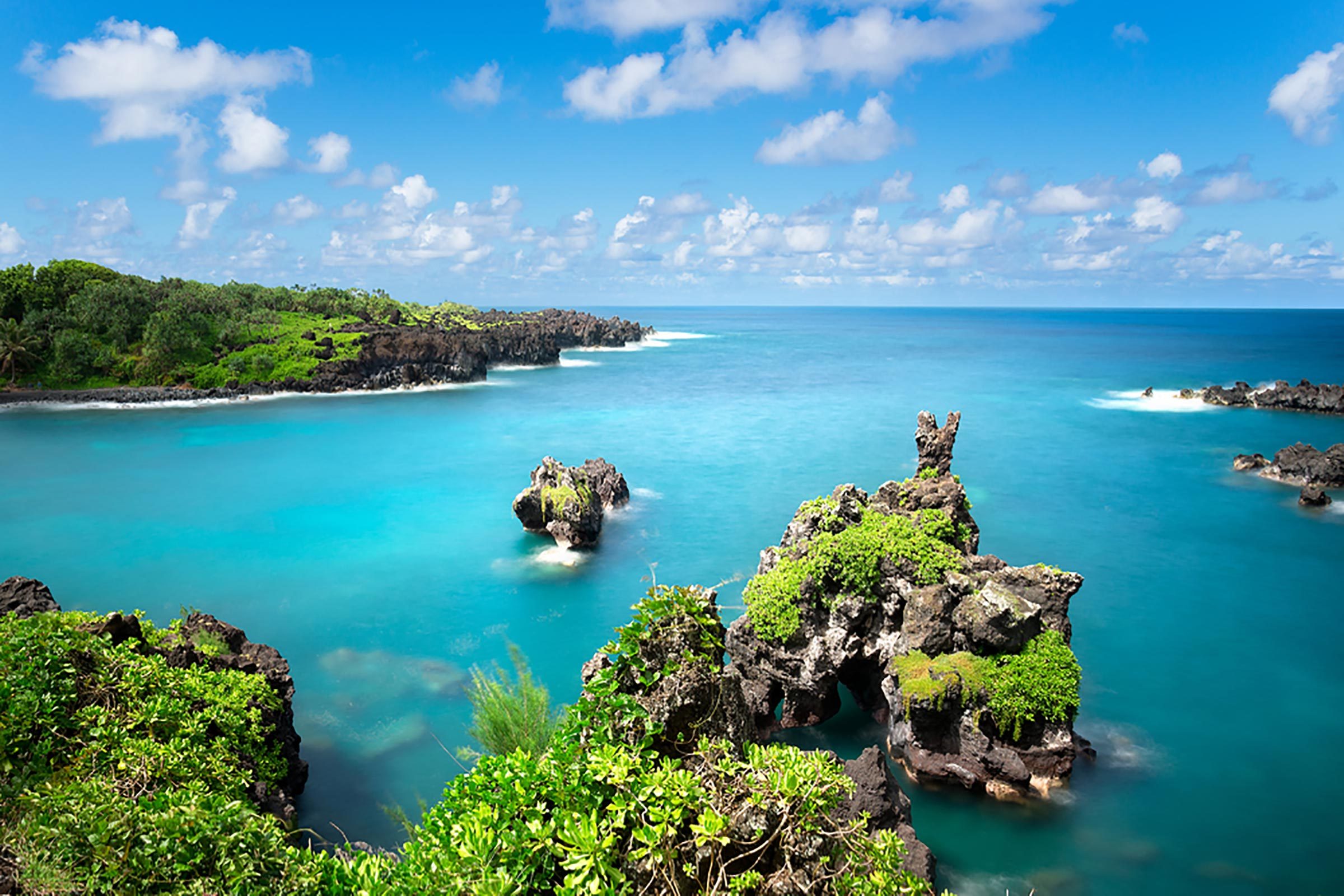 The freshwater caves at Waianapanapa State Park in Maui, Hawaii, are great for a refreshing swim in the crystal clear waters, especially after hiking the trails down to the caves. Visitors can swim in the caves at any time of the day or night, but the best time is between 11 a.m. and 1 p.m. when the sun glistens on the water and illuminates the caves’ walls. Next, check out these natural wonders that you’ve probably never heard of.