Talk about hiding in plain sight...each of these secret spots can be found in a famous landmark you may have visited. 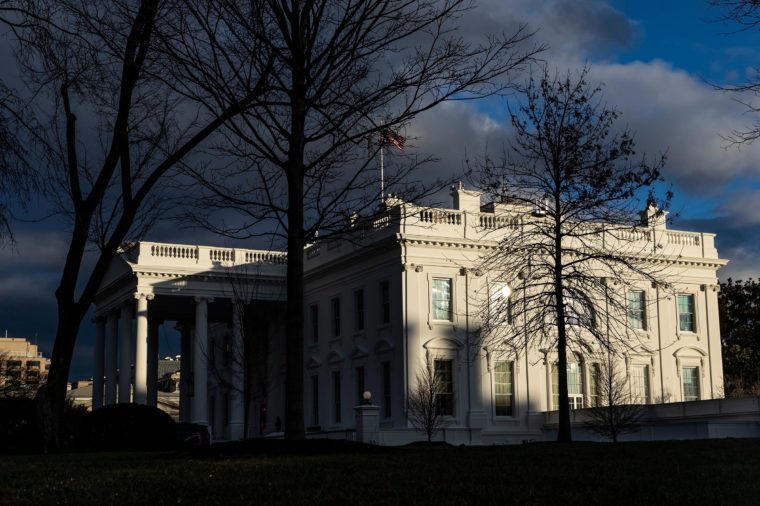 The bomb shelter in the White House

You’d think the White House would have lots of secret spaces, but there’s only one you’re allowed to know about without security clearance, and even that’s not exactly public knowledge. We’re talking about the bomb shelter President Franklin Delano Roosevelt had constructed in the East Wing in December 1941. While he was having it built, “mum” was the word; he acknowledged only that the East Wing construction was under construction. The bomb shelter isn’t the only thing your history teacher never taught you about the White House. 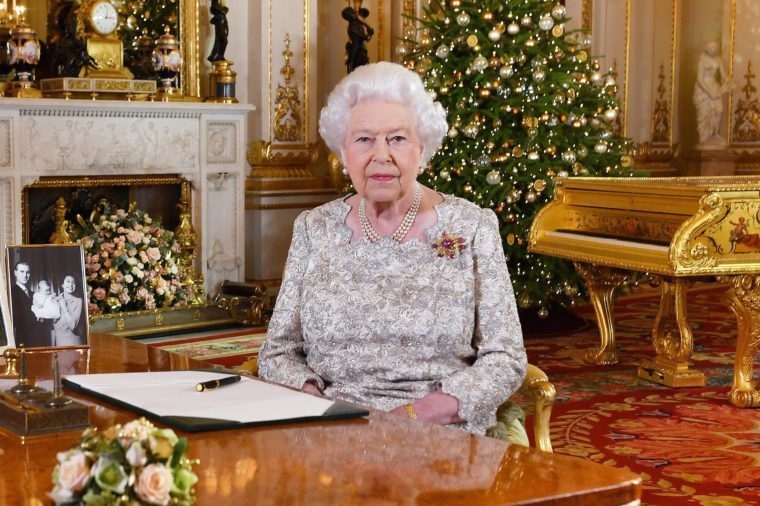 Maybe the reason we associate secret passages with the dwellings of heads of state is that secret passages are pretty much standard fare in royal palaces. For example, Buckingham Palace has a secret door in the White Drawing Room, which connects to The Queen’s private residence. Although the White Drawing Room is open to visitors, the door is not. Even if you can’t visit, you can still enjoy these 12 rarely seen photos of Buckingham Palace. 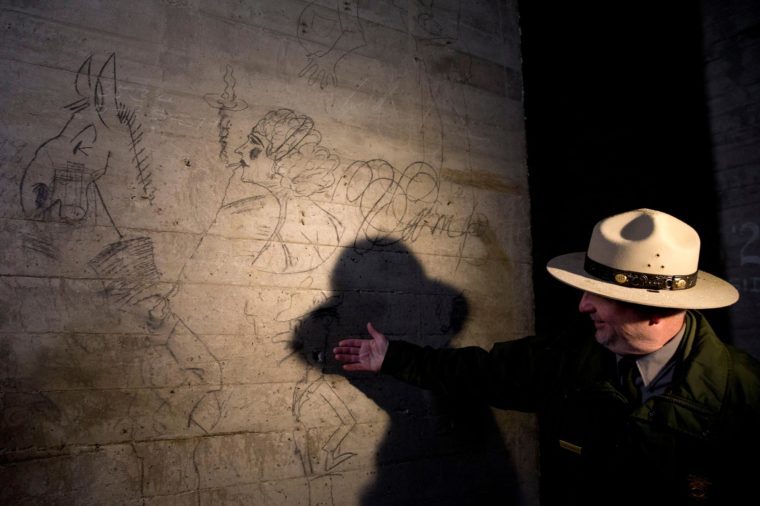 The passageway from the public to the private rooms at Buckingham Palace is just one of the secret spaces Queen Elizabeth II maintains there. In Buckingham Palace, as well as in Windsor Castle, The Queen has had “panic rooms” installed: very small bullet-proof, flame-retardant rooms in which she can hide in case of a bombing or any sort of terrorist attack. Check out these 17 other Windsor Castle secrets. 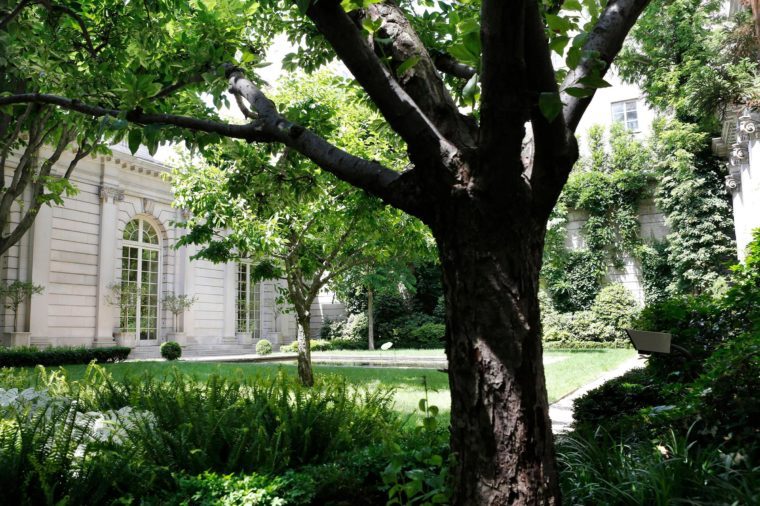 The secret bowling alley at the Frick Collection

There’s a good reason you can’t go into the bowling alley at the Frick Collection (an art museum located in a mansion on Manhattan’s Upper East Side that was once the home of the family of steel magnate, Henry Frick). It has only one exit, and that’s against New York City Fire Code. There are other private rooms in the mansion, but they’re not closed to the public. Speaking of art…and secrets…check out these 13 strangest unsolved mysteries of the art world. 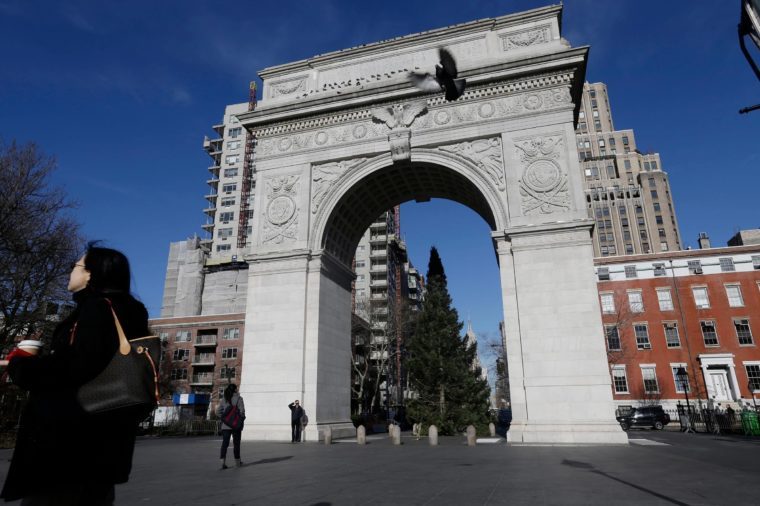 The secret room in the arch at Washington Square Park

The Washington Square Park Arch looks just like the Arc de Triomphe, but here is a major difference: whereas the Arc de Triomphe has an interior that is open to the public (it even includes a museum), the Washington Square Park Arch has an interior, but very few people have ever been inside it, and frankly, from these photos, it looks super-spooky. 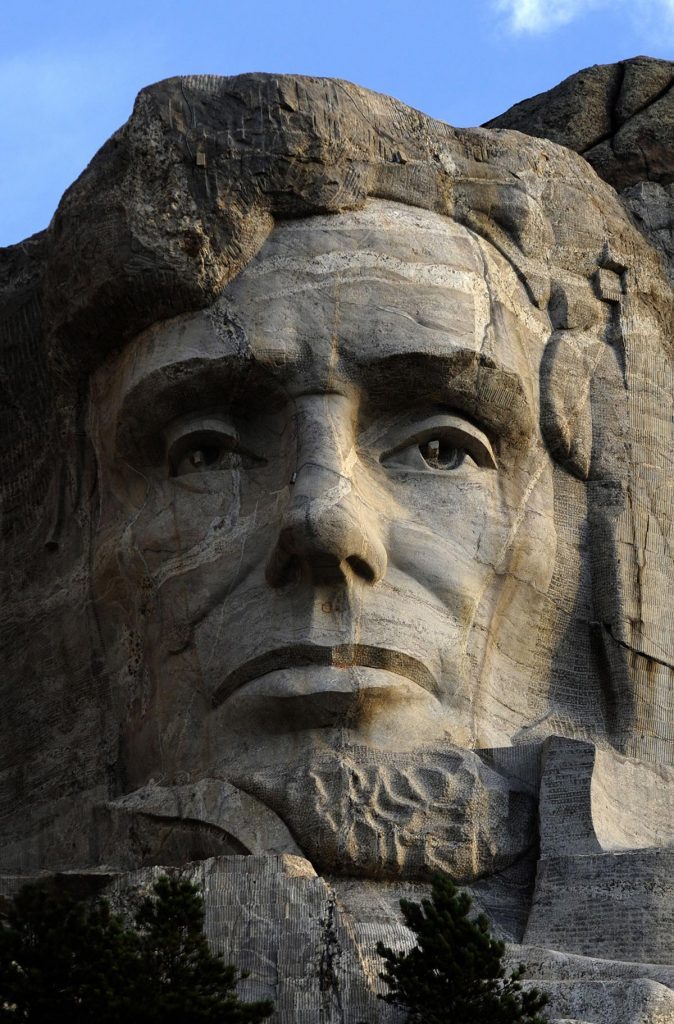 Mount Rushmore in South Dakota is one of the 8 most famous monuments with little-known secrets. The secret it holds is a room hidden behind Lincoln’s head. The room was designed and is used as a “hall of records” that contains copies of the Declaration of Independence and the Constitution. What’s haunting about the secret room is that it the man who designed the monument died before the room was completed, and his original plan—to inscribe a written description of nine important events from U.S. history therein—was never realized. 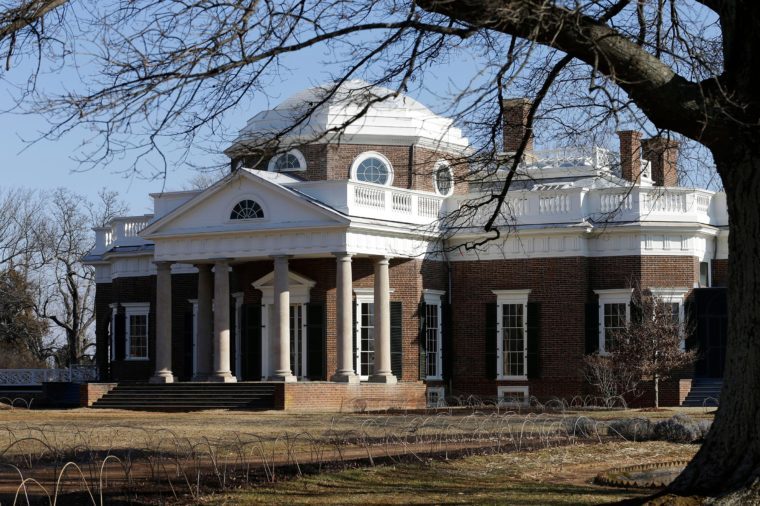 The secret quarters at Monticello

“As part of the $35-million Mountaintop Project restoration to return Monticello to the floorplan it had when [Thomas] Jefferson lived there, archaeologists and restoration experts have been renovating the building’s south wing,” writes Smithsonian Magazine. In the course of their work, they discovered an area beside where Jefferson was believed to have slept, a hidden room. Small and windowless and believed to have been built in 1809, it may have been where Jefferson’s slave, Sally Hemings slept. Whether Jefferson fathered six children with Hemings is one of the 15 most perplexing presidential mysteries. 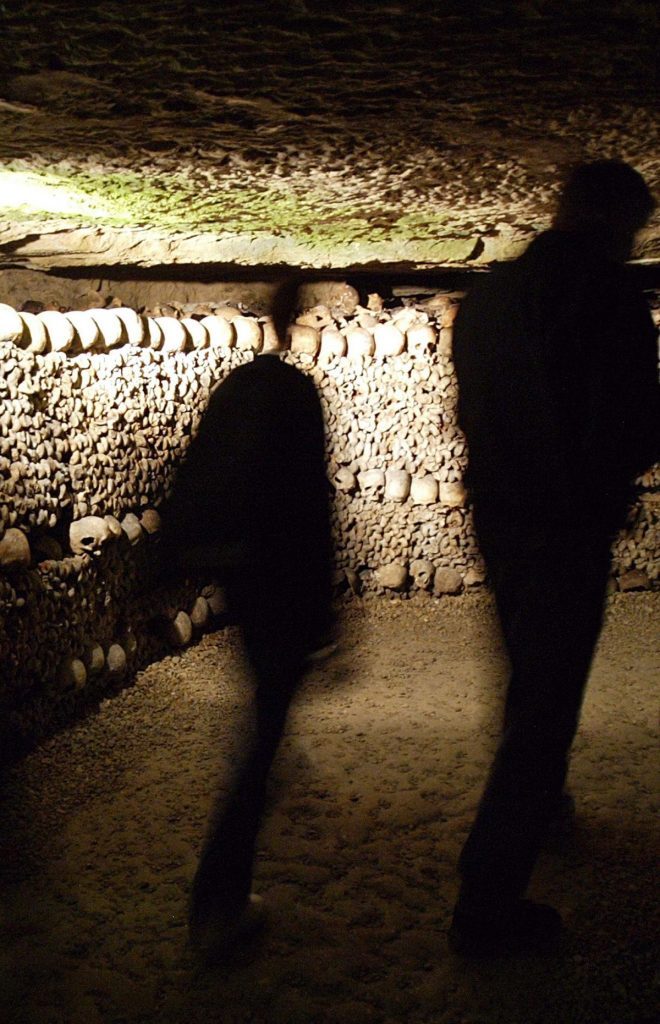 The secret cinema in the Paris Catacombs

Beneath the City of Paris lies 200 miles of tunnels containing the remains of more than six million people who were relocated there from Parisian cemeteries between the 17th and the 19th centuries (because of cemetery overcrowding). The existence of the Catacombs is no secret, but here’s something that had been for quite a while: someone, or a group of someones, had secretly (and illegally) built an underground cinema and an adjoining restaurant. The police discovered the space in 2004, and a group called the Perforated Mexicans came forward to claim it as their work. 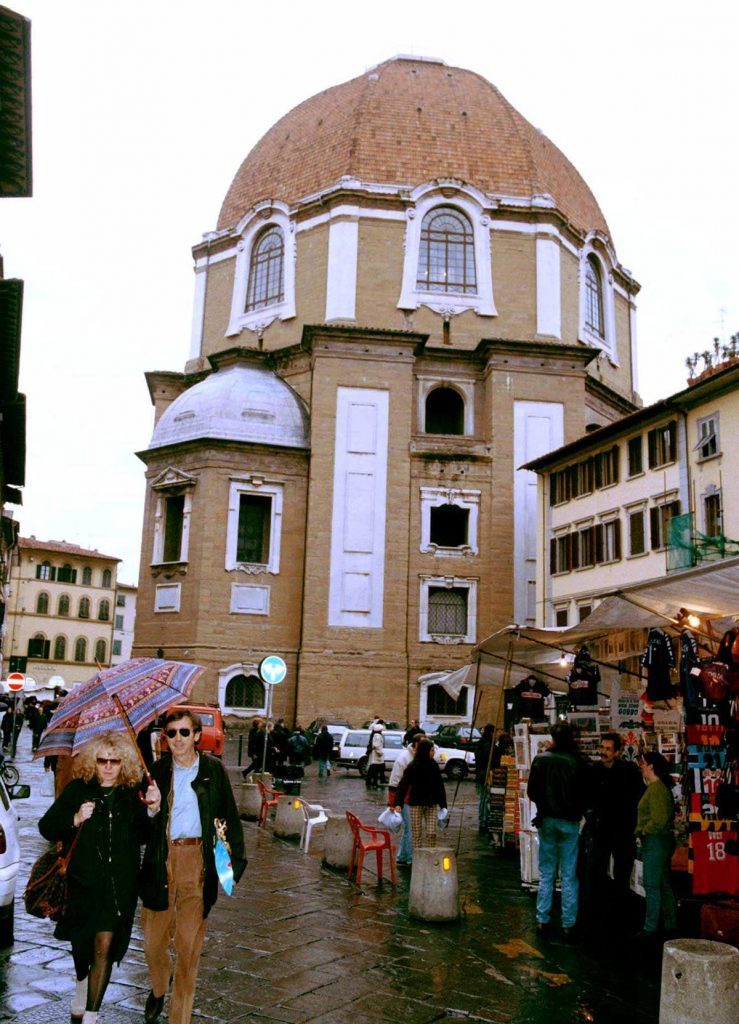 The secret room in the Medici Chapels

In 1975, the then-director of the Medici Chapels museum in Florence, Italy was searching for a new exit route for visitors and stumbled upon a trapdoor beneath a closet. Further investigation revealed sketches and even doodles on the walls. Although unsigned, their style suggests the hallmarks of Michelangelo’s “signature style,” according to Conde Nast Traveler. The room has been closed for renovations ever since, although plans are underway for it to open to the public in 2020. 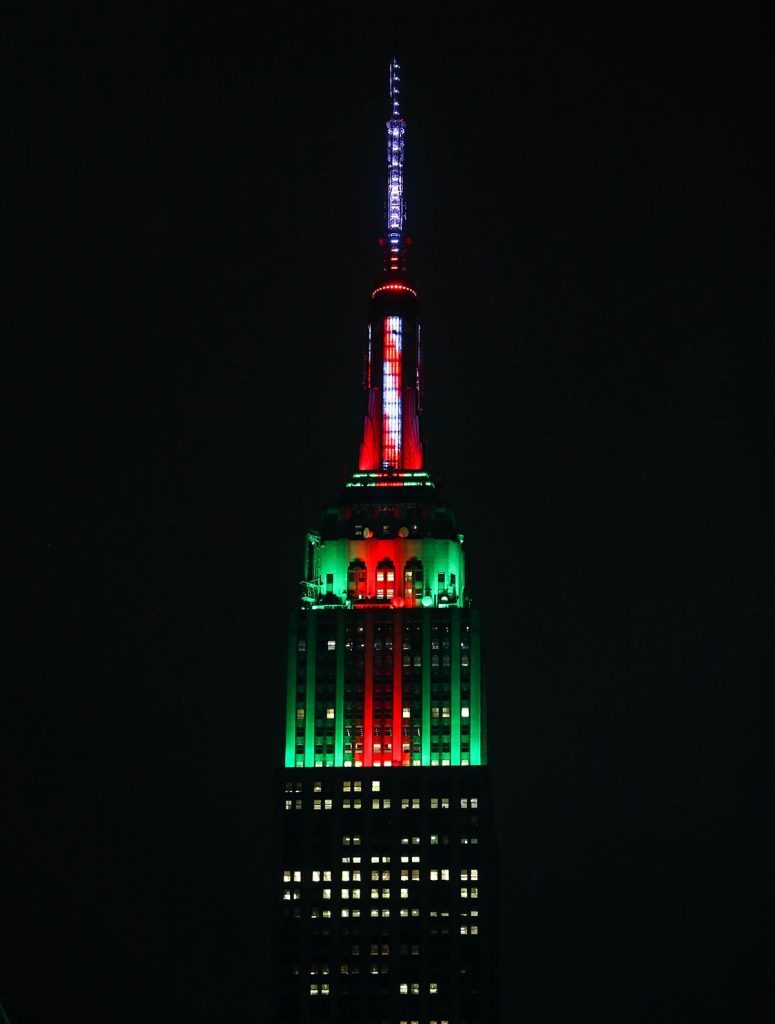 The observation deck on the 103rd floor of the Empire State Building closed to the public unless you’re someone super important. According to the building’s own fact sheet, “VIPs, celebrities, and dignitaries” are allowed “exclusive access,” to the top floor. Recently, Taylor Swift was allowed to take and model in photos from the almost secret room to promote her single, “Welcome to New York” according to Travel + Leisure. 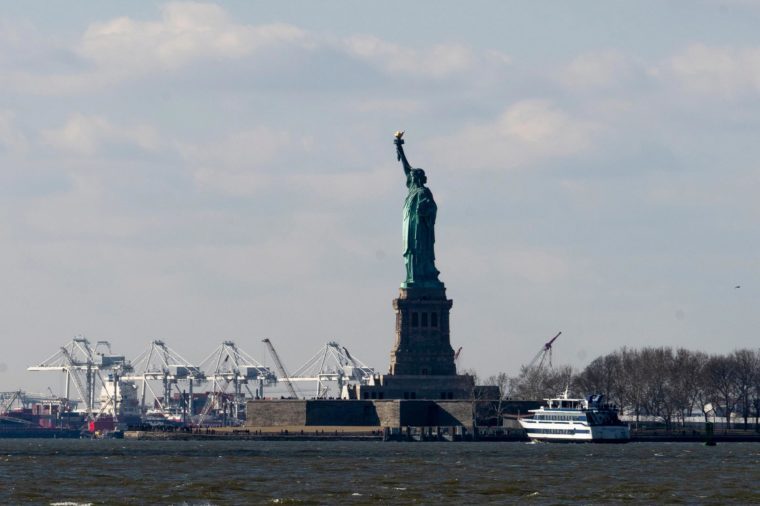 The room in the torch at the Statue of Liberty

There’s a room inside the Statue of Liberty‘s torch, but the room has remained almost entirely closed since July 30, 1916, the day of the “Black Tom” explosion. This act of sabotage by German agents during World War I involved blowing up munitions housed in a warehouse on a neighboring island in the New York Harbor, damaging the Statue, and especially the torch. The only people who’ve been in it since are National Park Service Staff who access it via a 40-foot ladder. There are no plans to reopen the torch, due to terrorism fears. 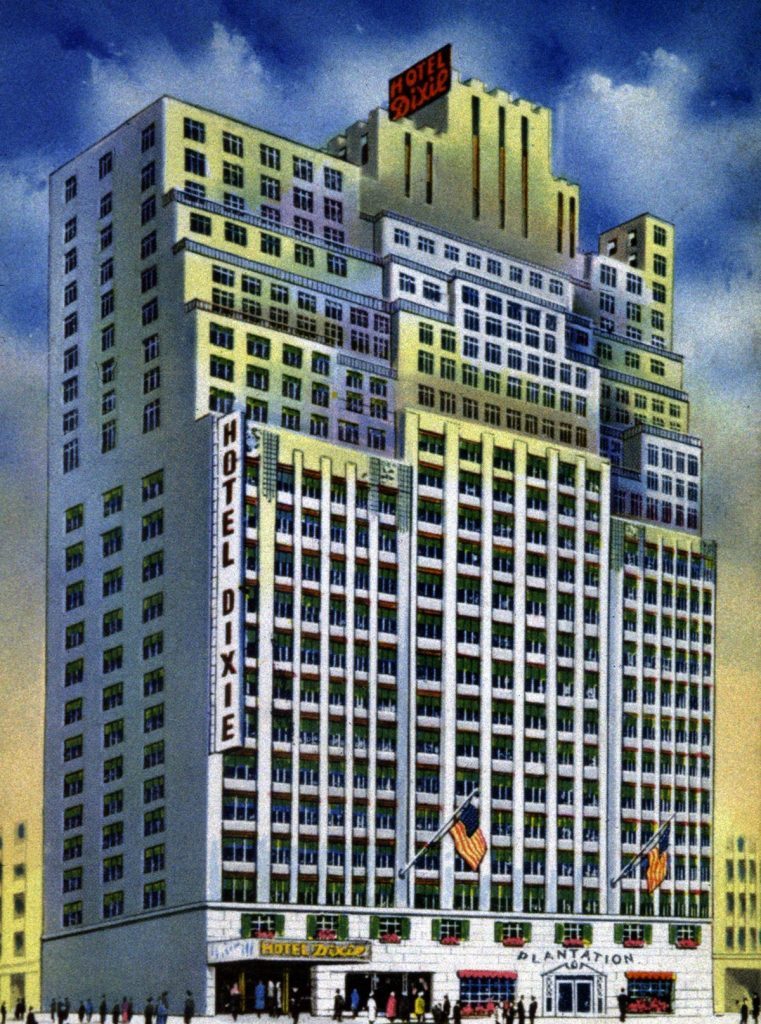 Secret bus station at the Carter Hotel in NYC

Inside the Carter Hotel, an arguably seedy hotel in New York City’s Time’s Square, lies hidden a nearly century-old bus station. Built in the 1930s, when the Carter was known as the Dixie, the Central Union Bus Terminal was built partly underground. “After descending underground, buses would rotate on a 35-foot turntable, then proceed into a designated berth,” explains Scouting New York. It’s now a parking garage, but if you venture down there, you’ll still be able to find that turntable. 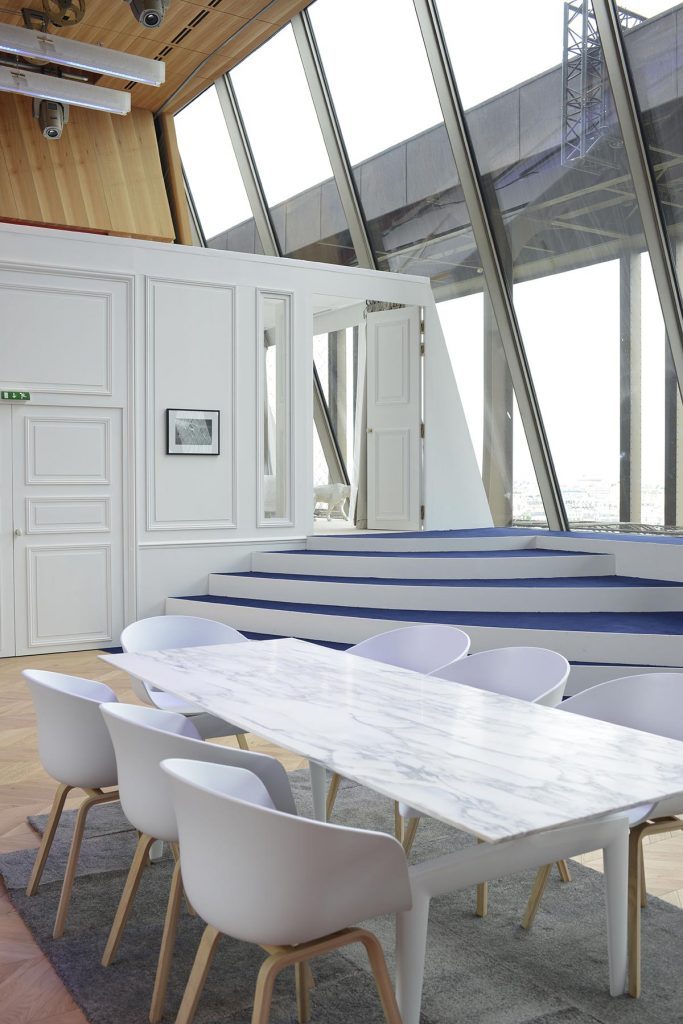 The hidden apartment inside the Eiffel Tower

Well, Paris certainly seems to have its share of rooms hidden in the plain sight of famous landmarks. This third one on this list, the hidden apartment on the third floor of the Eiffel Tower, was constructed by the architect of the tower, Gustave Eiffel as his own private apartment. It’s not such a secret anymore because it’s now it’s available for the public to tour. But according to Architectural Digest, while Eiffel was alive, he kept the place pretty tightly locked down. Check out these 19 fun facts about the Eiffel Tower.