13 Signs You Should Think Twice Before Adopting That Shelter Dog

You need love, that dog needs love… What could go wrong? Lots. Don't judge shelter dogs by their looks and be sure to consider the information staffers have to share about a pup's history and behavior. Here are some points to consider. 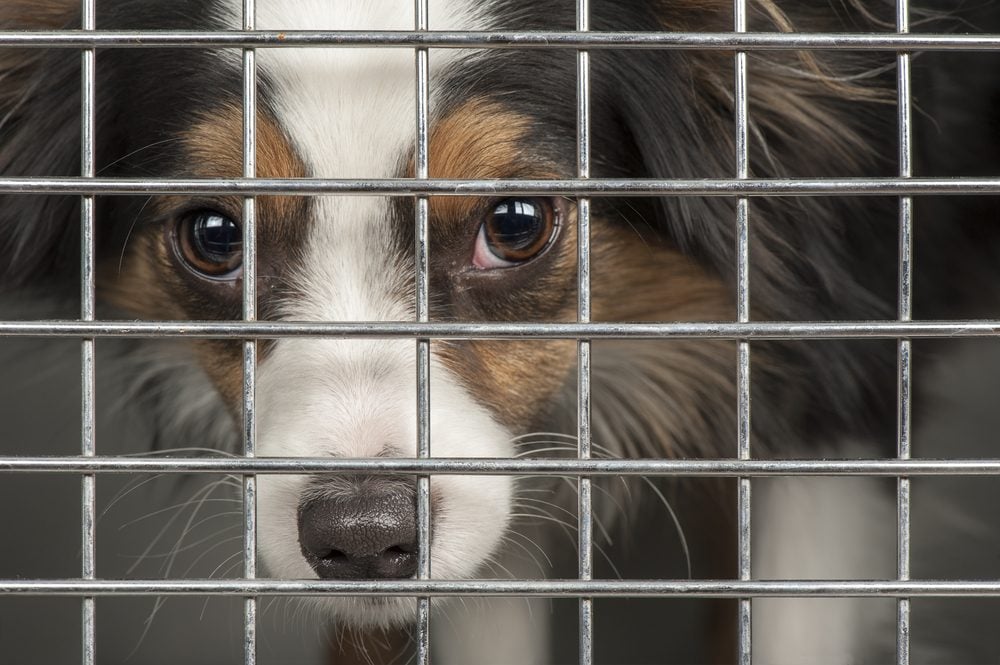 She seems shy at the shelter

It could mean that the dog is afraid of people. Then again, it could mean that the dog is stressed out by the shelter environment (so many dogs, so much noise). Laura Chavarria, executive director of the Nashville Humane Association, suggests that you take the dog for a walk and interact with it in a quiet place away from the shelter, where you can get a better feeling for whether you’re bonding. “Some, with basic care and love, blossom and that fear subsides,” she says. “Others have more deep-rooted fears.” Fearful dogs will require extra training and vigilance that can be stressful and time-consuming. Here are 15 questions to ask before adopting any shelter dog. 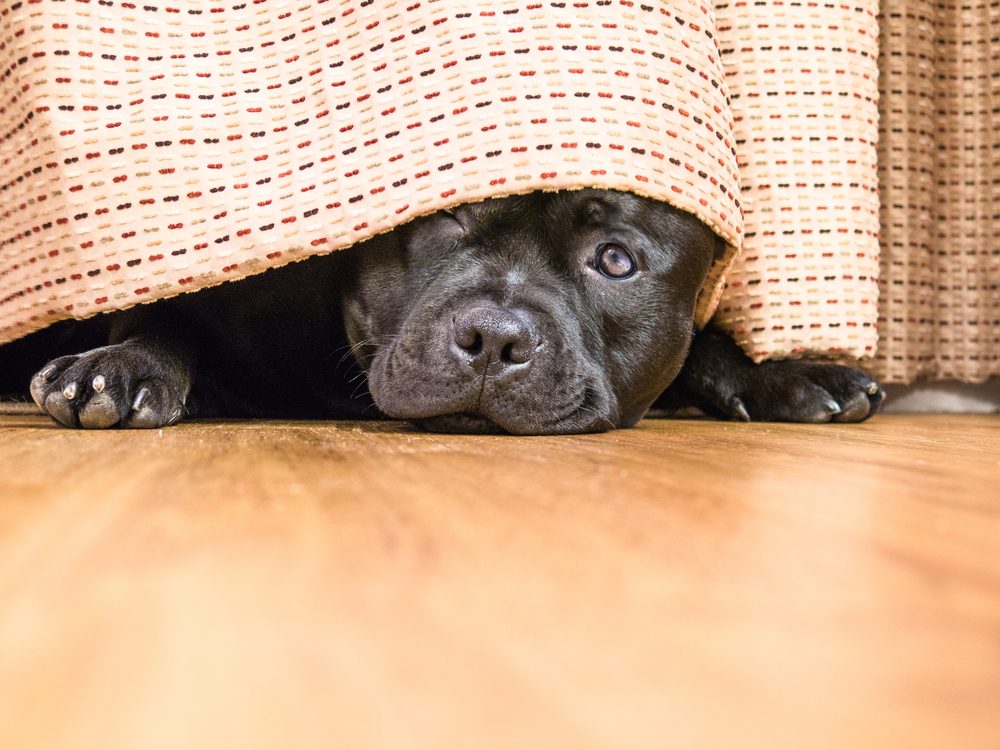 If your children are small, you want a dog that’s pretty unflappable. “What you should look for is a dog that prefers kids to adults,” says Trish McMillan, a professional dog trainer who spent nearly eight years working with the ASPCA’s New York City shelter and currently co-chairs the International Association of Animal Behavior Consultants’ Shelter Division. “If you go into the room with it and it runs straight to the kids and acts like, ‘oh my god you have tiny people, I love tiny people,'” that’s a dog that will get along well with your family. She says that, on the other hand, if the dog cowers under a bench in the shelter meeting room the whole time, it might be a great dog, but it’s probably not the one parents of toddlers will want to bring home. “Many shelter dogs have lived with kids and loved them, so pick one of those,” she says. Chavarria points out that shelters often have good information about dogs’ histories, and can tell you if they’ve lived with children before, either in previous homes or in foster situations. These are 18 of the best dog breeds for kids. 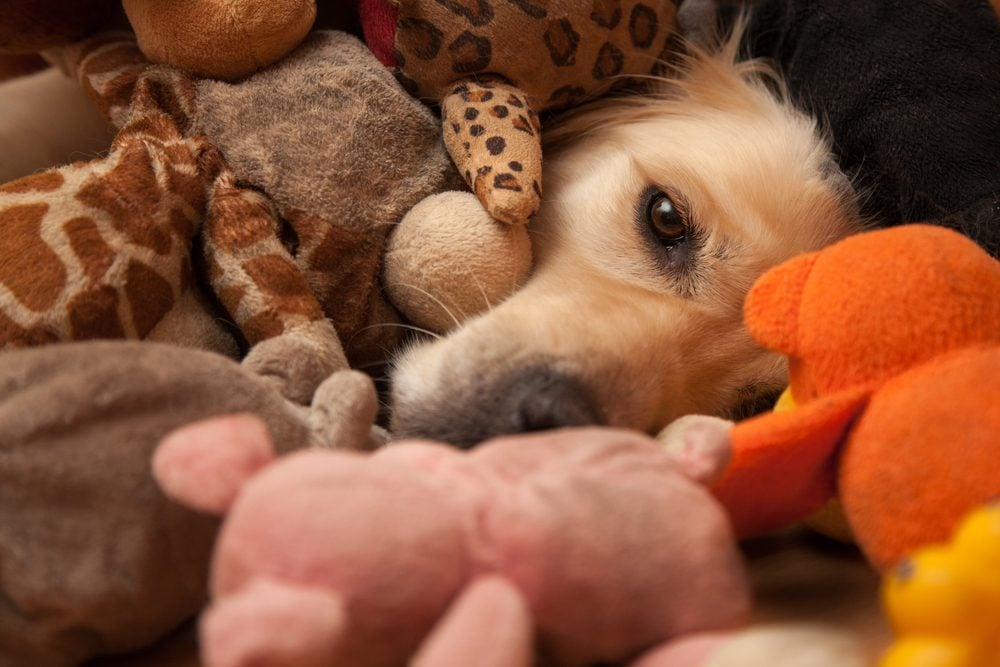 She won’t let you near her toys or food

This is called resource guarding, and it’s pretty common behavior for dogs—they might growl or snap at someone who gets too close to their special treat or chew-toy. For families without young kids, this won’t necessarily be a major problem, but if you have little kids you should not adopt a dog that’s possessive in this way—you especially don’t want to get in a situation where a dog decides a child’s toy belongs to her. Chavarria and McMillan both point out that dogs’ behavior often changes when they leave a shelter—there are studies that show lots of dogs who exhibit resource-guarding in the shelter don’t have a problem with it once they’re in a home. However, because you want to be extra-sure a dog won’t react to a small child, it’s best to look for one that doesn’t get tense or upset if you borrow its toy for a few minutes. 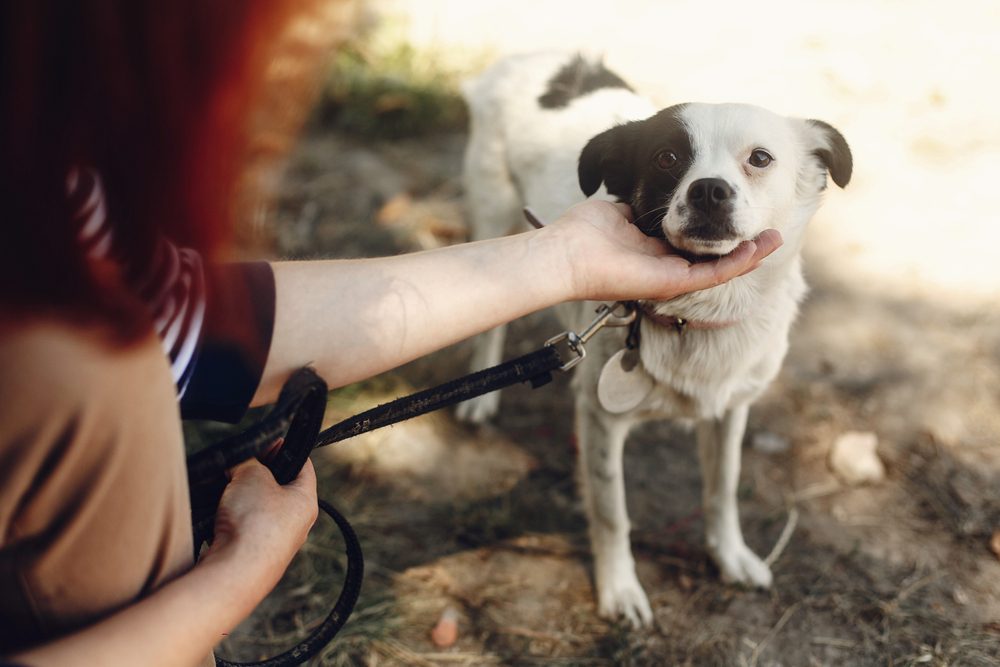 He doesn’t want to be touched

Again, especially if you have kids, you want a dog that really likes being handled. “You want a dog who, when you touch it, it’s just melting into you,” McMillan says. “They’re like ‘oh my gosh, this is so awesome.'” McMillan says that most dogs don’t like being hugged, but they’re bound to be on the receiving end of some awkward petting in a living situation with little kids, so you want to make sure they’re OK with it. “The warning sign is if you go to pick up its paw and it whips its head around and gives you a hard stare,” she says. “Or the pup is avoidant and tries to get away from you while you’re touching it.” Chavarria says that at the Nashville Humane Association, dogs that react to touch are medically evaluated first to make sure they’re not in pain, and then they’re sent to spend time living with a trained foster caregiver. “Nine times out of ten, we see that behavior go away, if it’s truly behavioral, in a home environment and with a skilled foster working on it,” she says. These are the 14 things you do that dogs actually hate. 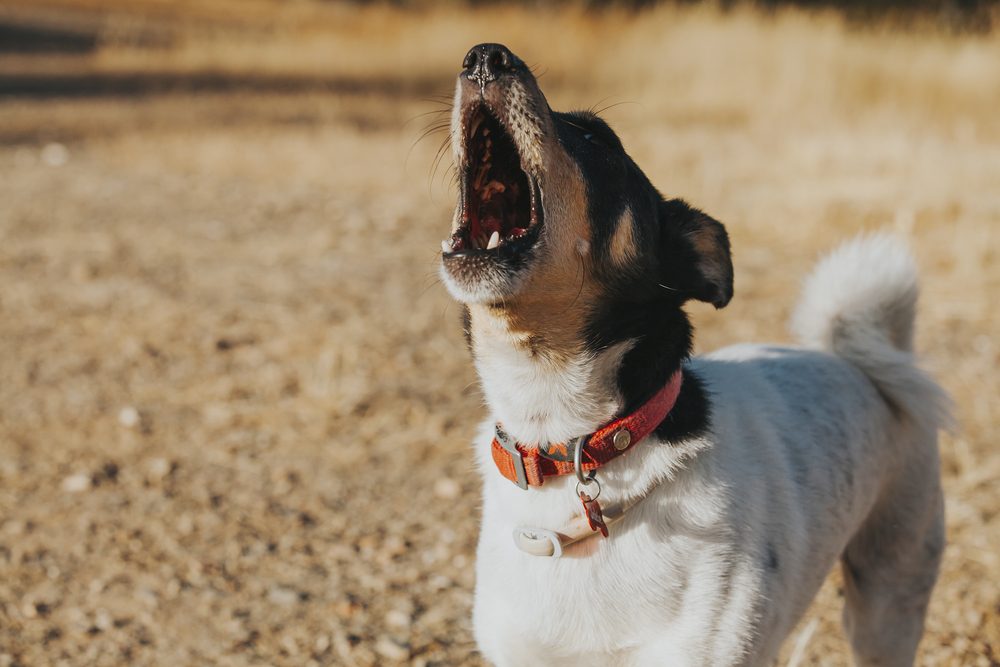 She barks a lot

If you live in an apartment or other situation where barking will be a problem, you should try to find a dog that isn’t so vocal. The problem is that it’s difficult to predict what a dog will do when you get it home. “Dogs may be more vocal in a shelter setting because they want attention, are uncomfortable, etc.,” Chavarria says, and they’re quieter when they’re settled into a stable living situation. Then again, she adds, “We’ve also seen the opposite. A quiet dog at the shelter may become more confident at home and more vocal.” Check out these 20 things to consider before adopting a dog. 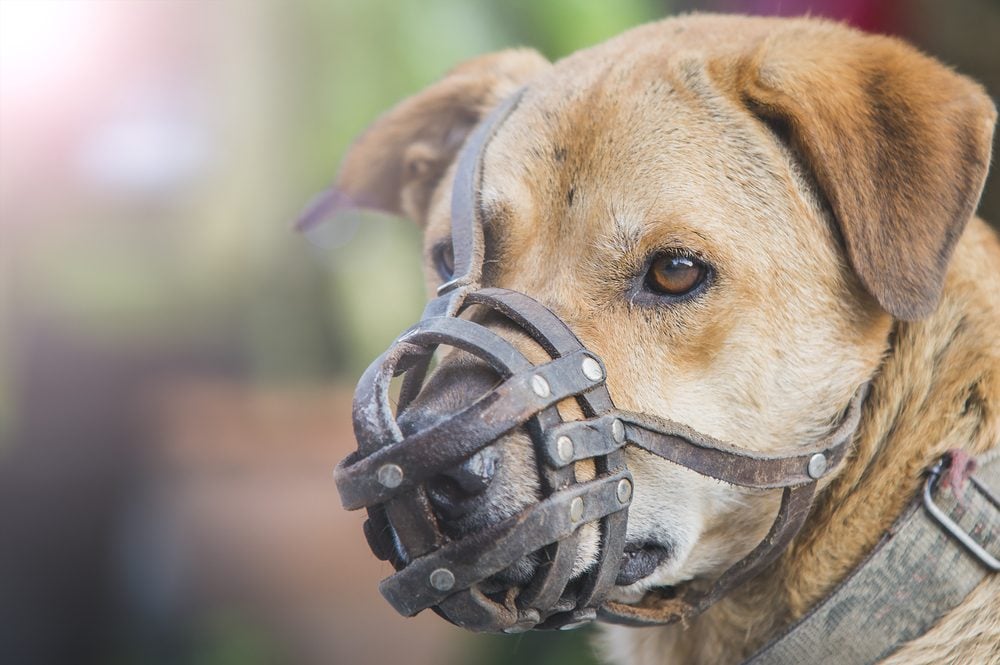 A responsible shelter won’t offer a dangerous dog up for adoption, and even if staffers determine that a dog is not dangerous, they should be open about its history. “At Nashville Humane Association, we are completely transparent with any medical or behavioral information that we are aware of,” Chavarria says. “We don’t ever want to set up an animal or an adopter to fail.” Make a point of asking about the full history of any dog you’re considering taking in. McMillan makes the point that shelters consider the circumstances. “There are bites, and there are bites,” she explains. If a dog bit someone because he was in pain from an injury or when he was coming out of anesthesia after being neutered, it’s not necessarily a concern. 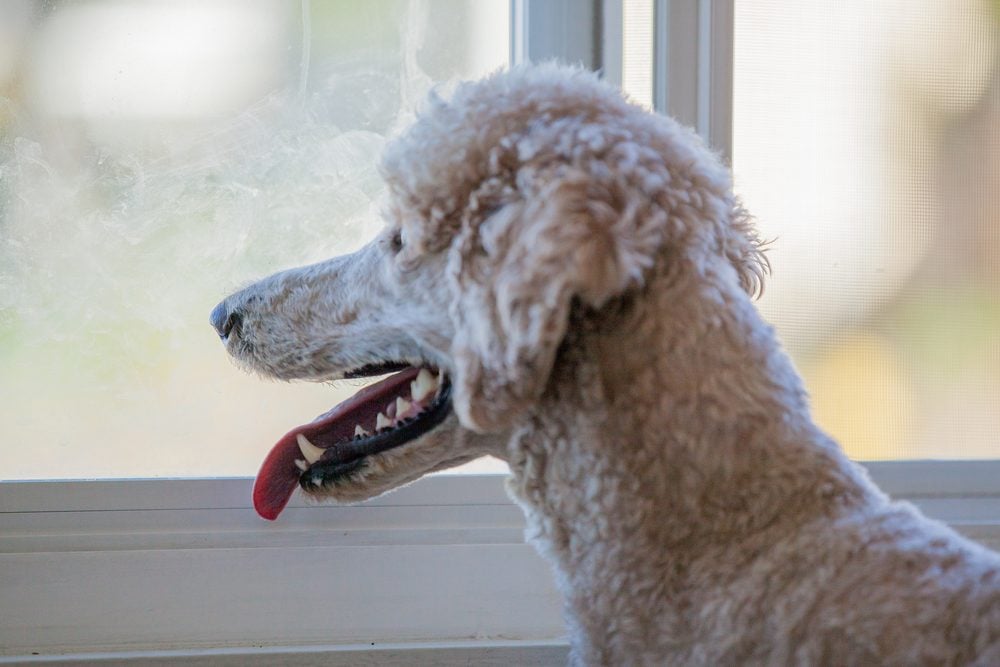 She has separation anxiety

Unfortunately, it’s very difficult to tell from a dog’s demeanor in a shelter situation whether she’s going to suffer from separation anxiety, which means she gets very upset when you leave her alone. It can be a real problem, especially if you work long hours away from home. “The best predictor of behavior in a future home is behavior in a past home,” McMillan says. “If it jumped through second-story windows trying to get to a past owner, it’ll probably do it in your home too.” She points out that there are new protocols and treatments for dogs with separation anxiety, so if you do adopt a dog who starts freaking out when she’s alone, you should seek help. Here are some smart ways to keep your pet busy while you’re at work. 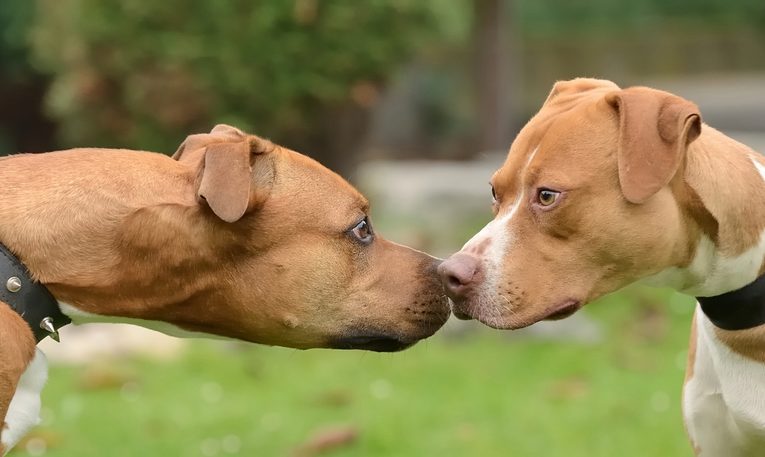 He’s aggressive with other dogs

Even if you don’t have other dogs at home, a pet that reacts badly to other dogs can be a problem—it won’t be possible for friends to bring dogs to visit, it can make walks unpleasant, and it’s not fun worrying that if your dog slips out an open gate he might start a fight with a neighborhood dog. If you do already have a dog, you’ll want to make extra-sure the new addition will get along with it. McMillan says one of the best ways to determine whether a new dog is comfortable around other pups is to adopt from a shelter that runs playgroups. “Some shelters will let you come and watch a playgroup, which is a great way to pick out a dog-friendly dog,” she says. Here are 14 things animals in shelters wish you knew. 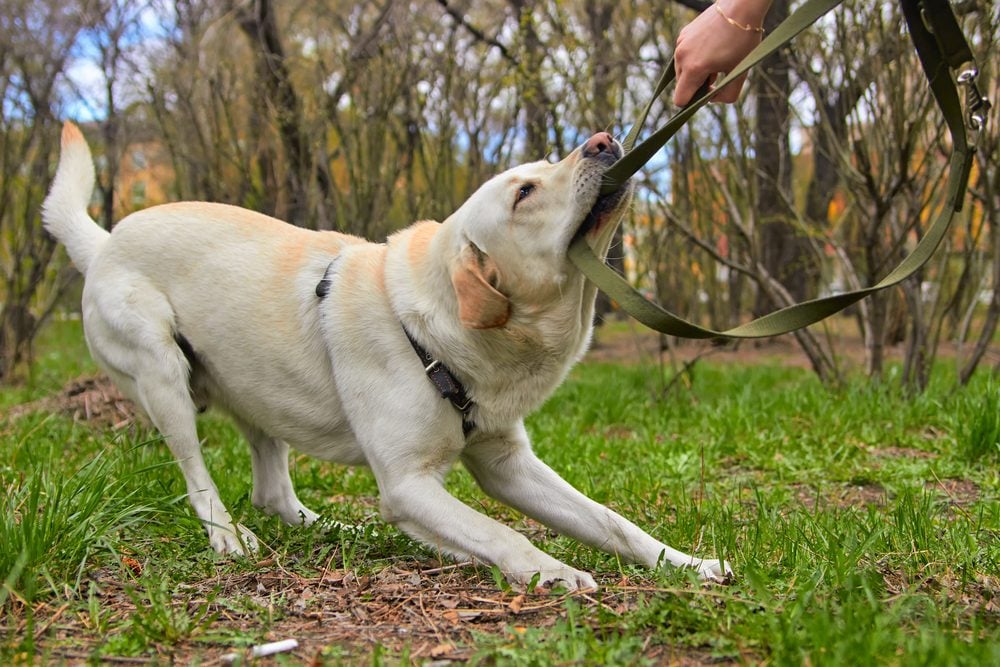 She doesn’t know how to walk on a leash

If a dog pulls really hard or jumps when you hook a leash to her collar, it will be difficult to take her for walks. “This isn’t their fault,” Chavarria says. “Some dogs in our care were never walked on a leash.” Usually, this can be remedied with either leash-training or the right type of collar or harness, but (especially if you’re considering a large dog) make sure you’re strong enough to walk her safely in the meantime. Here are 15 secrets dog trainers won’t tell you for free. 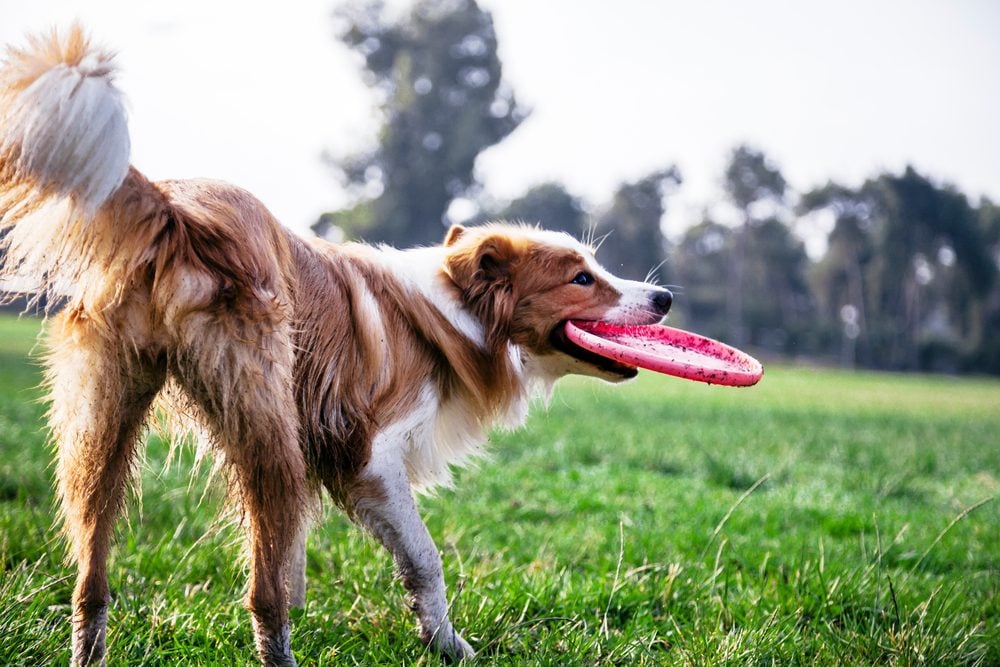 He’s going to need a lot of exercise

Have your eye on a lovely Labrador or terrier? Be sure to talk to shelter staffers about how much exercise an athletic dog is going to need, and consider whether you can make it happen. If you don’t think you’ll be able to do it yourself, consider spending some money on dog daycare programs or ask a neighbor who runs whether he’d like to bring your dog with him. If you really want a nice, lazy dog that will enjoy lounging around the house, think about adopting a Greyhound. “They are 40-mile-per-hour couch potatoes,” McMillan says about the typical specimen. “They want to lie down, they’re OK with a smaller yard, they’re pretty laid-back dogs, but they’re huge.” Read about 50 things that make your pet tick. 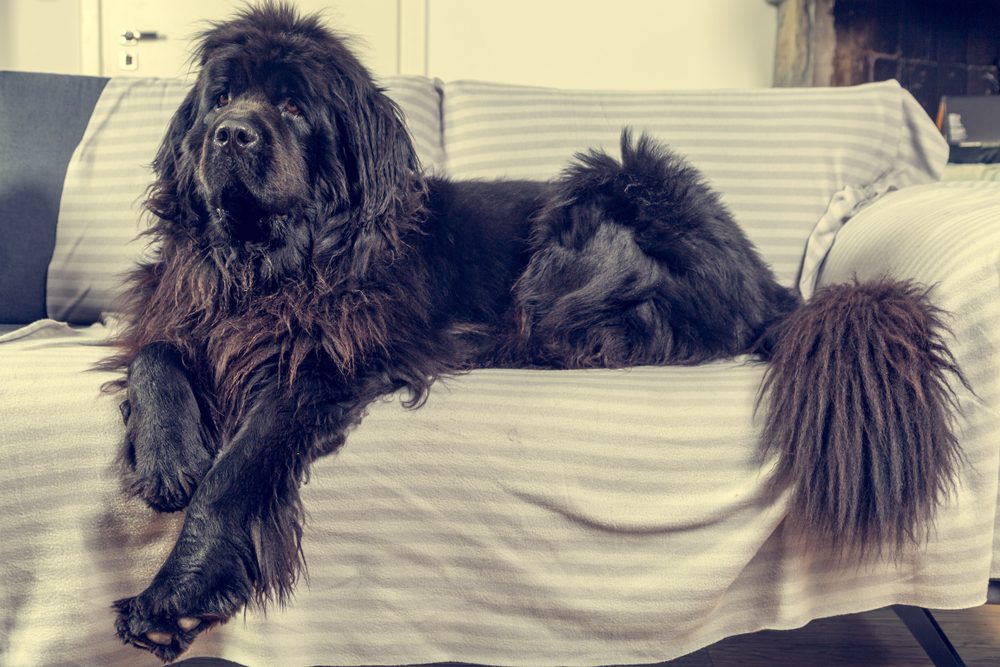 Greyhounds can weigh more than 80 pounds, and other large breeds like Great Danes and Newfoundlands can easily top 100 pounds. You won’t necessarily need more space in your house or yard for large dogs (“A lot of giant breeds are pretty lazy,” McMillan says), but be aware that if it gets sick or injured, it might be hard for a small or unathletic owner to load the dog into the car for a trip to the veterinarian without help. Find out more reasons a large dog might be the best pup for you. 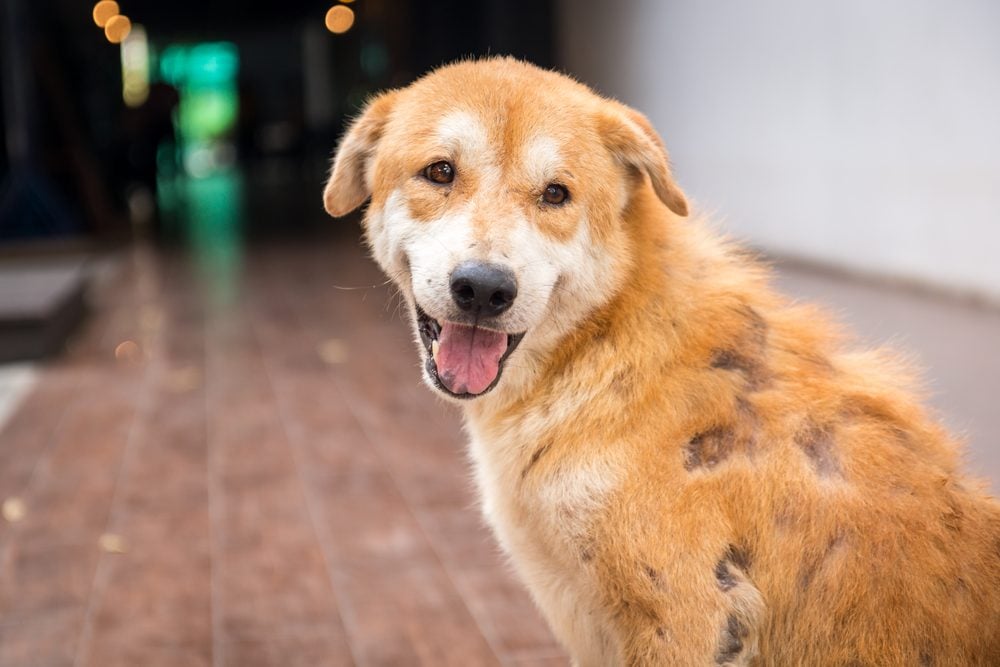 Talk to shelter staffers if a dog has bald spots—they probably already know what’s causing it. “It can be anything from demodectic mange to allergies, or it may just be stress,” McMillan says. Mange is really easy to treat with medication, allergies might be more complicated to figure out (though they’re often caused by flea bites), and if a dog is extra-stressed by the shelter environment causing him to bite or lick his skin, that behavior might go away naturally when he gets into a better living situation. “I wouldn’t let a rough appearance put you off,” McMillan says. 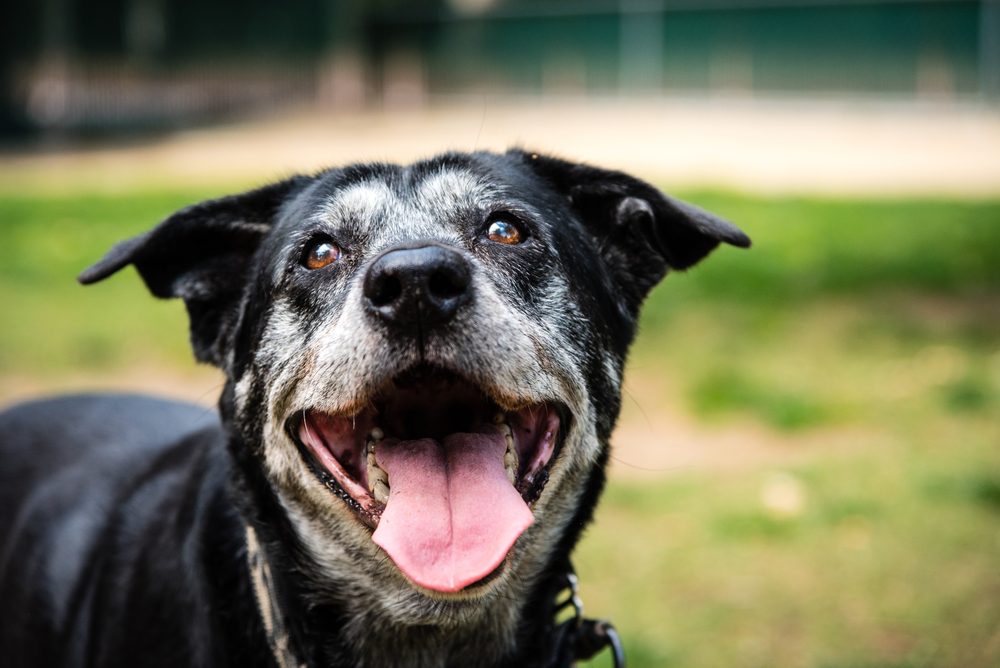 Many people feel nervous about adopting a dog that’s a few years old because they worry they won’t have enough time with it before it crosses the rainbow bridge. But McMillan thinks that concern is outweighed by the benefits of adult dogs: Their personalities are fairly well-established by age two or three (“what you see is what you get,” she says), and by age five or six, even the most athletic dogs start to require a little less exercise and stimulation. “I definitely encourage people to look at older dogs,” McMillan says. Read on for 19 dog adoption photos that will melt your heart.