15 Slang Words You Didn’t Know Were in the Dictionary

English is an ever-evolving language, so as words make their way into the mainstream, they also make it into the dictionary. Here are some surprising slang terms that with their recent addition to the dictionary are now, like, totally legit. 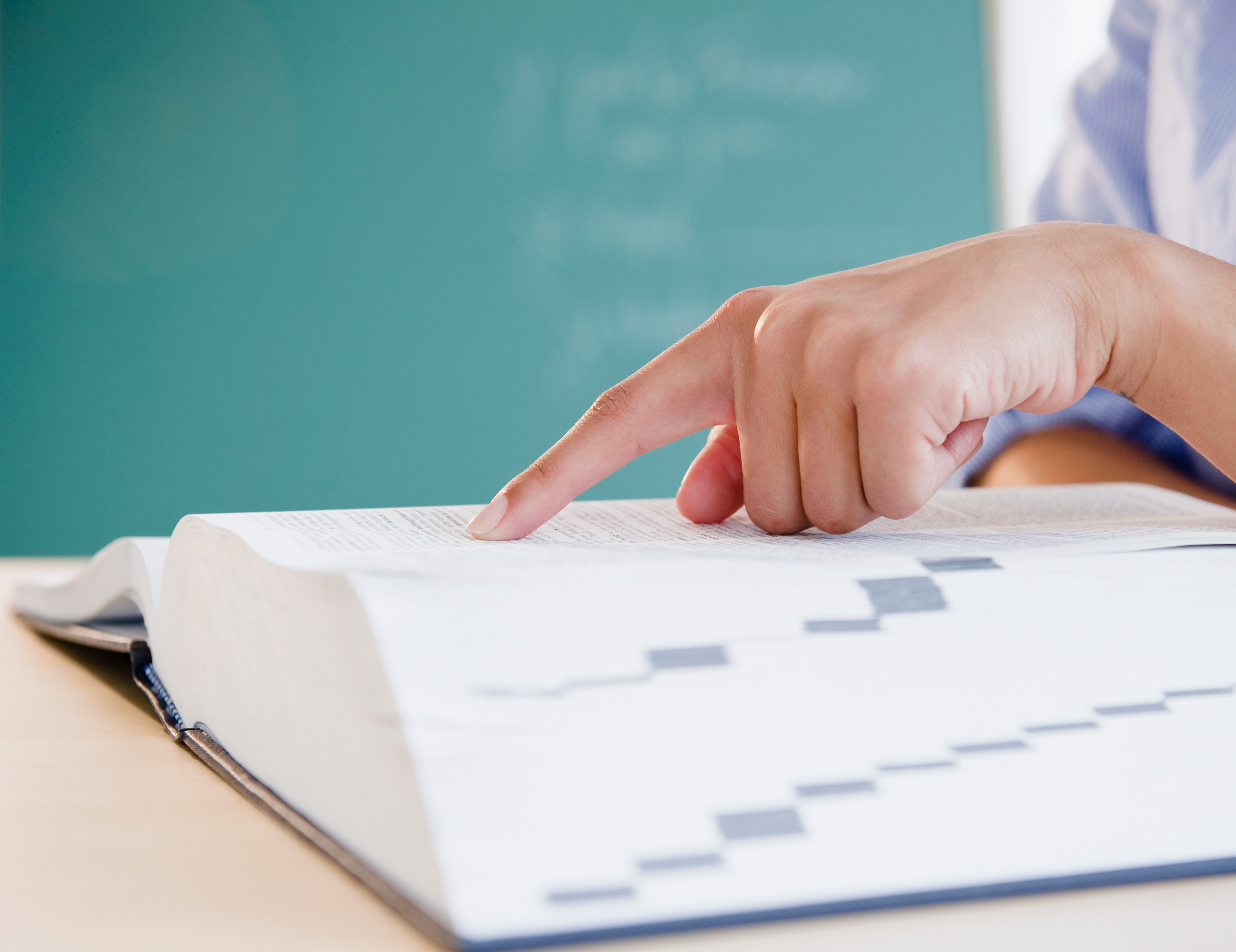 Have you been shamed or teased for using slang words like “adorbs” or “fave”? Well, turns out you’re well within your rights to use them—they’re now in the dictionary! Here are some more surprising words that seem casual or “slang-y”—but have earned a spot in the dictionary. Plus, here’s how words get added to the dictionary in the first place. 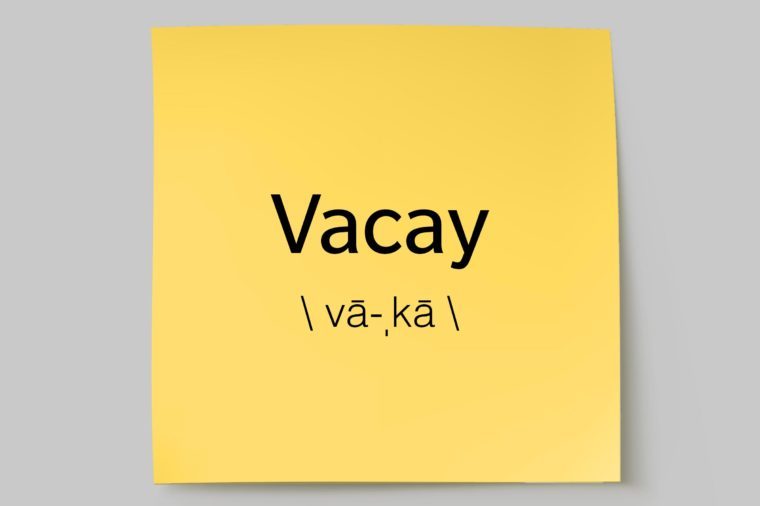 One of the words added to the dictionary for 2019, vacay is one of many modern entries that are simply shortened versioned of actual words. According to Merriam-Webster, the truncated form of vacation was first used in 1991. Does this word-shortening trend signal the end of proper English? That’s something to mull over on your vacay while you’re chilling on the beach. 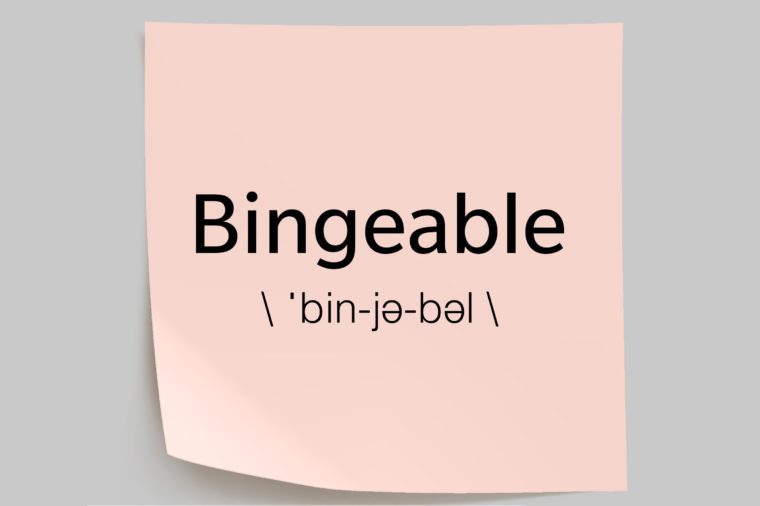 As the way we do things changes, our language adapts to the new customs as well. Take watching TV: Thanks to streaming services like Netflix, Hulu, and Amazon Prime, we no longer just get one episode a week. Entire seasons are available at once, so we can sit down and watch them back-to-back, or “binge” them. New shows that are worthy of such a binge are deemed “bingeable.” For example, “Netflix’s Tiger King is the most bingeable show I’ve watched in a while—I finished it in two days.” 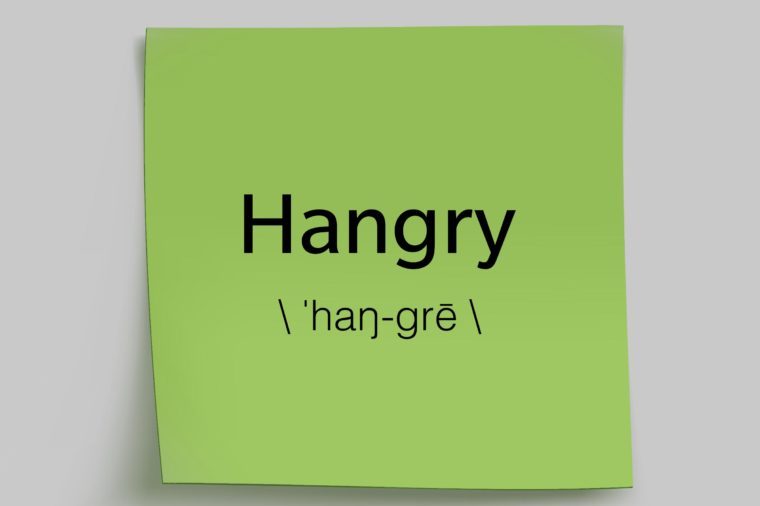 Everyone gets cranky when they need to eat, and this slang combination word, or “portmanteau,” perfectly captures what’s going on: You’re angry because you’re hungry. But here’s where one of your favorite slang words actually comes from: Merriam-Webster reports the mashup “hangry” was first used in 1918, which is hard to believe as it illustrates the modern word combo trend so well. But we traced that reference in the Oxford English Dictionary, the definitive guide to English language history, and yep, there it is, in a quote from author Arthur Ransome: “The elephant is very hungry and hangry from having had no dinner.” Check out the origins of more of your favorite slang words. 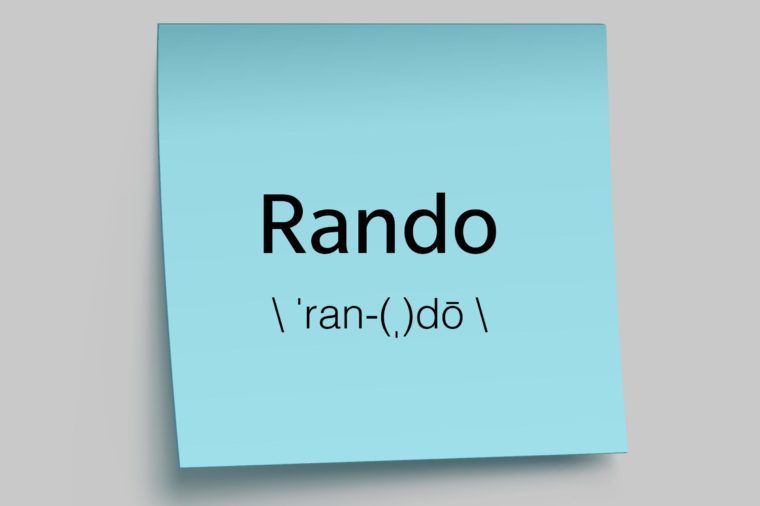 Apparently pronouncing one letter more in the already slang use of the word “random” is too much for today’s youth. In years past, “random” trended as a way to express dismay at something that was unexpected or unwelcome (“That guy showing up at the party was so random”). But “rando” finesses the disparaging slang into noun form: “Some rando just showed up at the party.” And actually, Merriam-Webster notes “rando” can also be used as an adjective, so we might be saying goodbye to the slang use of “random” all together. Here are some words that people say aren’t real words—but are! 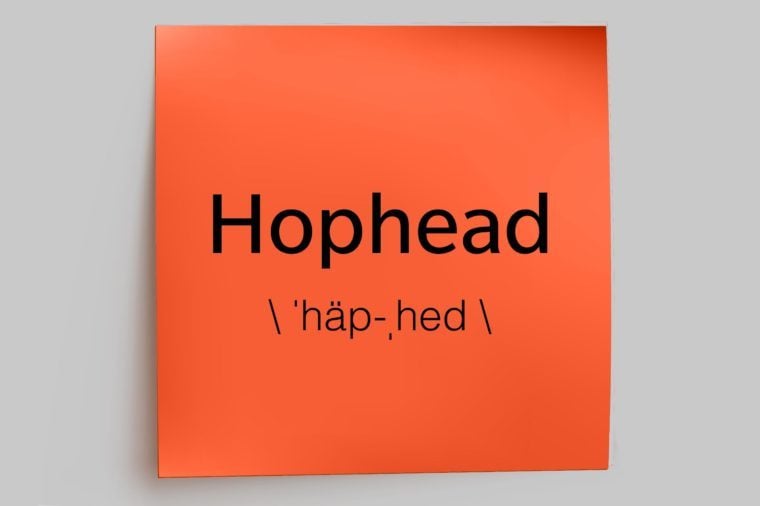 If you thought “hophead” was an old-fashioned term for someone who uses drugs, you’d be correct: Urban Dictionary notes it goes all the way back before the beatniks of the ’50s to the jazz era of the 1920s and ’30s, and that meaning may be one of 30 slang words from the 1920s that are worth bringing back. But Merriam-Webster has added a new slang definition of the word for today: simply someone who likes to drink beer, especially hoppy beer and ale. For example, “Hopheads will go crazy for the taste of this IPA.” 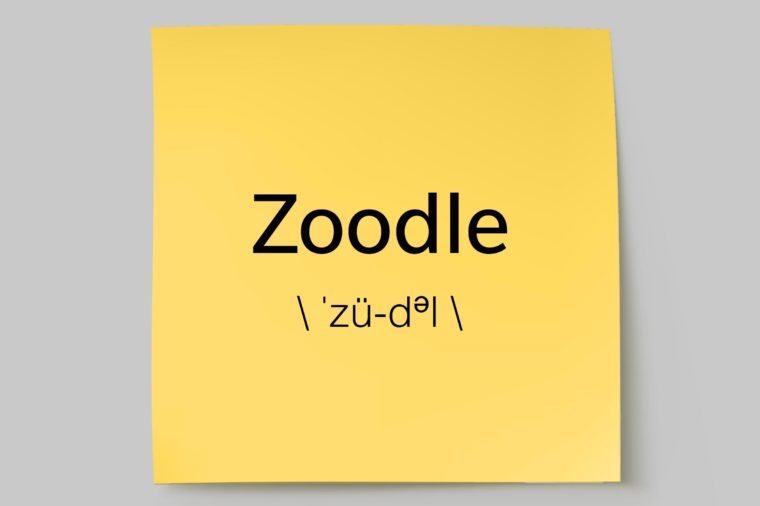 Another favorite way slang terms get made is by combining two previously separate words into one term to describe a new trend. For example, you’ve probably heard of the recent practice of making veggies into spaghetti-like shapes, often used to trick unsuspecting children into eating their vegetables or by dieters to trick themselves in thinking they’re eating carbs. Such noodles made with zucchini thus become “zoodles.” Used in a sentence: “These zoodles taste amazing! You’d never know they were made with zuke.” (Yes, zucchini’s shortened slang form is also now in the dictionary.) 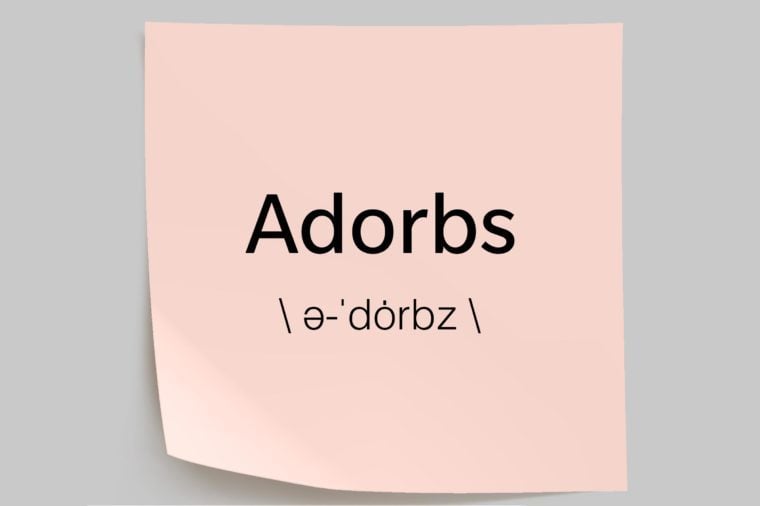 Some words don’t just get shortened: They get a cutesy, or some would say silly, tacked-on ending. In this case, the slang term adorbs, first used in 2008, is short for adorable. Why? Who knows, but it is catchy. Use it in a sentence like this: “OMG, your new shoes are totes adorbs!” Of course, some people think it’s just one of those trendy slang words that seriously need to end. 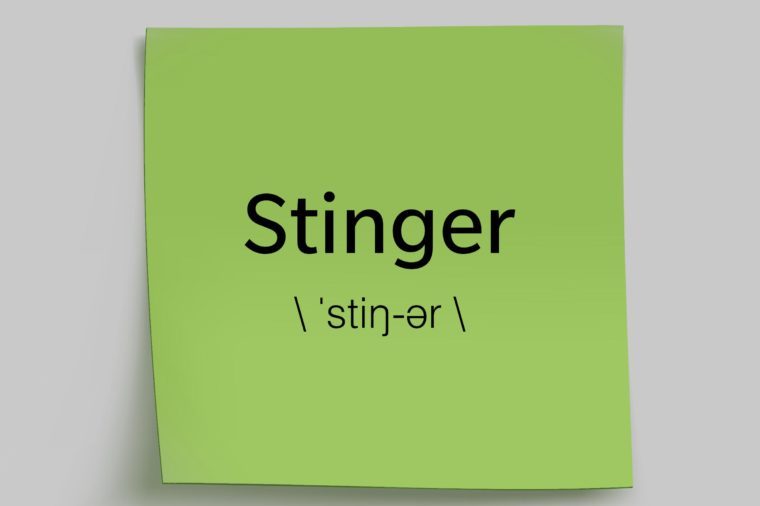 If you guessed this word refers to the pointy end of a bee or a harsh remark that stings, you’d be right—but a new slang definition was added to the list of meanings in 2019. Stinger also now officially refers to the short scene that appears during or after the closing credits of a movie or TV show. As in, “Be sure to watch to the end of the credits or you might miss the stinger.” For the real word nerds, here are some surprising words that have been added to the Scrabble dictionary. 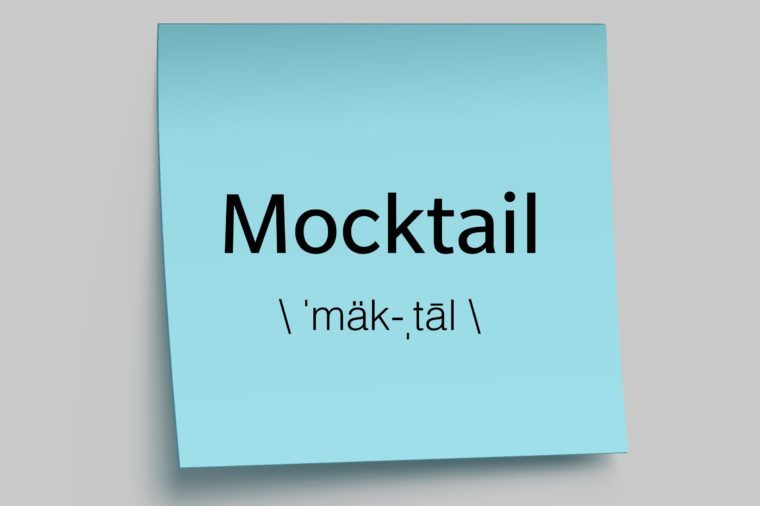 Every pregnant woman knows this one: It’s like a cocktail, but without the alcohol, hence “mock.” Don’t you love it when the perfect word rhymes like that? Such a happy coincidence that makes for great a new compound term. Merriam-Webster notes the word goes all the way back to 1916, making it one of the “modern” words that are much, much older than you thought. But “mocktail” earned its place in the dictionary because of its recent gain in popularity, as more bars are offering a greater selection of tasty concoctions without the hangover: “I’ll take a mocktail as I have an early morning meeting.” 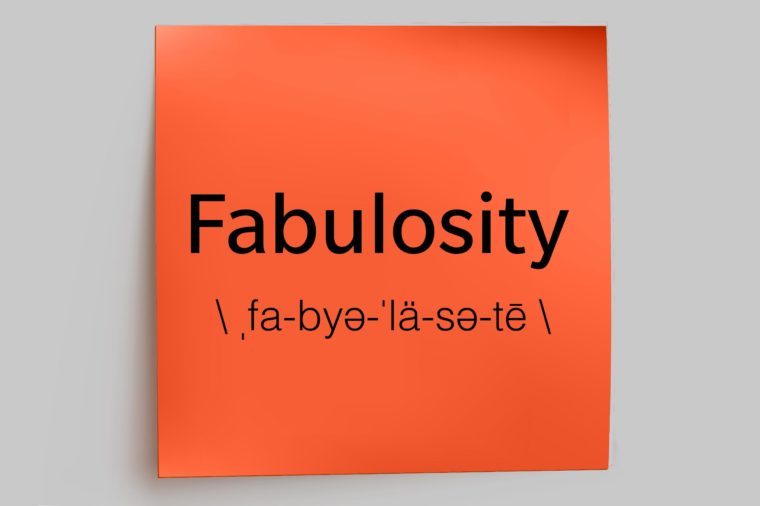 There’s already a noun for the adjective fabulous: the tongue-tying “fabulousness.” But fabulosity goes beyond that to embody a state of being fabulous that’s totally in step with modern times. This word, added last month, is not just about glamour: Fabulosity encompasses loving yourself, having style, and exuding charisma. For example, “Her friends encouraged her to get in touch with her inner fabulosity.” Check out these fun facts you never knew about the dictionary in general. 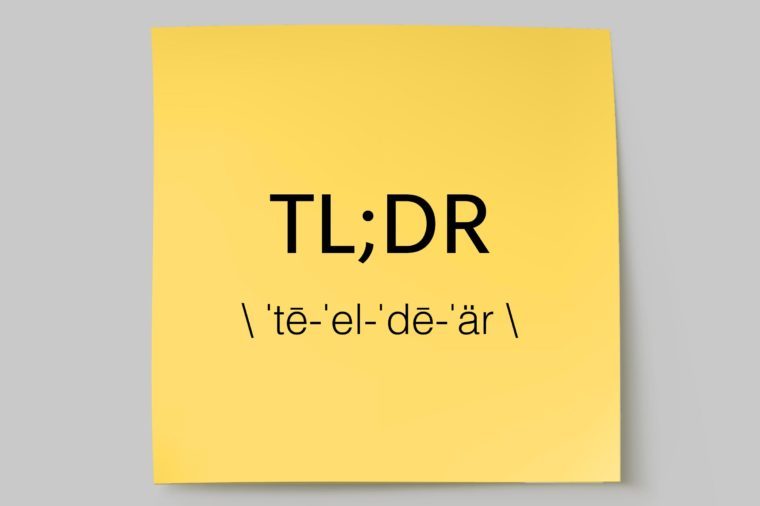 Apparently, words don’t even have to be words anymore to make it into the dictionary—this one even has punctuation! No idea what it means? We’ll give you a clue: Moby Dick, War and Peace, and most articles in the New Yorker could merit a TL;DR. Still not sure? It’s short for “too long; didn’t read.” But now, the abbreviation has gone beyond its original usage to become a noun or adjective meaning summary information: “The TL;DR of the new policy is that…” or “The TL;DR video gives the basic points of the Constitution.” TL;DR is one of 16 text abbreviations everyone should know by now. 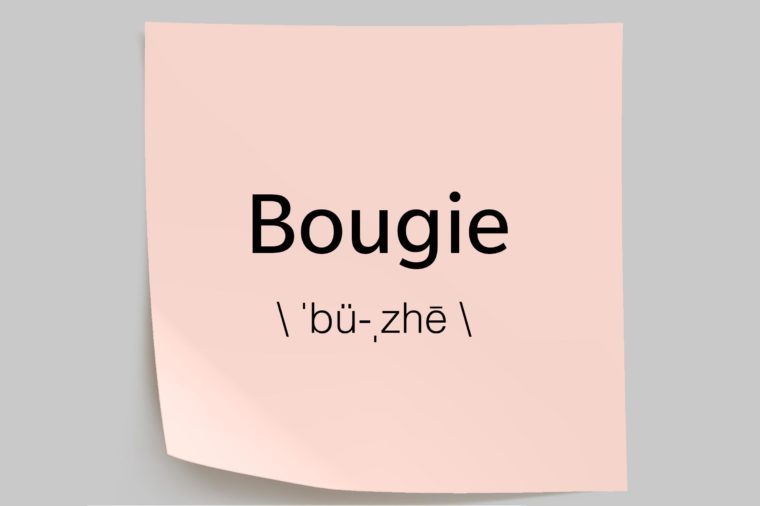 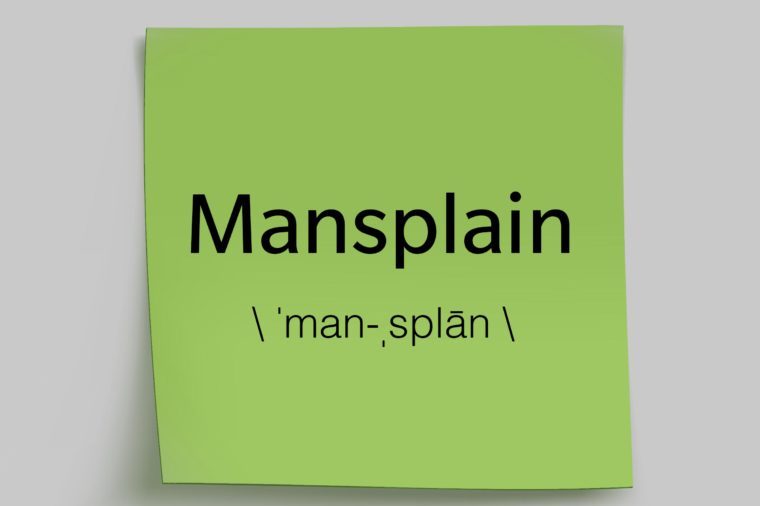 Any woman can recognize the mansplaining phenomena: The male tendency to talk condescendingly to a woman about things that she already knows well but that he likely doesn’t. (“He mansplained to me how to do my job.”) Some may say the word is now being overused, making it one of those buzzwords people love to hate. But its contribution to language can be seen in the rash of other “splaining words” that are applicable to all sorts of situations: whitesplaining, straight-splaining, left-splaining, and even potluck-splaining. Find out the slang words from 2019 that we’re sick of. 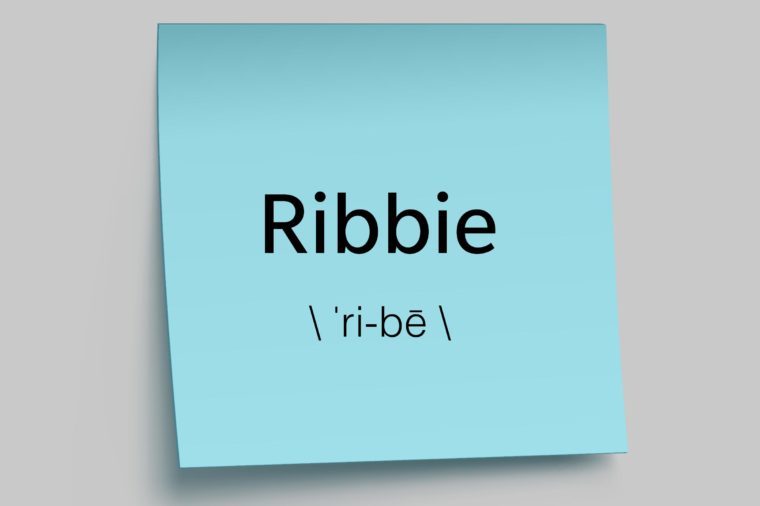 Words can become abbreviations, and sometimes, abbreviations can become words. Baseball fans will know “ribbie” as the phonetic pronunciation of the term RBI, or runs batted in. (For the sports illiterate, an RBI is a credit a batter gets for making a play that allows a runner to score.) Instead of pronouncing the letters, the stat is commonly pronounced as a word, “ribbie,” now recognized in its own right.

Interestingly, did you know that “acronym” only refers to an abbreviation that’s pronounced as a word, such as UNICEF or POTUS? And did you also know that some acronyms lose their uppercase abbreviation status to become just plain old words, such as radar (radio detection and ranging), scuba (self-contained underwater breathing apparatus), and laser (light amplification by stimulated emission of radiation)? “Ribbie,” though, is not exactly this: It belongs to the category of words that are formed “from spelling out or rendering pronounceable their initials,” according to Merriam-Webster, such as emcee. Here are some more words you didn’t know were acronyms. 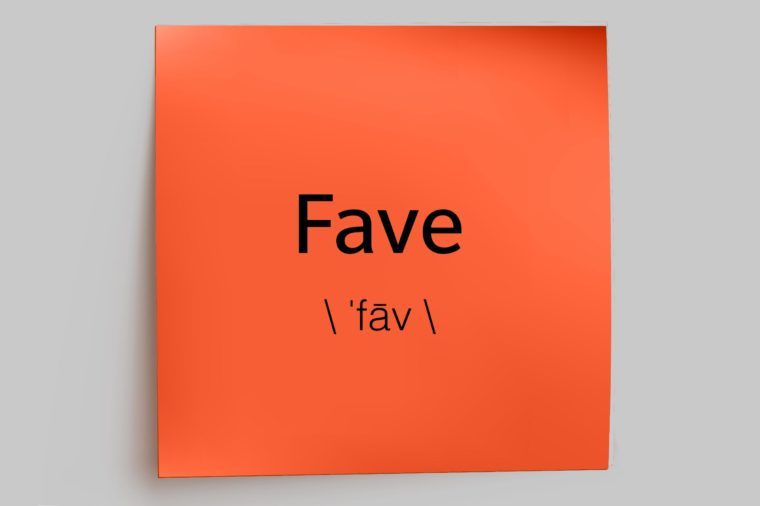 This is an easy one, and probably one of the slang terms most people have used. Fave is short for favorite, and the truncation traces all the way back to 1938, according to Merriam-Webster—yet the dictionary only recently added it. Merriam-Webster also allows for an alternate spelling without the ending “e,” so “fav,” although this is highly unusual. Most people would use it in a sentence like this: “My fave word in the dictionary has to be ‘fave.'” It may even be one of the overused words you should stop saying ASAP.