11 St. Patrick’s Day Traditions That Will Bring You Luck

You've heard of the luck of the Irish, but how can you get as much good fortune as possible on St. Paddy's Day? Discover authentic Irish past times you didn't know about, and learn the surprising history of others that actually originated in America. 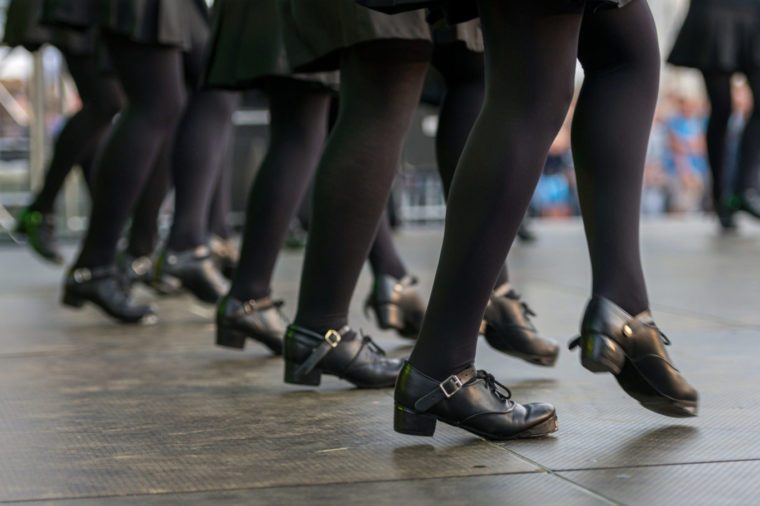 Irish or not, dance a little jig!

You’ve heard of the luck of the Irish, but how can you get as much good fortune as possible on St. Paddy’s Day? Discover authentic Irish past times you didn’t know about, and learn the surprising history of others that actually originated in America. 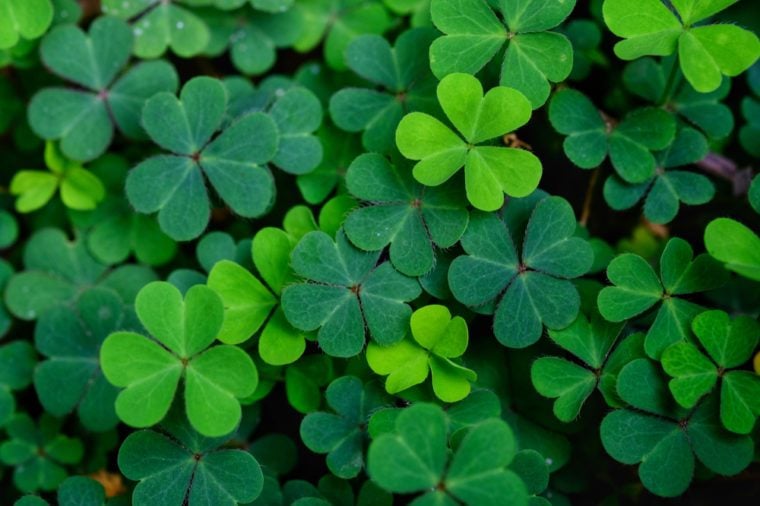 St. Patrick’s Day, March 17, was originally a religious feast honoring the patron saint of Ireland but has turned into a day to celebrate all things Irish. Legend has it that the good luck of the shamrock began when it was a revered pagan symbol, with the missionary Patrick later using its three leaves to explain the Holy Trinity (whether he actually did so is up for debate). Today, however, the shamrock remains a secular token of good fortune. In Ireland, it’s considered lucky to “drown” the shamrock. “Traditionally, the shamrock was dunked into a glass of whiskey, the whiskey was then drunk, and the shamrock at the bottom of the glass thrown over the drinker’s left shoulder,” says Christine Kinealy, PhD, director of Ireland’s Great Hunger Institute and professor of history at Quinnipiac University. “Allegedly, it was St. Patrick himself who first dunked the shamrock in the glass of whiskey, after wearing it during his feast day—but this is highly unlikely as he died on March 17, before the day was celebrated.” 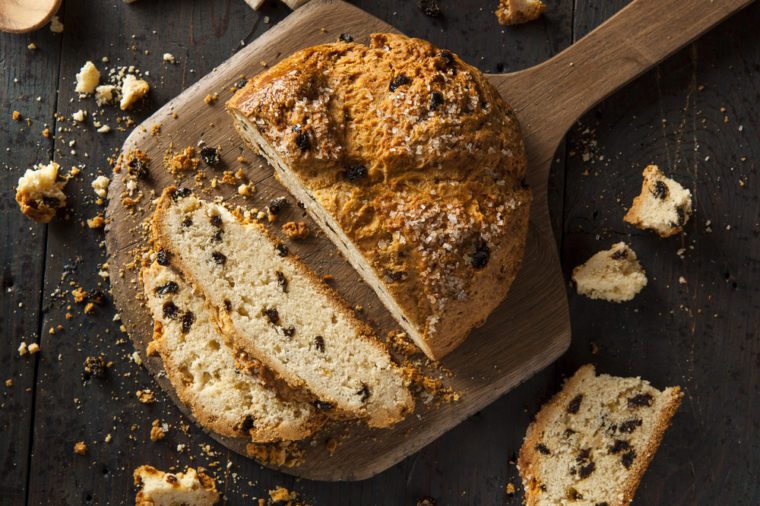 “Letting the devil out” of Irish soda bread

Many variations of so-called “Irish soda bread” made with eggs, butter, raisins, seeds, and sugar are eaten in America today for St. Paddy’s Day. But if you want to keep to the traditional Irish soda bread recipe, use only four ingredients: flour (often whole-meal flour), baking soda (called “bread soda” in Ireland), buttermilk, and salt. Historically, this recipe could be made by anyone thanks to readily available ingredients, including using soda instead of yeast for leavening, and because it could be cooked in a cast-iron pot over a flame, as opposed to an oven, which most people didn’t have. But for the bread to be lucky, you have to cut a cross on the top “to let the devil out,” as well as to release steam during cooking, a superstition that both the Irish and Irish Americans hold, Kinealy says. “In both Christian and pagan (Celtic) traditions, the cross is meant to ward off the devil and protect the household. But, the baking of soda bread was not really a custom until the late 1800s.” Find out about 12 good luck charms from around the world. 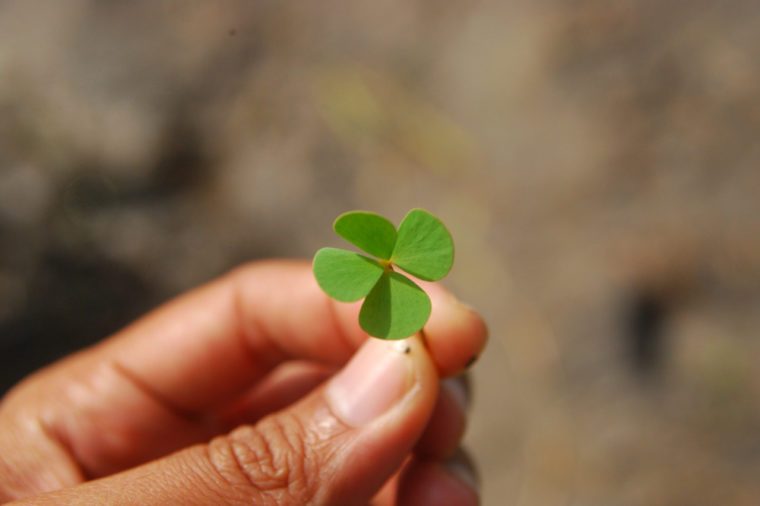 The shamrock, which has three leaves, and the four-leaf clover aren’t the same thing. “Biologically speaking, four-leaf clovers are extremely rare—usually they only have three clovers, and a fourth clover is a mutation,” Kinealy says. “There are likely 10,000 three-leaf clovers for every four-leaf clover.” Since they are so rare, finding one makes one feel lucky. As Scientific American explains, using those odds, you’d need to scan a clover field of about 13 square feet to find one with four leaves—totally doable! And instead of counting each leaf, try scanning the clovers quickly: Your brain will be able to notice deviations in the pattern you see. These are the 15 most mysterious sites in Ireland. 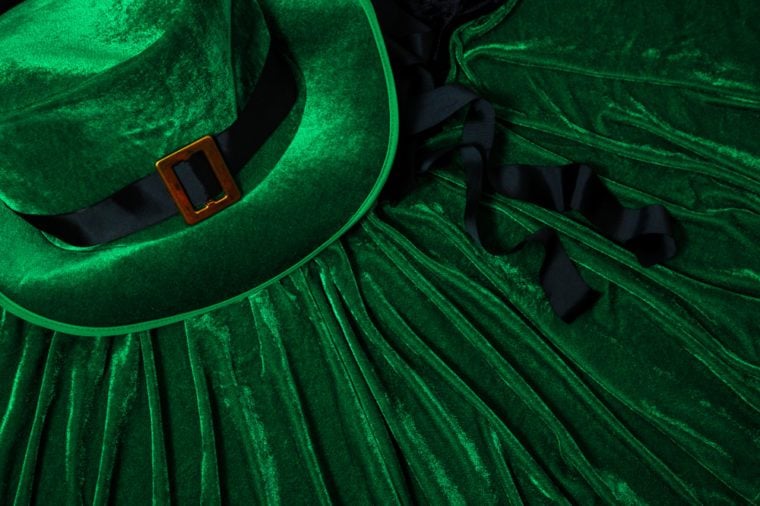 It’s considered lucky to don the color green in celebration of Ireland on St. Patrick’s Day. But Americans might be surprised to learn that the color has a political history behind it. “The wearing of green was a political and cultural identity movement in Ireland, and the stand against [British] colonialism,” Kinealy says. The Irish ballad “Wearing of the Green” laments the unsuccessful rebel uprising of 1798, and the color remained symbolic for Irish nationalism leading up to the country’s independence in 1922. “In the Irish flag, which was first brought to Ireland in 1848, the green in the tricolor represents Catholics,” Kinealy says. (The orange represents Protestants, and the white symbolizes peace between them.) Of course, green also fits in with Ireland’s lush landscape. “Ireland itself is even known as the ‘Green Isle’ or the ‘Emerald Isle,'” Kinealy says. 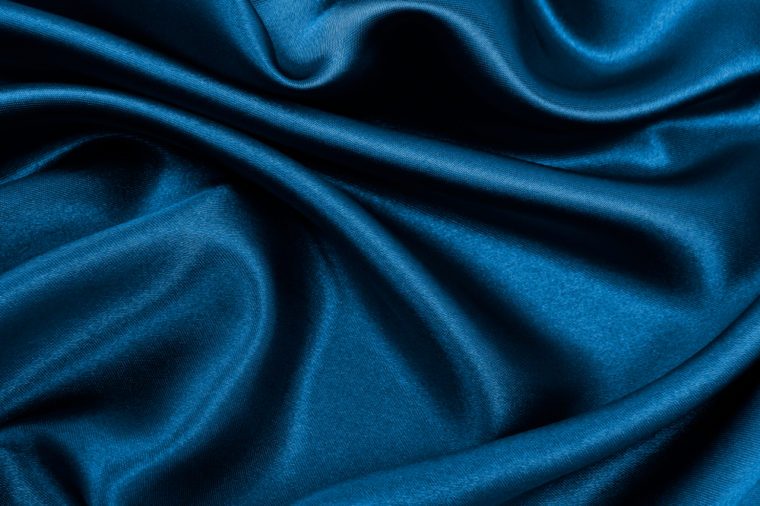 But, you could also celebrate Ireland by wearing blue, which was the background color of the first coat of arms when the Kingdom of Ireland was created by England’s King Henry VIII; the hue also has earlier links to a figure in Irish mythology, Flaitheas Éireann, who wore blue. Later, the Order of St. Patrick knighthood also wore blue. Even today, “the national color of Ireland is blue—St. Patrick’s Blue,” Kinealy says. The color appears on the Constitution of Ireland and the Presidential Standard flag as in the old coat of arms: a golden harp on a dark blue background. Discover 10 St. Patrick’s Day “facts” that are actually false. 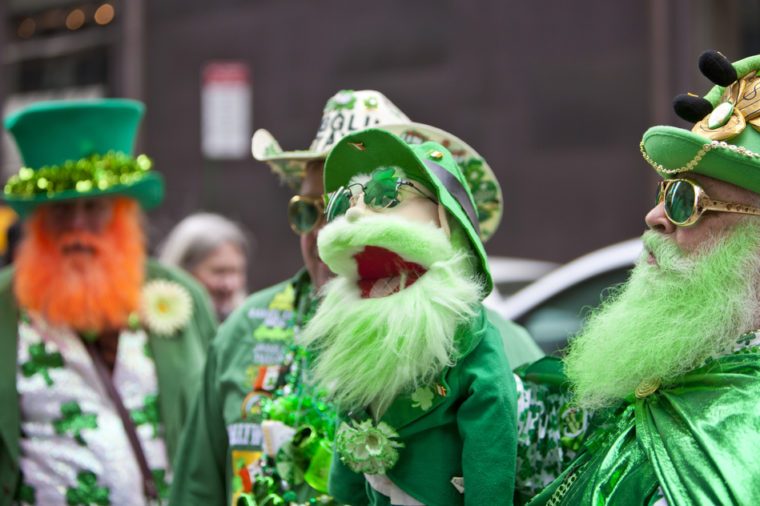 Pinching those not wearing green

Another reason to wear green for luck is that legend has it leprechauns can’t see you if you’re wearing the verdant color. And if they see you, they will pinch you! Likewise, tradition says you can pinch someone on St. Patrick’s Day who isn’t wearing green—but this may be an Americanization, not a true Irish custom. In fact, leprechauns originally wore red in Irish folklore. “Pinching those not wearing green appears to be an American invention,” says Kinealy. Find out 13 surprising things you didn’t’ know were considered bad luck. 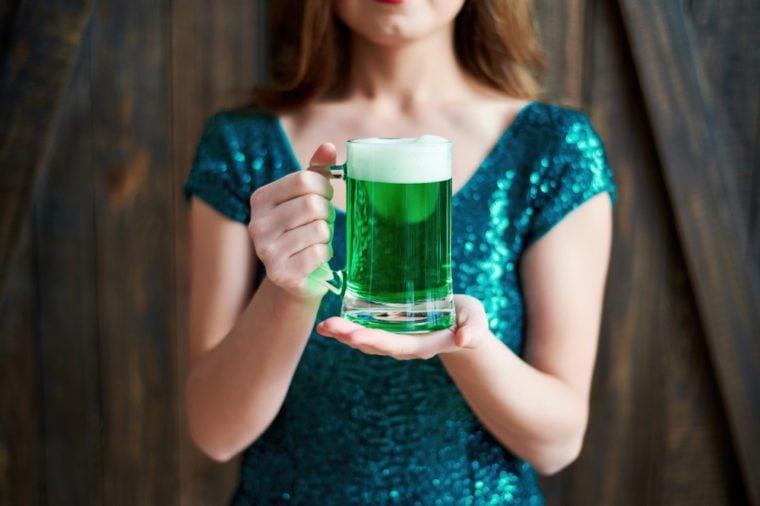 But not eating green food

Dying food (or rivers, or beer, or anything else) green is actually not an Irish past time—and in fact, has some decidedly unlucky associations in Irish history. “Green food is not an Irish tradition, possibly due to the historical trauma of the Great Famine, when Irish folk literally had no choice but to eat grass in an attempt to survive, then they would often die of starvation with green-colored mouths from eating grass,” Kinealy says. “American celebrations of St. Patrick’s Day likely use green food and drink to celebrate the ‘greenness’ of Ireland, i.e. the Emerald Isle.” So forget the green beer—if you want to imbibe the Irish way, sample some of the thick Irish stout called Guinness. 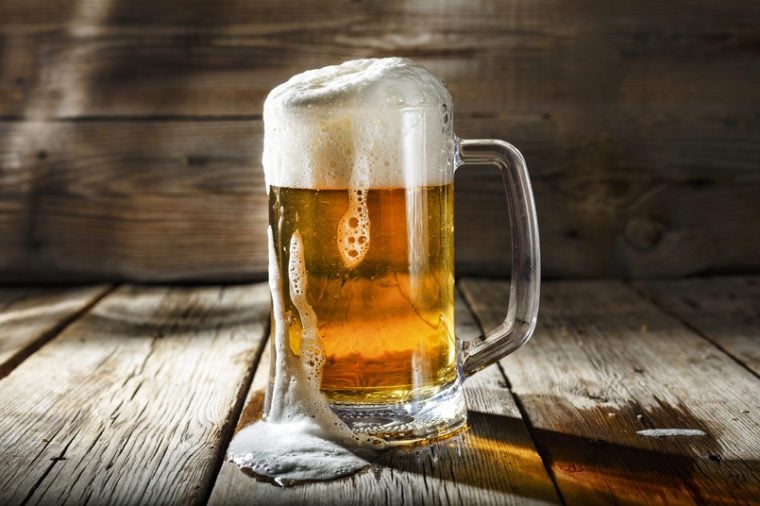 Or, skip the alcohol altogether. St. Patrick’s Day falls during Lent, a religious season of sacrifice, but the rules were traditionally relaxed for this feast day. However, St. Patrick’s Day in Ireland is still not traditionally the raucous celebration it is in America—and it might bring you better fortune (and save you a hangover) to not use the holiday as an excuse to overindulge. In fact, up until the 1970s pubs were closed in Ireland on St. Paddy’s Day, and celebrations usually included a trip to church. In a strange reversal of tradition, the Irish government was actually inspired by American celebrations to create a multi-day St. Patrick’s festival in 1995 to boost tourism. But, not everyone is happy about the associations between St. Patrick’s Day and drinking. “There is a large movement to stop associating the day and the Irish with drinking—and now a number of ‘Sober’ parades,” Kinealy says. See how St. Patrick’s Day is celebrated around the world. 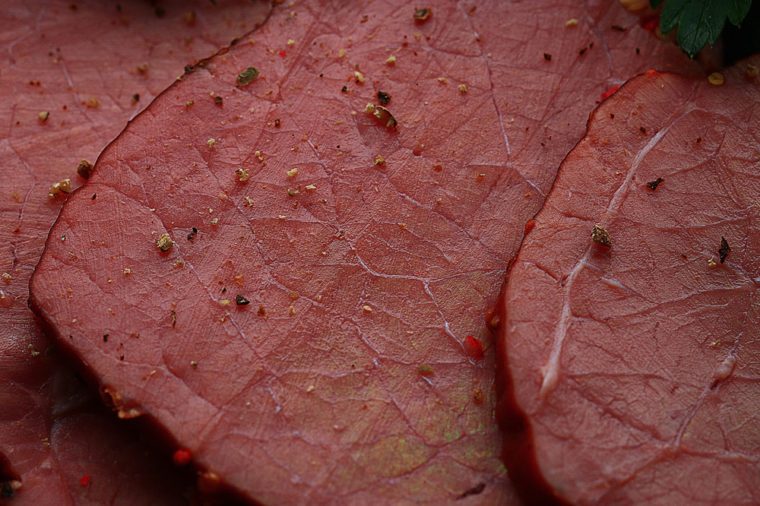 Although there might seem like nothing more Irish than eating corned beef and cabbage on St. Paddy’s Day, this meal is actually not an Irish tradition at all. In Ireland of yore, it would have been unlucky to kill cows, which were mainly used for dairy. On St. Patrick’s Day, cured pork (Irish bacon) was more likely to be eaten in Ireland. Corned beef on St. Patrick’s Day is an American adaptation of the holiday, Kinealy says. “In Gaelic Ireland, cattle were symbols of the wealthy and were only killed when they were too old or were no longer able to produce milk. There were more pigs kept in Ireland than cows, so more pork and bacon was consumed than beef.” So how did the corned beef association come about? Irish immigrants in America may have adopted the meal from their Jewish neighbors. These may be Americanized, but check out deliciously easy St. Patrick’s Day recipes everyone will love. 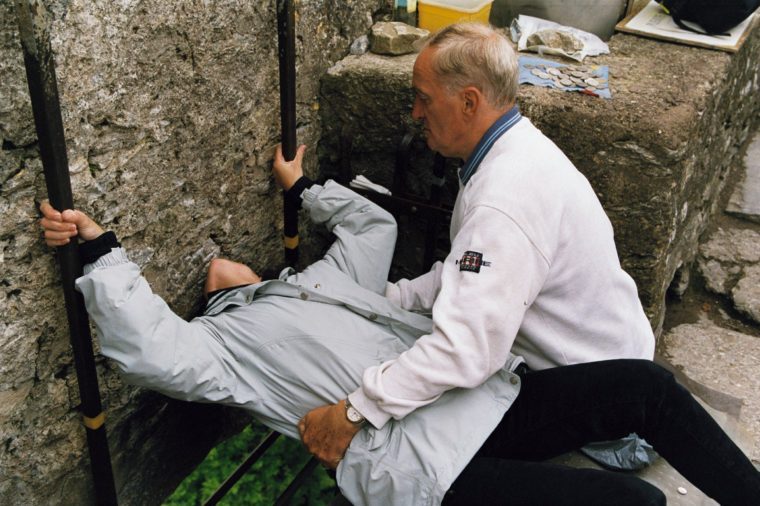 No doubt, you’ve heard the phrase, “Kiss me, I’m Irish”—or at least seen it on a T-shirt. Where did this tradition come from? Although no definitive source can be found, the prevailing theory is that the saying refers to kissing the Blarney Stone at Blarney Castle in Ireland, which is said to give the lucky smoocher the gift of the gab—so kissing an Irish person is the next best thing. But although modern Americans may consider the Irish lucky, that may not be historically accurate. “The saying, ‘the luck of the Irish’ is not of Irish origin—knowing the history, Ireland was typically unlucky,” Kinealy says. “In addition to the Great Hunger, the Irish poor witnessed many periods of starvation. When they immigrated from Ireland [to America], they were discriminated against and there were many stereotypes surrounding them.” Still, Irish pride (or Irish-American pride) may rub off on you, no matter your heritage, on St. Paddy’s Day. Read on for 18 history lessons your teacher lied to you about. 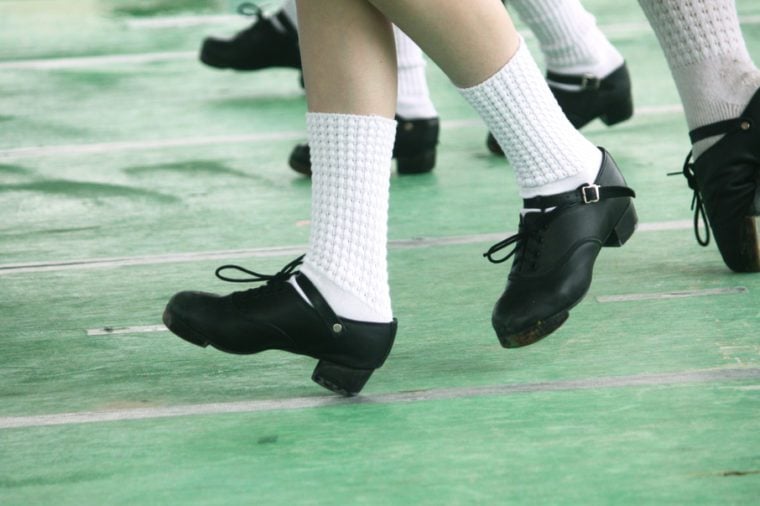 To celebrate the Ireland that actually exists, and not just the fantasy created around the holiday, on St. Patrick’s Day take the opportunity to learn about more real Irish traditions. Sing an Irish ballad, listen to traditional Irish folk music, take an Irish dance class, read Irish poetry, or even try speaking a bit of the Irish language. In doing so, you’ll become lucky not for some magical reason, but because you’ve experienced the rich culture of this fascinating country. Now, find out 21 things you didn’t know about St. Patrick’s Day.