14 Star Wars Facts Everyone Gets Wrong

No matter how much the Force may be with you, you may find these Dark Side facts confusing. 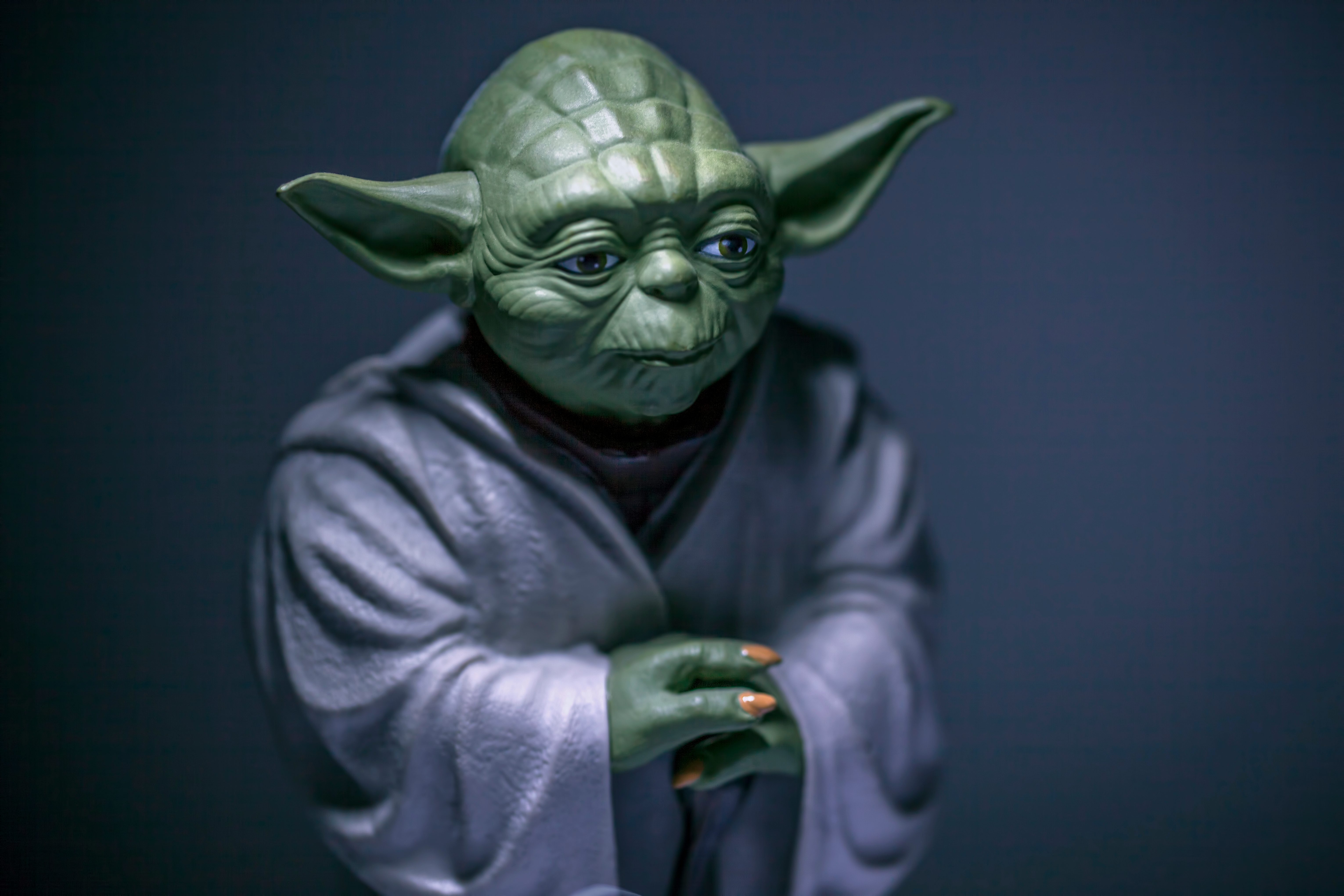 Know these facts, did you?

It’s no secret that Star Wars fans are pretty passionate. They’ve created their own holiday for celebrating the franchise, after all! But even Star Wars devotees might get stumped by these perplexing bits of trivia about the universe in which the films take place. Here are some nuggets of trivia that might surprise you—even if you’re a longtime Star Wars buff. Plus, check out these behind-the-scenes facts about the films that every fan should know. 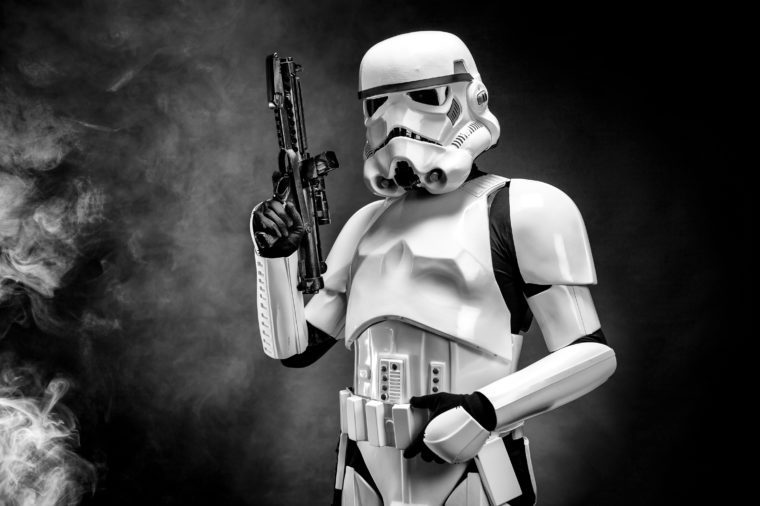 At times their aim may seem suspect, but there are countless examples to suggest the Stormtroopers may be the best fighters in the universe. Take, for example, the fact that they slaughtered the Jedi when Order 66 was executed, and their repeated ability to defeat the rebels. And don’t forget the time Stormtroopers kill Luke’s Aunt Beru and Uncle Owen and a group of Jawas while framing the Sand People: Obi-Wan explains to Luke that it couldn’t have been Sand People who attacked because “only Imperial stormtroopers are so precise.” See if you can handle these Star Wars–themed Jeopardy! questions. 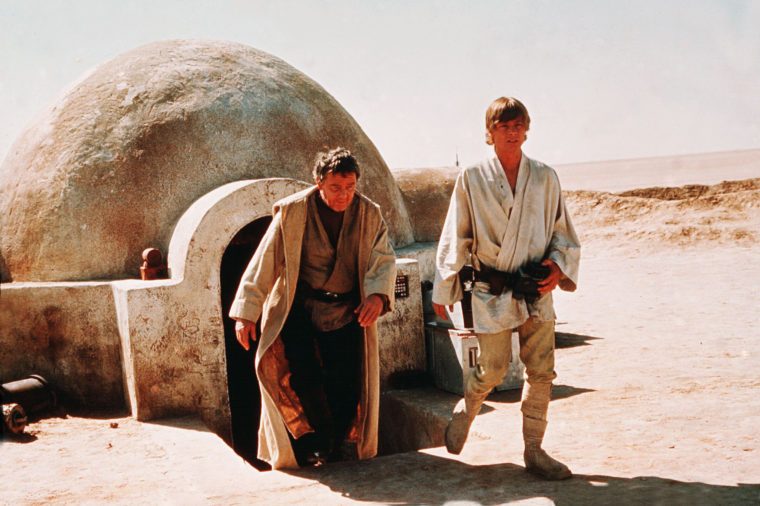 Luke could have joined the empire

It’s a quick moment in “A New Hope,” but Luke Skywalker mentions to Uncle Owen that he might “transfer my application to the Academy.” At that time, he could have only meant the Imperial Academy, which is why some critics and fans argue that Luke could have joined the Dark Side, despite his good intentions. However, it’s entirely plausible that he would have defected just as many other rebels did. 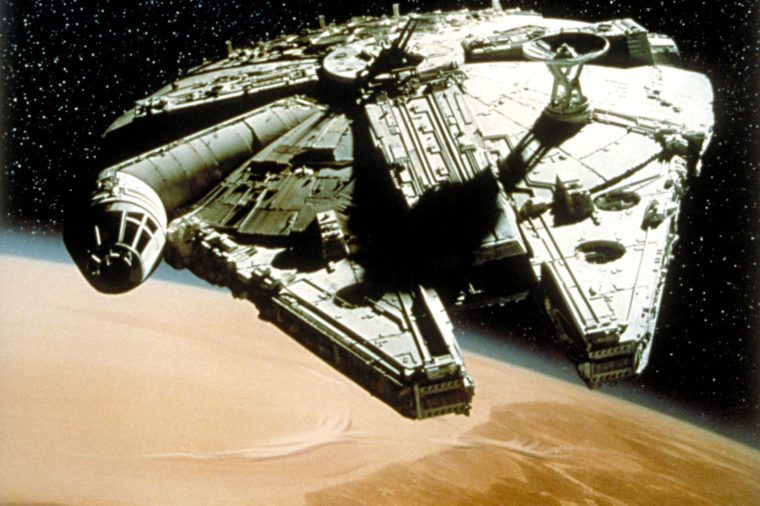 Parsecs are a real thing

Many Star Wars fans thought George Lucas made a mistake when he had Han boast that his ship made the Kessel in under 12 parsecs.” Parsecs are real, but they’re a measure of distance and not time. (It would be like saying you made it to the airport in 12 miles instead of 18.) However, Lucas had an explanation based on hyperspace: Ships can’t travel in a straight line during hyperspeed or they’d run into stars, planets, etc. An onboard computer must plot a safe route, and the Kessel run took 18 parsecs. By shaving off six parsecs, the Millennium Falcon’s superior onboard computer pulled off an impressive feat. (Of course, Obi-Wan’s wry look suggests he doesn’t buy Han’s boast.) Don’t miss these inspiring Star Wars quotes every fan should know by heart. 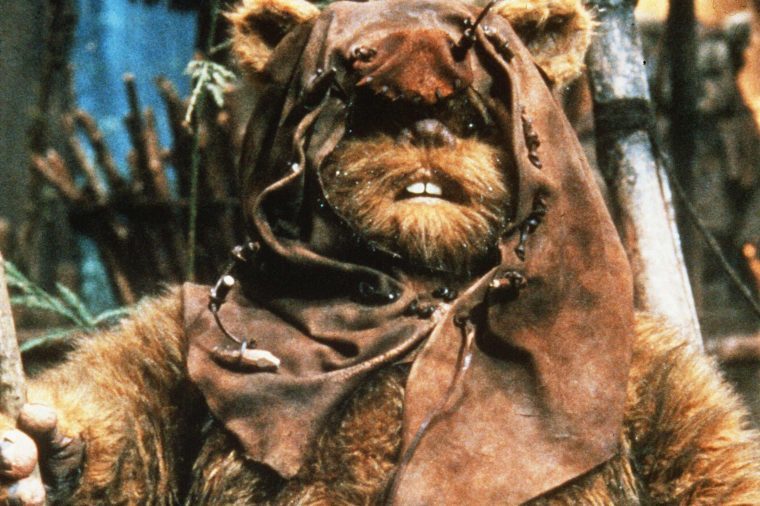 Ewoks are neither cute nor cuddly

Listen up: Ewoks hunt and eat other living creatures, which is what they planned to do with Han. C3PO even tells Han that the smuggler will be “the main course at a banquet in my honor.” What’s more, Lucas revealed in the commentary to the 2004 re-release of the Star Wars movies that the Ewoks and their guerrilla fighting are modeled after the Viet Cong. 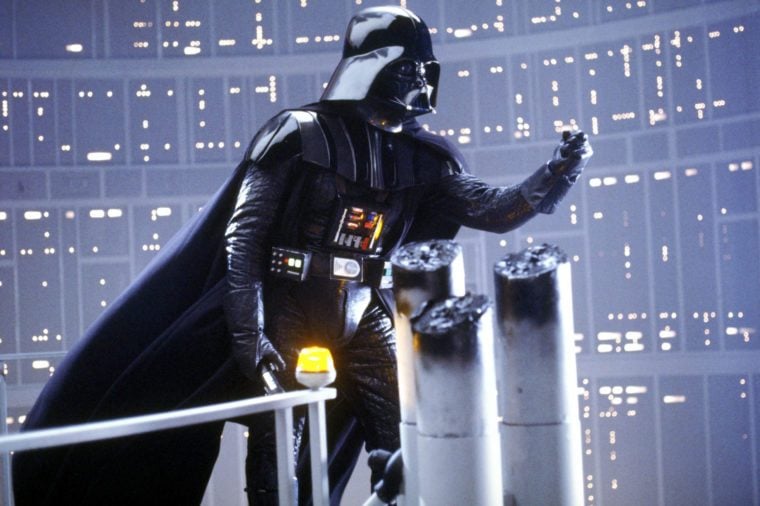 Vader never said, “Luke, I am your father.”

Seems ridiculous, right? Not so: Despite being one of the most iconic lines to come out of the series—in Star Wars Episode V: The Empire Strikes Back—the actual wording was, “No, I am your father.” Star Wars fans aren’t alone, though; there are plenty of famous movie quotes everyone gets wrong. 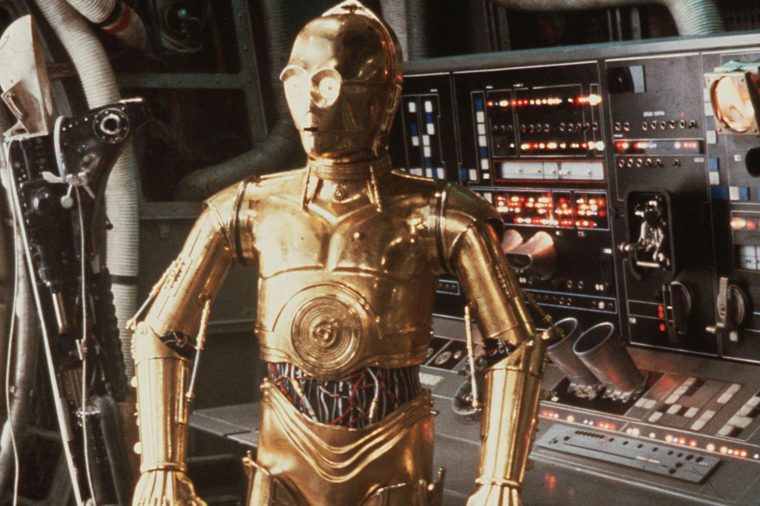 Despite being everyone’s favorite golden robot, CP30 wasn’t all gold the entire series. According to USA Today, if you look very closely at the stills from the original trilogy, you will see that the protocol droid has a silver leg. 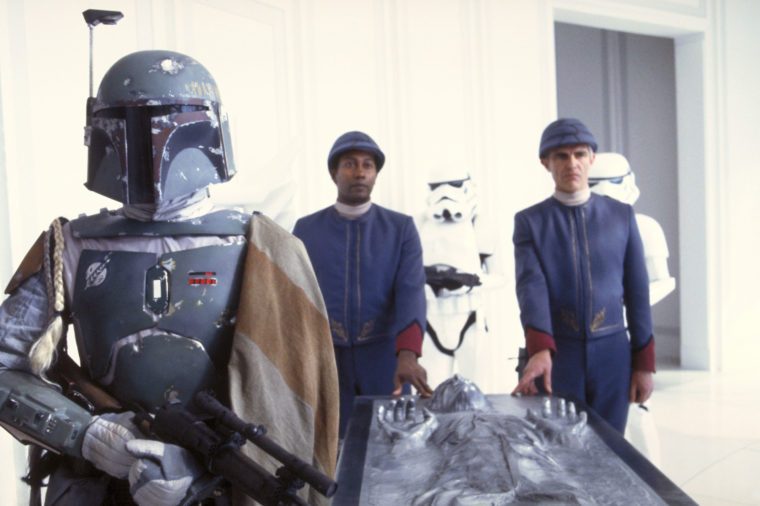 Boba Fett has become an icon—and a meme—for Star Wars fanatics. But most still don’t realize that the beloved Boba originally turned up came in an ill-received, barely watched holiday special; apparently, Christmas miracles are possible in space, too. A lot of Star Wars fans definitely think the Christmas special is a joke; here are some actual Star Wars jokes that you’ll laugh at. 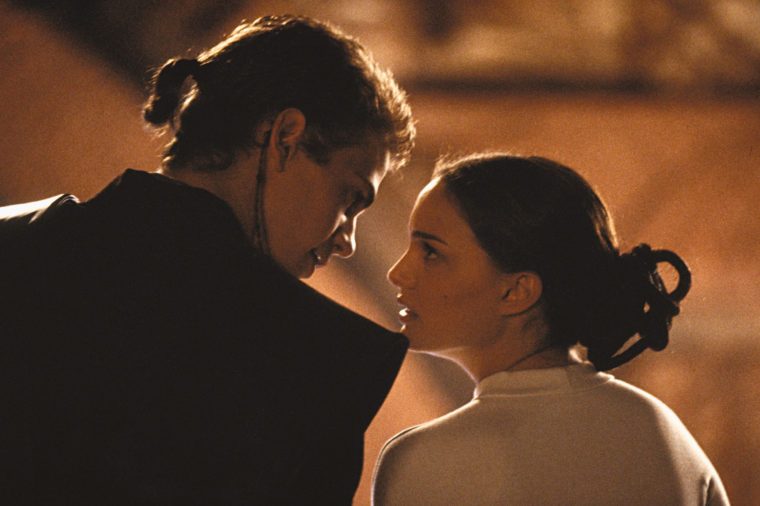 Jedi can (and do) have sex

During a 2002 interview in London with the news organization BBC, Lucas clarified the typical understanding that Jedi are sexless warrior monks by pointing out, “Jedi Knights aren’t celibate—the thing that is forbidden is attachments—and possessive relationships.” 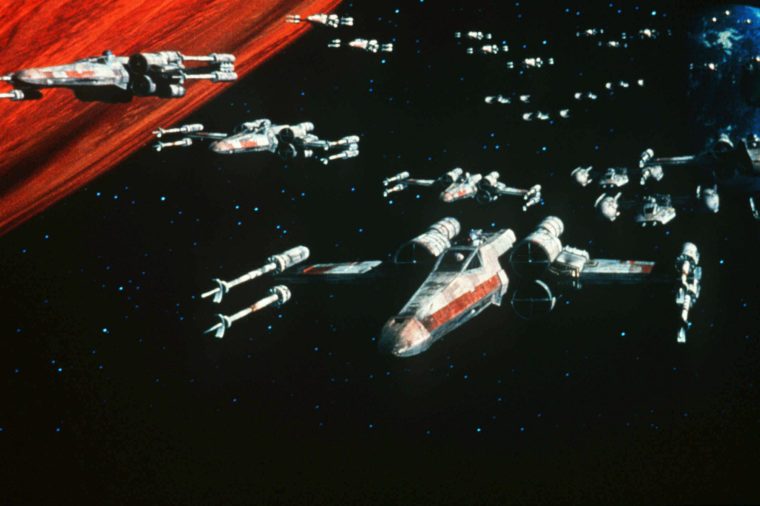 Luke was always able to fly an X-wing

When the Rebels get set to attack the Death Star, Luke joins right in with the trained pilots and ends up—spoiler alert—saving the day. How could he be so competent as a fighter pilot? Earlier, Luke is seen with a model of a T-16, which according to Star Wars canon was manufactured by Incom, the same company responsible for X-wings. So he was already familiar with the control system… right? OK, that’s a stretch, but you can regain belief with this awesome Star Wars experience. 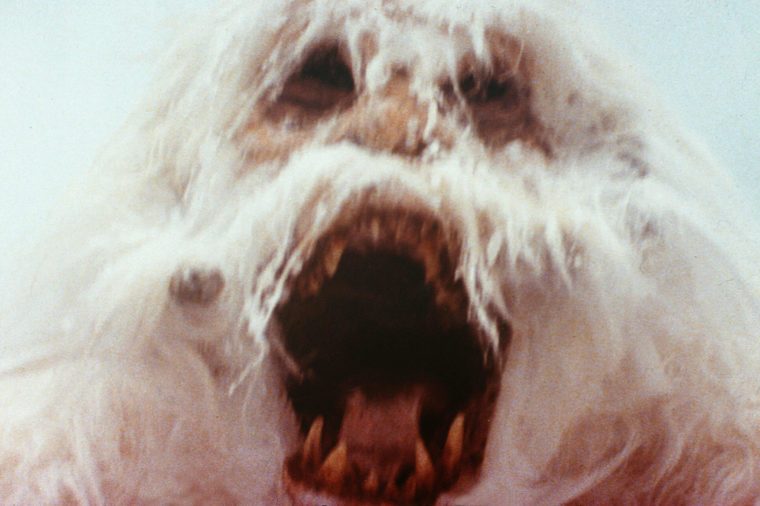 Despite the fact that Hamill got into a scar-inducing car accident in 1977 between the first two movies, the wampa attack wasn’t Lucas’s attempt to explain the facial damage, according to a report in Business Insider. 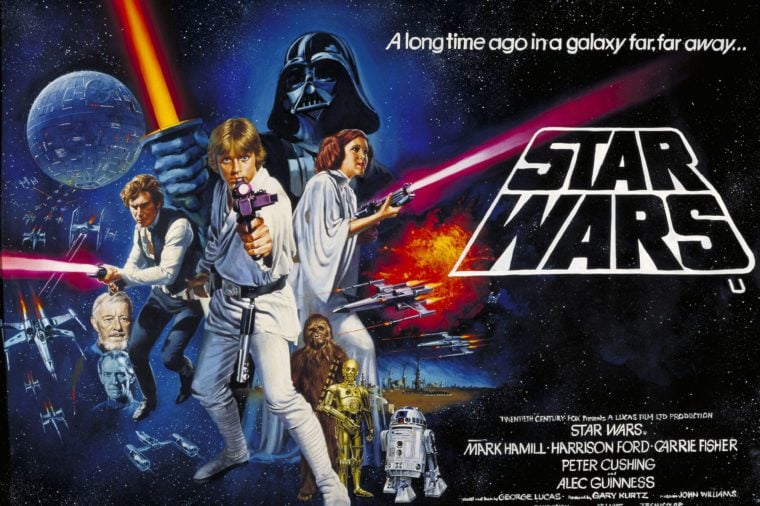 Diehard Star Wars fans swear Lucas only approved the original trio of films, but in December 2017 it became official that was not the case. According to an interview in Deadline, Rian Johnson, the director of Star Wars: The Last Jedi, says that Lucasfilm had no overarching story in place for the trilogy; this also meant Johnson had creative freedom. Find out what the first film was almost called, instead of “Star Wars,” with this look at the Star Wars films’ working titles. 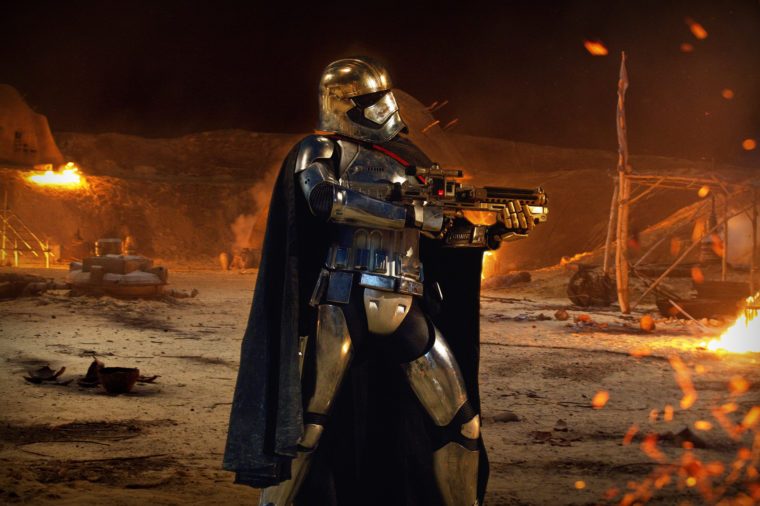 While Gwendolyn Christie, who played the stormtrooper Phasma, was the first-ever on-screen female stormtrooper, she wasn’t the first female ever: Several female characters played roles in the literary series that preceded the films, and it’s likely we’ll see many more female stormtroopers in the future. 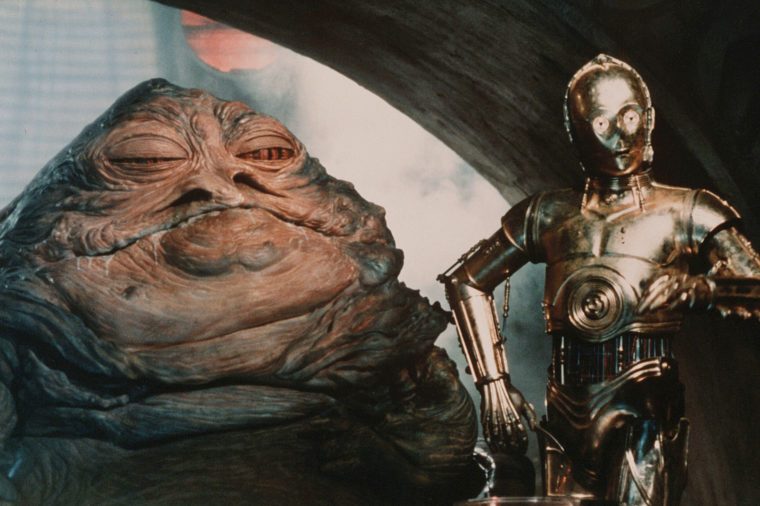 We’re rooting for the wrong side

As the Washington Post notes, on one side you have a mostly benevolent dictatorship that is bringing order to the galaxy. “On the other, you have a band of religious terrorists whose leaders include a drug smuggler in the pocket of slavers and a pair of incestuous twins working to restore a broken republic held hostage by special interests that tolerated its citizens being treated as chattel.” Makes you think, huh? Next, find out how we came to celebrate a Star Wars holiday on May 4.

Rachel Jacoby Zoldan
Rachel Jacoby Zoldan is a beauty, health and lifestyle writer based in New York City. Her work has also appeared Refinery29, Men's Journal, Redbook, SELF, InStyle, HGTV Magazine and the Huffington Post. When she's not writing or editing, she's probably running, taking a yoga class or on a Spin bike somewhere. Thinking about really great leggings. (Also, maybe, the couch, too.)