The response is a lot more complicated than you would think if you're trying to convince someone to fall in love with the series and avoid epic spoilers. 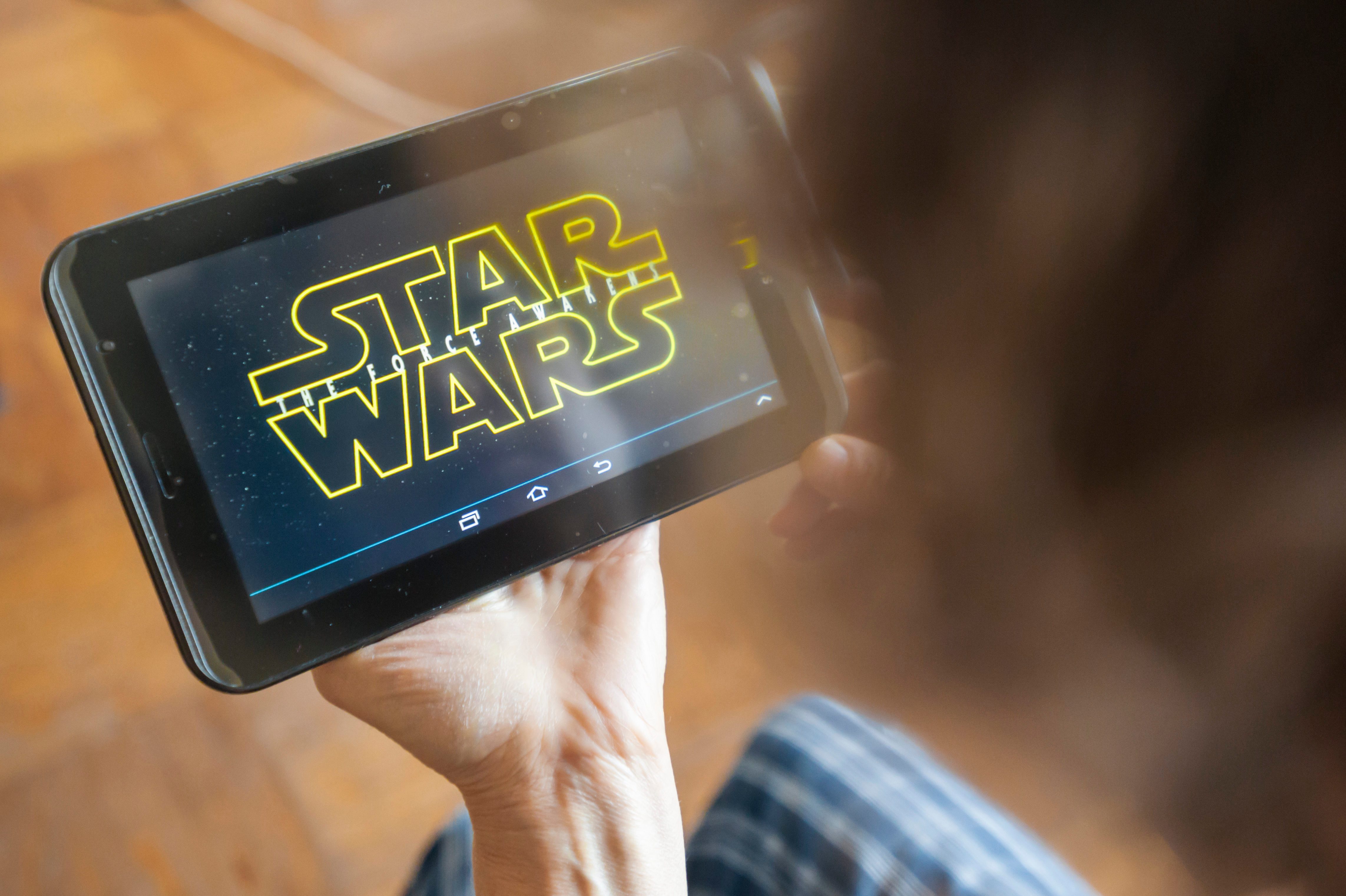 The Star Wars franchise has grown exponentially since the original film, Episode IV: A New Hope, was released in 1977 (of course, back then, it was just Star Wars—the title A New Hope was introduced in 1981 when George Lucas re-released the film). Now there are nine movies in the episodic portion of the “space-opera,” plus two standalone films with Rogue One and Solo. And you can’t forget The Mandalorian on Disney+, or animated series like Clone Wars and Star Wars Rebels. With so many opportunities for fans to consume the saga, it’s natural for them to have very strong opinions on the order in which each piece should be viewed—and surprisingly, it’s not according to the timeline in which each movie takes place, nor is it in the order it was released. May 4 is the perfect day for a Star Wars marathon—find out how May the Fourth became a Star Wars holiday. 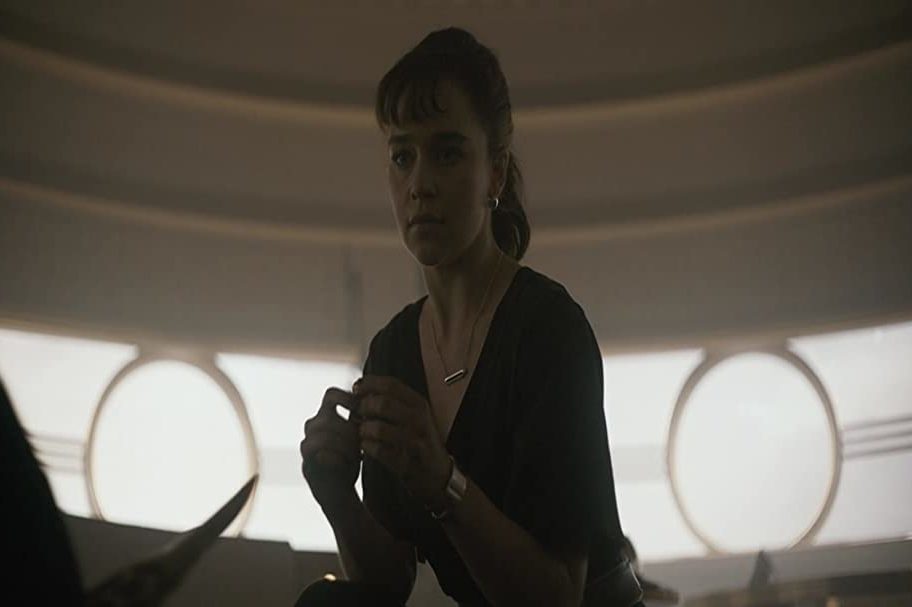 Chronologically speaking, Solo is where a Star Wars binge-a-thon should begin. In this standalone flick released in 2018, we meet young Han Solo long before he linked up with Luke and Leia. Don’t worry, you’ll still get plenty of Chewbacca time and will learn how Han became in possession of the infamous Millennium Falcon (thanks, Lando!). It’s an origin story that doesn’t give viewers a ton of insight into the infamous pilot (played in this film by actor Alden Ehrenreich) but it’s a fun little romp into the character’s earlier days as an intergalactic smuggler. Check out these mind-blowing behind-the-scenes Star Wars facts. 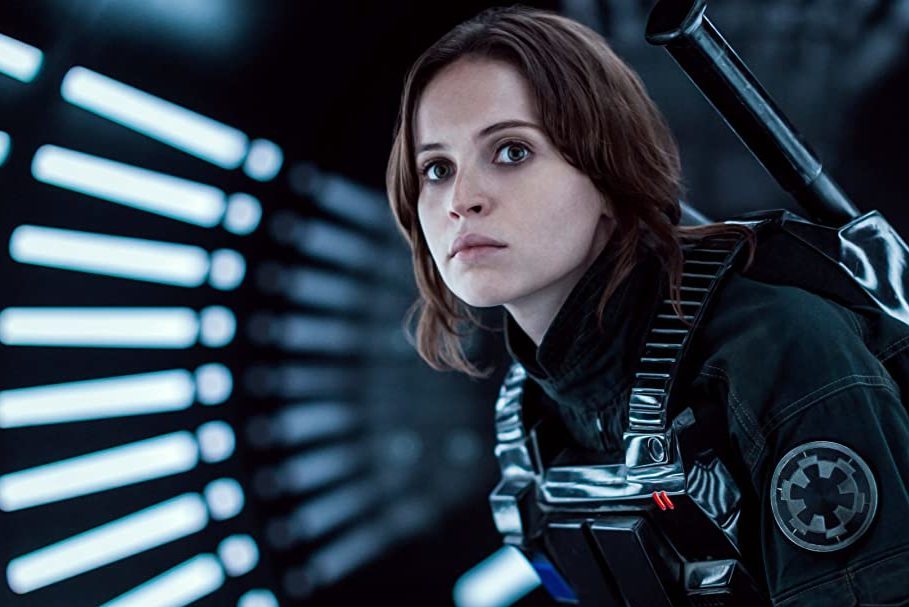 Although it was released in 2016, nearly 40 years after the first film hit theaters, the Star Wars fans we spoke with largely agreed Rogue One should be at the beginning of any marathon of the franchise. The standalone movie starring Felicity Jones and Diego Luna has a decidedly different feel from the rest of the franchise but sets up the scene beautifully for Episode IV: A New Hope. For those who know the opening crawl of that film by heart, Rogue One delves into the story of how the Rebel Alliance was formed and details their attempts to steal the plans to the Death Star. Now if you’re a big believer in Star Wars chronology, you’re probably upset that Episodes I-III aren’t listed before Rogue One. The reason? Many fans don’t care enough for those to give them a prime position in the queue and if you watch them in that order, you’ll spoil one of the most surprising reveals in cinematic history. 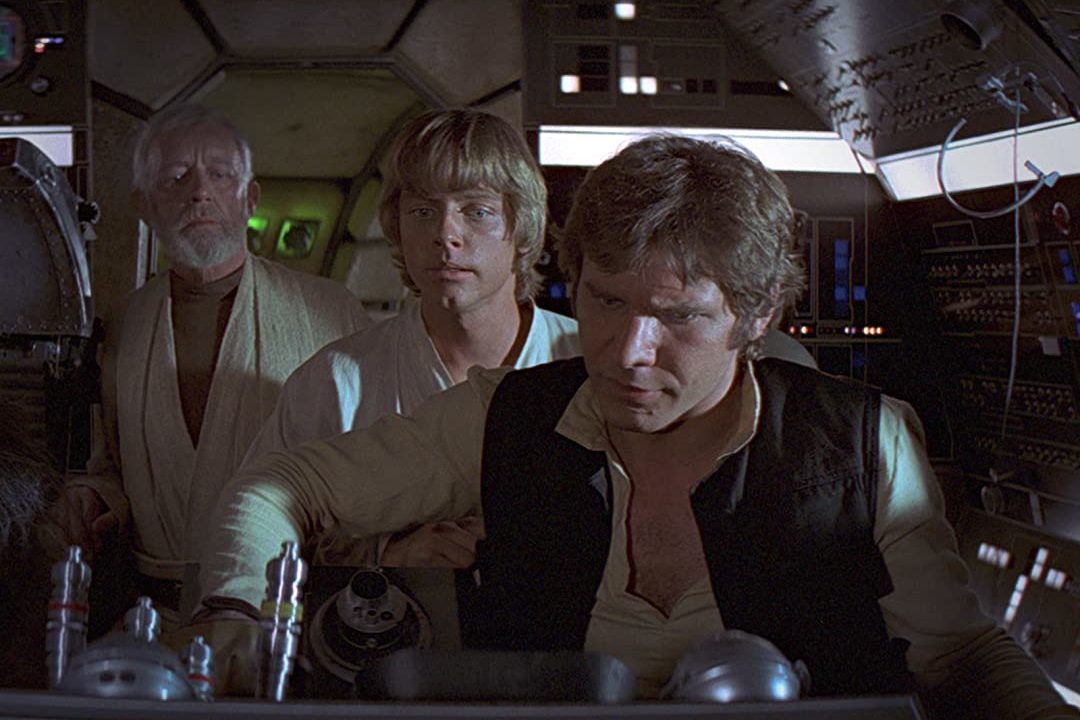 For moviegoers who have been following the franchise in order of each film’s release, there’s nothing quite like A New Hope. It’s the movie that got us hook, line, and sinker invested in Luke Skywalker, Princess Leia, Han Solo, Chewie, and the rest of the gang. Even though it isn’t the first story, cinematically this is the movie where it all began. Star Wars purists would prefer to get their hands on the original version of A New Hope, before George Lucas had it enhanced with CGI, but whichever edit you have, make A New Hope the third flick in your marathon. These are the Star Wars facts everyone gets wrong. 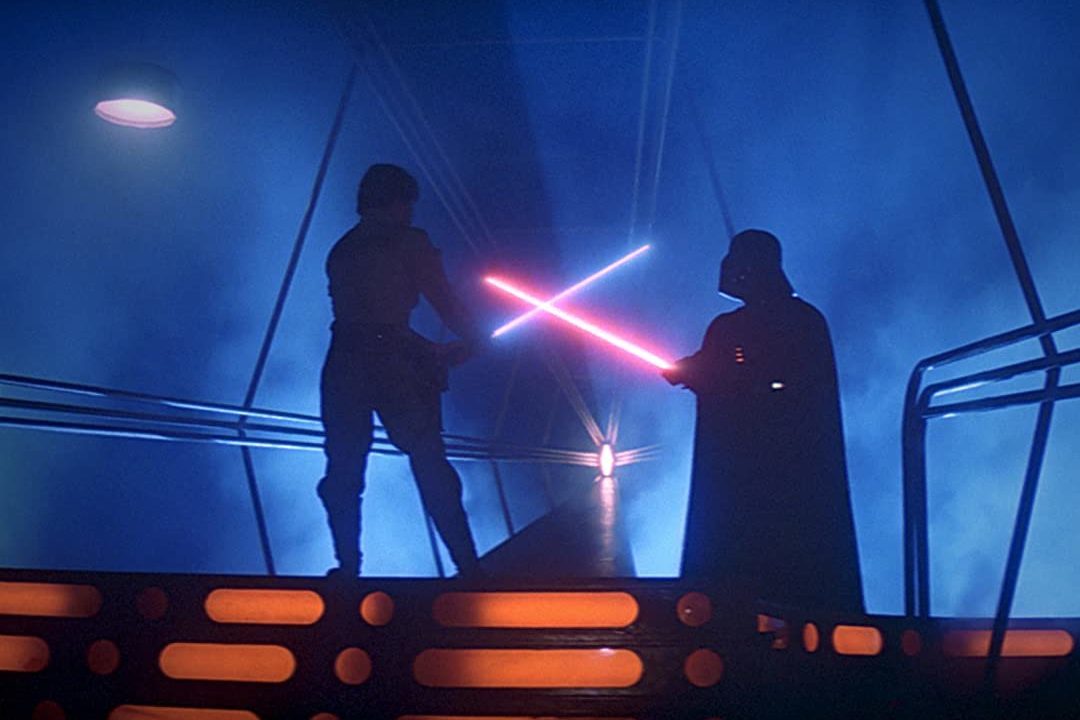 Episode V: The Empire Strikes Back

If we were purely listing the movies from the favorite to least favorite, The Empire Strikes Back would have held the top spot. Highly regarded as the best of the Star Wars movies, Episode V picks up where A New Hope leaves off, but is action-packed from start to finish. Luke, Han, and Leia find themselves attacked by the Imperial Force on Hoth when the latter two jet away in the Millennium Falcon. Luke, on the other hand, makes his way to the planet Dagobah to find Yoda. There’s a lot happening, which is what makes the movie so good. In fact, the book The Making of Star Wars: The Empire Strikes Back by J.W. Rinzler, even details the plight of the cast and crew to make Empire better than its predecessor A New Hope. Fans agree they succeeded. 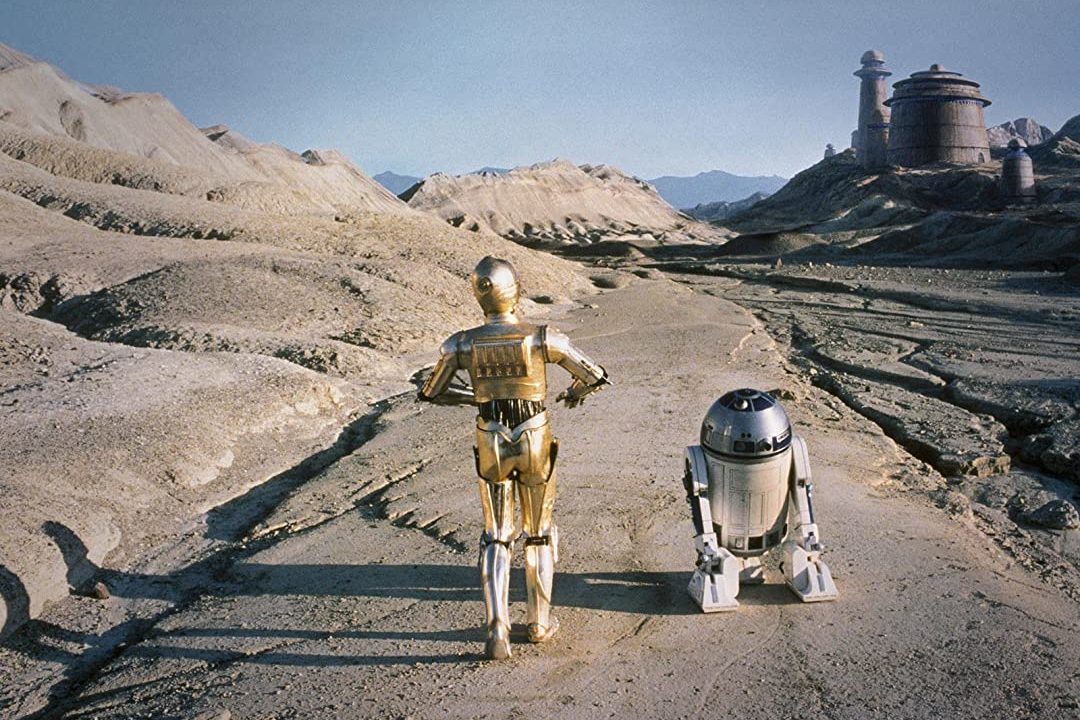 Empire VI: Return of the Jedi

The final film in the initial trilogy, Episode VI: Return of the Jedi hit theaters in 1983, and there’s simply no other film in the franchise that makes sense to place in between it and Empire, so we get to stay in chronological order. Fun fact about Return of the Jedi: It was filmed under the production name Blue Harvest: Horror Beyond Imagination. This was to throw off anyone trying to get an early look at the highly-anticipated movie. In this film, we meet the Ewoks, spend more time with Jabba the Hutt, and travel to Endor. These are 20 insightful Star Wars quotes every fan should know. 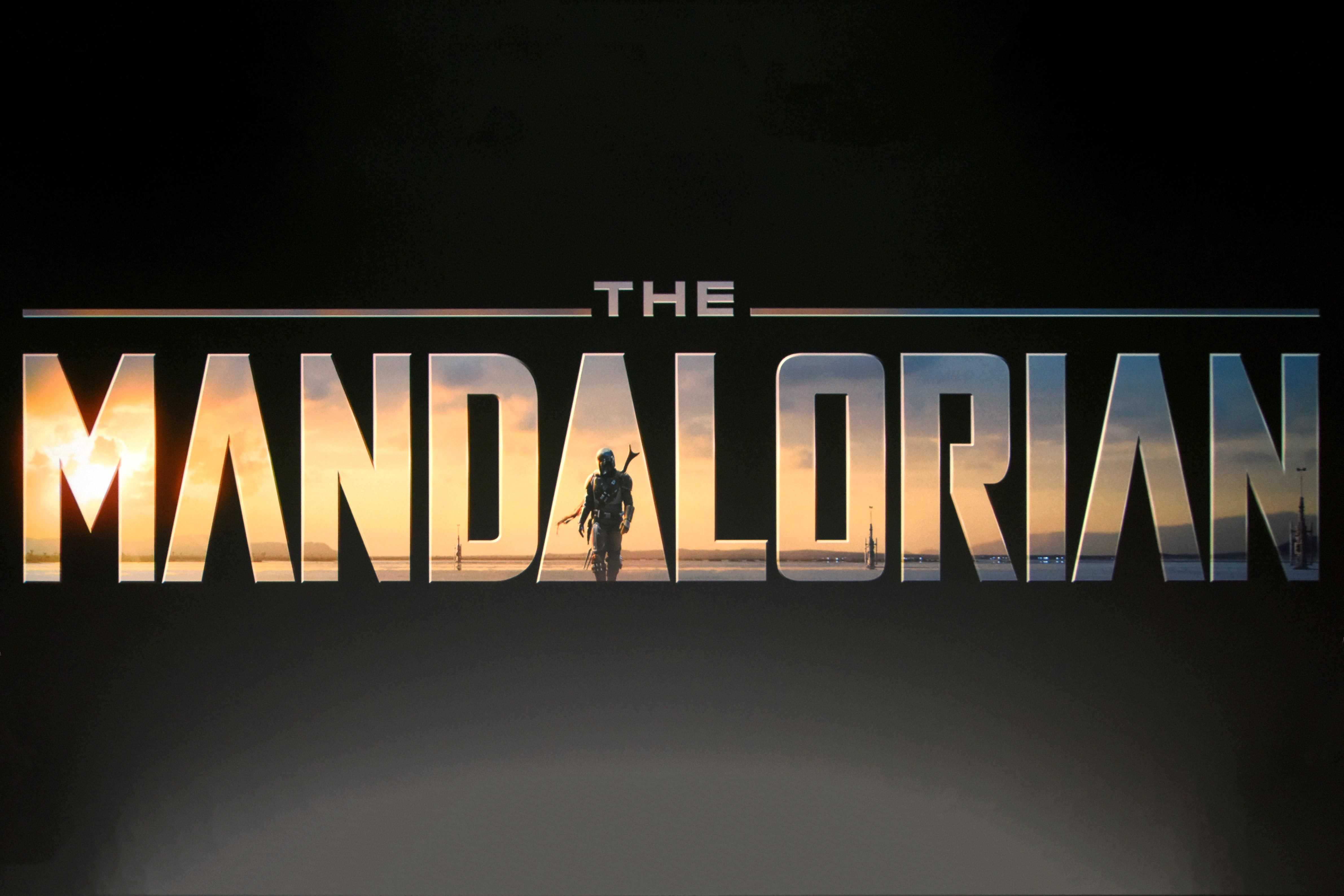 While not a film, we’d be remiss if we didn’t mention The Mandalorian TV series featured on Disney+. After all, it is the vehicle that gave us Baby Yoda. Described as a “space western,” it fits neatly between Episodes VI and VII, following the story of a lone gunfighter (a Mandalorian) traveling as far as he can from the laws and rulings of The New Republic. According to StarWars.com, Mandalorians are from, you guessed it, Mandalore, a planet on the Outer Rim that has been destroyed at the hands of neverending war. Season 1 of the series premiered in November 2019 and a second season is set to kick off later this year on the Disney streaming service. 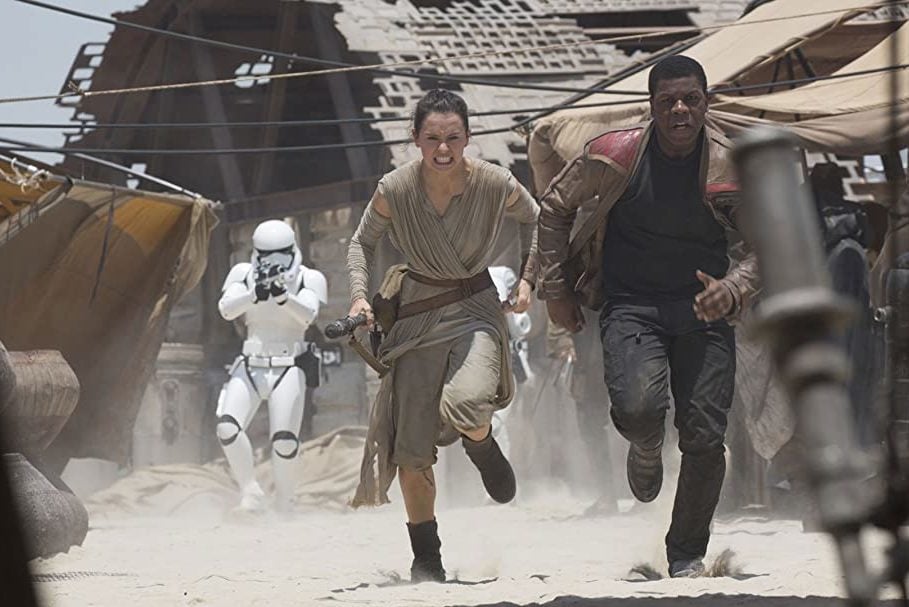 When the Star Wars franchise came back to the big screen in 2015, it was met with excitement and trepidation from fans. After the first three episodes (Phantom Menace through Revenge of the Sith) failed to excite fans in the same way that the initial films had, it’s probably safe to say moviegoers were braced for the worst. While you can’t please everyone, The Force Awakens did garner a new generation of young Star Wars fans and set the stage for an additional two films in the Skywalker saga. In this movie, we meet Rey, Finn, Poe Dameron, and Kylo Ren…and witness the heartbreaking demise of a beloved character. But, hey, can we get a cheer or two for the adorable droid BB-8? Star Wars has some iconic music—these are the movies with the most rockin’ soundtracks ever. 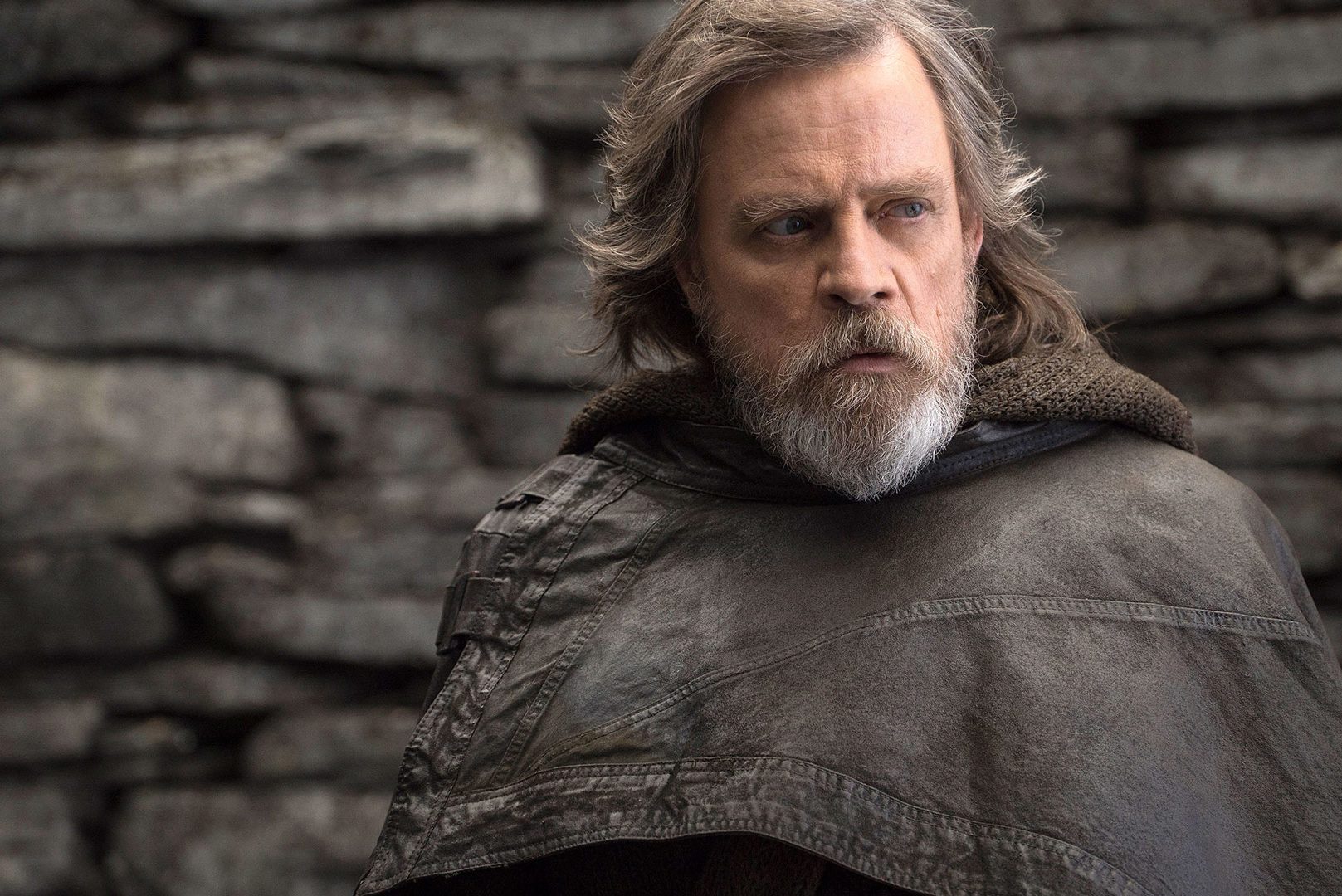 Yes, we’re sticking to the chronological timeline once again. Now that we know a little about Rey, Finn, and Poe, it’s time to take a deeper dive into what makes these characters tick. Oh yeah, and we can’t forget about Kylo Ren who is still antagonizing members of the Resistance. Luke Skywalker (hey, buddy!) is united with Rey who could use a little assistance harnessing her natural powers of The Force. And things get really messy between The First Order and the Resistance as they battle it out for galactic domination. 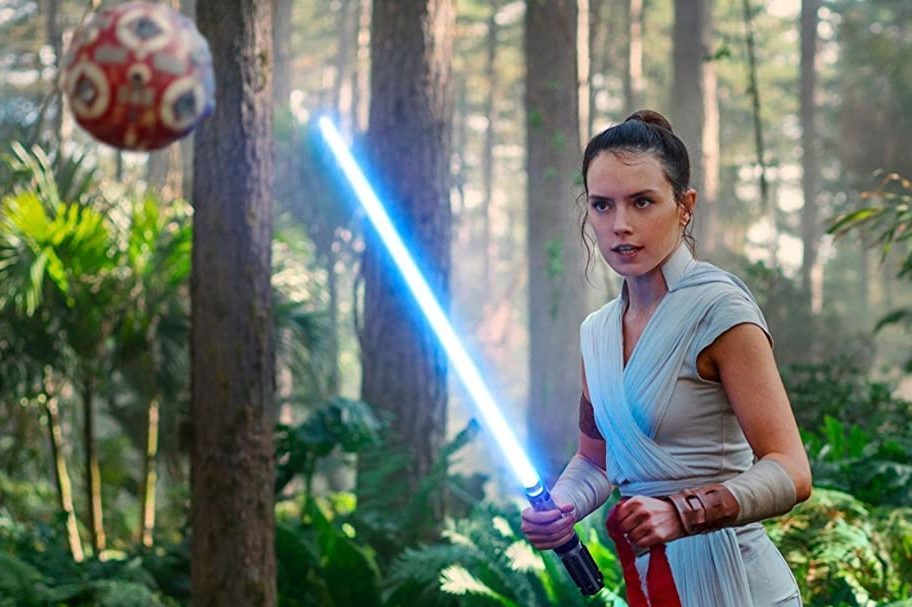 Episode IX: The Rise of Skywalker

It may have received mixed reviews but, according to Forbes, The Rise of Skywalker is currently the most popular movie in the United States (or at least The Digital Entertainment Group is reporting it was the most-watched movie at the middle of April 2020). Not too shabby for the final installment of the Skywalker saga. Billy Shaw, a Star Wars fan in New York City says, “Episode IX could easily have been two separate movies. Without giving away any spoilers, there’s something that happens within the first 10 minutes of the film that would have actually made for a great cliffhanger to a movie all its own.” Think you know everything about the silver screen? We bet this movie trivia will surprise you! 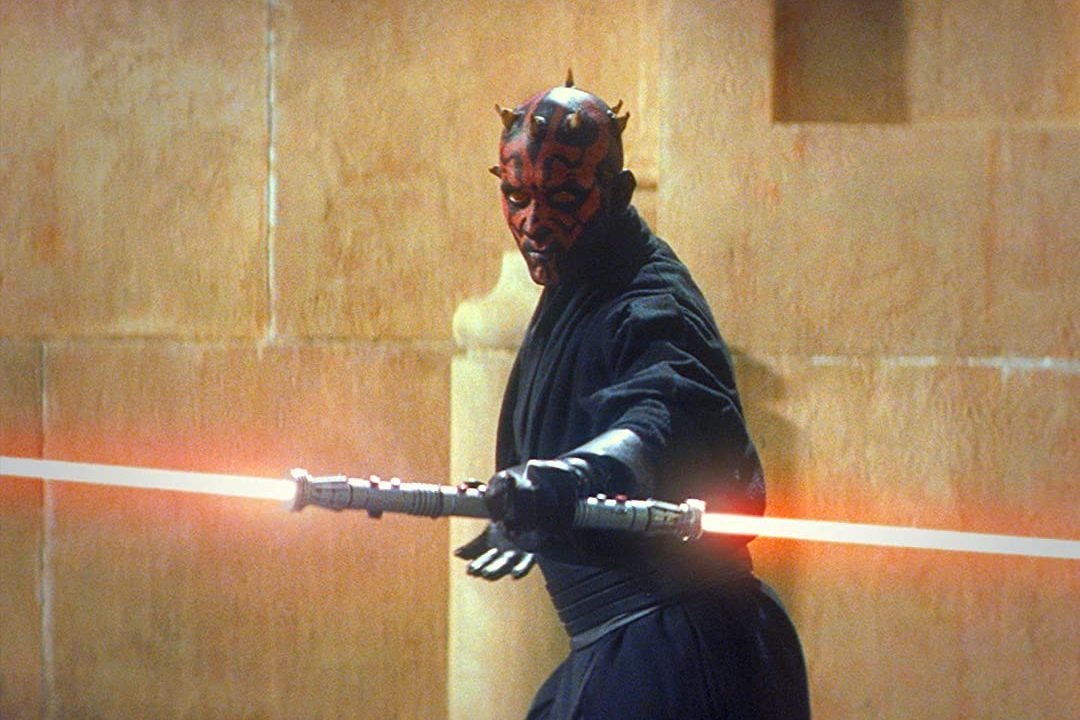 Episode I: The Phantom Menace

If it were up to some of the Star Wars fans we interviewed, Episodes I to III wouldn’t even appear on the list. “I would just watch movies 4, 5, and 6,” jokes movie buff Jackie Robb of New Jersey. But what can we say? We root for the underdog and so, at the very least, we have Episode I: The Phantom Menace here in the marathon lineup. After all, if you’re going to invest this much time in learning about the Star Wars universe, you have to go back to its roots, to learn Darth Vader’s backstory. Speaking of, it’s not just because these movies aren’t as enjoyable to watch that they’re on the list after the original three, despite taking place earlier in time; as anyone knows who has seen Return of the Jedi, there’s an epic surprise you wouldn’t want spoiled. 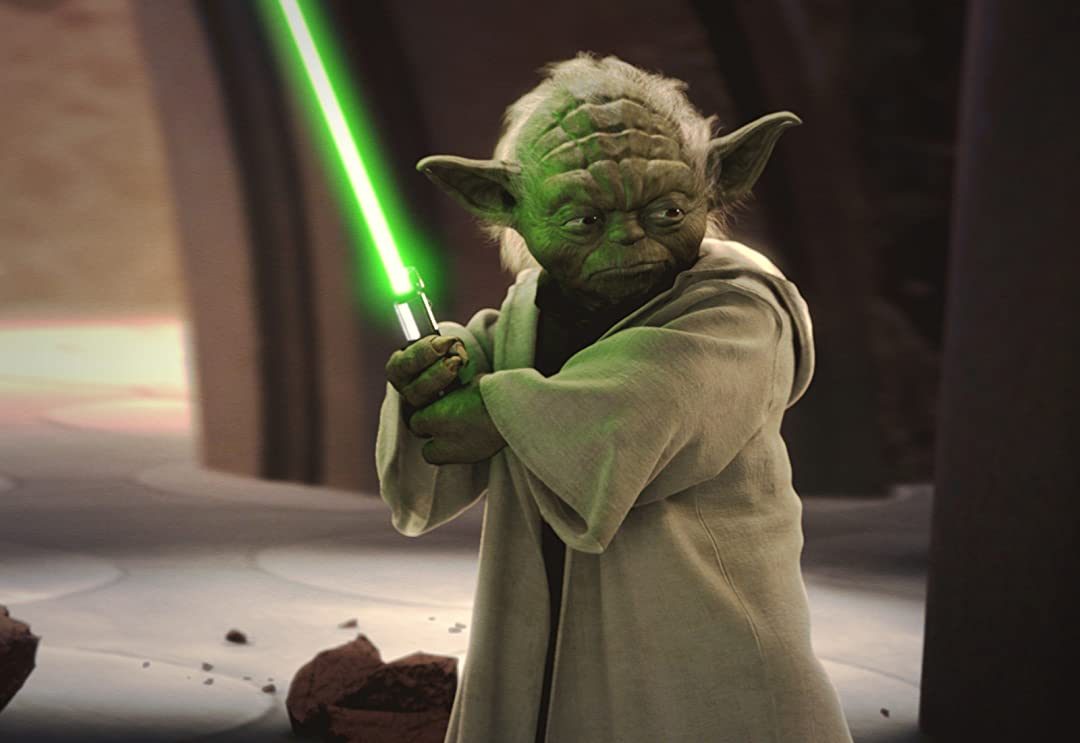 Episode II: Attack of the Clones

Lauded as the worst of the Star Wars movies, Attack of the Clones gets a bad rap, but not without reason. The second of the prequel trilogy, it starts off ten years after Phantom Menace leaves off. Fans say they tried to cram so much into this script that it’s totally unfocused and actually lacks plot instead of being heavy on it. On top of that, the dialogue is “meh,” the characters (sorry, Anakin and Padmé) aren’t all that interesting, and we don’t even get any super crazy villains to root against. But, if you have the time, sit through this one. Find out the 20 Star Wars filming locations that exist in real life. 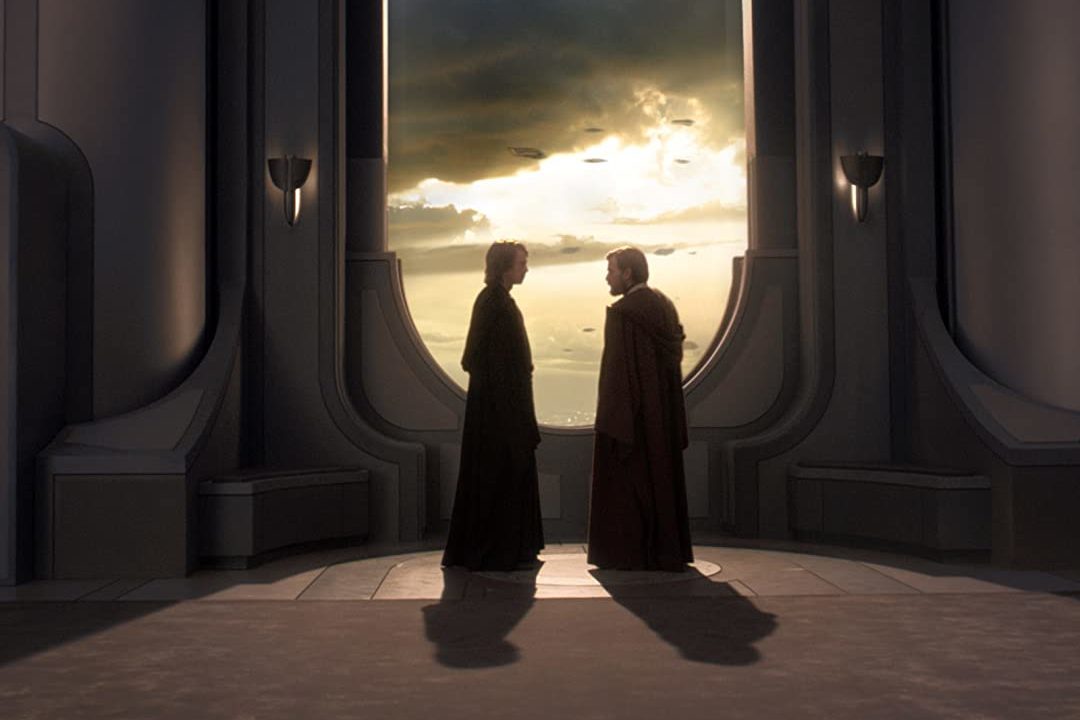 Episode III: Revenge of the Sith

Admittedly there are some fans who told us it’s worth watching Revenge of the Sith before Rogue One and after Solo, but largely it was lumped in with the rest of the prequel trilogy. Might as well watch it as the third installment of that segment of the franchise to bring you back full circle to the beginning (in case you want to start your marathon all over again). It’s also worth noting that if you want to round out your binge-watching experience with the animated Star Wars series you’d watch The Clone Wars between Episodes II and III. Star Wars: Rebels would fall between Solo and Rogue One, and Star Wars: Resistance is set just before The Force Awakens. Next, see if you can answer these 10 Star Wars questions from Jeopardy!