12 Restaurant Foods with More Sugar Than a Candy Bar

We know that some of these might be your favorites, but here's what you should try instead.

The typical candy bar has about 35 grams of sugar. That’s 7 teaspoons of sugar—or more than you should get in an entire day. What would you say if you knew your favorite restaurant dish has double or triple—or even quadruple—that amount? And we’re not only talking about the desserts.

High amounts of sugar can be added to beverages, even seemingly innocuous ones like a chai latte. Added sugars also tend to hide out big time in sauces, dressings, and even the batter on fish or fried chicken. Per day, women should take in no more than 25 grams of added sugar, while men should cap their daily intake at 36 grams.

Avoid overdoing the sweet stuff with this guide: We’ve highlighted the sugar kings at your favorite restaurants and suggested healthier, less sugary (yet still tasty) items to order instead.

A small 20-ounce serving of this smoothie contains 91 grams of sugar—while the large has double that amount, an alarming 182 grams. “This beverage sounds healthy but it contains turbinado, a fancy word for sugar,” says Becky Carney, RDN, a dietitian in Atlanta. The three types of fruit juice blends in the smoothie also contribute to the sugar content.

Eat this instead: “A good alternative would be the Lean1 Vanilla Smoothie,” says Carney. “The smoothie is made with real fruit, and the small only has 8 grams of sugar.” It also provides 20 grams of filling protein. Even if you go with a large, you’re only looking at 16 grams of sugar. Find out the healthiest things to eat at 25 fast-food restaurants.

“This latte is a popular alternative to coffee drinks at Starbucks,” says Emily Rubin RD, a dietitian in Philadelphia. “But a 16-ounce grande Chai Latte contains 42 grams of sugar. The sugar is from chai tea concentrate, which contains sugar, honey, and ginger juice.” The milk in the latte contributes natural sugar, aka lactose.

Eat this instead: Go for a tall 12-ounce Lightly Sweet Chai Latte. It’s a lighter version of the classic Chai Latte, with 23 grams of sugar. “An even lower-sugar option is a Chai Brewed Tea, says Rubin. “You still get the all the taste of chai tea without the added sugar.” If you’d like extra sweetness, add a splash of milk and even a pump of sugar-free vanilla syrup, suggests Rubin.

“While salads may always seem like a healthy choice, this one racks up 59 grams of sugar,” says Julie Harrington, RD, a culinary dietitian in Morristown, New Jersey. “Added sugar sneaks in with the barbecue sauce. Typically, two tablespoons of barbecue sauce can add 16 grams of sugar.”

Eat this instead: “Opt for southwest flavors, and enjoy a bowl of the Chile Lime Chicken Tortilla Soup with only 3 grams of sugar and 19 grams of filling fiber.” Add a tossed green appetizer salad with balsamic vinegar dressing, and your meal in total contains just 11 grams of sugar.

This cake is packed with a startling 146 grams of sugar, not to mention 1,690 calories—nearly a day’s worth. “This is slightly less than the maximum recommended amount of sugar for a woman to consume over an entire week,” says Kristen Smith, MS, RD, a spokesperson for Academy of Nutrition and Dietetics in Atlanta. “The large portion size of cake, candy toppings, and ice cream it’s served with are likely some of the contributors to the high sugar amount.” Here are 20 foods that are never worth the calories.

Eat this instead: “For a lower sugar and portion-controlled option, order dessert from the children’s menu,” advises Smith. “At TGI Friday’s, this is where you will find the dessert option containing the lowest amount of sugar. Choose the vanilla ice cream, but beware it will still set you back 39 grams of sugar, which exceeds the daily maximum amount recommended.” Order the two scoops sans chocolate or caramel sauce, and you’ll lower the dessert’s sugar content by a good amount.

Talk about a sugar bomb: A large strawberry milkshake contains 103 grams of sugar. This isn’t a surprise, given that the milkshake’s second ingredient is sugar—and the dessert contains other sugar sources, including whipped cream, corn syrup, and high fructose corn syrup. “All the milkshakes at Chick-fil-A have at least 59 grams of sugar,” notes Jennifer McDaniel, MS, RDN, CSSD, a dietitian in St. Louis, MO.

Eat this instead: Order a small Ice Dream Cone, with 17 grams of sugar. “You still get the creamy ice cream but in a smaller portion,” says McDaniel. “And eating ice cream in a cone, versus in a drink, provides crunch factor. People tend to get pleasure out of a variety of textures. It’s also possible that the cone will take you a bit longer to enjoy and savor, compared with slurping down a drinkable dessert.”

“While Red Lobster isn’t really known for health food, most of us know seafood is a healthier thing to eat,” says Laura Yautz, RD, a dietitian in Pittsburgh. “That may be true, but the new Lobster in Paradise entree packs in 39 grams of sugar, along with 1,040 calories! The dish contains crispy coconut lobster and shrimp, with sugar in the batter, and a coconut dipping sauce that also contains sugar. And it’s served with chili-ginger grilled jumbo shrimp, with more sugar in the chili-ginger sauce.” Here are some other things you shouldn’t eat at a restaurant.

Eat this instead: “To keep both the sugar and calories down—and get your lobster fix—try the new Lobster-Topped Tilapia,” says Yautz. It has only 2 grams of sugar and 350 calories. “As a bonus, it’s also got half the sodium content of Lobster in Paradise,” notes Yautz. “You get your choice of two sides, so you can even afford to splurge a little with one of them.”

“Many fast-food salads are loaded with hidden sugars, and this one is no exception,” says Stephanie Dillingham, NDTR, a nutrition and dietetics technician in Lafayette, CO. Sure enough, this salad has 40 grams of sugar. “The sugars come from the pomegranate vinaigrette salad dressing, the roasted honey pecans, and the dried cranberries,” says Dillingham.

Eat this instead: “A healthier alternative is the Grilled Chicken Wrap,” says Daniela Novotny, DHSc, MS, RD, an instructor of biomedical sciences at Missouri State University. “Like the salad, it also has grilled chicken breast with lettuce.” But this pick has just 3 grams of sugar. “It’s a lighter option with a good balance of protein and carbs,” says Novotny. See healthy fast-food options at popular restaurants.

“The word ‘cake’ is your first tip-off that this is going to be a sweet treat,” says Joan Salge Blake, EdD, RDN, a clinical associate professor of nutrition at Boston University and host of the podcast Spot On!. “Each muffin weighs in at 590 calories and 51 grams of sugars.” The muffin also contains high fructose corn syrup, as well as sugar in the streusel topping.

Eat this instead: If you think a muffin is always a healthier choice than a doughnut, think again. A French Culler doughnut has 220 calories and just 10 grams of sugar. Or “stick to one or two of those adorable Cinnamon Munchkins, which is only 60 calories and 2 grams of sugar for each,” says Salge Blake.

With 70 grams of sugar and 1,140 calories, you may want to rethink ordering this overly sweet sundae. “The sugar comes from the ice cream and fudge,” explains Ryan Whitcomb, MS, RD, CLT, a dietitian in Jersey City, NJ.

Eat this instead: A good alternative is the Single Scoop of Hunka Chunka PB Fudge, with 20 grams of sugar and 360 calories. “This still has quite a bit of sugar, but it’s better than the original,” says Whitcomb. “You can enjoy it without the guilt.” And you get to spoon into that peanut-buttery, fudgy deliciousness. See the 12 healthy desserts that can actually help you lose weight.

Lemonade is often sweetened with sugar, and this one is no different. A large 32-ounce beverage contains 56 grams of sugar. Two of the four ingredients (sugar and agave nectar) in the drink’s agave lemonade base are added sugars. “You also get a minimal amount of sugar from cold-pressed lemon juice,” says Hope Warshaw, MMSc, RD, CDE, a diabetes educator in Asheville, NC, and author of Eat Out, Eat Well.

Eat this instead: Opt for the Plum Ginger Hibiscus Tea, naturally sweet with no sugar. “Don’t sip and slurp your calories,” advises Warshaw. “Panera has a variety of beverages to choose from with next to no calories and added sugars.”

With the BBQ sauce, this dish is loaded with 72 grams of sugar. Drop the sauce, and there’s also a huge drop in sugar—down to 15 grams total. “The BBQ sauce contributes to the overall higher sugar content of the platter, as it contains honey, ketchup, and brown sugar,” says Crystal Karges, MS, RDN, a dietitian in San Diego.

Eat this instead: “An alternative menu item that is lower in sugar content is the Bourbon Street Steak,” says Karges. “Instead of using a BBQ sauce, the steak is grilled with Cajun spices and garlic butter, significantly lowering the sugar to a total of 5 grams. Sirloin steak, which is the cut of meat used for the dish, is also lower in total fat and saturated fat, compared to the riblets.”

This pancake stack may win the award for highest sugar content, with 184 grams. The sugar comes from the cinnamon crumb topping, whipped cream, and an entire pitcher of cream cheese icing.

Eat this instead: “The Hearty 9-Grain Pancake Breakfast has a fraction of the sugar content, at 21 grams”, says Rachel Fine, RD, a dietitian in New York City. It also has just 410 calories, versus the 1,350 calories in the cinnamon roll pancakes. Find out the 57 secrets your restaurant waiter isn’t telling you. 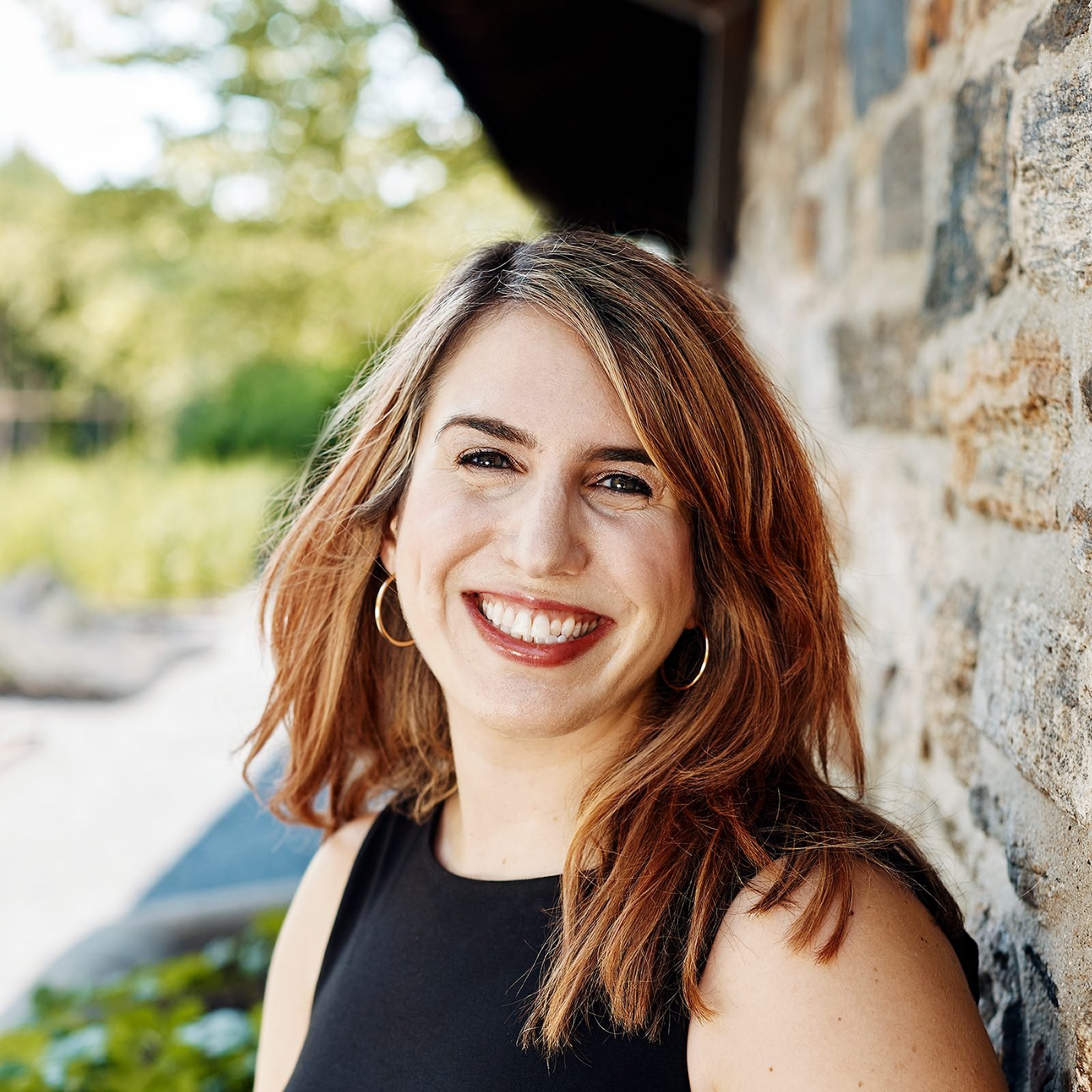 Amy Gorin, MS, RDN
Amy Gorin, MS, RDN, is a registered dietitian nutritionist in the New York City area and writes regularly about nutrition for Reader’s Digest as well as for Food Network, Everyday Health, NBC News, and other sites. Gorin is a former nutrition and health editor for publications including Health, Prevention, and Parents. In addition to freelance writing, Gorin is regularly quoted in the news and has completed more than 1,000 media interviews. She completed her nutrition education at New York University and Utah State University, earned an MS in Journalism from Northwestern University, and holds a BS in Journalism and a BA in Visual Art Studies from the University of Florida.