15 Surprising Facts About Your Favorite Superheroes

It's a bird, it's a plane, it's...some pretty cool facts about the fictional crime fighters who have been entertaining audiences for decades. Ka-pow!

The curious case of kryptonite

You don’t have to know that much about Superman to know that kryptonite is his weakness. What’s interesting is the way in which the evil stuff was first introduced. While it appeared in the Superman comics as early as 1949, kryptonite first became a thing when the voice actor who played the superhero in the radio show The Adventures of Superman needed a vacation. According to Nerdist, it was in 1943 that the show debuted kryptonite, a deadly mineral, using a stand-in who simply had to moan in pain until the original actor returned from his trip.

Believe it or not, Batman’s real name, Bruce Wayne, has historical roots. He was named for Scottish national hero Robert the Bruce and Mad Anthony Wayne, a hero of the American Revolution, according to IGN. And if you’re wondering how the Caped Crusader navigates social media, his screen name, used in the comics, is JonDoe297.

It wasn’t a real-life spider that inspired Stan Lee to create Spider-Man, but rather a winged insect that he noticed crawling along a wall at Marvel HQ. When Lee spied the bug, he considered that his next superhero should be one that can stick to vertical surfaces. After toying around with several different names, the comic book genius landed on Spider-Man. And the rest, as they say, is history.

The many roles of Wonder Woman

Wonder Woman’s alter ego, Diana Prince, has held a slew of different jobs over the years, and not all were super glamorous, according to Mental Floss. At various times, she worked as a romance novel writer, fast food employee, singer, spy, and, most famously, as the secretary of the Justice League. These days, Wonder Woman’s job opportunities are, thankfully, limitless.

The superhero we know and love as Captain America almost had a very different moniker. The shield-wielding dude was originally created in 1940 as a response to World War II (so this guy has heaps of history) but was first named Super American. The name didn’t last long because the creators felt there were too many superheroes using “super” in their ID. Captain America was born.

When Tony Stark designed the Iron Man suit, he pretty much thought of everything a superhero could possibly need to fight the bad guys. In fact, Screen Crush asserts that the Iron Man suit can actually lift an impressive 100 tons when operated by its owner. In later years, Stark made improvements on the suit (because that’s what tech geniuses do) with Hulkbuster armor so that he could lift 175 tons in an effort to combat, you guessed it, the Incredible Hulk.

Fans know Thor is a massive dude (Marvel.com says he’s 6’6 and 640 lbs) and holds tremendous strength, but did you know he’s one superhero that was actually able to accomplish the unthinkable? At one time, Thor (using the magical power of the Odinforce) put a dent in Captain America’s practically-impossible-to-destroy shield using Mjolnir. Pretty crazy stuff! Now, prepare to be amazed by these incredible photos of disabled children as superheroes.

Sure, they’re both superheroes, but something else links Black Panther and Captain America. They each utilize the power of Vibranium to aid in their good guy antics. Black Panther wears a Vibranium uniform, claws, and boots, while Captain America’s shield is made of the super-strong stuff. In fact, Black Panther’s home of Wakanda mines Vibranium, making them one of the richest nations on Earth (in the comics, that is). But you don’t need to be in a comic book to have superpowers. Check out these amazing (and real!) animals with actual superpowers.

If you’ve ever wondered how Star-Lord can be one of the Guardians of the Galaxy without wearing some type of helmet to survive in space, Marvel.com might just have the answer. He did wear a costume to help his space survival and that ensemble may have changed him physically, making it easy for him to zoom through air and space.

Meet me in the middle

Did you know many of your favorite superheroes have middle names? Spider-Man’s real-life alias is Peter Benjamin Parker, and Hulk’s full moniker is Robert Bruce Banner. Superman’s middle name is Joseph, while Iron Man is Anthony Edward “Tony” Stark. If you want to get formal with Daredevil, he goes by Matthew Michael Murdock, and Star-Lord’s birth certificate reads Peter Jason Quill. Here are more movie trivia facts you won’t believe are true.

There have been many differing storylines for Batman over the years, between the comics, radio shows, television series, and movies. In one comic series, he even married Catwoman, according to Moviefone. The two had a child together, a daughter named Helena, who eventually grew up to be comic book character The Huntress. These untold stories of real Native American heroes will open your mind.

It’s not easy being grey

Hulk, as we best know him, is a green superhero powerhouse, but that wasn’t always the case. When he was originally drawn for the comics, Hulk was actually grey. Unfortunately, the grey ink didn’t print very well, so the big guy was changed to the green hue we know today. We think that was a “smashing” idea. 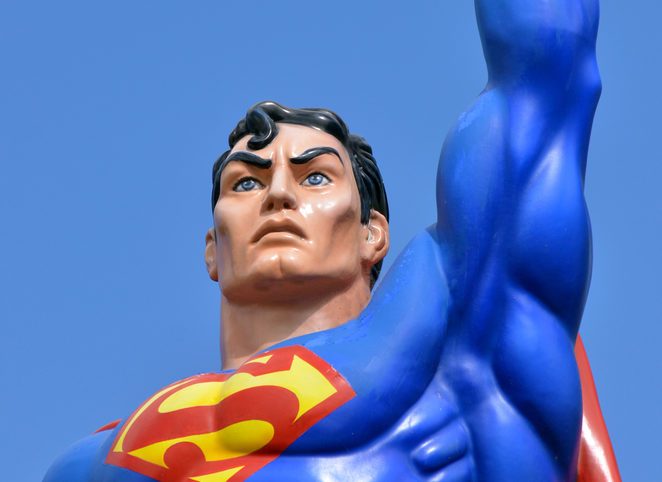 It’s hard to imagine a time when Superman couldn’t speed through the air, but originally the Man of Steel only had the power to leap tall buildings with a single bound (which, let’s face it, is still pretty impressive). But when artists set out to animate Superman for a cartoon in the 1940s, they decided it was too difficult to draw him bending his knees to jump. They gave him the ability to fly in an effort to make the animation seamless. Don’t miss these classic quotes from your favorite movies and TV shows.

The Flash vs. Superman

Superman is supposed to be faster than a speeding bullet, but The Flash is The Flash! So who is the faster superhero? The winner is…The Flash. During a race between the two in The Flash: Rebirth, The Flash speeds past Superman, proving he’s the quickest superhero there is. Superman claims he previously beat The Flash in other races, but the scarlet speedster reminds him that those competitions were for charity, meaning he basically let the Man of Steel win.

If you’re familiar with Iron Man, you know that Tony Stark refers to his artificial intelligence system as JARVIS. The name sounds sophisticated (much like Stark himself) but what JARVIS actually stands for is anything but. It’s simply an acronym for Just A Rather Very Intelligent System. Hey, when it works, it works. Next, see if you know these 15 pop culture trivia questions people always get wrong.