Celebrate International Whale Shark Day by planning a bucket-list trip to swim with the world's largest fish. Do your research beforehand so you're assured that the destination and operator you choose have rules that don't put the endangered sharks at risk. 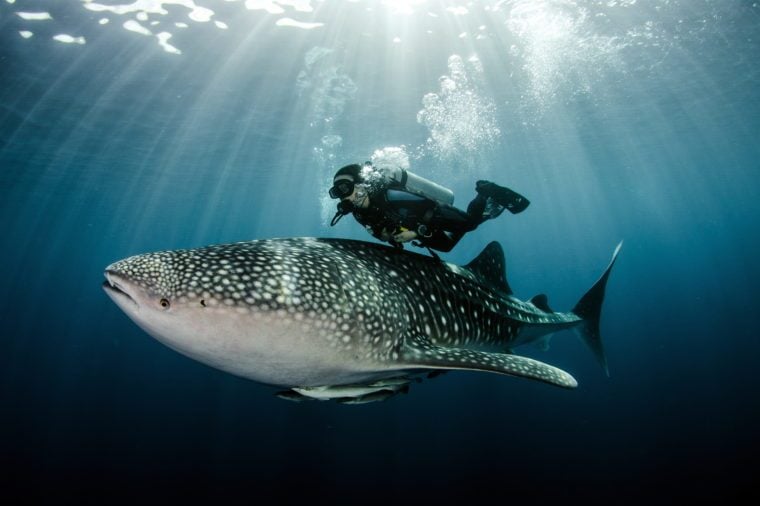 Can you safely swim with whale sharks?

There are many places in the world where you can swim with these gentle giants, but it’s important to choose destinations and operators that practice responsible tourism to protect these endangered animals.

Interfering with a wild animal’s natural behaviors puts the animal at risk, even if, like whale sharks, the animals seemingly don’t notice human presence. That’s one of the reasons it’s important to look for a certified tour operator when possible. Though not all countries offer it, the U.S. federal government and the Mexico national park service certify tour operators in their respective countries, for example. Swimming with whale sharks is one of the 18 one-of-a-kind adventures to add to your bucket list. 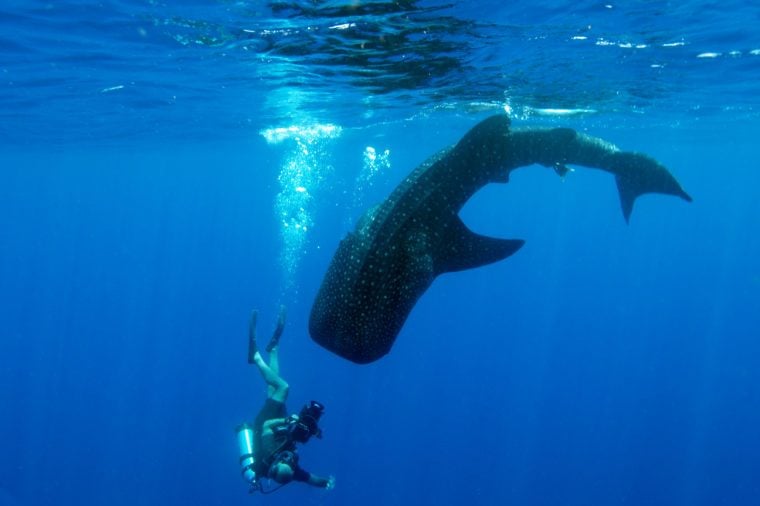 Boat operators shouldn’t feed the sharks to lure them, shouldn’t crowd the animals, and should ensure their boat placement always leaves an escape route so the whale shark can leave when it wants to.

Swimmers should ensure flashes on cameras are disabled, keep their distance, never touch the animals, and not wear sunscreen or lotions. Swimmers should take particular care to stay away from a whale shark’s tail. Not knowing you’re behind it, the whale shark could accidentally hit you as it swings its tail from side to side. If you want to avoid swimming with the dangerous type of shark, be aware of the most shark-infested waters in the world. 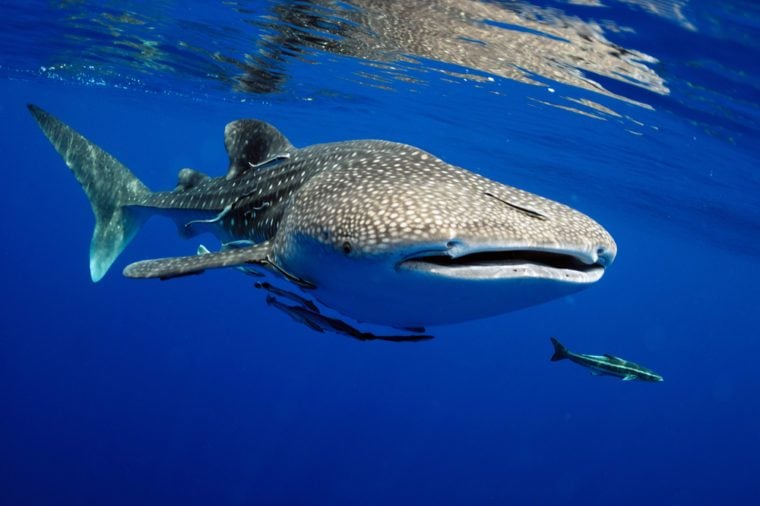 La Paz, on the eastern side of the Baja peninsula, actively enforces Mexico’s whale shark rules, making it one of the most ethical places in the world to get close to whale sharks. For example, only one boat can approach a whale shark at a time with a maximum of five swimmers in the water. Only licensed boats with operators who have taken a whale shark sustainability course are allowed into the whale shark area, and they must adhere to set time limits.

Whale sharks love the plankton-rich waters of the Sea of Cortez, which Jacques Cousteau called “the world’s aquarium.” Whale sharks have been spotted near La Paz year-round, with the majority visiting from October to April. One of the whale sharks’ favorite places to congregate is a spot within sight of downtown La Paz and its seaside Malecon. It takes just a couple minutes by boat to get there, and you’re likely to see humpback whales and other marine life on the way.

The laid-back town of La Paz has plenty to offer tourists, particularly those who love wildlife. At the nearby UNESCO biosphere reserve Espiritu Santo, snorkelers can swim with sea lions. Stay at Costabaja Resort & Spa, close to the beach, a marina, golf, and a selection of great restaurants. The Cortez Club provides trips to Espiritu Santo and the whale sharks. 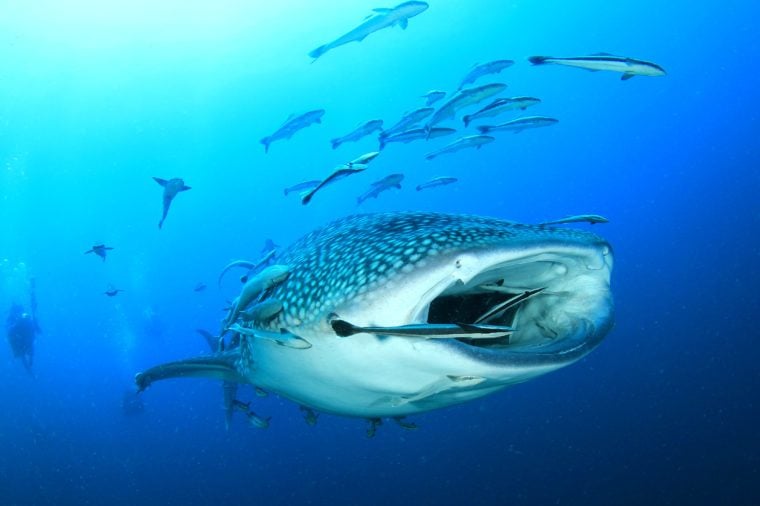 From June to September, whale sharks come to the island of Isla Mujeres, a ferry ride from the resort city of Cancun. There’s a whale shark festival every July, and the season for swimming with the sharks runs from mid-May to September.

Whale sharks and other fish were traditionally caught for food, but islanders realized that attracting tourists was a better way to utilize their resources. To help ensure the sharks’ safety, volunteers distribute information to increase awareness of good practices. Not all Cancun-area tour operators have a reputation for following the rules. Sharkside.com provides advice on choosing a responsible whale shark trip in the area.

You can stay on Isla Mujeres or on the mainland. Hotels north of Cancun offer a shorter boat ride to the sharks. A stay at Grand Residences Riviera Cancun is near snorkeling at the Puerto Morelos Reef National Park.

Whale sharks are also found around Isla Holbox and Isla Contoy, off the northeastern tip of the Yucatan peninsula. Because it’s harder for tourists to get there, crowds are smaller. Whale sharks aren’t the only sharks that aren’t scary—check out these 20 fascinating (and reassuring) facts about sharks. 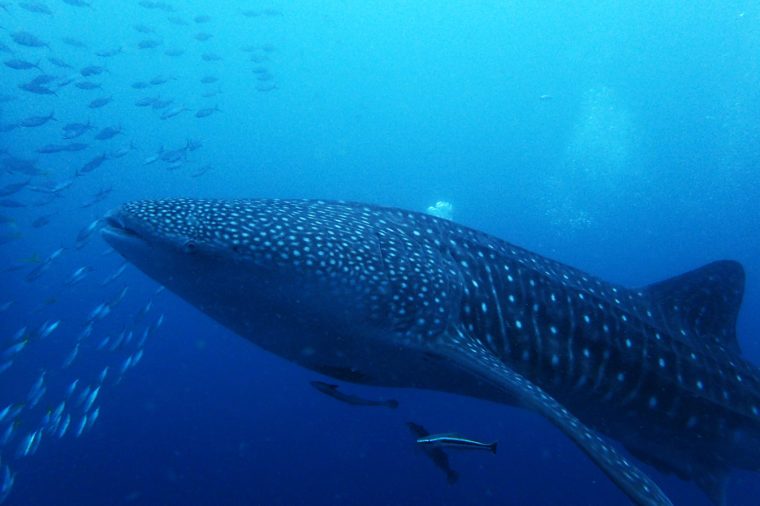 The Maldives is another country where you can swim with whale sharks ethically and safely. The Maldives has three Marine Protected Areas for whale sharks which allow only snorkeling (no scuba diving) and with restrictions on the number of boats that can visit. For example, at Hanifaru Bay (where whale shark season is May to November), boats from resorts are allowed to visit one day while safari boats and guesthouse boats are allowed the next.

Our pick for a place to stay is LUX South Ari Atoll, which arranges whale shark trips with marine biologists. It’s possible to see whale sharks year-round in the Maldives, particularly at South Ari Atoll where the peak time is between August and November. Booking your next vacation? Find out what it’s like to swim with manatees. 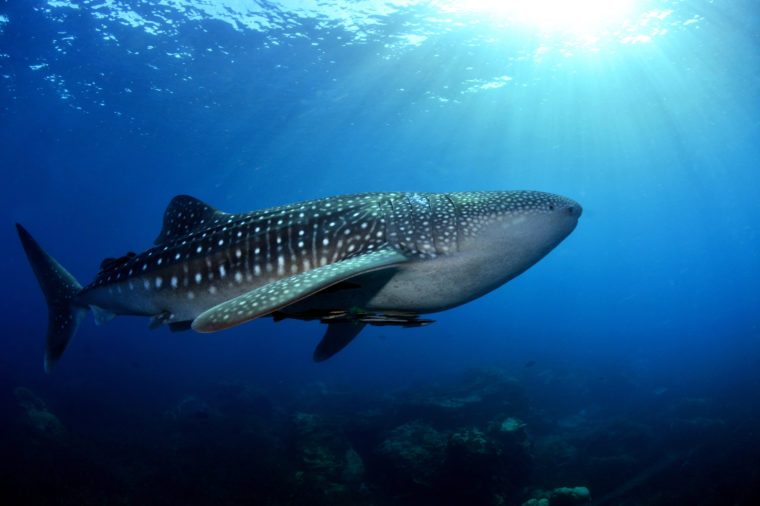 While it is possible to see whale sharks near the well-known island of Roatan (especially from October to December), the Honduran island of Utila is known as “the whale shark capital of the Caribbean.” Whale sharks swim around Utila year-round and are studied by the Whale Shark and Oceanic Research Center (WSORC). They can often be seen quite close to shore on the north side of Utila. Honduras is one of the most popular travel destinations in Central America, especially for people wanting to admire the country’s rich underwater life. 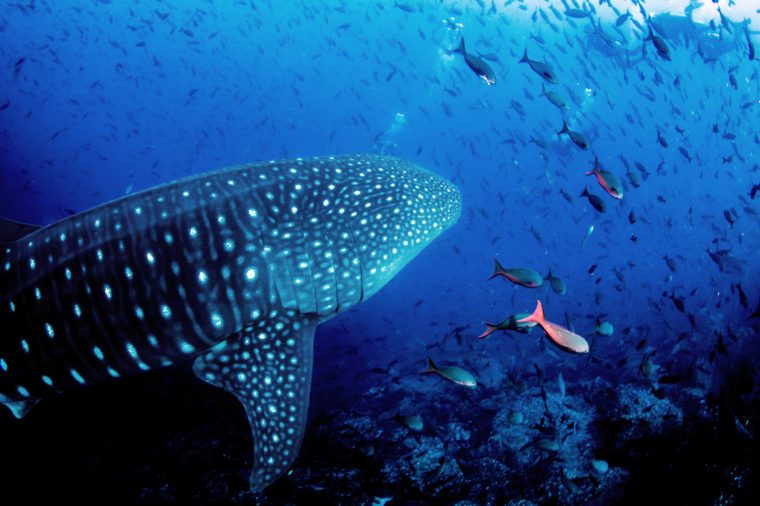 Most whale shark swimming experiences elsewhere in the world are with juvenile male sharks. For some reason, the majority of sharks that visit Galapagos are female and, if they’re old enough, they’re almost all pregnant, as the Galapagos Whale Shark Project has discovered. The peak time for Galapagos whale sharks is from June to December, and they’re especially found around Wolf Island and Darwin Island, at the north of the archipelago, located about 700 miles off the coast of Ecuador.

There are no accommodations on Wolf or Darwin islands and the distance is too far for a day trip. That means you’ll need to book at least an overnight trip on a boat; the Galapagos Whale Shark Project has week-long excursions. 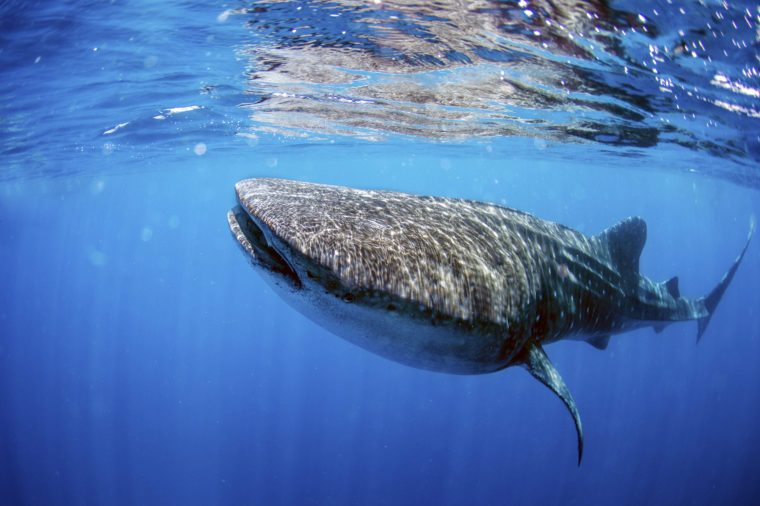 From March to June, whale sharks feed within the Gladden Spit and Silk Cayes Marine Reserve in Belize, with the peak period being April and May. DestinationWildlife.com describes how the sharks like to feed on snapper eggs, which spawn predominantly around the full moon. This means whale shark sightings are most frequent three days before and three days after the April and May full moons. Belize enforces rules to ensure the whale sharks are protected. Enjoy the island life before and after your whale shark swimming at Cayo Espanto. Check out these incredible up-close photos of whale sharks in the wild. 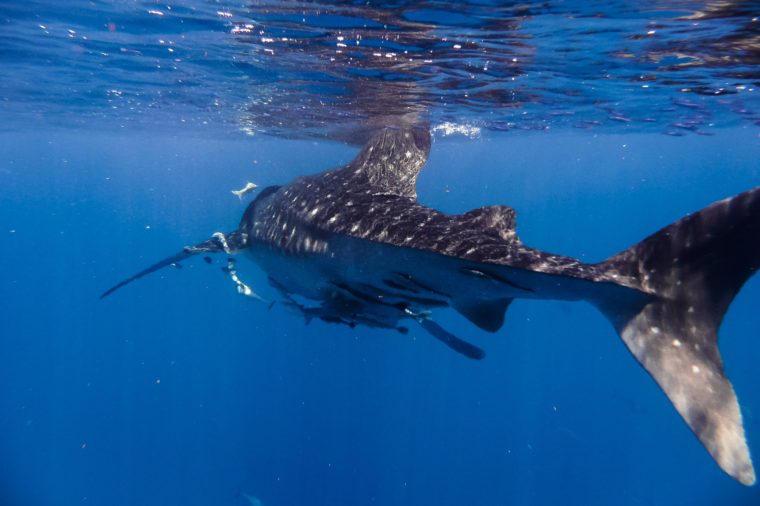 While whale sharks are year-round visitors to Mafia Island off the coast of Tanzania on the eastern coast of Africa, the peak season is October to February. The giant fish are called papa shilingi—coin shark—by local residents because the whale sharks’ spots resemble coins.

The Mafia Island Marine Preserve helps protect whale sharks and the year-round sightings provide scientists with lots of research opportunities, reports National Geographic. The barrier reef and marine preserve surrounding the island have a rich marine life so there’s lots to see with a snorkel and mask. 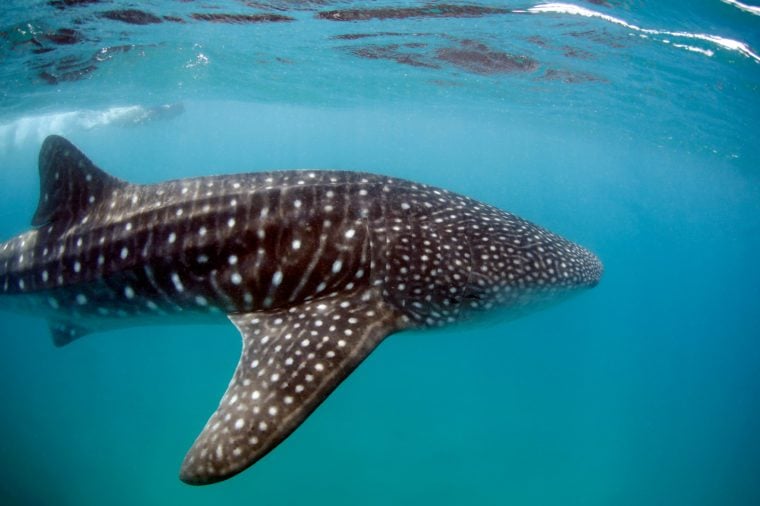 The country known for its lemurs, including one of the cutest tiny animals from around the world, also has the world’s biggest fish. Whale sharks visit Nosy Be (which translates to Big Island in the Malagasy language) from October to December. The archipelago is home to a vast array of marine life, including rare Bryde’s and Omura’s whales. The Madagascar Whale Shark Project leads research and conservation efforts in the area. Oceane’s Dream is a liveaboard boat catering to scuba divers that knows how to find Madagascar’s most impressive marine life. 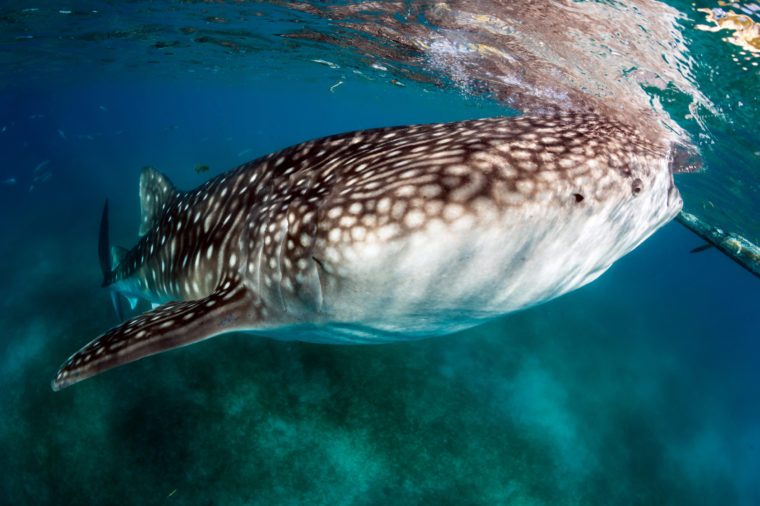 Mozambique, in east Africa near Madagascar, is home to whale sharks year-round. From around October until February/March, whale sharks frequent the waters off Tofo Beach. It’s near the city of Inhambane, which a Portuguese explorer dubbed Land of Good People (“Terra de Boa Gente”) in the 15th century. The Marine Megafauna Foundation is also based here. From October to April, whale sharks also swim in the Bazaruto Archipelago. Mozambique’s whale shark conservation rules allow scuba diving in addition to snorkeling. When planning your trip, keep in mind that cyclones are more frequent in February. Stay at Anantara Bazaruto Island Resort and you’ll be surrounded by marine life in the Bazaruto Archipelago. 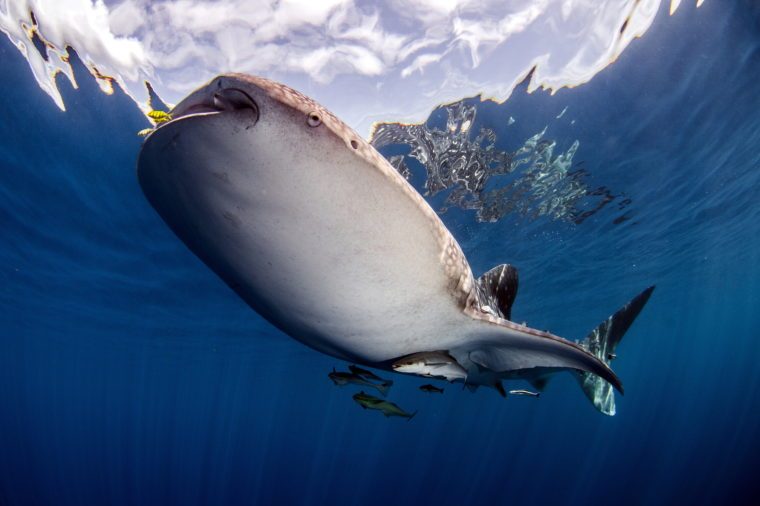 From mid-March to mid-July, whale sharks feed on the spawning corals in the UNESCO-protected Ningaloo Marine Park on the northwest coast of Australia. Visitors can swim with the whale sharks and, in the later part of the season, spot humpback whales, which spend June to November in the area. The resort town of Exmouth has a whale shark research center and a whale shark festival every May. Stay near Exmouth or further south in Coral Bay—our pick is the Ningaloo Reef Resort. 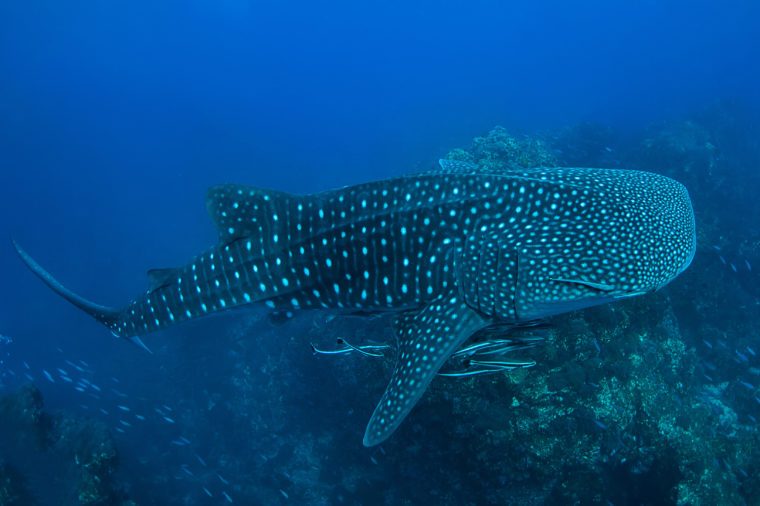 Thailand’s western coast has whale sharks throughout the year, though more are seen between January and April. Whale shark excursions leave from popular Koh Lanta, Koh Samui, and Koh Phi Phi, or you could choose to base yourself in places like Koh Tao, Koh Phangan, or the Similan Islands, according to the Professional Association of Diving Instructors (PADI). Diving and snorkeling with sharks are both allowed in Thailand. In Koh Tao, try Jamahkiri Resort & Spa with snorkeling offshore and an on-site PADI dive center. Before swimming with whale sharks, learn these incredible facts about them.