10 Things That Must Happen When a Supreme Court Justice Dies 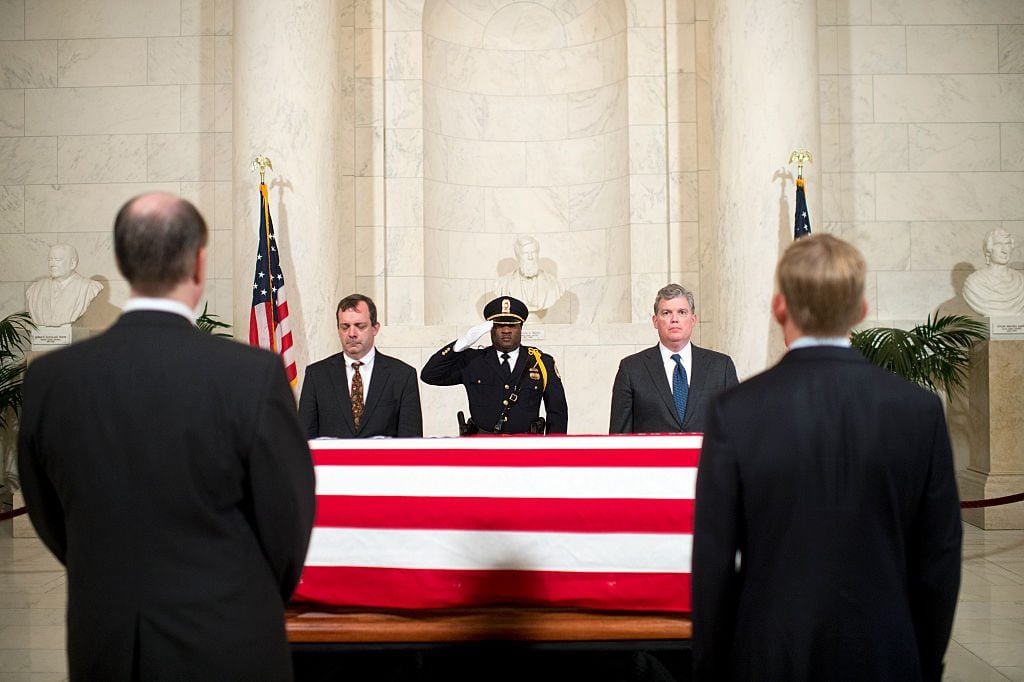 Americans mourned the loss of legendary U.S. Supreme Court Justice Ruth Bader Ginsburg when she died in office at age 87 in September. Similarly, Justice Antonin Scalia died at age 79 in 2016 while still serving on the SCOTUS, and Chief Justice William H. Rehnquist died in 2005 at age 81. With just a handful of years separating the deaths of these icons, Americans could be forgiven for believing that vacancies on the Supreme Court caused by death are common, when the opposite is actually true. Prior to Rehnquist’s death, the last SCOTUS justice to die in office was Robert Jackson, in 1954. In fact, since 1900, only nine justices have died in office, while the remainder simply retired. Perhaps because it’s relatively rare, traditions surrounding the death of a Supreme Court justice aren’t as robust as when a president dies. You can count on the following things happening, however. 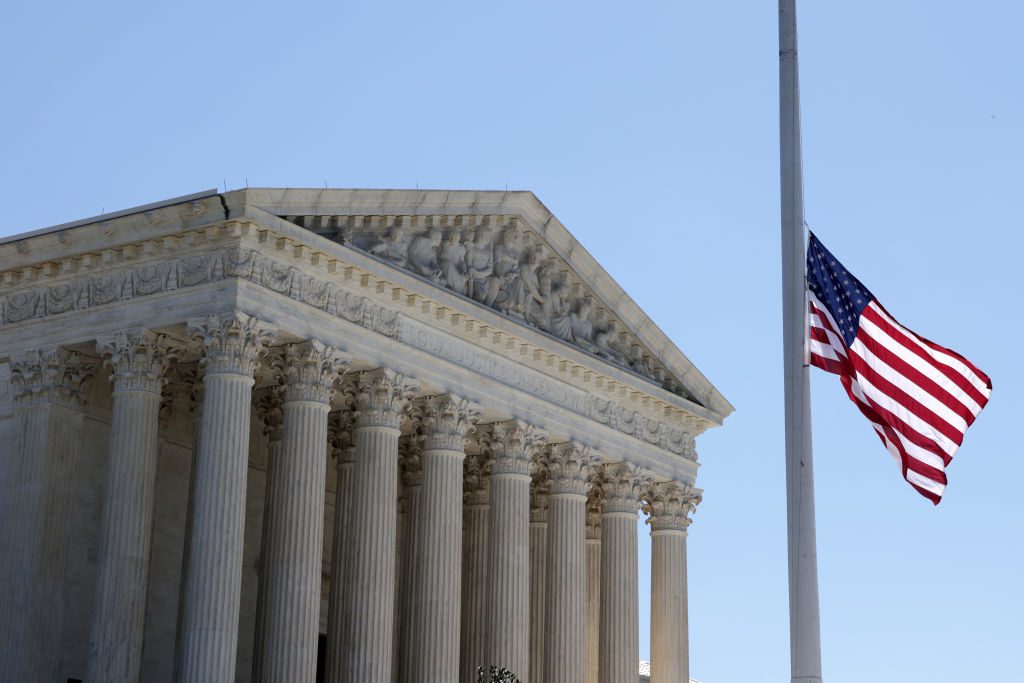 The flag is flown at half-staff

According to the U.S. Flag Code, the flag is flown at half-staff for ten days following the death of a chief justice of the Supreme Court. For associate Supreme Court justices, it should be flown at half-staff from the day of death until interment at all federal buildings, grounds, and naval vessels throughout the United States and its territories and possessions. Learn more about American flag etiquette. 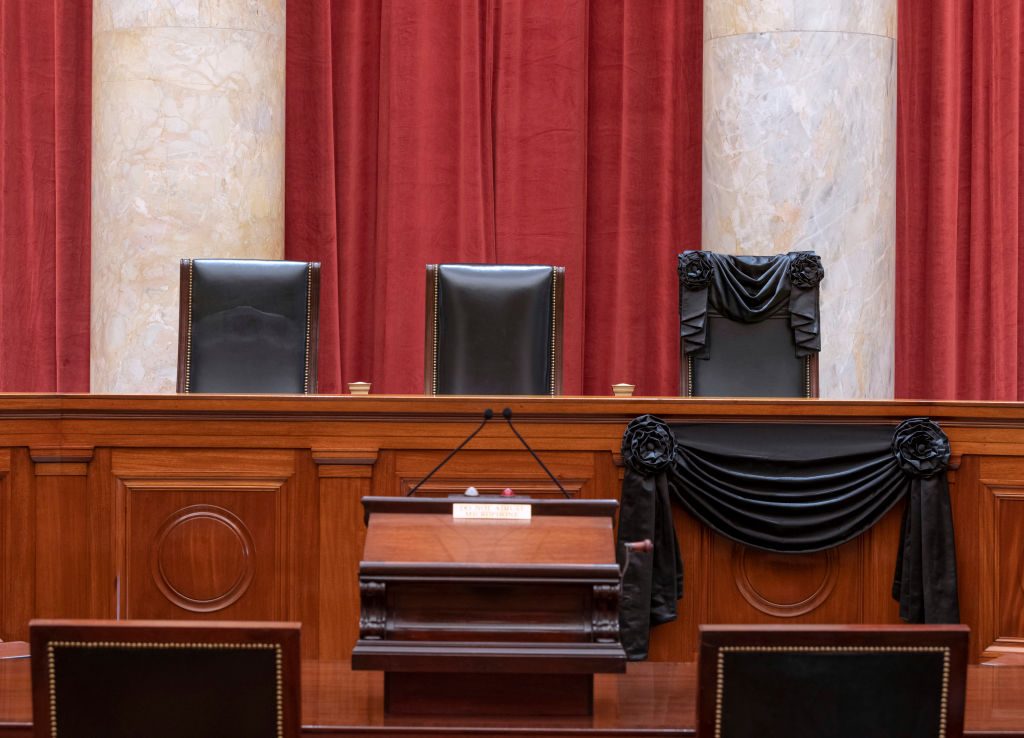 The justice’s chair is draped in black crepe

Immediately following the death of a Supreme Court justice, his or her chair at the court is draped in black wool crepe, as is the bench immediately in front of the chair. A black drape is also hung over the courtroom doors. The draping remains in place for 30 days. The tradition began in 1873 after the death of Chief Justice Salmon P. Chase. In case you were wondering, here’s why Supreme Court justices serve for life. 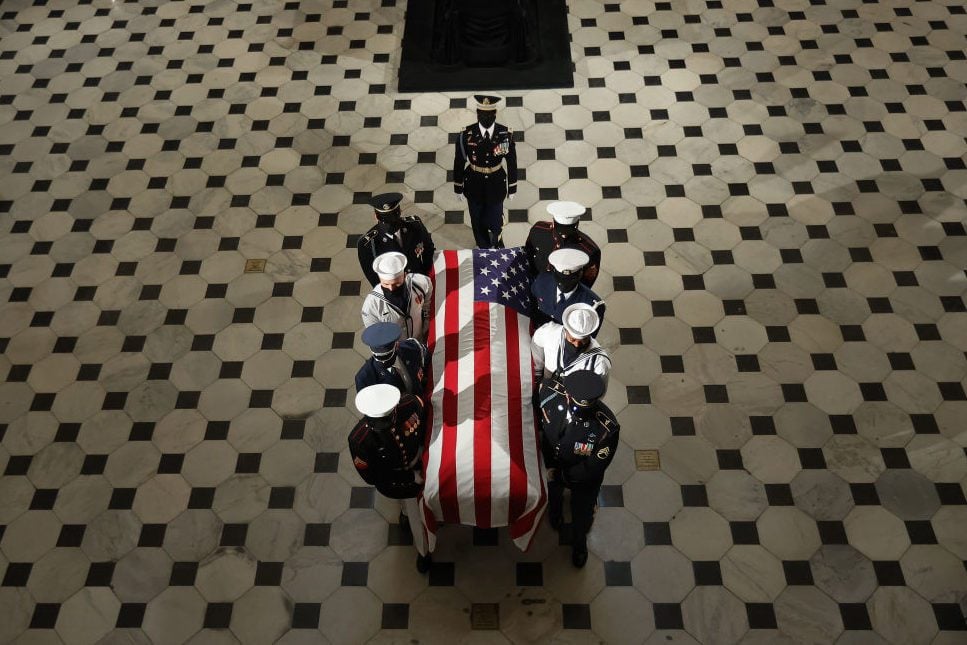 Though Justice Ginsburg’s body lay in repose outside the Supreme Court for two days and then lay in state at the Capitol for another day, such honors are rare for a SCOTUS justice. The only other justice to lie in state was William Howard Taft, who served as president before serving on the court as the chief justice. If the body is to lay in repose, family members determine who carries the casket and how long the body will remain in repose. The family also makes all funeral and burial arrangements. While Ginsburg and a dozen other justices have been buried at Arlington National Cemetery, many others have chosen smaller or more private grounds. These 9 powerful Ruth Bader Ginsburg quotes will define her legacy. 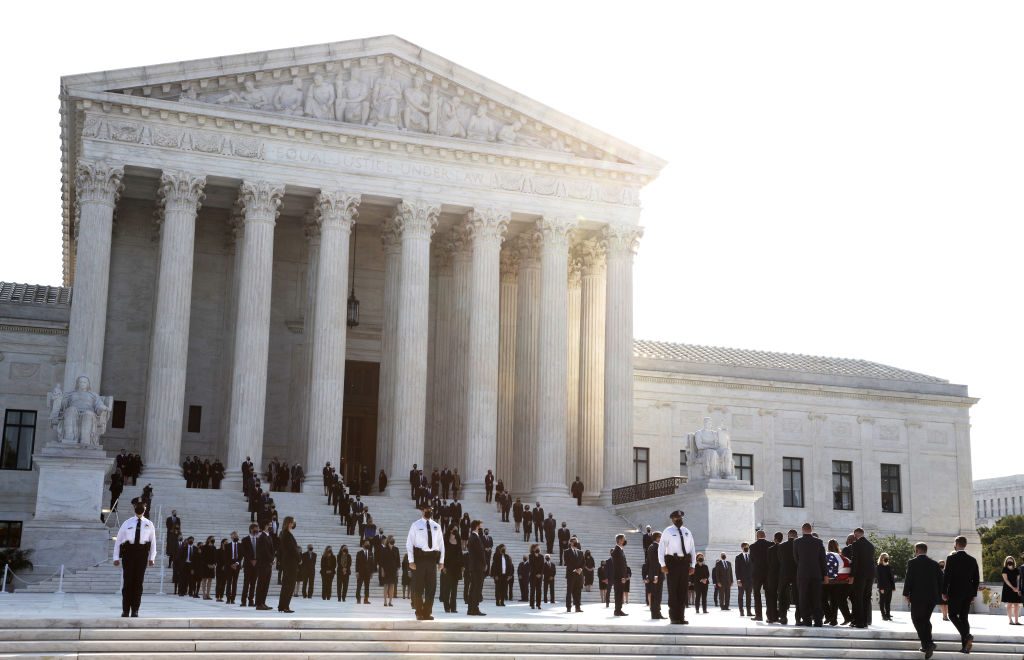 Each Supreme Court justice is permitted to have four law clerks in each term, except for the chief justice, who is allowed five. Law clerks conduct research, draft memos, and perform proofreading, fact-checking, and other administrative services to assist a justice. After a SCOTUS justice dies, his or her law clerks are typically assigned to other justices for the remainder of the court term. 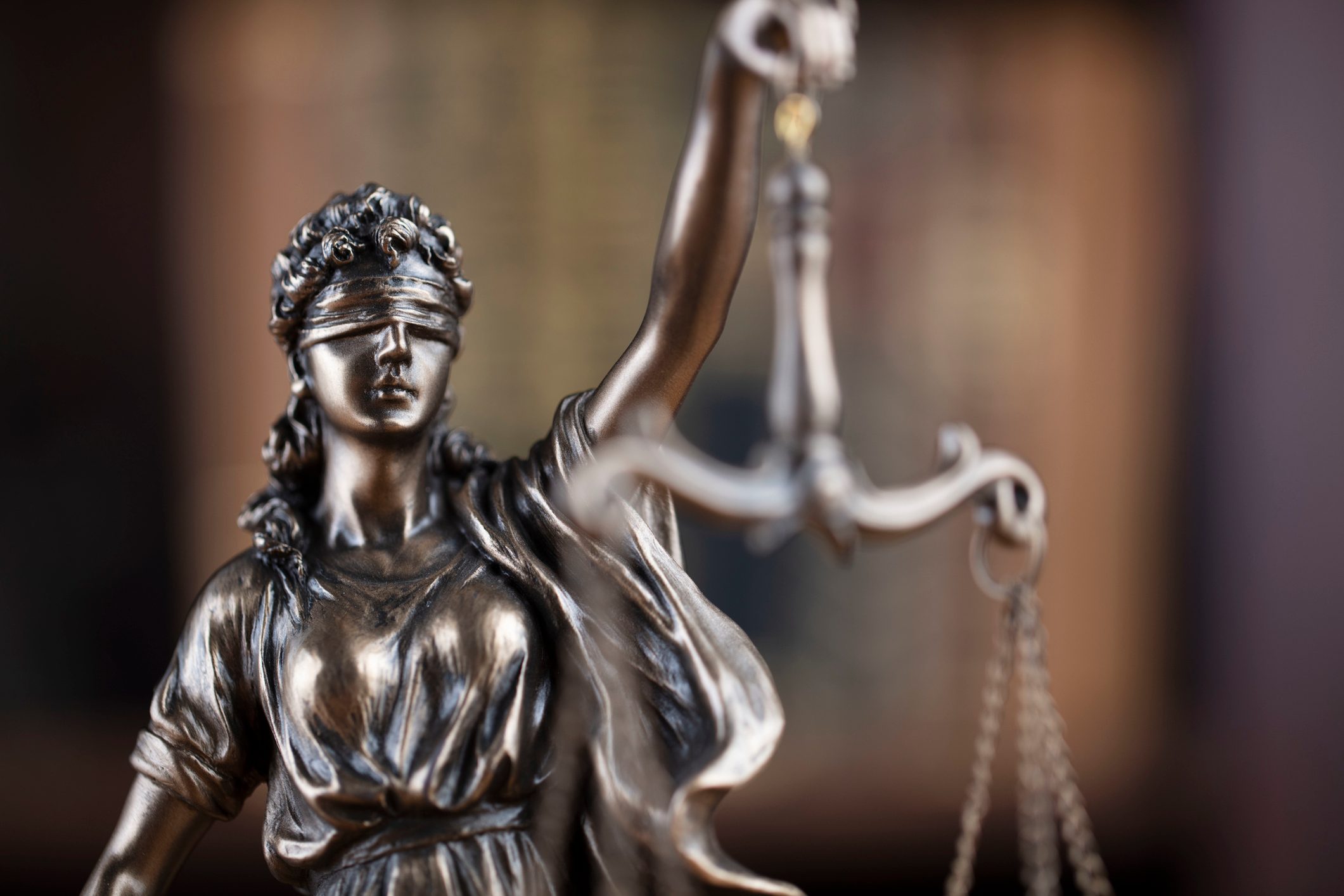 The office is vacated

The justice’s chambers typically comprise three or four rooms, including a working office, a room for files, a room for the law clerks to work, and an outer reception area. After a justice’s death, the family and staff—usually one or two secretaries, plus a messenger—begin to clear out the office, removing documents and mementos. No law regulates what happens to a justice’s official papers, so they may be donated to a library or law school, or the family can keep them in a private collection. While we wait to see what will be released from her treasure trove of files, check out these 17 rarely seen photos of Ruth Bader Ginsburg.

Often, a grace period is granted so that staff can remain on the payroll of the court while this work is completed. Once a respectful period of time has passed, the court may offer the office to other justices on the basis of seniority. If no one accepts, then the office is held for the justice’s replacement. 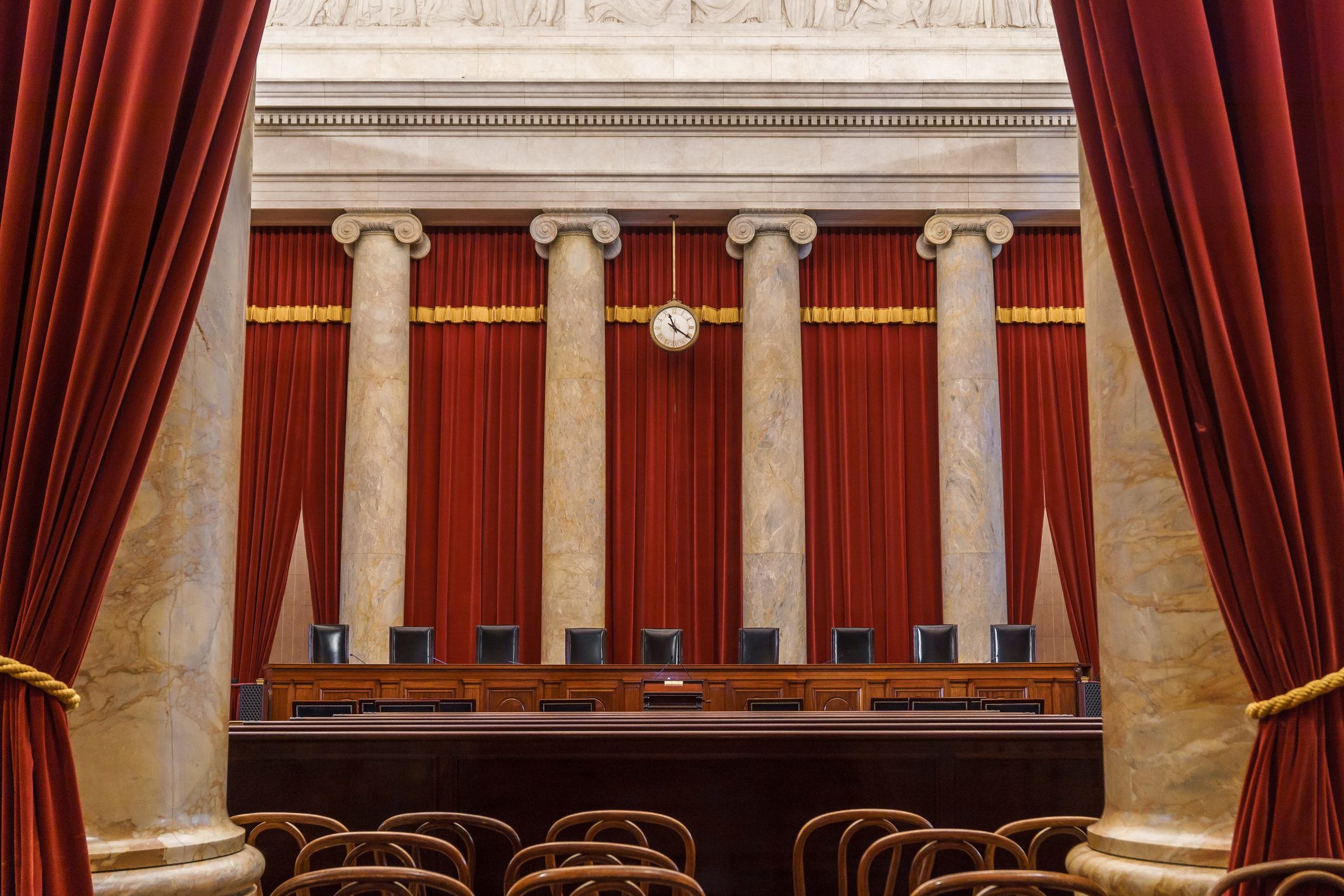 Once the black draping is removed, the remaining justices switch their seating. The most senior member (currently Chief Justice John Roberts) is seated in the center, and then he is flanked by the two most senior associate judges. The next most senior justices sit next to them, and so on, with the most junior justices sitting in the most distal chairs. Here’s why the Supreme Court has nine members.

The president nominates a replacement

When a justice on the Supreme Court dies, the sitting president “shall nominate, and by and with the Advice and Consent of the Senate, shall appoint” someone to fill that vacancy, according to Article II, Section 2 of the U.S. Constitution. The president is given unrestricted leeway in his or her selection and is not required to explain it. The Constitution does not specify that nominees meet any requirements pertaining to education, citizenship status, or age. James F. Byrnes, who served from 1941 to 1942, did not graduate from high school, though he taught himself law successfully enough to pass the bar exam at the age of 23. Once the president has decided on a nominee, he sends the information to the Senate. For more on the workings of government, learn the answers to these 19 political questions you’ve been too embarrassed to ask. 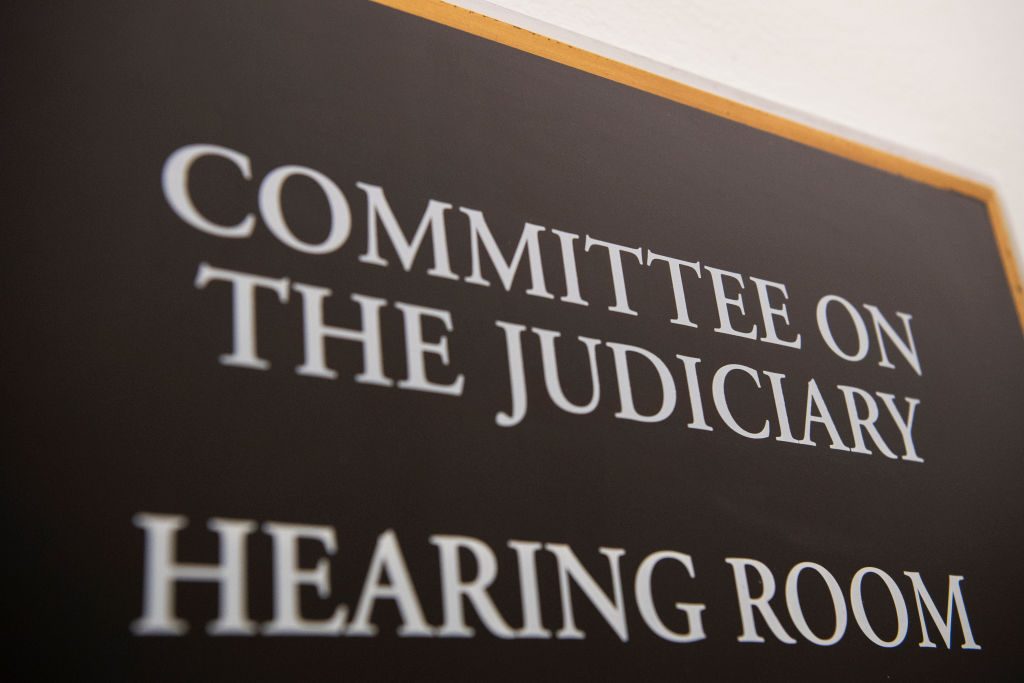 Typically, since 1955, the Senate Judiciary Committee has held hearings for nominees for Supreme Court justice as well as for Cabinet positions before referring candidates to the full Senate for confirmation. The usual first step is for the committee chair to launch a pre-hearing investigation, examining details about the nominee’s background. The process typically takes 30 to 45 days. Once any questions there have been satisfied, the 20-member committee holds public hearings. Often, the candidate is questioned about legal matters and political positions. Next, the committee sends a report to the full Senate, giving the candidate a favorable or unfavorable recommendation, or no recommendation at all.

The only nominee not to appear before the committee since 1955 was Merrick Garland, who was nominated by President Obama to fill the vacancy left after the death of Justice Antonin Scalia. At that time, Committee Chairman Chuck Grassley (R-Iowa) refused to hold hearings, and no vote was held in the Senate. Find out these 50 facts about America most Americans don’t know.

The Senate holds an up/down vote

Once the Senate Judiciary Committee sends its report to the full Senate, a date is scheduled for voting by all members. (That happens even if the committee makes a negative recommendation.) A simple majority, or a total of 51 votes from the 100 senators, is required to confirm the nominee. In the case of a tie, the vice president casts a vote. If the nominee is confirmed, the secretary of the Senate notifies the president, and the nominee can be sworn in as a Supreme Court justice, even within hours of the confirmation. Discover more things you didn’t know about the vice presidency. 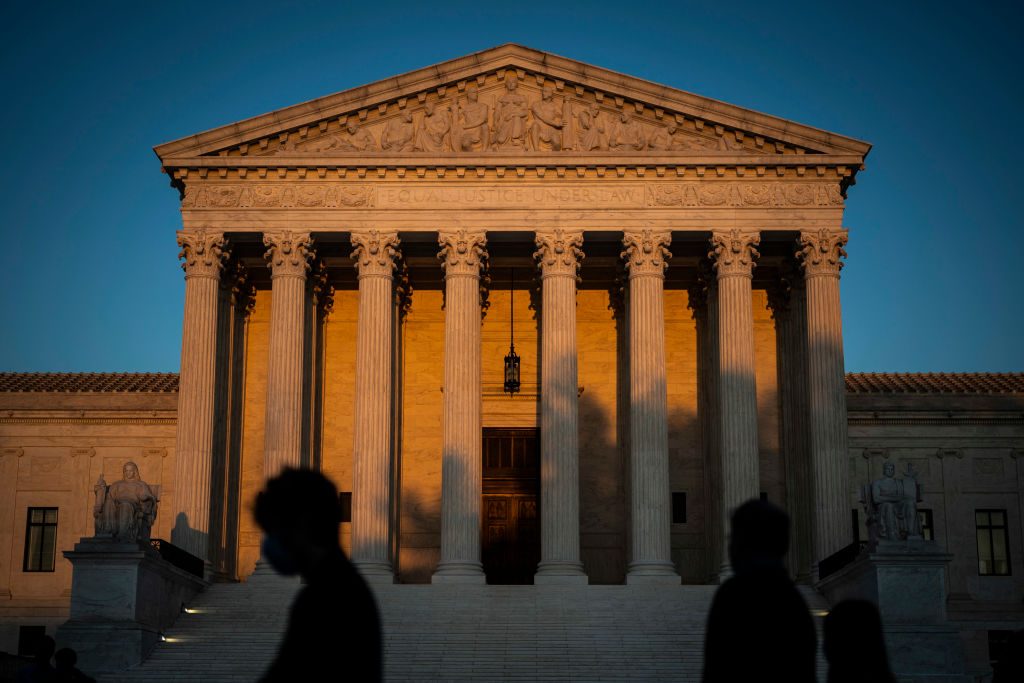 Even as the nomination process is underway, the SCOTUS will continue to hear cases, despite having eight justices instead of its usual nine. Any cases that were in progress at the time of the justice’s death must forgo his or her vote, even if it’s known how that justice would have voted. If any cases result in a deadlocked 4–4 vote, the court can pursue one of three options: It can try to rule on different grounds to secure a majority; it can let the most recent lower-court decision stand; or it can reschedule the case for the next term, when a ninth justice is seated. Next, see 12 photos from when same-sex marriage was legalized after 2015’s groundbreaking Supreme Court decision.