Flappers, jazz, and homemade hooch are just the beginning. Here's what happened in arguably one of the 20th century's most eventful years. 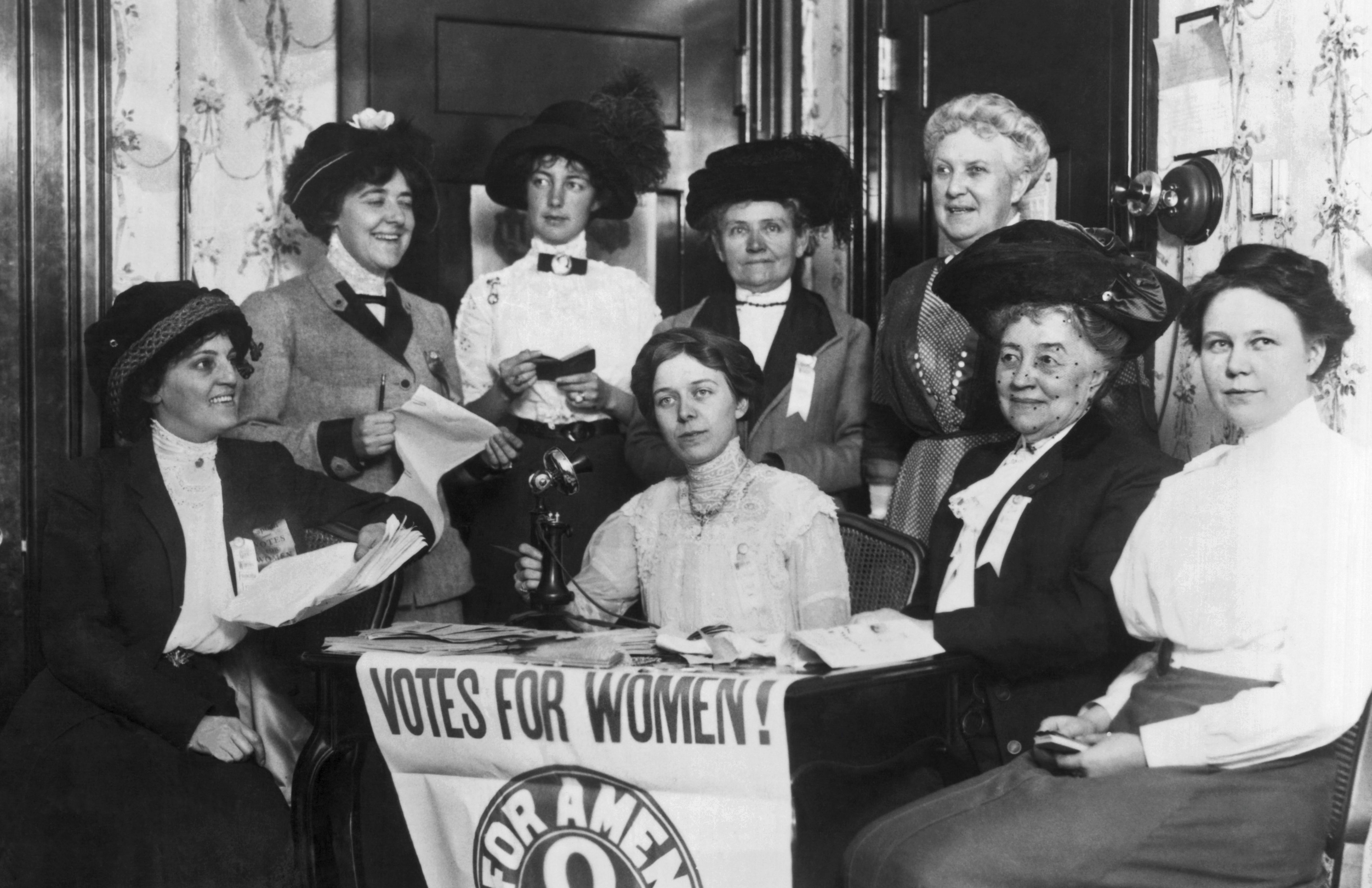 Imagine for a moment that it’s 1920. If you’re over 14, there’s a 66 percent chance you’re already married—and probably for life, since the divorce rate is 6 percent. If you’re over 54, you’ve already exceeded the U.S. life expectancy. While more Americans are moving to cities, the majority still live in the country. Movies are silent. Televisions are non-existent. The U.S. president is Woodrow Wilson, but if you’re a woman, you weren’t able to vote at the time of his election. That being said, while you may not realize it, there’s actually a woman running the country. Here’s what else was going on in America 100 years ago. And if you’re a history buff, you’ll also want to check out these 15 fascinating facts about the United States you never learned in school.

A woman was running the United States

In 1919, President Woodrow Wilson suffered a debilitating stroke—but the government felt it was in the country’s best interest to keep things quiet. The public didn’t learn about the stroke for months, during which time his wife, Edith Wilson, was making most executive decisions. Historians now say that Mrs. Wilson was effectively the U.S. President during the remainder of Wilson’s term, which means that a woman was running the country throughout 1920.

A mom convinced her son to let women vote

The 19th Amendment to the U.S. Constitution, which granted some women the right to vote, had been kicked around in Congress for years. But it was finally ratified on August 18, 1920, when Tennessee signed on, becoming the 36th state to do so (as was required to ratify a Constitutional amendment). What you probably don’t know is that Tennessee’s deciding vote was cast by 24-year-old Harry T. Burn, who was following his mom’s advice “to be a good boy” and whose vote was the 50th out of a possible 99. Now that’s what we call a close call! You might also be surprised to learn that these 15 countries gave women the right to vote before the United States did.

The country elected the wrong president for the right reasons

The first presidential election in which women had the right to vote was that of 1920, in the race between Republican Warren G. Harding and Democrat James M. Cox. Harding was elected by a landslide, and some say that was due in large part to his staunch pro-woman stance. Sadly, Harding’s presidency has been roundly criticized, and he died suddenly on August 23, 1923, before he had a chance to complete his first term. Ironically, there are some who believe Harding was murdered…by his wife.

It became illegal to sell booze…but not to drink it

The 18th amendment to the Constitution, which banned the sale of “intoxicating liquors,” went into effect on January 16, 1920. While Prohibition, as it was known, closed down every tavern, bar, and saloon in the United States and took liquor off the shelves of every store, it didn’t stop Americans from drinking. That’s because the Amendment didn’t make it illegal to drink alcohol. As a result, the liquor trade was driven underground, where it was controlled by criminals like Al Capone until 1933, when the amendment was repealed. Believe it or not, these 50 things are still banned in the U.S.

America said no to the Treaty of Versailles

It is widely known that World War I unofficially ended in 1918 with Germany’s surrender. It is also widely known that the war formally ended in 1919 with the signing of the Treaty of Versailles, which some believe laid the groundwork for World War II with its harsh reparations against Germany. What you might not know is that the United States refused to sign it. Whether that absolves the U.S. of or implicates the U.S. in the complicated chain of events that led from the Treaty to World War II remains the subject of debate. Did you know that these cool everyday things were actually designed for World War I?

The League of Nations was founded…without the United States

The precursor to the United Nations, the League of Nations was founded in January 1920 in order to mediate international disputes before they rose to the level of another world war. While President Wilson had been instrumental in creating the League, the United States never actually joined it. In fact, nine days after its establishment, the U.S. Senate officially voted against joining.

The ACLU was founded

On January 2, 1920, federal agents broke into the homes of suspected anarchists without search warrants and rounded up thousands of citizens suspected of being “dangerous” to “American security.” Most were deprived of due process. Many were deported. Although it wasn’t the first such raid (known as “Palmer Raids,” after Attorney General A. Mitchell Palmer, who was instrumental in making them happen), it was the one that led to the founding of the American Civil Liberties Union (ACLU). Here are some historical facts you’ll wish weren’t true.

On September 16, 1920, a bomb exploded in front of the Wall Street offices of J.P. Morgan & Co., killing 38 and injuring hundreds. Those responsible for the bombing were never identified with any certainty, nor was a motive. Some believed the bombing was an attempt to assassinate J.P. Morgan, himself. Some believed it was an attempt to punish the company for having profited from World War I. Most of the finger-pointing, however, was focused on the same sort of people targeted by the Palmer Raids.

The “Sacco and Vanzetti” murders

On April 15, 1920, a paymaster for a shoe company in South Braintree, Massachusetts, was shot and killed along with his guard, and whoever did it absconded with $15,000 (which would be worth considerably more today). Two Italian immigrants, Nicola Sacco and Bartolomeo Vanzetti, were convicted and sentenced to death based on circumstantial evidence. It’s not clear to this day whether they actually committed the crime, although in 1977, Massachusetts Governor Michael Dukakis issued a proclamation vindicating them. Check out these famous moments in history that never actually happened.

The Olympic flag made its debut

At the 1920 Summer Olympics in Antwerp, Belgium, the Olympic flag as we know it today—with its five interlocking rings—debuted. The rings were meant to represent unity after World War I. In addition, doves were released to symbolize world peace. Here are 13 Olympic moments that changed history.

On August 12, 1920, Charles Ponzi was arrested by federal authorities for having orchestrated what became known as the very first “Ponzi scheme.” Ponzi’s scheme, which involved postal stamp arbitrage, promised investors a 50 percent return in 45 days and 100 percent in 90 days. But instead of using his investors’ money to engage in arbitrage, he used it to pay off previous investors and skimmed off the rest for himself. Ponzi’s scheme lasted less than two years, and he spent 14 years in prison. Check out more of the biggest lies that made history. 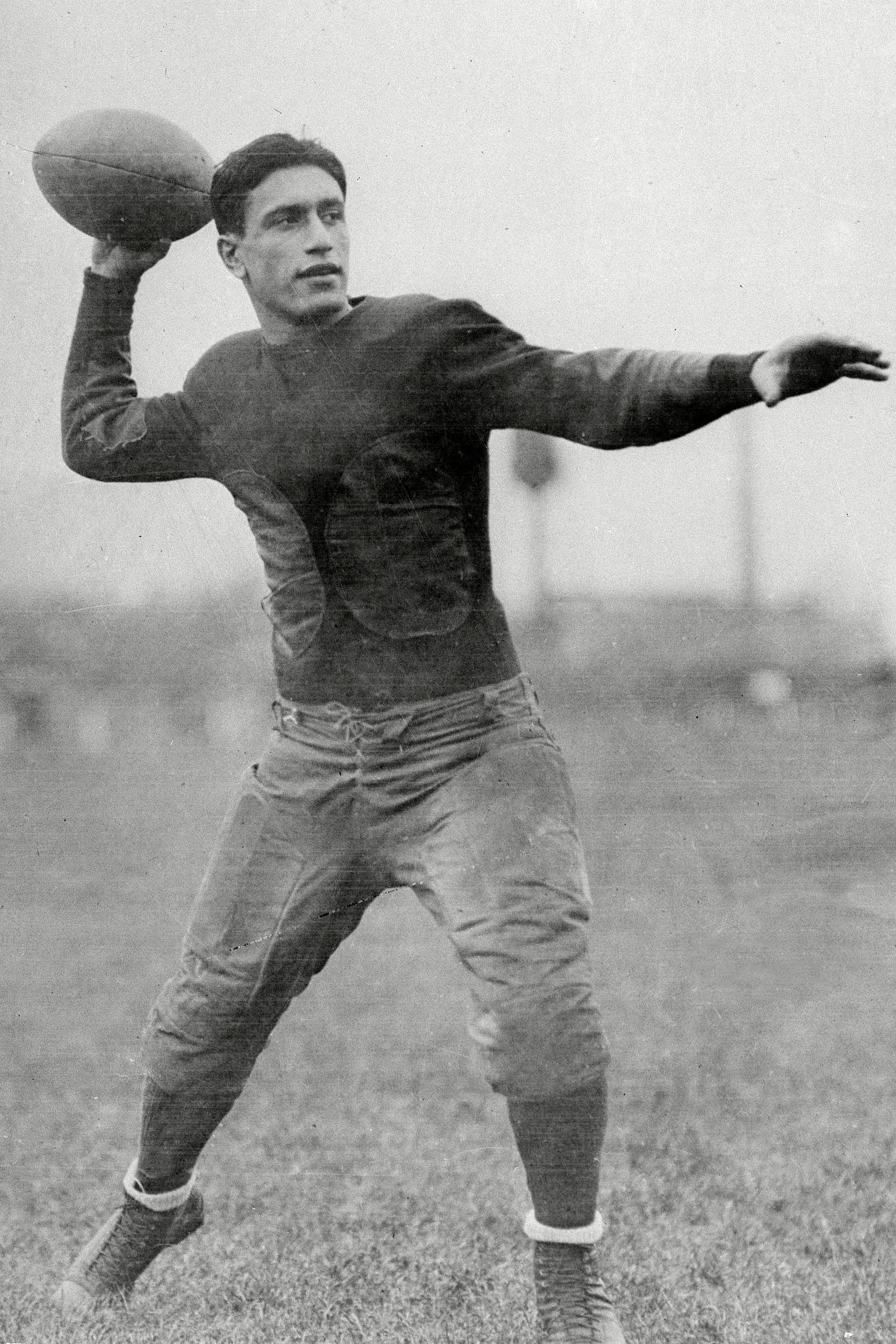 American pro football was born in August 1920 with the formation of the American Professional Football Association, which would later become the National Football League (NFL). The American sport of football had evolved as a variation on rugby but with a little bit of soccer’s influence thrown in, beginning in the 1880s. By the 1910s, the new game was proving to be a viable spectator sport. Ever wonder why Americans say soccer instead of football? We’ve got the answer! 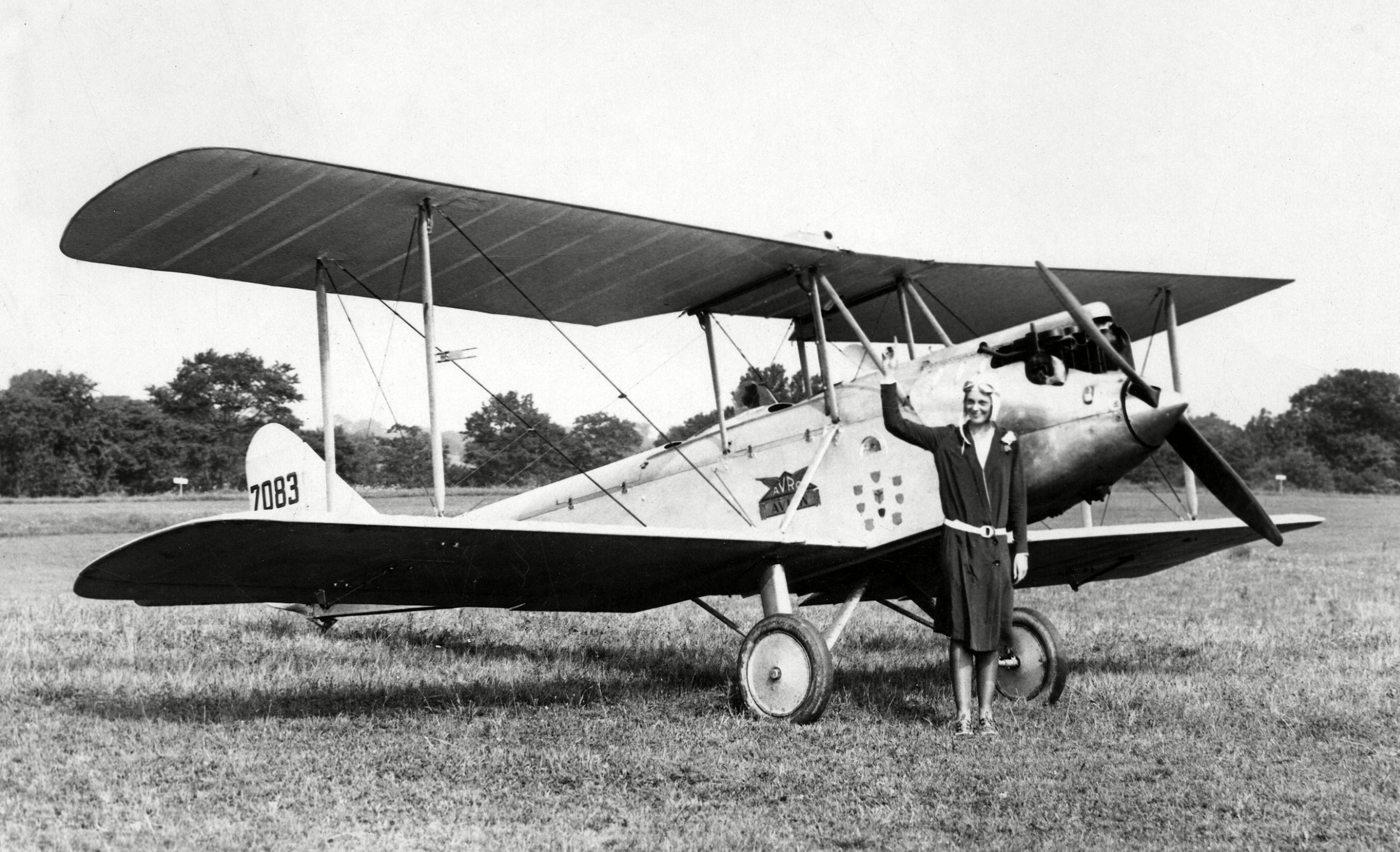 Born in 1897, Amelia Earhart took her first airplane ride (as a passenger) in 1920 with famed World War I pilot Frank Hawks. That was all it took: “As soon as we left the ground, I knew that I myself had to fly,” she’s quoted as having said. She enrolled in flying lessons, and by 1921, she was already flying solo. Don’t miss these other Amelia Earhart facts you never knew.

Agatha Christie’s first novel came out in 1920. The Mysterious Affair at Styles focused on the murder of a rich heiress and introduced the world to Detective Hercule Poirot, one of Christie’s most famous characters. Another interesting Agatha Christie fact: She once disappeared for a short period of time with no explanation at all. Here are 15 other mysterious disappearances that will probably never be solved.

Author Isaac Asimov was born January 2, 1920, in Petrovichi, Russia. After immigrating with his family to the United States, he became a science professor while pursuing a career in writing. Asimov became famous for his science fiction, which includes the I, Robot series. When you’re creating your reading list for the new year, you might want to add these high school English class books you should read again as an adult.

Author Ray Bradbury was also born in 1920 (August 22). Known to many as a prolific science fiction writer, he is perhaps best known for his futuristic novel Fahrenheit 451. But he is also well known for his collections of short stories, such as The Martian Chronicles, many of which can be characterized as science fiction. However, Bradbury, himself, rejected the categorization, and many who recall his completely non-science-fictiony novels, Dandelion Wine and Something Wicked This Way Comes, will understand where Bradbury was coming from. Here are another 100 books everyone should read before they die.

Born in 1899, Al Capone, also known as Scarface, was one of Chicago’s most notorious gangsters. But he didn’t start out in Chicago—or on the wrong side of the law. In fact, in 1920, he was earning an honest living as a bookkeeper for a construction company in Baltimore. But that same year, his father died of a heart attack, and Capone’s friend Johnny Torrio, a racketeer who had moved from Brooklyn to Chicago, invited Capone to come stay with him, according to History.com. And the rest is history. These 30 slang words from the 1920s are worth bringing back. 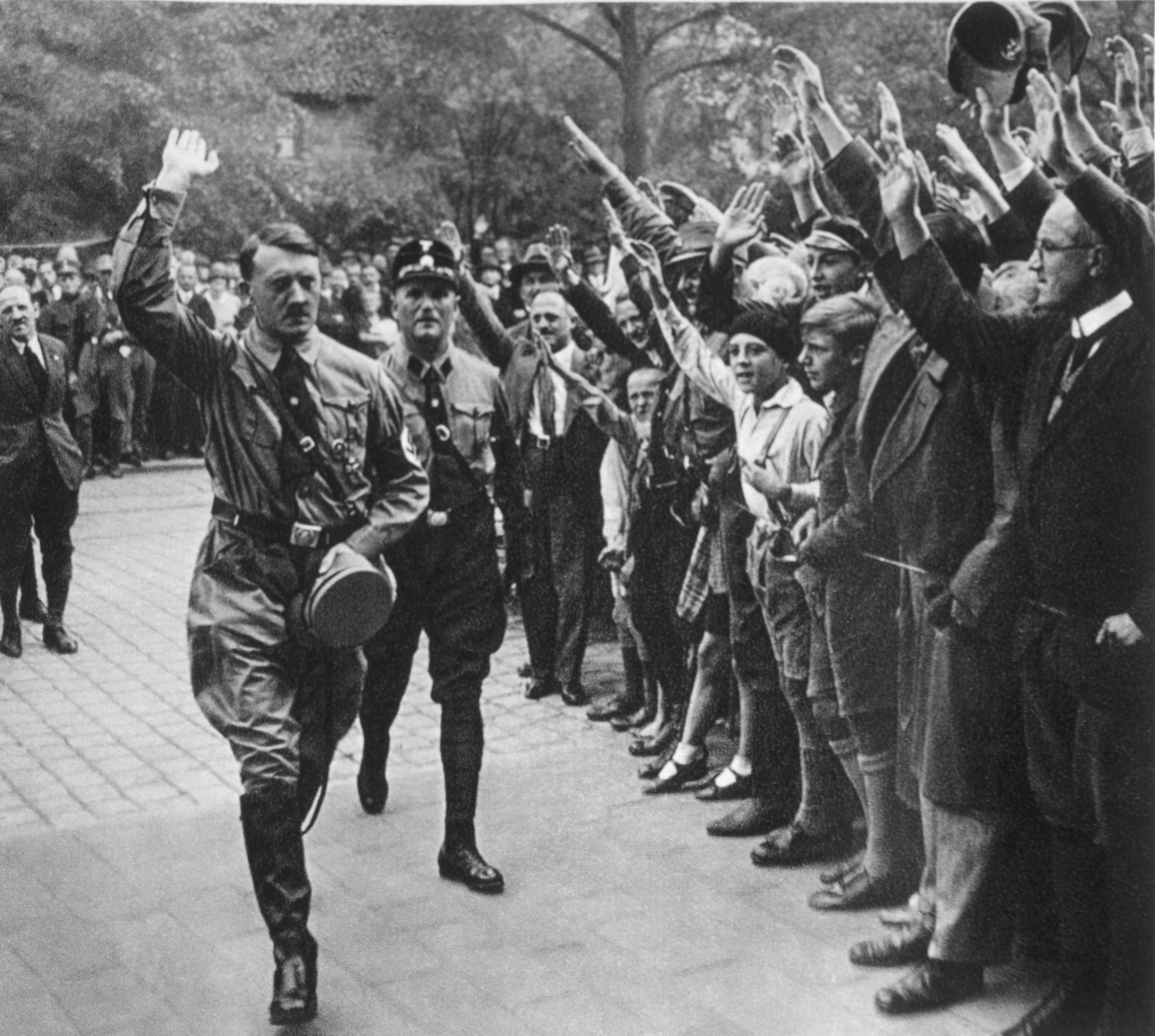 “On February 24, 1920, Adolf Hitler delivered the Nazi Party Platform to a large crowd in Munich, an event that is often regarded as the foundation of Naziism,” according to Time. In fact, it was in 1920 that the Nazi party got its name (it had previously been called the German Workers’ Party). Can you tackle these tricky U.S. war history questions that most people don’t get right?

Yes, you read that right. “When the Post Office’s Parcel Post officially began on January 1, 1913, the new service suddenly allowed millions of Americans great access to all kinds of goods and services. But almost immediately, it had some unintended consequences, as some parents tried to send their children through the mail,” according to Smithsonian.com. Apparently the postage was cheaper than a train ticket. But that all ended in June 1920, when the Post Office noted that children “clearly do not come within the classification” of “animals” eligible for transport.

In 1920, the first commercial radio station in the United States (Pittsburgh’s KDKA) hit the airwaves. It was a major change in the way Americans received their news and spent their evenings. By the end of the 1920s, there were radios in 12 million households. By the way, here’s why radio stations always start with a “K” or a “W.”