While we eagerly await the reopening of Walt Disney World, here are some things to keep in mind for when the parks drop their ropes and let guests back in to experience the Happiest Place on Earth again. 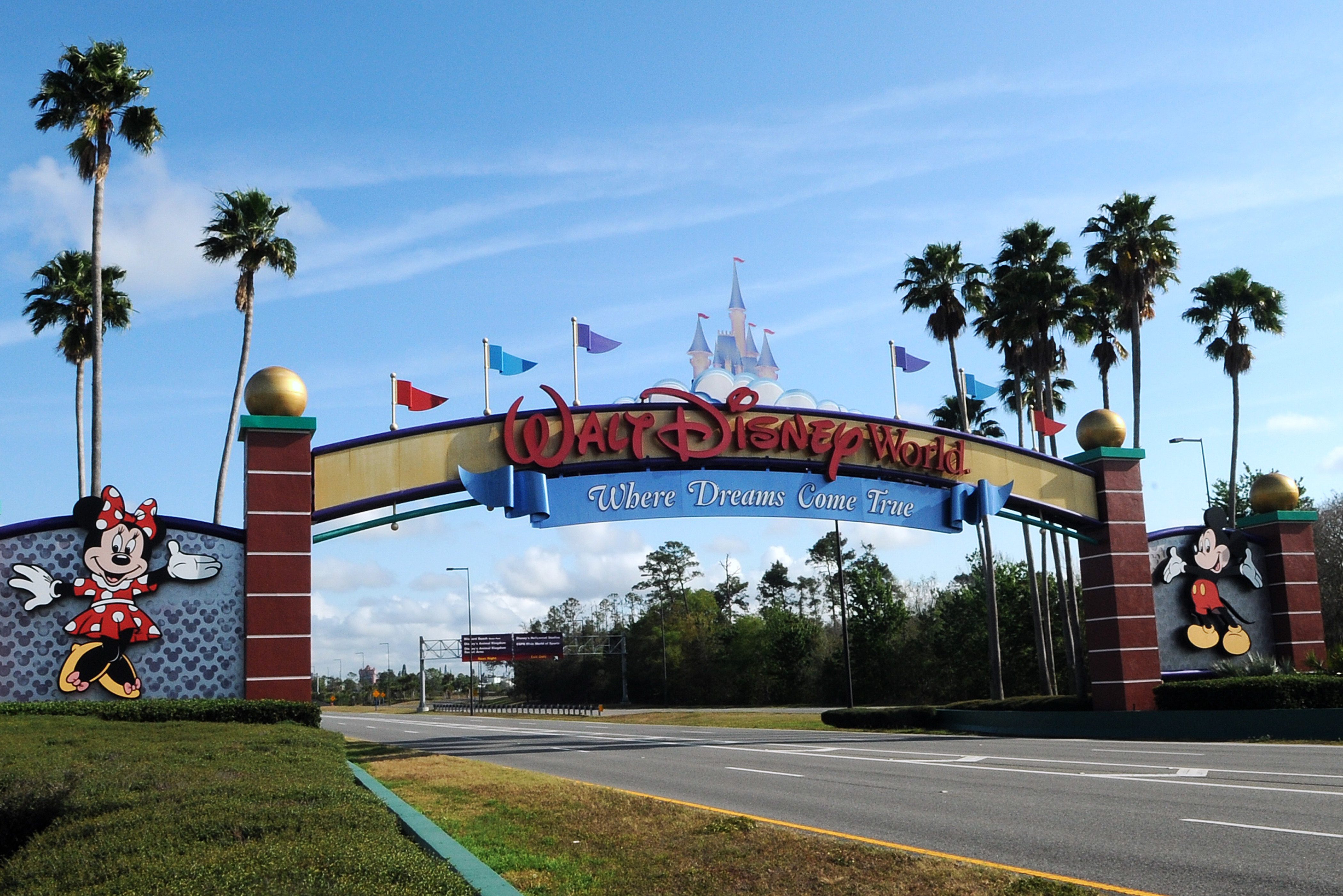 Disney parks in the United States have been closed due to COVID-19 safety precautions since mid-March, save for Disney Springs, part of Walt Disney World in Orlando, Florida, will began a phased reopening on May 20. Disney World recently announced that the Magic Kingdom and Animal Kingdom are scheduled to reopen on July 11. Much of the protocol which the was presented to the Orange County Task Force for approval on May 27, will follow Shanghai Disneyland, which closed January 25 and reopened on May 11 after Shanghai successfully flattened the curve on COVID-19 cases. Based on these preliminary operational updates, we can start to see an outline of what will be changing at Disney when it finally reopens. Here’s what you might see when you visit Walt Disney World next time. In the meantime, find out all the things that are still happening at Disney World even though it’s currently closed. 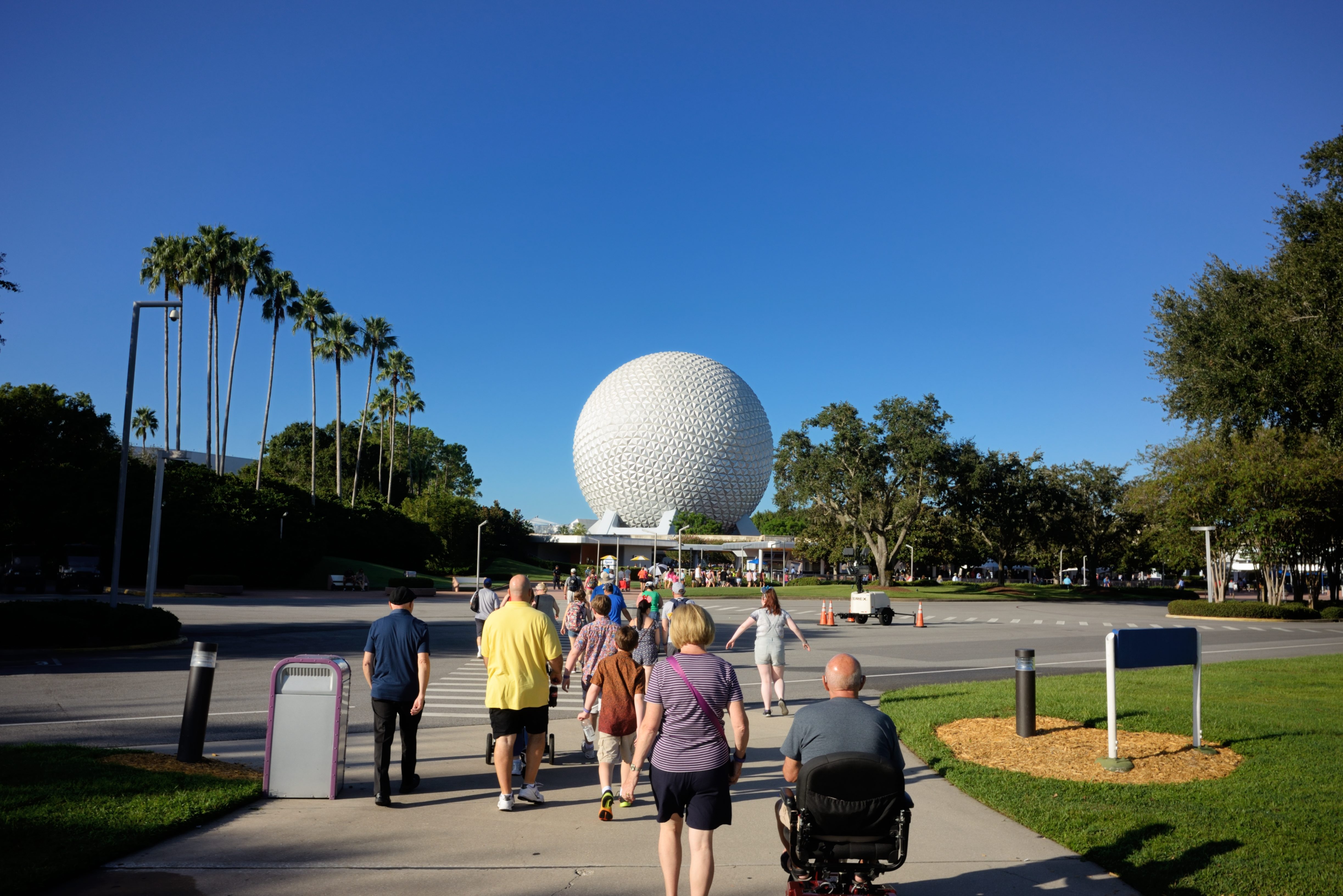 The phased reopening of parks and attractions

Picture the eventual reopening of Walt Disney World Resort more like the sleepily turning Carousel of Progress in EPCOT and less like the quick spiraling thrills of Space Mountain: In other words, don’t expect everything at Walt Disney World Resort to speedily open at once. Instead, you’ll see the resort come back online in phases: first Disney Springs (even now, it’s just third-party operated dining spots that are getting the green light), then Disney Vacation Club hotels will open to members and Disney’s Fort Wilderness Resort & Campground will begin to reopen on June 22, and then the theme parks; after Magic Kingdom and Animal Kingdom parks open, EPCOT and Disney’s Hollywood Studios will follow four days later on July 15. And even when the Magic Kingdom has its first rope drop, not every attraction initially will be up and running, for example, in Shanghai the outdoor play areas were closed and there were no indoor theater shows. Until the parks reopen, you can even try riding 20 of Disney World’s best rides virtually. 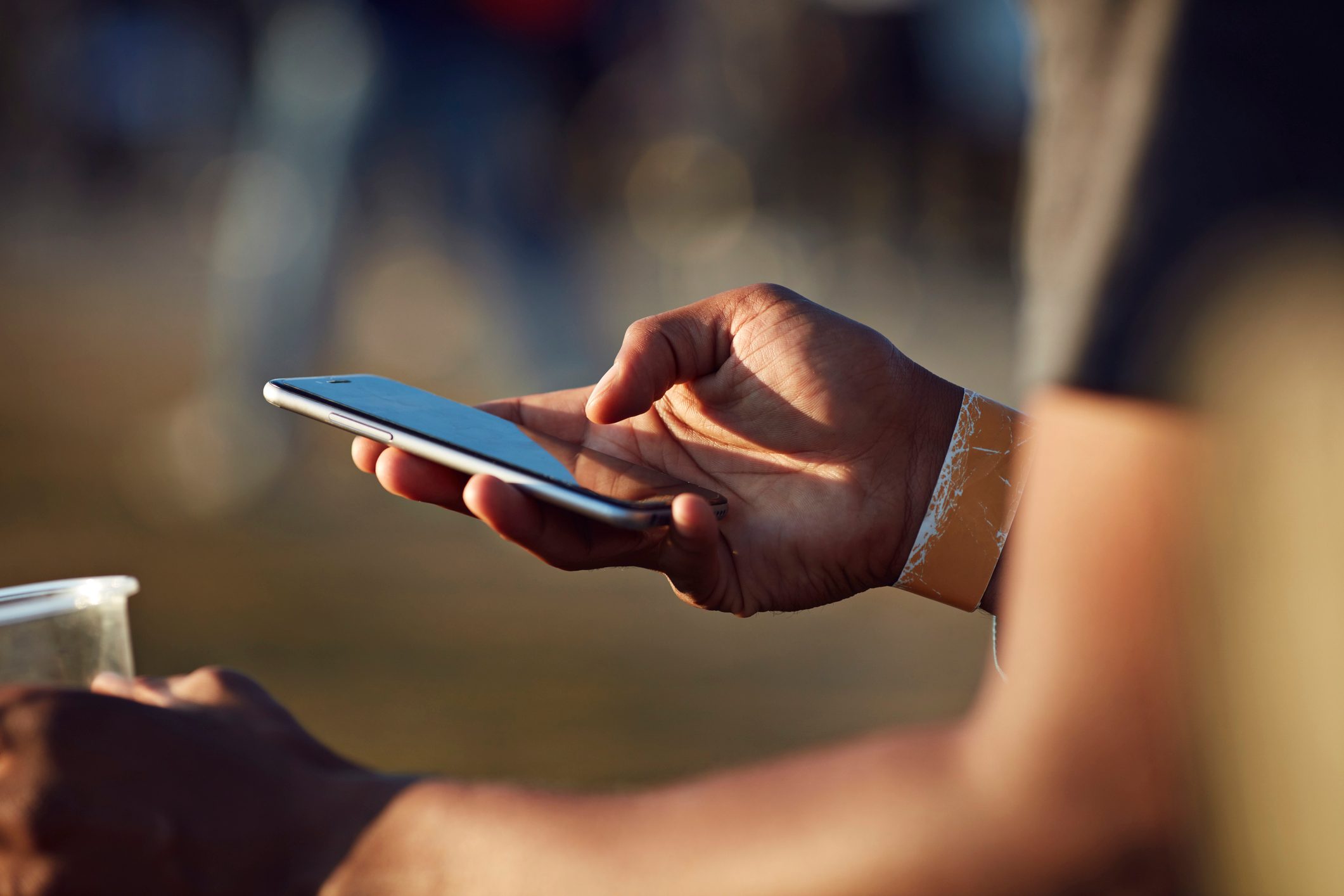 You may want to order an extra phone charger now: Anyone who wishes to go to the parks will need to make a timed reservation (at least in early reopening days) and receive a timed QR code for entrance. This helps to control crowds; Shanghai Disneyland opened at less than 30 percent capacity and The Motley Fool is reporting that Orlando theme parks will most likely open with 50 percent capacity. Also likely on the horizon: Virtual lines and timed entrances for most rides, much like the parks were already using for the new Star Wars: Rise of the Resistance. When Disney parks reopen in the United States, it “will likely include implementation of guest capacity measures to comply with state and federal guidelines. We’re also exploring ways to use technology to aid us in these efforts, like with our Play Disney Parks App and through virtual queues at Disneyland and Walt Disney World,” says Disney’s chief medical advisor, Pamela Hymel, MD. Check out how these Disney devotees are recreating their favorite rides at home! 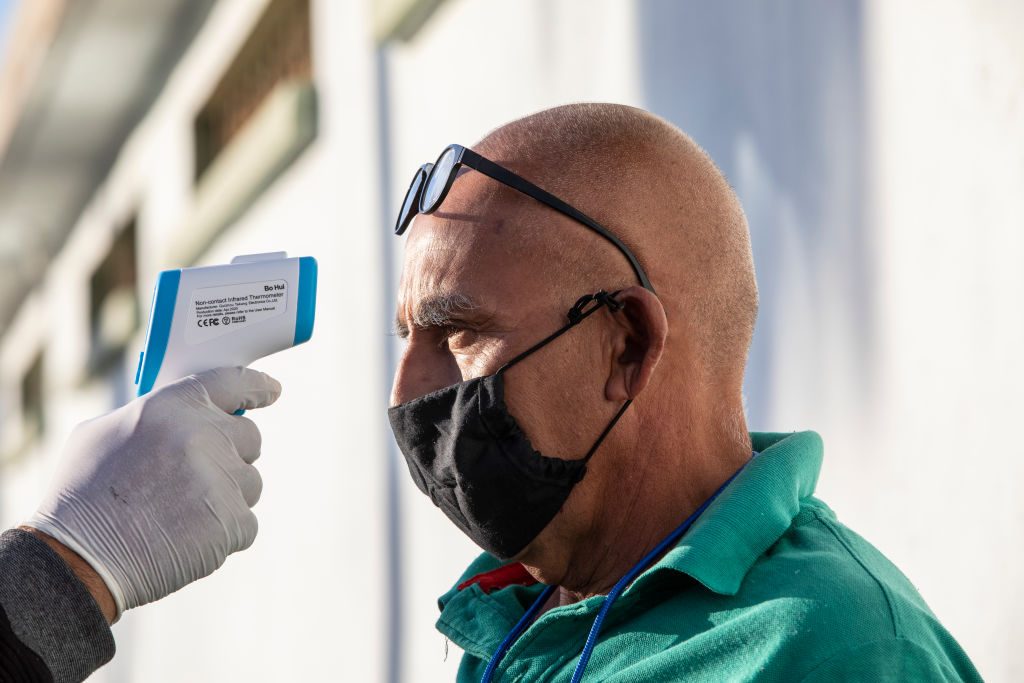 Visitors will have their temperature checked before entering the park as they walk through a security screening area with heat sensors that scans numerous guests at once. Disney isn’t the only place that will be taking your temperature; you may have it taken at the airport, too. 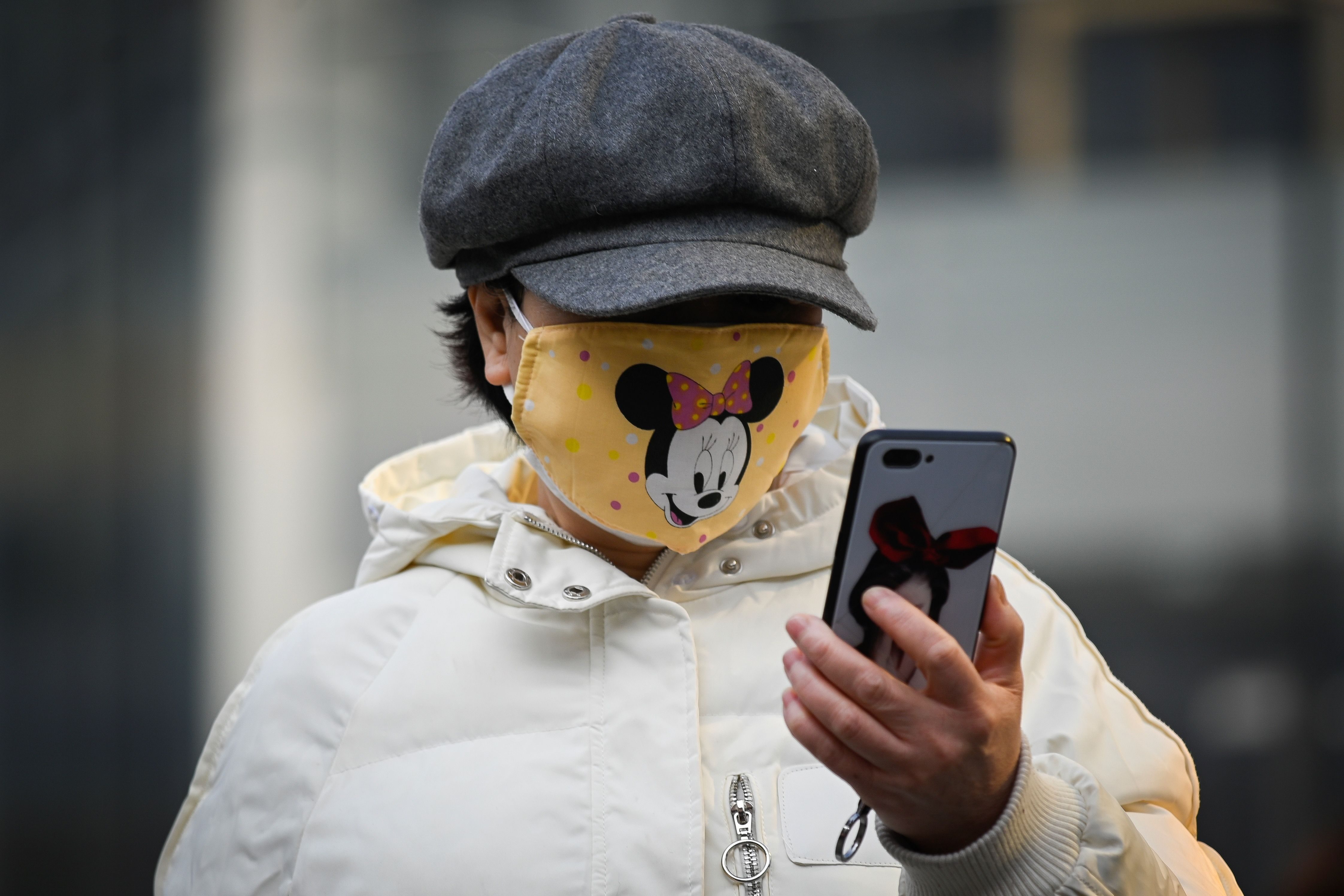 You may have noticed that Disney is selling adorable personal face masks on its e-commerce site. Face masks will be required at all times for both guests (except for when they’re eating) and for cast members (staff), which is not surprising given that the latest U.S. Centers for Disease Control and Prevention (CDC) recommendation encourages everyone to wear masks in public. We love these photos that show face masks are the new normal. 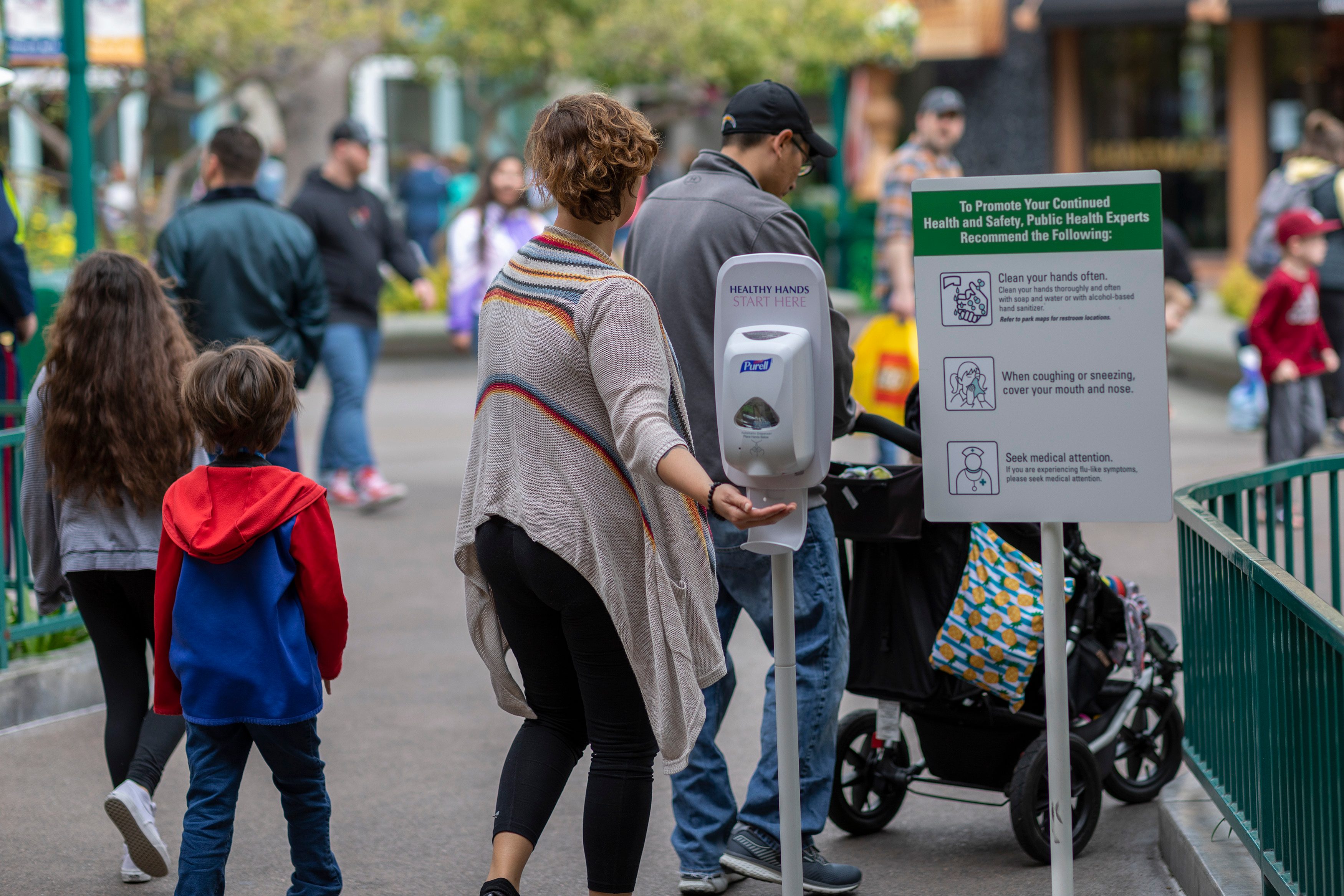 “We will have cast members, throughout the park, doing continuous wiping down, sanitizing, and disinfecting all the high-touch surfaces,” Andrew Bolstein, the senior vice president of operations for the Shanghai Disneyland park, said. Likewise, you’ll be seeing hand washing stations and hand sanitizer throughout Disney World, and at the entrance and exits to every ride and attraction. It’s time to know the difference between sanitizing and disinfecting. 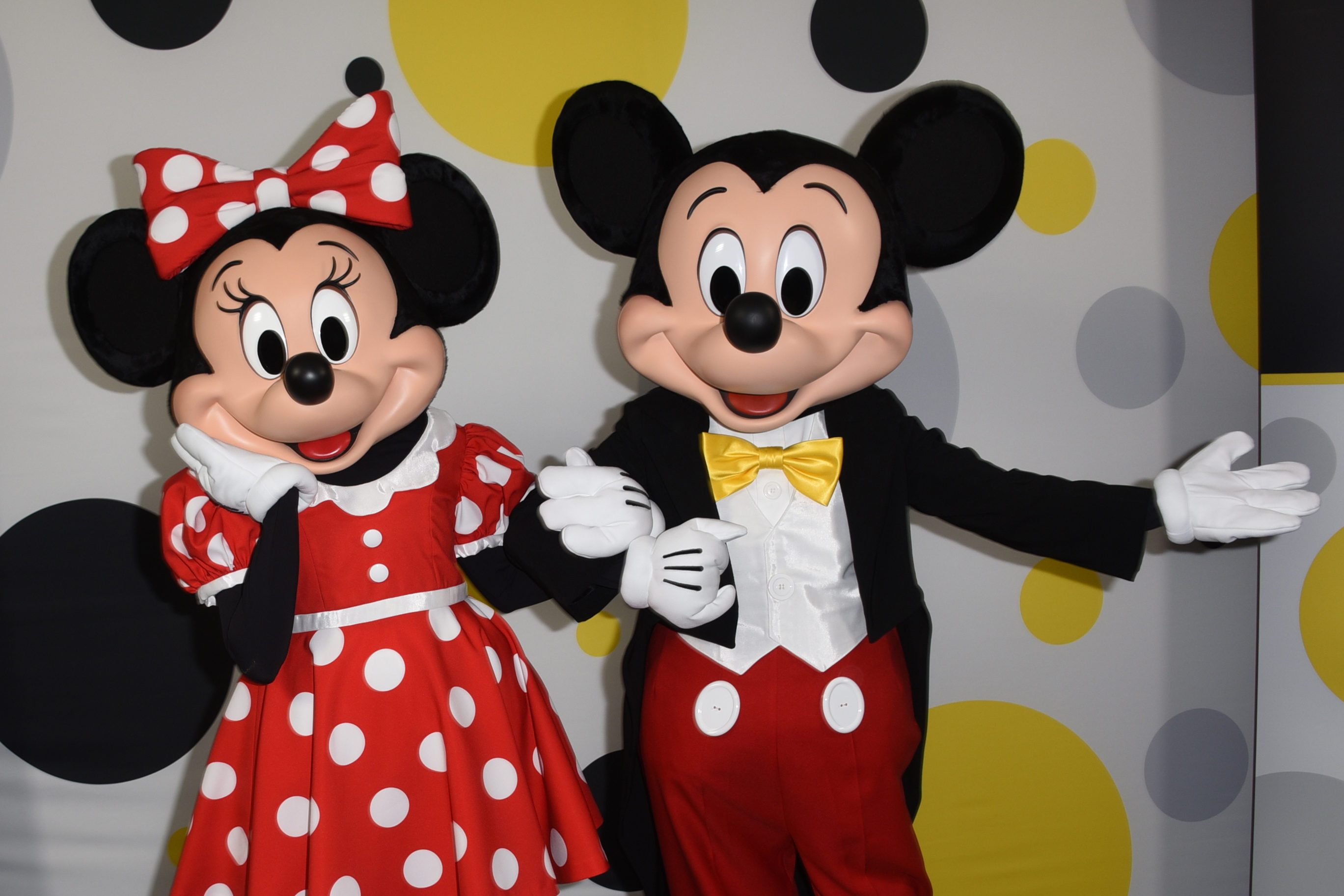 In Shanghai, Mickey Mouse and his pals could be seen waving to guests, but at a distance in parades. Currently, there is no hugging, autographs, or any other one-on-one contacts with costumed characters. We do hope that changes as time goes by, but in the meantime, you can still take lots of pictures and get “the emotional connection,” says Bolstein. As for Orlando, “We will temporarily suspend parades, fireworks, and other events that create crowds,” Jim MacPhee, senior vice president of operations at Walt Disney World told the Orange County task force. Find out 15 surprising facts about Disney’s most famous characters. 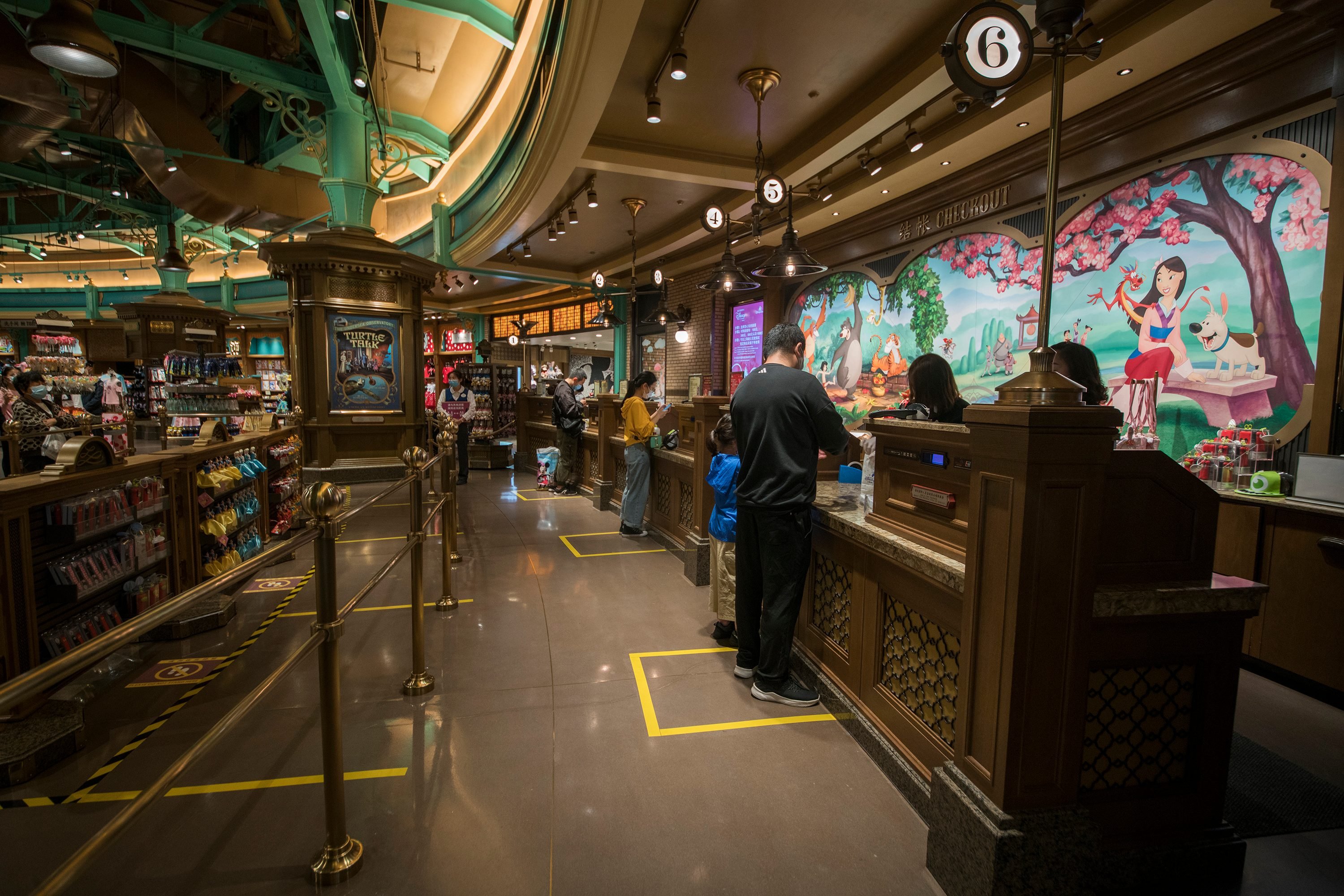 This may actually be good news: No more crowded holding areas for rides or standing close to non-family members for a show. Instead, expect well-marked indicators of where to stand in line and sit at a restaurant so you maintain optimal social distancing. At Shanghai, on the rides “we have put markers on all the rows, all the benches, to indicate where your seat is,” said Bolstein. “And if they don’t have markers, that’s not a place to sit. So, it’s greatly reducing the capacity of the ride, but allowing for social distancing which is most important at this stage” he added. You’ll notice in this video from Disneyland Shanghai that markers are actually placed everywhere guests would walk in a queue for security, placed 6 feet apart. Find out 10 things you won’t be seeing at hotels anymore. 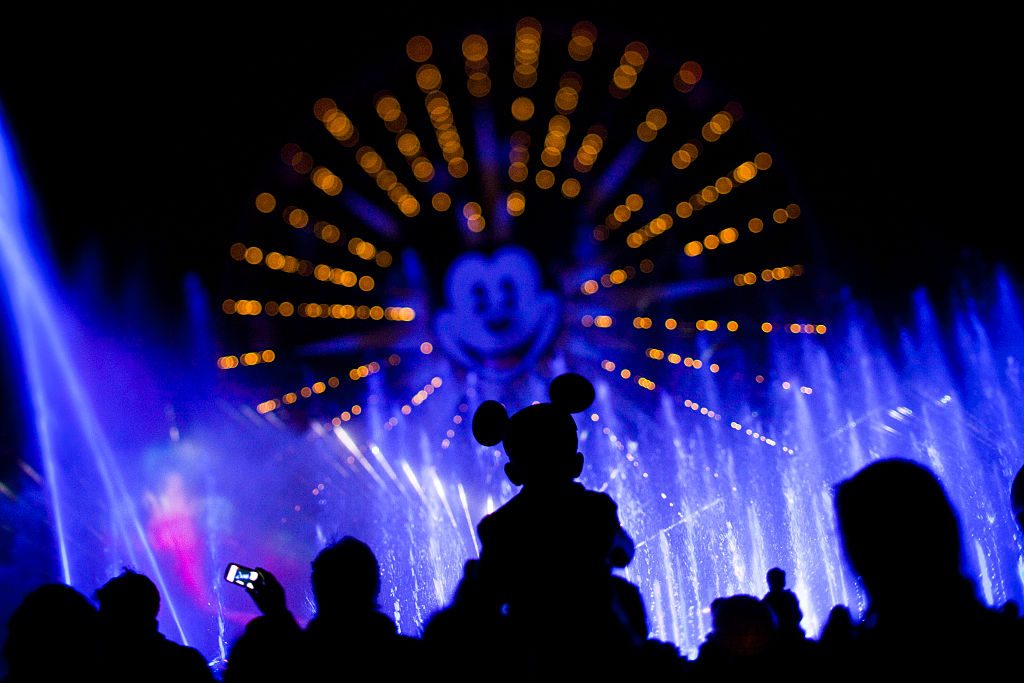 If you’ve been to Disney World in the last few years, you may already have experience using Magic Bands to pay for meals and souvenirs without having to reach into your pocket. In Shanghai, to enter the park guests need to present ID that matches their reservation QR code, but what they don’t have to do: Scan their fingerprint. We’re guessing “no-touch” admission will also be in place at Walt Disney World. According to Orlando Weekly, Disney will likely phase out fingerprint scanners, replacing them with touch-free facial recognition systems. Find out why Disney World scanned guests’ fingerprints in the first place. 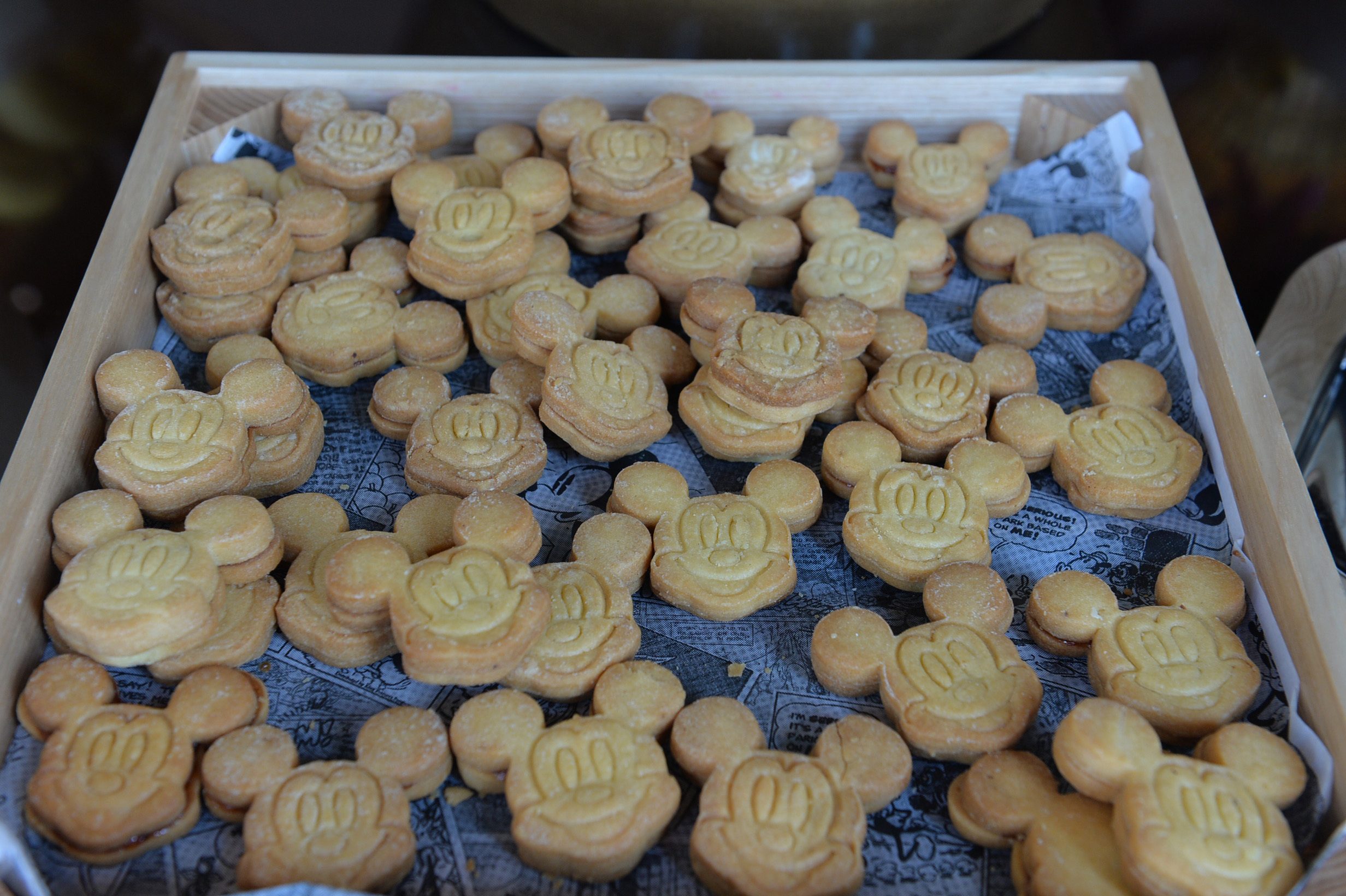 No buffets and more online ordering

The good news: Your favorite Disney foods, like churros, will still be available when the parks reopen. However, the chances of having high-contact buffets are probably unlikely since the Federal Drug Administration’s (FDA) COVID-19 best practices guidelines advise: “Discontinuing operations, such as salad bars, buffets, and beverage service stations that require customers to use common utensils or dispensers.” Instead, we expect to see servers behind protective barrier dishing food for guests. And expect to use the My Disney Experience app to order food in advance and even to read menus to cut down on crowds and additional contact. Take a look inside Disney’s top-secret flavor laboratory.