Some of these are rules you probably have at your own job, but others are strictly TSA-specific! 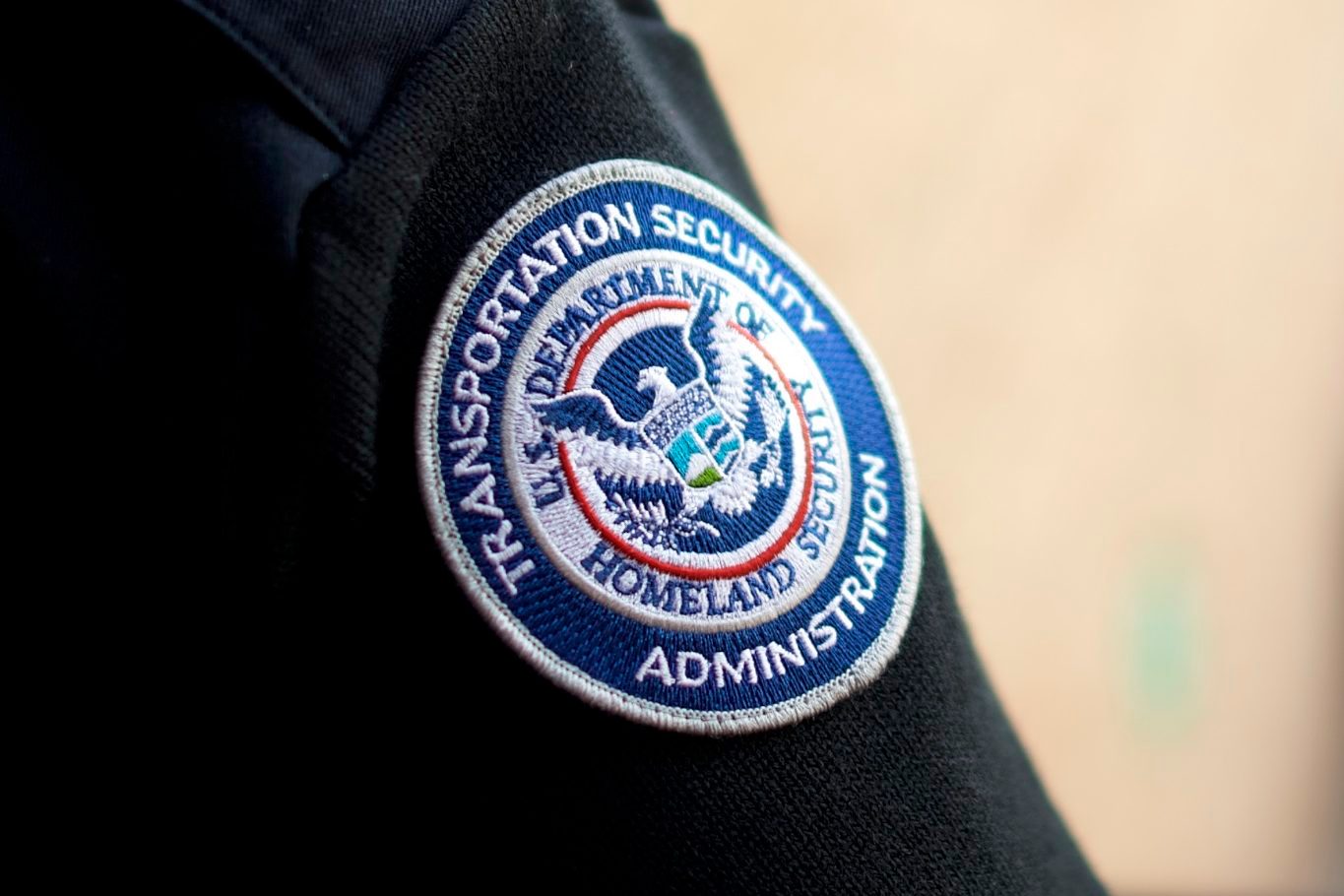 They enforce rules, but they have them too

To the everyday traveler, the Transportation Security Administration (TSA) might just represent a barrier between you and your travel destination. You may worry they might confiscate your harmless luggage items or select you for an individual scan. But of course, they’re people too, just doing their jobs. And like any employees, they have rules and regulations they have to follow. Here are some things TSA agents can’t do on the job. Plus, find out the rules they have to enforce that they’re not fans of either—plus these other things TSA agents won’t tell you. 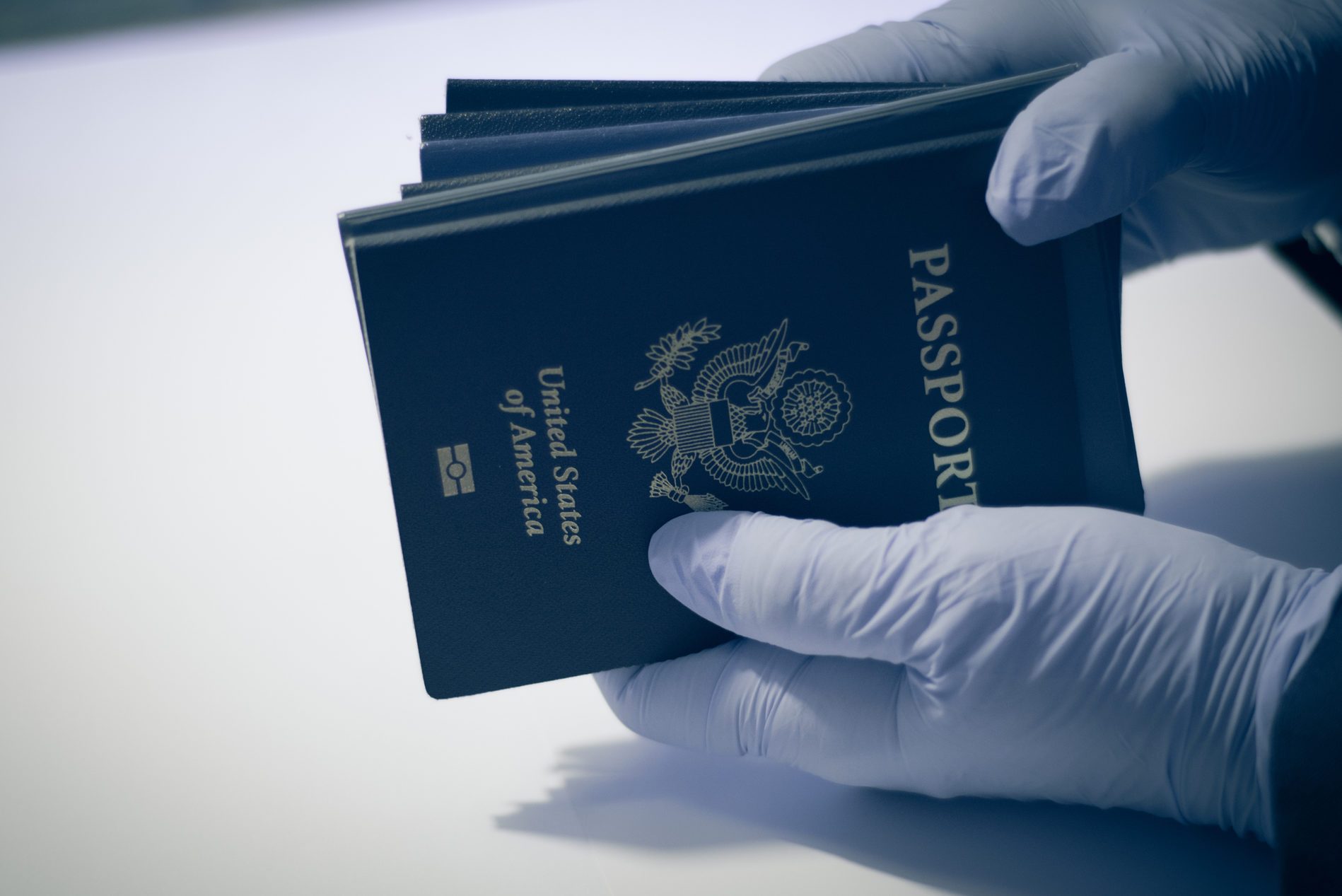 Not be a U.S. citizen

There are only a few basic requirements for becoming a TSA agent, but this is one of them. To become a TSA agent, you must be a U.S. citizen or national. You also must have a high school diploma or GED, at the very least—but Criminal Justice Degree Hub says that having a college degree, particularly one in criminal justice, will definitely boost your chances. 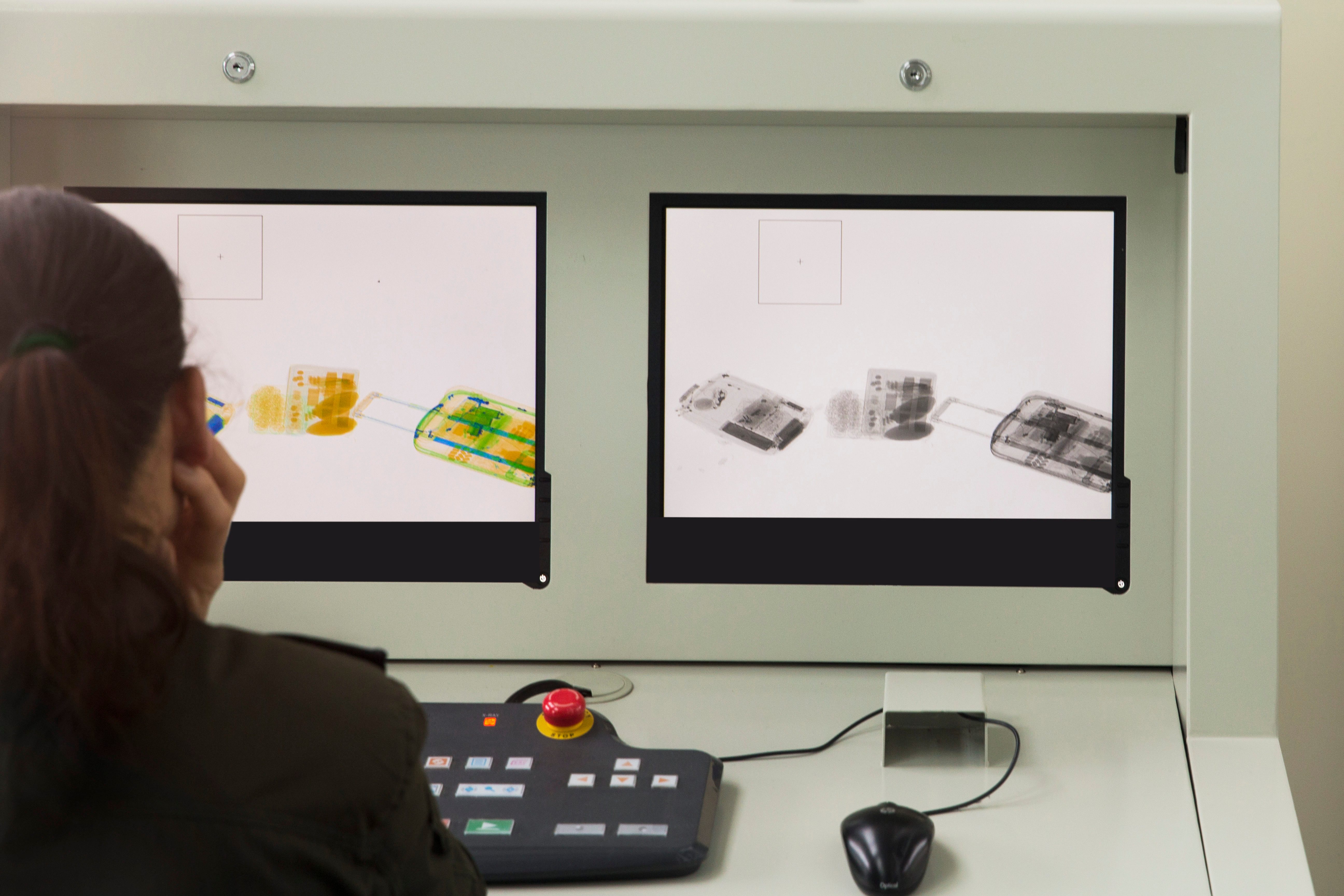 Have less than a year’s experience

Anyone applying to be a TSA agent needs to have at least a year’s worth of experience working as a security officer or an X-ray technician, according to Criminal Justice Degree Hub. You also must pass a rigorous background check. For instance, for a current Executive Director position open at the TSA, applicants must pass a Single Scope Background Investigation, a security check for top-secret positions and programs. Find out the mistakes people make at the airport that bother the TSA the most. 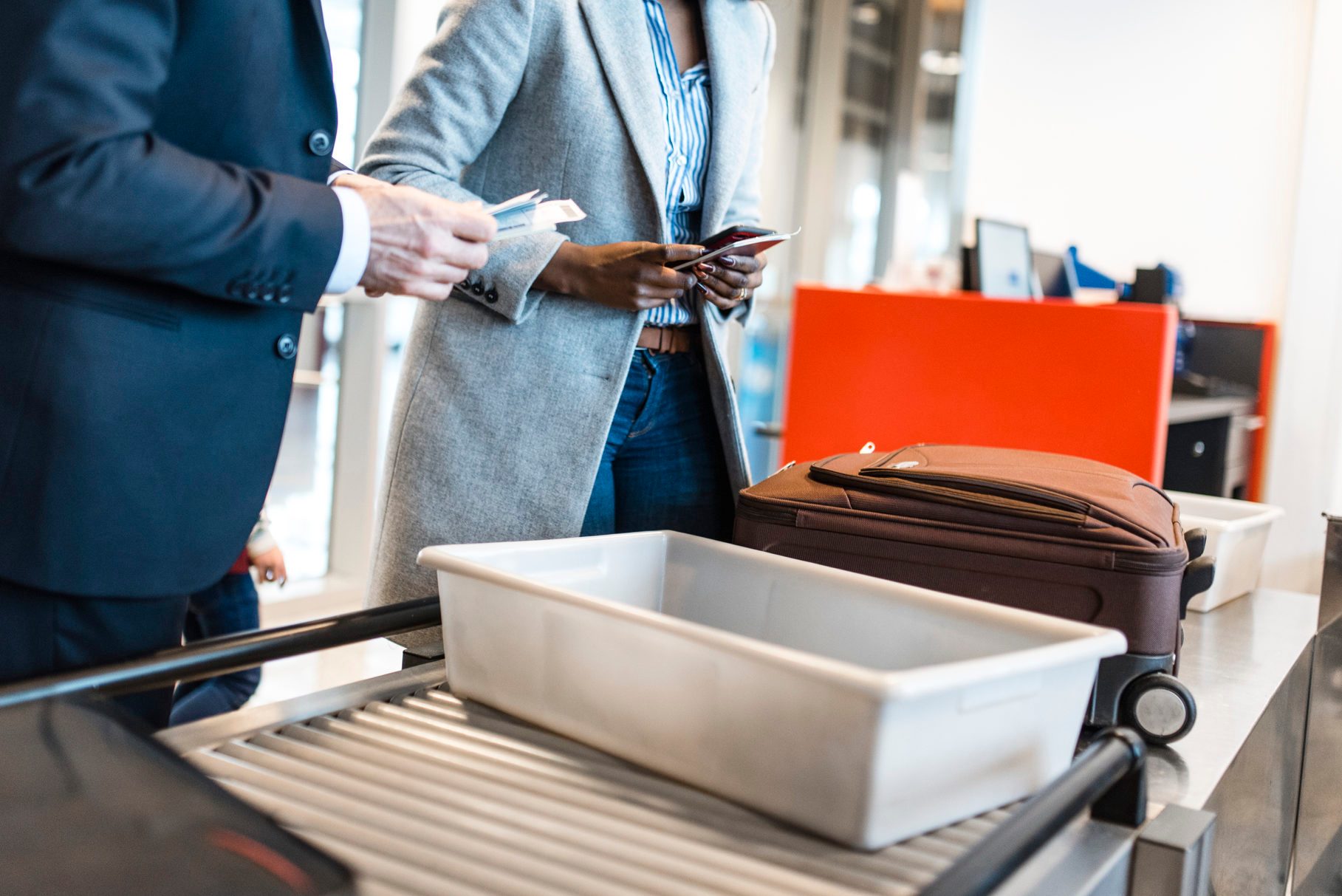 You’d think this would be a given, but sadly, no. Religious and political beliefs are protected by the First Amendment, so TSA agents are not allowed to ask travelers about these things—including travelers from other countries. And if they do, you don’t have to answer.  “Religious and political beliefs and associations…can’t be considered in the decision of whether to allow you to enter the country,” says Jordan Bishop, founder of finance and travel site Yore Oyster. “You do not have to answer questions about your religious beliefs and practices or political opinions, and you cannot be denied entry to the United States for declining to answer such questions.” 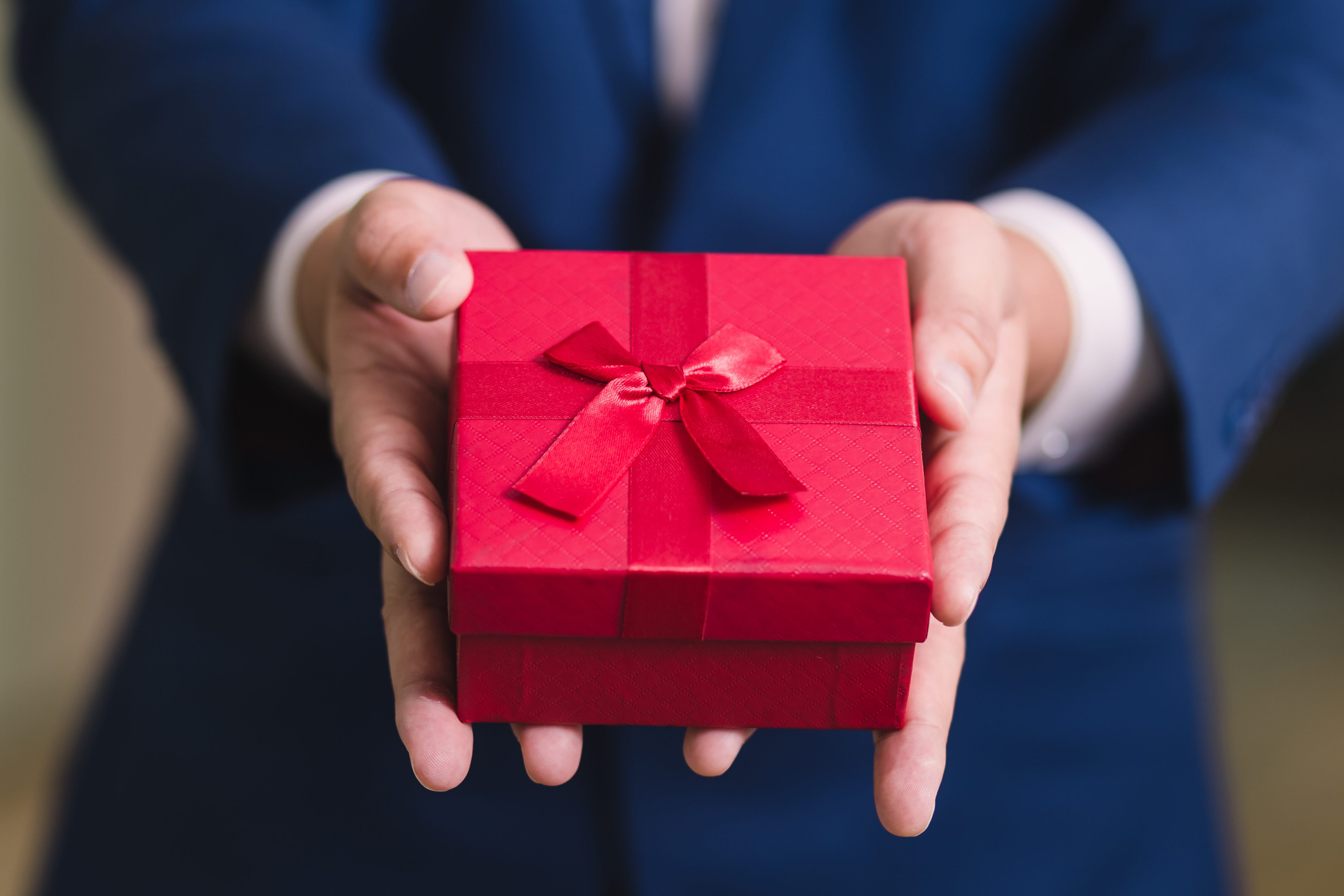 You might not think of TSA agents as a particularly beloved or appreciated profession, but there are still generous travelers who want to tip them for the hard work that they do. But, according to regulations, they can’t! As a general rule, this actually applies to all federal employees, not just the TSA. This became especially relevant during 2018–2019’s government shutdown when travelers wanted to offer gifts to the unpaid TSA workers—but couldn’t. But, one surprising thing the TSA is allowed to do? Keep the (copious) leftover change people leave behind! 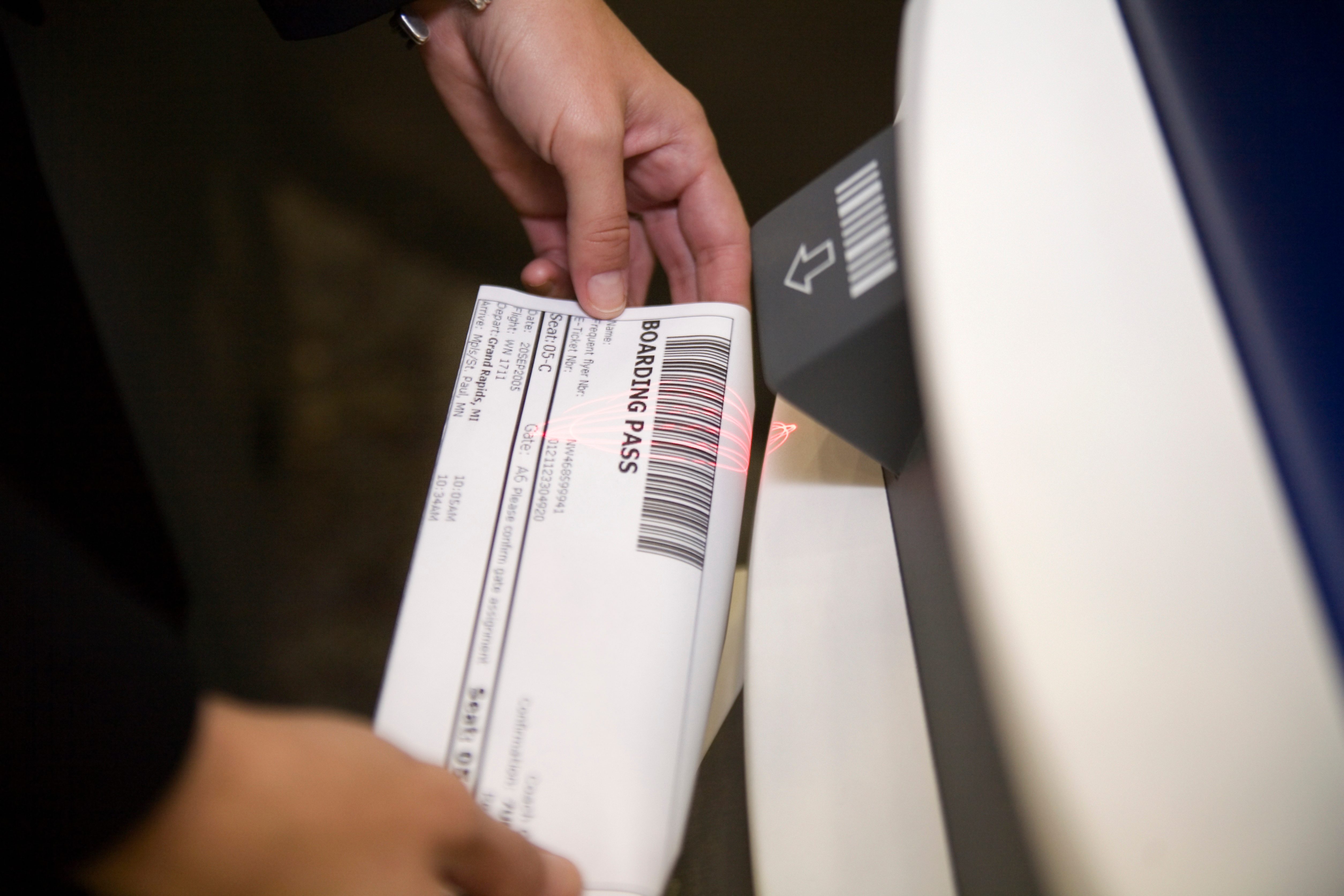 This is another rule in place to prevent undue discrimination. “TSA agents can’t demand that you remove garments on your head, including hats if they are religious in nature,” says Philip Weiss, former flight attendant and founder of travel blog PhilipWeiss.org. The only exception is if you set off the metal detector, in which case you should still be allowed to remove it in a separate room, for your privacy, and “to avoid public humiliation or causing a commotion at the airport.” Once you’re on the plane, find out these things flight attendants can’t do, too. 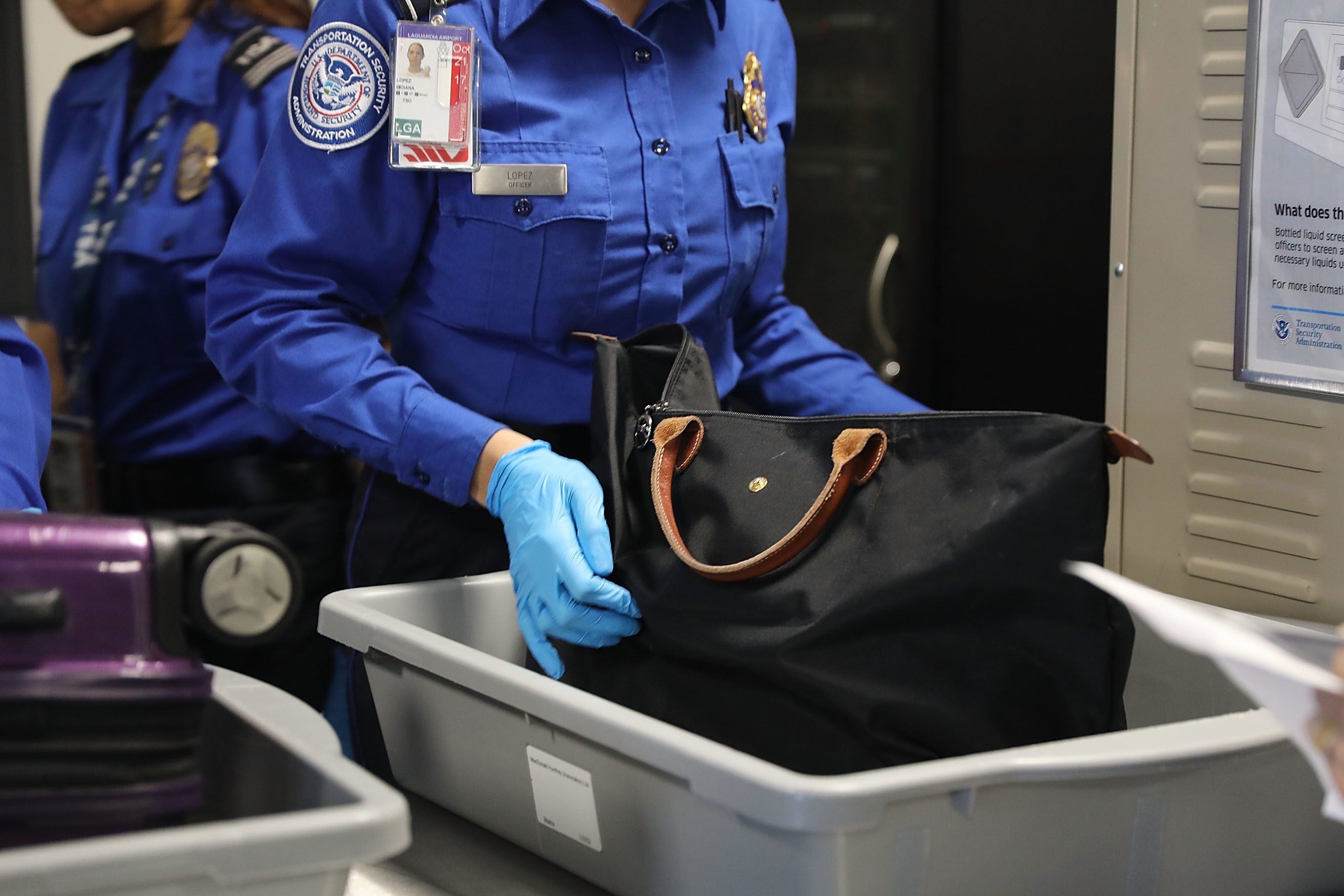 Because of the 2001 Aviation and Transportation Security Act, a post–9/11 measure, TSA agents are not permitted to strike, because of their role in national security: “An individual that screens passengers or property, or both, at an airport under this section may not participate in a strike, or assert the right to strike, against the person (including a governmental entity) employing such individual to perform such screening.” This means, not only that they can’t strike, but also that “they are prohibited to encourage any other federal employee to take part in a strike, work stoppage, or slow down,” explains Chris Choi, CEO of VIP Travel. Like the rule against gifts, this rule received a surge of attention during the recent government shutdown, as outsiders wondered why the unpaid TSA workers couldn’t just go on strike. It was because they were legally prohibited, and it likely would be detrimental to their careers. 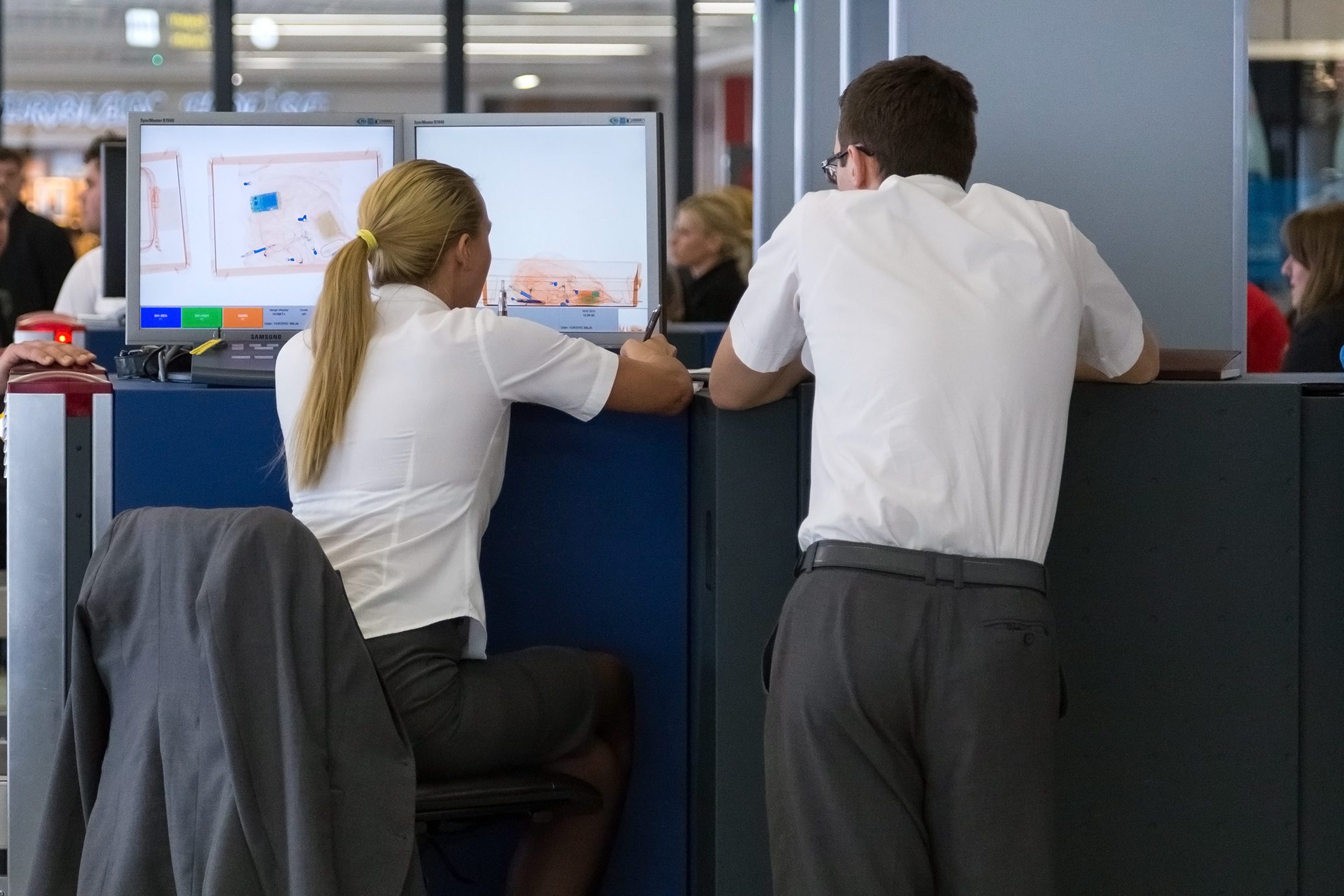 Be in relationships with supervisors

Of course, this restriction is not exclusive to TSA or federal employees; it’s probably somewhat frowned upon (if not prohibited) where you work as well. But it’s safe to assume that it’s that much more strict for TSA folks since it’s a federal job. “TSA Agents are restricted from having romantic or intimate relationships with supervisors,” says Choi. “This includes both direct and indirect supervisors.” I was a TSA agent for two years—here’s why you’re getting stopped. 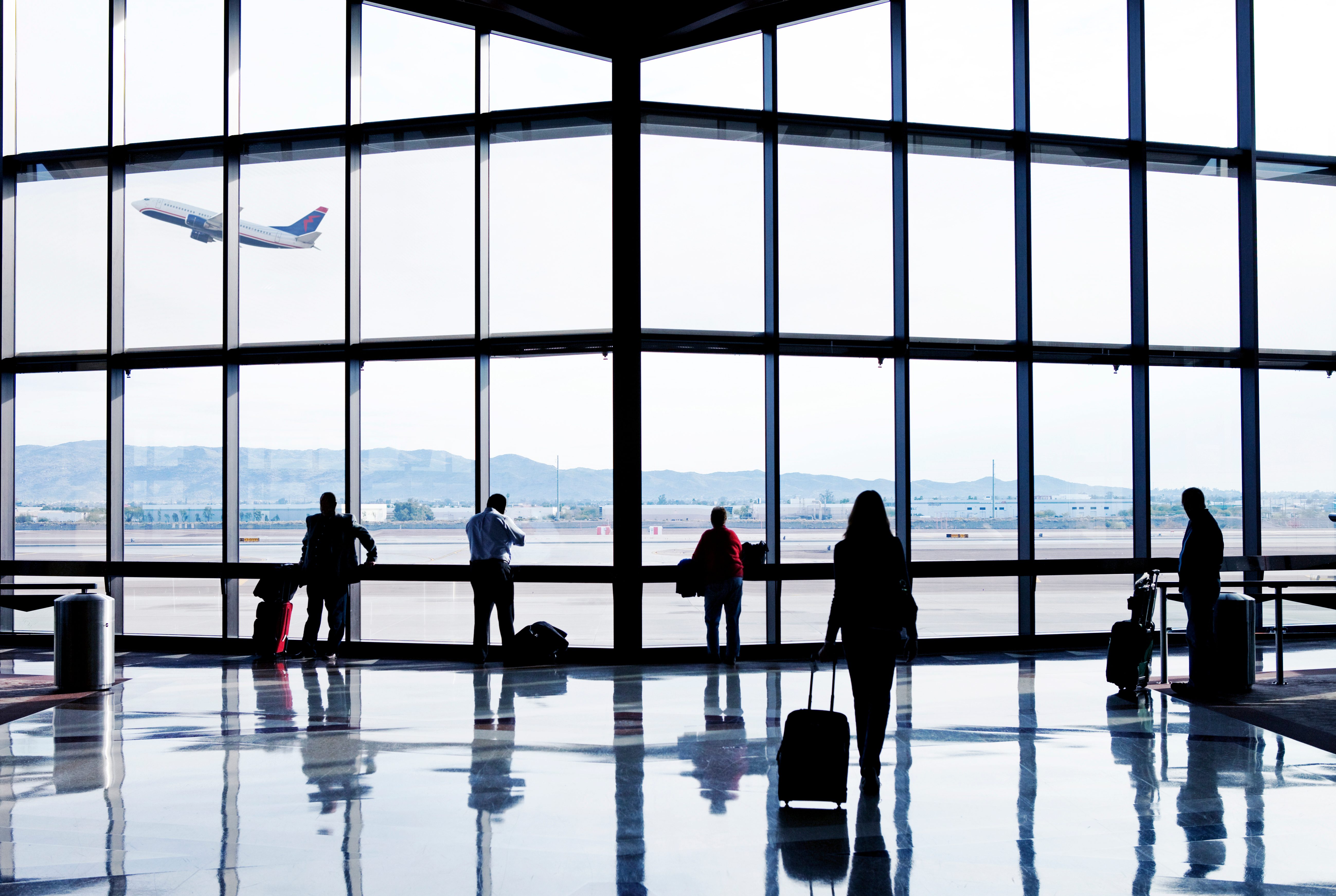 Another thing that’s frowned upon at most workplaces is the use of substances—both the use of any illegal ones and the excessive, reckless use of legal ones like alcohol. But, again, this is a bit more serious for the TSA—especially since that’s some of the stuff they commonly confiscate! “While this [rule against substances] sounds relatively straightforward and obvious, it actually also includes prescriptions and over-the-counter medications too,” Choi explains. “Failure to comply can see the agent being removed from any safety and security-sensitive duties.” Find out the 13 things that are getting your luggage flagged by the TSA. 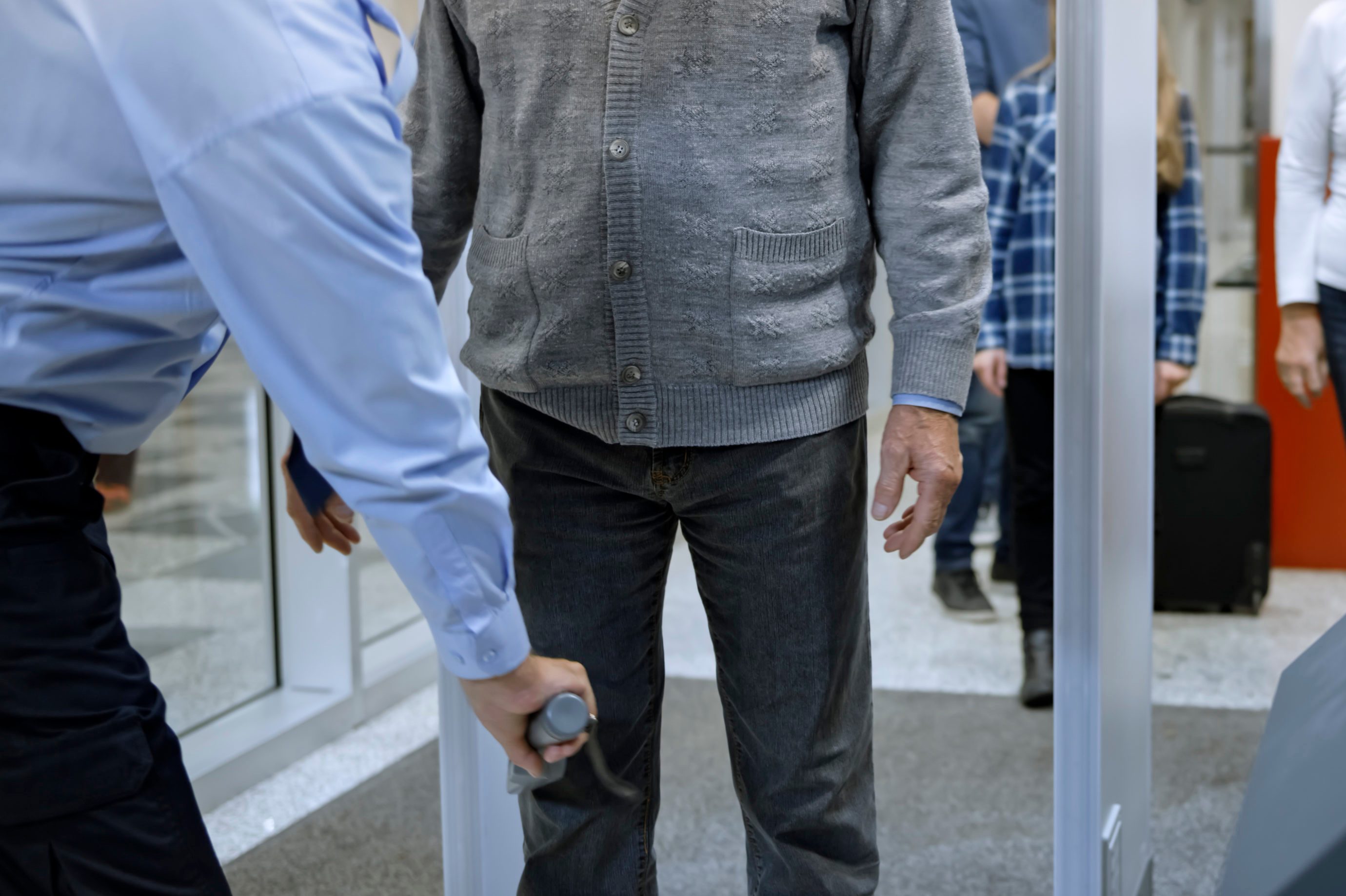 Here’s another one that affects you, the traveler, more directly. Travelers who are 75 and older, or 12 and younger, don’t have to undergo the full security process. They don’t have to remove their shoes or undergo full-body scans. Therefore, TSA agents can’t force people in these age groups to be subjected to a full scan. (Though if someone in either age group triggers an alarm, they can be subject to a more thorough search.) The TSA’s site also points out that seniors with medical implants might also require special screening. You can also opt-out of some of the usual security processes by applying for TSA pre-check—here’s how to do that. 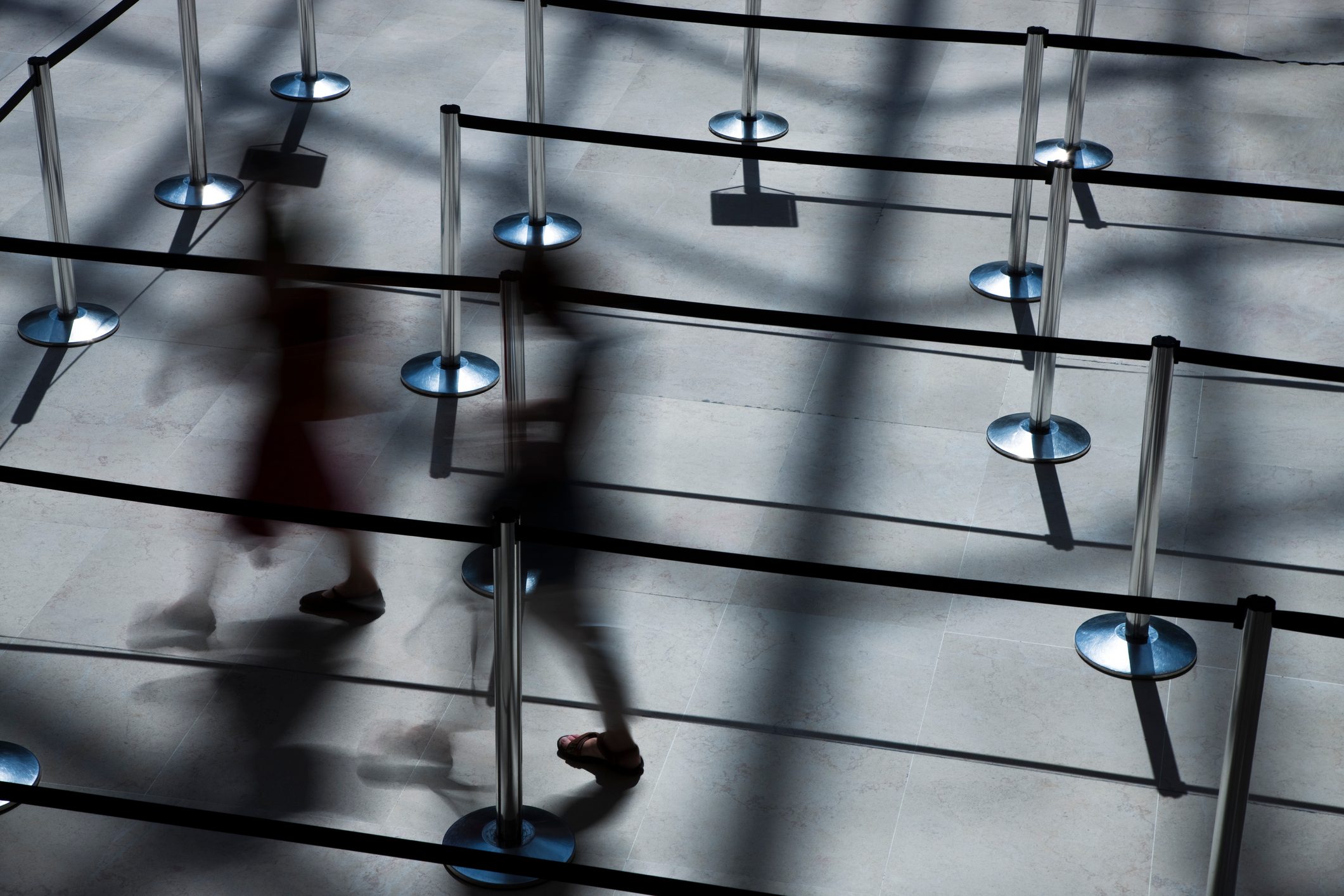 Deny entry to people who have a legal claim

People who have a “legal claim” to be in the U.S. include citizens and permanent residents, Bishop says. So the TSA is legally prohibited from denying such people entry. This means that “if you are a citizen or permanent resident and the officers’ questions become intrusive, you can decline to answer those questions,” Bishop explains further since they legally cannot deny you entry. However, he warns that if you do choose not to answer questions, “you should be aware that doing so may result in delay and/or further inspection.” Next, find out the things a TSA agent first notices about you.