Like father, like son they say, and if these two weren't over 30 years apart in age, it might be nearly impossible to tell Prince William from his firstborn son, Prince George. 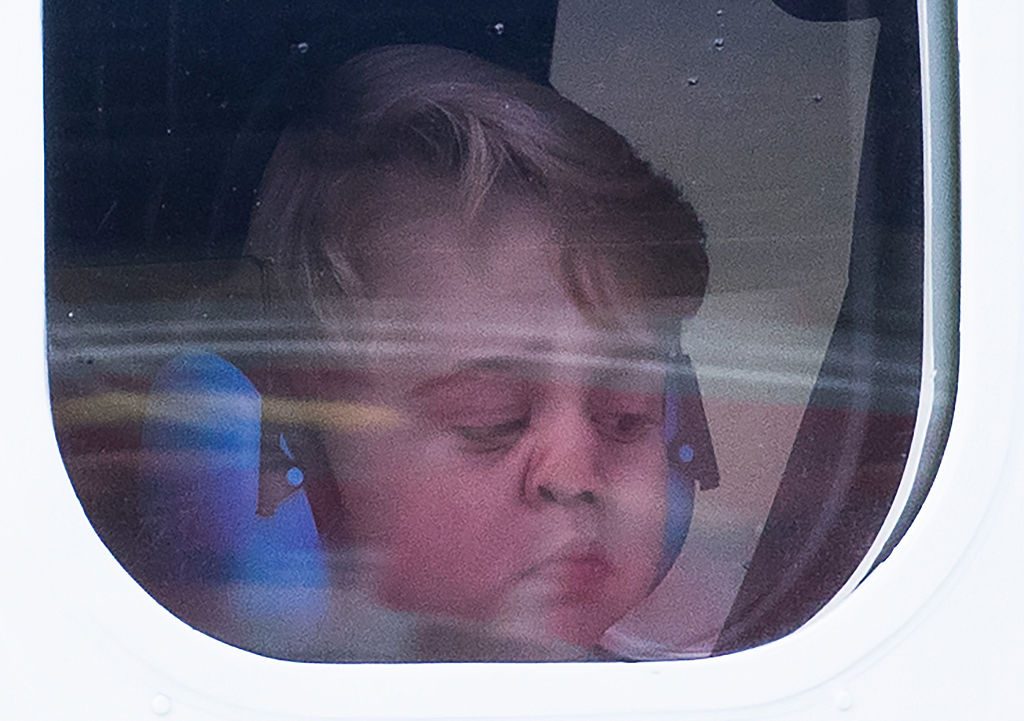 Prince George of Cambridge turns seven on July 22, 2020, and the third-in-line to the throne shows no signs of stopping being heart-meltingly adorable any time soon. Clearly, he got his good looks from both his parents, not to mention his late grandmother, Diana, Princess of Wales, who never met a camera that didn’t fall in love with her at first sight. But as we perused some of our favorite shots of the budding future monarch, we couldn’t help but notice some serious resemblance to his dear dad, the second-in-line future king, Prince William. Let’s take a look, shall we? Find out 14 things you never knew about Prince George. 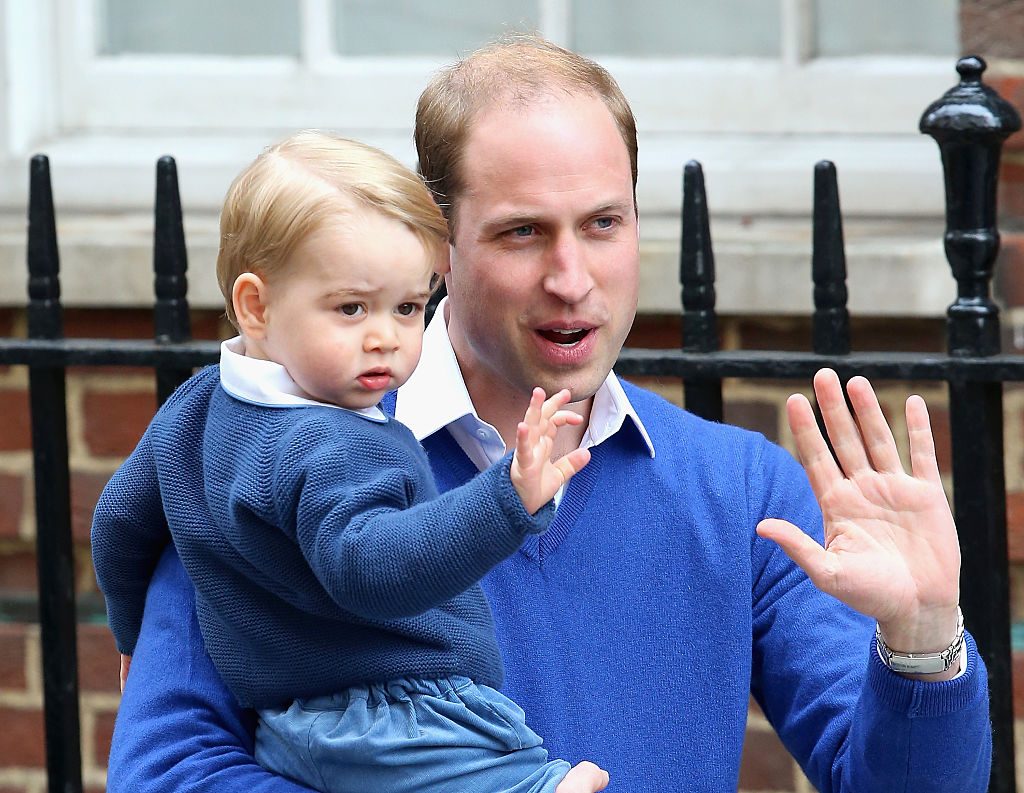 Obviously, the Duke of Cambridge would have to be well aware of his son’s resemblance to him, and what better way to accentuate that family resemblance than to turn up all matchy-matchy for a public meet-and-greet. That’s precisely what happened after the Duchess of Cambridge (aka Kate Middleton) delivered a brand new princess, Princess Charlotte, on May 2, 2015. Father and son turned up together to visit Mummy in hospital, wearing perfectly coordinated cerulean sweaters and waving to their adoring public in synchronized unison. Did you know that sometimes what the royal family is wearing has a secret meaning? Here’s how to crack the royal haberdashery secret code. 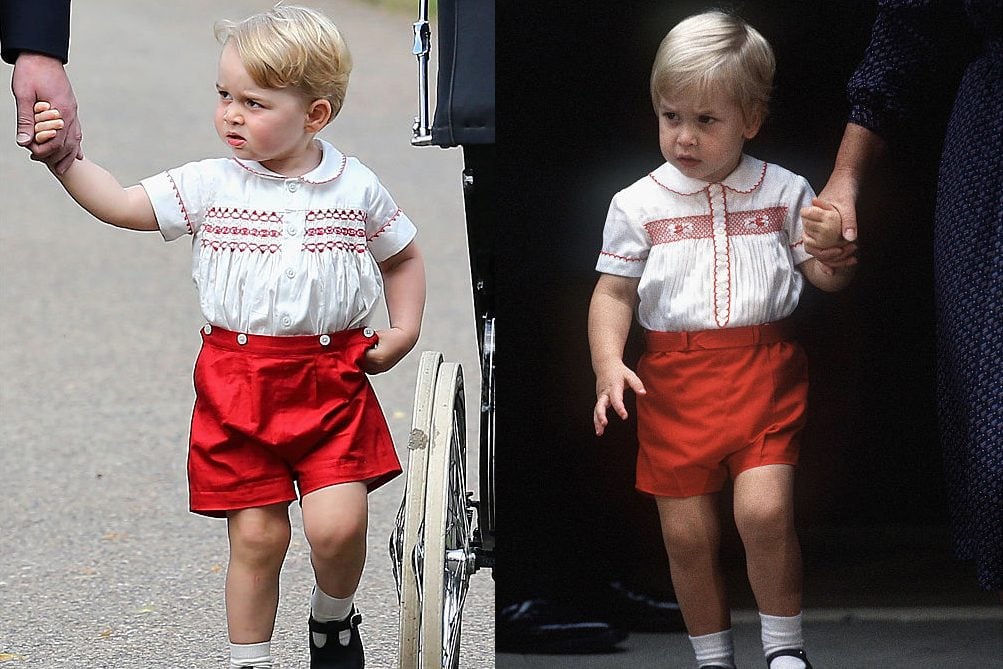 This twinning goes way back

The question is, can you even tell them apart here? In this composite photo, we have on the right Prince William on September 16, 1984, in London as he leaves St. Mary’s hospital after visiting his newborn baby brother, the ginger-haired Prince Harry, and on the left, Prince George arriving with his family for the christening of Princess Charlotte on July 5, 2015. Ever notice you tend to see His Royal Cuteness wearing shorts, rather than pants? Here’s why. 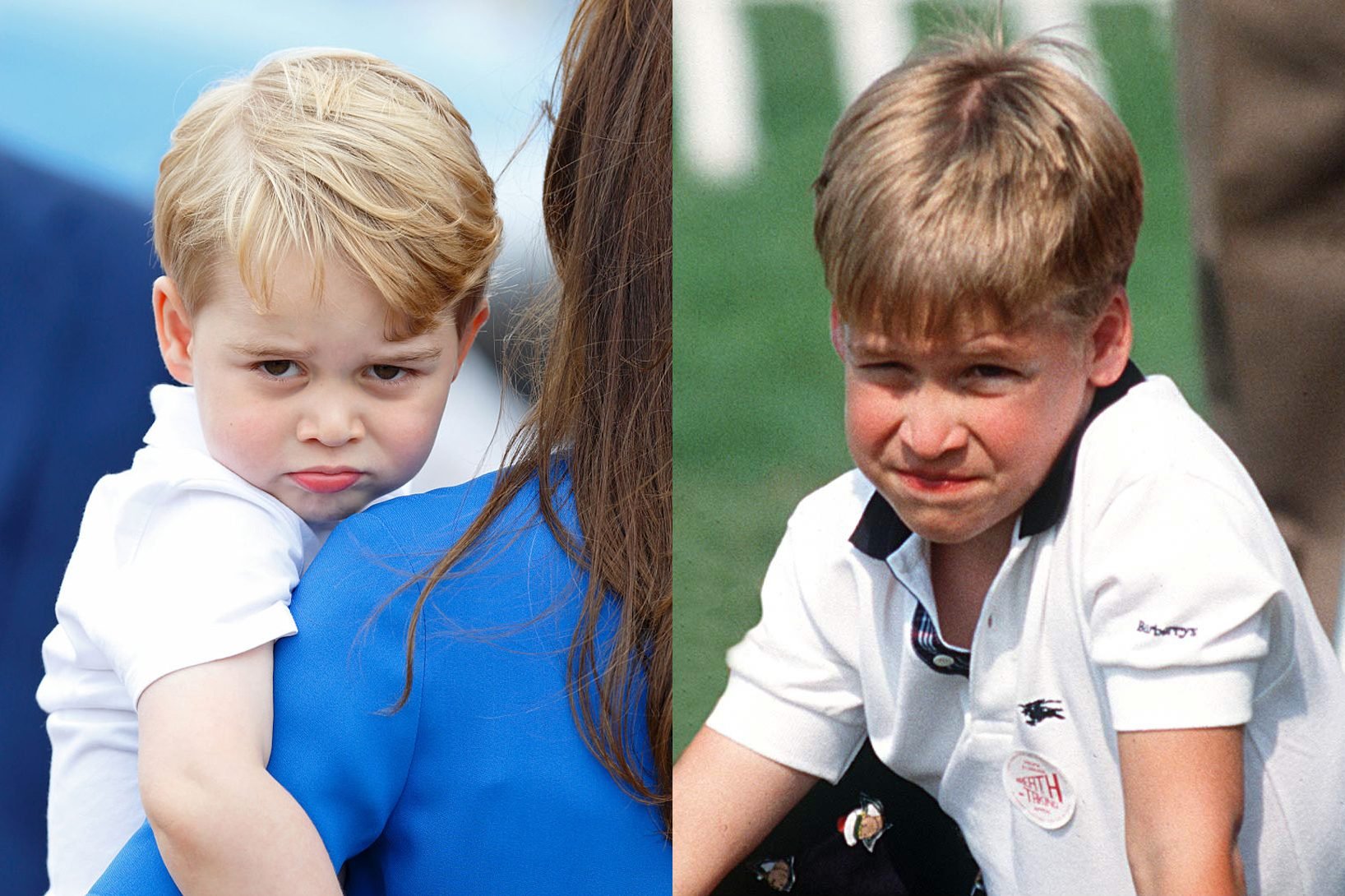 Prince William looks unimpressed in this photo dating back to his teenage years. But then, perhaps the air of mystery contributed to the young, future king as a teenage heartthrob. Likewise, you can almost hear Prince George whining about how bored he is at the Royal International Air Tattoo military air show in this image. See the Duke of Cambridge acting like the king he is destined to be. 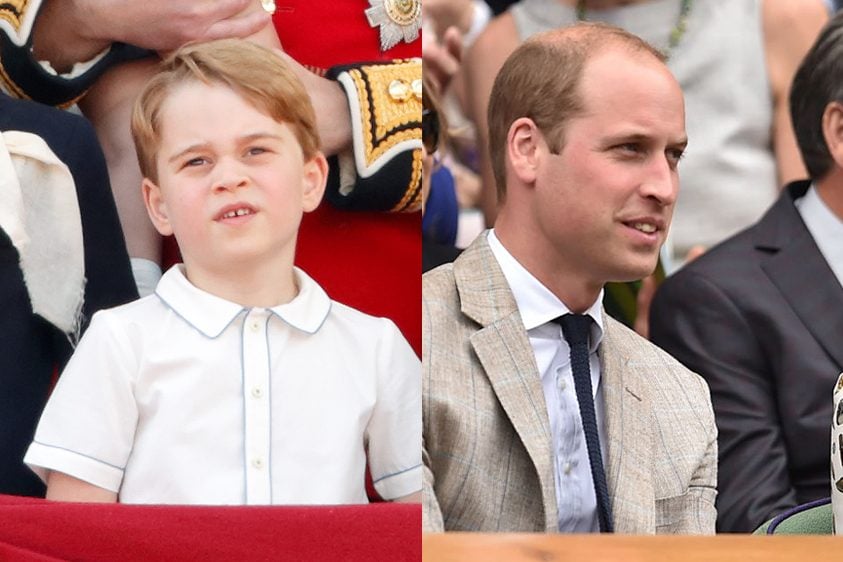 Both William and his son have a knack for wearing their feelings on their faces, whether they intend to or not. Here we see William watching Wimbledon 2016. He’s every bit the polite future king, supporting an important U.K. cultural event, Yet, his boredom is unmistakable. Likewise with William’s son, George, who looks as if he’s had just about enough of watching the flypast portion of 2018’s Trooping the Colour, the ceremony involving over 1,400 guardsmen and cavalry and held each year in honor of the reigning monarch’s birthday. Due to COVID-19, Trooping the Colour was not held this year, but here are 19 vintage photos that really capture the splendor of this centuries-old tradition. 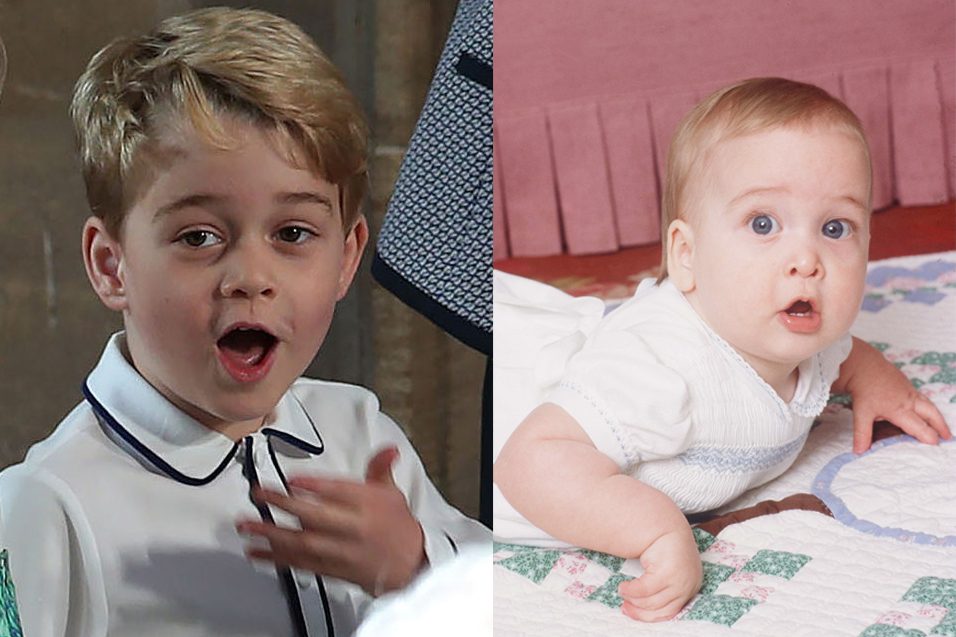 A look of surprise

Their extremely expressive faces must be genetic, rather than learned, assuming this photo comparison is any indication. Here we see Prince William in an at-home photoshoot from February 1983, looking adorably surprised. We can’t say for sure what he’s surprised by, but perhaps he hasn’t yet gotten used to the constant presence of a camera in his life? And there is Prince George as he arrives at the 2018 wedding of his cousin Princess Eugenie of York to Jack Brooksbank. While we also don’t know what George is so surprised by, we can assume that after five years of cameras clicking in his face, it’s likely whatever it is has nothing to do with the fact that his picture is being taken. Speaking of candid shots, here are 19 of the royal family throughout history. 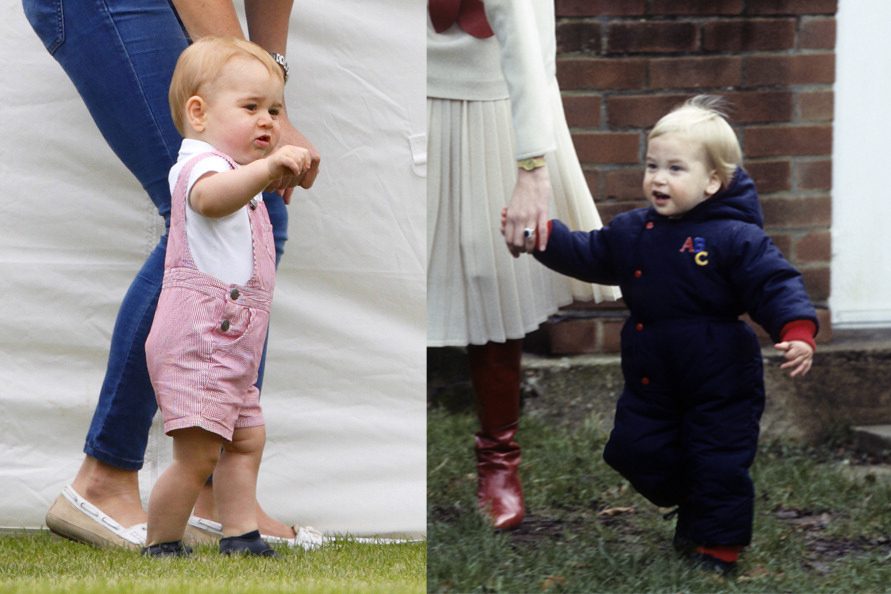 Learning to walk is one of humanity’s great equalizers, so in the case of Prince George and his father, Prince William, what strikes us in most about these photos is not that both future kings are learning to walk so much as that they both do so adorably with their mums and with such an uncanny cross-generational resemblance. 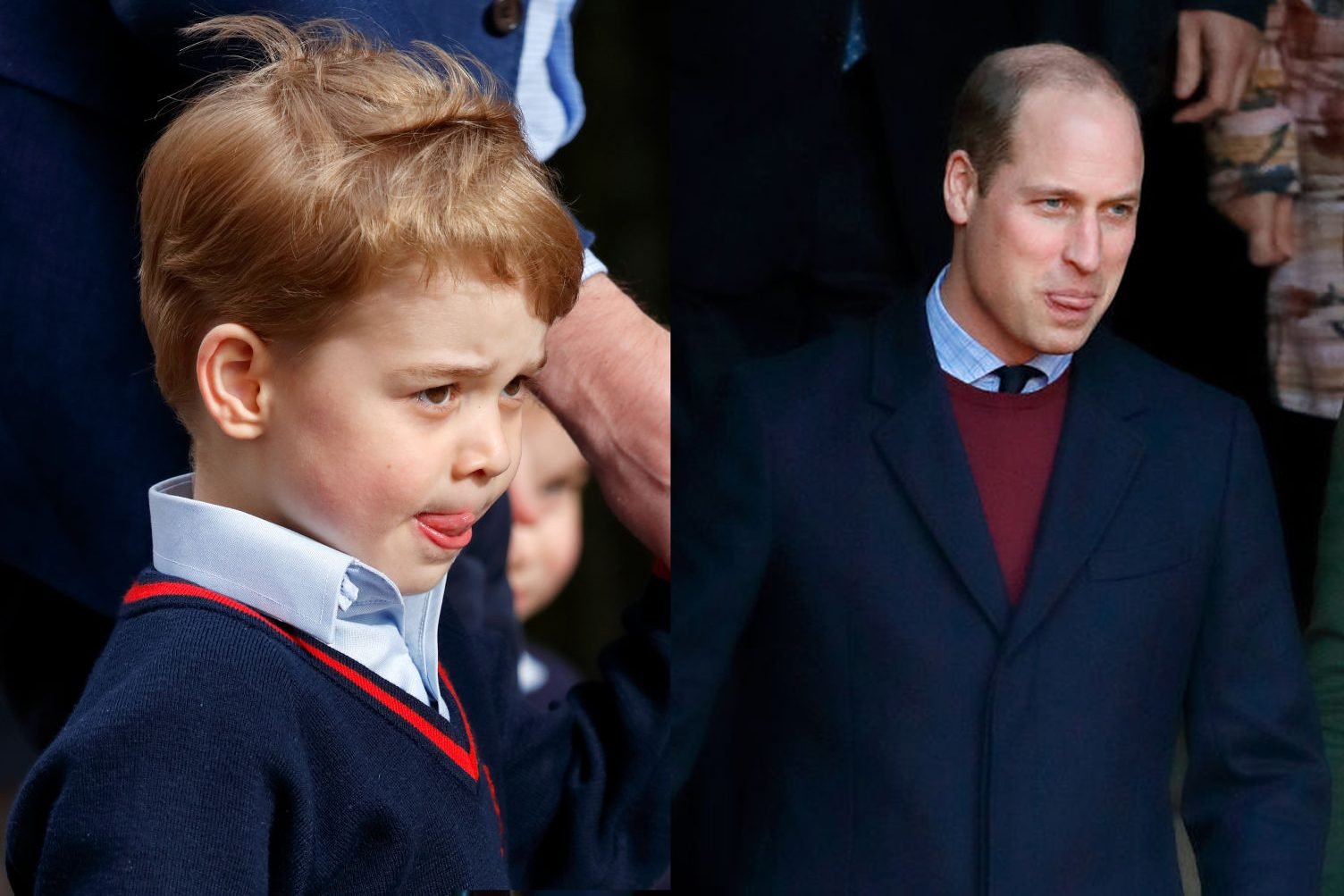 It’s must be on the tip of their tongues

Both William and George seem to have a habit of sticking out their tongue when concentrating, and it’s uncanny how much they look alike while doing so. Here we see Prince William sticking out his tongue as he commences a walkabout on January 15, 2020, in Bradford, England and Prince George sticking out his tongue as he arrives at St. Mary’s Hospital to visit his newborn baby brother Prince Louis on April 23, 2018. Royal watchers won’t want to miss these 20 rarely seen photos of Princess Diana. 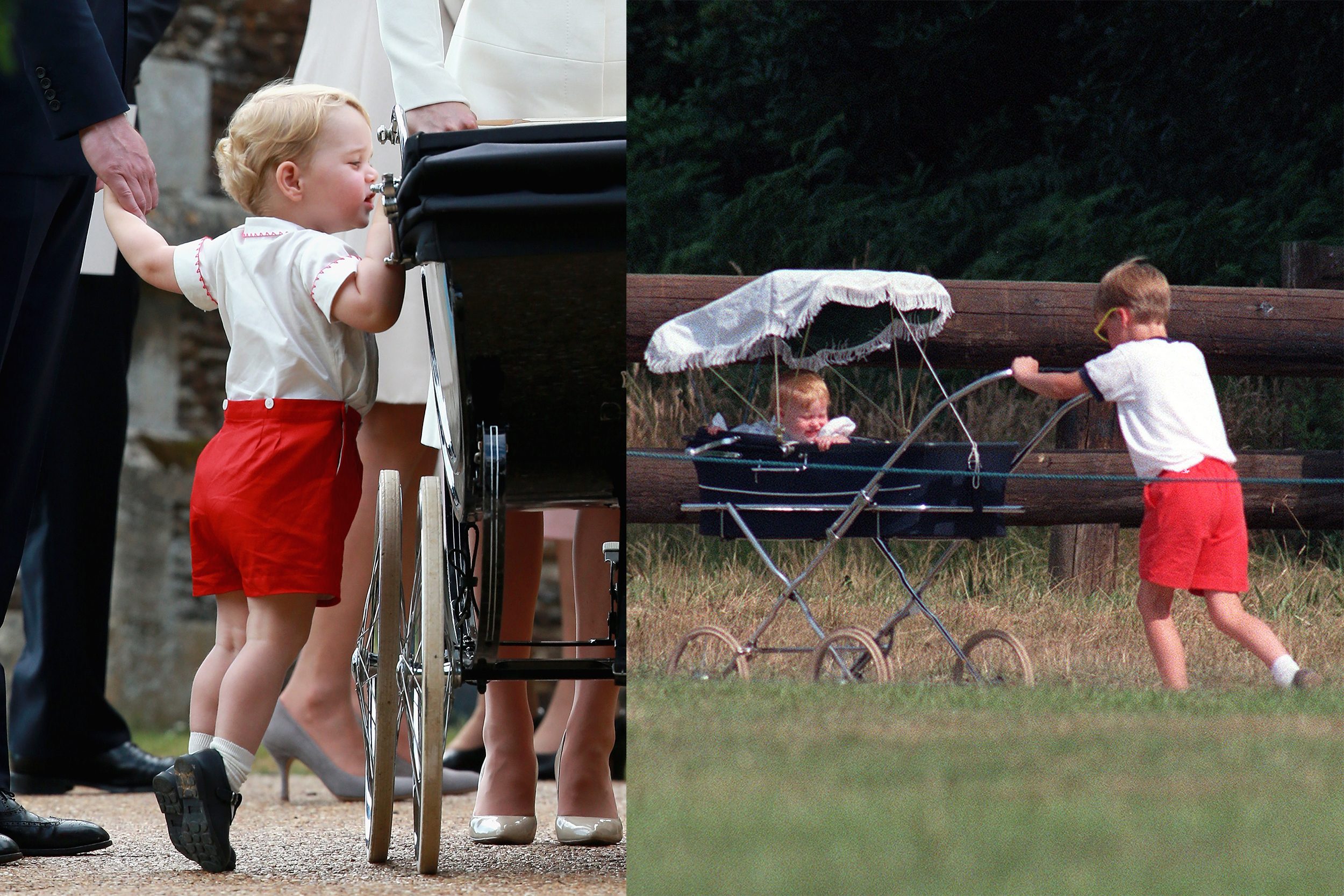 Typically, when people share a family resemblance, it’s more than just about the way they look. It’s also about how they busy themselves and carry their bodies while doing so. Here we see that play out as young William engages with his baby cousin, Bea, by pushing her pram, while George shows interest in his baby sister, Princess Charlotte, as she’s being pushed along in her pram on the way to her christening. Discover what a body language expert has to say about these iconic photos of Prince William with Kate Middleton. 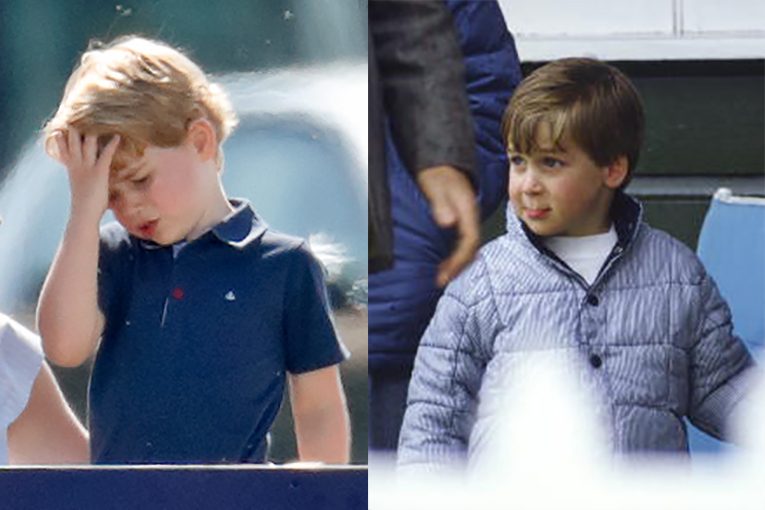 Even the most well behaved royal child will have moments when they lose their composure. Here, a young Prince William looks close to tears after being reprimanded at a polo match while his mother, Princess Diana, waits on the righthand side of the frame. Looking remarkably like his father when he pouts is Prince George, who is also near tears at a polo match and getting consoled by his mother, Catherine, Duchess of Cambridge. Are royals even permitted to cry in public? Let’s take a look at these 16 etiquette rules the royal family must follow. 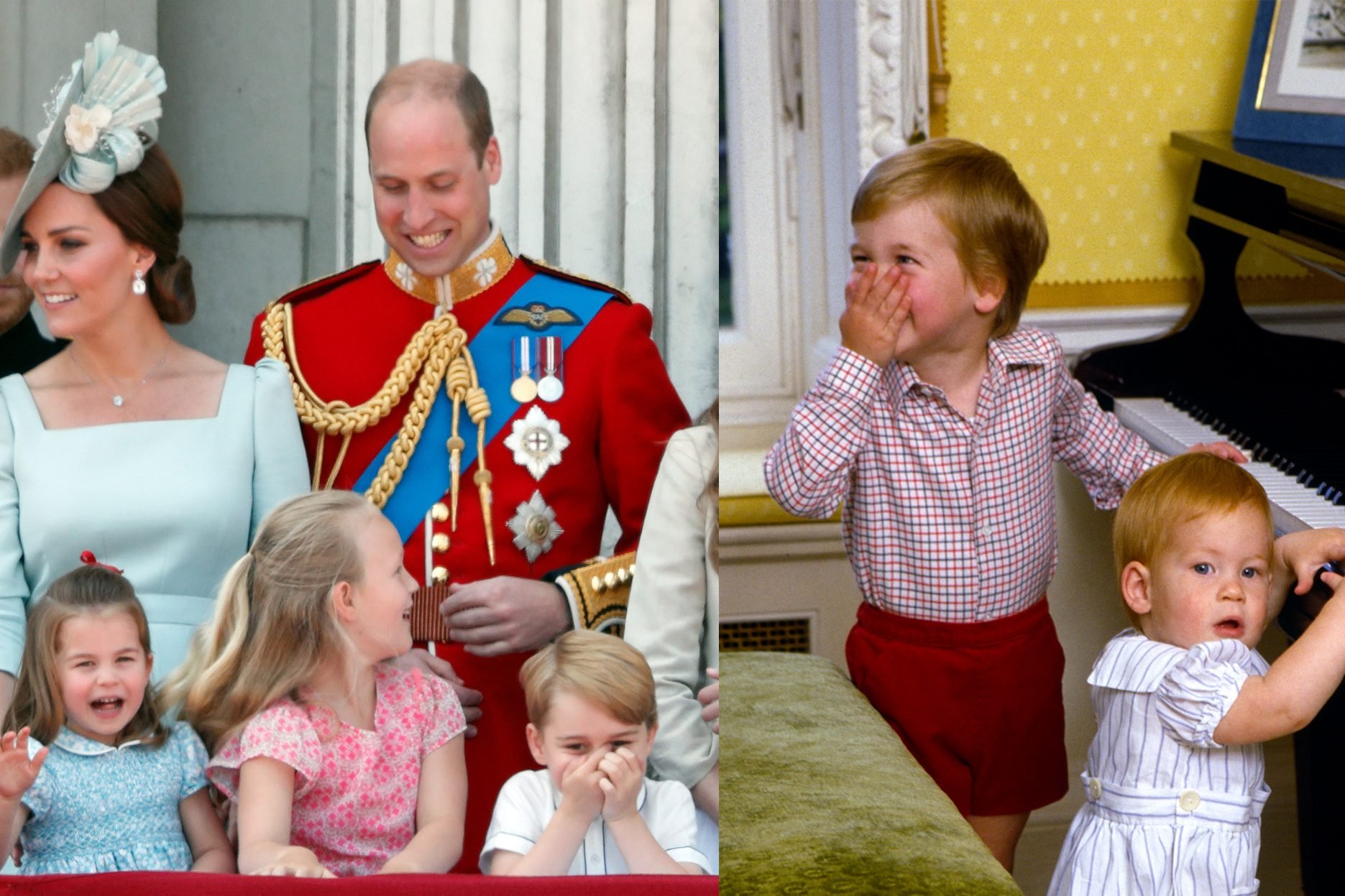 That feeling when you just can’t stifle a laugh

Moving on to happier moments, both Prince William and Prince George tend to do the same thing when overcome by an urge to giggle: they place their hands over their mouths. Here Prince William can’t seem to stifle a laugh as he and his brother, Prince Harry, play with (and on) an upright piano at Kensignton Palace during the 1980s. Many years later, William frees the laughter at the 2018 Trooping the Color, while his lookalike son, George, covers his mouth with both hands as he giggles. 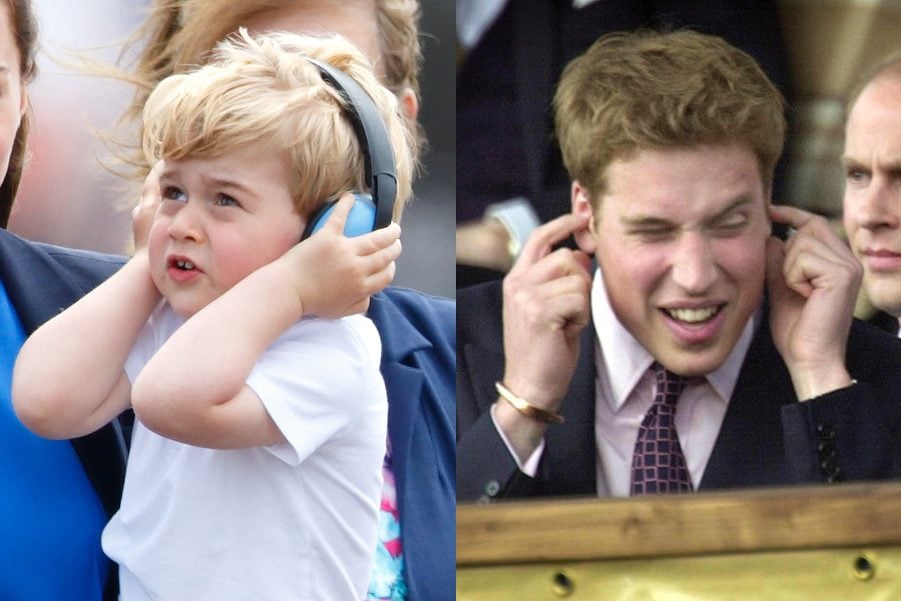 Apparently, neither Prince William nor his son, Prince George, is partial to loud noises. We’ve seen many photos of Prince William covering his ears over the years, such as this one where Prince William is protecting his ears from the noise at the “Party at the Palace” in the gardens of Buckingham Palace in 2002. Likewise, Prince George does not seem to be enjoying all the noise the aircraft are making at 2018 Air Tattoo (first mentioned above). He’s wearing “ear defenders,” and he’s got his hands over them to block out even more noise. Notwithstanding all the jet setting, here are some of the surprisingly parsimonious habits of the royals. 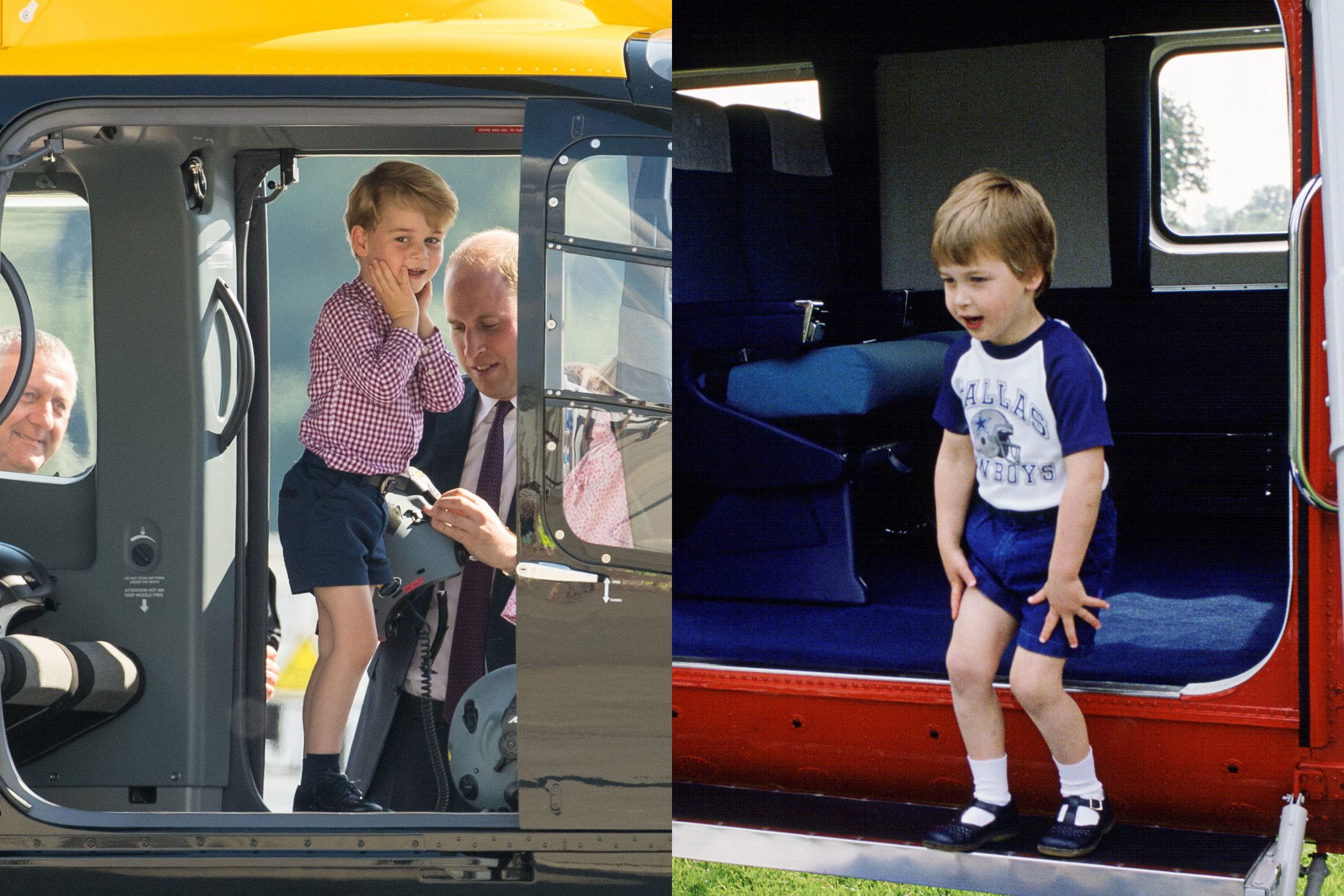 Lots of little boys like mechanical things that move, especially big mechanical things that move, including trucks, trains, and planes. In this case, Prince William as a little boy taking a tour of the Royal Flight Helicopter looks almost exactly like his future eldest son. Next, we see Prince George, who is shown here standing excitedly aboard a rescue helicopter, his dad beside him. Next, read on to see how a body language expert analyzes iconic photos of Prince Charles and Princess Diana.