11 Things Only the Samsung Galaxy Can Do

iPhone users, you might get jealous of these unique features that only the Samsung Galaxy has. 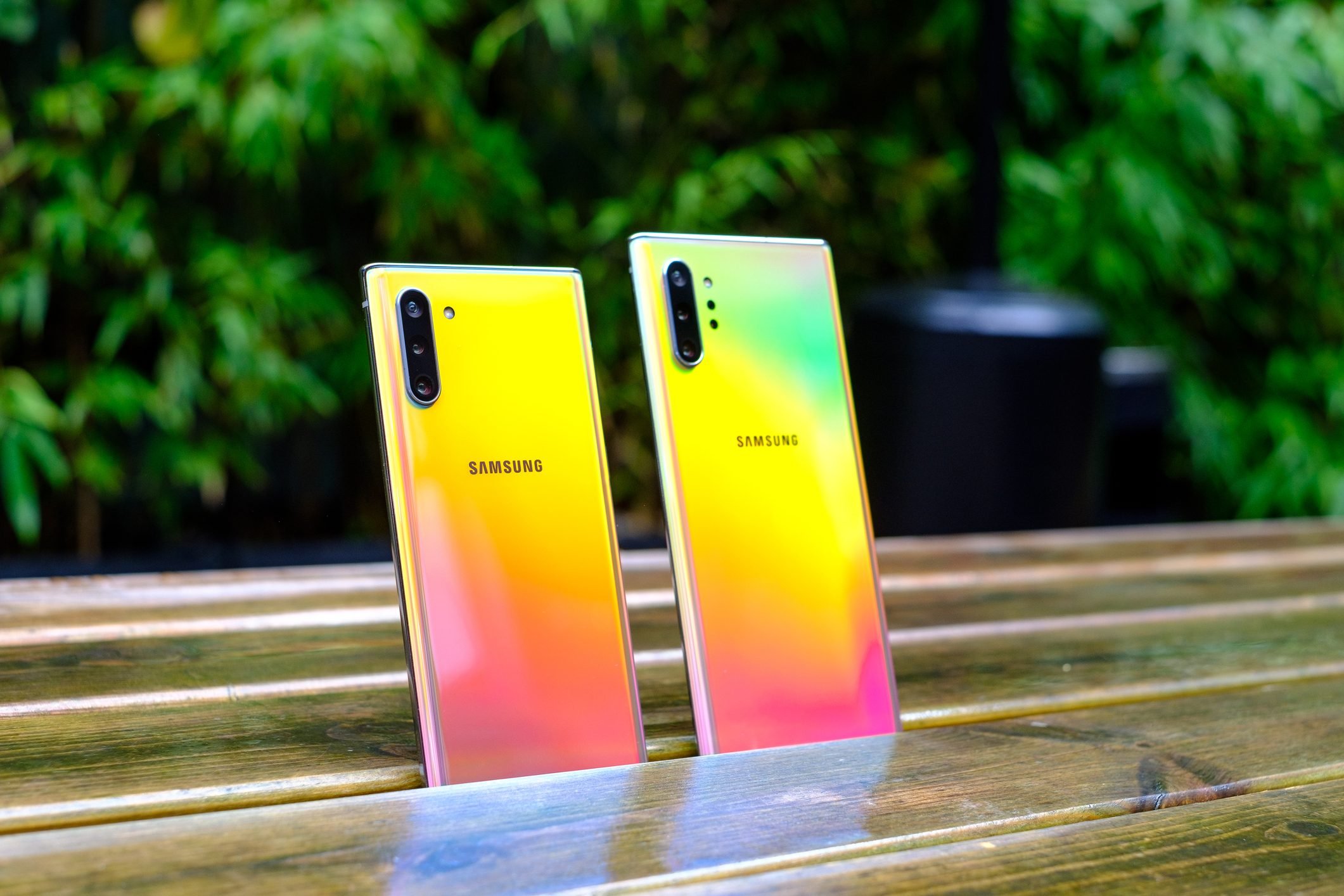 If you’re like most people, you probably own either an iPhone or an Android. If you’re on team Android, you know that the Samsung Galaxy has a few unique features that other Androids don’t. But those who only use iPhones might not know that there are a few things Samsung Galaxys can do that even iPhones can’t. Read on to learn about their cool features. Here are some other hidden Android features you never knew about.

The Samsung Galaxy lets you hide apps and files using the Secure Folder application. This app basically acts like a very secure safe on your phone. You can hide specific apps or files in the Secure Folder that can only be accessed by a password or your fingerprint. You can find this app by going to Settings > Biometrics and security > Secure Folder. “You set a separate password for the folder and it is invisible by default—so won’t show up on your home page. Using the Secure Folder lets you add apps and files that you want hidden, and keeps them safe,” says Andreas Theodorou, Technology Expert at ProPrivacy. “If the phone detects rooting or ROM, the folder may automatically and permanently lock to protect the contents.” Check out these cool tech products that you’ll want to buy this year. 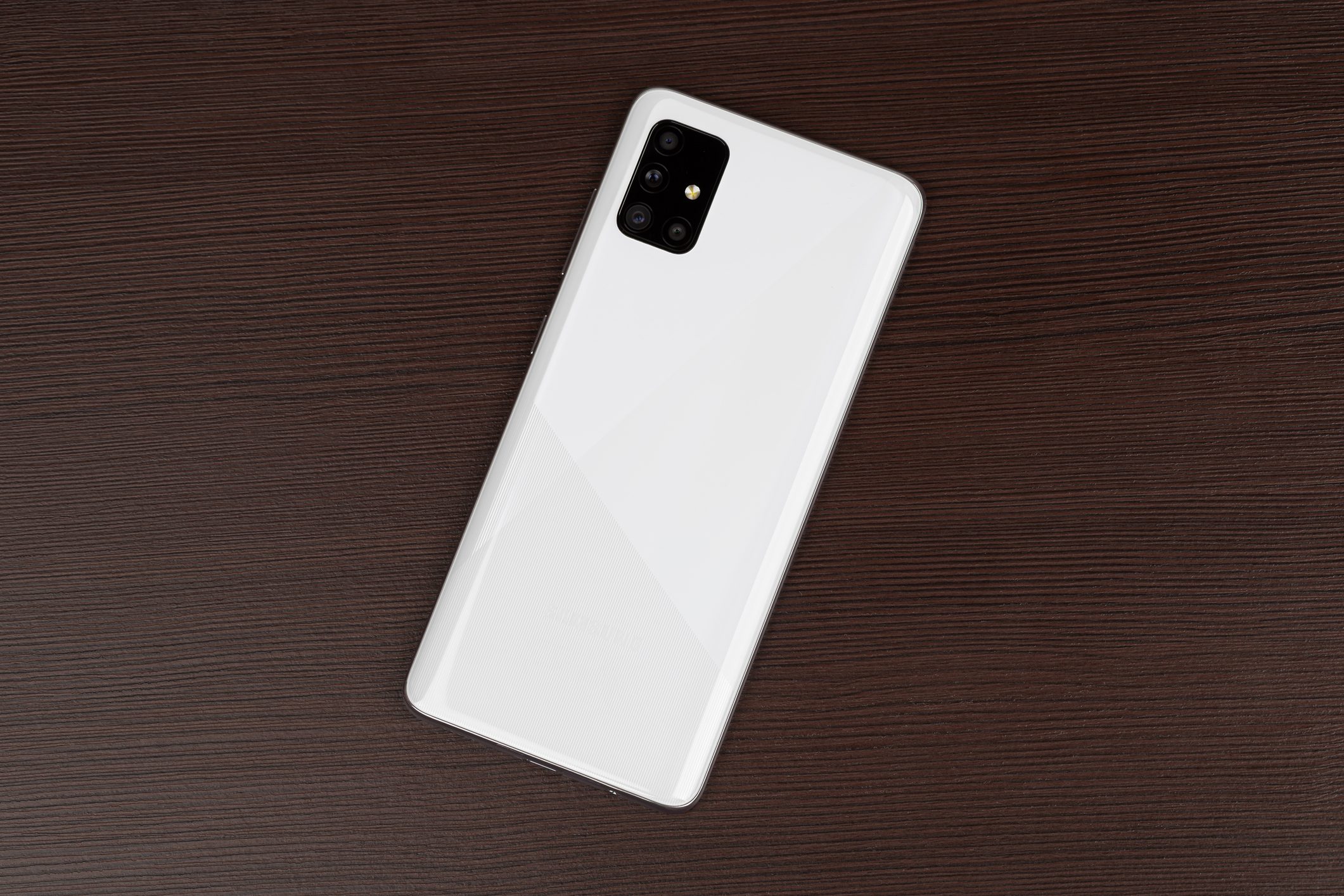 The Samsung Galaxy actually has a wireless charging coil that allows you to charge other Galaxy devices and accessories which is the perfect feature for that couple or friend pair where one person always has a charged phone and the other is always under 10 percent battery. “Simply turn ON the wireless power share from your notification panel and place the other device with their back facing yours,” says  Deepu Prakash, SVP, Process, and Technology Innovation at Fingent, a custom software development company. “You may need to adjust the other device’s position until they are connected, but that usually doesn’t take all that much time.” Here are some things that Androids can do, but iPhones can’t. 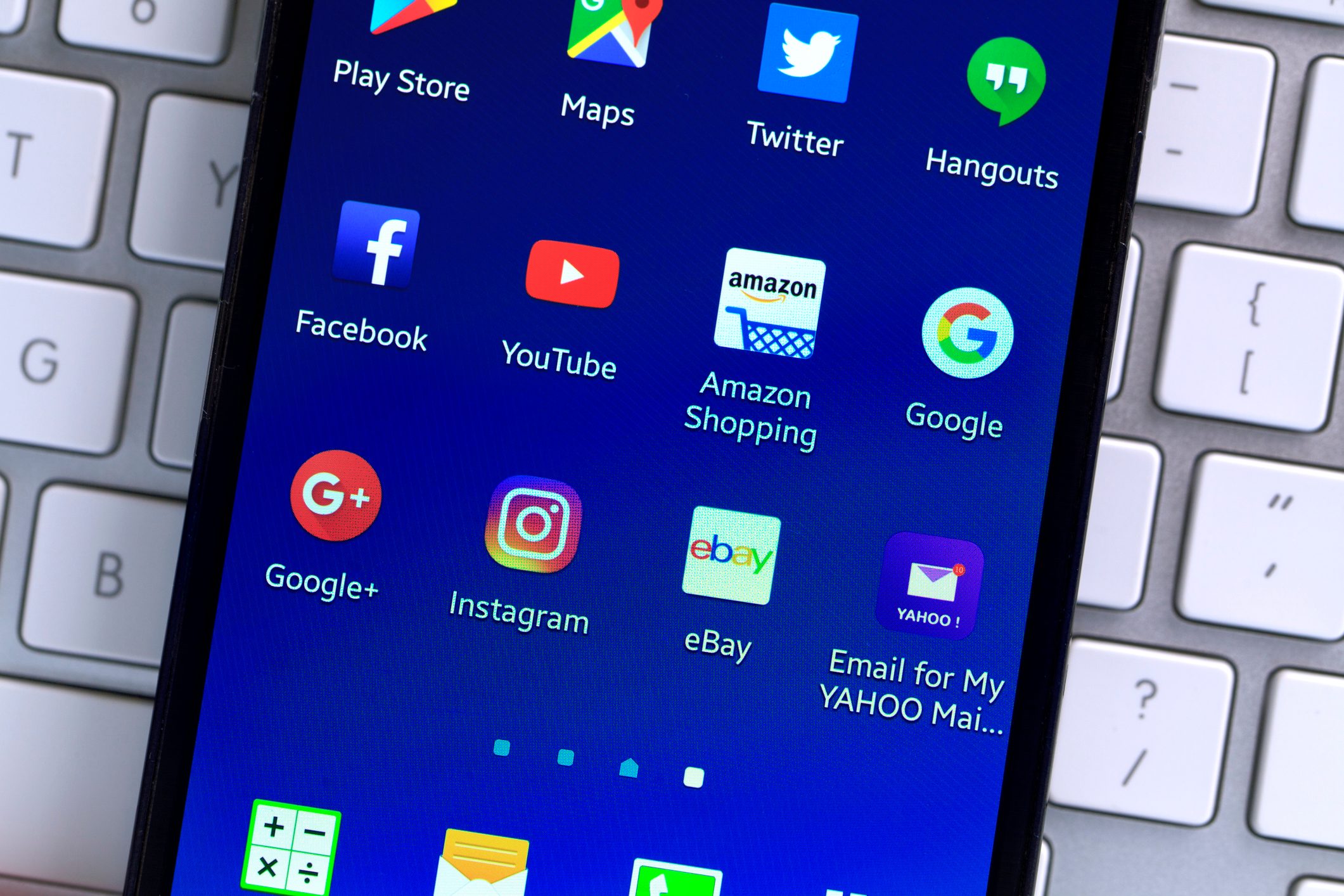 The Samsung Galaxy lets you create basically any GIF you want. The only thing you need is a Galaxy phone released in 2017 or later and the app Smart Select. To create a GIF, open a video in the YouTube app, then access Smart Select and swipe in from the right to display the Air Command Menu. Tap on GIF Animation, arrange the frame box to capture the image you want, start playing the video, and tap record. Click Stop to download the GIF into your Gallery. Try this trick to retrieve deleted text messages on your Android. 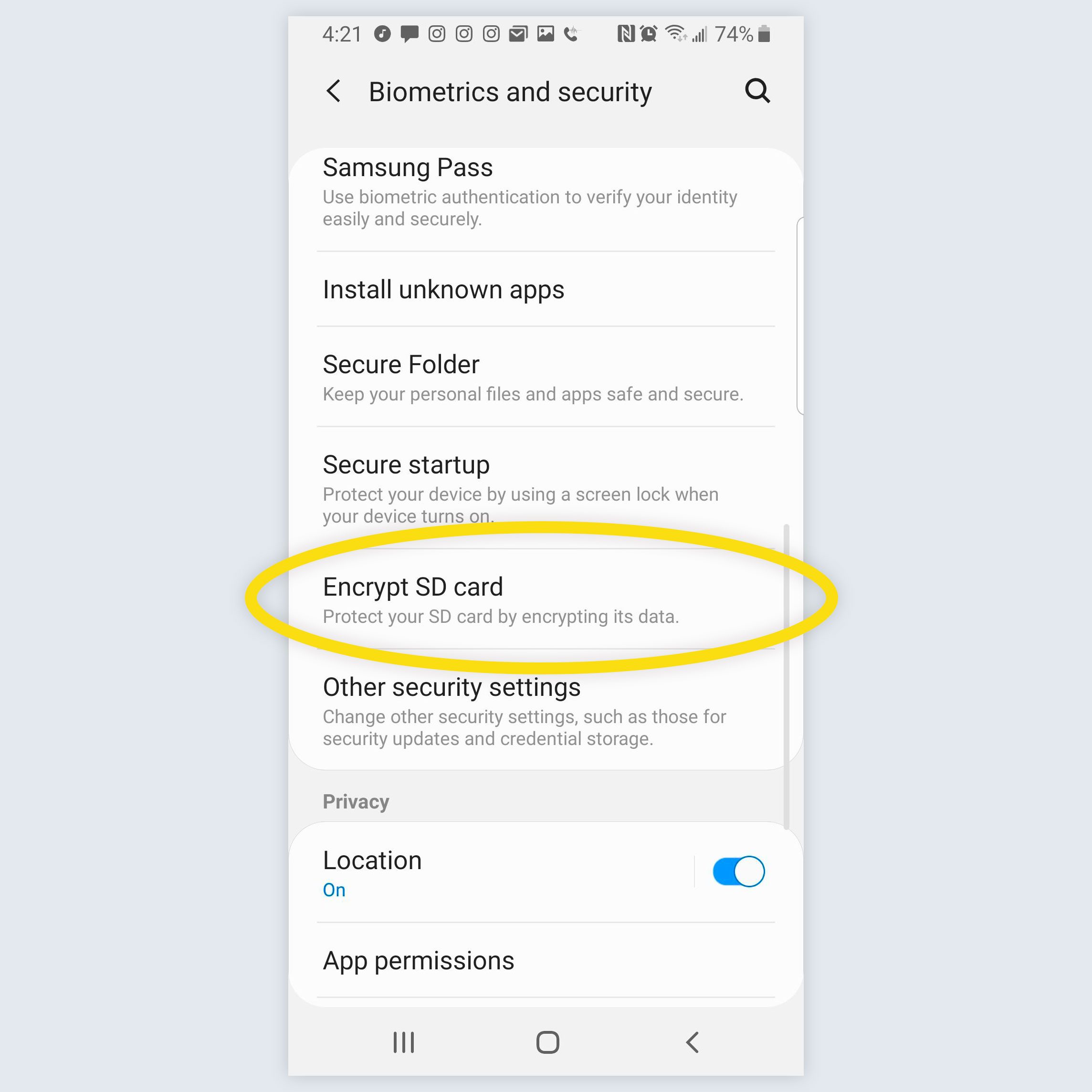 You can also encrypt your SD storage from your own phone. This helps you add an extra layer of security to your device by protecting against hackers and data thieves. Go to Settings > Biometrics and security > Encrypt SD card and click Encrypt SD card again after reading the disclaimer. “The process may take a while, but your information will be much safer for it,” says Theodorou. “Keep in mind that this will encrypt all of your existing data, and everything henceforth. Only a factory reset will undo the encryption, so make sure you regularly backup your phone.” These are the smartphone repairs you should never pay someone to fix. 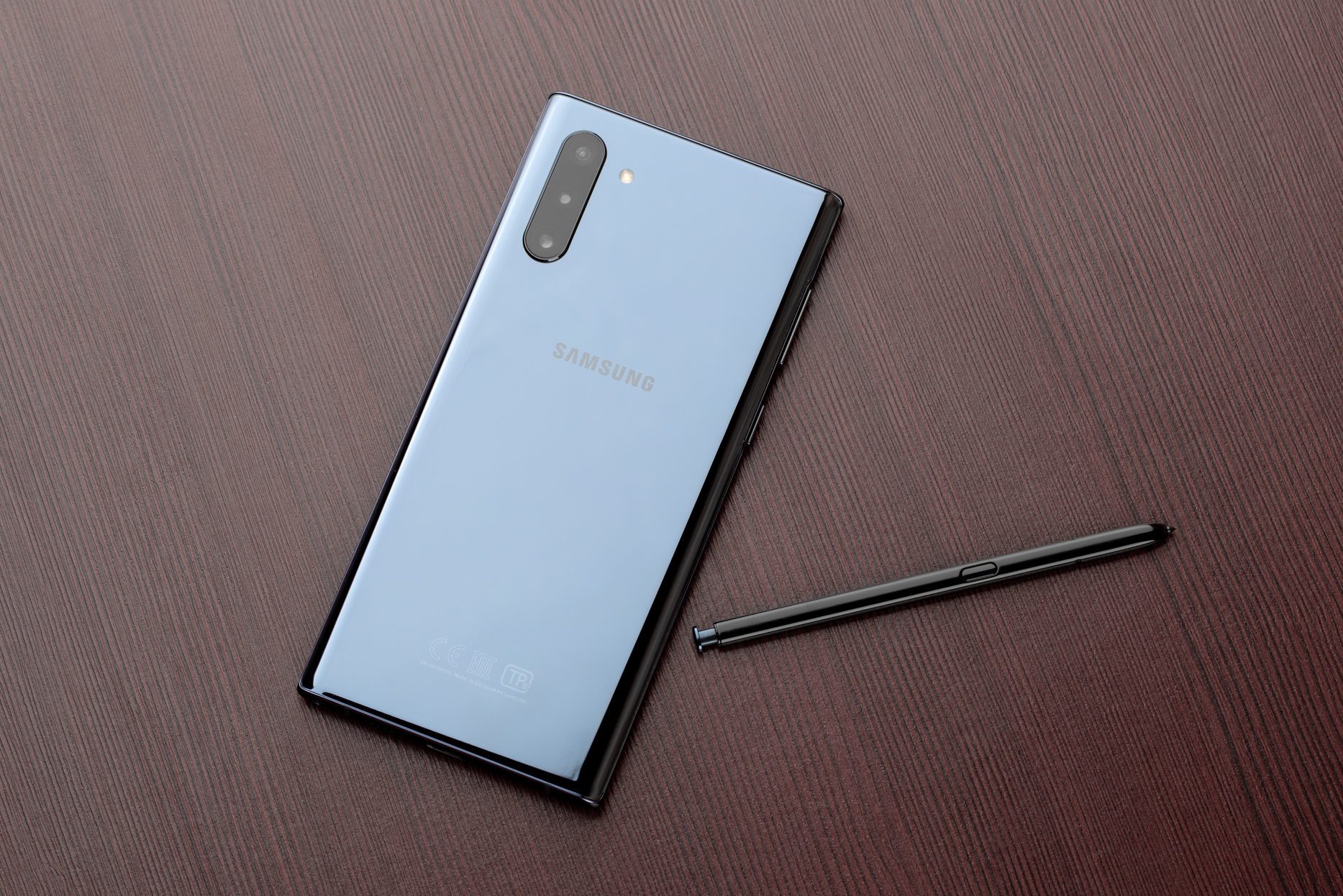 Take notes on a locked screen

With the Samsung Galaxy Note, you can write and save notes on your phone without having to unlock it. Use the stylus to tap the screen while holding the top button and then start writing away. “To check whether the screen off memo function is active, go to Settings > Advanced features > S Pen and make sure that the Screen off memo option is on. Because this technology relies on the stylus, this won’t work with the Galaxy S series,” says Theodorou. Check out these hidden smartphone codes you should start using. 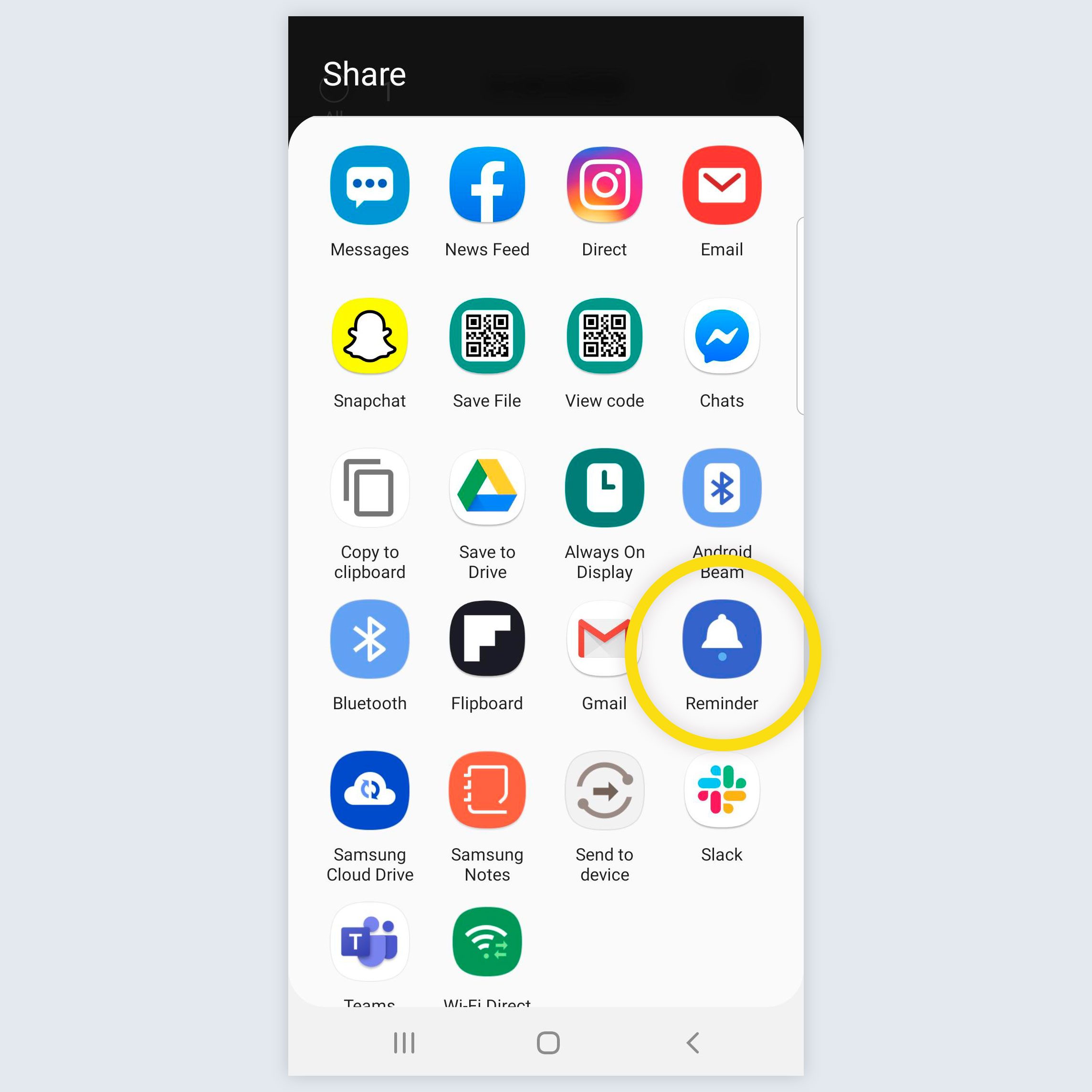 Turn messages and websites into reminders

Instead of manually typing in all of your reminders in the Reminders app, the Samsung Galaxy has a shortcut. If you want to set a reminder about a specific site, navigate to the three dots on the top right of the browser window, click Share, and then Reminder. If you want to save a text message as a reminder—maybe a mailing address or email address that you’re going to need later on—press on the thread you want to save, click Message Options, and then Send to Reminder. Try out these secrets to get a better smartphone battery life. 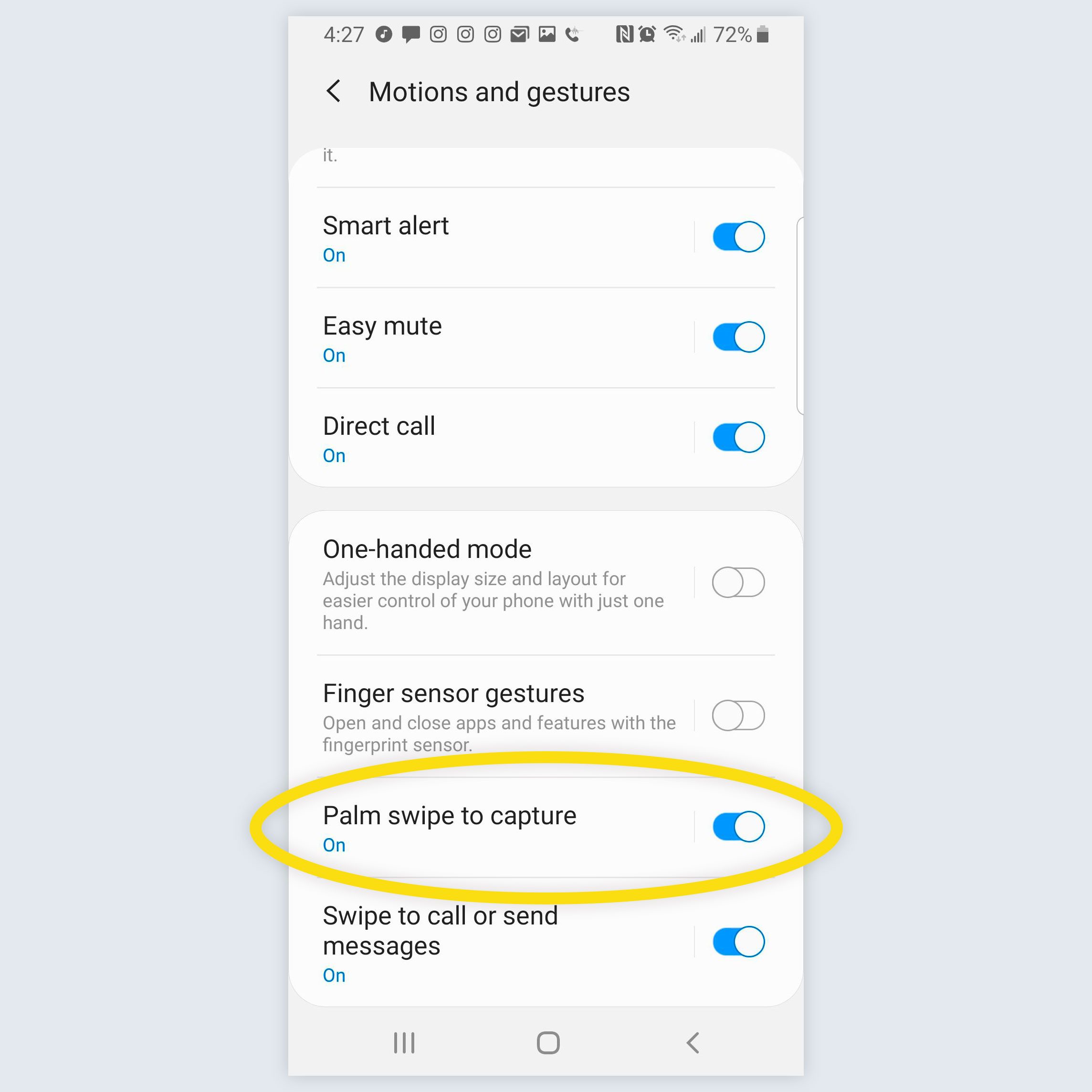 This unique feature works on the S10 and 20 Galaxy phones, says Prakash. First, you need to go to the motion menu setting and enable palm swipe. Then, when you want to take a screenshot simply swipe your palm across the screen. Did you know that your smartphone already knows these creepy things about you? 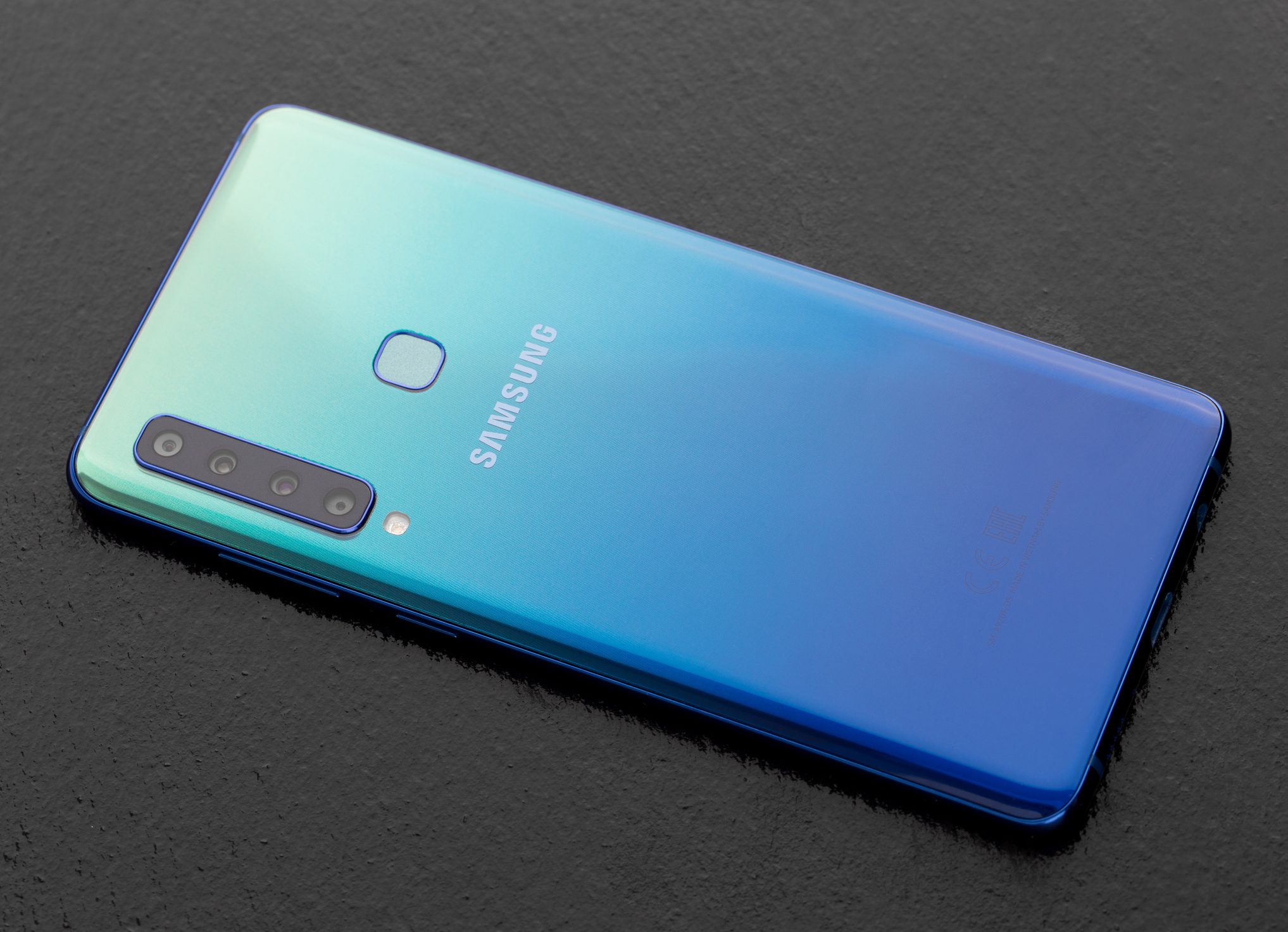 Another feature that the Samsung Galaxy has that iPhones don’t is the ability to use two apps at once on a split-screen, says Liz Hamilton, Director, People and Customers at Mobile Klinik, Canada’s top mobile phone repair business. To use, tap and hold the Recents button on the navigation bar, scroll to the app you want to see on half the screen and tap the round app icon above the window, then choose Open in split-screen view. The app will pin to the top of the screen and then you can pick the other app you want to show on the screen. “This feature can be extremely useful for numerous instances, if you ever need to send contact information to someone, you can have both your contact and messenger applications open at the same time, making it much easier to complete your task,” says Hamilton. “This feature is also handy for various work purposes. Instead of continuously jumping from tab to tab, having them both open can save you plenty of time.” 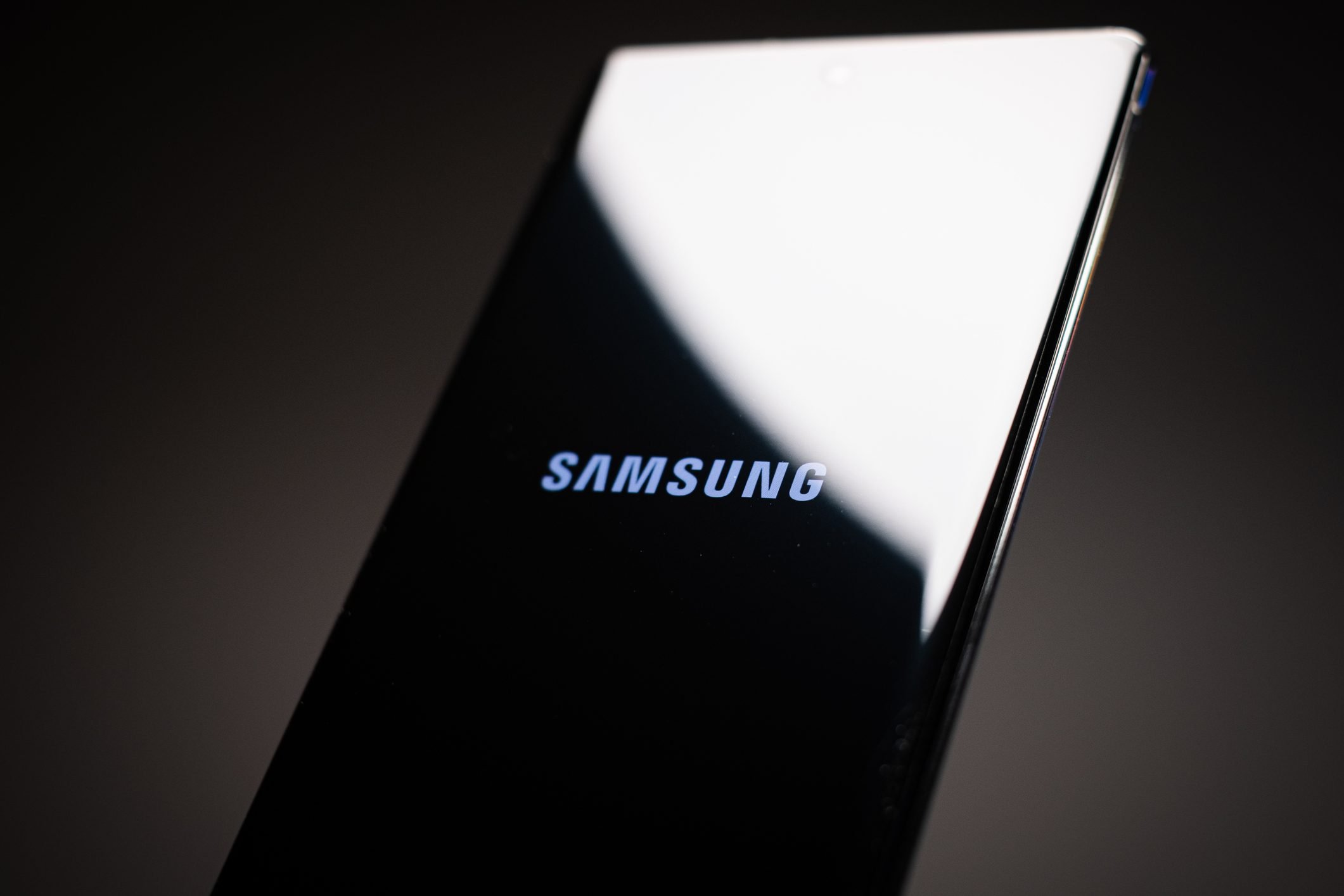 The app prediction feature uses artificial intelligence to understand your usage patterns on your Samsung Galaxy. “This makes running the apps and switching between them a breeze,” says Prakash. “This also ensures peak performance and saves quite a bit of time.” You don’t need to worry about enabling this feature on your phone, AI does it for you. Learn about these hidden Android hacks you never knew about.

Adjust your audio to the perfect volume

This unique feature is perfect for headphone users. To set the perfect volume, go to Settings > Sounds and vibrations > Advanced Sound Settings > Sound quality and effects > Equalizer. Play around with and adjust the different sound options that the phone offers to find your perfect balance. Once you save the changes, the Samsung Galaxy remembers the settings and will use them whenever it emits sound. If your phone is lagging, try these easy ways to speed up your cell phone. 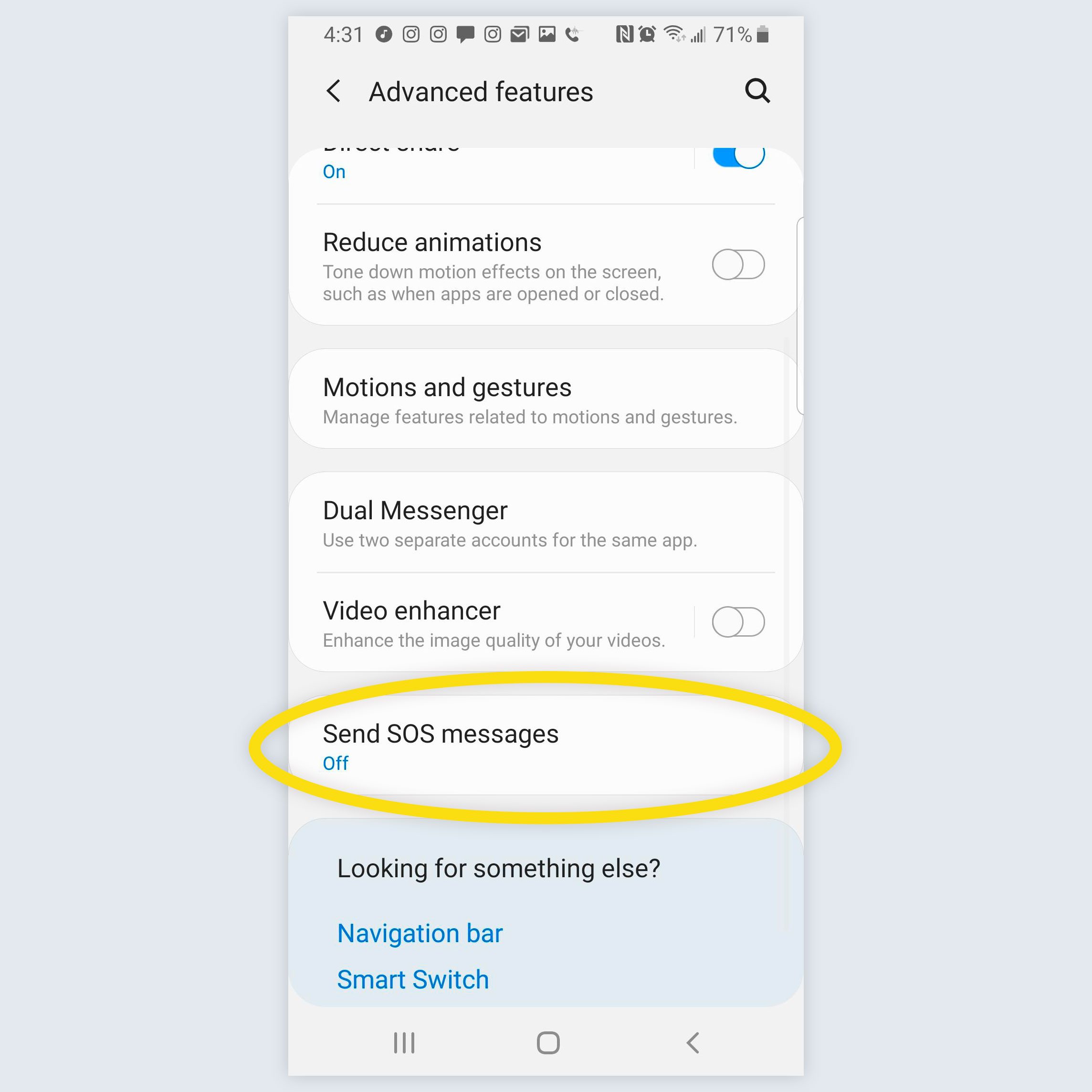 This feature is super easy to set up and can end up saving your life. To enable, just click the power button three times and a text message will be sent out to four different emergency contacts. The emergency messages don’t have to just be a text message; you can also add a picture or send a five-second voice recording with the picture. To set it up, go to Settings>Advanced Features>SOS Messages and fill in your emergency contacts. To keep your security air-tight, never do these things on public Wi-Fi.