Grab a tissue! You can't help but get all the feels when you read these stories of veterans who were reunited with their canine comrades. 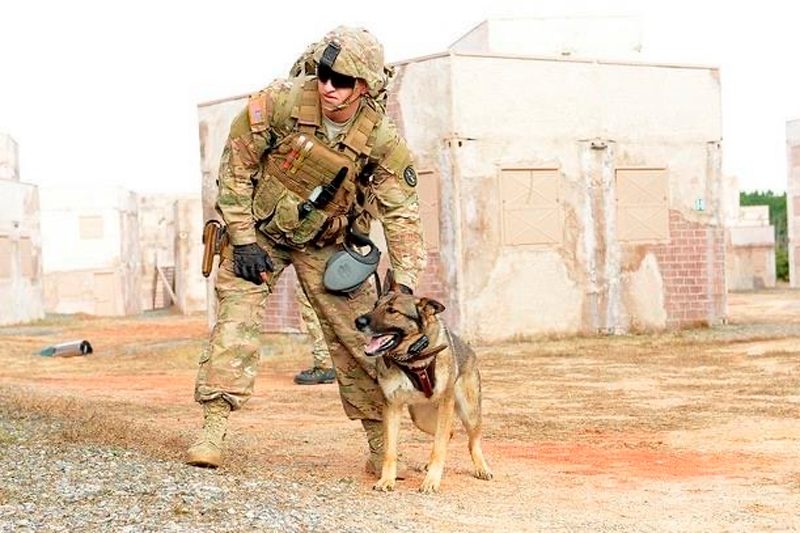 Best friends till the end

Veterans Day allows us to pause and express our sincere gratitude for the dedication and sacrifice of those who have served our country. These brave men and women risked everything to serve and protect, and some of them did so with the help of an unlikely best friend—a highly trained and skilled military dog. Some veterans, known as handlers, served alongside Military Working Dogs (MWDs), and together, these duos worked side-by-side, sniffing out explosives. Often, handlers forge unbreakable bonds with their MWDs. But what happens to the pair when their service ends? These are the touching stories of the veterans who reconnected with their service dogs and gave them forever homes with the help of Mission K9 Rescue. After you read these sweet stories, take a look at these heroic cats who also served in the military. 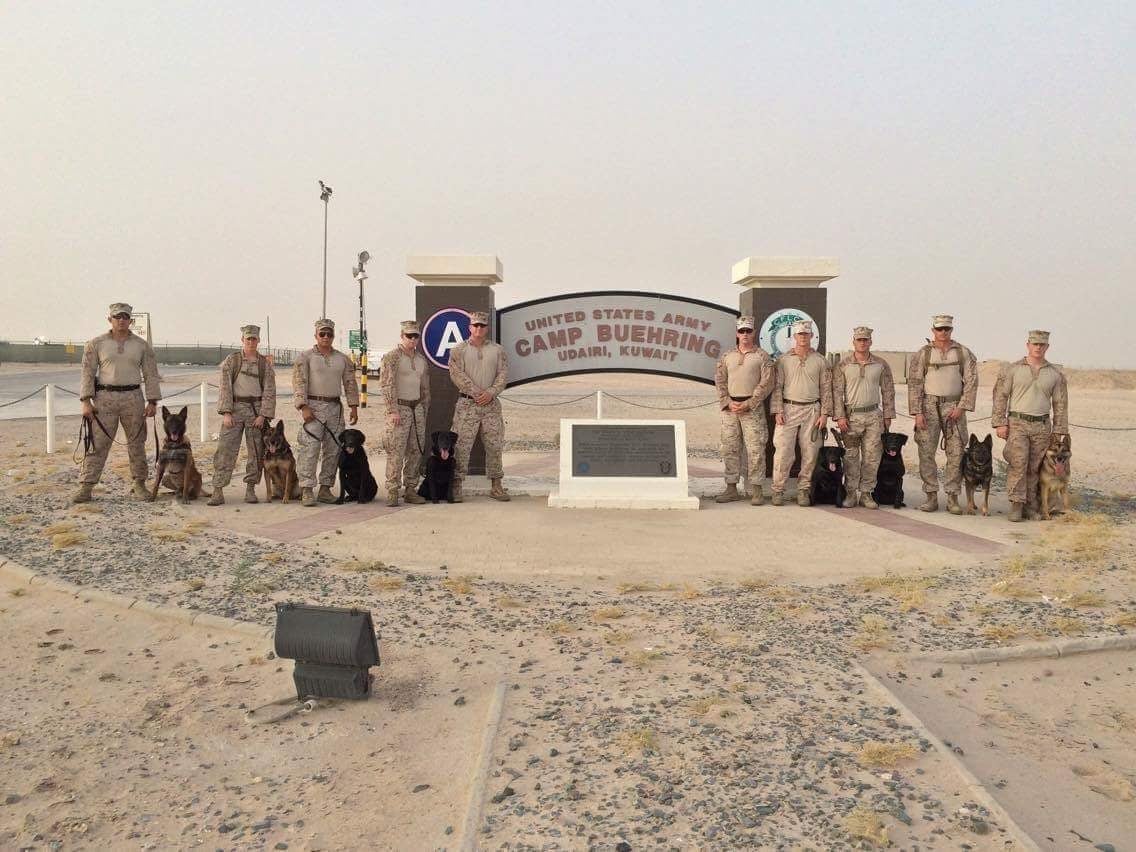 When a dog retires from military service, it becomes a civilian and needs a forever home. That’s where Mission K9 Rescue, a nonprofit based in Houston, comes in. The group rescues working dogs who served in the military, as well as other dogs who worked for the police force or for civilian contractors. Their goal is to reunite these dogs with their handlers, if possible; if there isn’t a designated handler, Mission K9 works to find them another loving home.

The process isn’t always cut and dry. Often, the dogs are flown to the States from overseas. Sometimes they need to decompress from post-traumatic stress or get medical treatment at the Mission K9 Rescue facility before they’re ready to be reunited with their military handler or adopted by another qualified individual. But all the efforts are worth it because these beautiful dogs deserve to live out their golden years with lots of love, snuggles, and adoration for their loyal and devoted service to humankind. 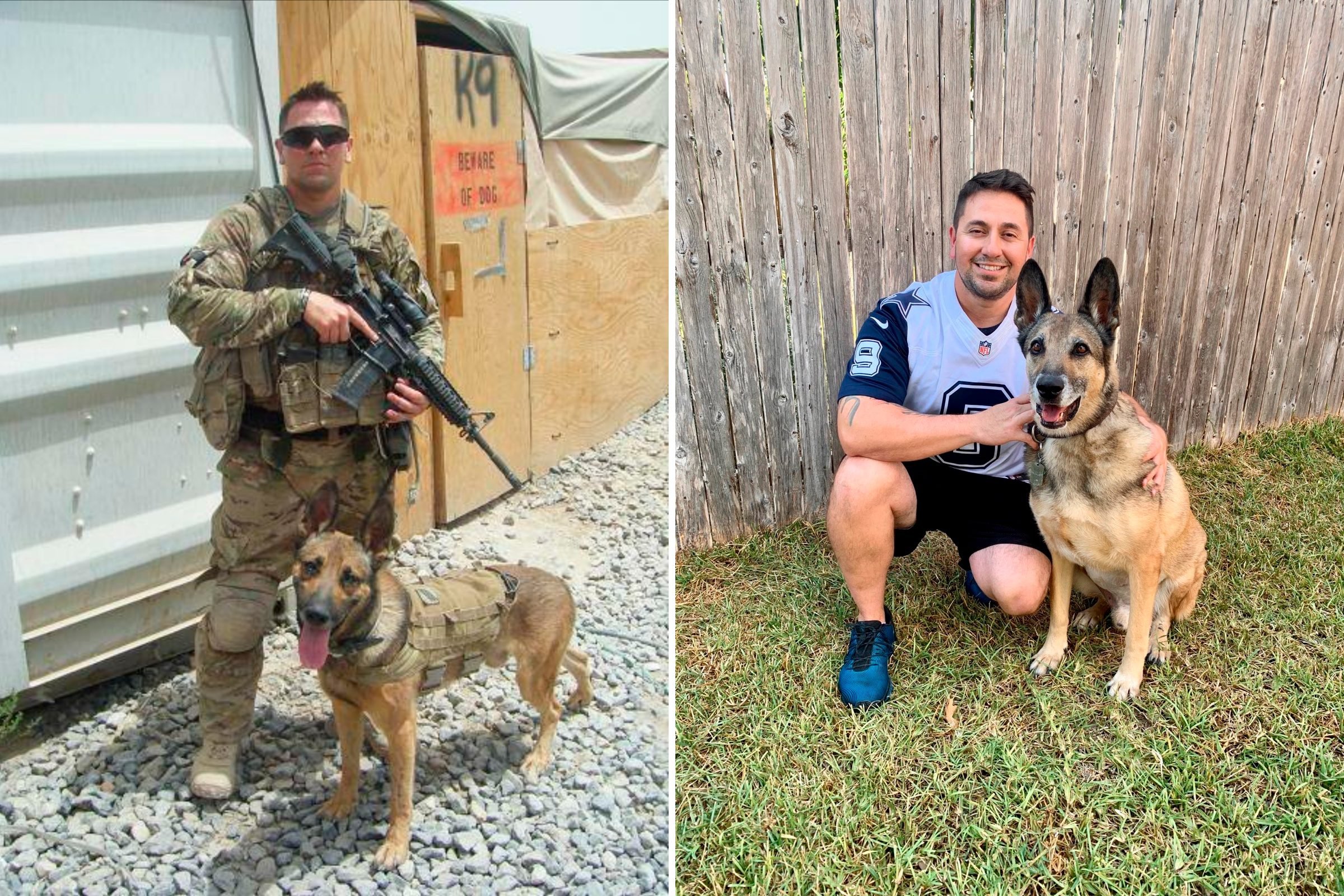 Reunited, and it feels so good! Navy Chief Petty Officer Fabian Salazar and MWD Max, a Belgian Malinois, waited three years after they parted to be together again. Salazar’s affinity for Max grew every day as they served together in Afghanistan and stateside. But it was a close call during a routine mission that sealed their bond forever. If Max hadn’t alerted Salazar of impending danger, Salazar says he wouldn’t have made it home. “Our lives would look a whole lot different today without Max, and we thank God every day for him,” Salazar says.

But a comfortable home life didn’t come right away. Max and Salazar were separated for a few years when Salazar was reassigned and Max was still needed for other missions. Salazar kept in close contact with Max’s new handlers during their separation, and when he was alerted of Max’s impending retirement, he didn’t miss a beat and immediately applied to adopt Max. But since Salazar was still on active duty, Mission K9 Rescue gave Max a temporary home at their ranch until Salazar could take him home. “He got his first taste of retired life with a yard just to be a dog in and loving hands that didn’t expect anything from him. They just wanted him to be healthy and happy,” Salazar says of Mission K9 Rescue. Find out how other service dogs have saved veterans in a different way. 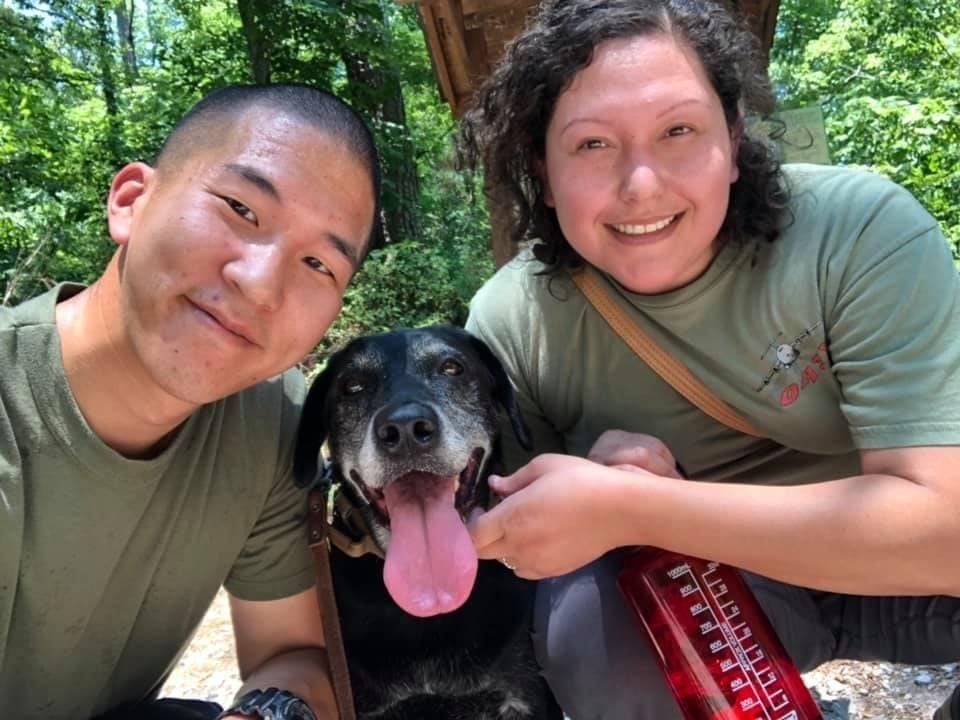 When Marine Byung Kang (aka BK) makes a promise, he keeps it. This time, that promise was made to his bomb-sniffing MWD, Blue. “We built an indescribable bond,” he says. “Blue was amazing at the job, finding explosives and saving everybody countless times.” BK wanted to show his immense gratitude and repay Blue for her service and companionship. So he made a vow to adopt her and give her a loving home after she retired from military service.

When the time came, money was tight, and he had no idea how he would come up with the funds needed to get Blue from Okinawa, Japan, to his home in Atlanta, Georgia. But a promise is a promise. That’s when Mission K9 Rescue stepped in and flew Blue from Japan to their facility in Texas and finally to her forever home with BK and his wife, Wendy. As BK says, “Yes, Blue is a dog, but you never leave a Marine behind.” Don’t miss these heartwarming photos of soldiers and their service dogs. 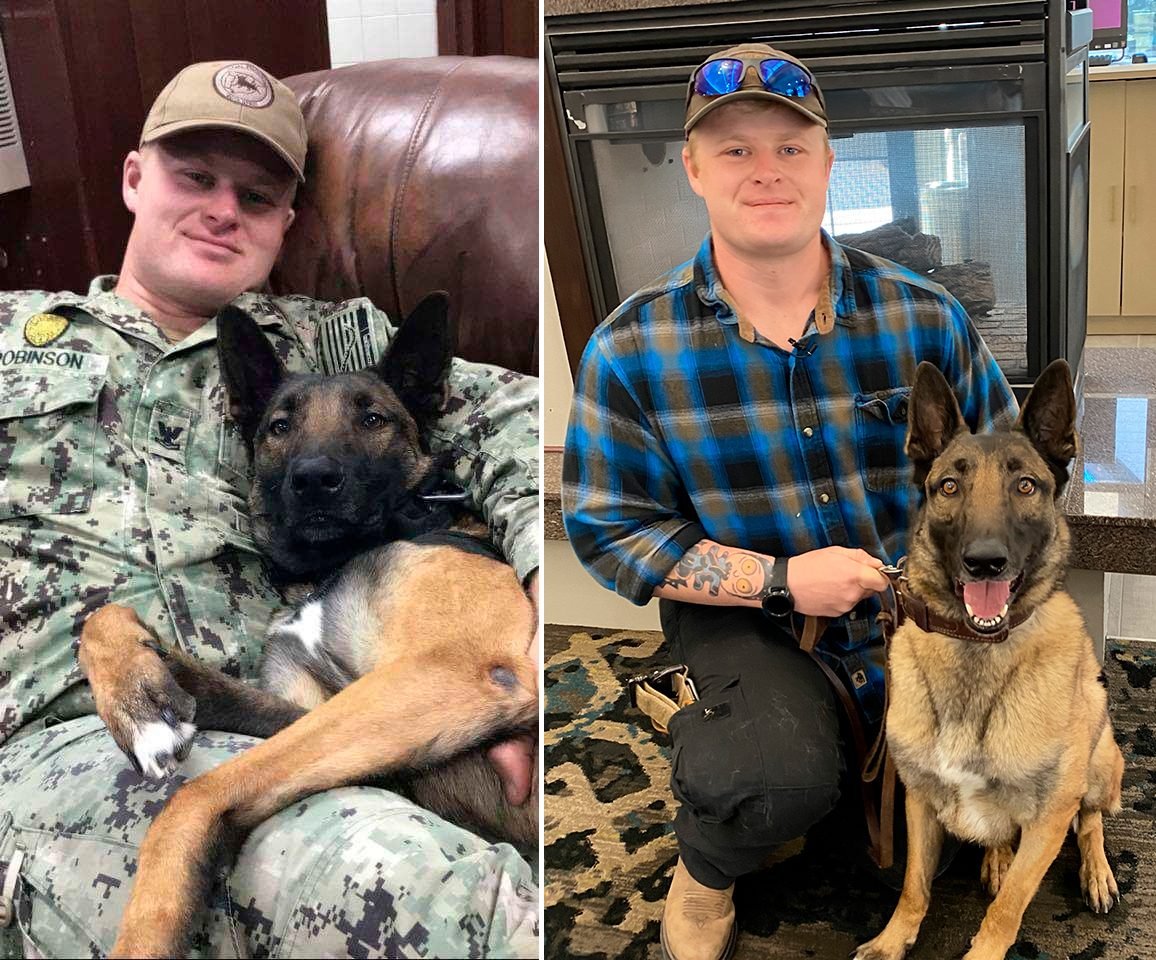 Vvito was one of those coworkers everyone secretly envies—loyal, compassionate, smart, and an absolute goofball. At least that’s how U.S. Navy Canine Handler MA2 Jessie Robinson describes his MWD, Vvito, a Belgian Malinois who worked as an explosive detection dog. “Working with him was amazing,” says Robinson. “The bond we built became pretty strong during our time in Rota, Spain.” That unbreakable bond didn’t come from playing fetch or taking long walks in the woods. Vvito and Robinson spent their workdays patrolling the base and searching for explosives. “At the end of the workday, we would usually have Vvito roaming around in the office just because everyone enjoyed his company,” Robinson says.

When Robinson found out that Vvito was up for adoption, he didn’t hesitate: “I immediately started making plans and adjustments in my life to ensure I could adopt him.” Mission K9 paid $3,000 to bring Vvito from Spain to their Houston facility. “They drove him all the way from Texas to Nebraska, where I currently reside,” Robinson tells Reader’s Digest. “It means the world to Vvito and me that they made this possible for us to reunite.” 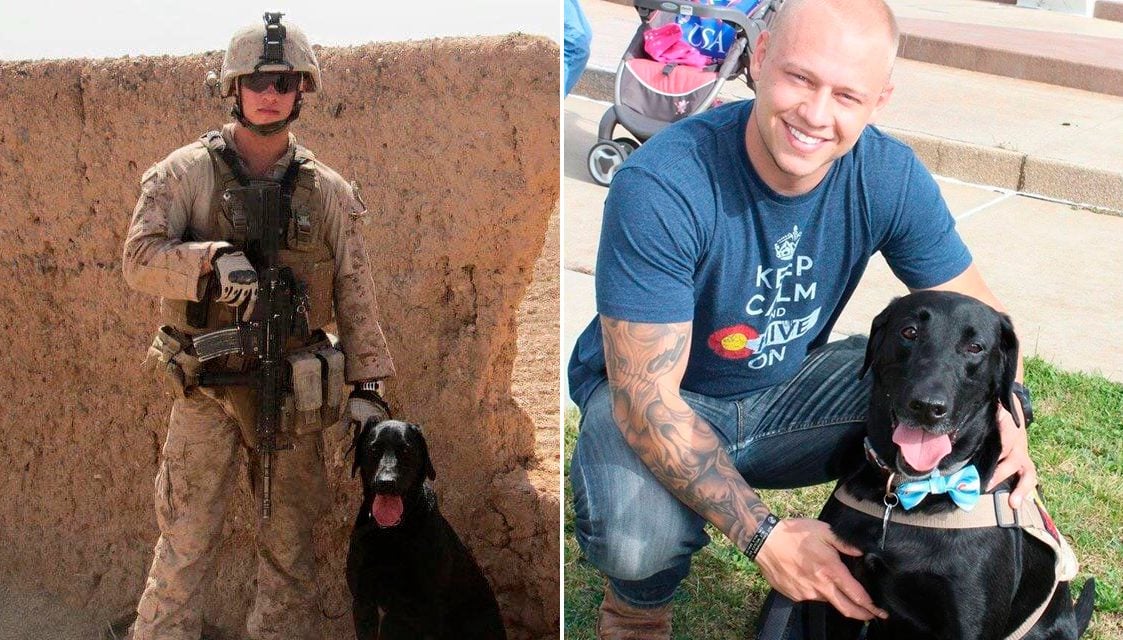 Marine Corps veteran Matt Foster knew Mick was one of a kind from day one. “Mick has been my best friend from the day I met him, and we have a relationship that not many would understand,” says Foster. Matt and MWD Mick, a black Lab and bomb detection dog, were joined at the hip for eight months during Matt’s service in Afghanistan. “We got to experience life together in service, as well as in the outside world.” Mick saved the lives of Matt and fellow soldiers time and time again.

When Foster and Mick were separated due to deployment, it left a gaping hole in Foster’s life. “Something always just felt missing,” he explains. “I thought I would never see him again.” But when Foster found out Mick was retiring and looking for a home to retire in, he jumped at the chance to adopt and spoil him forever. “Mission K9 Rescue brought Mick back to me when I thought all hope was lost. They gave me my best friend and companion back at the hardest time of both our lives,” says Foster, referring to the transition back to civilian life. “We have truly been through it all, and no dog will ever be as dear to me as Mick.” Here are more brave dogs that have earned hero status throughout history. 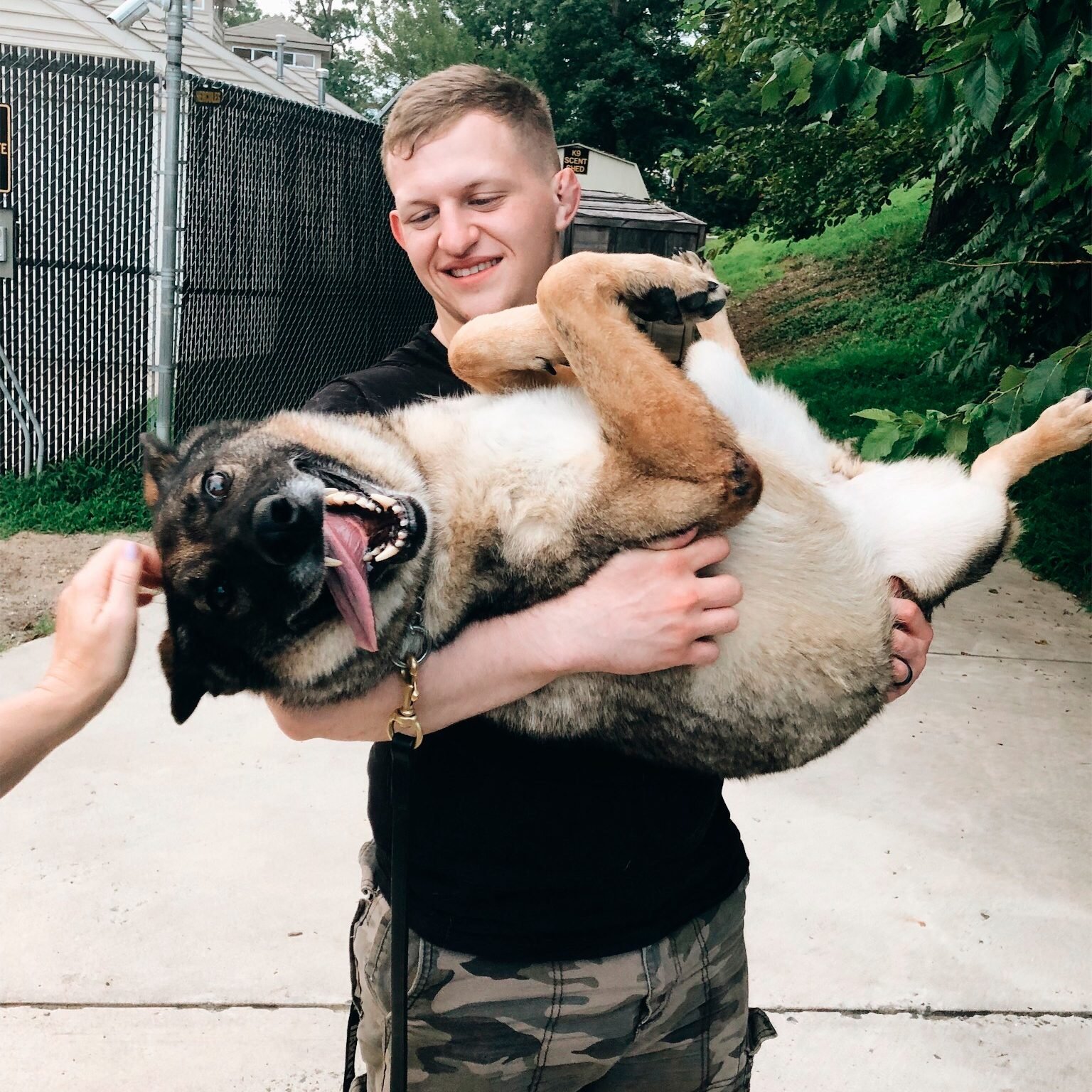 Iskra must think she’s one of the dainty toy breeds people carry in stylish totes, since her size doesn’t prevent Army Sgt. Jake Ferkin to scoop her up for a cuddle. MWD Iskra and Ferkin served as an explosive detection team for two years and traveled to New York, Jerusalem, and Sicily. “The number one reason that I wanted to get her home with me was to pay her back for all the time she spent taking care of me,” Ferkin says. “She always gave me her best and always protected me.”

He was chomping at the bit to reunite with Iskra when she retired, but the Army had a travel ban due to the pandemic, making it impossible for Ferkin to get her. So he contacted Mission K9 Rescue, and they drove her the 1,600 miles from Virginia to Texas. “I don’t know what I would have done without their help and could not be more grateful for them,” Ferkin says. “Now Iskra is enjoying her retirement and taking her place on Fort Couch.” 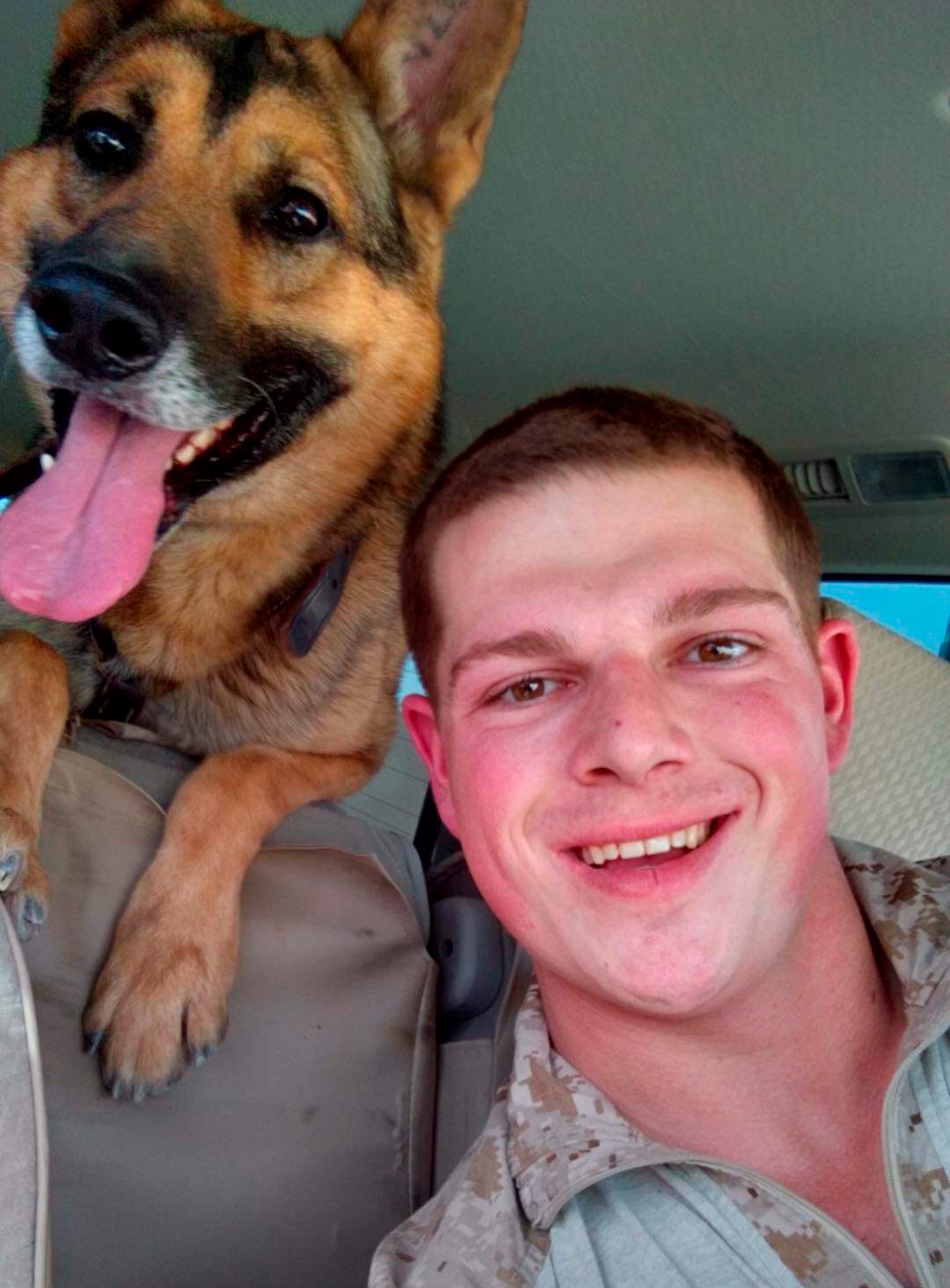 This is hands down the cutest picture you’ll see today. You can’t help but smile when you look at these deliriously happy faces. And you might be surprised to hear that MWD Enzo, a German Shepherd, was separated from his Marine handler Joe Stasio for three years since he not only clearly remembered Joe but was also thrilled to see him. “He knew exactly who I was years later and still showed his true love and loyalty for me,” says Stasio of Enzo, an explosive detection dog. The two were inseparable while serving in Kuwait and then stateside. “You develop a bond that is way stronger than a typical house dog. You work together, sleep together, and get through it all together.”

When Statsio learned Enzo would be available for adoption, he was honored to provide Enzo the comfortable retirement he deserved. “Not a lot of people think about these dogs once they retire, but they worked their whole lives,” says Stasio. “[They] didn’t get to enjoy the simple things a normal dog would, like sleeping on the couch, eating better food, and being around people all the time.” Since Stasio had a grueling work schedule and limited finances, Mission K9 Rescue stepped in and flew Enzo from Camp LeJeune, North Carolina, to his new home with Stasio in Buffalo, New York, free of charge. “Getting Enzo back means the world to me. It has truly been a blessing to reconnect with him, and I feel as though we didn’t skip a beat.”

Sadly, at the time this story was being written, Enzo passed away. We extend our deepest sympathy to Joe and our sincere gratitude for Enzo’s heroic service to our country and his companionship to Joe. In honor of Enzo and these other amazing canine heroes, read the story of the very first war dog platoon.