It might be hard to believe, but the McDonald's Happy Meal is 40 years old in 2019! And while the food is certainly tasty, the main attraction when it comes to Happy Meals is often the toys. Take a look at these real ads that show how the Happy Meal's toy offerings have changed throughout its run. 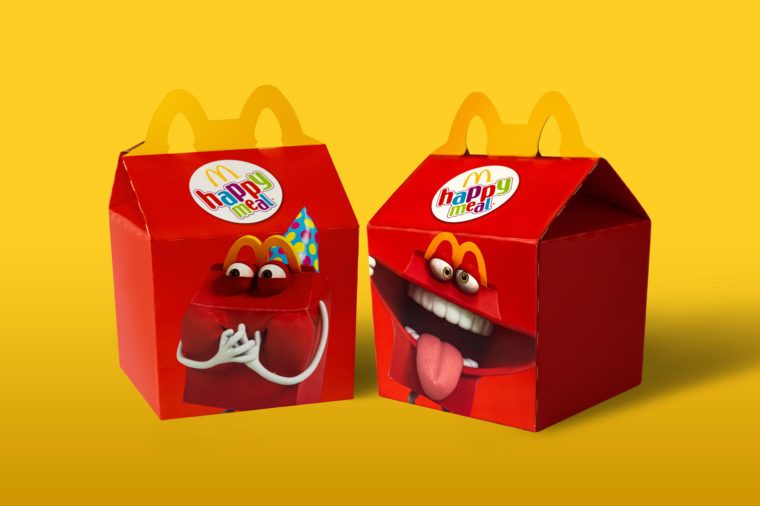 Happy Meals through the years

The Happy Meal first debuted at American McDonald’s in 1979. The brilliant idea to include a popular toy with these kids’ meals was a success, to say the least—believe it or not, McDonald’s is the largest toy distributor in the world. And the Happy Meal, with its smiley box, kid-sized food portions, and (of course) included toy, is the fourth most popular item on the McDonald’s menu. (Curious what’s ahead of it? Here’s the answer.) And it’s also 40 years old, as of 2019! Take a stroll down McMemory Lane with these ads advertising classic Happy Meal toys from the 1980s to the 2010s. 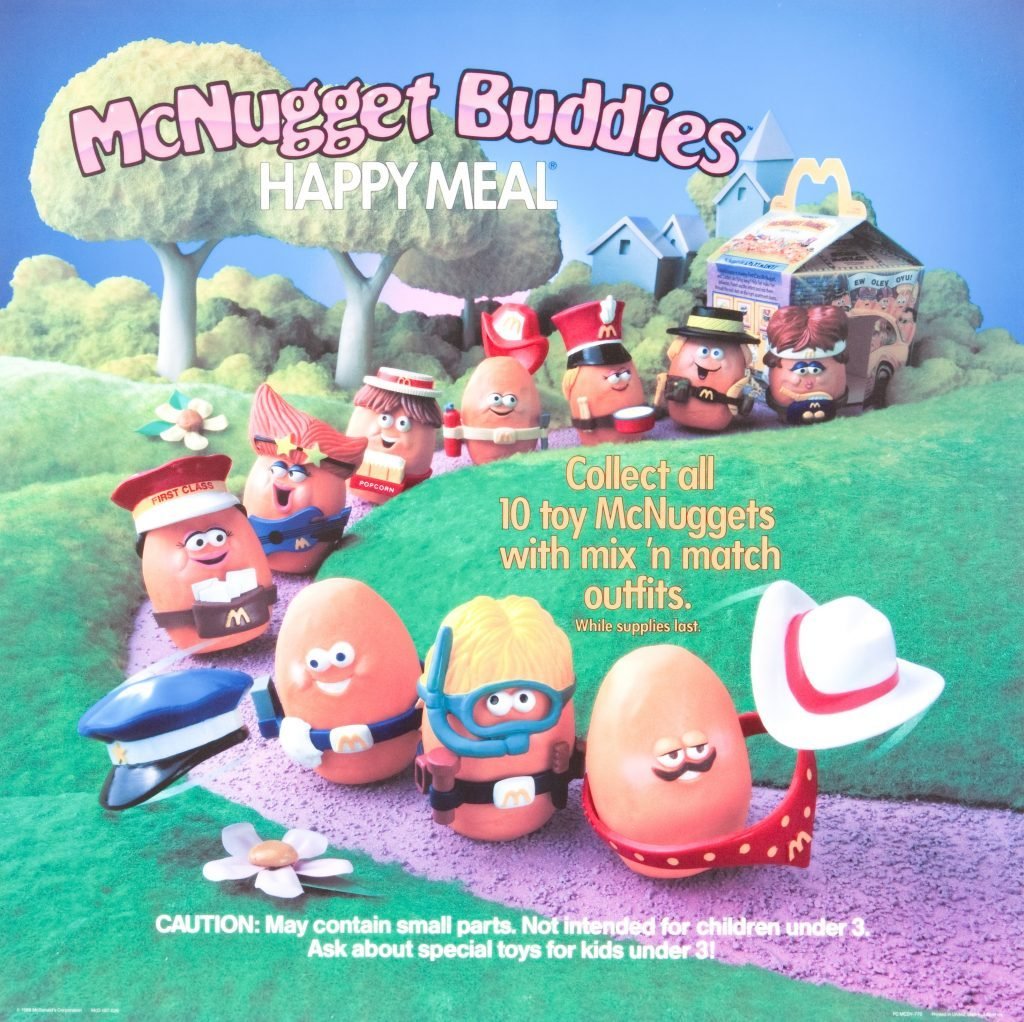 The edible McDonald’s Chicken McNuggets debuted in 1980 and became a Happy Meal option in 1984. Four years later, McDonald’s consumers got these mix-and-match, career-spanning toy versions. With a design reminiscent of Mr. Potato Head, McNugget Buddies had removable parts like hats and shoes. Some even came with peel-off stickers for some additional detail. Did you know these 12 other fun facts about McNuggets, too? 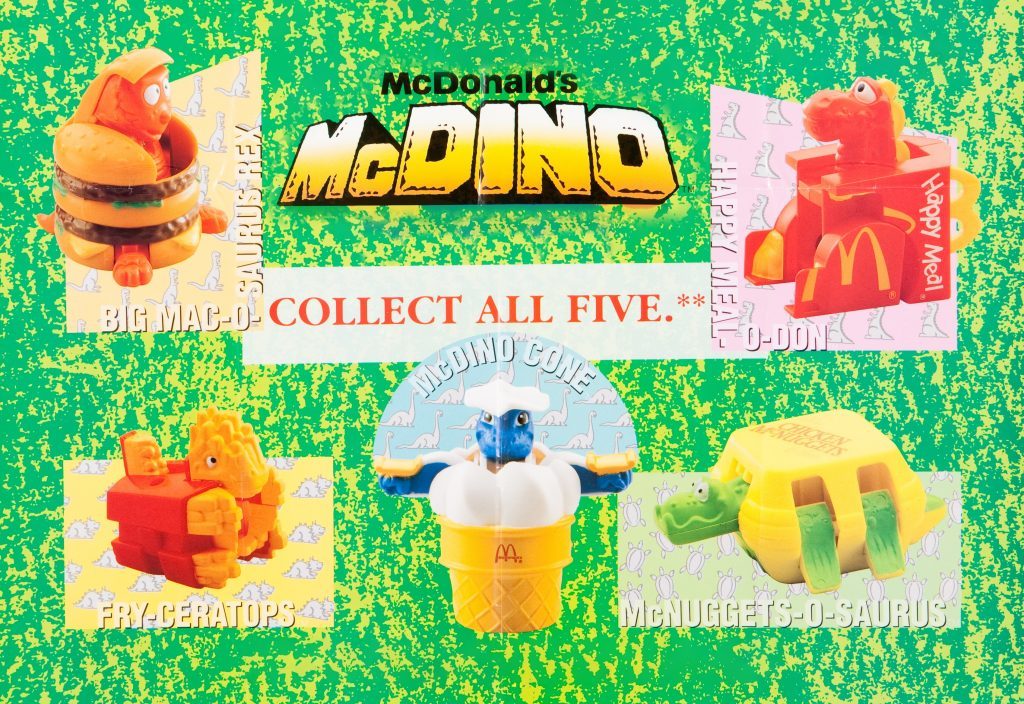 In what looks like a marriage of Jurassic Park and Transformers (even though Jurassic Park wouldn’t come out until 1993!), some late ’80s and early ’90s Happy Meals contained these McDino Changeables Happy Meal toys. They could be rearranged to look like cartoon dinos or McDonald’s food items, and went by names like “Big Mac-O-Saurus Rex,” “Happy Meal-O-Don,” and in a delightful use of punning, “Fry-Ceratops.” 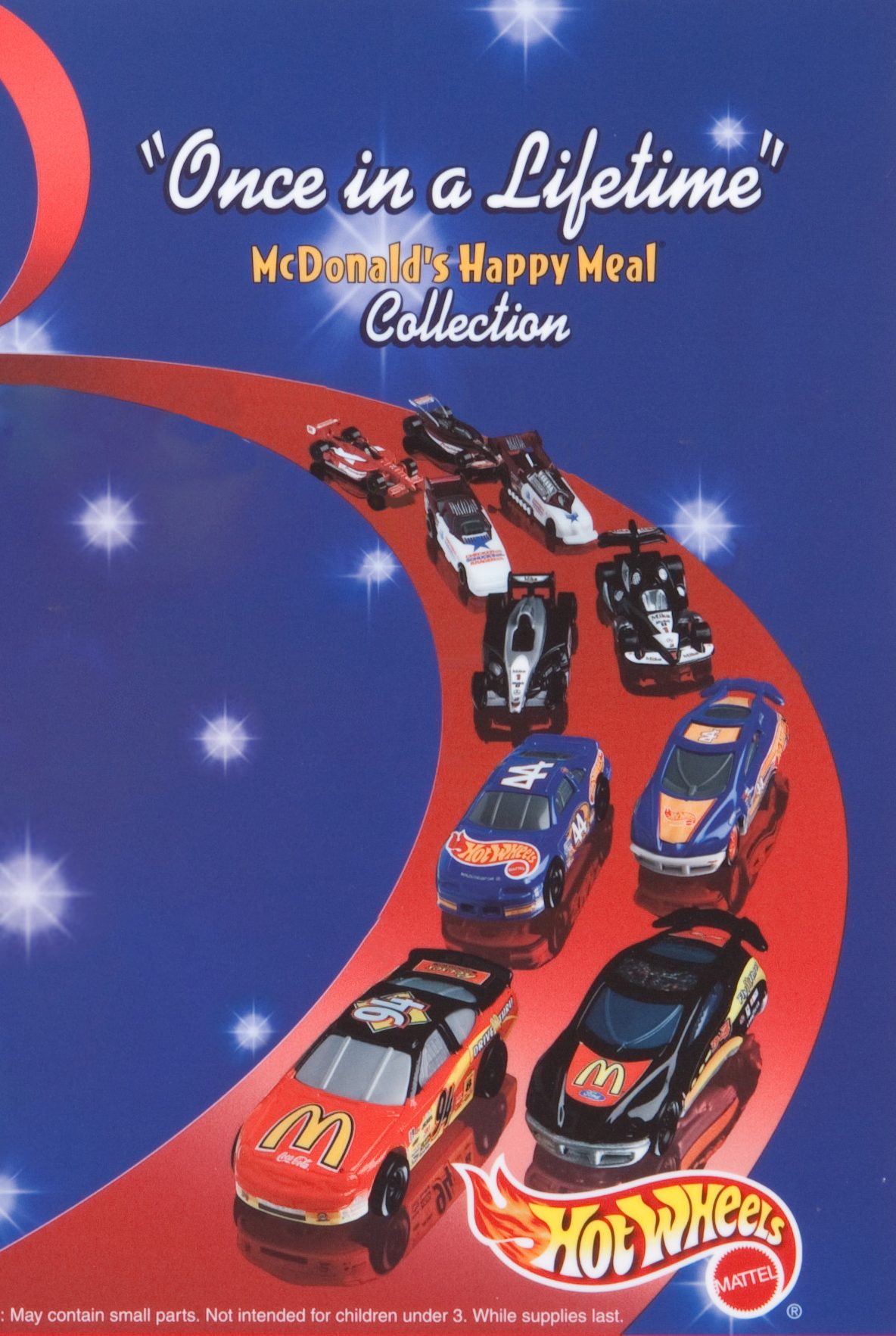 Hot Wheels made their Happy Meal debut in 1991 and also got this snazzy 1993 ad. The cars themselves debuted in 1968. Find out the real way McDonald’s makes money (it’s not their food)! 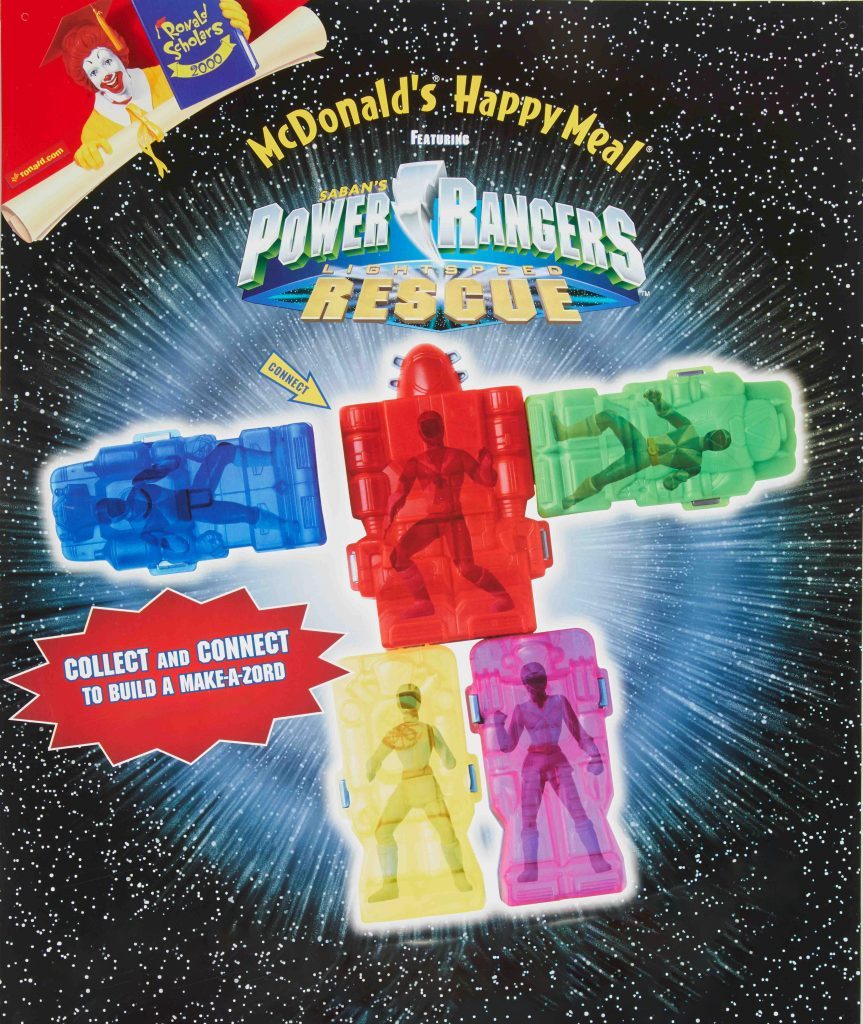 We’re not totally sure what’s going on in this Happy Meal ad—what is a “Make-a-Zord”? Why do the Power Rangers seem to be trapped?—but we’re sure that plenty of ’90s kids tried to get their parents to go to McDonald’s again and again so that they could, indeed, “collect them all.” 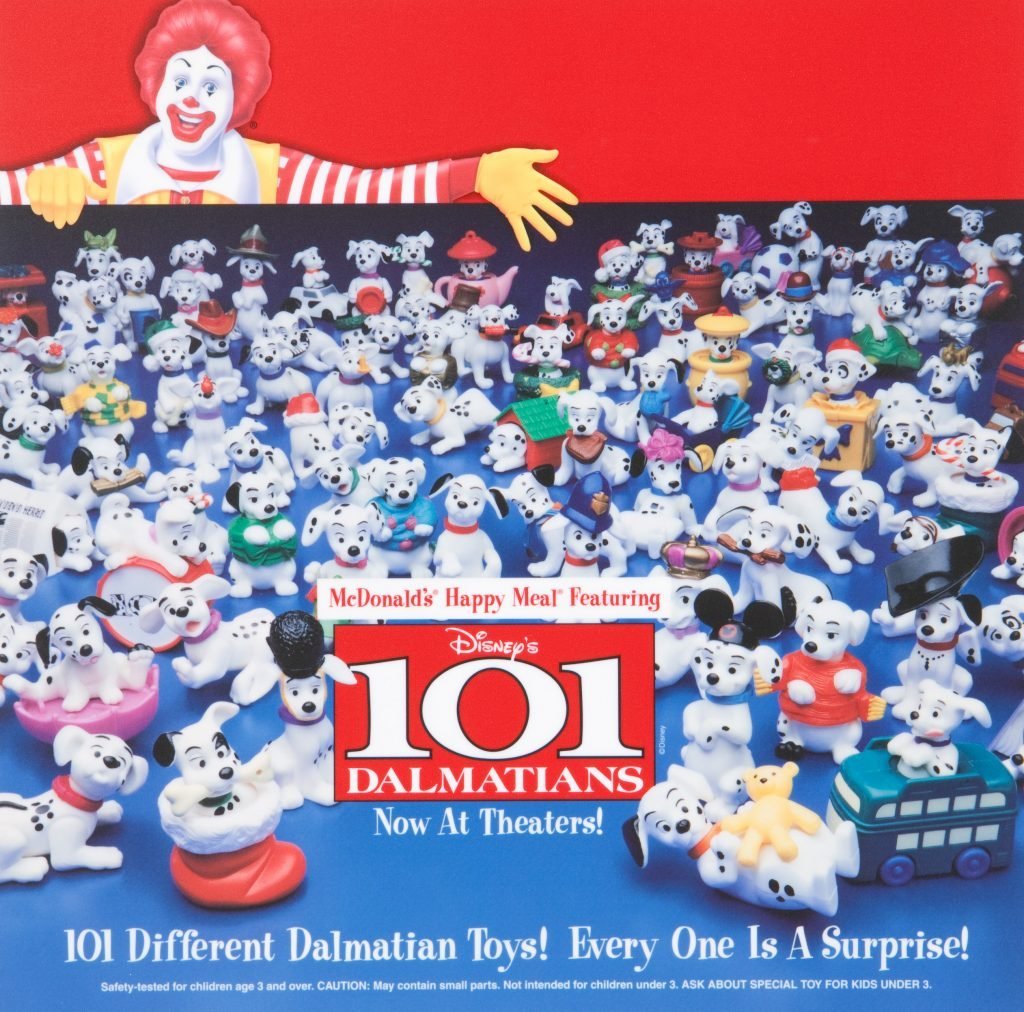 We know what you’re thinking: Did McDonald’s actually have 101 different Dalmatian figurines? They sure did, and the complete set is a major online collectible item. Though the Dalmatians are clearly the style of the doggos from the original animated movie, that movie came out back in 1961, long before the debut of the Happy Meal. This promotion was for the 1996 live-action film. While Happy Meals weren’t around in 1961, McDonald’s itself was. Get a look at what McDonald’s menu has looked like through the years. 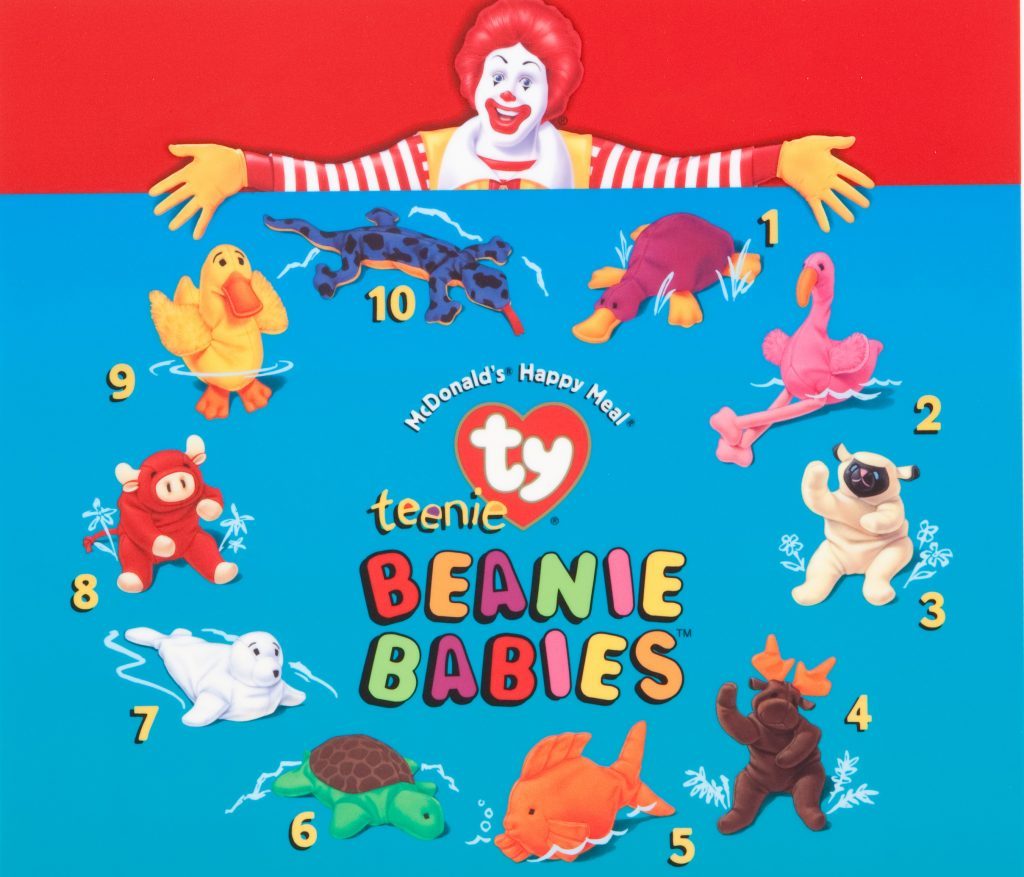 This one will take you right back. While major toy franchises like Hot Wheels and Power Rangers are still around today, classic ’90s Beanie Babies like these are all but extinct. All of these mini beanbag animals are adorable, but this ad’s #1, named Patti the Platypus, was one of the most popular Happy Meal toys of all time and is still a sought-after collector’s item. You know Beanie Babies were huge in the ’90s, but find out the most popular toy the year you were born. 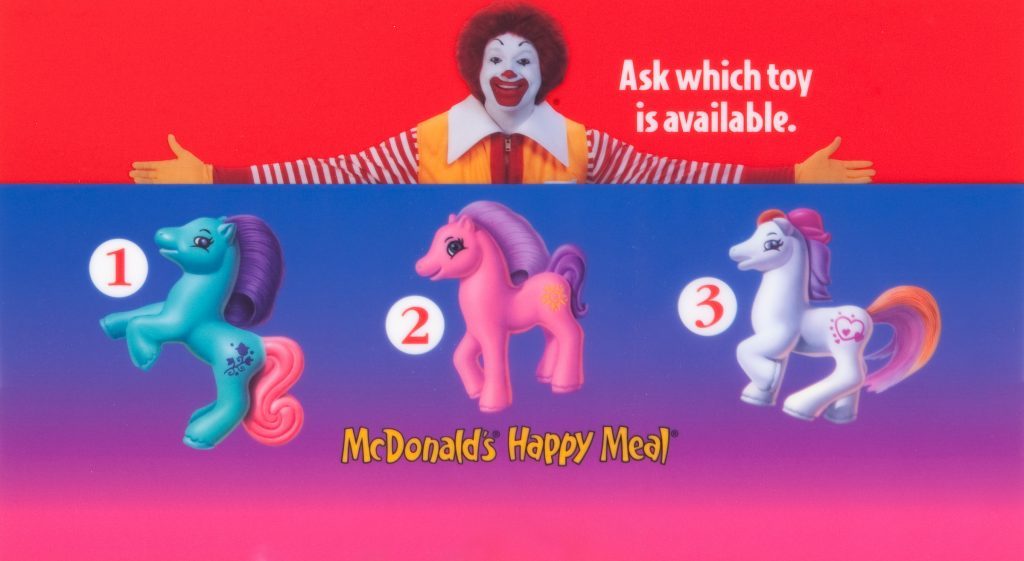 These pretty prancing ponies from the worldwide media franchise actually had “real”-feeling tail or mane hair. 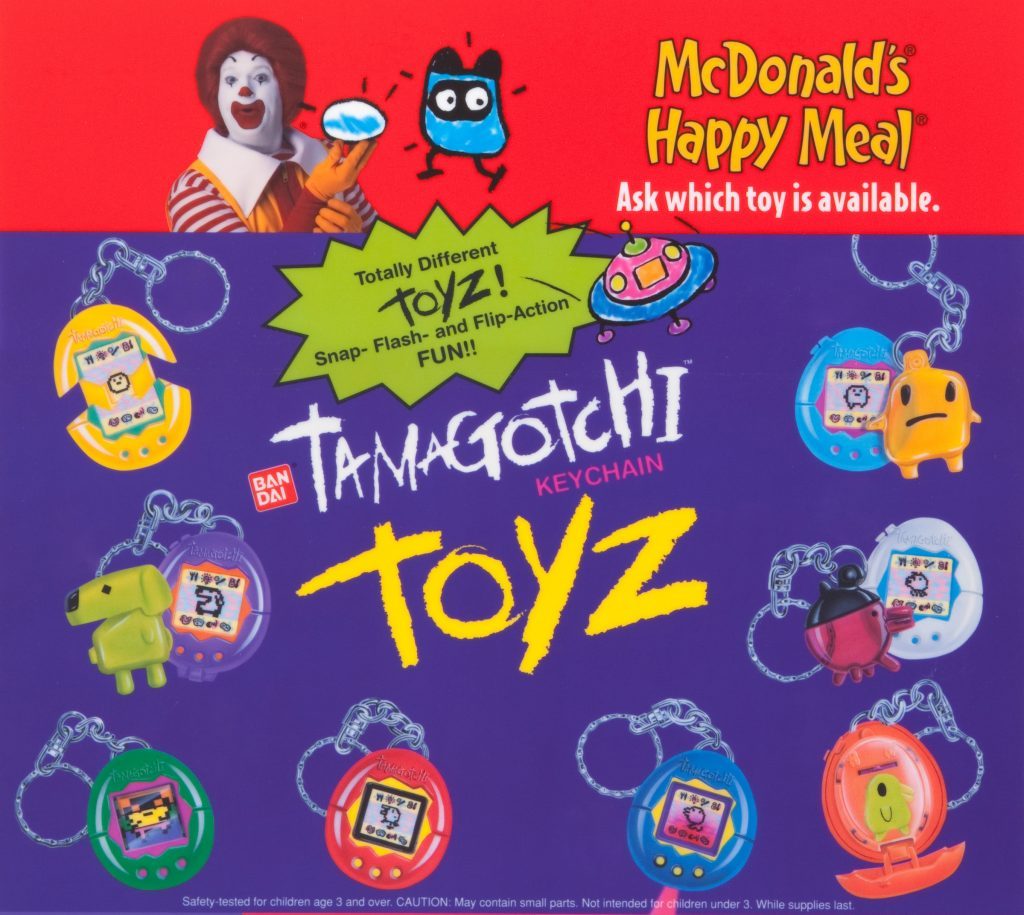 Younger millennials might remember the craze in 2004–2005, but these little electronic “pets” first debuted in 1996 and found their way into Happy Meals in ’98. Some of these cute keychain versions had a larger plastic version of the animated creature attached. We especially like how the ad puts a “z” in “toyz.” Tamagotchis were invented in Japan and made their way to the U.S.A.; find out what different foods people eat in Happy Meals around the world. 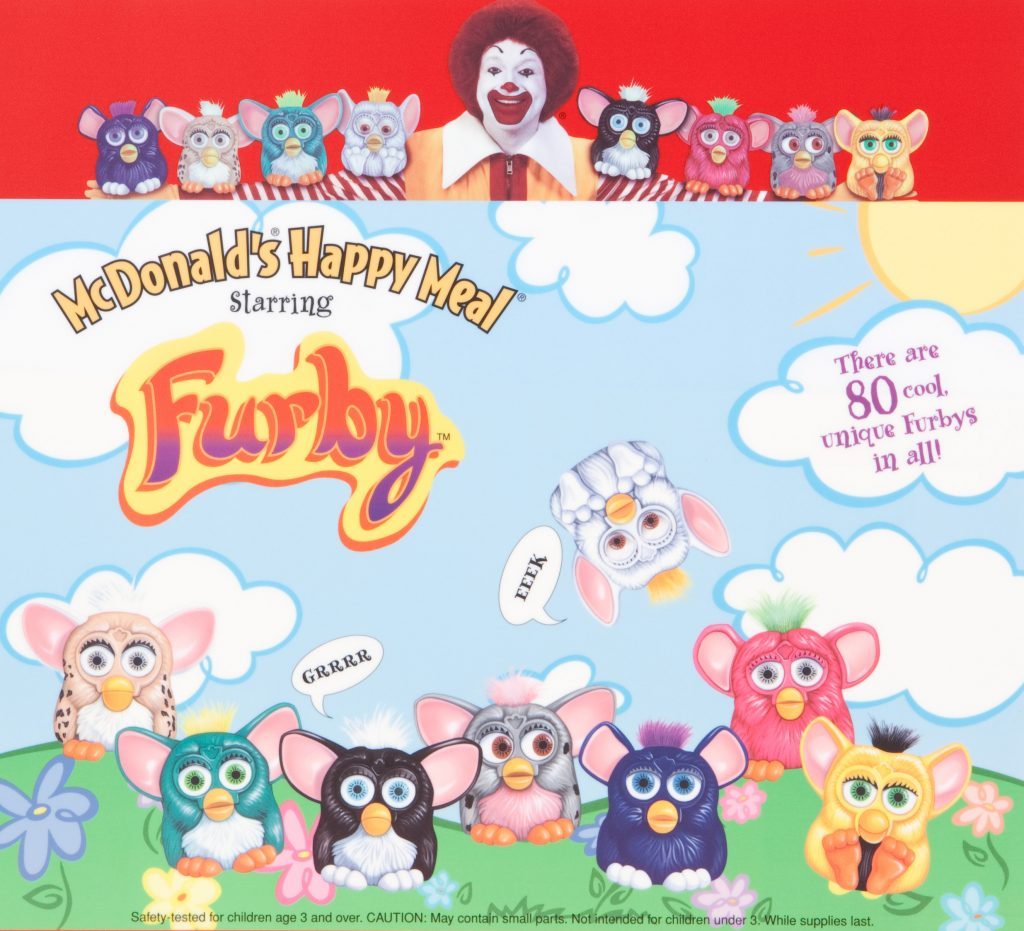 Whether you think these are cute charming toys or absolute nightmare fuel, you can’t deny that kids couldn’t get enough of them in the late ’90s. Happy Meal fans could get one of 80 different miniature Furby toys. Learn some secrets McDonald’s employees won’t tell you. 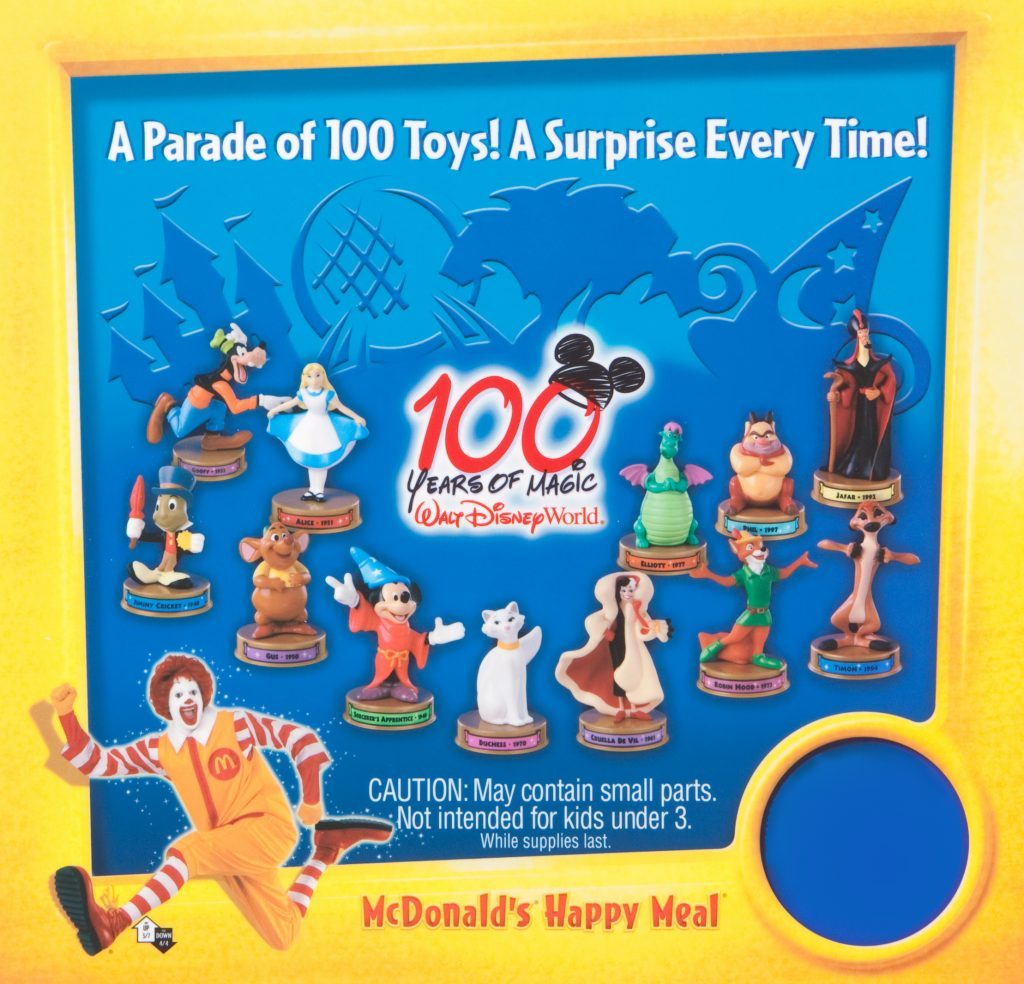 From October 2001 until the end of 2002, Disney World celebrated the 100th anniversary of Walt Disney’s birth (December 5, 1901). The Disney celebration was paired with a Happy Meal promotion, which included a full 100 toys inspired by Disney characters from throughout the decades. In this ad, you can see Jiminy Cricket, Robin Hood, Sorcerer’s Apprentice Mickey, and The Aristocats’ Duchess, among many others. Interestingly, in 2006 Disney ended its nearly 20-year partnership with McDonald’s…until 2018, when the two made amends, which is why you can find toys for recent Disney flicks like Incredibles 2 and Toy Story 4. 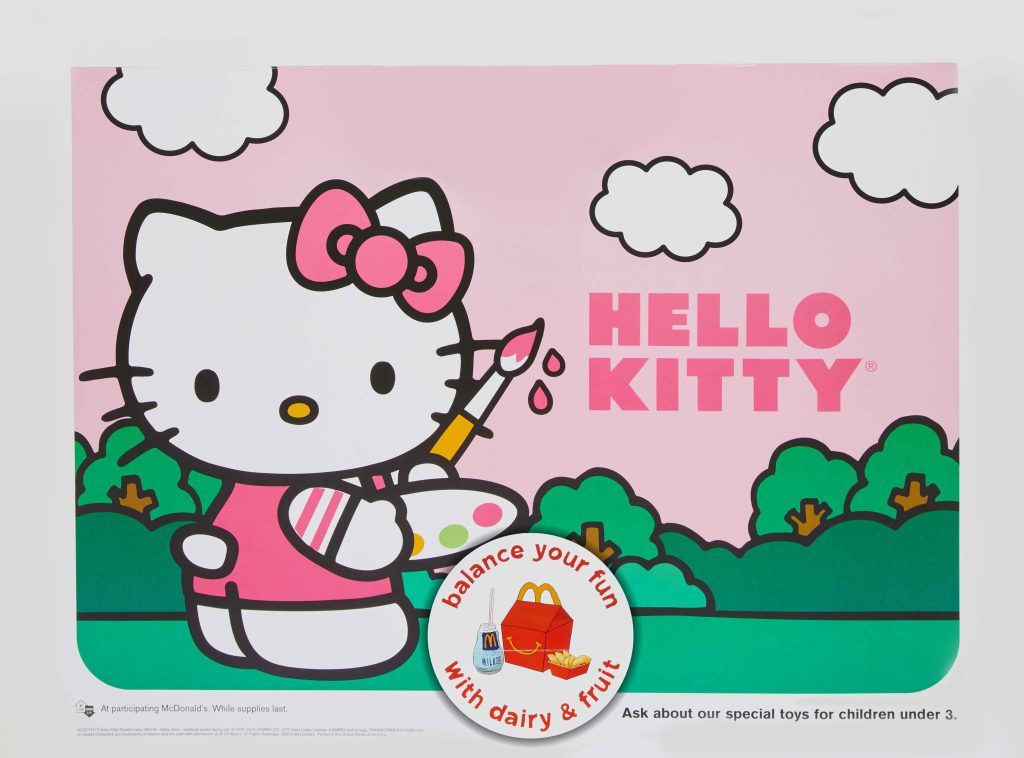 This adorable, instantly recognizable, world-famous feline first appeared in Happy Meals in 2000 (despite having been around since all the way back in 1974!). This art-inspired (and hilariously health-conscious) ad is from Kitty’s 2013 Happy Meal stint. Now that you know how the toys have changed, find out how the Happy Meal itself has changed through the years.