10 Vintage Photos of What Inaugurations Used to Look Like 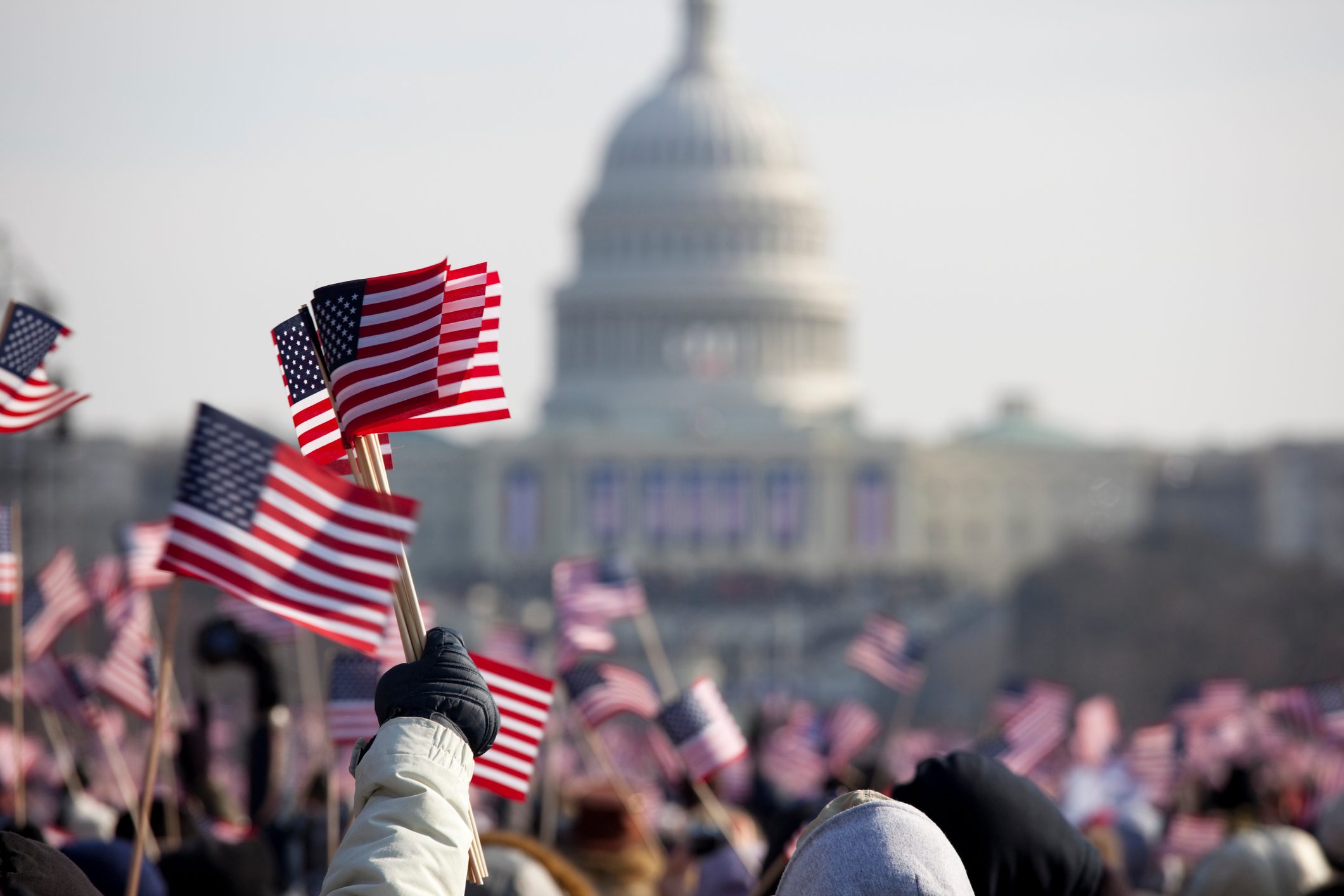 There are many traditions associated with the White House and the President of the United States. One aspect of American democracy is the transition from one political administration to another. From Franklin D. Roosevelt to Jimmy Carter, check out a few vintage photos of presidential inaugurations—along with a few photos from recent history for comparison. If you think you know your presidents, here are U.S. presidential trivia questions everyone gets wrong. 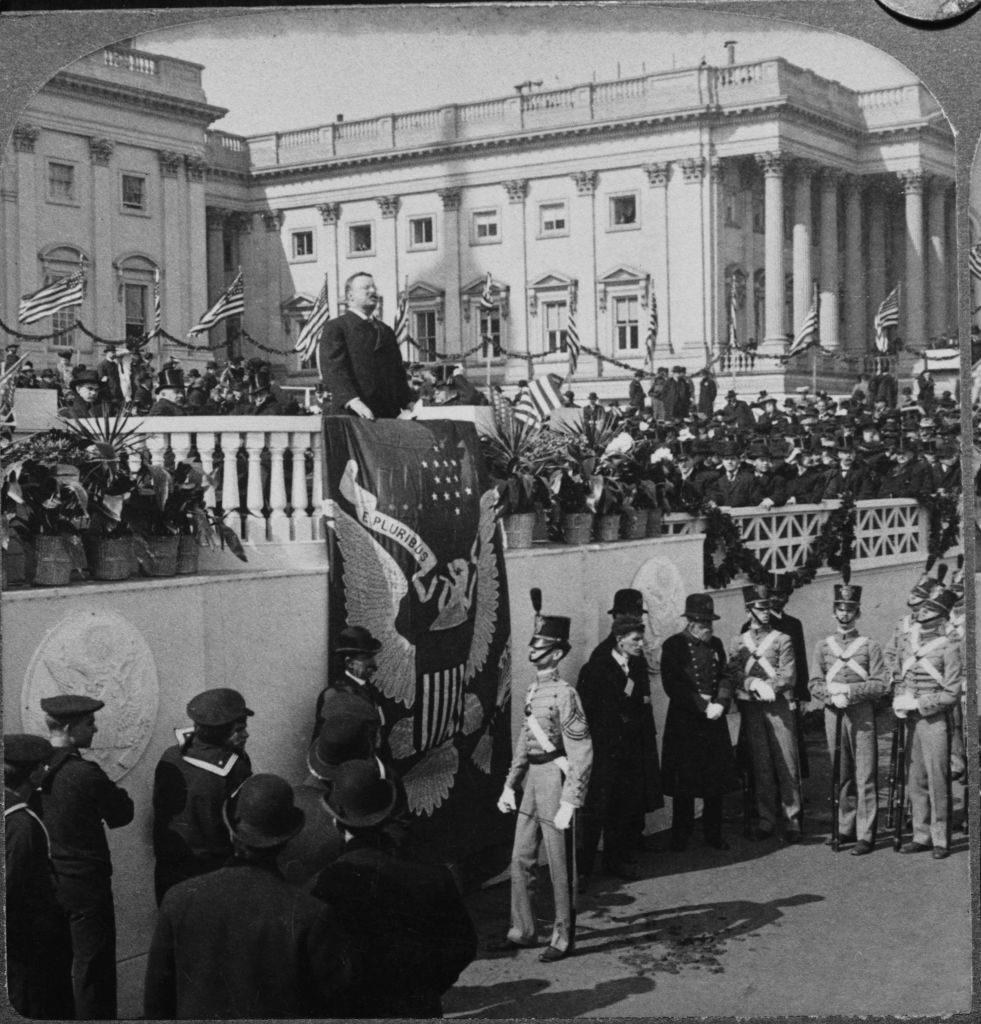 On March 4, 1905, U.S. President Theodore Roosevelt in this photo makes his inaugural address at the start of his second term. Often called Teddy Roosevelt, he made his abrupt entry into the presidency after the assassination of President William McKinley. Roosevelt became the 26th and youngest president—he was just shy of 43. He served as president of the United States from 1901 to 1909. Here are 50 more facts about America that most Americans don’t know. 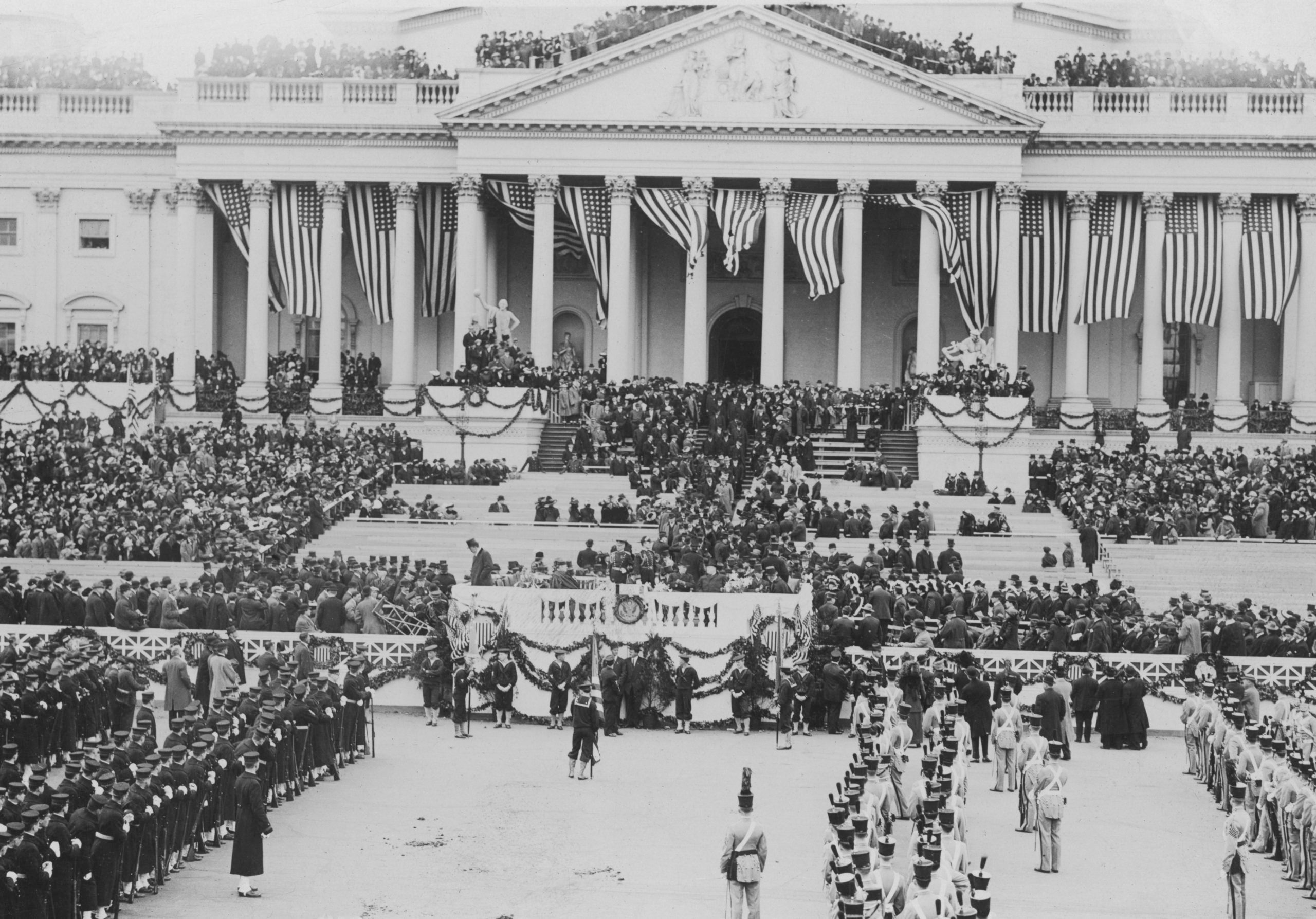 Woodrow Wilson became the 28th president of the United States of America and served as president from 1913 to 1921. Here, crowds gather as Wilson gives his inauguration speech on March 4, 1913. Did you know that Wilson was a singer? Here are a few more hidden talents of U.S. presidents. 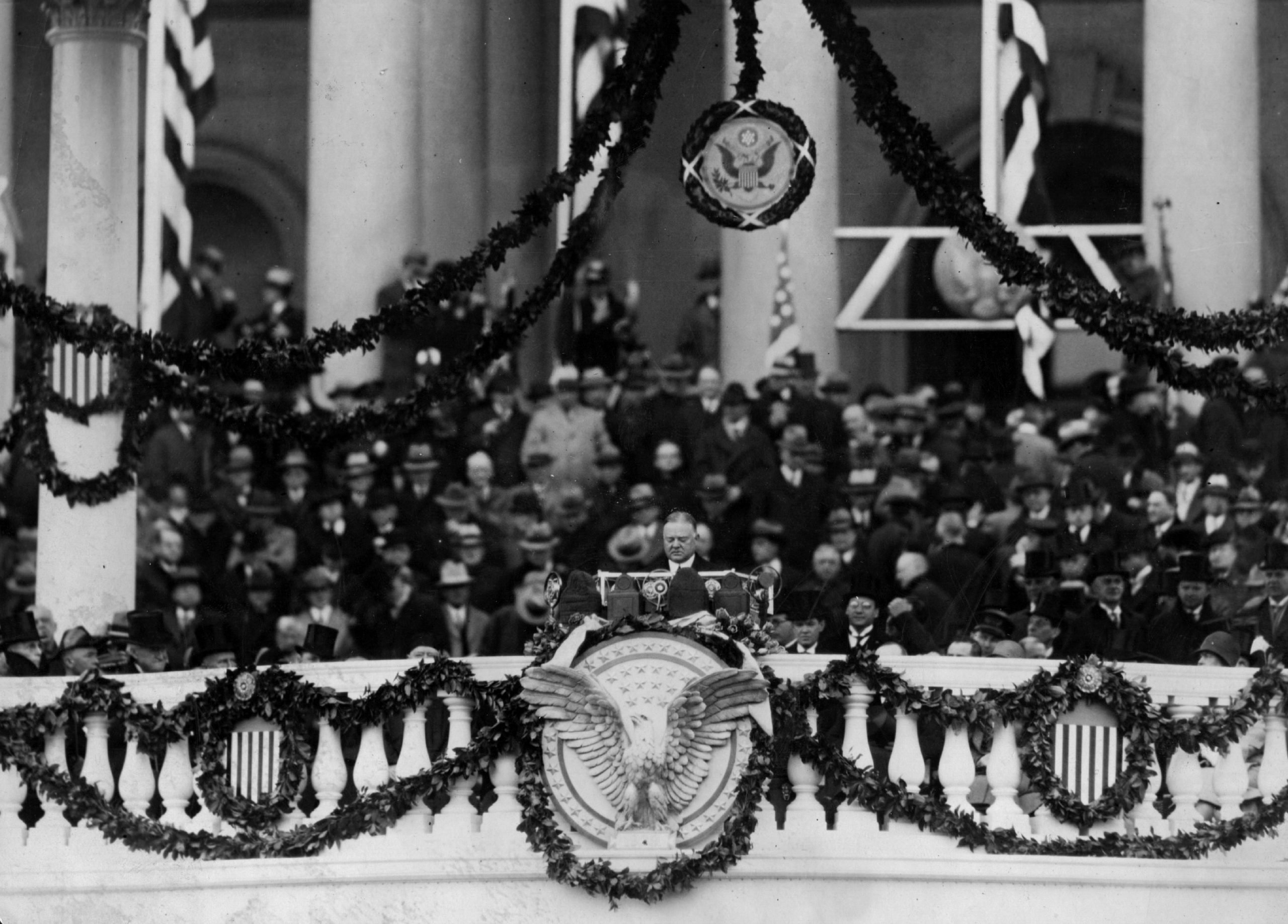 On March 4, 1929, Herbert Hoover is shown giving his inaugural speech to large crowds gathered in Washington, D.C. He served as the 31st president of the United States from 1929 to 1933, during the Great Depression. Hoover had many setbacks growing up. Hoover’s parents died a few years apart when he was a child. Orphaned at age nine, he and his siblings were separated to live with family relatives. In 1891, Hoover enrolled at Stanford University and was a member of the university’s inaugural class. He became a self-made multi-millionaire and donated the salary he had as president to charity. Did you know Hoover had his own sport called Hoover-ball, developed especially for him by his physician to keep him fit? Here are 52 other astonishing facts you never knew about U.S. presidents. 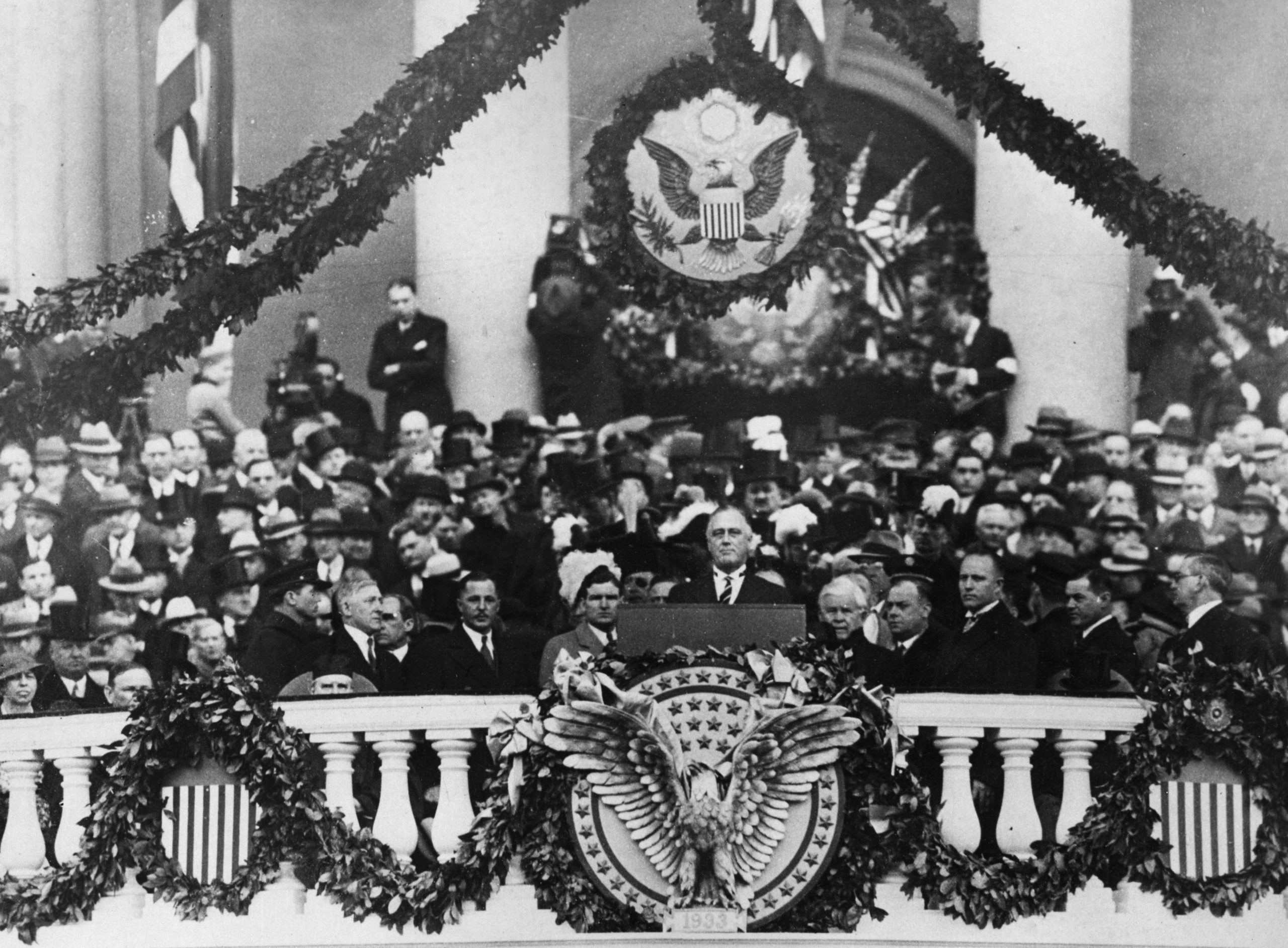 In 1933, Franklin D. Roosevelt gave his inaugural address to become the 32nd president of the United States of America. With the country in the midst of the Great Depression, Roosevelt worked quickly to help Americans. He spoke directly to the public through radio broadcasts and then, after being reelected a few times, brought the United States into World War II and helped the Allies defeat Nazi Germany. Roosevelt became the only U.S. president to serve four terms, serving from 1933 to 1945. He died in office in April 1945. There are a few presidential libraries every history buff should visit, including Franklin D. Roosevelt’s library. 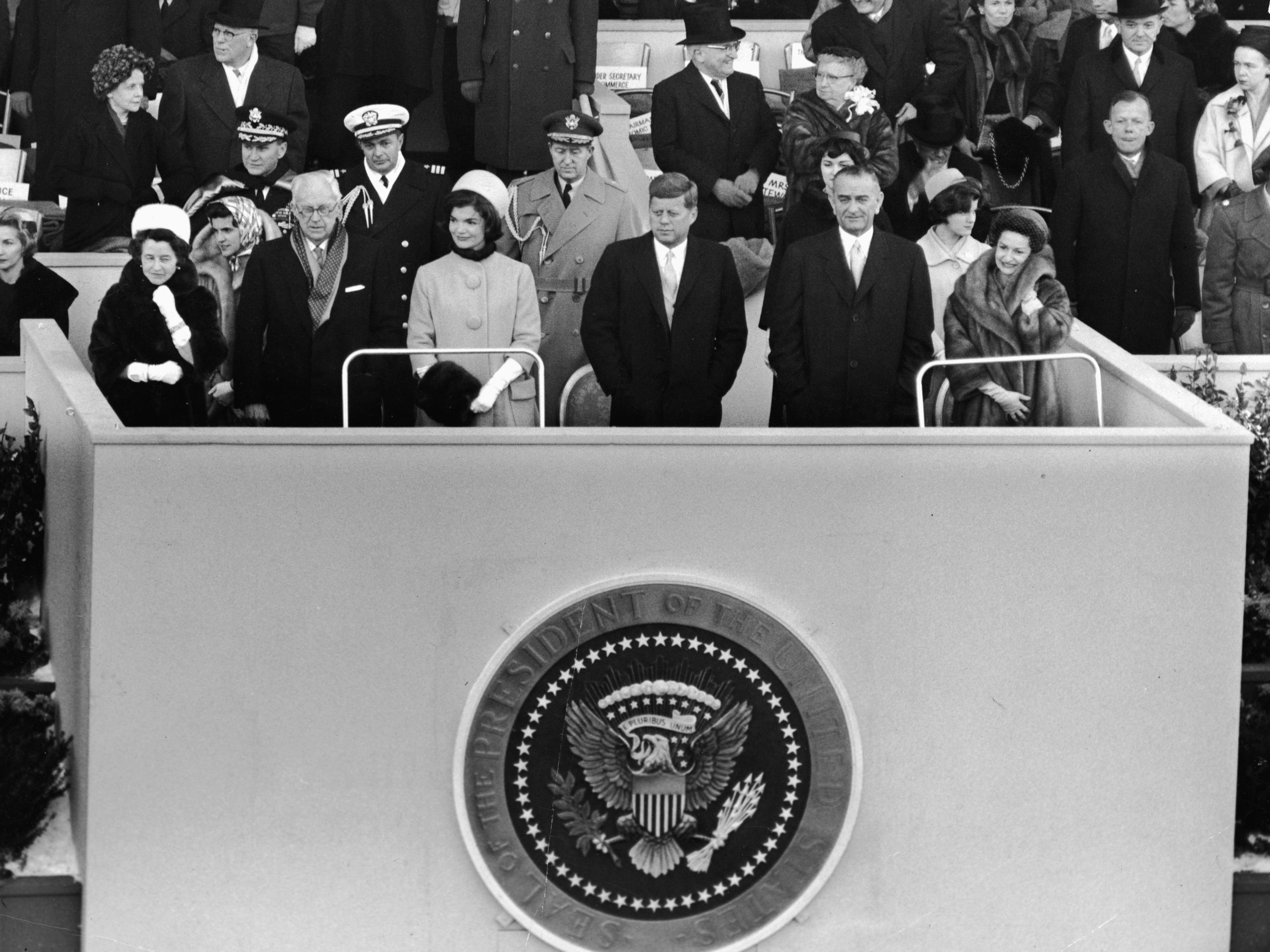 In this photo on January 20, 1961, John F. Kennedy stands on a platform for his inauguration to become the 35th president of the United States. At 43, he became the youngest U.S. president to be elected (Theodore Roosevelt was slightly younger when he stepped in after President McKinley’s assassination). Tragically, on November 22, 1963, Kennedy was assassinated in Dallas, Texas, shocking the world. This was the last thing John F. Kennedy said to Jackie before he died. 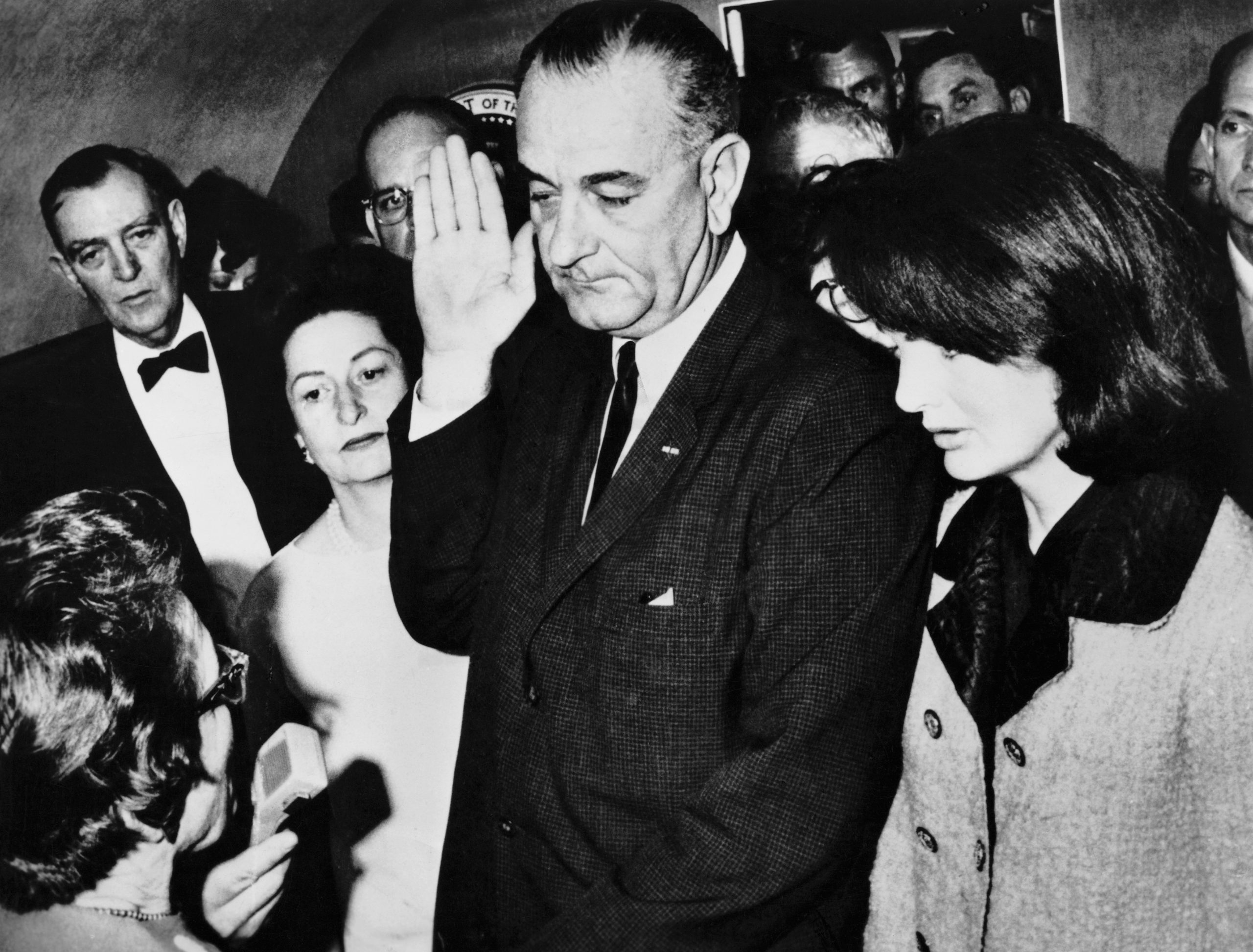 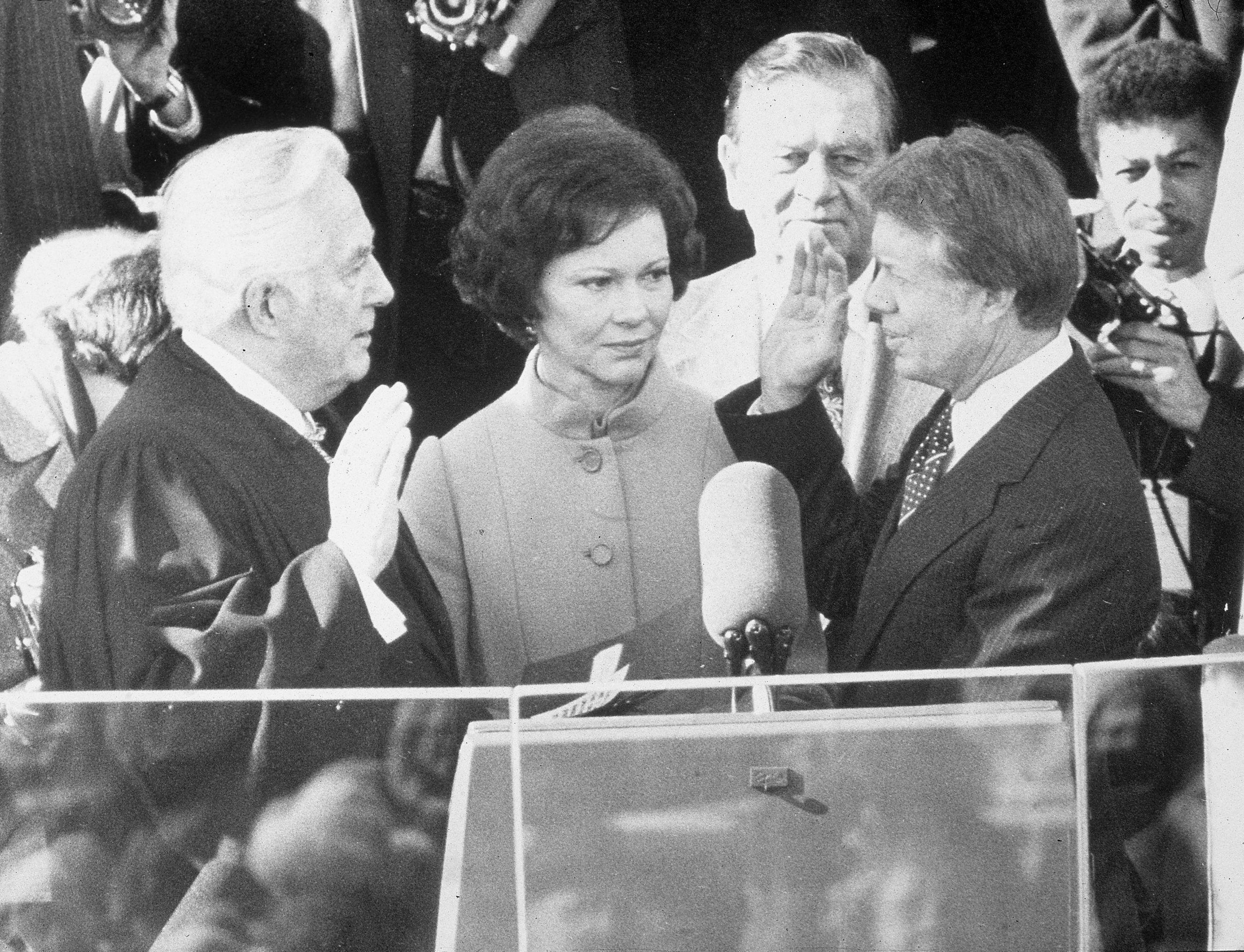 On January 20, 1977, Jimmy Carter is sworn in as the 39th president of the United States by Chief Justice Earl Burger and stands alongside First Lady Rosalynn Carter in Washington, D.C. Even though he was defeated in his bid for a second term by Ronald Reagan, Carter continued to do his part in helping countries around the world. Carter won the Nobel Peace Prize in 2002 “for his decades of untiring effort to find peaceful solutions to international conflicts, to advance democracy and human rights, and to promote economic and social development.” Here are 23 moving quotes about peace from world leaders. 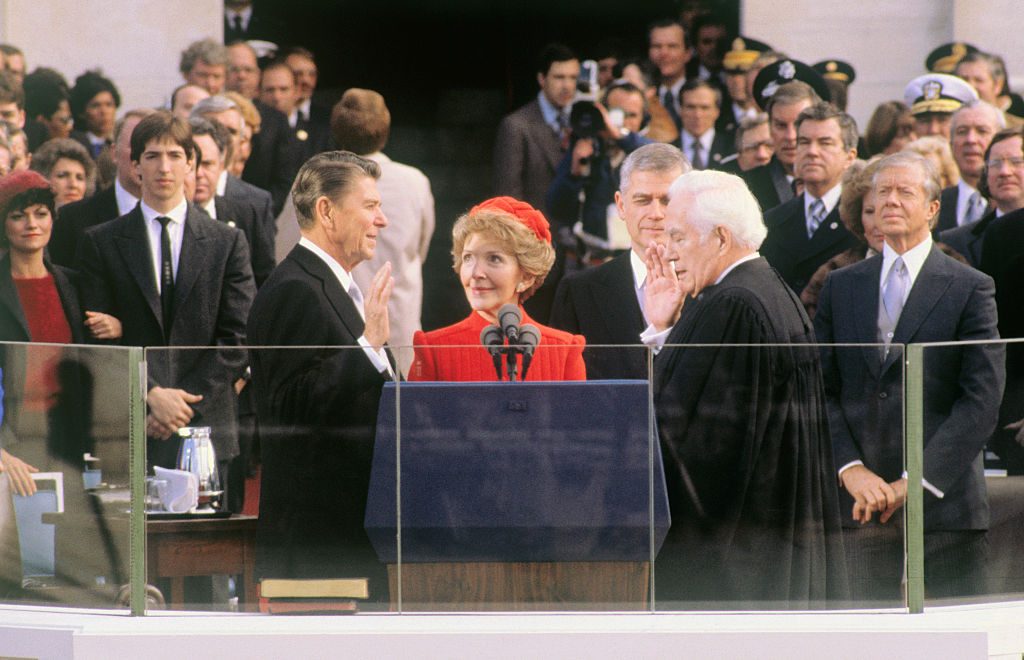 This photo was taken at Ronald Reagan’s inauguration ceremony in Washington, D.C. Next to him, his wife Nancy holds the Bible while Chief Justice Warren Burger administers the oath. Reagan served as the 40th president from 1981 to 1989; previously, he was the governor of California and a Hollywood actor. He survived an assassination attempt in 1981. Here are 15 presidential mysteries that were never solved. 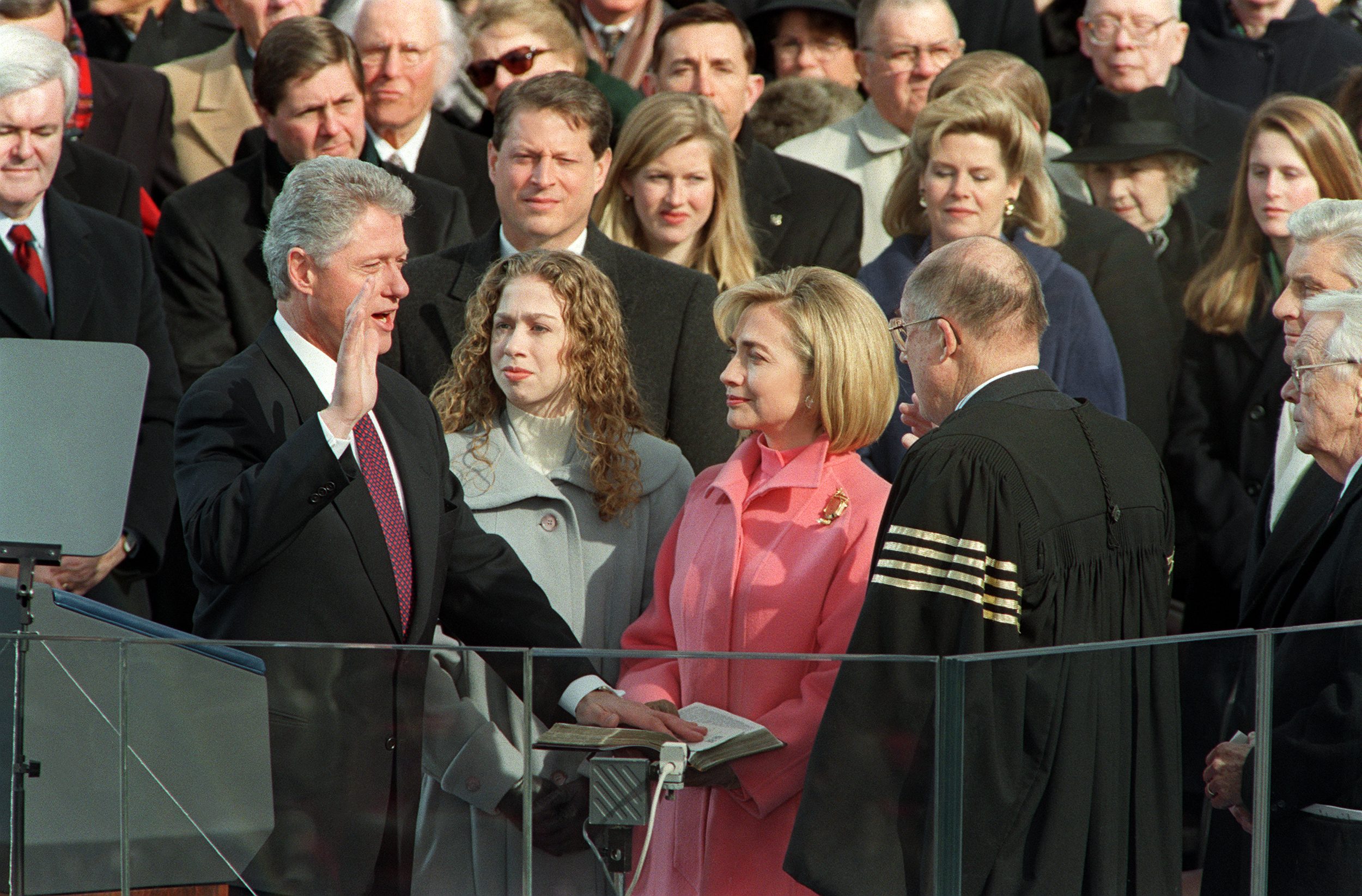 On January 20, 1997, Bill Clinton is sworn in for his second term as president of the United States by Chief Justice William Rehnquist; First Lady Hillary Clinton and their daughter Chelsea stand alongside them. Clinton was the 42nd president and served two terms from 1993 to 2001. Here are a few dramatic before-and-after photos of how presidents have aged in office. 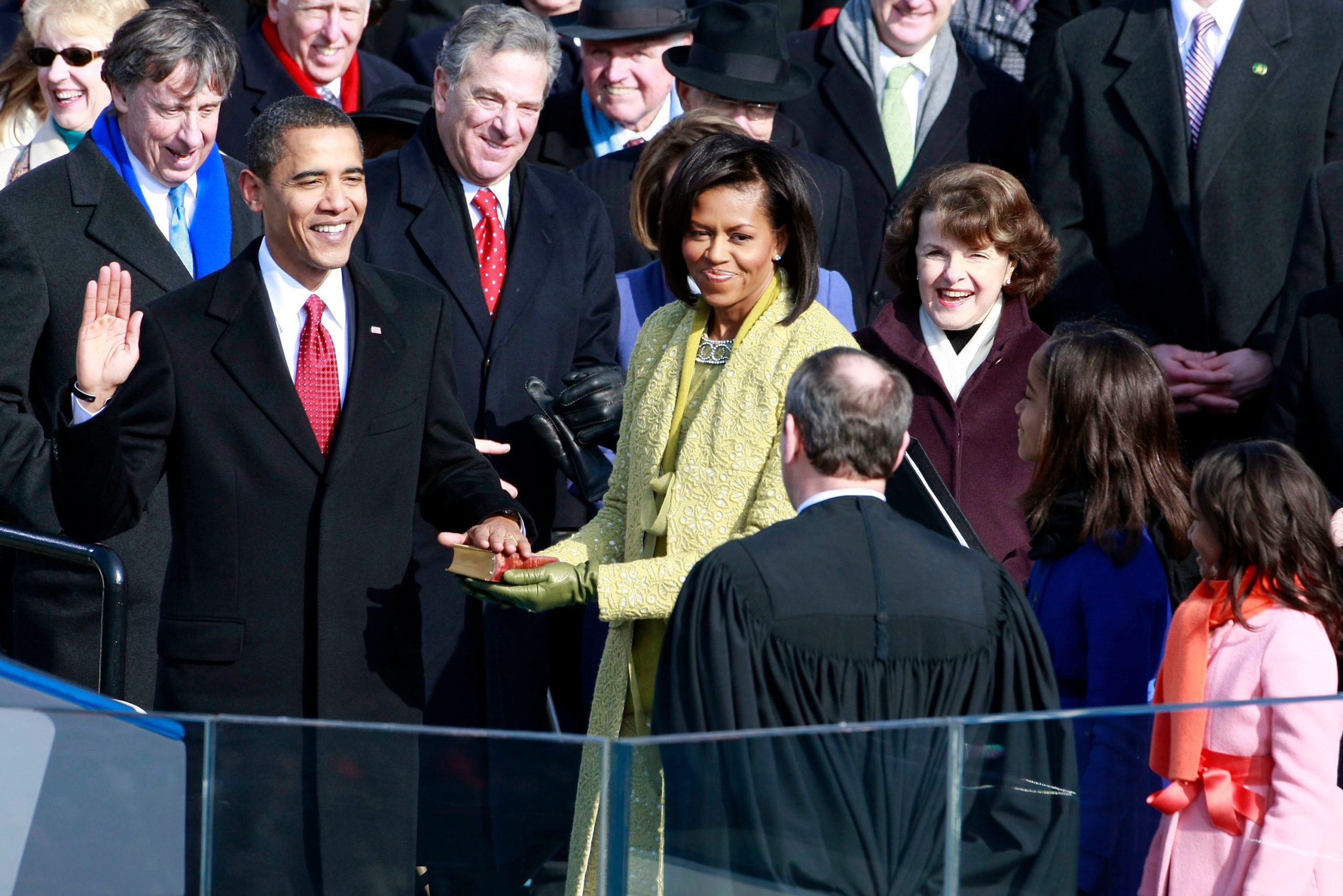