8 Fun Facts About the World’s Most Beautiful Waterfalls

Nature provides the views, we provide the details.

The site of an emergency plane landing

Dropping 3,212 feet from the top of the Auyán-Tepuí plateau (or “Devil’s Mountain” in English), Angel Falls is the tallest waterfall in the world. Located in Venezuela’s Canaima National Park, Angel Falls is named after the adventurous American pilot Jimmy Angel who emergency landed his airplane there in 1937. The plane remained there for 33 years, and although the original is now in an aviation museum, Angel Falls’ visitors can still find a replica plane placed on top of the plateau today. Check out these 14 ocean mysteries that scientists still can’t explain!

The thousand-year-old (and then some) waterfall

As one of Iceland’s most impressive waterfalls, horseshoe-shaped Godafoss features water rushing down a cliff measuring 40 feet high and 100 feet wide. Godafoss, meaning Waterfall of the Gods, got its name in the year 1000 when Iceland was converting from pagan religious beliefs to Christianity. The story goes that Iceland’s chieftain at the time, Thorgeir, threw statues of the heathen gods into the waterfall, symbolizing the switch to Christianity and giving the falls their name. On your next trip, make sure you visit one of the 10 beautiful natural pools in the world.

The tallest waterfall in Central Europe

Nestled in Austria’s Hohe Tauern National Park, Krimml Waterfall is the tallest waterfall in Central Europe, reaching a height of 380 meters. The water originates at Krimmlr Ache, a glacial creek that serves as the source of the falls, and plummets over three tiers of rock formations. A one and a half hour hike up the falls brings you to Bergerblick, the highest point that offers the most spectacular views of the falls below. Don’t miss these stunning views of these spectacular sea caves.

A waterfall watched over by Buddha

The Dietian Falls can be found cascading 75 meters over the Guichun River on the border of China and Vietnam. Depending on the time of year, the amount of water traveling down the waterfall will range from a full-speed rush in the humid months of June and July to a more gentle splash in the drier seasons. To complement the peaceful surroundings of rice paddies and rock formations, a tiny Buddhist shrine sits atop the falls. 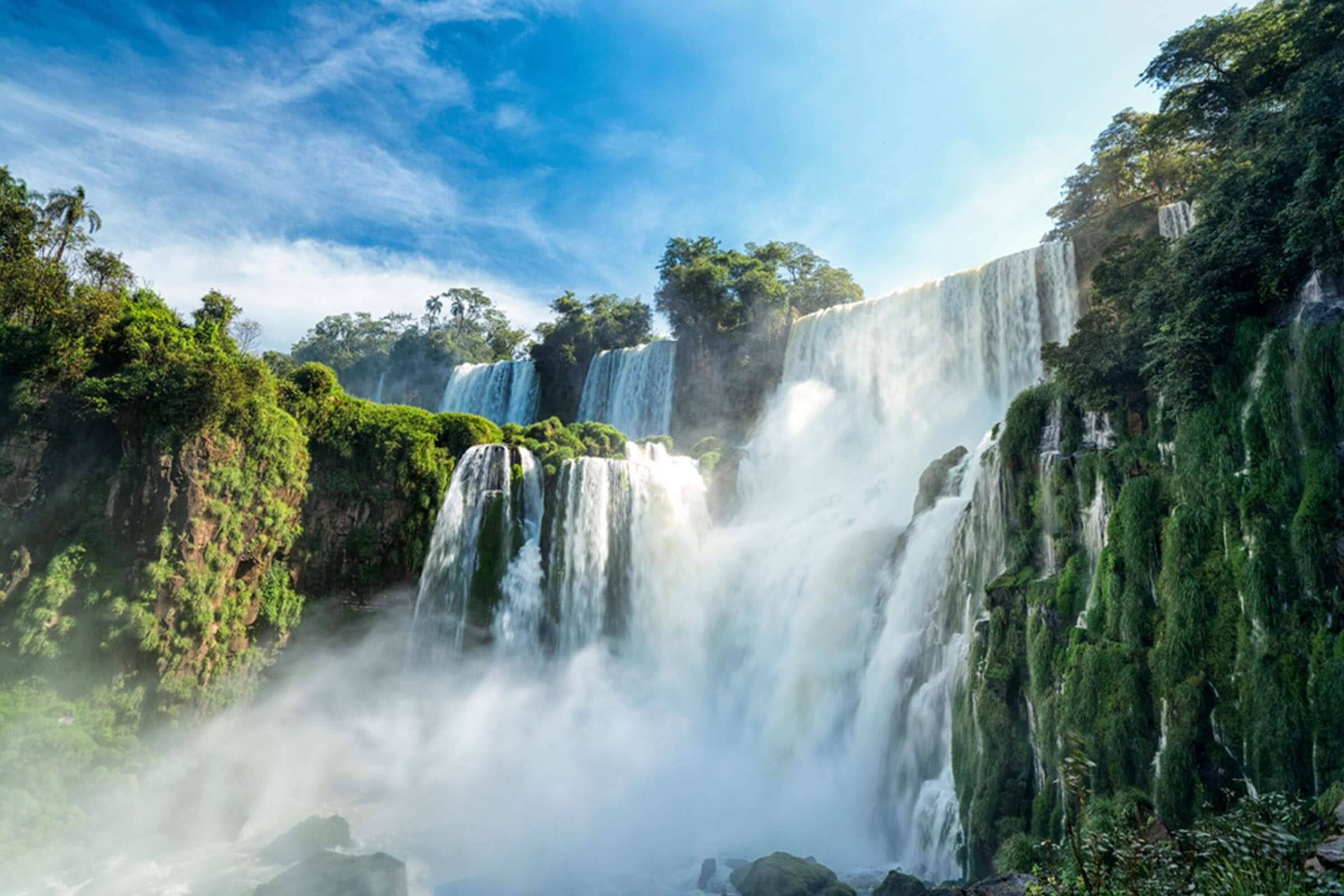 Although the majority of the Iguazu Falls are located in Argentina, many say you can find a better overall view from the Brazilian side. They can be accessed through any of the three cities in the tri-border area between Brazil, Argentina and Paraguay. Iguazu Falls are taller and twice as wide as Niagara Falls and it has been said that when Eleanor Roosevelt saw these falls for the first time she exclaimed, “Poor Niagara!” These are the most incredible undersea treasures ever found!

It’s in the oldest state park in the U.S.

Niagara Falls State Park, designed by famous landscape architect Frederick Law Olmsted, is the oldest state park in the U.S., established in 1885. Niagara Falls is sourced by the Niagara River which is supplied by water from Lake Superior, Lake Michigan, Lake Huron and Lake Erie, four of the five Great Lakes, allowing 3,160 tons of water to flow over Niagara Falls each second. The iconic falls were first seen and described in 1678 by Father Louis Hennepin on an exploring expedition in the Niagara region.

The Plitvice Lakes National Park is world-famous for its series of 16 interconnected, breathtaking lakes, caves, and waterfalls. The park features two main waterfalls: the Large Waterfall at the end of the lower lakes, and the Galovac Waterfall at the end of the upper lakes. But what makes this park so unique and beautiful are the formations of many smaller waterfalls that flow throughout the series of lakes through naturally created mossy cascades. Start adding these gorgeous waterfalls from every state to your travel bucket list.

It separates itself each summer

Koosah Falls are one of three major waterfalls along the McKenzie River in Oregon. Although there has been some dispute over the true height of the waterfall, with measurements ranging from 54 to 120 feet, the true height is said to be around 64 feet. The appearance of Koosah Falls changes dramatically from season to season, in the summer it appears as being two separate segments, but during the height of snow melting in the winter, water spreads seamlessly across the 70 foot wide ledge. Here are some more crazy facts about the earth you never learned in school.