Everything you never realized you wanted to know about the famous canine competition and its posh purebreds.

The top show for top dogs

The Westminster Kennel Club Dog Show (WDS) was created where countless other great ideas are born—around a table at a bar. According to Westminster history, a group of guys (circa the 1870s), used to meet up at a hotel bar near New York’s Union Station and shoot the breeze about their shooting skills and brag about the abilities of their dogs in the field. On one of those nights, the group decided to put on a dog show and name their group after the hotel. Now in its 144th year, the WDS still upholds its original bylaws “to increase the interest in dogs, and thus improve the breeds, and to hold an Annual Dog Show in the city of New York.” Here are some more fun facts about the world’s most famous canine competition. If this inspires you to up your own pup’s game, check out these easy dog tricks you could start teaching today.

One of the oldest televised events

The WDS had already been around for more than 70 years when television sets started taking up real estate in living rooms in the late 1940s. Regularly scheduled television programs were scarce in those days, yet the WDS was one of the early broadcasts that ushered in the Golden Age of television. Its small-screen debut was in 1948—a few years before classics like I Love Lucy and The Lone Ranger. Since then, the WDS has aired on a few different networks, the latest being Fox Sports since 2017. Fox Sports was actually the first to televise live coverage of the daytime breed judging. While they may not have made it to Westminster, these shelter dogs became famous TV stars!

If 205 breeds of dogs aren’t enough for you to swoon over, we’ve got some good news for you: Nine of those breeds are further divided into varieties based on size, color, and coat. For size, it’s the Beagle, Manchester Terrier, and Poodle. The Beagle and Manchester Terrier come in two sizes, and the Poodle comes in three. In the color variety, the Cocker Spaniel shows with three varieties of colors, while the Bull Terrier and English Toy Spaniel each have two colors they compete in. Finally, the Dachshund, Chihuahua, and Collie showcase a variety of coats within their breeds. The Dachshund comes in longhaired, smooth, and wirehaired. Chihuahuas flaunt a long or smooth coat, and the beautiful Collie, a rough or smooth coat. Looking for a family-friendly cuddle-cake? Check out these low-maintenance short-haired dogs that would be a great addition to your family.

In 1892, Westminster raised the entry fee from $2 to $5, which still included attendants to feed and exercise the dogs, but inflation wasn’t the reason for the increase. According to Westminster’s Historical Highlights, “the New York Times reported that the fee rise was done to discourage the entry of other than first-rate dogs.” Today, the fee is $100 (and that doesn’t include attendants), and to compete, a dog must be an American Kennel Club Champion (AKC) of record, meaning the dog has acquired 15 points from other AKC dog shows. Show-dog pampering and competition fees aside, this is how much it costs to care for a dog. 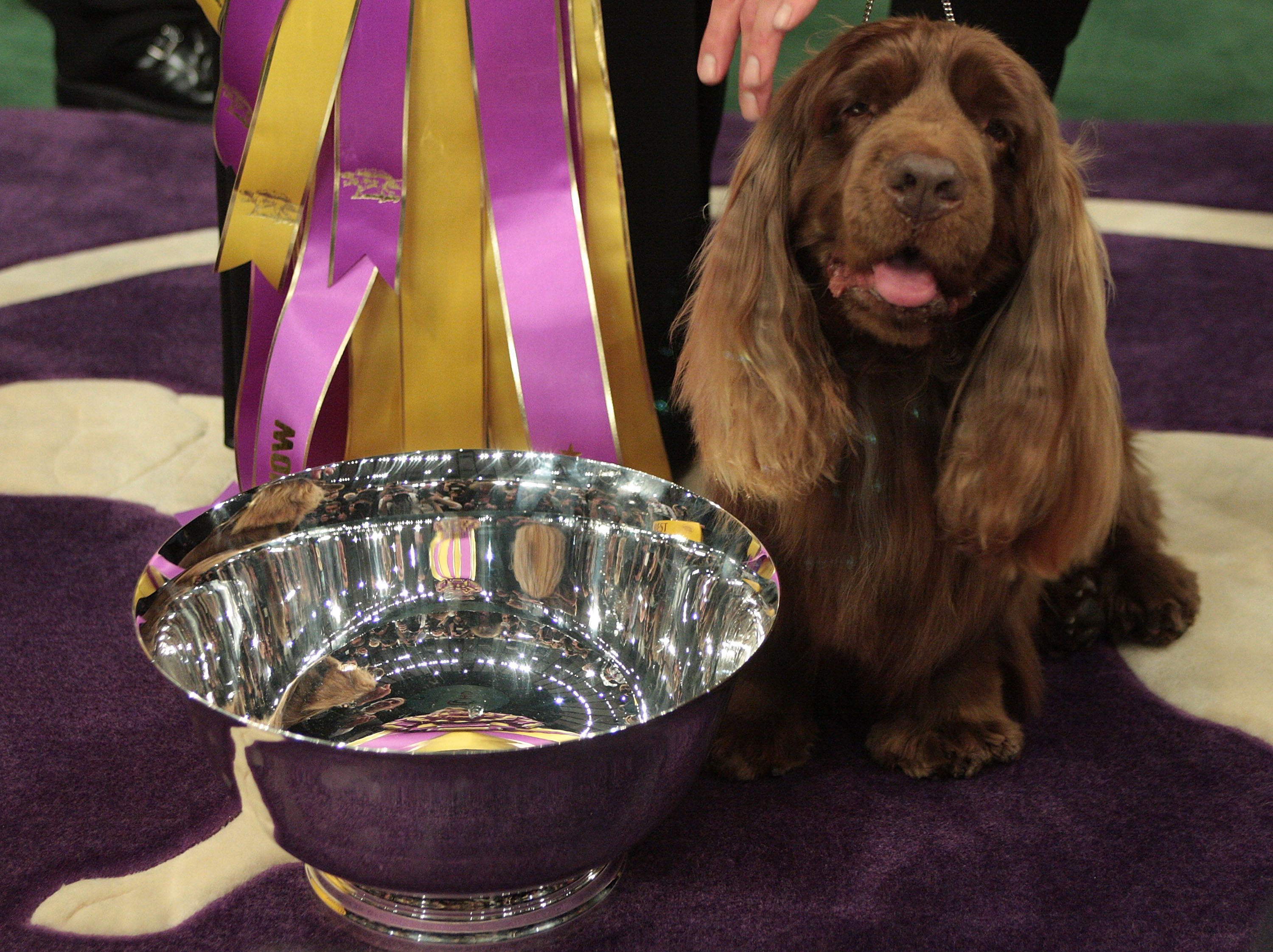 Age is just a number

A look back at the Facts & Figures of Westminster proves that age doesn’t matter when it comes to wowing the judges. (That said, a dog has to be at least 6 months old to compete in AKC shows.) The youngest winner was a Rough Collie, Laund Loyalty of Bellhaven, who won the award in 1929 at the young age of exactly 9 months. On the flip side, a Sussex Spaniel named Stump (his registered name was Ch. Clussexx Three D Grinchy Glee) became the oldest dog to capture Best in Show at 10 years, 2 months, and 9 days of age in 2009. Here are 14 reasons to adopt a sweet-as-sugar older dog.

The 144th WDS will welcome 2,630 dogs from 49 states, Washington D.C., and Puerto Rico. The states with the most canines at WDS are California (238), New York (208), Pennsylvania (175), New Jersey (156), Florida (153), Texas (124), and Massachusetts (114). While most of the dogs call the United States home, 19 countries are represented in all. Three dogs will travel the farthest—two from Australia and one from Thailand. By the way, these are the most and least expensive dog breeds in the world.

This breed has won the most

Lively and spirited, terriers were bred to hunt and kill vermin. Today, they are hunting for something more prestigious: the coveted Best in Show trophy. Over the course of Westminster history, terriers have surpassed all other dog breeds to become the competition’s top dog—winning 47 of the coveted Best in Show honors. Bragging rights go specifically to the Wire Fox Terrier for fetching 15 Best in Show wins. The Scottish Terrier comes in second with eight wins. The other 12 terriers that make up the 47 are the Airedale, Sealyham, Smooth Fox, Lakeland, Norwich, West Highland White, Bedlington, Bull (colored and white), Kerry Blue, Skye, and Welsh. Quiz time! Can you guess these dog breeds based on one picture?

When it’s judgment time in the ring, the handler will often “stack” the dog. Stack is defined by Westminster as “the pose itself by a dog or the posing of the dog by a handler in its natural stance.” At this time, the judge gives the dog a once-over. They’re actually getting a closer look and feel for the dog’s structure, including their muscles, bones, teeth, ears, and paws to evaluate against the breed’s specific standard. Meanwhile, the handler keeps the bait (a super tasty dog treat) in their own mouth so the dog will look at their face (or the judge’s face), creating the ultimate stack position for judging. In case you were wondering, handlers aren’t putting dry biscuits or raw meat into their mouths. The treats are usually what dogs crave most, like cut-up hot dogs or other cooked meats. Just FYI, never feed your dog these 11 foods.

These dogs are ramped up!

If you’ve ever watched the WDS, you’ve probably noticed that some dogs get to trot up a little ramp to a table for judging and some are even lifted to the table. What’s up with that? “The purpose of these low-standing but heavy breeds being judged on a ramp is safety for the dog and handler, while also making it easy for the judge to do their examination,” says Gail Miller Bisher, Director of Communications for Westminster Kennel Club. The breeds that strut up the ramp with their own unique swagger are the Sussex Spaniel, Basset Hound, Bulldog, Chinese Shar-Pei, and Chow Chow. Doggone it! Of course, a dog doesn’t have to be purebred to be lovable and downright perfect. These are the cutest mixed breeds you’ll want to bring home. 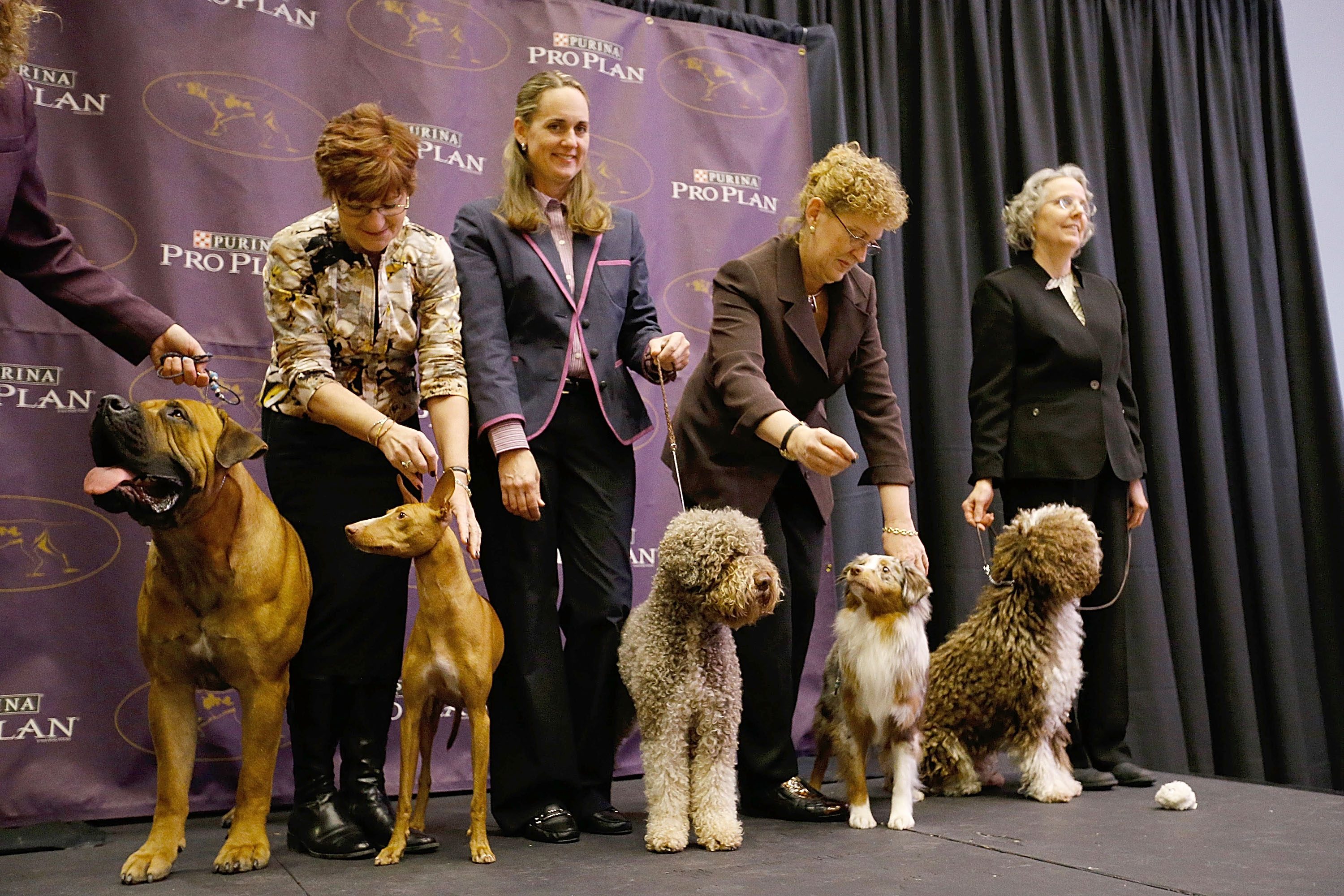 The Best in Show finalists always include seven dogs, one from each of the recognized groups—sporting, hound, toy, terrier, herding, working, and non-working. However, at the 143rd WDS, only six groups vied for the Best in Show title. According to ABC News, a Schipperke named Colton from Howell, Michigan, was excused and ruled ineligible for Best in Show due to a conflict of interest earlier in the day. Apparently, Best in Show judge Peter Green co-owned dogs with one of Colton’s co-owners. Talk about drama—these famous dog show hosts have seen it all!

You can take selfies with your favorite breeds

The WDS is unique in that it is a benched show, which means all the dogs must be available for the public to meet. “The entire purpose of a benched show is to educate the public,” explains Miller Bisher. “We encourage people to come meet the dogs and talk to the breeders and owners about the breeds. Aside from [being] fun to pet all the dogs, this allows the public a chance to learn about the breeds before bringing one into their home.”

Bench days are long—around eight hours. While the dogs are at their designated benches, they pass the time waiting to compete by napping or getting some last-minute grooming. Always ask if you can pet the dog or take a selfie first. Here are some more interesting behind-the-scenes secrets from dog shows.

Sure, Westminster gives off a posh vibe with all the purebred dogs groomed to perfection, surrounded by the elegantly dressed judges and spectators. Still, Westminster’s love for dogs goes beyond the championship lineage of purebreds. Westminster’s charitable giving began back in 1877 at the very first show. It was so popular that it sold out, and the club subsequently extended the show for an extra day—and gave all the proceeds from that extra day to the ASPCA. These days, Westminster’s giving isn’t just limited to dogs. They also support disaster relief for companion animals in the wake of natural disasters, including the Humane Society of the United States, AKC Companion Animal Recovery, AKC Humane Fund, AKC Reunite, and the ASPCA.

Looking for a fur baby to add to your own family? Check out these 47 super cute dogs that need forever homes.

There’s more to see than Best in Show

Best in Show captures the most attention, but there other competitions happening at the WDS. For instance, there’s the fun-to-watch Masters Agility Championship. This competition is open all dogs, including mixed breeds, who have achieved high-ranking AKC titles. The course features challenging obstacles, tunnels, jumps, an A-frame, and a seesaw. The Masters Obedience Championship invites the top dogs, including mixed breeds, who have earned Obedience Trial Champion points. A judge evaluates a series of exercises that replicate the desired manners of a dog at home, on the road, or while socializing with other dogs. Here’s how you can find the best dog obedience training school.

How much the Best in Show winner gets

Zero. Zip. Zilch. The Best in Show winner doesn’t earn any prize money. Instead, the winning dog and handler are awarded a trophy, crystal bowl, and commemorative picture frame. “Winning Best in Show at Westminster is the ultimate prize in the sport. The dog and his owners, breeders, and handler become a part of the history of our sport. The prestige is unrivaled,” says Miller Bisher.

Still, the winner does get some nice perks. In a time-honored tradition of the WDS, the Best in Show dog gets to chow down on a celebratory lunch—usually steak at Sardi’s, the famous Broadway restaurant known for its caricatures of show-business celebs adorning the walls. That’s not to say that being a top dog isn’t lucrative. Many Best in Show winners have plenty of opportunities to cash in with sponsorships, appearances, and breeding rights after retirement. Don’t miss these photos of adorable dogs and their quirky owners at Westminster.