What Barbie Looked Like the Decade You Were Born

Barbie has changed a lot since she was introduced to the world 61 years ago. Her face, body, hairstyles, fashions, and careers are constantly evolving to reflect the trends and societal ideals of the time.

Whether you were Barbies or Bratz, you cannot deny that Barbie had some looks over the years—a true chameleon of the times. Her outfits and styles are rivaled in multifariousness only by her equally varied resumé: ballerina, astronaut, fashion designer, CEO, rock star. What she looked like when you were born isn’t just about the relevant fashion trends, but the culture of the time.

We know her as Barbie, but her full name is Barbara Millicent Roberts. Creator Ruth Handler named her after her daughter, Barbara. (Ken, who debuted as Barbie’s boyfriend in 1961, was named after Handler’s son, Kenneth.) Barbie no doubt stood out at a New York toy fair in 1959. Up until that time, girls played with baby dolls, assuming a motherly and nurturing role, but this doll didn’t require nurturing. She was all grown up with a college degree and financially independent with careers as a fashion designer, astronaut, and nurse shortly after her launch. This is one of the rare Barbie dolls that could fetch quite the handsome pay day.

Sorry, Neil Armstrong—Barbie traveled into space four years before you stepped on the moon. And that was after she had gigs as a ballerina, fashion designer, and tennis player. Of course, Barbie didn’t travel into the cosmos with a drab uniform. She entered galaxies unknown in style, with a silver metallic jumpsuit and white space helmet (that never gave her hat-hair). Just like this blast-from-the-past Barbie, here are 13 vintage Barbie dolls that are worth a fortune today.

Barbie celebrated the mod era with a twist and turn action. She even had mod friends who were just as fashion-forward as she was. Barbie was available in blonde, brownette (that’s light brown), brunette, or as a redhead. She was also the first Barbie model that had longer hair with bangs, blue eyes, and rooted eyelashes instead of eyelashes that were painted on. According to Mattel, this Barbie is highly sought after today. Check out these other childhood collections that be valuable.

Barbie got a new friend, Christie, the first African-American doll in the Barbie line. She popped out of the box in a mod-inspired swimsuit with a trendy short ’60s hairstyle. That was super cool on its own, but she also could talk—via string on the back of her neck. Stacey (Barbie’s British chum) and Barbie had the ability to talk that year as well, which came in handy when discussing careers, fashion, and, of course, the shenanigans of Ken.

The 1970s brought new changes in Barbie’s appearance. Influenced by the alternative lifestyles of the decade, Barbie got a facelift or, as Mattel says, “face sculpt” that included an open smile with those enviable pearly whites and, thanks to the feminist movement, sparkling blue eyes that actually focused forward, projecting an empowered and confident look instead of that coy sideways glance. And she literally got a “spray tan,” now sporting tanned legs and long, straight hair. She debuted her new look in a blue tricot swimsuit with matching sunglasses. Here are 12 of the most expensive Barbie dolls ever made.

Not many women were applying to medical school, but that didn’t stop Barbie. She already had some medical experience under her belt when she became a nurse in 1961. Now empowered, she set her focus on becoming a surgeon, and in 1973, she began saving lives in the operating room.

After four years as a life-saving surgeon, Barbie earned a night out on the town. She strolled down the red carpet with a broader smile and fuller hair, parted to one side. Her eyes really popped with brightly painted eyes, blue shimmer eye shadow, and a pale pink lip gloss that was on trend with the glittery disco glam popular in the ’70s. Here are 20 things you probably didn’t know about Barbie.

Over the years, many diverse dolls became available, but in 1980, Mattel released the first official African-American Barbie (different from Christie, who was Barbie’s friend) and a Hispanic doll named Barbie. In the years to follow, more than 40 international countries were represented, including Italian Barbie, Scottish Barbie, Japanese Barbie, Peruvian Barbie, and Eskimo Barbie.

You can have it all if you want when you’re CEO Barbie. In 1985, Day-to-Night Barbie celebrated the workplace evolution and broke the glass ceiling as a CEO. Day-to-Night Barbie could go from a rewarding career in her pink power suit and still maintain an active social life with an in this first ever day to night ensemble. Don’t miss these 18 photos that will bring you back to the ’80s.

Barbie and her 1980s big hair took the stage as lead singer of her New Wave rock group, Barbie and the Rockers. The characters Dee Dee, Dana, Diva, and Derek were introduced as her bandmates. These dazzling superstars were ready to rock with their bright instruments, dressed in the decade’s favorite fashions of neon colors, spandex, leg warmers, and scrunchies.

The Barbie was the first of the Bob Mackie series; Mackie is an Emmy award-winning costume designer most known for his glamorous (and sometimes revealing) ensembles worn by celebrities including Cher, Diana Ross, and Tina Turner. (There are even Diana Ross and Cher Barbies.) Gold Barbie is dressed in a fantasy couture gown with 5,000 hand-sewn golden sequins accented with a white feather boa. Her platinum blonde hair is pulled up and accented by a golden headpiece. Check out these 19 things that 2000s kids will never understand—but will sure make you feel old. 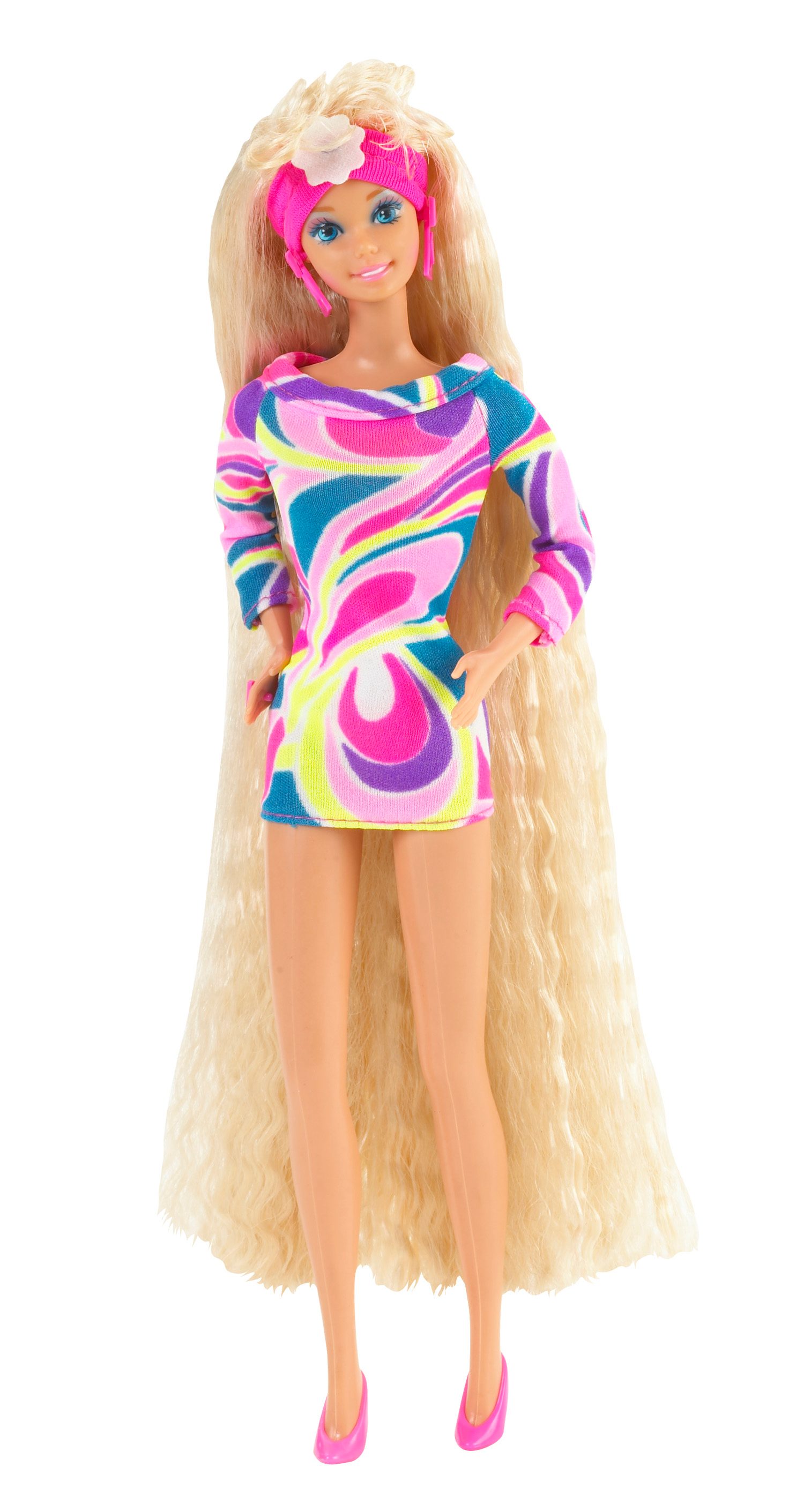 With more than 10 million dolls sold, Totally Hair Barbie totally takes the award for best selling doll ever, according to Mattel and Guinness World Records. She celebrated the loud fashions and big hair craze that continued into the 1990s. In fact, her hair that drapes all the way down to her toes is the longest ever featured on a Barbie.

Barbie enjoyed many rewarding and fulfilling careers, such as a fashion model, veterinarian, aerobics instructor, and even an Air Force pilot. But in 1992, she threw her pink hat into the ring and ran for President (under the “B” party). In 2012, African-American, Asian, Hispanic, and Caucasian Barbie dolls were created as presidential candidates, and in 2016, Mattel created an all-female ticket with a President Barbie and Vice President Barbie.

Barbie got a millennial head-to-waist makeover with a younger, fresh face and natural looking makeup. Her body changed too, with a bendable, flexible waist. She showed off her newly acquired athletic physique with a crop top that reveals her first ever belly button. The jewels were of the stick-on variety, allowing children to accessorize Barbie’s outfit or use on their own clothes. Find out every word coined the year you were born.

There’s no mistaking Barbie’s love for animals; she’s had cats and dogs as pets and has had many careers taking care of them, including a stint as a veterinarian. In 2006, she added zoologist to her ever-expanding resumé. Zoologist Barbie let girls explore their dreams of helping and nurturing wildlife species like pandas, koalas, lion cubs, exotic birds, and more.

Barbie and Ken started dating in 1961. But after 43 years of what seemed to be a perfect romance, the couple called it quits and parted ways peacefully, saying they needed to spend quality time apart. Barbie had a brief fling in 2004 with Blaine, an Australian surfer who briefly got Barbie’s attention, but not her heart. In 2011, she followed her heart back to Ken, and they reunited as the happy couple in the Barbie and Ken set. Here are 11 Barbie doll controversies you completely forgot about.

Moms rejoiced worldwide when Barbie announced the expansion of its Fashionistas doll line. A more realistic body type was a popular request, and Mattel answered with three new body types: tall, curvy, and petite. But the makeovers didn’t stop there, featuring new skin tones, eye colors, a variety of hairstyles, and more conservative outfits. Plus, for the first time, Barbie could kick off her heels—bendable ankles meant she finally rock a pair of cute flats!

According to Mattel, only 24 percent of today’s STEM (science, technology, engineering, and math) careers are held by women. Barbie has been a Computer Engineer, Video Game Developer, Mars Explorer, and Robotics Engineer. With more than 200 jobs on her resumé, she inspires girls of their limitless potential. Game Developer Barbie is ready to create the next video game sensation with a laptop (with real game code graphics), tablet, and headset. Check out these childhood toys that are worth thousands.

Barbie has been immortalizing role models in plastic for 61 years. In 2017, another role model was born in Ibthaj Muhammad Barbie, the first female Muslim-American Olympic fencing champion to wear a hijab (traditional headscarf). But it wasn’t just her athletic accolades that prompted this Barbie. For girls who never saw themselves represented, Ibtihaj embraces what makes her stand out and shows girls they don’t have to compromise their values or beliefs to achieve their goals. She is honored as a Barbie “Shero,” a woman who has broken boundaries to inspire the next generation of girls. Barbie dolls modeled after other real-life famous people are on display at the Barbie Museum.

Barbie’s official birthday is March 9, 1959. In the 61 years since, Barbie has ridden out controversies of body image, male oppression, and materialism, just to name a few, but she keeps rolling and evolving. “Barbie’s birthday represents a bigger loudspeaker to celebrate who we are and what we’ve achieved and hopefully create a movement where people become even more inspired by the brand,” said Richard Dickson, Mattel’s President and Chief Operating Officer, in Marketing Week. The six anniversary Barbie Dolls come in different skin tones, eye colors, hairstyles, body types, and careers to inspire and empower girls worldwide. Read on to find out the most popular toy from the year you were born.