Why Are Dogs So Scared of Fireworks?

The Fourth of July isn’t always fun for our four-legged friends. But a little understanding and the right type of comfort can go a long way toward helping them cope. 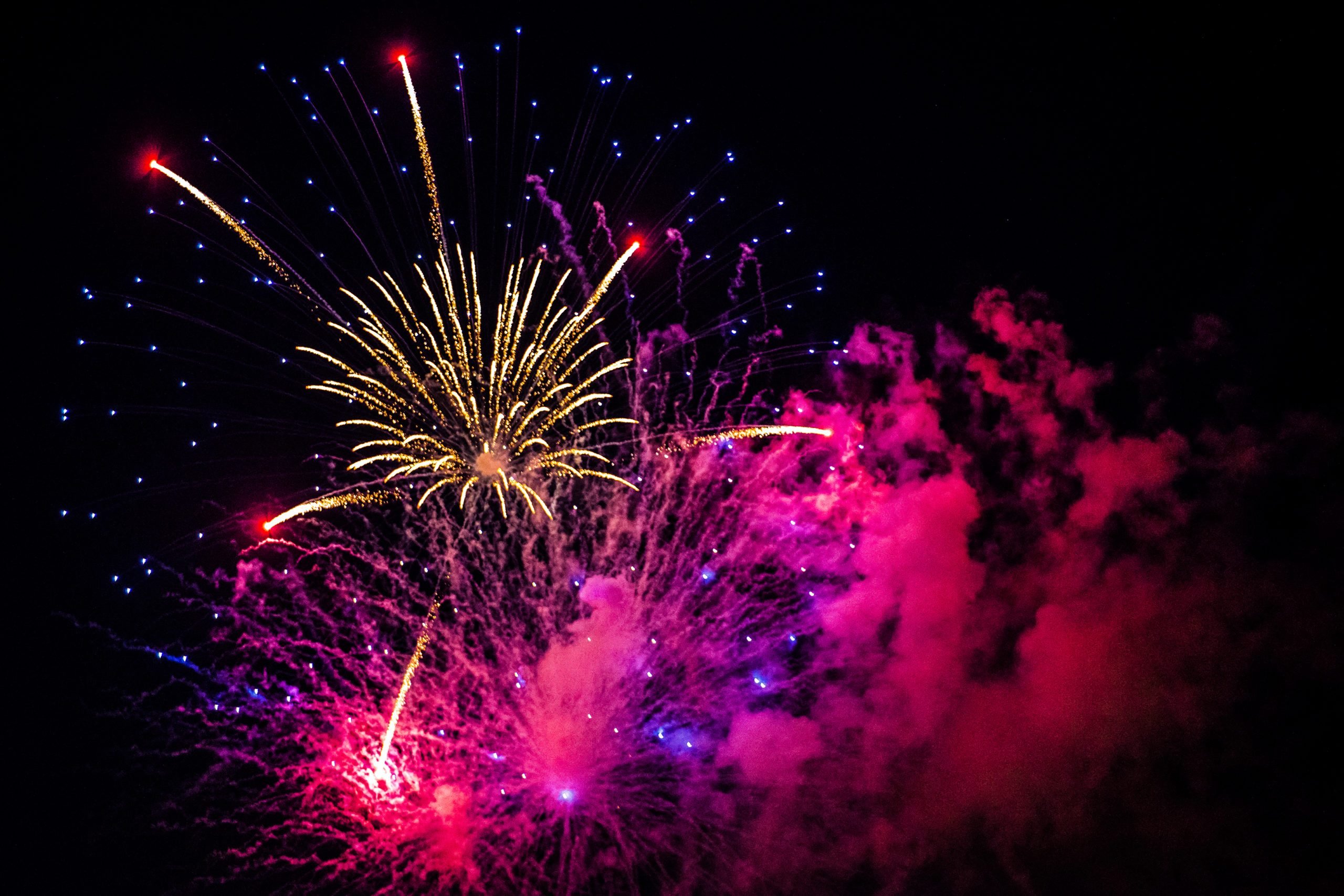 When fireworks aren’t a blast

With outdoor celebrations and yummy food, the Fourth of July, Memorial Day, and other holidays that feature fireworks are definitely something for us humans to get excited about. Our dogs, though? Not so much. Fireworks can strike fear in the hearts of even the bravest dogs, causing them to scamper off, hide, and shake the second the first pop goes off. Here’s why dogs are so scared of fireworks—and what experts say you can do to comfort them. Once you’re up to speed, learn the unexpected things that trigger dog anxiety. 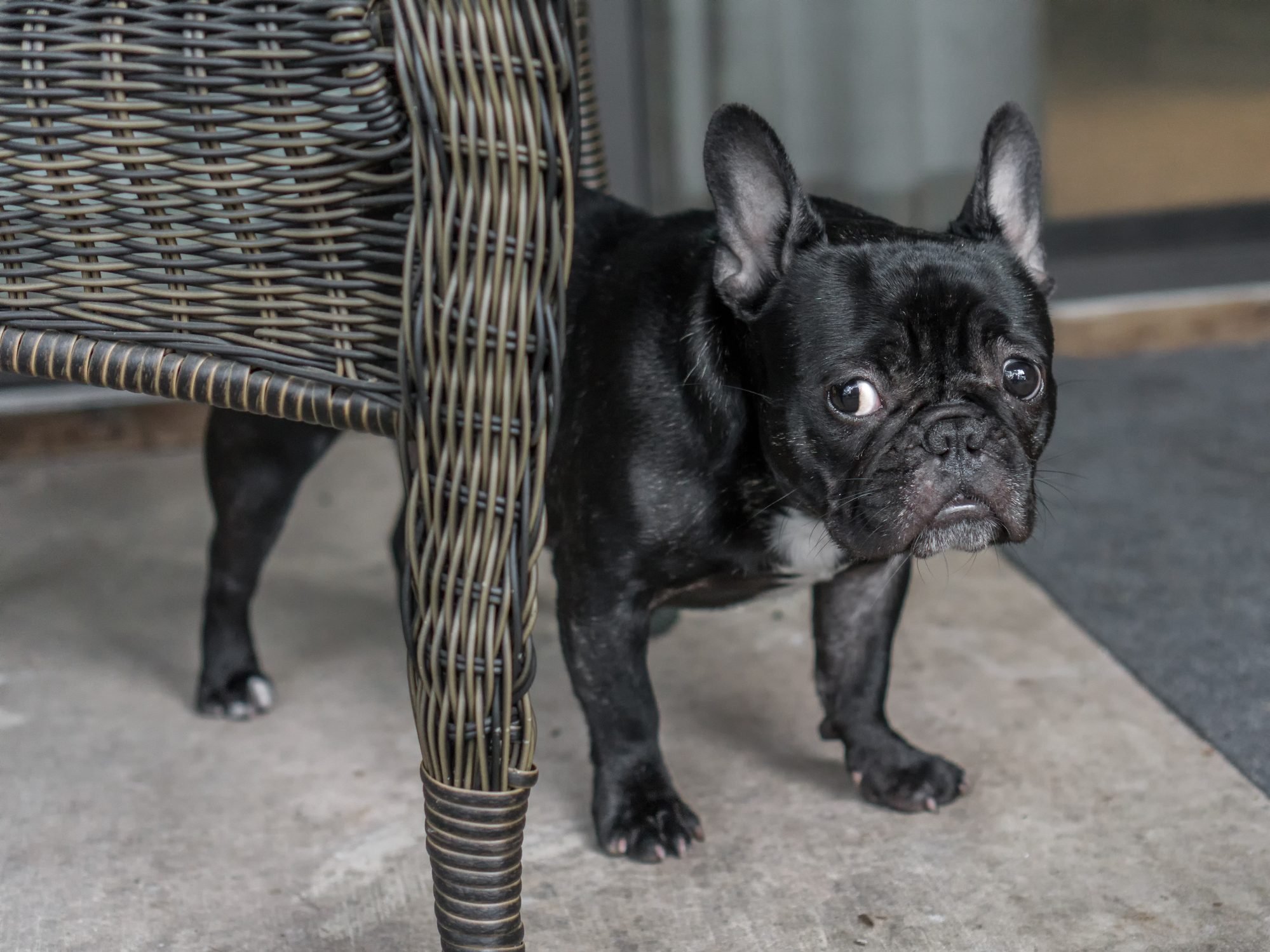 Why fireworks freak out dogs

Let’s start by answering the burning question (pun intended): Why do fireworks send our pups into a tizzy? Obviously, the loud sound is jarring, but dogs don’t react that way to all loud noises. So, what is it about firecrackers, specifically? “From your dog’s perspective, they’re not able to reason out where that noise is coming from or why that noise is happening,” says Gary Richter, DVM, a veterinarian and the founder of Ultimate Pet Nutrition. “To them, loud, unexpected noises—especially ones that can come from an unknown source—can be very disconcerting, as it could mean danger.” The booms, cracks, and pops trigger your dog’s fight-or-flight response, which can present in a number of ways.

In case you were wondering, here’s why your dog also freaks out in a thunderstorm. 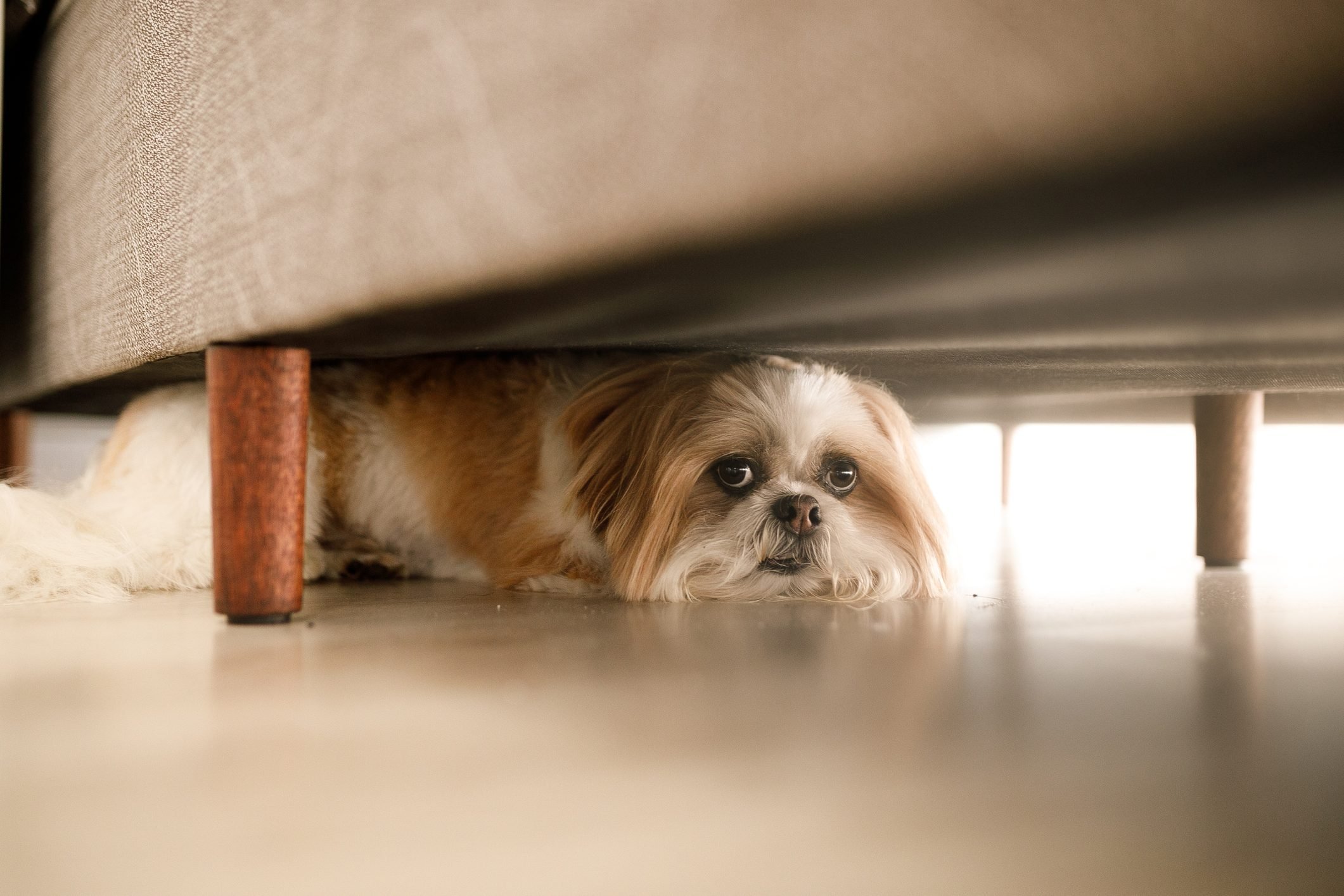 The fear can worsen over time

While you might think that hearing the same sort of noise over and over again would eventually cause your dog to relax, the opposite can actually happen. “Rather than becoming desensitized, a dog’s fight-or-flight reaction can be heightened boom after boom, or year after year,” notes Kwane Stewart, DVM, a veterinarian who’s been dubbed “the street vet” because he offers medical care to the pets of people experiencing homelessness. So, if it seems like your pup’s reaction to fireworks gets worse every year, you’re probably not imagining things. It’s kind of like how some dogs never get over hearing the vacuum cleaner. 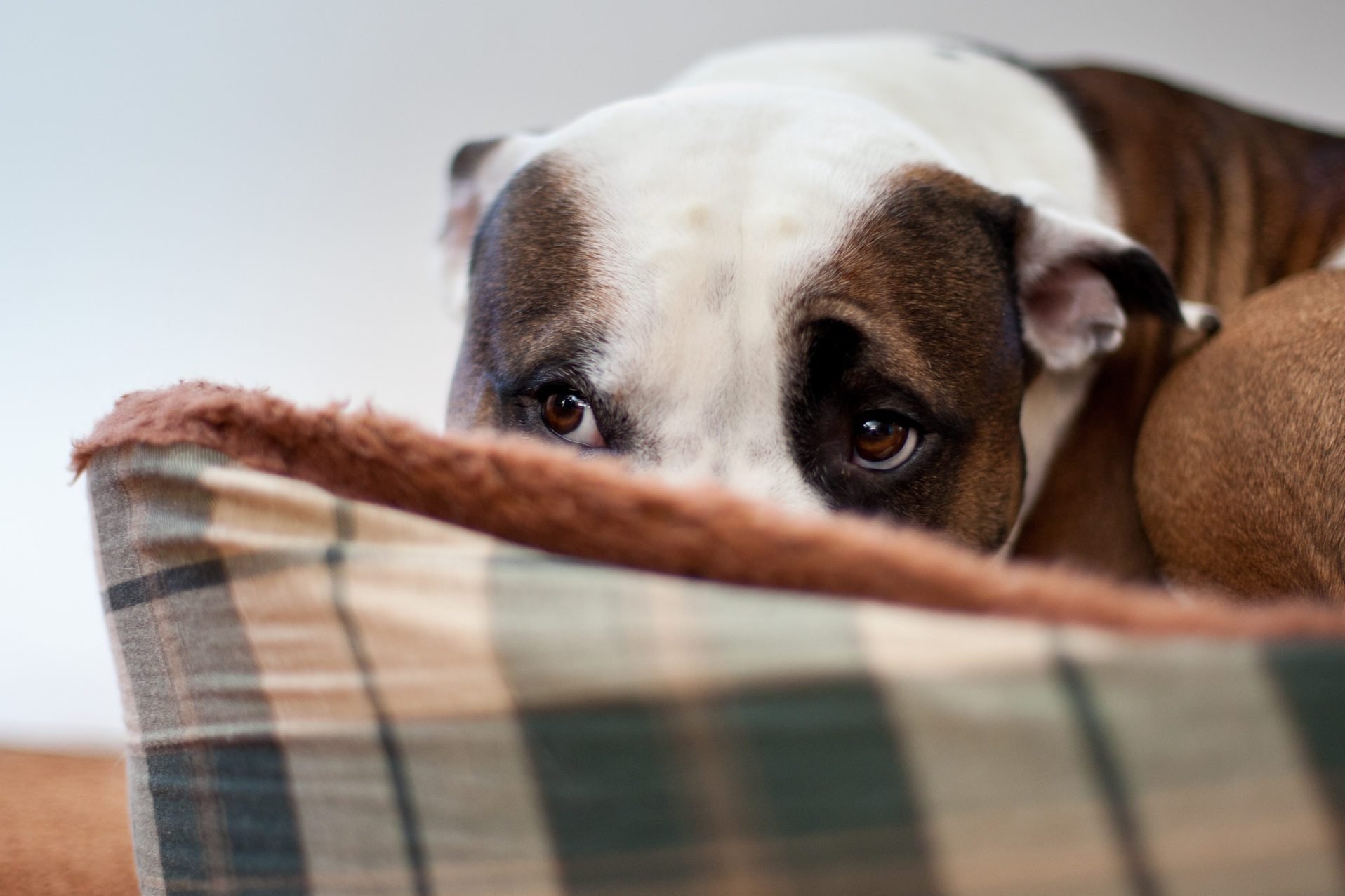 Clear signs your dog is afraid of fireworks

Sometimes it’s pretty obvious that your dog is exhibiting that fight-or-flight response as a result of hearing fireworks. Dr. Stewart says that clear or extreme signs include whining, barking, howling, shivering, and cowering. Other signs include hiding, pacing, panting heavily, or wanting to be right next to you and never leaving your side. Some dogs can even engage in destructive behavior to cope—such as destroying your belongings—or they may pee or poop inside. 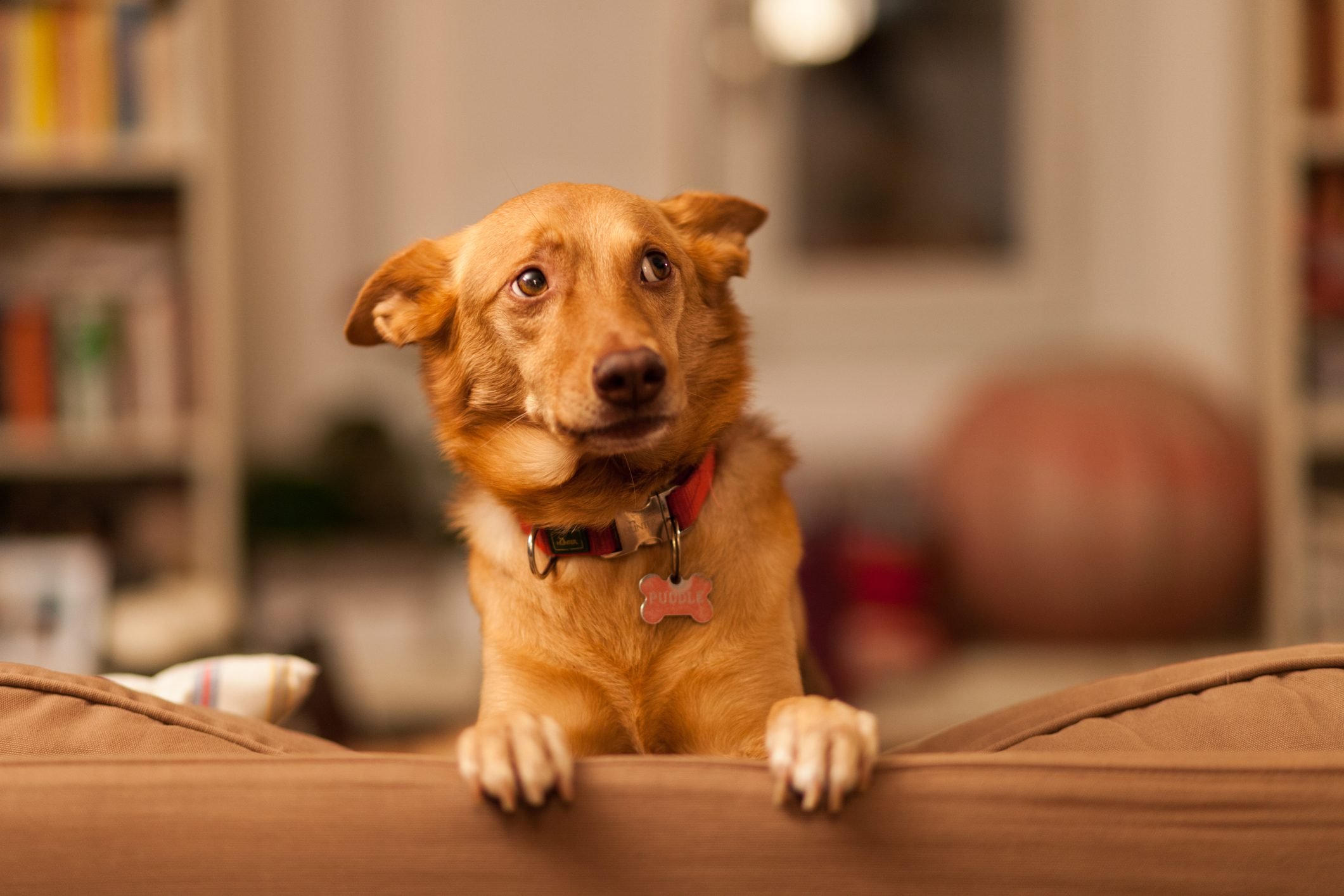 It’s not always clear, however, when dogs are feeling anxious, afraid, or stressed out from fireworks. Instead, Dr. Richter explains, they might exhibit more subtle signs, like sitting in a place they don’t usually sit, going to a room they usually don’t venture, or even hanging out in the corner. He adds that lip licking and frequent yawning can also be signs of anxiety.

“Every dog has a unique reaction to stress, and even though we sometimes brush it off as ‘Oh, he’s fine,’ simply because the signs are not obvious, we need to pay close attention to all cues,” Dr. Stewart adds. “In short, if your pet is not acting like their normal self during an event like this, it’s their way of saying something is wrong, and it’s worth mentioning to your vet.” Whether mild or extreme, prolonged exposure to stress is not healthy, and it can lead to future medical and behavioral problems. 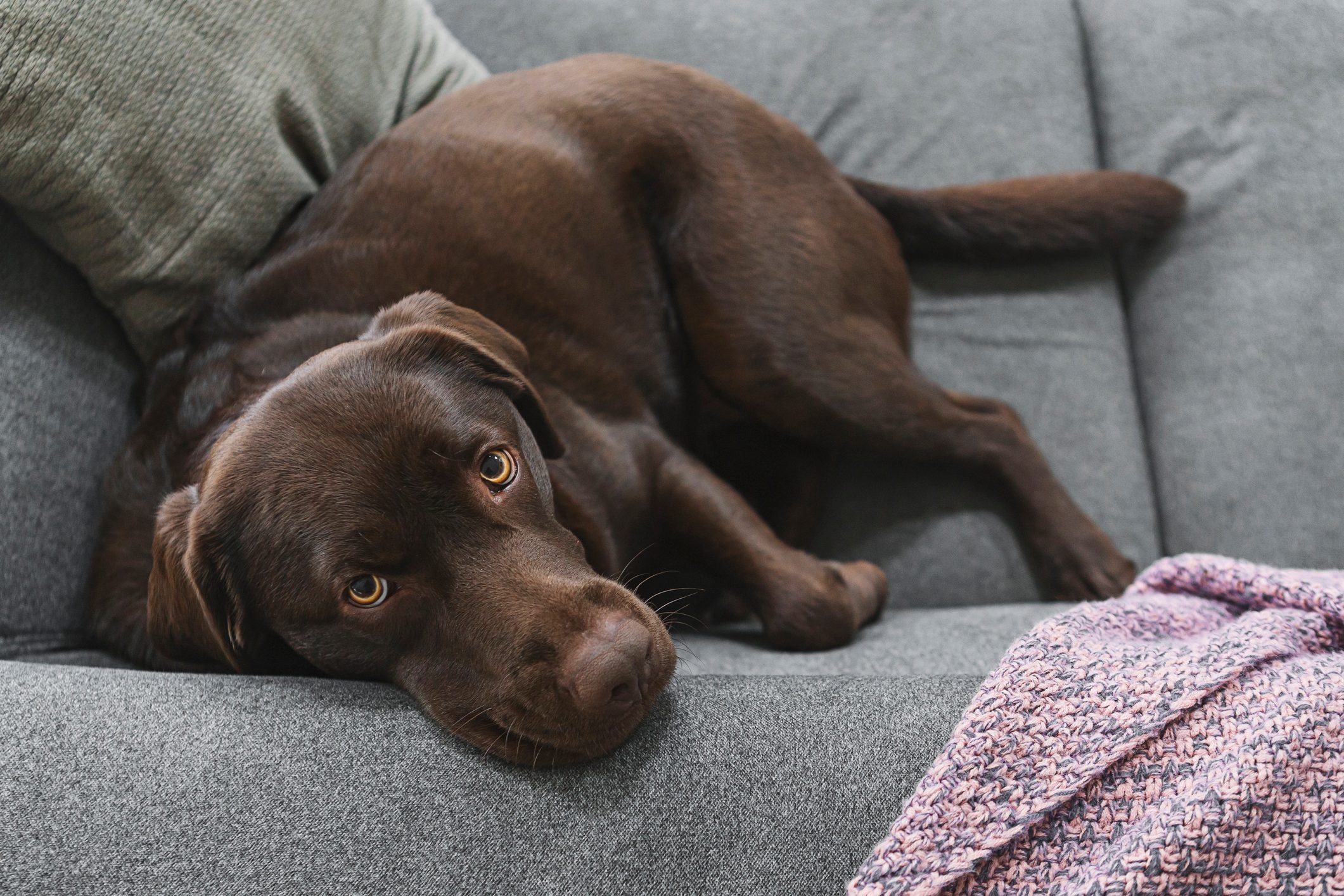 Limit your dog’s exposure to the noise

The best way to keep dogs from experiencing fear or anxiety from fireworks is to minimize how much popping and cracking they can actually hear. For example, if you live in a loud neighborhood, then it might be advantageous to head somewhere that’s going to be quieter that night, says Dr. Richter. Alternatively, Dr. Stewart suggests moving to a room in your house that’s away from windows and exterior walls and drowning out the sound with calming music or white noise during the fireworks. 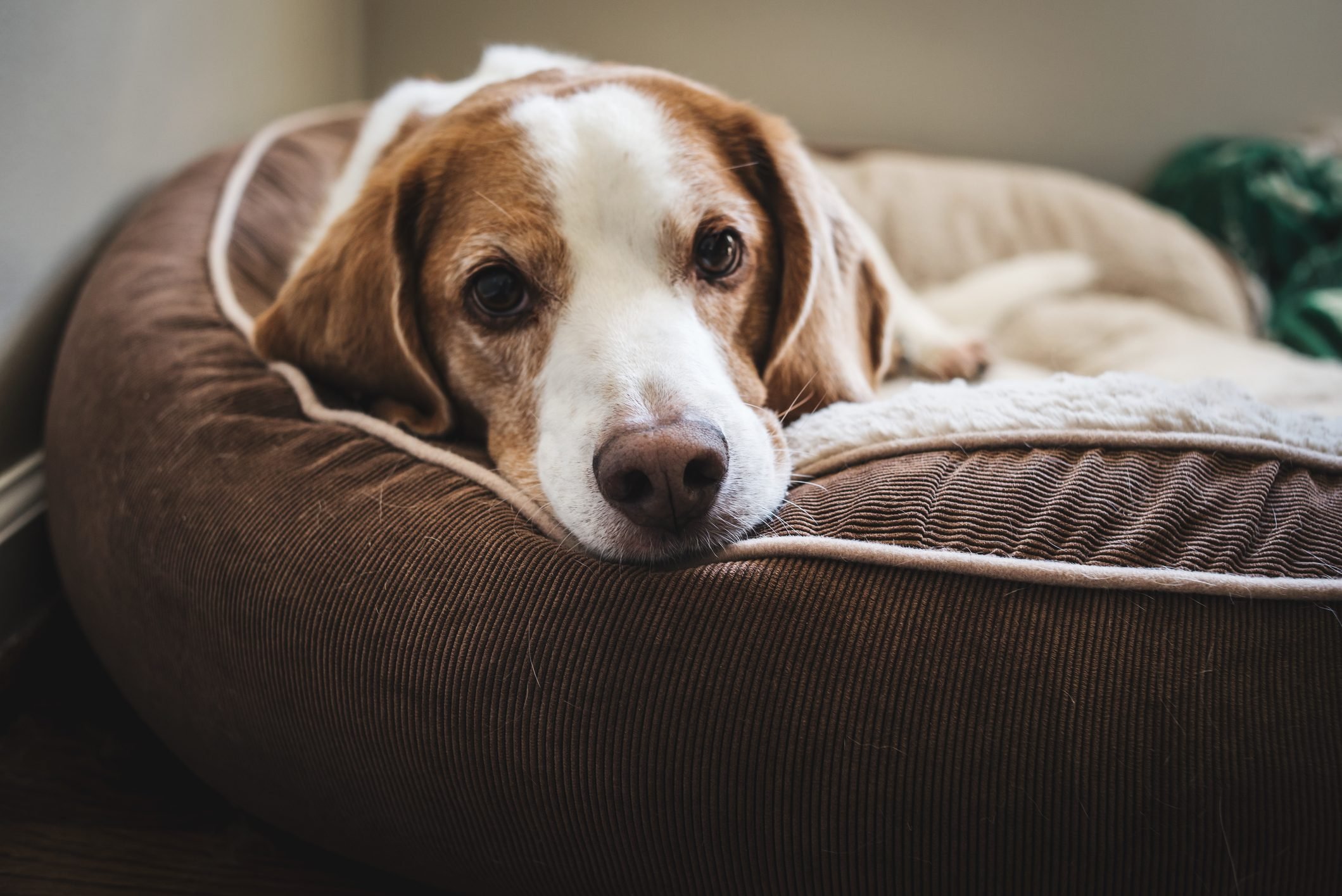 Create a safe and cozy environment

Another way to help dogs calm down during fireworks is to create a space that’s safe and cozy. This might mean bringing them into a room with their favorite blankets and toys and giving them some yummy treats. And it definitely means being patient with them—even if they bark or whimper for long periods of time and even if they have an accident inside. Giving them love and speaking to them in a calm and reassuring way is the best approach. “You can’t shake someone out of a panic attack, and you can’t talk a dog down from essentially the same thing,” says Dr. Richter.

Looking for a cozy place for your pup, fireworks or not? Try these 14 best dog beds for every type of dog. 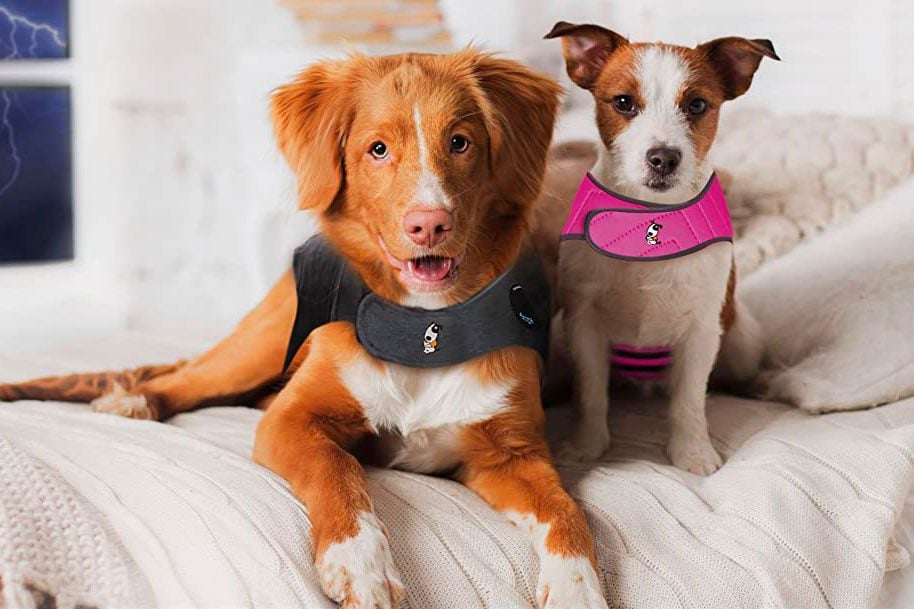 Try using a ThunderShirt to calm your dog

Dr. Stewart says that a calming vest, such as a ThunderShirt, can be beneficial for some dogs experiencing anxiety. “The pressure on their body can release natural hormones and endorphins that are calming,” he explains. If you’re interested in learning more about how they work, check out this story about a woman whose dog had awful anxiety until she tried a ThunderShirt. 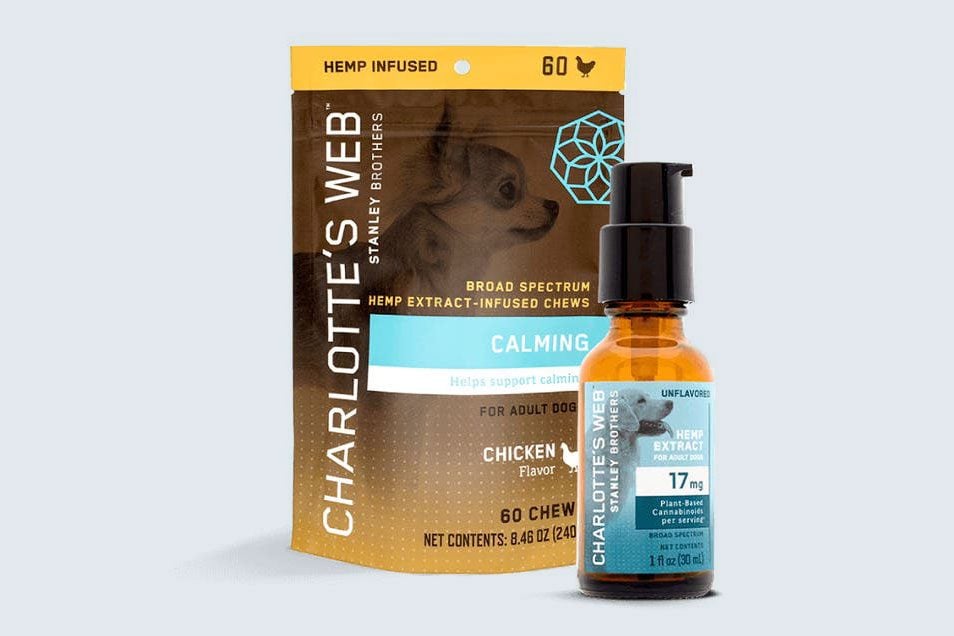 Consider soothing your dog with CBD

“CBD has shown positive signs of promoting calm in pets,” says Dr. Stewart. “I always advise checking with your own veterinarian before using these products, but some that might be particularly helpful this time of year and are certified by the National Animal Supplement Council include Charlotte’s Web Pet Calming Chews, which have full-spectrum hemp extract (2.5mg CBD per chew) in an easy-to-administer chicken flavor.”

As an alternative to CBD, you could try natural or pharmaceutical treatments that are intended to help your dog stay a little calmer, such as Ultimate Pet Nutrition’s Canine Comfort chewable tablets. Whatever you choose, Dr. Richter says it’s important to administer in advance of the fireworks, versus during, as a preventative measure. Don’t miss these other 12 products that could help your dog’s anxiety.

Wendy Rose Gould
Wendy Rose Gould is a freelance lifestyle reporter covering pets for Reader's Digest, Healthy Paws Pet Insurance, and Rescue Pop. She's also a regular contributor to NBC, Real Simple, Brides, Business Insider, and other outlets. Based in Phoenix, Arizona, by way of the Indiana countryside, Wendy holds a journalism degree from the Franklin College Pulliam School of Journalism and another bachelor's degree in Philosophy. Follow her on Instagram or Twitter @wendyrgould.