On revisiting the royal wedding of the Duke and Duchess of Cambridge on April 29, 2011, we discovered lots of things we'd missed the first time around. 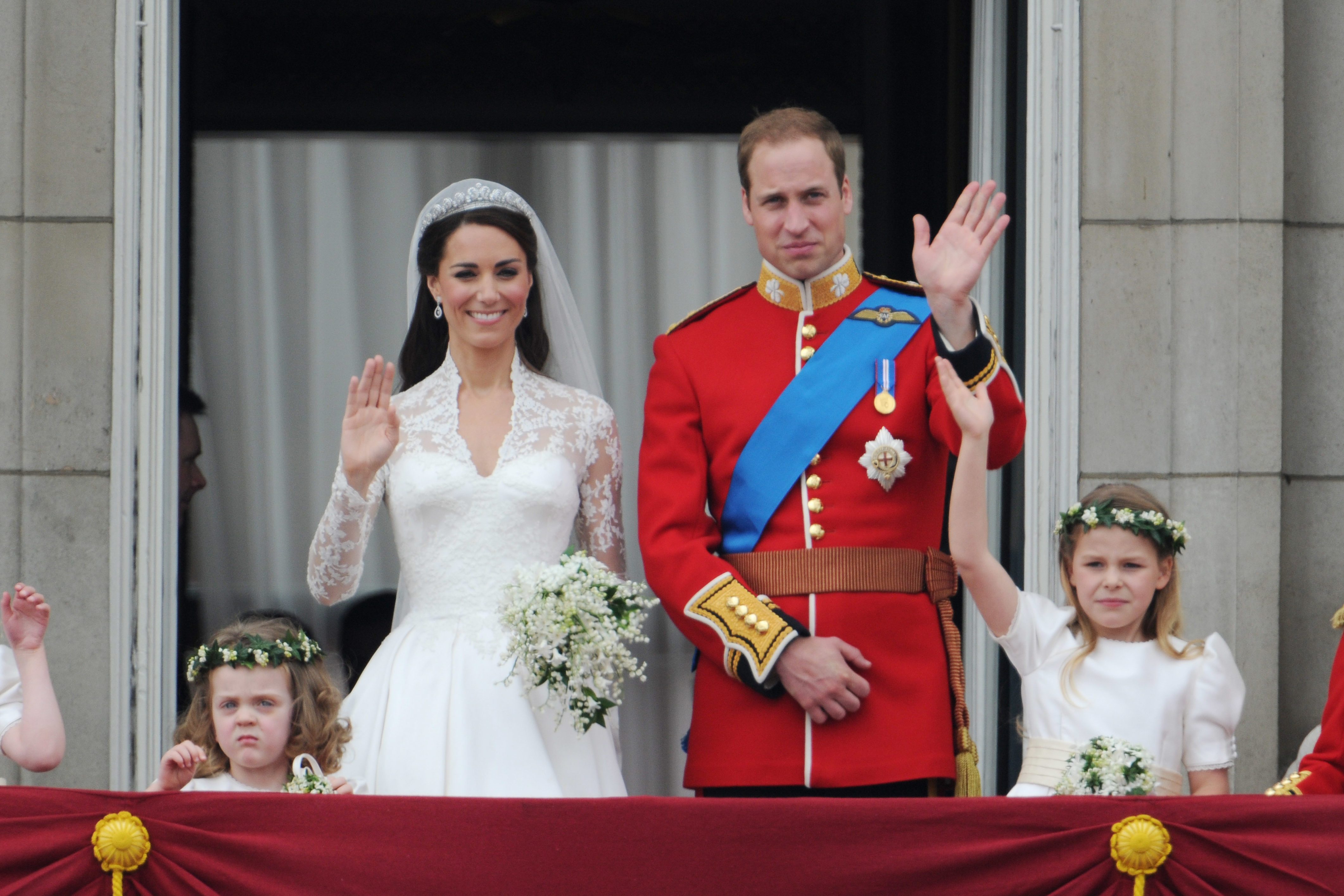 Years before Prince Harry and Meghan Markle’s stunning nuptials in 2018, the world was abuzz with the wedding of the future king of England, Prince William, and Catherine Middleton. The college sweethearts got married in Westminster Abbey on April 29, 2011, in front of more than 160 million viewers. And plenty of those viewers likely didn’t catch all the sweet moments, funny goofs, and even mishaps that took place amid the spectacle.

The groom was “shattered” (in a good way)

If Prince William seemed a bit off his game as he embarked on an unannounced walkabout (the royal version of a meet-and-greet) outside Buckingham Palace the day of the wedding, it’s because he was utterly “shattered” (as the British call being completely exhausted) from lack of sleep. Due to his own nervousness, and the giddiness of the crowd outside London’s Clarence House (where he stayed the night before the wedding), William slept about a half an hour. Here are some fun facts you never knew about Prince William.

The best man may have had a bit of a limp

If it appeared that William’s best man, his younger brother Prince Harry, was walking with a bit of a limp, it’s because he was. At 3 a.m., just eight hours before the wedding ceremony began, Harry exited the nuptials-eve festivities taking place at the Goring Hotel by jumping out of one of the hotel’s balconies. Reports say he landed badly on his ankle. Ouch.

Young bridesmaid Eliza Lopes, the granddaughter of Camilla Parker-Bowles, the Duchess of Cornwall, refused to relinquish a bright pink fuzzy worm-like toy, even for the official photos. Where did that worm come from in the first place? Camilla later remarked that she had been “terribly worried” in advance of the big day that the wedding would be overwhelming for Eliza and the other young children in the wedding party. So it was fun-loving Harry to the rescue. Apparently, he took his stepmother’s concerns to heart and came prepared. When Eliza appeared to be frightened by the roar of the crowds outside Westminster Abbey, he pulled the toy out of his pocket to distract the young girl. Trouble is, Eliza liked the toy so much, she couldn’t be persuaded to put it down for the photos. Here are some more of the funniest royal wedding moments caught on camera.

The bride opted for modern transport

Kate Middleton decided against riding in the Glass Coach, the royal carriage that had been traditionally been used to transport brides to the ceremony, including Diana, Princess of Wales as well as Queen Elizabeth II. Her choice was a 1997 Rolls-Royce Phantom VI. These are the fragrances Kate, Queen Elizabeth, and Meghan Markle wore on their wedding days.

The early birds got the good seats

All non-royal guests were instructed to arrive as early as 8:15 a.m. for the 11 a.m. ceremony, and no exceptions were made. That means even famous guests, including Sir Elton John and David and Victoria Beckham, arrived hours early.

Catherine wore a tiara designed by Cartier, known as the “Halo Tiara” or the “Scroll Tiara.” The tiara, which was loaned to her by Queen Elizabeth, was originally given to Elizabeth on her 18th birthday by her mother. Her mother had received it as a gift from her husband, King George VI, in 1936. Get a look at these photos of Kate Middleton’s stunning transformation since meeting Prince William and becoming a royal.

The significance of the bride’s bouquet

For the ceremony, the bride carried a bouquet of lily-of-the-valley, sweet William, ivy, myrtle, and hyacinth. Two of those flowers had special significance—one, sweet William, for obvious reasons. The other—myrtle—has been a royal wedding tradition since the wedding of Princess Vicky (the eldest daughter of Queen Victoria and Prince Albert), according to the official website of the royal family. Myrtle, which represents love, fertility, and innocence, has been grown on royal grounds since 1845 when Prince Albert’s grandmother gave Queen Victoria her first myrtle plant. Get a look at some of the most iconic royal wedding photos from 1863 to today.

The whereabouts of that bouquet

The royal family’s official website tells a touching story of how in 1923, the Queen’s mother laid down her bouquet at the Tomb of the Unknown Soldier at Westminster Abbey before she walked down the aisle, bouquet-less, to marry her husband, Bertie (later, King George VI). “The gesture was in remembrance of her own brother, Fergus, who died at the Battle of Loos in 1915 and to pay tribute to the millions of others killed and injured in World War I.” No other royal bride has walked down the aisle bouquet-less since, but many, including Kate Middleton, have left their bouquet on the tomb during the recessional. Check out more facts even royal buffs might not know about past royal weddings.

Following royal tradition, the wedding ring Prince William placed on Kate’s finger during the ceremony had been fashioned from a nugget of Welsh gold. It was not, however, made of the same nugget of Welsh gold from which the Queen’s own wedding band and those of her mother, sister, and daughter, as well as Diana, Princess of Wales. There wasn’t enough left of that nugget to make a ring for the Duchess of Cambridge. Plus, learn about the surprising history of Kate’s engagement ring!

The Duchess of Cambridge, who is expected to be one of her husband’s royal subjects one day when he is king, did not vow to obey him during the vows portion of their wedding ceremony. It’s not the first time (that was Diana, Princess of Wales, during her wedding to Prince Charles), nor the latest (that was Meghan Markle during her wedding to Prince Harry), but it’s still not the norm for royal brides. For example, Sarah Ferguson vowed to “obey” Prince Andrew at their 1986 wedding. Prince William did, however, make this sweet promise to Kate before the wedding.

The quiet nod to Diana, Princess of Wales

Though she didn’t want to ride in the Glass Coach to the ceremony, the Duke and Duchess of Cambridge traveled to Buckingham Palace for the Queen’s luncheon reception in the horse-drawn carriage that transported Charles and Diana during their 1981 wedding. Originally built for King Edward VII in 1902 for his coronation, it is used often by the Queen to meet with foreign heads of state. Get a look at these rare photos of Diana and Charles’ wedding.

The post-ceremony procession hit a SNAFU

Five horse-drawn carriages transported the wedding party to Buckingham Palace, as well as numerous horses who were ridden by their well-practiced riders. That didn’t stop one of the horses from getting spooked and throwing his rider to the ground while the Cambridge newlyweds looked on in shock. No one was injured, thankfully, so it didn’t quite make the ranks of these biggest royal wedding scandals.

Upon arriving at Buckingham Palace, the wedding party gathered on a balcony to greet the public. It’s always a memorable moment, but in this case, it was even more memorable thanks to one of the young bridesmaids, Grace Van Cutsem, Prince William’s goddaughter, who was three years old at the time. “Who could forget that face?” asked Town & Country of the tiny bridesmaid who clearly was not amused by all the noise. “She fully stole the show with her scowl, covering her ears.”

Putting on the brakes

After the reception, the bride and groom drove off to their next reception (at Clarence House, hosted by Prince Charles) in an Aston Martin DB6 belonging to Prince Charles. Unfortunately for the Aston Martin, William, who was driving, forgot to release the hand brake. No great damage was done.

Catherine changed into a second dress for the evening reception

For the wedding ceremony, the Duchess of Cambridge wore a dress designed by Sarah Burton for Alexander McQueen made of silk organza and tulle that hinted at the Victorian tradition of corsetry. For the evening reception, Kate changed into a second dress, also designed by Burton for McQueen. This dress was also white, but with a strapless neckline and shorter train, it was better suited for the more relaxed atmosphere of the evening festivities reception. Kate wore it with a bolero. Read on for the 18 tiny details you may have missed at Prince Harry and Meghan Markle’s 2018 wedding.