13 Words That Can Be Pronounced Two Ways

Have you ever wondered the proper way to pronounce "leisure"? What about tuh-MAY-toe, tuh-MAH-toe? Learn about these words and more, explained by an editor. 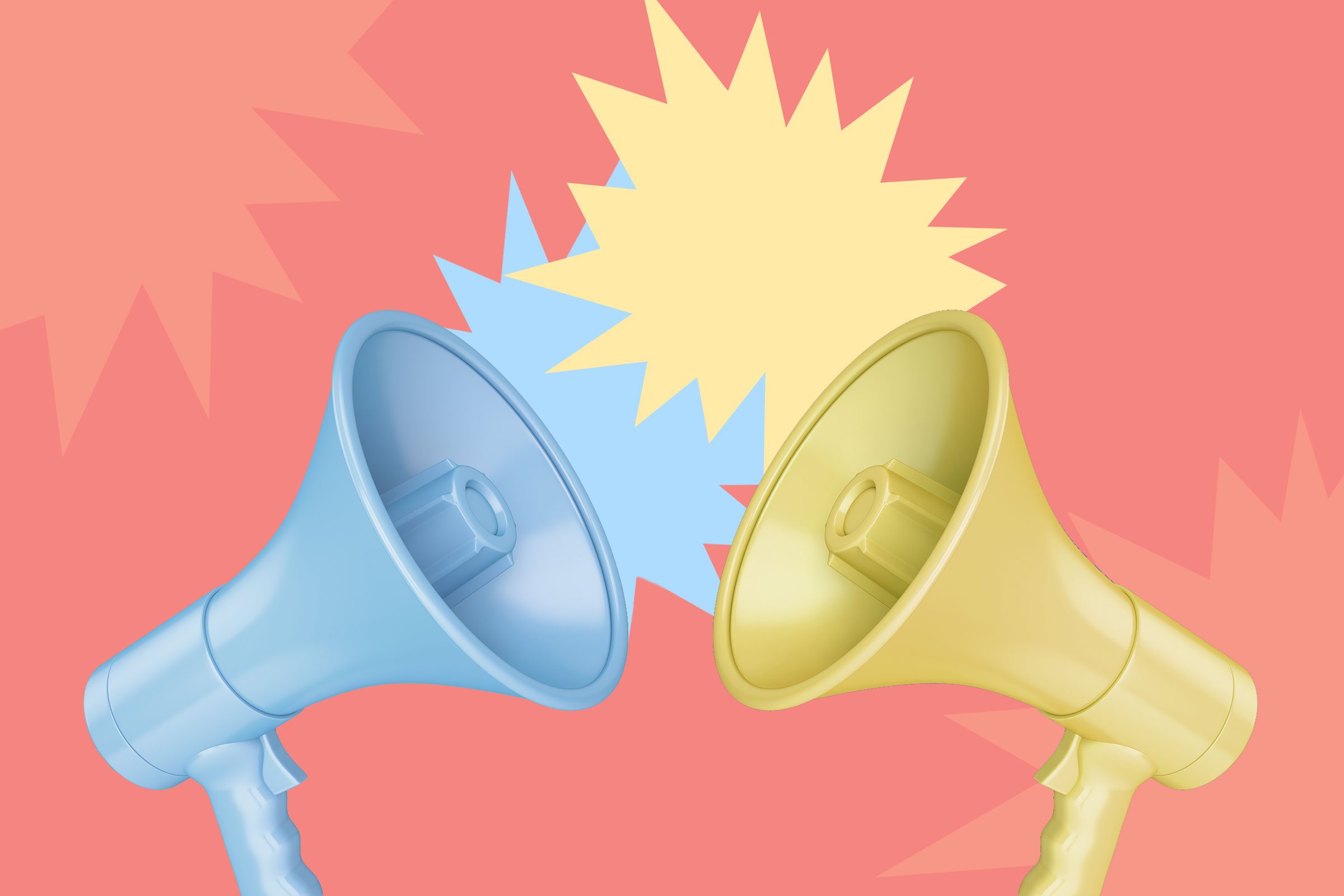 We aren’t talking about homonyms (same spelling but different meaning); homophones (same pronunciation but different meanings, origins, or spelling); nor homographs (same spelling but not necessarily pronounced the same and having different meanings and origins). Rather, we’re investigating words with a single intended meaning that can be properly pronounced in two or more well-documented ways. Keep in mind that this is not about regionalisms or heteronyms, which are defined as two or more words that are spelled identically but have different sounds and meanings (like tear from your eye and tear a sheet of paper).

To learn more about these types of mystery words, Reader’s Digest spoke to Charles Harrington Elster, the Yale-educated pronunciation editor for Black’s Law Dictionary, consultant for Garner’s Modern English Usage, and author of What in the Word? “As the author of a book titled There’s a Word for It, I wish there were a word for [these word pairs]. But unfortunately, I’m not aware of one,” he said. Elster offered up a solution: “The best I’ve been able to come up with as a label or term for these words is ‘pronunciation pugilists’ or ‘pugilistic pronunciations,’ which can be shortened to the snappier ‘pugiprons.'”

So let’s dive into some common pugiprons. Want even more wordy brain busters? Check out our 14 Jeopardy! grammar questions that would stump your English teacher. 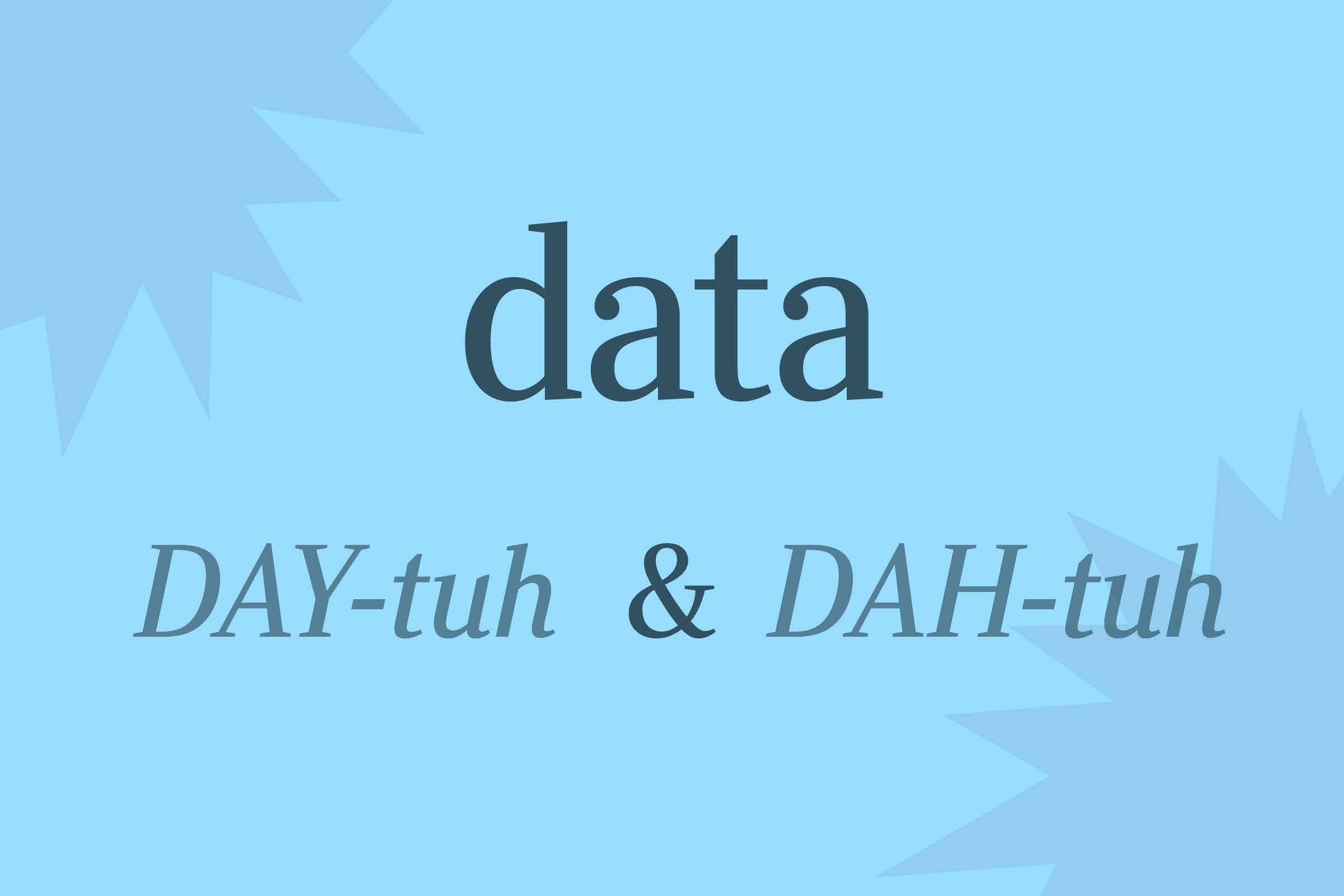 Data, which is defined by Dictionary.com as “individual facts, statistics, or items of information,” can be pronounced as DAY-tuh or DAH-tuh. Elster shares that there’s a general rule in English pronunciation where if the word comes directly from Latin (as “data” does) and the stressed syllable ends in a vowel, then the vowel should have its long English sound. Thus, DAY-tuh, not DAT-uh (the stressed syllable is not “closed” as dat-a but rather open: da-ta). Find out the 20 words that even smart people mispronounce. 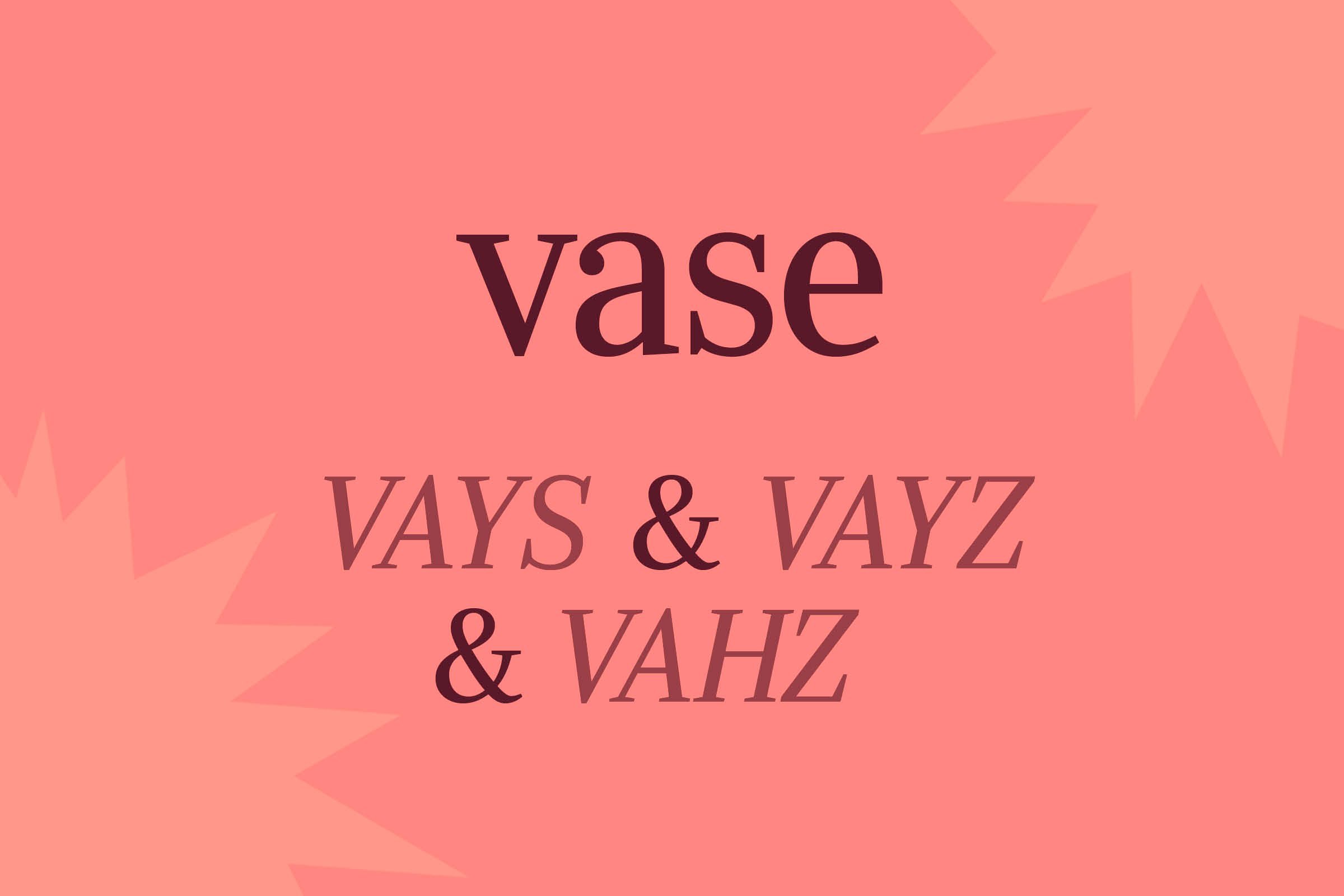 This is an exciting three-way pugipron. Should you say VAYS (rhymes with “lace”), VAYZ (rhymes with “haze”), or VAHZ (rhymes with “Oz”)? In Critical Pronouncing Dictionary (1791), the famed English elocutionist John Walker declared “VAHZ” “too refined for the general ear,” Elster shares, although it remains the preferred British pronunciation. (A fourth variant, VAWZ, is also British and overrefined.) Elster continues, “As an American speaker you have to choose between VAYS and VAYZ. The latter is venerable but the former is the dominant pronunciation, used since the days of Noah Webster.” For more pronunciation pointers, check out 14 hard words to pronounce in the English language. 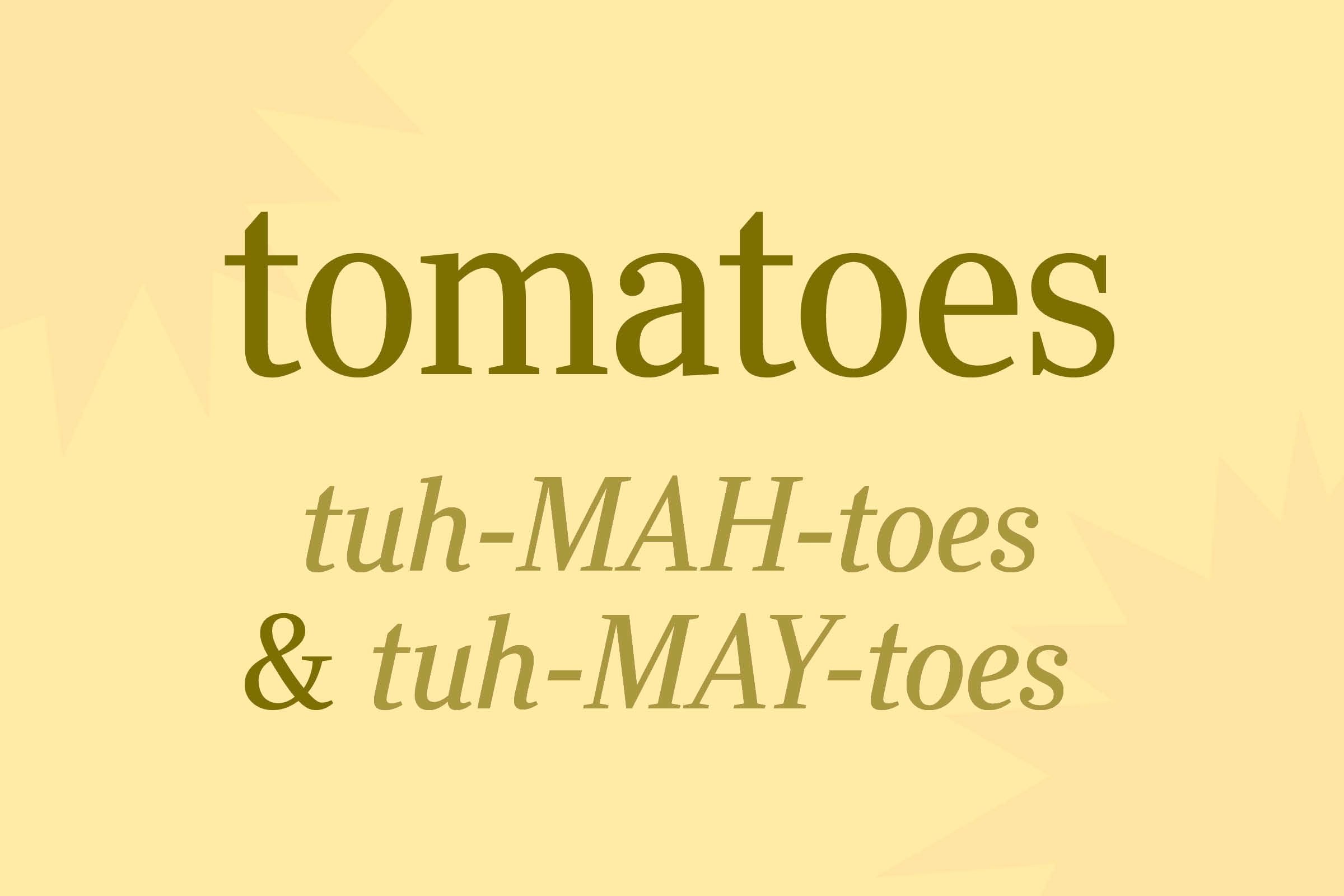 According to Elster, “New Englanders will live free or die over this one. Like my mother, who hailed from Massachusetts, Yankees love their tuh-MAH-toes. The rest of us, however, love our tuh-MAY-toes.” He continues, “The Yankees (and some Southerners) are on the wrong side of the Revolutionary War on this one, but the rest of us will forgive the transgression.” That means that the Yankee pronunciation can be tied to the British pronunciation, while most Americans accept the tuh-MAY-toes version. For more across-the-pond wordplay, check out why Brits and Americans spell words like “color” differently. 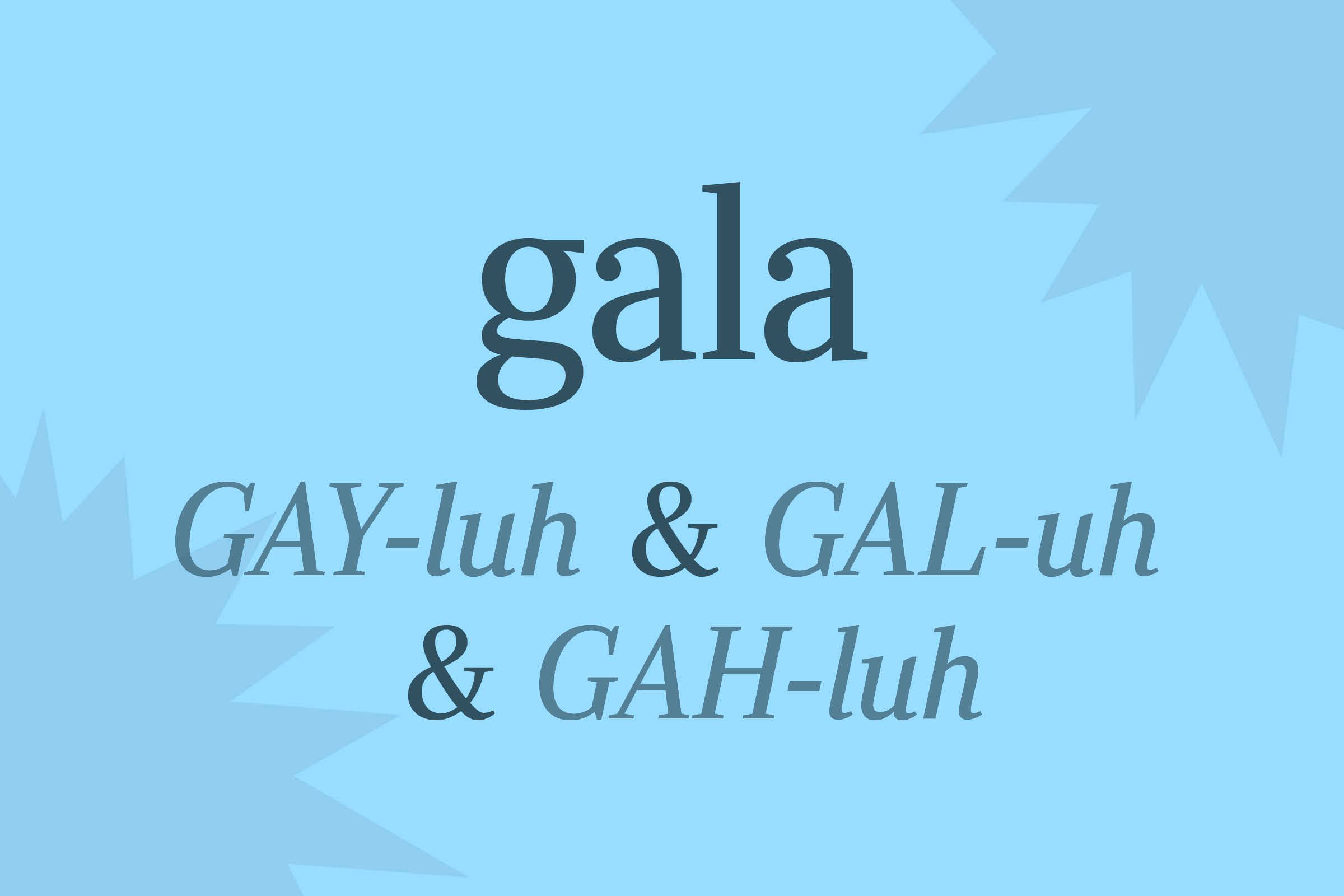 Is it GAY-luh, GAL-uh, or GAH-luh? As with “data,” there is a stressed syllable ending in a vowel, so the vowel sound should properly be long. Thus, GAY-luh has long been the preferred pronunciation. The other two variants have been recorded since roughly the 1930s. GAL-uh, though standard, is an American affectation, and GAH-luh is British. Are you a bit of an Anglophile, aka someone who is obsessed with British culture? Read these 30 British phrases that always confuse Americans. 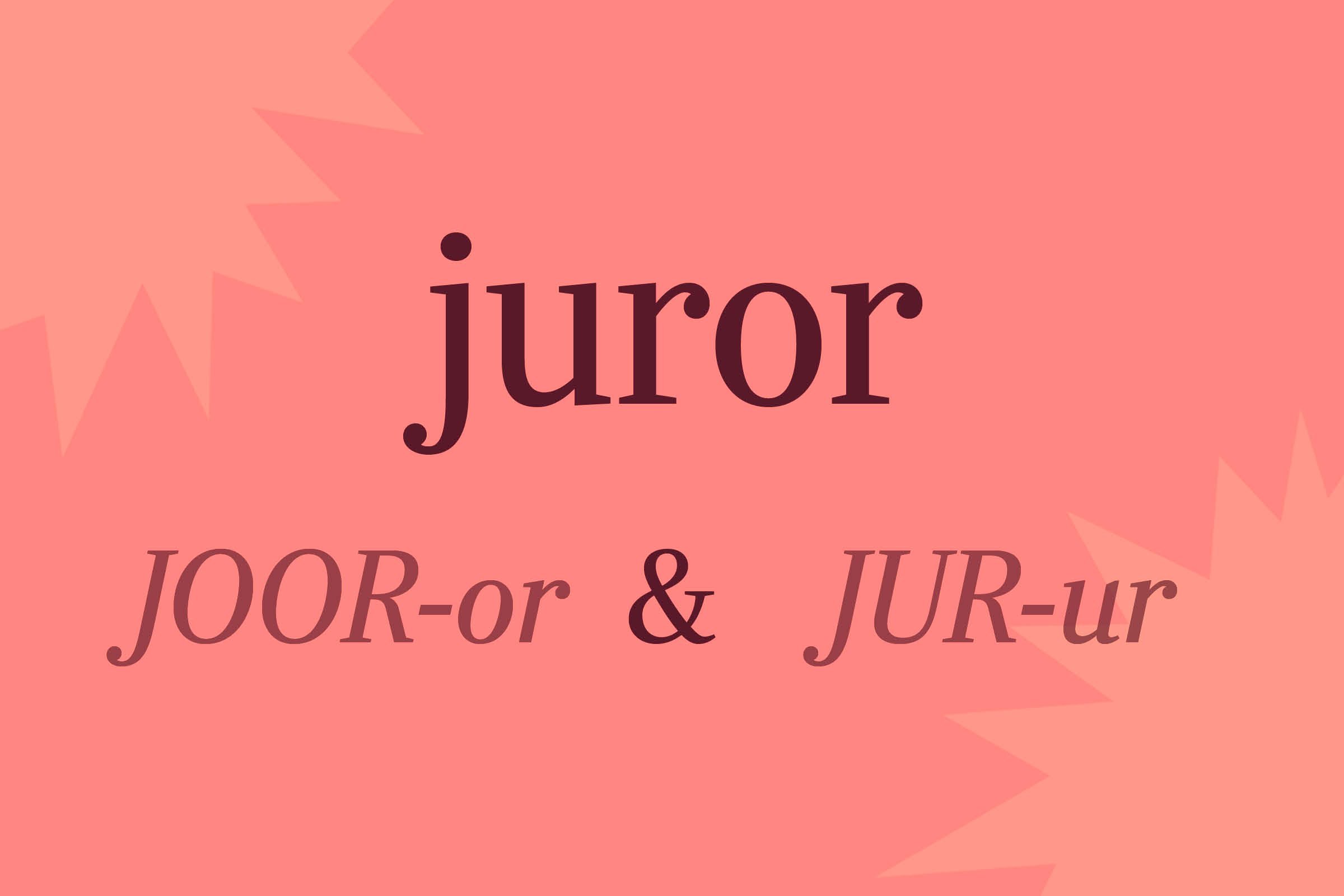 Lawyers and judges love to over-pronounce, Elster says, such as when they call a defendant a dee-FEN-dant, rhyming the last syllable with “can’t.” He also points to their strange penchant for pronouncing the unstressed suffix /-or/ like “or” instead of /-ur/, which is the way the rest of us say it. For jurists, a “vendor” isn’t a VEN-dur but a VEN-dor (as in “door”), and a juror has to be a JOOR-or rather than a JUR-ur. This is pure affectation, according to Elster. 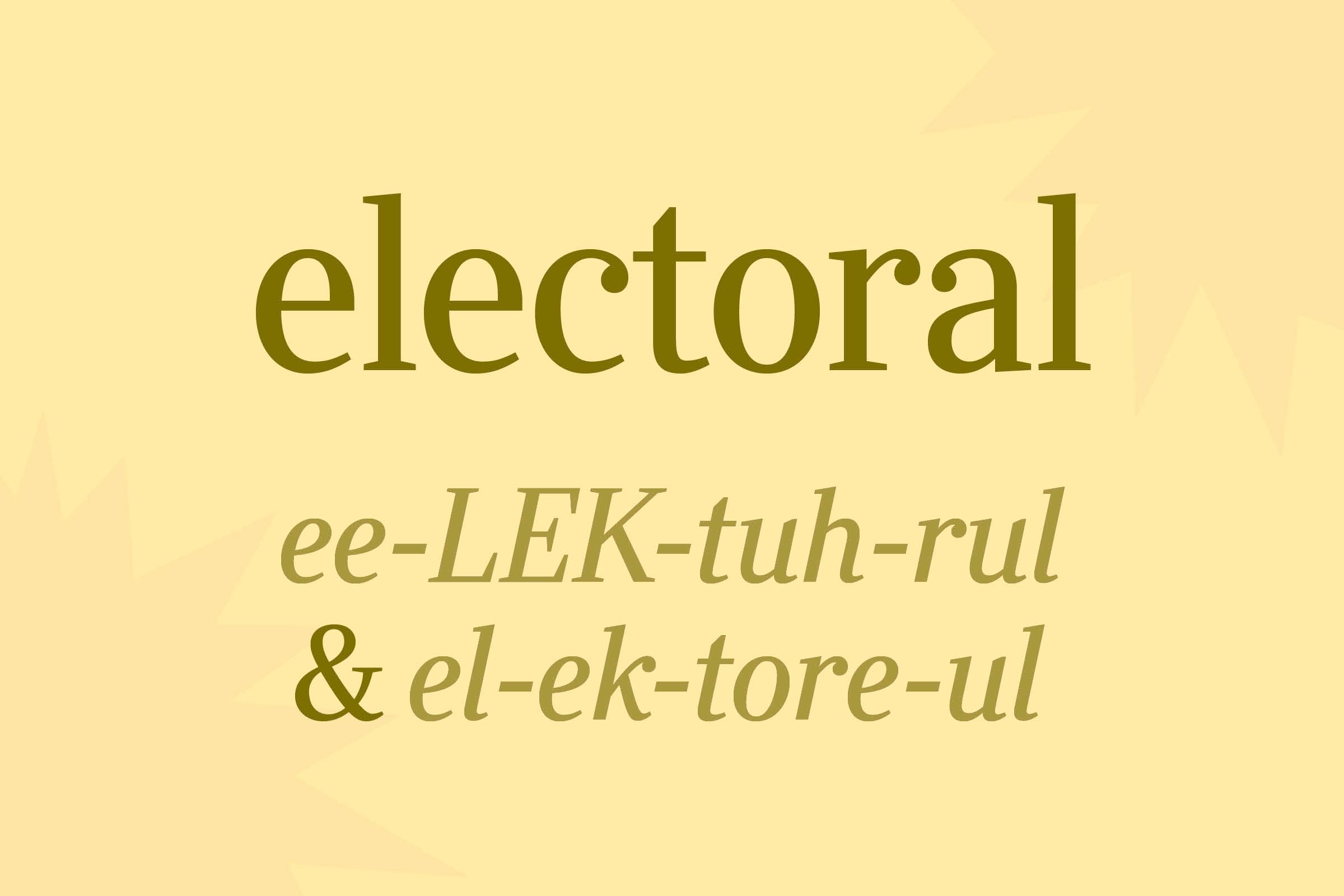 “American speakers have developed an ‘oral’ problem, as yet unidentified by dentists—and it has caused a stress fracture in a number of words,” Elster jokes. So where do you put the stress in “electoral,” “pastoral,” “pectoral,” and “mayoral?” If it’s on “OR-al,” you have joined the fraternity of uncultivated speakers—which, if it makes you feel better, admits almost anyone, according to Elster. For about 30 years the trendy “OR-al” variants have been overtaking the traditional pronunciations of these words: ee-LEK-tuh-rul, PAS-tuh-rul, PEK-tuh-rul, and MAY-uh-rul. Elster quips, “I urge you to practice good oral hygiene and eschew these vogue pronunciations with the stress on /-or/.” These are the words (and phrases) you’re probably using all wrong. 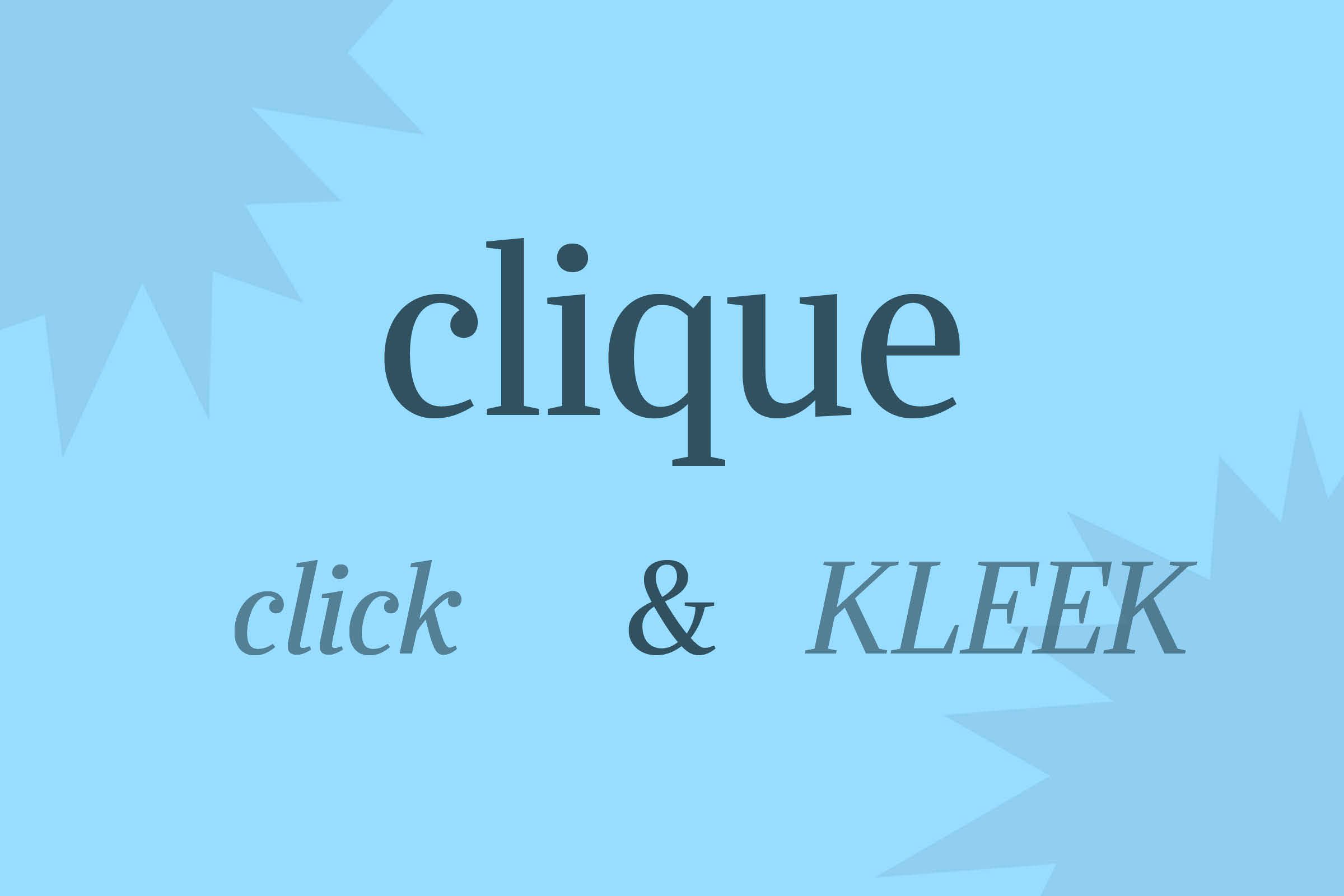 Do you say this word, defined by Dictionary.com as “a small, exclusive group of people,” like “click” or rhyme it with “sleek”? Elster explains that since the 1970s many Americans have pronounced it “click,” but the preferred pronunciation among cultivated speakers who know the French origin of the word remains KLEEK. He shares that it’s comparable to “chic,” which the uninformed pronounce CHIK and the cognoscenti pronounce SHEEK. You’ll get a laugh from these foreign words that sound rude in English. 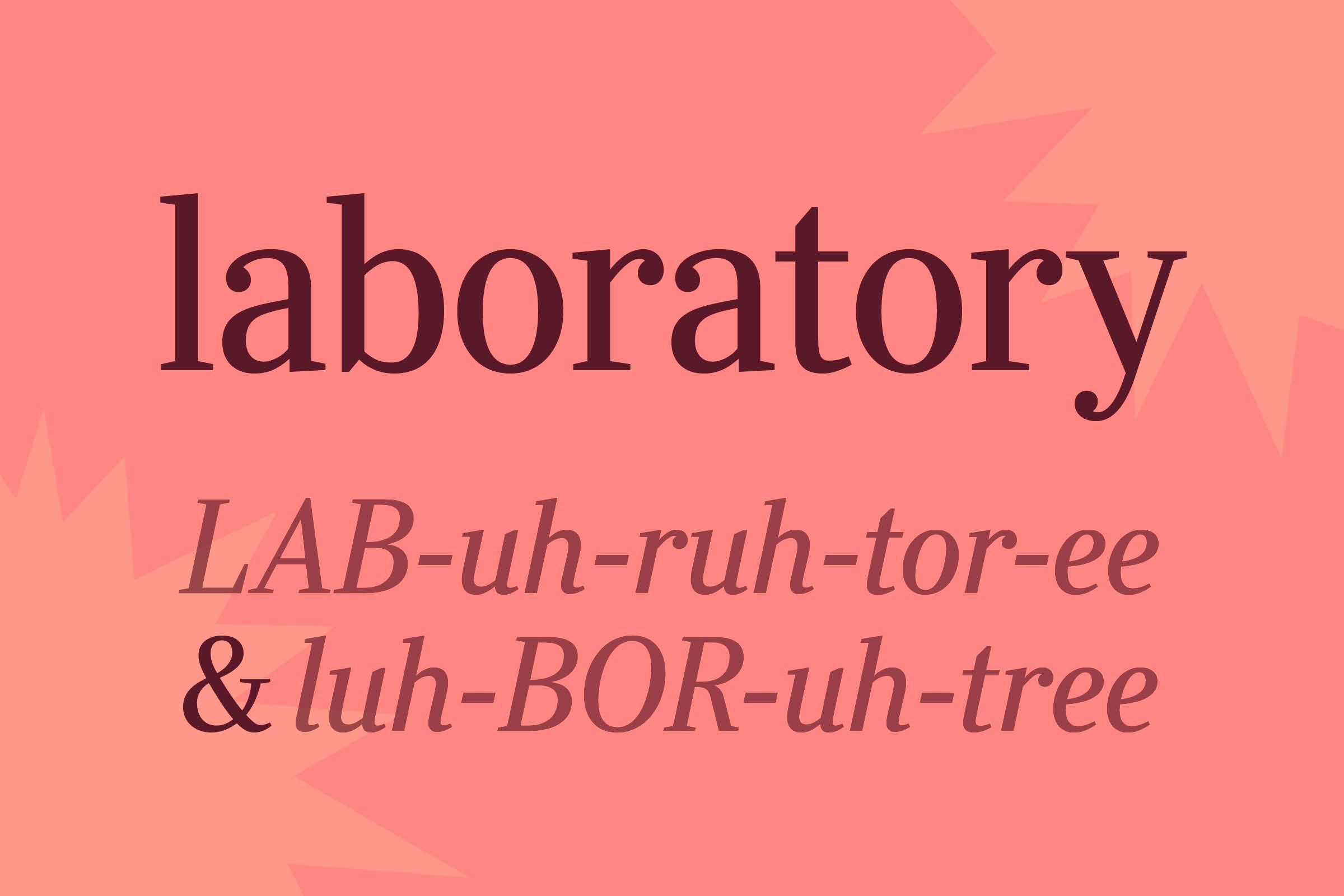 “This is a straightforward British-American pugipron,” shares Elster. “If you’re British, you stress the second syllable: luh-BOR-uh-tree. If you’re American, you stress the first syllable: LAB-uh-ruh-tor-ee.” This is similar to other words that Brits pronounce differently, such as “aluminum” and “vitamin.” Or even letters—find out why Americans say “zee” and Brits say “zed.” 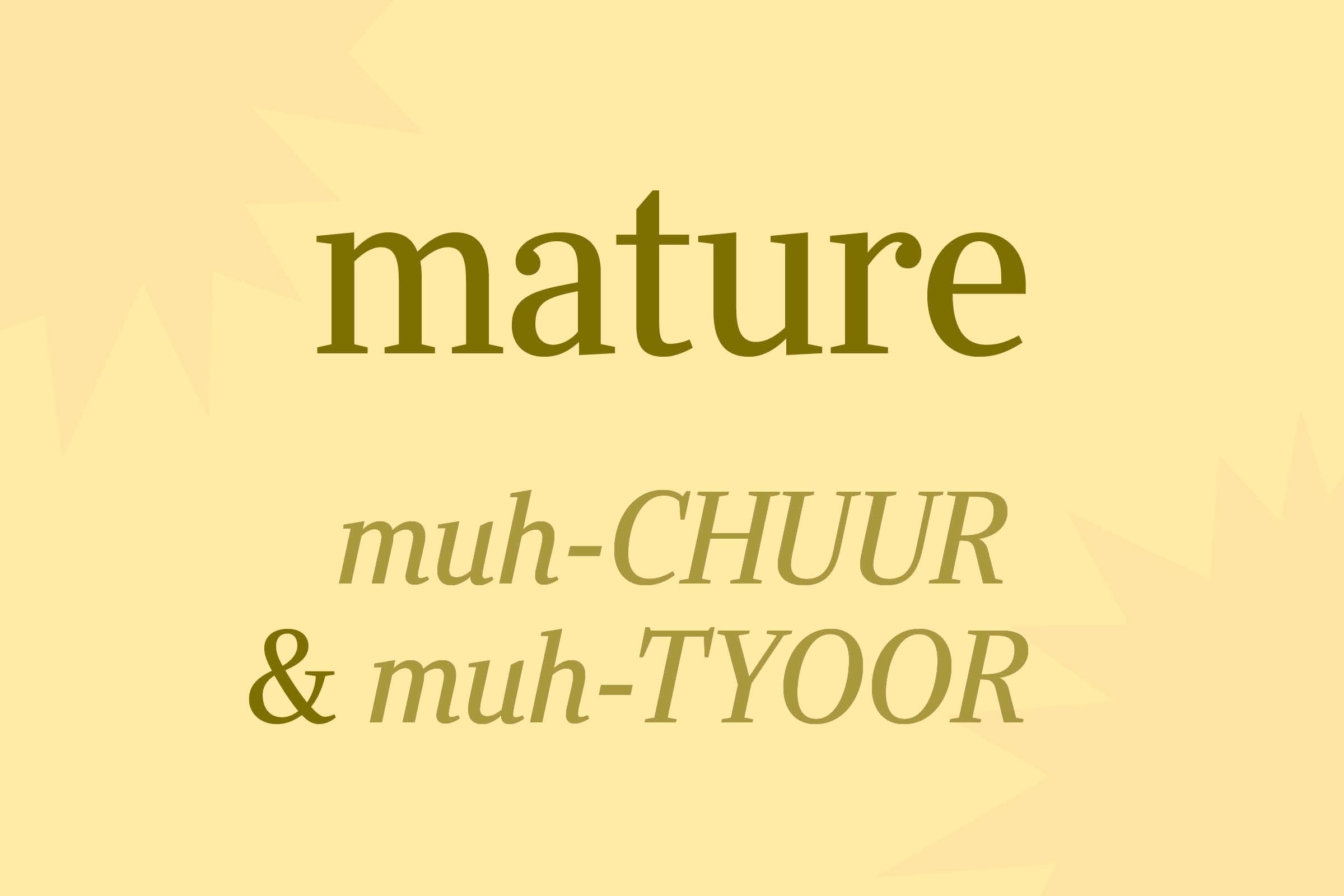 “You can say muh-CHUUR (rhymes with ‘a fir’), muh-CHOOR (rhymes with ‘manure’), muh-TUUR (rhymes with ‘a fir’ again), muh-TOOR (rhymes with ‘I’m poor’), and muh-TYUUR, or muh-TYOOR (which rhymes with ‘unsure,’ depending on how you pronounce that word, with /-ur/ or /-oor/,” Elster rattles off. “The pronunciations with /t/ were long preferred and the ones with /ch/ were long derided, but since at least the 1980s the /ch/ pronunciations have prevailed and been sanctioned by dictionaries and usage commentators. ” Ultimately, it’s best to stick with the options of muh-CHUUR or muh-CHOOR. Don’t miss these 15 common words that used to mean completely different things. 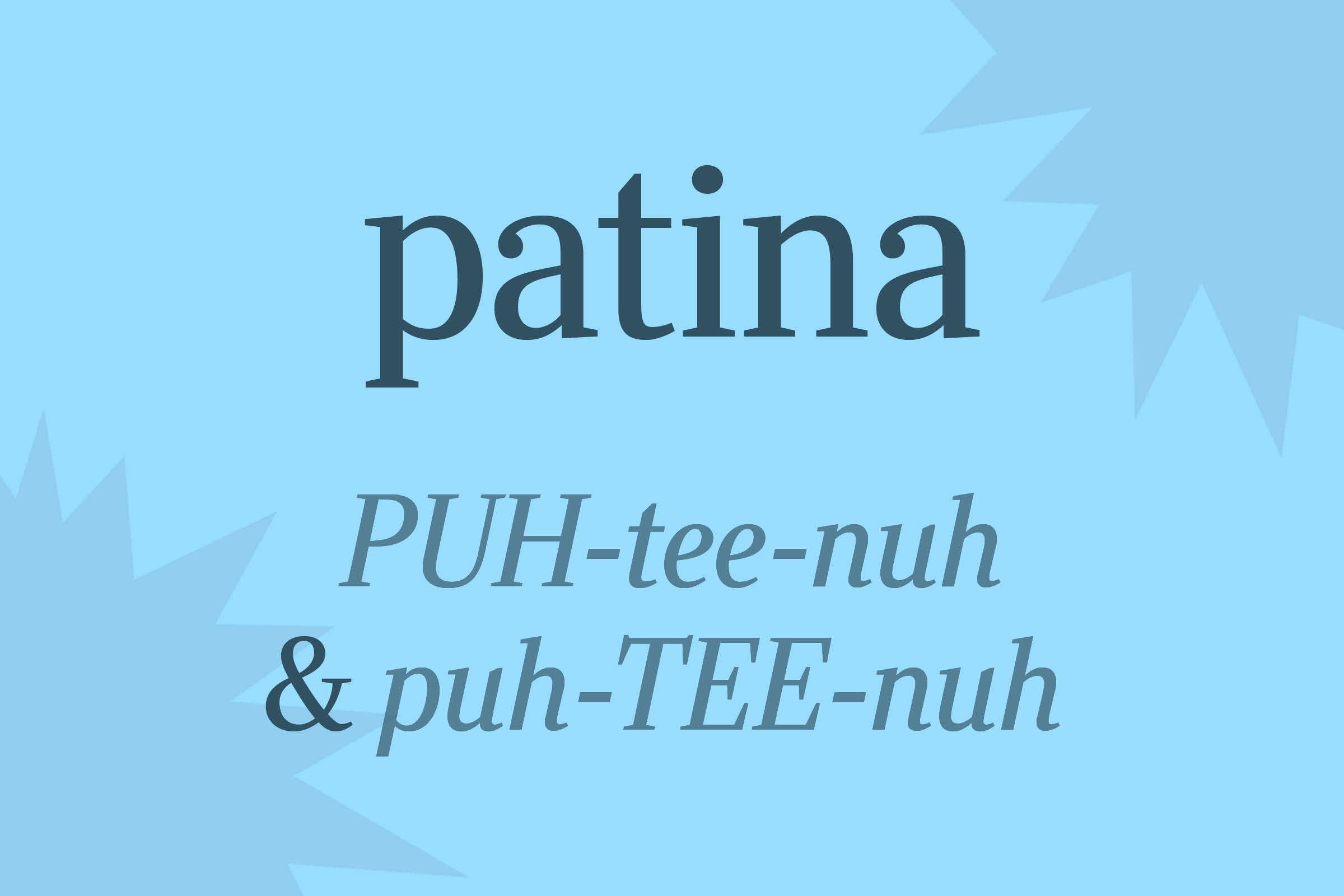 To explain this puzzling pugipron, Elster poses a question: How do you pronounce “stamina” and “retina”? With the accent on the first or second syllable? He shares, “These words, along with ‘patina,’ come from Latin and all traditionally have their accent on the first syllable. The sham-refined variant puh-TEE-nuh is a vogue pronunciation that arose in the 1950s and, unfortunately, is now probably the dominant American pronunciation.” So either pronunciation works, but it’s technically more correct to stress the first syllable. These are the grammar rules your English teacher lied to you about. 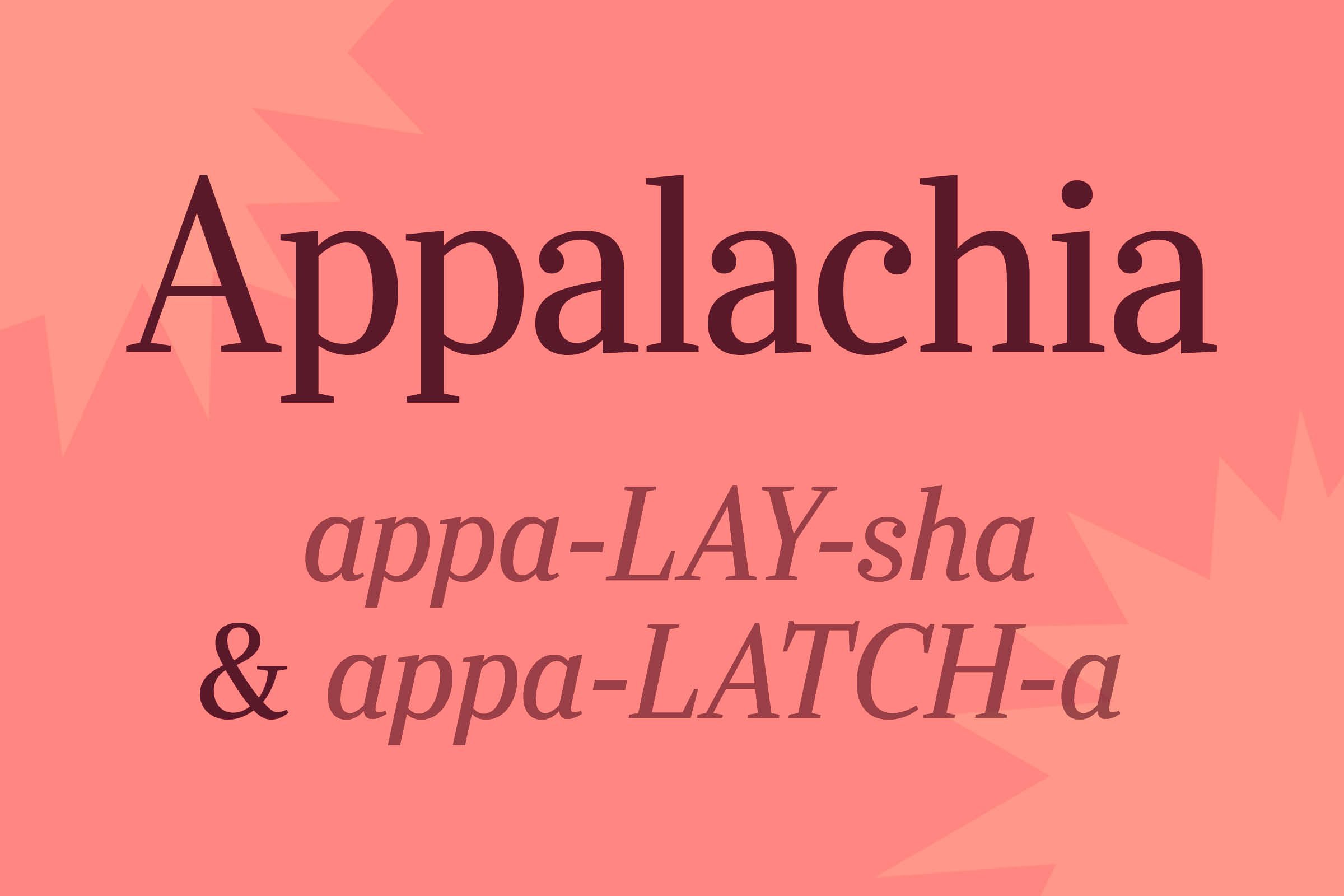 This large American region has two proper pronunciations and which one you’re more likely to choose depends on where you’re from, according to Elster. “Are your speech influences from above or below the Mason-Dixon line? If you’ve been reared somewhere north or west of mid-Virginia, you’re likely to pronounce the third syllable like ‘lay.’ If you hail from a place where okra is considered edible, your preference for that third syllable is almost certainly ‘latch.’ The one thing we can agree on is that the /-ch-/ should be pronounced as in ‘church’ and not with a pseudo-French /-sh-/.” Pronounce these 12 words and we’ll tell you where you’re from. 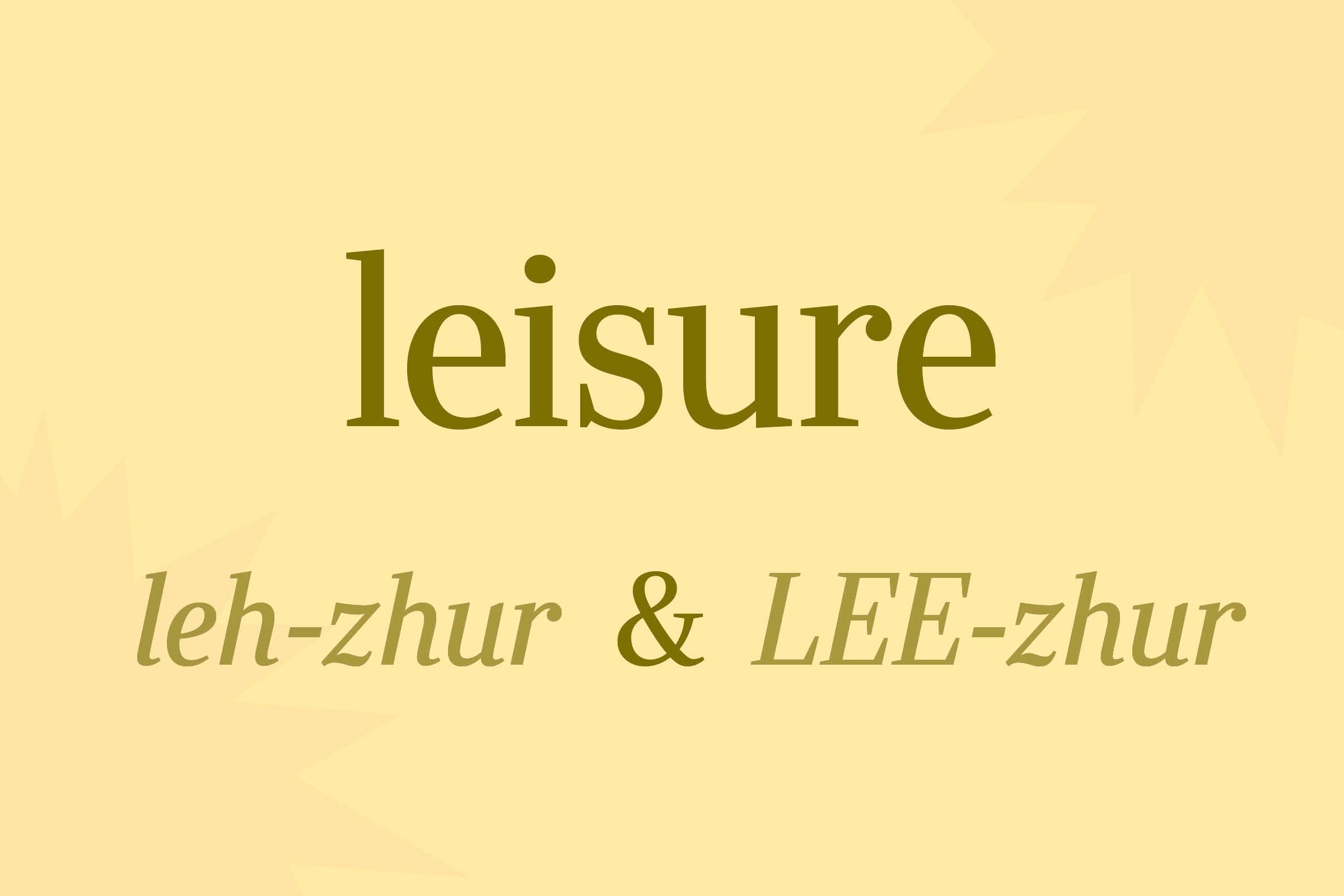 Though the Brits and many Southerners rhyme this word with “pleasure”, Elster differs, and prefers to rhyme it with “seizure.” He adds, “Even a lot of British commentators, along with Anglophilic American commentators, have given priority to LEE-zhur, and it is unquestionably the preferred American pronunciation.” 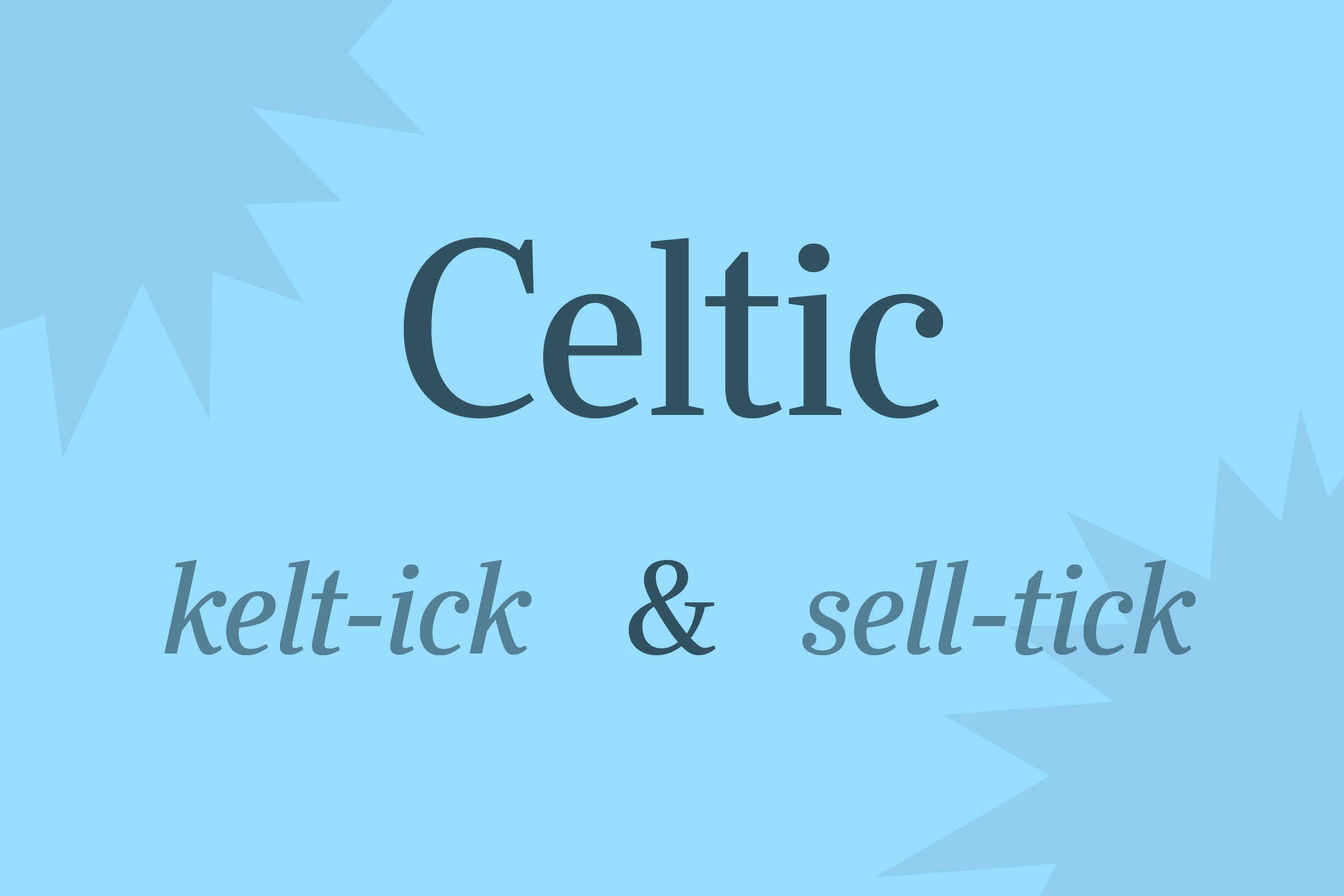 “If you pronounce this with a /k/ sound for the /c/, you are imagining that you are affecting some kind of native pronunciation,” he says. But “Celtic” actually comes from Latin through French, and it came to English with the French /s/ sound for the /c/. The widely popular reinstitution of the /k/ sound for the /c/ is actually just a pseudo-pedantic resurrection of the classical Latin /k/ for /c/ and an obsequious nod to the archaic spelling “Keltic.” He adds, tongue in cheek, “Not that this argument will make a bit of difference, because these days anything but a /k/ in ‘Celtic’ in any context (except for the Boston basketball team and a Glaswegian soccer club) will induce derision and perhaps violence.” Next, brush up on the true meanings behind these 24 commonly misused idioms.

Katy Spratte Joyce
Katy is a freelance food, travel , and business writer who splits her time between her Minnesotan homeland and her new base in Omaha, Nebraska. Besides Eating Well, she has written for Thrillist, Eater Twin Cities, Chilled Magazine, ROVA Magazine, Travel Awaits, Popular Science, Crunchbase News, Omaha Magazine, and many more print and digital publications.