"Revealing the past, enriching the future"

The Pequot Museum is one of the best-kept secrets in New England, a hidden gem tucked away in the corner of Connecticut. The Pequot Museum offers a glimpse into the past, and an optimistic vision of the present and the future. Our unique position as the largest Native American museum and research center allows us to provide the most faithful representation of early history to as large and diverse of an audience as possible. The Pequot Museum is always optimizing exactly how to best be a platform for contemporary Native voices. Simply put, everyone is welcome and you feel that at the Pequot Museum. The story below is about how this museum helped another in a time of great need.

The below story was reprinted with permission from The Day, where it originally appeared.

The water from Whitford Brook was rising fast on March 30, threatening the historic collection at the Indian and Colonial Research Center, which houses a trove of centuries-old records and artifacts.

When it became clear the water would reach the building, center president Joan Cohn and a few helpers moved collections — one-of-a-kind genealogical and historical records of local Indian and colonial history — stored on low shelves and in the bottom drawers of file cabinets to the front of the building, which is a few steps higher than the back.

The water was 17 inches deep when the flooding that devastated Old Mystic started to subside, and while nothing was soaked, everything was damp, leaving the documents and artifacts susceptible to mold and mildew. Cohn called the only people she could think of with the resources to save the historic collection: the Mashantucket Pequot Museum and Research Center.

They wasted no time. The day of the flood, with neighboring buildings still under water, Jason Mancini, a senior researcher for Mashantucket museum, and a crew of about a dozen moved almost all of the ICRC’s collection to climate-controlled facilities owned by the Pequots.

“Everything was immediately unpacked and the goal was to expose everything to air to get rid of any residual dampness,” said Betsy Peterson, who oversees the Mashantucket museum’s library and archives. “We had help from our archeological staff so we had a lot of hands working on this.”

Now, the ICRC’s collection is spread out in an empty office and among the library’s stacks, where documents and relics are drying out in rooms where humidity, air circulation and temperature are monitored. So far, no mold or mildew has developed on the rescued items.

“This is kind of really low-tech but it’s just what you would want to do,” said Douglas Currie, the museum’s head of conservation. “We just had to spread everything out. … You only have a matter of 72 hours to really hit the ground. If it had stayed there (in Old Mystic) until after Easter weekend, you’d really have mold like crazy.”

Seeing the ICRC collection on Thursday for the first time since the materials were evacuated from Old Mystic, Cohn was impressed by how well the museum staff responded to the crisis.

“What a job they’ve done,” she said. “This is just amazing that you were able to come to our aid like this. Otherwise, I don’t know what we’d do.”

Kimberly Hatcher-White, the museum’s executive director, said the Mashantuckets were happy to help the ICRC, which she said was a vital resource as the Pequot tribe started building its collection and working to develop its museum.

“We think it’s just our responsibility as museum professionals to do whatever we need to do, and we’re happy to help,” Hatcher-White said. “As far as we’re concerned, Joan (Cohn) and the ICRC have been stewards of collections that have proved valuable to us for years. It’s a great repository of history.”

Mancini, the researcher who helped coordinate the ICRC’s evacuation, said the center preserved a segment of history that is often overlooked.

“It’s one of the unparalleled collections in terms of 20th century tribes,” he said of the ICRC, which was founded in 1965 by Eva Lutz Butler, a prominent local historian.

Until the ICRC reopens, the collection will not be accessible to the public. Although the genealogical and historic material is safe, the building that housed the material is in bad shape.

Cohn said she estimates repairs will cost more than $66,000. The nonprofit ICRC raises enough money each year to get by, but does not have an endowment.

The facility, which was built in 1856, did not have flood insurance and Cohn is hoping it will get assistance from the Federal Emergency Management Agency.

“We’ll have to wait and see what comes for us,” Cohn said.

Reprinted with permission from The Day. 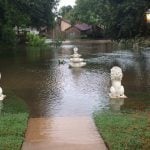