The Nicest Place in Massachusetts: Plymouth

The spirit of Thanksgiving lives on every day here as new settlers are as welcome as the very first pilgrims were nearly 400 years ago.

When folks in Plymouth, Massachusetts, look out their windows, many of them can see Plymouth Rock, the famed placed where the Pilgrims landed in 1620. The neighborhood today is as welcoming as it was then, when the hapless English settlers wouldn’t have lasted the winter if not for help from the natives.

When Michelle Kelly moved into a new neighborhood following the tragedy of her sons’ father’s death as well as her own recovery from cancer, her large family—seven kids and her husband—were invited to a monthly neighbor dinner.

“This was above and beyond welcoming,” she says of the Thanksgiving-like gesture.

In 2020, the town will be celebrating the 400th anniversary of the landing at Plymouth Rock, and folks who come to visit will learn that kindness is still the prevailing instinct.

Its storied past―Plimoth Plantation, the site of the first Pilgrim settlement, is nestled in the northern part of town, near the water―has fostered a strong bond between its nearly 5,000 residents. They’ve always promoted civic pride and held joyous events commemorating the legacy of the first female pilgrim to step ashore in 1620, as legend has it, Chiltonville neighborhood namesake Mary Chilton. But this year even more celebrations of gratitude are planned. A special website, plymouth400inc.org, counts down the hours and days until the anniversary.

Until then, residents will continue to promote the spirit of Thanksgiving every day.

“We’re a small New England town where people take seriously what families and friendship are all about,” says resident Lea Filson.

This is not the usual neighborhood you may imagine, but it is one that has witnessed America at its core every day since the Pilgrims landed in 1620.

We moved here on Halloween 2018 and were almost immediately invited to a neighborhood dinner. This was above and beyond welcoming. Our family had been through some real tragedies including the death of my sons’ father, the surgery that cured my cancer, and then (drumroll please) the sorted and complicated selling of two homes, my husband and I and our blended family with 7 children (ages 17-26). There are always festivities in Plymouth and ongoing improvements but the anniversary of the Pilgrims landing in Plymouth means many, many more that are planned for Summer 2020.

Backyard parties at Lea Filson’s house include neighbors and walkers who are passing by. The yard overlooks Town Brook where the Pilgrims walked every day. Stories are told of history, uncanny happenings in the area, spirits of Pilgrims, and stories of families. Whether it is cookies or koolaid in the afternoon or chicken fingers and spirits in the evening, memories of kind, casual, and comfortable evenings prevail.

Across the street, Lisa Pennington welcomes the opportunity to talk to groups in her side yard who stand on Coles Hill and gaze at Plymouth Bay where the Pilgrims landed. From her side yard, they can see Plymouth Rock and the Mayflower II, an exact replica of the ship. She often answers questions, and sends them further into the historic neighborhood to learn more about the place where American families began.

Carol Bruce loves to plant. She is often seen in LeBaron Alley, next to her beautifully landscaped yard, planting flowers for visitors who walk the same path the Pilgrims walked in the 1600’s. She often hears them talking about the feeling that they can sense the Pilgrims as they walk along.

Ron Filson walks daily up Leyden Street to the National Pilgrim Memorial Meetinghouse which sits where the Pilgrims built their first fort/Meetinghouse. When he finds people outside waiting for it to open, he often rolls open the 1800’s doors and brings them in early. Every Sunday the congregation that descends from the oldest spiritual location in America worships in the Meetinghouse, welcoming all who enter.

Today, most of the houses date the early 1700’s which means they were standing during the Revolutionary War; they were listening when Paul Revere made his ride; they watched rejoicing after the signing of the Declaration of Independence; they mourned the loss of soldiers during the Civil War; and on and on. In what other neighborhood can Americans join with the residents and learn their own history and from where many of their beliefs come? In what other neighborhood are there signs on historic houses that show the names of the Pilgrims who lived at those locations?

Leyden Street in the historic district is a minute’s walk to Plymouth Bay where the calls of seabirds pierce the sky. Walking along the bay are neighbors who share secrets, mark family milestones, discuss vacations, and simply share longterm friendships. Some walk in the morning as the sun is rising with a yellow orange warmth. Others walk during the afternoon when visitors and residents alike are looking out and imagining the Mayflower as it heads into the bay. In the evening as the sun goes down, the quietness of the neighborhood, and the sound of the waves allows one to review the day and plan for the next in this quaint New England town.

At the top of Leyden Street is Town Square where the Meetinghouse overlooks the activities that have occurred here since 1620. Events there have been both good, bad, happy, and sad. From hangings, to weddings, to lighting the town tree at Christmas, to Native American days of mourning, it is witness to all the events that drive the species we call humans. Racers run by on Court Street, which intersects Leyden, merchants put out their wares every morning in anticipation for the guests that the historic district will welcome. Antiques are placed on the sidewalk in the sun, or pulled back inside during a rain.

Leyden Street is on a steep hill that empties down at Plymouth Rock. Walkers huff and puff their way up, stopping to read the signs on the historic houses as they catch their breath, then slowly and comfortably walk down the street after soaking up the history. Leyden Street is a reflection of America, with its school children walking by, with the coffee shared by neighbors while looking out at the bay, with residents raking and hosing the area to keep it clean, with the way everyone looks out for one another. To enjoy where American families began, and to feel the energy and history that has transpired here, residents come and seldom leave.

Each year groups of people in Pilgrim attire walk by in a procession called Pilgrims Progress, but one day, a resident saw a young boy walk by her window dressed as a Pilgrim. She went outside to watch the procession but there was none. She turned to see the boy disappear before her eyes.

Another resident is greeted each morning through the screen in her open window by a songbird that wings in place and stares at her as if it is trying to speak to her. This has happened daily for years. She now looks forward to greeting her friend each morning.

As 2020 approaches, everyone on Leyden Street knows that the street will be teeming with the famous and not so famous as they travel here to commemorate the 400th anniversary of the Mayflower voyage. They know the slow, quiet smaller groups may go away for a year, but no one cares. Everyone will share this special place in history with their guests and when the crowd recedes, they will go back to sharing with each other and the smaller groups that will continue to visit. We all feel this is just the best neighborhood in America.

What do you think of The Nicest Place in Massachusetts: Plymouth? 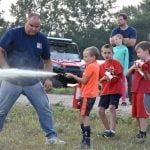