As we approach Black Friday, Cyber Monday, and oh yeah, Thanksgiving, I like to spend some of my downtime catching up on all of the great reading I’ve been putting off. 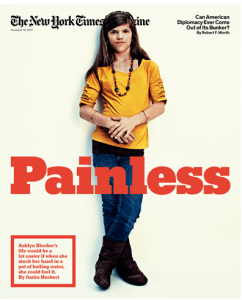 As we approach Black Friday, Cyber Monday, and oh yeah, Thanksgiving, many of us will enjoy some much-deserved time off (and pecan pie). After the turkey is eaten and the football games watched, I like to spend some of my downtime catching up on all of the great reading I’ve been putting off. Here’s what’s on my list:

1. “The Hazards of Growing Up Painlessly,” by Justin Heckert (from the New York Times, November 12, 2012): “The girl who feels no pain was in the kitchen, stirring ramen noodles, when the spoon slipped from her hand and dropped into the pot of boiling water. It was a school night; the TV was on in the living room, and her mother was folding clothes on the couch. Without thinking, Ashlyn Blocker reached her right hand in to retrieve the spoon, then took her hand out of the water and stood looking at it under the oven light. She walked a few steps to the sink and ran cold water over all her faded white scars, then called to her mother, ‘I just put my fingers in!’…”

2. “Tunnel Vision,” by Megan Michelson (from Outside, November 2012): “When the avalanche ripped, there was no sound—no rumbling, no snapping of trees, no screams from any of the seven people who’d just skied the untracked 42-degree slope off the back side of Washington’s Stevens Pass resort. I watched as my friend Jim Jack, 46, dropped in and crested a roll in the terrain. That’s when the snow cracked in a concave line two feet deep and 30 feet wide, shattering into blocks that began to tumble slowly before picking up speed. Lower, beyond where I could see, the slope fractured again, dislodging another sheet of snow into a steep, narrow chute more than a thousand feet below us…”

3. “The Man Who Charged Himself With Murder,” by Jennifer Gonnerman (from New York, November 18, 2012): “Late on the night of December 15, 2010, Trevell Coleman stepped out of the subway station at East 116th Street. The evening was bitterly cold, down to almost 20 degrees. He wore a North Face parka and a scarf wrapped around his head like a hoodie. He’d told nobody where he was going—not his mother, not his friends, not his relatives—because he knew they’d try to stop him…All that matter[ed] was what he’d done half a lifetime ago, in the fall of 1993, when he approached a man late one night, fired a gun, then fled. He never knew where the bullets landed or what became of the man. And after seventeen years, he decided he needed to find out exactly what he’d done…”