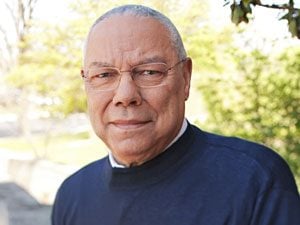 Photograph by Martin H. Simon
In his new book, It Worked for Me: In Life and Leadership, Colin Powell reflects on the wisdom he’s gained from his years of public service and the values that sustained him in tumultuous times. One way to see the greatness of our country, he believes, is through the eyes of young adults who come to America as part of student-exchange programs. They notice things we overlook, and they are amazed by the kindness and generosity that we sometimes take for granted. Here he shares some funny and moving memories, beginning with a program he launched in 1997 with the United Kingdom. It worked like this:

I would find two young Americans to spend time with the Foreign and Commonwealth Office in London, and the late Robin Cook, who was then the U.K. foreign secretary, would send a pair of young Brits to hang out with my staff. It worked great, and it was fun for me to check on how the kids were managing to wrap their brains around our vast, complex, and strange organization. It was especially fun on their last day when I’d bring the youngsters into my office and let them phone their “mums” back in the U.K. After they and their parents had rattled on awhile, I’d take the phone for a minute and chat with the parents, which always pleased everybody.

The program continued under Jack Straw, Robin’s successor. By then, a way to improve it had come to me. “We both go out of our way to pick kids who are over-achievers and professional winners,” I told him. “Maybe you could send a couple who are not on their way to Oxford or Cambridge?”

He got it! Did he ever! He sent two young men who were not college-bound and came with all kinds of troubles behind them. They’d had run-ins with the law. They’d been busted for drugs. Their dress was not Savile Row but council housing (public housing).

During their two-week stay, they met important people, visited our monuments, and spent a day with me. I took them to meetings at State and even to a congressional hearing. They saw what a secretary of state actually does for a living. That afternoon, I took them to the White House, and we wandered around the fabulous 18 acres. When we got to the Rose Garden, I suggested that we check to see if the president was in the Oval Office. If he was out, we could see it. Surprise, surprise—I had called President Bush earlier and explained that I was bringing these boys with their troubled histories to the White House. I knew he would be in. 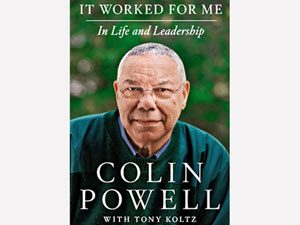 We walked past the receptionists and right into the Oval Office, and there was President Bush waiting for us. The boys were amazed. There was small talk to break the ice. And then in a moment I will never forget, President Bush talked briefly but openly about his own onetime alcohol addiction and how he had overcome it and gone on to create a new life, which eventually led to the Oval Office. After we left, I took the two speechless young men back to my office. Their lives were changed. Back in Britain, they spread the word about this marvelous experience and the wonderful, kind, and generous people they had met.

The State Department has several youth-exchange programs. One of them, Youth Ambassadors, began in Brazil and was then exported to Argentina, Chile, Paraguay, Uruguay, and throughout the region. High school students come to the United States for a few weeks, meet important people, see the sights, and take their impressions home.

In the winter of 2002, I received in my office a group of Brazilian YA students. We had a nice chat, but I could tell they were edgy. It had started to snow outside … their first-ever snowfall. Since getting outside in the snow obviously seemed far more exciting than spending time with me, I let them go early.

Maybe a year later, I made a trip to Brazil. Curious about how the program had affected those kids, I asked our ambassador, John Danilovich, a great guy, to round them up so I could chat with them.

John located them, and we assembled in the backyard of his residence. The kids filled us in on their lives and their plans for the future. Since they were a highly select group, they had expectations of future success—like owning companies or becoming their country’s president. I asked them if they had enjoyed the United States. I wanted to know if anything had surprised them or made them especially happy or especially sad.

There were some questioning looks, but that didn’t last long—they were teenagers.

A young man raised his hand. “One day we were having lunch at a school,” he said, “and I was surprised, very surprised, when the American students laughed at me because I put ketchup on my pizza.”

“Most Americans think pizza comes with a sufficient quantity of tomato paste,” I explained kindly, doing my best not to smile.

Another young man quickly followed up. “I couldn’t believe,” he said with an expression of comic disgust, “that they served milk with pizza.”

I again suppressed a smile. Time didn’t permit an exposition about the place of the dairy lobby in the American political system.

Then a young girl tentatively raised her hand. “Let me tell you what happened to us in Chicago,” she said. 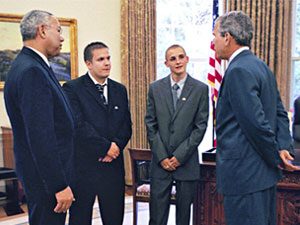 Courest Eric Draper/George W. Bush Presidential Library
“After a day of sightseeing, we went to a neighborhood restaurant,” the girl explained. “I think it was an Outback Steakhouse. After we ate and the check came, we added up our money. We were short. We weren’t used to paying with dollars. We couldn’t pay the bill.”

There they were, a dozen unchaperoned Portuguese-speaking kids in a chain restaurant in Chicago imagining all the horrors that could befall foreigners who can’t pay. When the waitress came back, the kids told her that they couldn’t cover the check. She looked at them, gave a nod, and went away. They didn’t know what to expect.

A few minutes later, she came back. “Don’t worry about the check,” she told them with a warm smile.

“Will you have to make up the difference?” they asked, worried.

“Oh, no,” she said, her smile broadening. “When I told the manager about your problem, he picked up the whole bill and gave me a message for you: ‘I’m glad you came to our restaurant and hope you enjoyed the meal. I’m glad you’re in our city and hope you enjoy your stay in America.’”

They were stunned. They never expected such kindness.

When the girl ended her story, the others remained silent. It had been a powerful experience for all of them. We had introduced them to congressmen, Cabinet secretaries, and other dignitaries, but a restaurant manager in Chicago made the strongest impression on them and gave them their most enduring memory of America.

Another young lady raised her hand. “We were boarding the plane to leave Chicago,” she said. “After I sat down, a woman got in the seat next to me. ‘Excuse me,’ she said. I was confused. ‘Why?’ I asked. ‘Well,’ she said, ‘I brushed against you when I took my seat. I hope I didn’t disturb you.’

“I’ll never forget that,” she said.

A simple courtesy that most of us would have forgotten before the beverage cart rolled down the aisle left an indelible impression on a young Brazilian girl. It’s hard to say why. Maybe she didn’t expect such obvious niceness here, or maybe she wasn’t used to that kind of gesture in Brazil. Whatever the reason, the moment has stayed with her.

When they returned home, the YA alumni appeared on Brazilian media and became multipliers of goodwill, especially to young people. There are now alumni in every Brazilian state.

None of the Young Ambassadors have so far become corporate big shots or their country’s president. But a few, like a student named Casio, stand out.

When Casio returned to his small town, he decided to share his experience. “I realized the secret of my success was my mastery of English,” he told Danilovich, our ambassador. So Casio started his own language school called Backpack.

“Branding is important,” Casio said. “You have to have a name they will remember.” He marketed his school on his own website and then went to the mayor of his town. “I’m going to start a language school that will help our town’s young people,” he told the mayor. “You should give me books for them.” The mayor gave him books.

When Ambassador Danilovich heard this story, he realized that the embassy could help too. And the embassy also gave Casio books.

Later, YA alumni who got into the University of Brasília began an entry-exam preparation program run by Casio to help economically disadvantaged students prep for the rigorous entry exam. The program charged ten reals, or about four dollars, for a semester of classes. “You cannot give it to them for free,” Casio explained. “They won’t appreciate it if it’s free.” Casio will have a brilliant future in marketing.

The YA success is a State Department success (it breeds lots of goodwill), but it’s much more than that. It’s an American people success. Our own people are our best ambassadors and promoters.

You never can tell what kids are really seeing (much less control it), but they are always seeing and always judging. If we can provide them with rich enough experiences, they’ll take away something good that they can use to make their own and other peoples’ lives better.