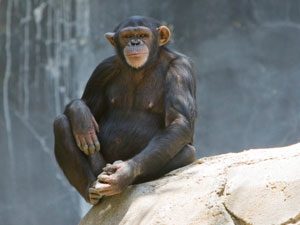 Santino, a feisty male chimpanzee at the Furuvik Zoo in Sweden, is known for throwing rocks at zoo-goers who ogle him a bit too long. But recently Santino shocked his handlers when he developed a new, almost-human technique for attack. According to Discovery News, Santino decided to move a clump of hay near the visitor’s section and place rocks beneath it when no one was watching. Then, he sat on the pile. As soon as the visitors got close enough, he reached into the straw decoy, and began firing away. Researcher Mathias Osvath, lead author of a paper about Santino in PLoS ONE, claimed that calculated moves such as Santino’s display advanced thinking typically found only in humans.

See the photos of Santino in action »

Could this lead to a real-life Planet of the Apes? Who knows. Unless the Portland Zoo tiger gets the memo, or the Henry Doorly Zoo lion in Omaha below.

What Christopher Robin Really Thought of Winnie the Pooh