Thanks to the kindness of strangers, these precious lost objects were returned to their rightful (and thankful) owners.

Lost: A Wallet Belonging to a Soldier Headed Home

It was the night before he was supposed to fly home. Without realizing it, American solider Chad Reid dropped his wallet on an Afghanistan street, losing his credit cards—and his all-important military I.D.

Found: Luckily, civilian aircraft mechanic Bill Peasley was looking down at just the right moment as he walked to dinner that night, and he spotted the wallet. After phone calls to Reid’s mother in Denver and grandfather in Pennsylvania, the the two men used Facebook to coordinate in the few hours Reid had left before his plane. Reid got his wallet back just in time to board his flight back to the States.

Montreal residents Shoshana and Dez thought their priceless photos of New York City were gone forever after they lost their digital camera’s memory card during a 2008 trip. They posted an ad on Craigslist, but nothing turned up.

Found: The couple was shocked when the memory card arrived in the mail—three years later. Kelly Sullivan, a Museum of Modern Art attendant who was working the day Shoshana and Dez visited, had noticed the tiny memory card on the museum floor. She posted the photos to ifoundyourcamera.net, where Nicole Backs, a student in British Columbia stumbled on them while idly looking through photos. Backs had recognized Shoshana as a friend of her mom’s, and the card made its way back home. “What were the odds?” said Backs. 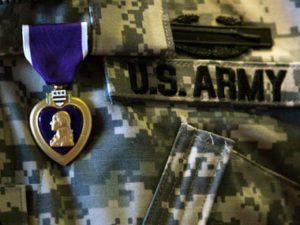 Rocco DiNobile, manager of a West Hollywood apartment building, recently found a shocking trove in a laundry room locker: a 70-year-old box of military medals, including a Purple Heart and a Silver Star.

Found: From the paperwork in the box, DiNobile figured out that the medals belonged to former tenant Celia Markel, whose husband Hyman had died protecting fellow soldiers from enemy fire in 1945—while she was pregnant with their daughter Hyla. With the help from Purple Hearts Reunited, DiNoble returned the hero’s missing medals to his daughter. “[The medal] just confirms what a great man my father was,” she said.

Amy Harris saw in the shallow water along the bank of Redfish Lake in Idaho wasn’t a bolt, as she suspected—it was a gold wedding band. She posted her find on Craigslist, but when no one had claimed the ring four months later, she all but gave up finding the owner.

Found: As a last-ditch effort, Harris’s husband Jody called his old friend, Richard Black, a jeweler in the next town, for advice on what to do with the ring. Black asked, “Did you find it in Redfish Lake?” The surprised couple found out that Alair and Dana Schroeder had recently stopped by Black’s shop—to buy a replacement for the ring Alair lost that summer at the lake. The same ring! Harris dropped off the band at Black’s shop, and, by Thanksgiving, Alair had her ring back.

The day after Hurricane Sandy hit the shores of New Jersey, teen Patrick Chaney spotted a small battered box near his home in Atlantic Highlands. Inside the box were 57 love letters, written by Dorothy Fallon to her boyfriend Lynn Farnham more than 70 years ago. Chaney dried the letters in front of his family’s fireplace. Unsure of how to find the letters’ owners, his mother Kathleen posted a message on findagrave.com.

Found: Miraculously, Shelley Farnham Hilber saw the note and contacted the Chaneys. Turns out Dorothy and Lynn married in 1948 and Lynn died in 1991—Hilber was their niece. Dorothy is still alive and lives in a New Jersey nursing home. “It’s…wonderful to have a peek into what it was like [for them] to be 19,” says Hilber.